At an electric Commerzbank-Arena, Eintracht Frankfurt and Chelsea were both looking to gain an advantage going into the second leg. Frankfurt, without Ante Rebić and Sebastian Haller, were looking to continue their impressive home form in the Europa League. While Chelsea were as offensive minded as ever, and looked to find an away goal that would put them in a good position going into the second leg. Chelsea, of course, did find this away goal, and could possibly have scored more on the day thanks to an impressive performance against a team capable of doing real damage, as they showed early on.

In this tactical analysis, I will show how Frankfurt started so well with some excellent out of possession work and how Jorginho took control of the game in the second half to guide Chelsea to a pleasing result.

Frankfurt went with a familiar 3-5-2, with a slight variation being the role of Mijat Gaćinović, which is a role I will analyse later as a key role in the game. Chelsea also went with their usual system, unsurprisingly, but without Eden Hazard who was left on the bench. With both Haller and Rebić not available, it was vital that Luka Jović stepped up for Frankfurt and he, yet again, proved his credentials on the big stage. On paper, we can see that if Frankfurt can stretch the play enough and occupy central players, one v ones could be created in the wide areas and this is something which Frankfurt looked to use to create overloads from crosses. 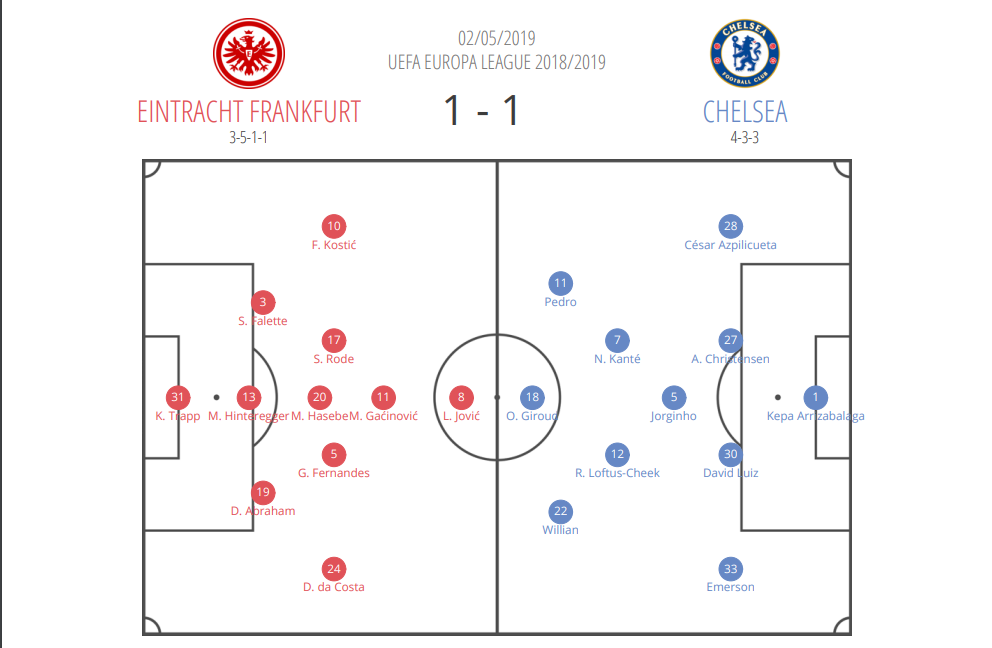 When Frankfurt had possession deep in Chelsea’s half, Gaćinović would become a striker and occupy players in the box, as would some of Frankfurt’s central midfield players depending on the situation. Early on, Chelsea didn’t deal with these situations particularly well as we can see from their structure below. Frankfurt’s overload, in which Emerson has three players making runs around him meaning that Luiz and Christensen should have adjusted their shape and pulled across and deeper, to cut off the cross. Likewise, if every player shuffles across slightly, Luiz can occupy the run Emerson is currently tracking, while Emerson can focus on the back post. It is however extremely difficult to defend this situation and adjust this quickly, and so it’s great offensive work from Frankfurt, who just missed a perfect delivery on a few occasions.

In the situation below, Chelsea defends better by getting closer to the wing back delivering the cross. Jović again occupies the central players and this allows Kostić to drift wide and look to receive the ball at the back post. Rode also makes a good run but Chelsea’s shape makes it difficult to pick him out.

Jorginho struggles in the first half

Chelsea struggled to find Jorginho in the first half thanks to Frankfurt’s excellent pressing and some self-made build up problems for Chelsea.

Gaćinović’s role in the game was centred around limiting Jorginho’s build up play. In the first half he performed this role excellently. Rather than man marking Jorginho every time, he often used a cover shadow while pressing Chelsea’s back line to limit Jorginho’s ability to receive the ball. We can see in the image below Gaćinović goes to press Luiz, but in doing so cuts the passing lane to Jorginho while pressing the ball. This leaves Jorginho no other option but to drop deeper, but Jović and Gaćinović can then adjust their positioning to cut off angles and ensure the ball can’t be played deep either.

When Jorginho chose to get in front of Gaćinović, he was closely marked and Frankfurt were able to create a four-man diamond in central midfield which made their man orientated pressing of Chelsea’s three central midfield players very efficient, with each of Chelsea’s central players able to be marked. We can see below that Hasebe steps out of the back five to become a holding midfield player to form the diamond, and if the ball was played backward by Chelsea, Gaćinović could press with Jović in the manner shown in the image above. This central man orientated press forced Chelsea wide, and Frankfurt’s hard working disciplined midfield were able to defend well.

There were a few occasions, however, where Jorginho had opportunities to help Chelsea’s build-up, but the ball was not played to him. Chelsea improved this in the second half but in the situations like the one below, where Jorginho has escaped the press, Chelsea had to take advantage more often. Azpilicueta decided in this situation below to play laterally, which allows Frankfurt to get closer to Jorginho again.

The main issue in the first half regarding Chelsea’s build-up was Frankfurt pressing Jorginho obsessively as stated. So to find success, Jorginho had to escape this press and did so by dropping deeper and often playing a quarterback type role, which meant Gaćinović did not follow him. In order to follow him, Frankfurt’s whole press would have had to move much higher and after an intensive first half, Frankfurt did not seem to want to press high, instead remaining compact. With this newly found space, Jorginho started to execute some excellent long-range passes which created chances for Chelsea.

Jorginho started to drop directly in front of the back line more and more often and with Frankfurt struggling to get near him, they opted to bring on Paciência and go to a 3-5-2, which allowed for more players to press Chelsea’s back line. This gave Jorginho more space as highlighted, but Chelsea struggled to get the ball to him as Jović and Paciência could press Luiz and Christensen.

Jorginho’s movements to receive the ball between players also began to be recognised more often by Chelsea, with this particular reverse pass taking three Frankfurt players out of this phase of Chelsea’s attack and giving Jorginho acres of space to drive into a pick out a pass.

Both teams impressed but Chelsea will be the happiest of the two sides to get the away goal at what has proven to be a challenging ground to play at, as Benfica will vouch. Jorginho’s second-half performance should have pleased Chelsea fans immensely as this was one of the deciding factors in the game, as his ability to sustain attacks, find space deeper and attract a press from Frankfurt opened up more spaces for his teammates. The tie is far from over though and Frankfurt will fancy their chances of claiming an away goal at Stamford Bridge, particularly with the return of Ante Rebić.