After 10 straight Premier League wins at the Emirates, Unai Emery’s Arsenal finally came unstuck as Crystal Palace came away with all three points in a 3-2 victory over the North London side. This tactical analysis will look at how the home side paid the price for failing to break down Crystal Palace’s stubborn defence. 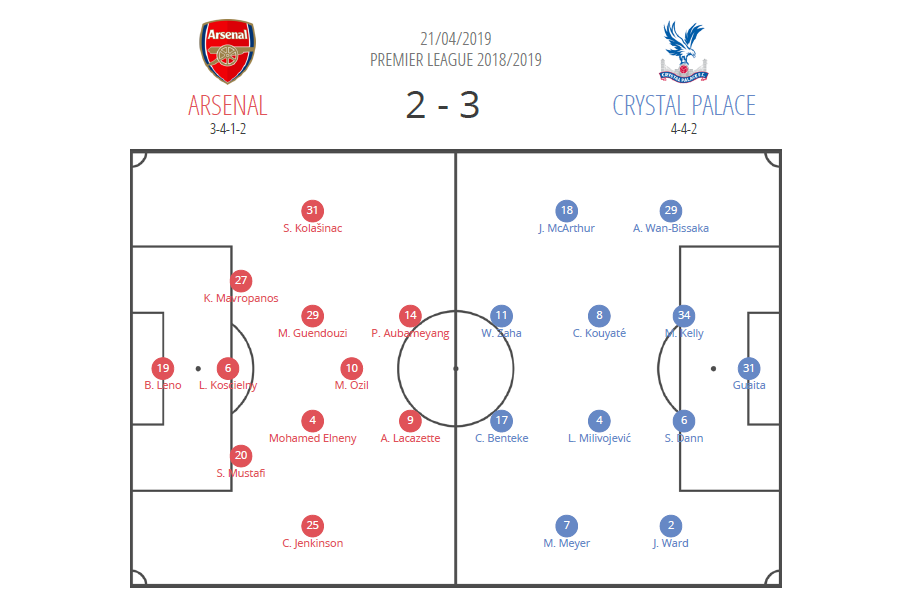 Unai Emery continued with the same 3-4-1-2 shape as used in the 1-0 win at Napoli last Thursday. The Spaniard was forced to make several changes to his lineup, however, with Aaron Ramsey ruled out with a hamstring injury and Granit Xhaka not risked because of a hip complaint. A much-changed midfield saw Mesut Özil return to the number 10 role ahead of Mohamed Elneny and Mattéo Guendouzi as Lucas Torreira dropped to the bench.

The defence also underwent changes as Shkodran Mustafi returned for the suspended Sokratis Papastathopoulos and Greece under-21 international Konstantinos Mavropanos came in for Nacho Monreal.

Palace manager Roy Hodgson made fewer changes to his side who lost 3-1 at home to Manchester City the previous weekend. One of these was forced, as Max Meyer came in for Jeffrey Schlupp, who has been ruled out for the rest of the season after coming off with an ankle injury in the Manchester City game.

Andros Townsend dropped to the bench as Hodgson opted to have more protection on the right-hand side of his four-man midfield with James McArthur covering the space in front of the much-praised Aaron Wan-Bissaka. Palace’s only other change saw Joel Ward come in at left-back in place of Patrick van Aanholt.

It was clear from the way Crystal Palace lined up in their narrow 4-4-2 formation that they had come to the Emirates to keep it tight and that’s exactly what they did right from kickoff.

As Arsenal played out from the back, strikers Zaha and Benteke acted as Palace’s first line of defence. However, their job was not to press Arsenal’s defenders on the ball but to block the passing lanes to their two central midfielders Guendouzi and Elneny.

In the image below, notice how centre-back Shkodran Mustafi finds the central passing lanes blocked and is forced to turn back and play a simple sideways pass to teammate Laurent Koscielny.

It is also evident from the above image how Crystal Palace’s midfield have positioned themselves on the side of the pitch where the ball is. In the image below the entire midfield four have shifted to the right-hand side in a tight block with very little space between them. This also made it very difficult for Arsenal to get the ball to their wing-backs in advanced positions. 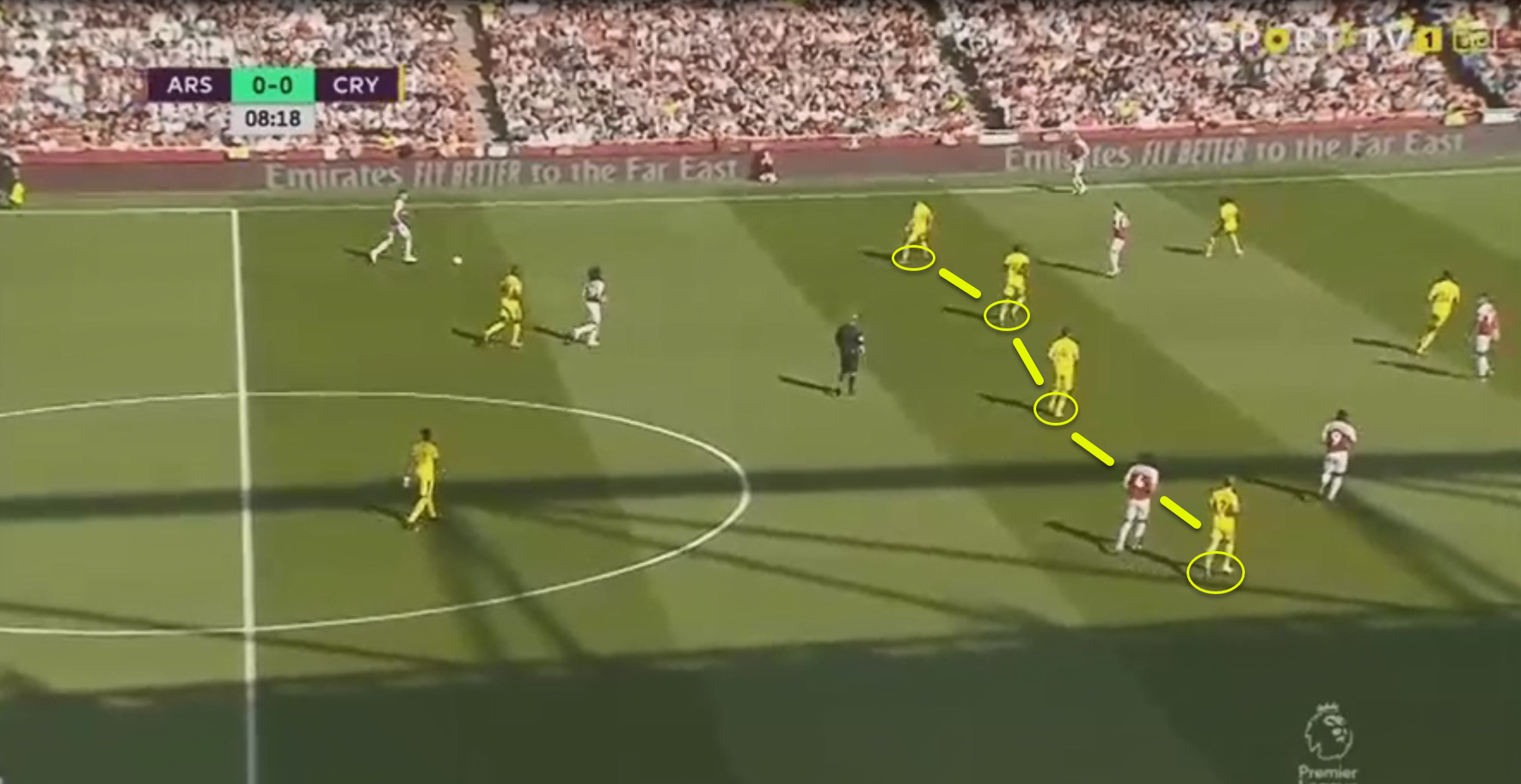 The natural weak spot when defending in this way is that it leaves a lot of space on the opposite side of the pitch, leaving you vulnerable to diagonal passes and quick switches of play. But this is something that Arsenal’s players did not seem able to do very often.

This was partly down to the fact that Arsenal played with a lack of urgency collectively and partly down to a lack of awareness on the part of individuals, especially the central midfield pairing of Elneny and Guendouzi. In this next image, striker Lacazette looks up and notices Sead Kolašinac (circled) calling for the ball.

Seeing as there are so many bodies in the way, he passes to teammate Elneny who is in a better position to play the pass. Here Elneny should be opening up his body in order to receive the ball on his left foot and play the pass to Kolašinac in space. 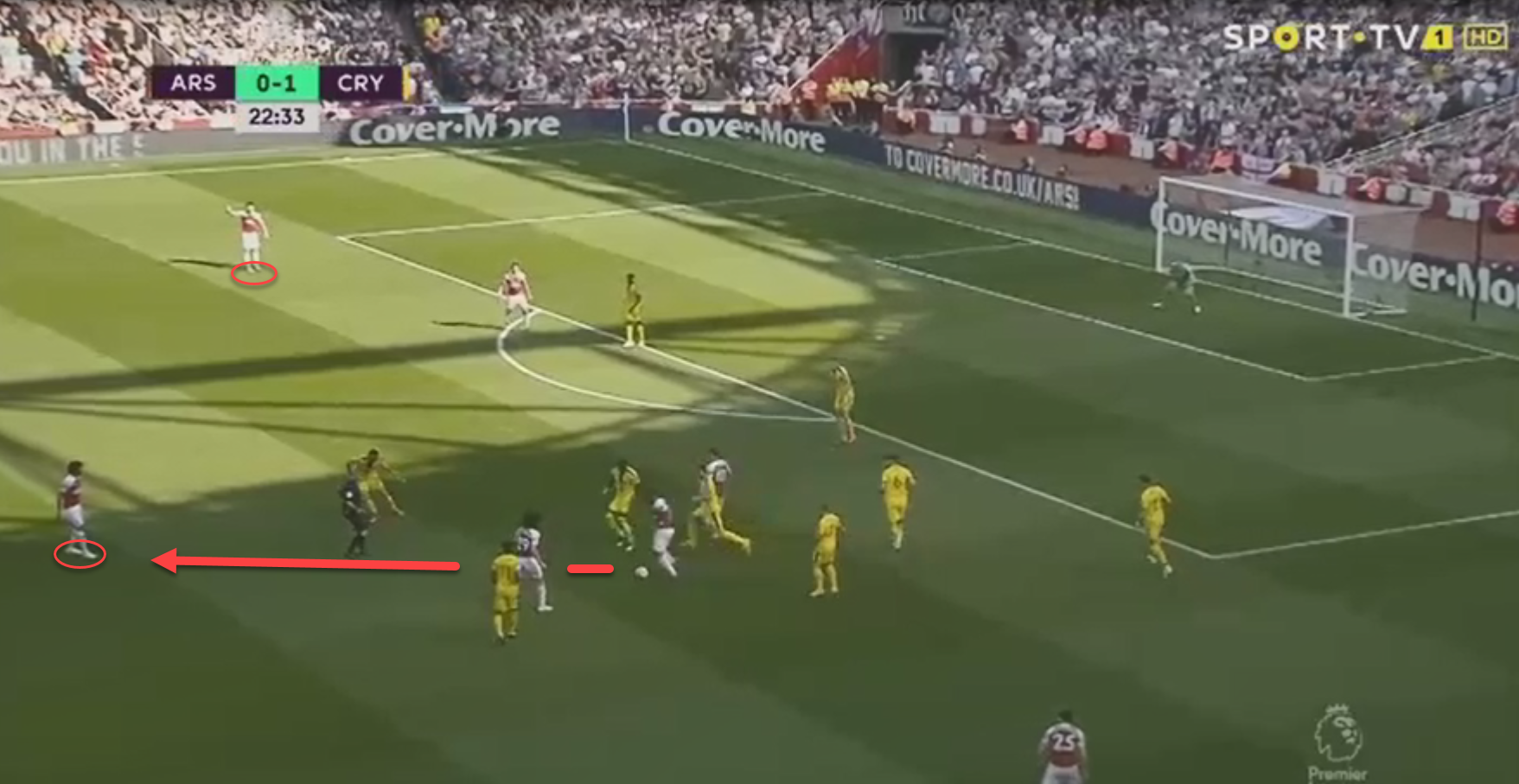 However, as we seen in the next image, Elneny instead takes the ball on his right foot in order to play a safe pass back to Mustafi. What is remarkable here is that Crystal Palace midfielder James McArthur (circled in yellow) was aware of the space behind him and had already turned to start his run over towards Kolašinac. 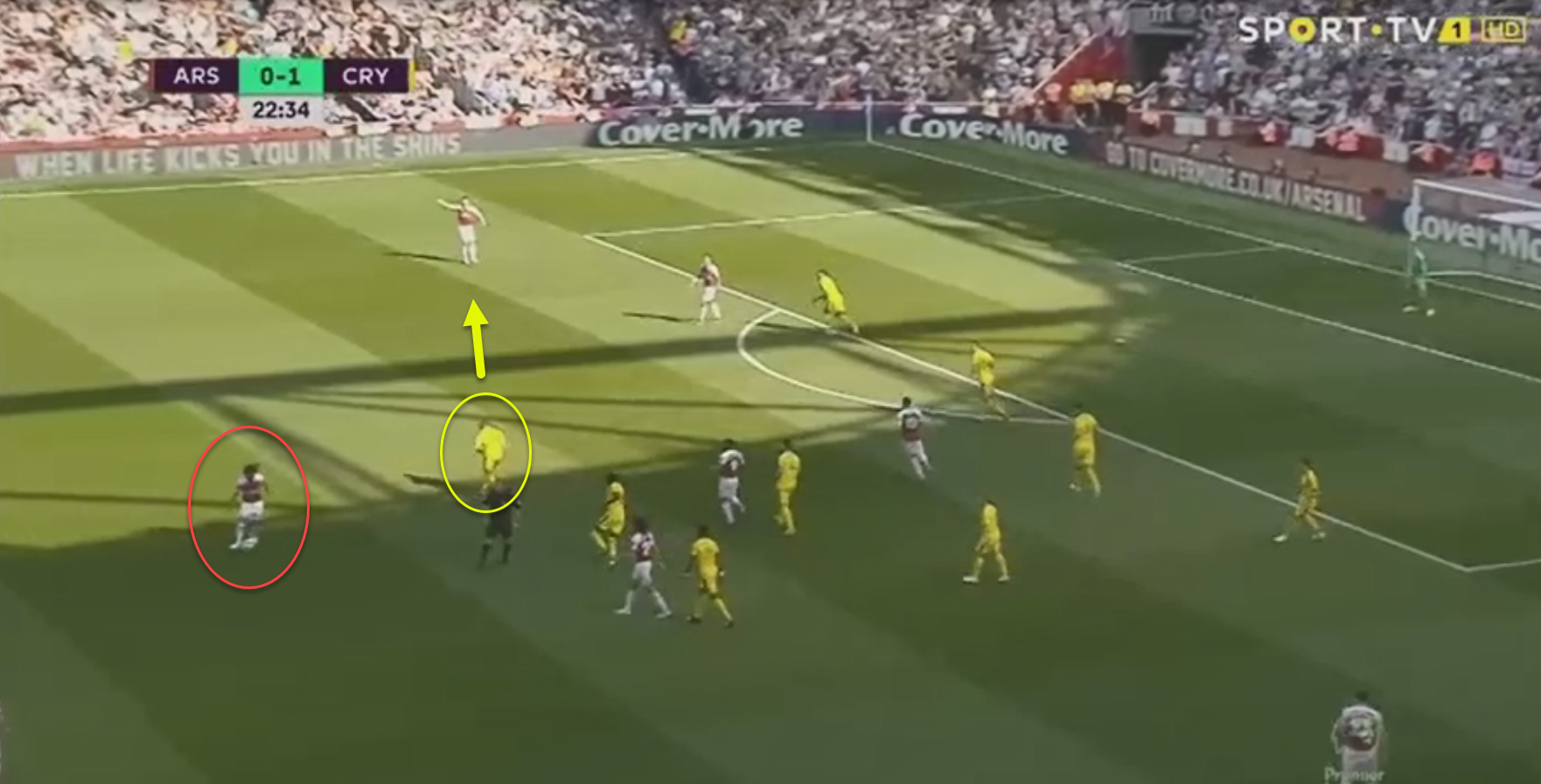 Understandably the Egyptian’s teammates Lacazette and Kolašinac don’t hide their frustration as their body language speaks volumes about what they think of their teammate’s choice of pass. 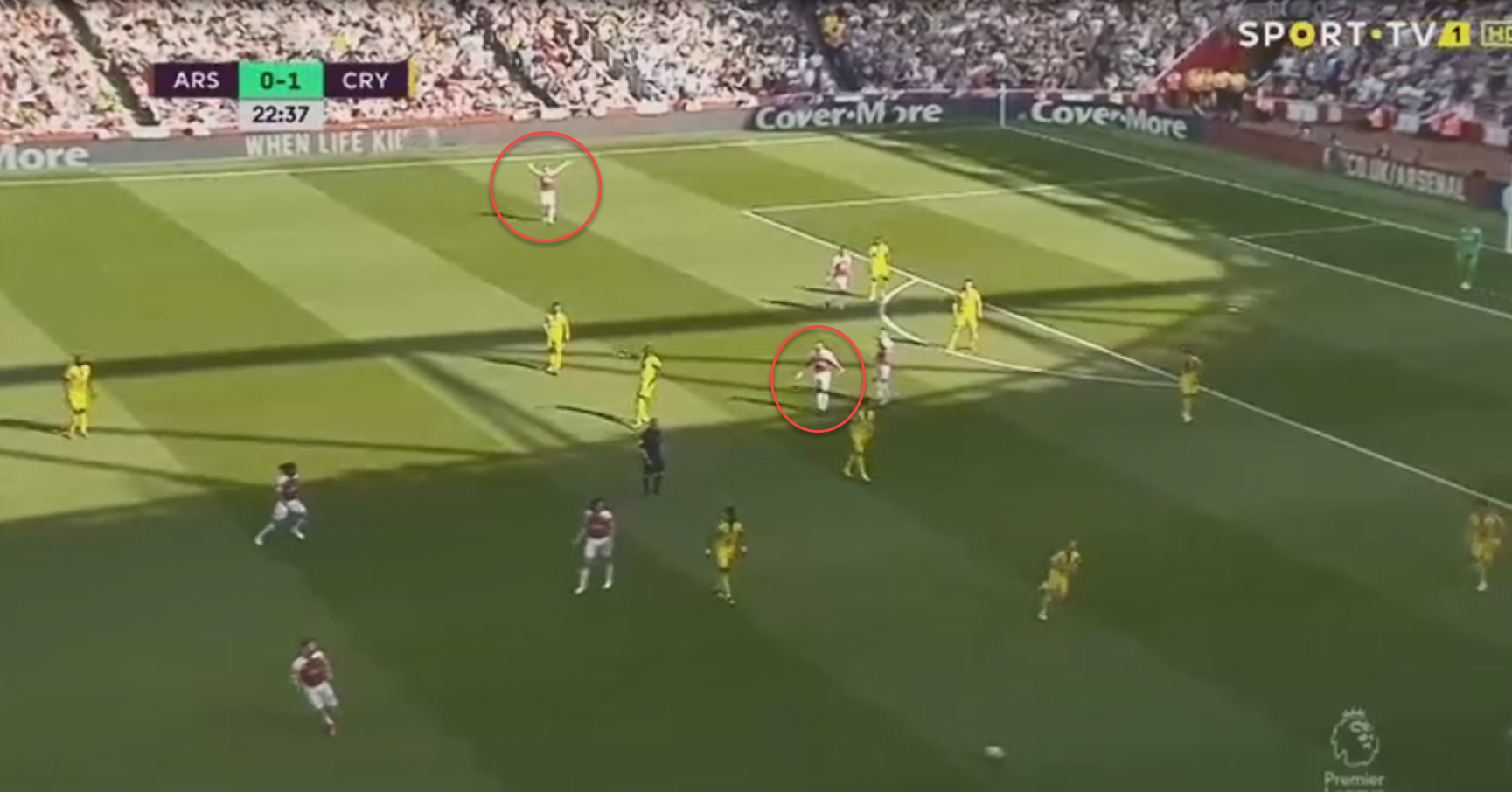 And this wasn’t the only occasion that the Arsenal players showed their frustration at their central midfield pairing’s movement and awareness. In the image below, this time it is Elneny who makes a run upfield, taking his marker Milivojević with him, thus creating space for a teammate to take advantage of. 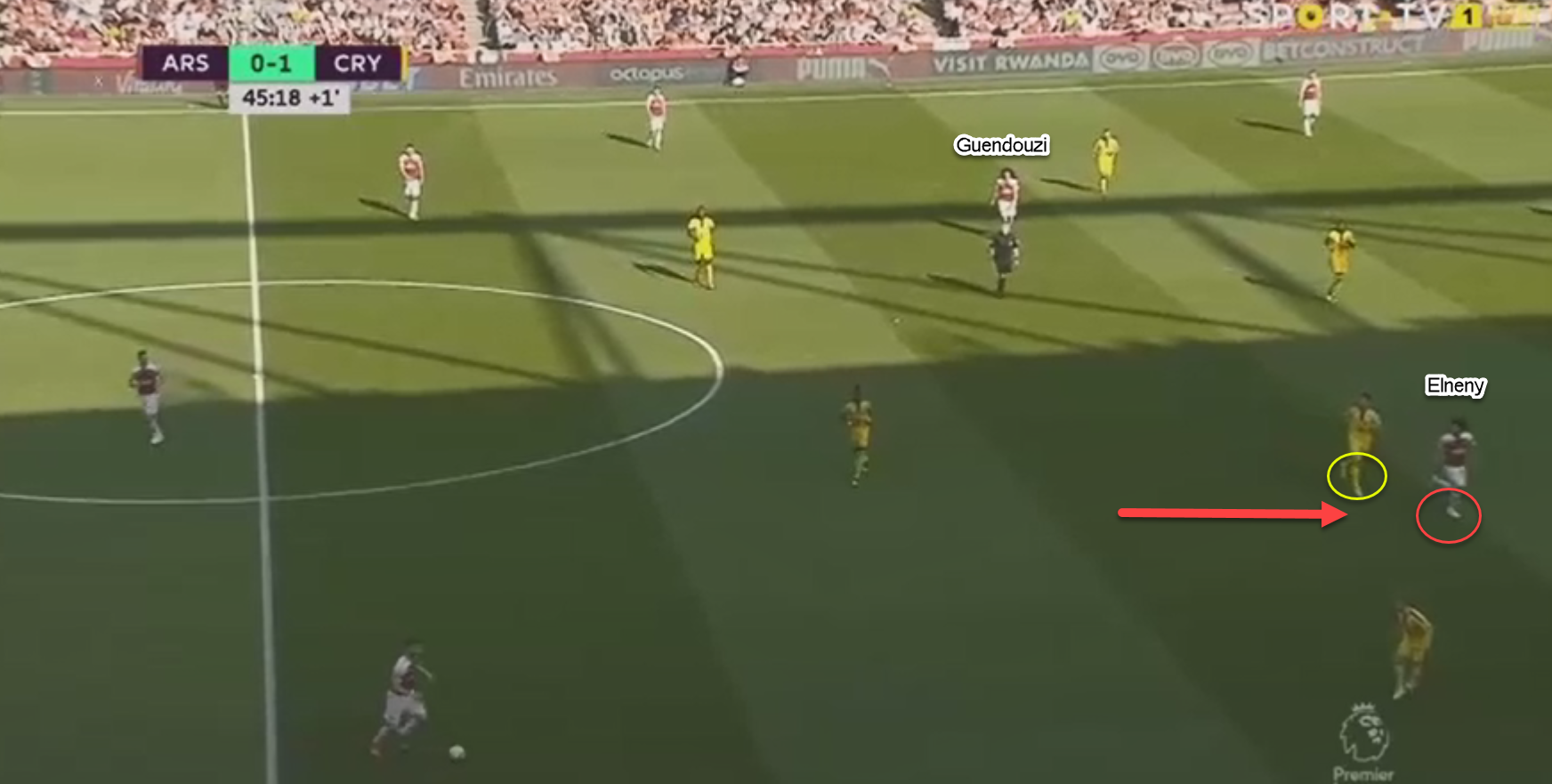 As can be seen in the next image below, this opened up a lot of space, which Guendouzi might have been able to take advantage of by making a quick sprint into that zone. However, it is only when Mustafi explicitly points towards the space that Guendouzi breaks into a light jog in that direction, having been following the move at a walking pace up until that point.

It is important to note here that had Guendouzi made the run, he might not necessarily have been able to receive the ball or have done anything with it, but the run in itself would have helped pull Crystal Palace’s midfielders out of position and help create space for teammates.

Second half: Emery rings the changes

Palace went in ahead at half-time as Christian Benteke’s 17th minute goal meant they could protect their lead by sitting deep and frustrating Arsenal, who managed only one shot on target in the first half.

Unai Emery has garnered a reputation as being a manager who isn’t afraid to change things when the game isn’t going as planned, and this occasion was no different. Alex Iwobi and Ainsley Maitland-Niles came on for Mavropanos and Jenkinson as the Spanish coach switched to a 4-2-3-1 system.

In this set-up, Maitland-Niles played as a right-back whilst Iwobi and Aubameyang took up the wide roles, swapping flanks on several occasions. Mesut Özil mostly looked to create overloads on the flanks by linking up with the full-backs and wide men.

The changes looked to have made an instant impact as Özil and Lacazette combined with some clever movement for the German to equalise. As can be seen in the image below just before the goal, Arsenal could now occupy both Wan-Bissaka and McCarthur by having the full-back and winger attack in tandem down the right-hand side. This meant that Lacazette had more opportunities to pull his marker out of position, as he did here to create the space for Özil to score.

Whatever Emery said at half time seemed to have worked as Arsenal seemed to play with greater fluency and tempo. Elneny and Guendouzi now seemed to be playing with more confidence and it was easier for Arsenal to play the ball out from the back.

In the image below, we see how Elneny slots in between the centre-backs and plays the ball into Benteke’s blind side, which Guendouzi is quick to exploit before turning and playing a pin-point pass to Alex Iwobi on the left wing. This demonstrated that Arsenal were now playing more adventurously, breaking Palace’s lines with vertical passes. 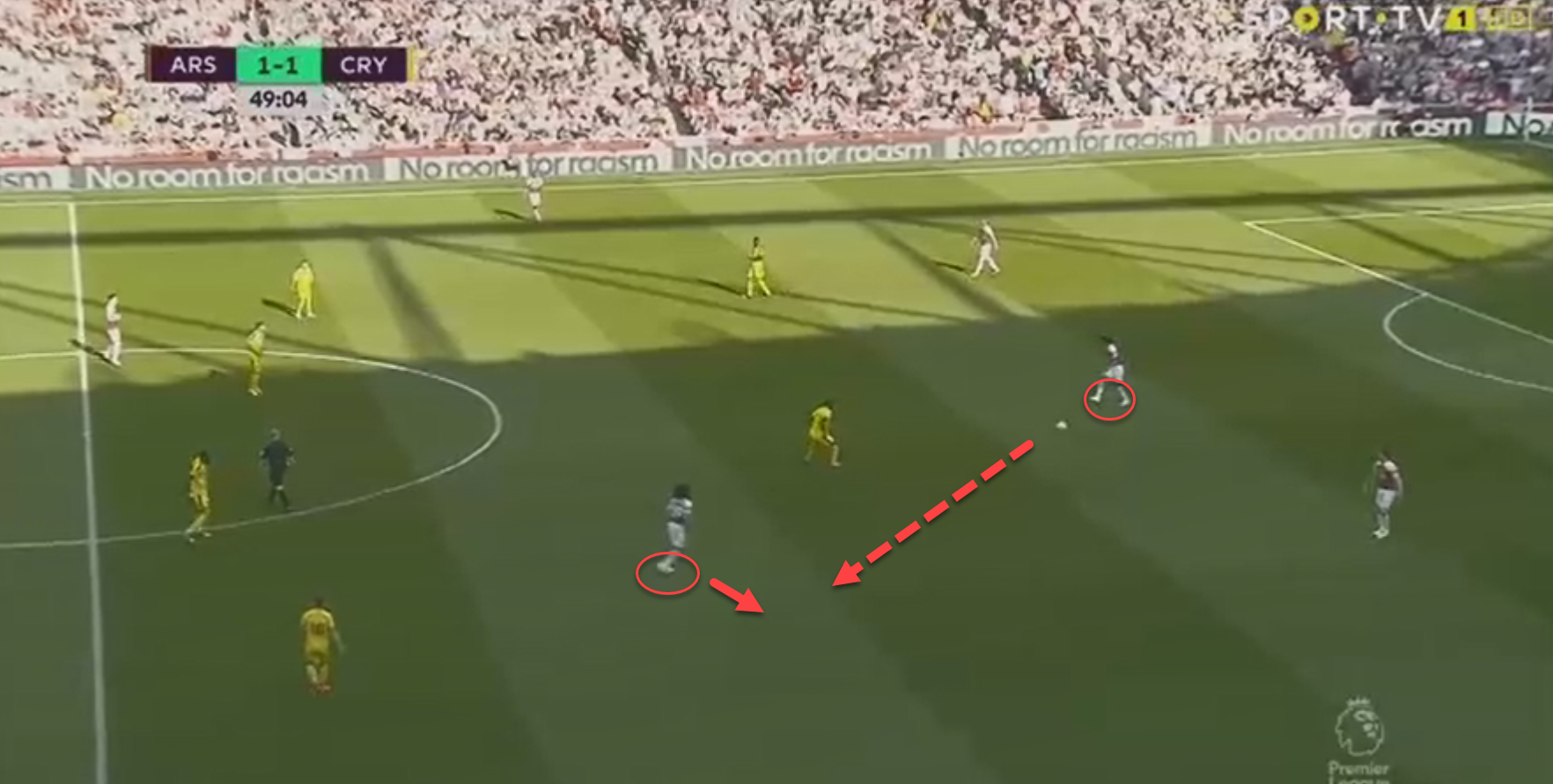 In this period of the game Arsenal looked to be in the ascendancy and seemed the team most likely to get the next goal. It was to be short-lived, however, as Palace capitalised on a Mustafi error to go ahead and then increased their lead all in a space of eight minutes. It was a sucker punch for the home side, who despite having 72% of the possession were unable to break down a Palace side that now had a comfortable lead to protect.

The away side defended competently throughout and young right-back Aaron Wan-Bissaka particularly stood out for his defensive awareness. The youngster was responsible for eight of the 10 interceptions made by Palace over the course of the game and played his part in a solid defensive display.

In the images below we see how a gap opens up between Wan-Bissaka and centre-back Martin Kelly. Sead Kolašinac (circled) looks to exploit that space by making an under-lapping run, which Iwobi spots, playing him in. 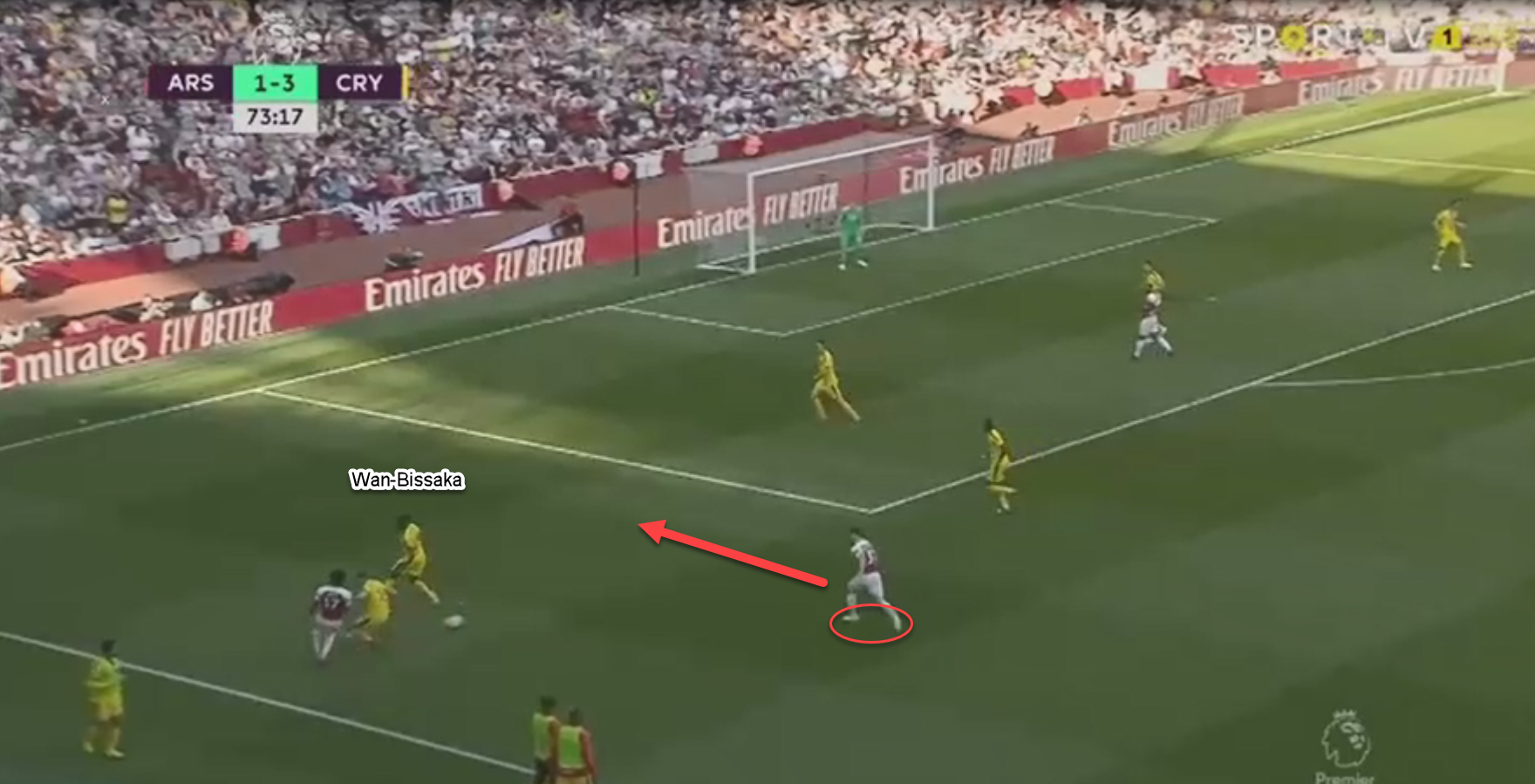 However, no sooner can Kolašinac take a touch than Wan-Bissaka manages to turn 180 degrees, close the gap and dispossess Kolašinac. 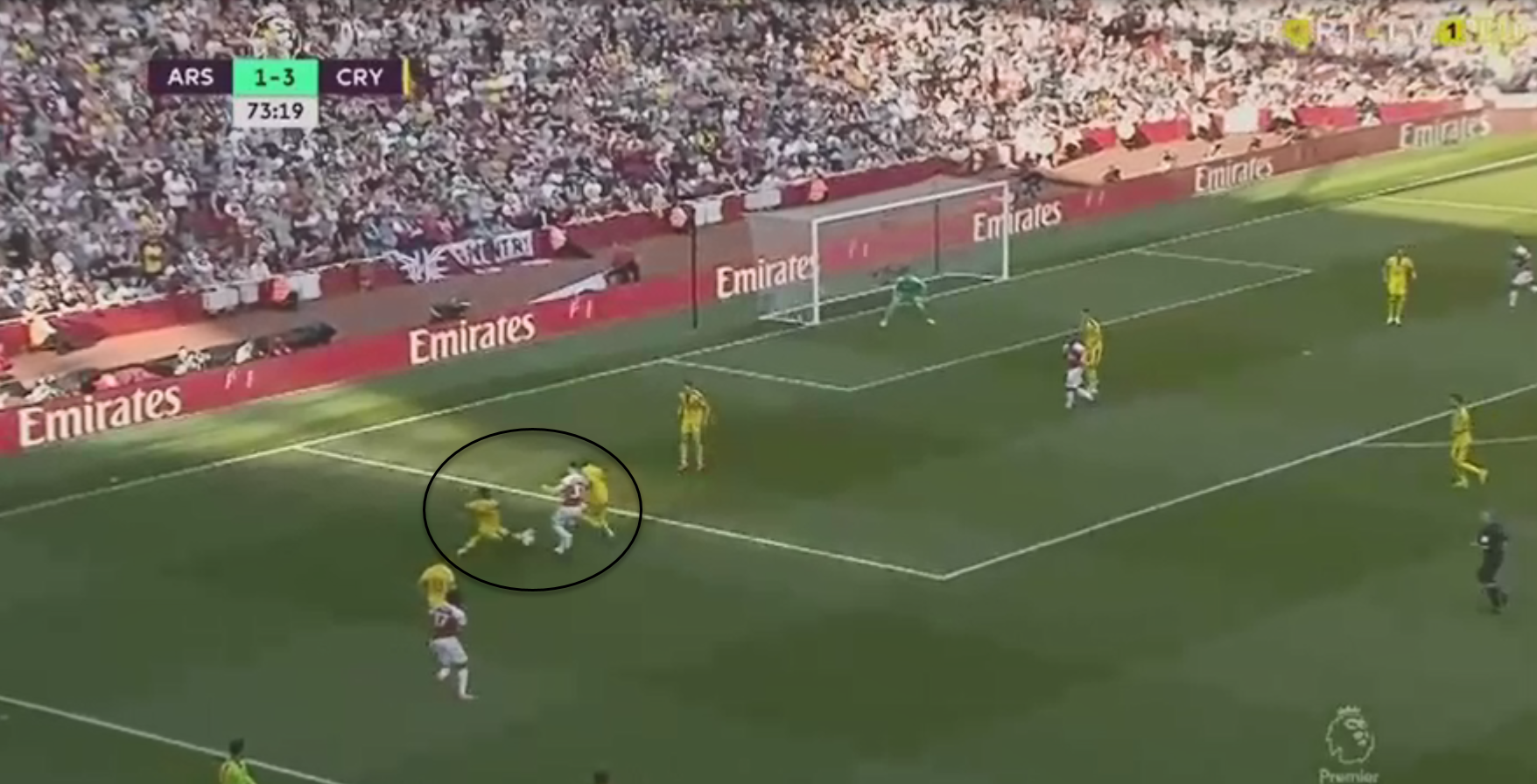 Despite a consolation goal from Aubameyang, Palace were able to maintain their composure and see out the victory with relative ease.

This Crystal Palace side, who are now safe from relegation, put on a thoroughly professional display as they took their chances and defended well through sound organisation and teamwork.

Whilst Unai Emery made radical changes at the break after a poor first half, it turned out to be too little too late as their mistakes at the back cost them. Crystal Palace were leading for most of the game so had no reason to open up and make things easy for the Gunners, who now face a nervous final four games in the race for Champions League football.