How did Arsenal’s efficiency grind out victory over Napoli?

With a 2-0 victory at the Emirates Stadium last week, Arsenal travelled to the Stadio San Paolo for the return leg of their UEFA Europa League quarter-finals with Napoli. The Italians looked at the Europa League as their final challenge of the season. Already eliminated from the Coppa Italia, they are almost assured of second place in the Serie A. They are currently 17 points behind first-place Juventus but seven points ahead of third-place Inter.

Arsenal looked at the Europa League as a way to ensure their place in the UEFA Champions League next season, as they are competing with four teams for two Champions League berths in the Premier League. Keeping the option open to qualify for the Champions League through the Europa League would allow Arsenal more leeway as the domestic season winds down. After the turmoil of the late Wenger era, the chance to lift a European trophy would show the success of Unai Emery’s first season in charge.

This meeting between two of the strongest clubs remaining in the competition was highly anticipated. However, it proved to be a low scoring, cagey affair. Napoli had twice the possession of the English side, but they struggled to break down a well-drilled and aggressive Arsenal defence. The visitors weres able to seal their place in the semi-finals with a 3-0 aggregate victory after an Alexandre Lacazette free-kick against the run of play in the 36th minute. 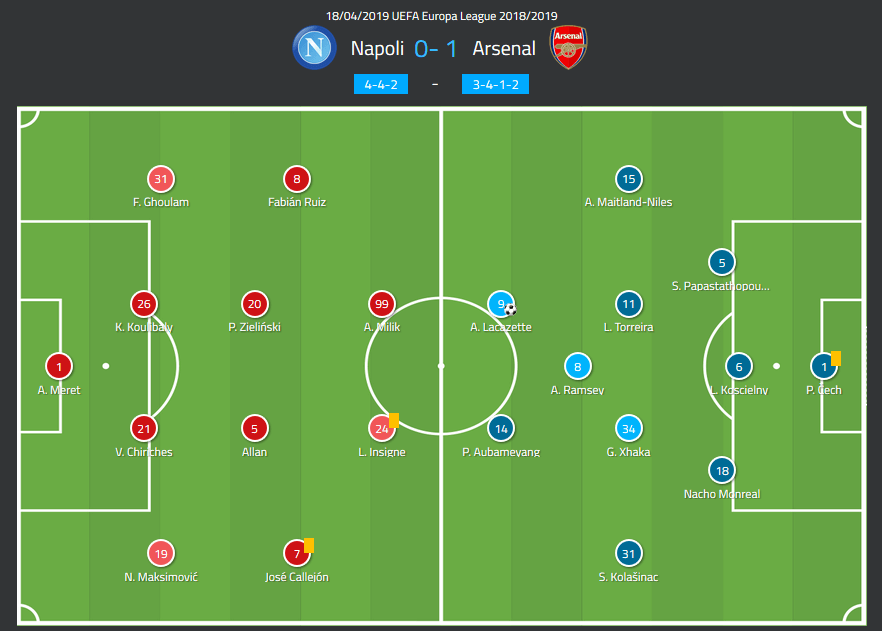 Carlo Ancelotti stuck with the 4-4-2 that he’s had success with throughout the season. David Ospina, Elseid Hysaj and Dries Mertens dropped to the bench from the side that won 3-1 away to Chievo Verona at the weekend. Alex Meret started in goal, as Ospina couldn’t play against his parent club. Allan started in central midfield alongside Piotr Zieliński, and Nikola Maksimović got the start at right-back.

After a 1-0 victory over Watford on Monday, Unai Emery made five changes. He switched to a 3-4-1-2 that he has used successfully in Europe this season. Petr Čech got the start over Bernd Leno, who was dropped to the bench. Joining the German on the bench was Shkodran Mustafi, Alex Iwobi, and Henrikh Mkhitaryan, while Konstantinos Mavropanos was left out of the squad entirely. Getting the start in their place were centre-back Sokratis, wing-backs Ainsley Maitland-Niles and Sead Kolašinac, and striker Alexandre Lacazette.

Several important factors contributed to Arsenal’s victory. We’ll look at the success of Arsenal’s press, and it’s man-orientation. We’ll also look at how Napoli tried to overcome it, and the problems they had.

Arsenal put the squeeze on the Italians

From the beginning of this match, Arsenal looked to press Napoli high up the pitch. With Aaron Ramsey operating in the number 10 role, they had a player who was willing to work hard without the ball and had the tactical awareness to help coordinate Emery’s press.

Arsenal were very man-oriented in their press against Napoli, with the Arsenal players man-marking their opposite counterpart in their area. This wasn’t straight man-marking, as they switched assignments if their target moved too far from their area of responsibility.

During their build-up, Napoli’s right-back Maksimović would stay deep alongside the centre-backs and form a back-three. This meant that Pierre-Emerick Aubameyang would move across to mark the right-back, while Ramsey and Lacazette would mark the centre-backs.

This restricted the ability of Napoli to build their play out of the back, and it was often left to Kalidou Koulibaly to play long passes forward in an attempt to bypass the press. The Senegal international had some success with these passes, often finding Fabian or Milik in the left half-space, but it wasn’t a consistent attacking option.

As we can see from the images above, Arsenal can mark tightly to all of the passing options for Napoli’s back line. Attempting to assist the build-up, Lorenzo Insigne and Fabián Ruiz would drop into deeper positions. These players were marked by Arsenal’s outside centre-backs, and they would step out to follow these players into the midfield, potentially opening gaps that Napoli weren’t able to take advantage of.

Arsenal pressed effectively, but not recklessly. If they didn’t have success with their initial press, they were content to retreat into their shape and defend the space. After Arsenal took a 1-0 lead in the 36th minute, their 3-4-1-2 changed into more of a 5-2-1-2 as they started to defend deeper to restrict the space in behind. Unai Emery was content to allow Napoli to control possession in front of them.

How Napoli tried to break through Arsenal’s defence

Napoli were able to exploit some overloads in wide areas, as a result of Arsenal’s man-orientation. The ability of Napoli to drag the outside centre-backs into wide areas would force them to make a choice whether to let their man go or track him and vacate space.

As we can see in the image below, this is one of the opportunities when Insigne makes a run outside, and Nacho Monreal elects to let him go, allowing an overload on Napoli’s right side. Unfortunately, Napoli didn’t use this often enough.

As the match progressed, Napoli controlled more possession and Arsenal defended deeper. Napoli continued to try and attack through the middle of the pitch. They tried to play inside Arsenal’s defensive shape, but the close man-marking restricted the ability of the attacker to receive the ball with options to turn or play forward passes. As a result, many of these passes ended with a return pass or the receiver having to retreat deeper before they could get their head up.

As we can see in the images below, Allan comes towards the ball and receives the pass, but is immediately pressured by the Lucas Torreira. The pressure prevents him from being able to play the ball forward, and as a result, he plays a simple return pass. The lack of supporting runs, which would allow short passes to onrushing midfielders, meant that Napoli were never able to shift Arsenal’s defence.

With victories home and away to the second best team in Italy, Arsenal seem to be finding excellent form in Europe at just the right time. They continue their fight for a top-four place in the Premier League, but winning the Europa League would appear to be a very real opportunity now. Unai Emery has had considerable success in the competition, and Arsenal are the favourites in their semi-final meeting with Valencia. The first season after Arsène Wenger appears to be on the edge of an exciting conclusion.

Napoli will be disappointed with their performance over the two legs against Arsenal. Finishing second in Serie A will be considered a success, but their struggles in the domestic and European cup competitions will cause concern for Carlo Ancelotti, who is considered a cup manager.