The Derby della Madonnina is always one of the most anticipated matches in Serie A. The 170th league meeting between AC Milan and Inter would have a big impact on who will qualify for the Champions League next season.

Milan came into this match on the rise while Inter have watched the wheels come off over the past few weeks. In the first meeting this season, Inter won the match 1-0 thanks to a 92nd minute goal by club captain Mauro Icardi. Much has been written about Icardi, and a wife called Wanda, so we will refrain from covering it in this tactical analysis. Instead we will just say that much has changed.

During that first match, in the Nerazzuri technical area Luciano Spalletti was being hailed for revitalising the side, while Gennaro Gattuso appeared to be updating his LinkedIn profile on the Milan bench. But since then, they appear to have swapped roles. After the early struggles, Milan entered this game unbeaten in the past 10 league matches while Inter had just crashed out of the UEFA Europa League to Eintracht Frankfurt in disappointing fashion.

This was an extremely entertaining derby match, which isn’t always the case. Inter were able to come back from all their recent turmoil to secure a 3-2 victory, with Spalletti setting his side up well. Inter were able to starve Milan’s lethal new striker of service, causing Gattuso to make changes in the second half to get his side back into the match, but it wasn’t enough to overcome an effective performance by Inter. 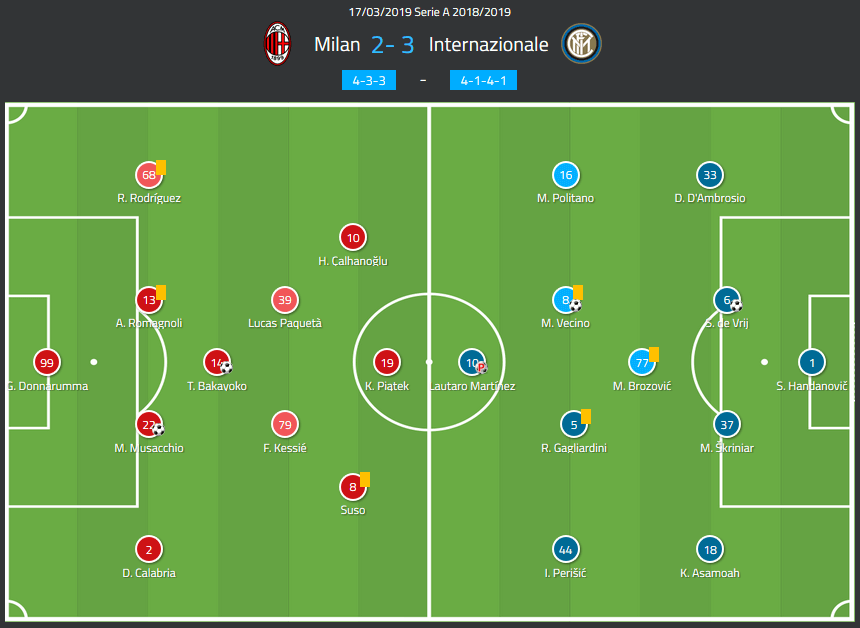 Gattuso made four changes to the side that continued their terrific run of form with a 2-1 victory away to Chievo Verona. Gianluigi Donnarumma continued in goal, with two changes to the defensive line. Ricardo Rodriguez returned from suspension at left-back, while Davide Calabria got the start at right-back.

Spalletti also made four changes to the side that crashed out disappointingly to Eintracht Frankfurt in the round of 16 in the Europa League, and that left their only chance of making the Champions League a top-four finish in the domestic league.

Kwadwo Asamoah got the start at left-back, forcing Cedric Soares to the bench. Roberto Gagliardini and Marcelo Brozovic started in midfield alongside Matias Vecino. In the absence of Mauro Icardi, Lautaro Martinez led the line for Inter against their fiercest rival. Also, in the middle of an injury crisis, Inter started with only seven substitutes on the bench instead of the 12 allowed by Serie A.

We’re going to break down an extremely entertaining Serie A match-up by looking at the success Matias Vecino had against Milan’s midfield, and how Inter built their attacks. We’ll also look at the struggles Milan had getting the ball to their lethal Polish striker. Finally, we’ll examine how Milan changed in the second half to make this a more balanced contest.

Inter came out in a 4-3-3, with a midfield that consisted of Brozovic as the deepest lying midfielder. He helped shield the back four, but his main responsibility lay in helping to progress the ball up the pitch. Working with Brozovic was Roberto Gagliardini, who worked in a box-to-box role.

Without the ball, these two midfielders would drop deeper and form a midfield pair to protect the defence. The third member of the midfield trio was Matias Vecino, who was given a more advanced role in the absence of an injured Radja Nainggolan. He proved to be key what Inter were able to achieve in attack.

Tiemoue Bakayoko played as Milan’s sole holding midfielder, but he struggled in this role alone. He was unsure when to step forward to mark an opponent, and when to stay back and guard the space. This flaw was exploited by Spalletti and Inter through the play of Vecino. He floated in the space behind Bakayoko, and Milan struggled to close him down without opening gaps in their block. He was able to continually move into dangerous goalscoring positions and proved to be Inter’s most dangerous option in attack.

As we can see in the images below, Bakayoko is moving up the pitch to mark one of the other Inter midfielders and has thus left space open behind him for Vecino to move into. Inter are able to play the ball into the Uruguayan midfielder, and he can turn with the ball between the lines to disrupt the Milan defence.

Milan are unable to build through the middle.

In addition to the problems that Milan suffered in defence, they were struggling in the build-up and to create chances with the ball. They frequently try to build up through the middle of the pitch, but Inter’s defence was able to close down these options.

Inter would allow Milan’s back line to take as much time on the ball as they liked, as they obviously felt that the centre-backs were unable to pass through the lines. Instead, they waited for the ball to come into midfield and then immediately pressure the receiver. They appeared to be focused on preventing Milan’s powerful midfielders from receiving the ball on the turn and dribbling towards Inter’s defence.

As Milan struggled in the build-up, the wingers often dropped deeper to assist in the build-up. Suso would frequently stay higher up the pitch, but he has been struggling with his form since December, so he offers little up front.

Gattuso goes on the attack

Inter went into half time in the lead, after scoring their opening goal only three minutes into the match through Vecino. With a deficit to overcome, Milan switched to a 4-4-2. Paqueta was withdrawn, as he was struggling with fitness, to be replaced by Samu Castillejo. He moved up front to work alongside Piatek. Unfortunately for Milan, the situation was made worse when after only five minutes of the second half, Inter took a 2-0 lead from a Stefan de Vrij header.

Even though they gave up a second goal, Milan’s defensive structure was much better in the second half as now Franck Kessie was playing alongside Bakayoko and helped cover for him when he went walkabouts. As we can see in the image below, Vecino is unable to find the space that he was able to operate in during the first half with Kessie and Bakayoko guarding that space.

Even with their defensive structure operating better, Milan were still struggling to create chances. Their attack became more dependent on crosses. In the graphic below, you can see how most of Inter’s attacks came down the right-sided half-space, where Vecino operated, while Milan were mostly reduced to putting in hopeless crosses from wide positions.

In the 57th minute, Bakayoko put in a strong header from a set piece to close the gap to one. Immediately afterwards, Gattuso made another strong change. He took off left-back Ricardo Rodriguez and replaced him with Patrick Cutrone which necessitated shuffling his lineup. Castillejo moved to a more familiar left-wing role, as Çalhanoglu moved centrally to work with Bakayoko and Kessie was shifted back to right-back. This meant Davide Calabria moved over to left-back.

This shift meant that again Milan struggled to deal with Vecino’s movement as Bakayoko was left alone again to cover the space. Inter soon reestablished a two-goal lead when Lautaro Martinez converted the penalty that Politano had earned from a lazy challenge by Castillejo.

With a two-goal lead again, Inter started to defend deeper and invited Milan onto them. In less than four minutes, Mateo Musacchio brought Milan to within one goal again. With Inter defending so deep, it was left to the centre-backs to shine. Milan Skriniar and Stefan de Vrij were impressive, winning the crosses that Milan were made to rely on. 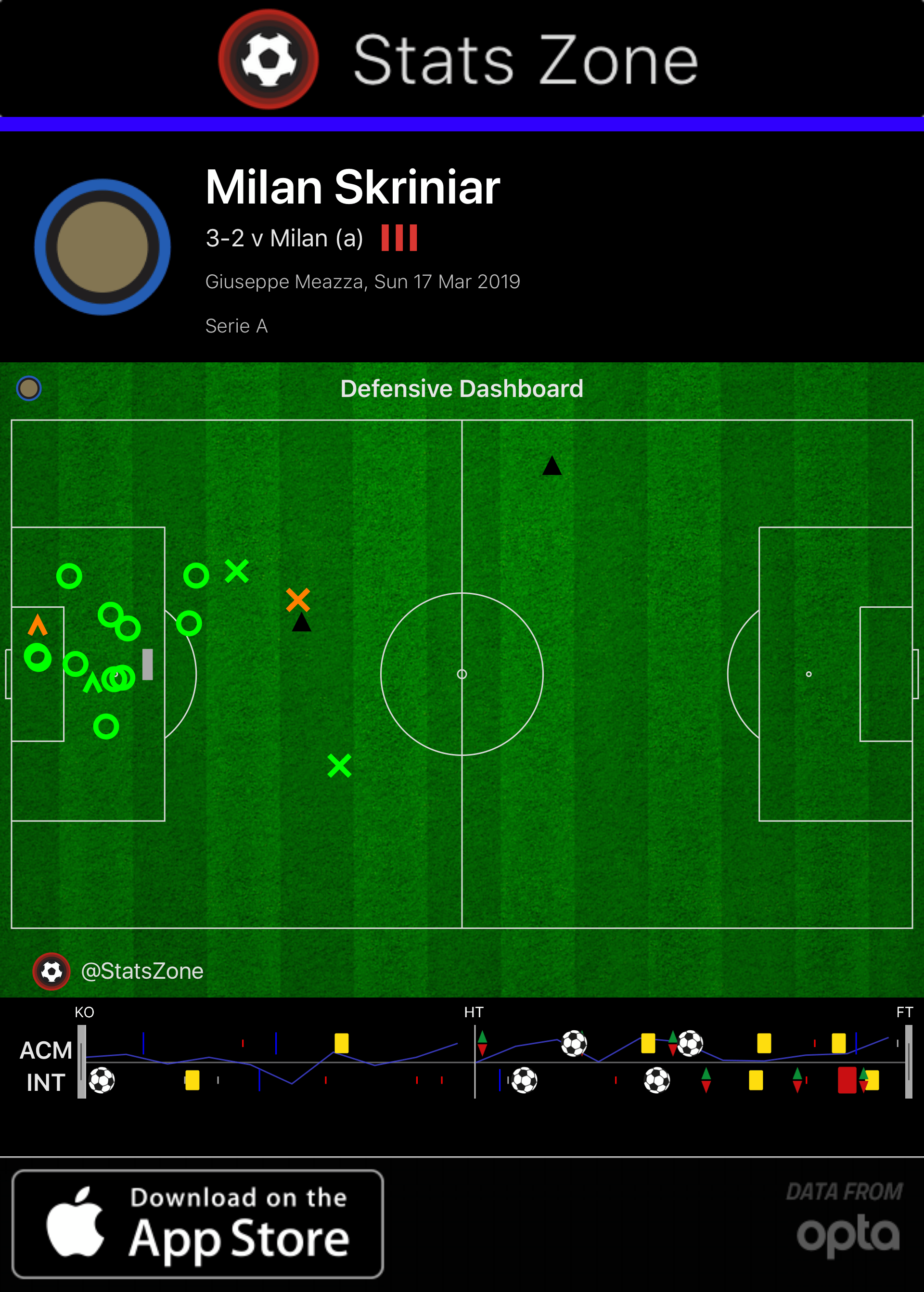 This was a great match to watch and had plenty of tactical intrigue. The first goal was a finely worked team move, with Matias Vecino taking advantage of the space he operated in throughout the first half. After this, four set-piece goals decided the outcome. Gattuso made the changes to get his side back in the game, but the reliance on crosses meant that Krzysztof Piatek was starved of the service he needs to thrive, as he has throughout the season.

This victory doesn’t solve all the problems that Inter have, as they still need to resolve their issue with Icardi, but it leaves them going into the international break in better shape than most expected.