Analysing the numbers behind Europe’s goalkeepers

The goalkeeping position is one that has eluded analysts since the numbers revolution began. While strikers find the most concentration and admiration from analysts, how does one consider the abilities of a goalkeeper in ways that are more accurate than simple clean sheet or save statistics? To build off that, how can a goalkeeper comparison be established in a way that can be communicated effectively?

Breaking down the data into two simple categories, saves per goal and saves per match, is a possible route. With these, not only a goalkeeper’s abilities but also a defence’s abilities can be evaluated.

In this study, 142 goalkeepers were analysed and put into a comparison covering Europe. In total, 8,298 saves and 3,571 goals are looked at. England’s Premier League, Germany’s Bundesliga, Italy’s Serie A, France’s Ligue 1, Spain’s La Liga, and Russia’s Premier League are represented. 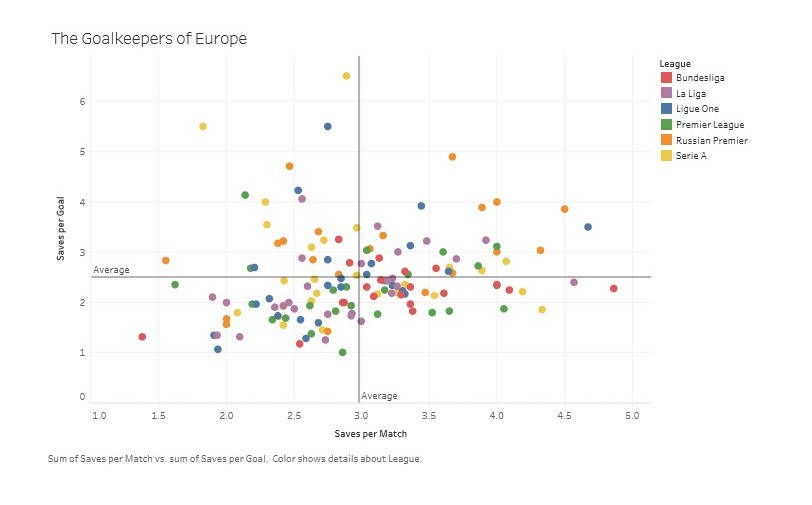 With six leagues’ worth of goalkeepers analysed, a clean average is established. An average defence forces their goalkeeper into roughly three saves per match. An average goalkeeper saves roughly 2.5 shots before conceding.

So how is the data interpreted? In quadrant I (top right), goalkeepers who are forced into more than 3.0 saves per match but also average more than 2.5 saves per goal conceded can be considered above average goalkeepers dealing with mediocre defences.

It is important to consider that goalkeepers are responsible for a reasonable degree of communication guiding the defenders, which is why different goalkeepers representing the same club see a higher degree of saves per match variety than one might expect. Goalkeepers such as David De Gea and Neto feature in this zone.

As for quadrant II (top left), the best of both worlds appear here. This quadrant features goalkeepers making more than 2.5 saves before conceding in front of defences allowing fewer than three saves per match. These goalkeepers have easier days in net, but prove they are worthy of a test and can be depended on. Goalkeepers such as Gianluigi Buffon and Alisson Becker find their place here.

Moving onto quadrant III (bottom left), this is where only worries about goalkeepers appear. Quadrant III can lead to interpretations of a struggling goalkeeper who benefits from an above average back line. This area is most shockingly represented by an icon, Manuel Neuer. It can be speculated that Neuer struggles due to his recent injuries or a loss of confidence, but this is not the article for that. 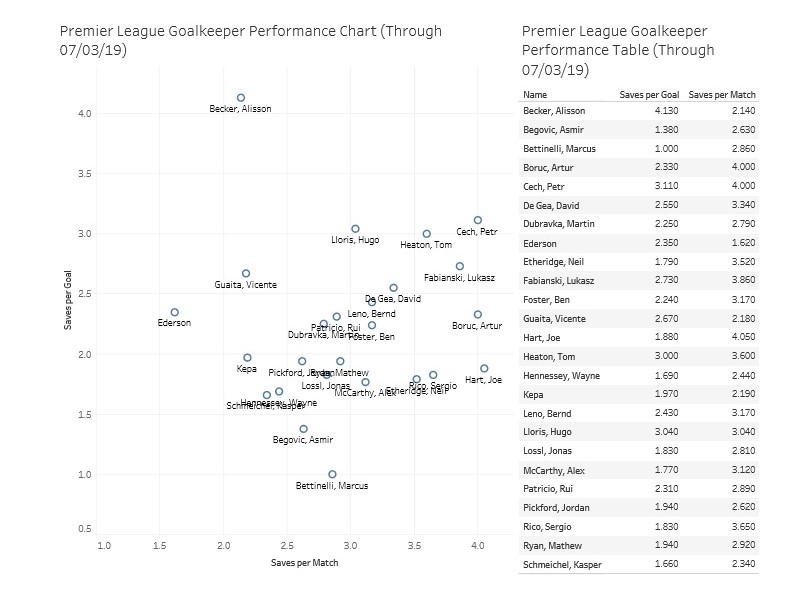 The English Premier League featured a few surprises and a few confirmed assumptions. Recent Three Lions call up Marcus Bettinelli enjoyed success in the Championship during Fulham’s promotion run, but Fulham had the right idea of bringing in Spanish duo Sergio Rico and Fabricio.

Unfortunately, Fabri has appeared just twice this season so he does not feature in this analysis. However, Sergio Rico manages 1.83 saves per goal. This still is not good, but it is technically an improvement on Marcus Bettinelli’s 1.0 saves per goal, which is the lowest of the 142 goalkeepers analyzed in this study.

New arrivals Vicente Guaita (2.67 saves per goal) and record signing Alisson Becker (4.13 saves per goal) have enjoyed incredible starts at their new clubs with the benefit of well-performing defences in front of them, while Joe Hart has failed to recover his falling form and reputation. As a league, the goalkeepers average 2.23 saves per goal, which is slightly below average compared to the Europe-wide standard. 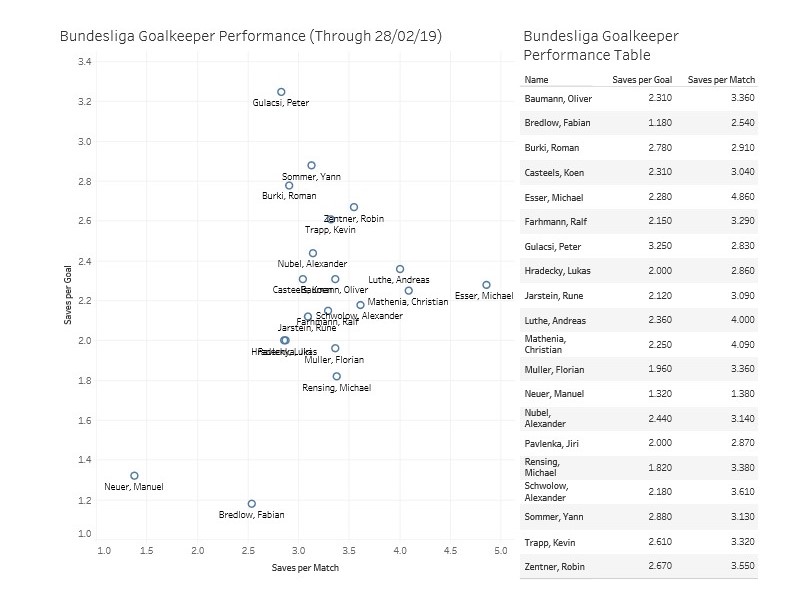 Germany is a nation with a reputation for establishing great goalkeepers. Dating back to Sepp Maier, a lineage that includes Andreas Kopke, Jens Lehmann and Oliver Kahn concludes most recently with Manuel Neuer.

Neuer has been often debated as the best goalkeeper in the world for many seasons now, but it has come crashing down this season. With just 1.32 saves per goal, only Nürnberg’s Fabian Bredlow (1.18) performs worse. However, Neuer does benefit with the best performing defence in the league, as he typically only makes 1.38 saves per match.

Swiss national team duo Yann Sommer and Roman Bürki excel as two of the top three goalkeepers in the league in terms of saves per goal. Sommer enjoys 2.88 saves per goal and Bürki sees out 2.78 saves per goal. Weighing in at number one though is Hungarian journeyman Peter Gulacsi. The RB Leipzig man has blossomed after his struggles in England with a noteworthy 3.25 saves per goal, which rises far above the league average of 2.24 saves per goal conceded. 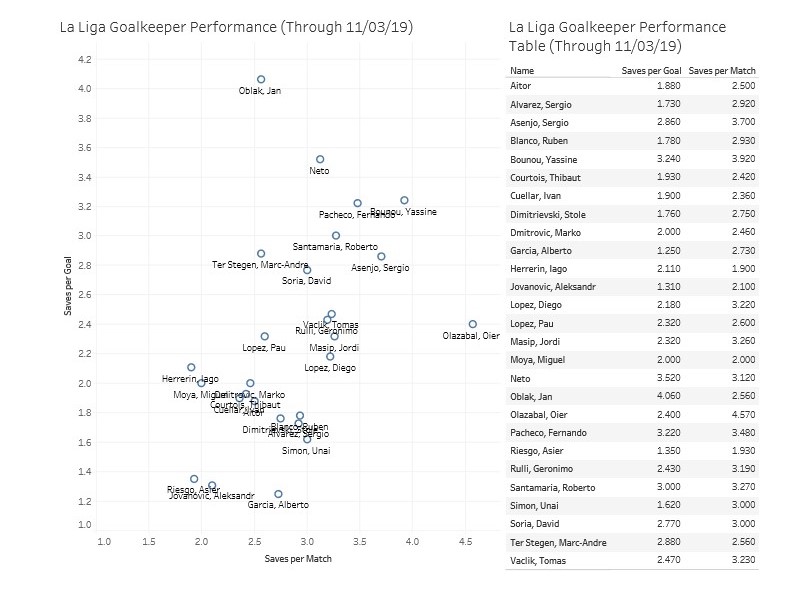 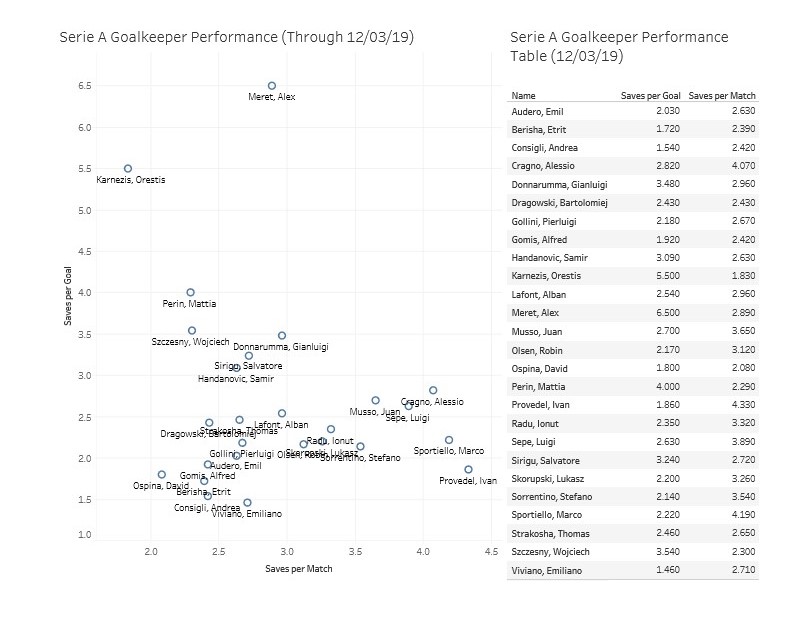 Serie A lost a legend in Gianluigi Buffon, who joined Paris Saint-Germain in the hopes of one final shot at winning a Champions League title. With his departure, Juventus were without their man for the first time since 2001. Up stepped Wojiech Szczesny and Mattia Perin.

Szczesny has seen the majority of action with 20 league appearances at the time of writing, and he has justified the playing time with a noteworthy 3.54 saves per goal. However, backup Mattia Perin has also justified his reported £10.8m move from Genoa. With just seven league appearances, Perin sits at 4.0 saves per goal. The Juventus pair each enjoy a consistent defence in front of them, averaging roughly 2.3 saves per match.

While Juventus continue to be quite dominant in Serie A, two backup goalkeepers stand above all. Napoli youngster Alex Meret looks to be one of the more promising goalkeepers in Europe. With nine league appearances he comes in with a top 6.5 saves per goal.

On the other hand, 33-year-old Greek veteran Orestis Karnezis proves that age is just a number. The fellow Napoli goalkeeper has appeared six times and sees out 5.5 saves per goal while only seeing a league low 1.83 saves per match. Italian football is historically known for disciplined defending, and the goalkeepers have not disappointed this season. 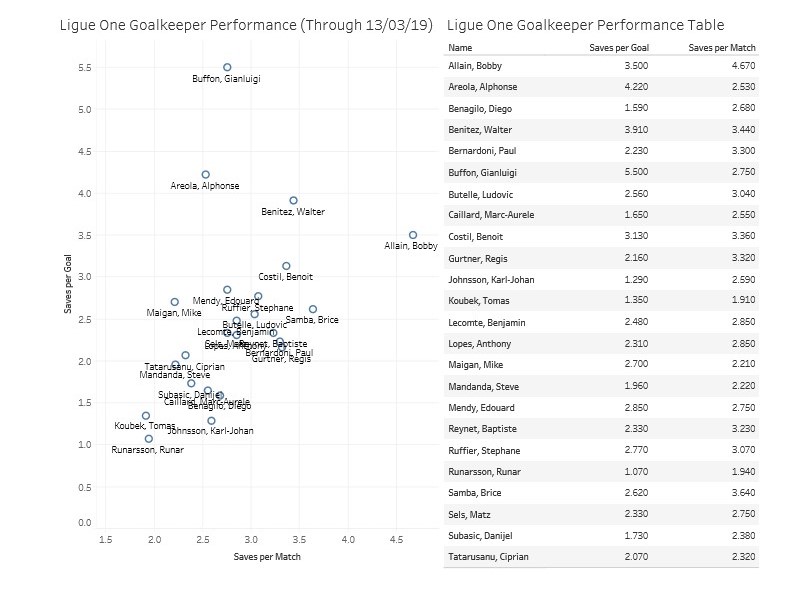 Speaking of Italians, Gianluigi Buffon continues to avoid decline. At 41 years old, by our metrics he remains the best goalkeeper in Europe with more than 10 league appearances at 5.5 saves per goal. Fellow Paris Saint-Germain man Alphonse Areola also sees out an impressive 4.22 saves per goal to get the nod as one of the better goalkeepers in Europe.

Ligue One manages to be one of the better defending leagues in the world, with their goalkeepers only being tasked with an average of 2.84 saves per match. 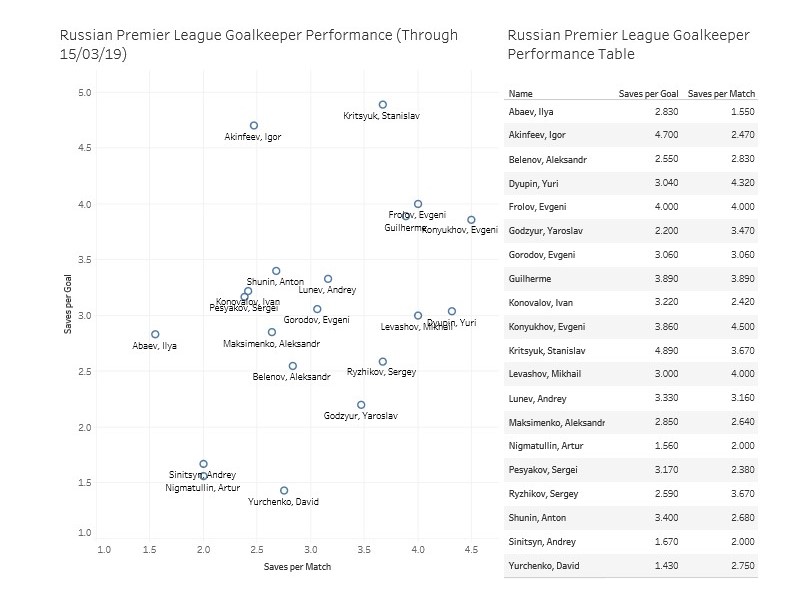 The outcast of this study is the Russian Premier League. Russia has enjoyed many above-average goalkeepers who dream of filling the shoes left by the legendary Ballon d’Or winner Lev Yashin. Another iconic goalkeeper does appear in this data though by the name of Igor Akinfeev. The all-time league clean sheets record holder remains near the top with 4.7 saves per goal while only being asked to make 2.47 saves per match.

Akinfeev is not the only one performing on another level in Russia. Krasnodar man Stanislav Kritsyuk has produced 4.89 saves per goal while facing a higher demand of 3.67 saves per match. As a league, the goalkeepers average 3.06 saves per goal and make 3.04 saves per match, seeing them above Europe’s average in both aspects.

To wrap this all up, some rankings are due. In terms of saves per goal, with a minimum of 10 appearances, five goalkeepers find their way at the top. Paris Saint-Germain’s Gianluigi Buffon (5.5) is first, followed by Russian duo Stanislav Kritsyuk (4.89) and Igor Akinfeev (4.7). The other Paris goalkeeper, Alphonse Areola (4.22), comes in at fourth ahead of the most expensive goalkeeper in the world, Alisson Becker, who rounds off the top five with 4.13 saves per goal.

At the other end of things, which goalkeepers are kept the busiest and bring in the highest amount of saves per match? Hannover 96 goalkeeper Michael Esser (4.86) is asked to do the most, followed by Dijon’s Bobby Allain (4.67). Levante’s Oier Olazabal (4.57) edges into third, ahead of Krylia Sovetov’s Evgeni Konyukhov (4.5) and Empoli’s Ivan Provedel (4.33). 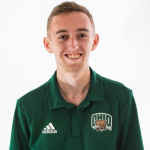