How were Napoli able to exploit Roma’s haphazard disorganisation?

Roma welcomed Napoli to the capital for a high stakes Derby del Sole. Roma are struggling to qualify for the UEFA Champions League next season and fired Eusebio Di Francesco as they hoped to get the bump necessary to secure them a place in Europe’s top club competition. They brought in Claudio Ranieri, who recently lost his job at relegation-bound Fulham, as he looked to recapture the magic of 2009. The Roma-supporting Ranieri was previously in charge of the Giallorossi when they came within one point of winning Serie A, and hoped that he could galvanise the struggling side.

Napoli have taken 12 points out of an available 18 since returning from the winter break and have advanced to the quarter-finals in the UEFA Europa League after overcoming Red Bull Salzburg. While Napoli are 18 points behind Juventus, who seem set to win their eighth straight Serie A title, they have been impressive in their transition from Maurizio Sarri’s 4-3-3 to Carlos Ancelotti’s 4-4-2. Those who backed Napoli using their free betting tips would have been delighted with the outcome.

This game doesn’t bode well for Roma’s chances of catching AC Milan and Inter in the Champions League spots. Giving up a goal to Arkadiusz Milik in the first two minutes meant that Napoli were able to play on the counter-attack against a very poorly organised Roma side.

With Napoli creating chances, Roma scored a penalty against the run of play to go into the break at 1-1. However, Napoli soon put the contest to bed. By making a couple of key tweaks, and with better finishing, they scored three goals in 15 minutes to put the match out of sight. 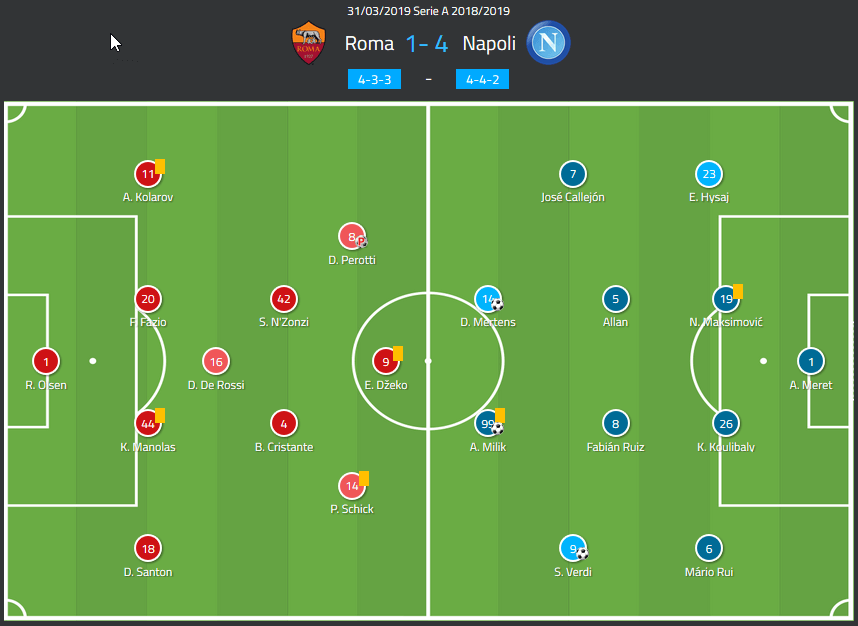 Claudio Ranieri made five changes from the side that fell 2-1 away to SPAL. An embarrassing loss to a team in the relegation zone led Ranieri to also change formation from a 4-4-2 to a 4-3-3. Stephan El Shaarawy missed the match through injury, replaced in the starting lineup by Diego Perotti. Justin Kluivert dropped to the bench, with his spot taken by Daniele De Rossi who started at the base of the midfield three.

The biggest changes came in the back line where three of the starters against SPAL were left on the bench: Juan Jesus, Iván Marciano, and Rick Karsdorp. They were replaced by Davide Santon, former Manchester City player Aleksandar Kolarov and Konstantinos Manolas.

Former Chelsea manager Carlo Ancelotti also made five changes to the side that won easily at home to Udinese 4-2 the week prior. Unlike Roma, most of these changes were forced by injuries or suspensions.

With Lorenzo Insigne still out through injury, Simone Verdi got the start on the left wing instead of Amin Younes, who played against Udinese. Fabián Ruiz also came into the side, in place of the suspended Piotr Zieliński. Mário Rui was preferred to Kévin Malcuit, who dropped to the bench. Finally, Alex Meret got the start in goal in place of Arsenal loanee David Ospina, who collapsed during the match against Udinese after suffering a head injury.

In this tactical analysis, we will be looking at several of the key aspects in Napoli’s easy 4-1 demolition of Roma. We will look to see how Simone Verdi and Napoli’s attack utilised space to pick apart a disorganised Roman defence. We will also check some of the changes Napoli made in the second half that allowed them to get three goals in 25 minutes to put Roma away.

The visitors from Naples came to the capital looking to add to the Romans’ misery. With Insigne missing from injury, Simone Verdi got the start on the left side. Simone Verdi has started slowly at Napoli after his £22.5m  move from Bologna in the summer of 2018. In 2017/18 at Bologna, he contributed 10 goals and 10 assists, but so far at Napoli he’s only been responsible for three goals and three assists.

Verdi played a key role in this match, helping Napoli take the lead after only two minutes. He spent very little time on the left flank, as he positioned himself in the left half-space throughout the match. In the image below, we can see that he receives the ball between the lines as Milik makes the run between the two Roma centre-backs. Verdi is able to chip the ball over the Roma defence, allowing Milik to bring the ball down and fire a shot into the net past Robin Olsen.

After the initial goal, both sides settled into a pattern of play in which they both appeared more comfortable without the ball. With Verdi operating in the left half-space, it was left to Mário Rui to provide the width down the left side.

He took up a very aggressive position, positioned high up the pitch on the left while Verdi was located inside. With Rui taking up such an advanced position, Elseid Hysaj at right-back was much more cautious. Though the first 20 minutes, he stayed much deeper to prevent Roma from getting forward on the counter.

As the first half wore on, Napoli eventually started to control possession. With more possession, the wingers in Roma’s 4-3-3 were pushed back by the Napoli full-backs, as both Rui and Hysaj got forward more with prolonged possession. This transformed Roma’s 4-3-3 into more of a 4-5-1.

Roma struggled to progress the ball up the pitch as they had very few connections between their midfield and their attack. Džeko was isolated throughout most of the match, with most of his touches coming near the centre of the pitch as Roma played the ball forward to him. Unfortunately for the home side, he didn’t have the support to retain possession and allow Roma to advance.

Roma were able to equalise just before the half-time break, against the run of play. Most of Roma’s attacks came down their right side, as they tried to exploit the space behind the advanced Mário Rui. Unfortunately for Roma, their main outlet for this attack was the struggling Patrik Schick, who the Roma fans have turned against due to his lack of production.

How Napoli turned it on in the second half

After controlling the first half, Napoli had to be disappointed to go in at half-time with a 1-1 scoreline. During the break, Ancelotti made a couple of adjustments to make his side a threat. In the first half, as a result of the possession, Napoli’s centre-backs were playing near the halfway line with the ball. This allowed Roma’s defence to stay more compact and still access the centre-backs to press.

In the second half, we saw Napoli’s centre-backs stay 10 yards deeper. This meant that Roma’s defensive block needed to lose some of its vertical compactness to still access Napoli’s backline.

The result of this was evident in the 48th minute when Napoli were able to get forward quickly through Roma’s defensive block. José Callejón was able to put a ball across the six-yard box for Dries Mertens to tap in. This restored Napoli’s lead, and after this the ending was never in doubt.

As Napoli became more dangerous on the counter-attack, the additional space allowed their centre-backs to continually play dangerous line-breaking passes. As we can see in the image below, Nikola Maksimović is able to split the Roma attacking and midfield lines to play the ball into Mertens.

Another key part of Napoli’s attack was the midfield contributions of Fabián Ruiz and Allan. They played very deep in midfield, and this caused issues for Roma throughout the match. Rather than step out to pressure the Napoli midfield, they preferred to stay in their shape and occupy space.

A continual problem throughout the match was the inability of Roma’s defence to hold its line. They were repeatedly guilty of playing Napoli players onside. As we can see in the image below, the backline is uneven and allows Mertens to stay onside before Callejón lays a ball forward for him. This basic type of organisational issue was seen three times in the first half alone.

Ancelotti and Napoli were able to control this control this match for 90 minutes, with Roma appearing vulnerable and disorganised without the ball. The defence was uncoordinated and shambolic in its ability to hold a line, while the midfield was passive and unable to close down a Napoli midfield even though it had a numerical advantage. If Ranieri’s appointment was meant to turn the season around and offer Roma a chance of Champions League football next season, he has a lot of work to do.