How was Simeone forced to deviate from rigid defensive mindset to beat lowly Girona?

Following their exit from the Champions League at the hands of Juventus, Atlético Madrid‘s focus now turns towards finishing as high as possible in the La Liga table. A title triumph remains unlikely with Barcelona eight points ahead. However, Diego Simeone’s side still have an excellent chance of completing the campaign as runners up.

Girona, the visitors to the Wanda Metropolitana on Tuesday, continue their fight to secure their place in the top flight ahead of next season. Currently 14th, they lie six points above the drop zone. However, with 18th-placed Celta Vigo buoyed by the return of talismanic striker Iago Aspas, Eusebio Sacristán’s side are far from safe.

Despite enjoying more possession than their hosts, Girona were ultimately beaten by two goals to nil. This analysis will attempt to discover the reasons behind Atlético’s win.

Diego Simeone went with his preferred system of 4-4-2 from the start, pairing Chelsea loanee Álvaro Morata with Antoine Griezmann up front. Saúl and Thomas Partey occupied wide roles, with Koke and Rodri in the centre.

Despite the lineups below suggesting otherwise, Atlético began the game with Santiago Arias on the right of a back four, while Filipe Luís occupied the left-back berth. However, Simeone changed their in-possession shape to 3-5-2 for the latter portion of the game, with Saúl at left wing-back and Arias on the right. 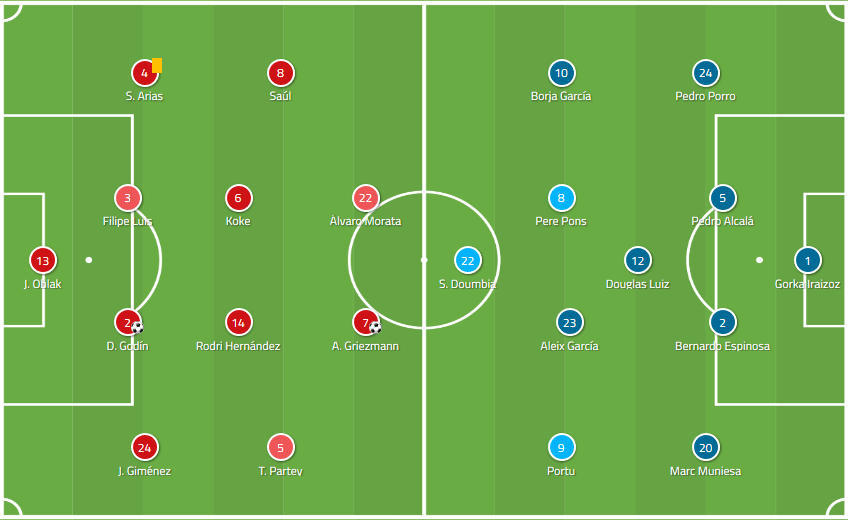 Girona lined-up in a 4-1-4-1 shape, with Ivorian striker Seydou Doumbia leading the attack in the absence of top scorer Cristhian Stuani. Aleix García and Douglas Luiz, both on loan from Manchester City, were joined by Pere Pons in midfield.

Despite being the away side, as well as ranking 12 positions below their hosts in the league table, it was often Girona who took on the role of protagonist in this fixture.

Ever conscious of retaining defensive solidity, Simeone once again deployed a cautious game-plan for much of this encounter. While Girona were regularly faced with different forms of positional pressing during their goal kicks, they managed to bypass the pressure on numerous occasions.

In these moments, Atlético were generally consistent in retreating into a compact low-block. With the centre usually closed off, Girona looked to progress down the sides before delivering a cross to the box. Atlético were normally well prepared to deal with crosses, but there were a few instances where the away side succeeded in finding a forward in the crowded penalty area.

Instead of positioning themselves immediately ahead of the defensive three, the midfield line began exactly where the defensive line ended, offering more support to the wing and preventing cut-backs to late-arriving opponents.

On this occasion, Borja García’s pin-point accurate cross finds Doumbia for a powerful header on goal. As is so often the case, Oblak managed to parry the effort away from danger. 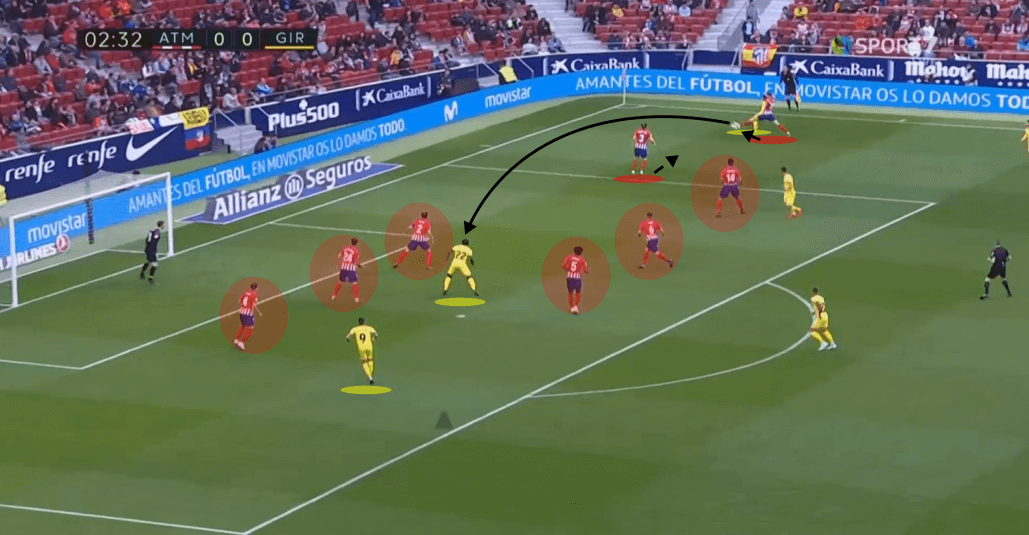 Progression through the centre proved difficult for Girona, with Atlético maintaining good horizontal compaction to close off any passing lanes into the space between the lines. Another way in which the visitors attempted to score involved simply shooting from range.

Given how far out most of the efforts were, as well as the quality of Oblak between the sticks, this tactic ultimately didn’t provide Girona with any real success. The image below shows Atleti set up in two banks of four, preventing passes into the forwards. Borja García receives possession in the right half-space before striking through the crowd, with the shot requiring a straightforward save from Oblak. 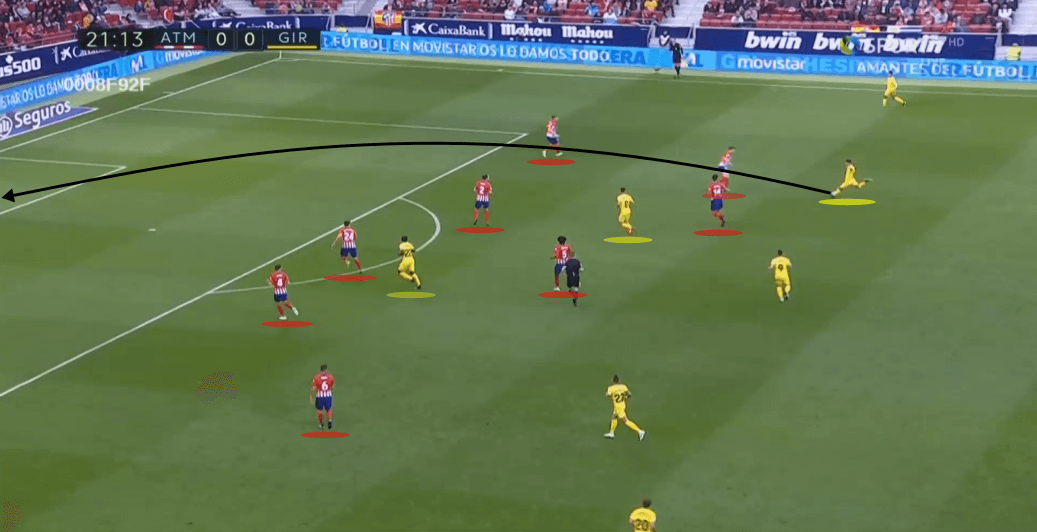 One other way that Girona tried to break Atlético’s compact block involved the use of link passes. As mentioned previously, the home team were able to retain narrow spacing between the players on both the defensive and midfield line. In light of this, Girona rarely found a way to progress directly through the centre.

Instead, they looked to use the wide men on both sides as a link to the 10 space. The image below illustrates this, with Pedro Alcalá playing a link pass via Pedro Porro into Borja García in the space between Atlético’s defensive lines.

This was a tactic they used regularly to exploit the fact that their rivals didn’t play with a defensive holding player between the lines. 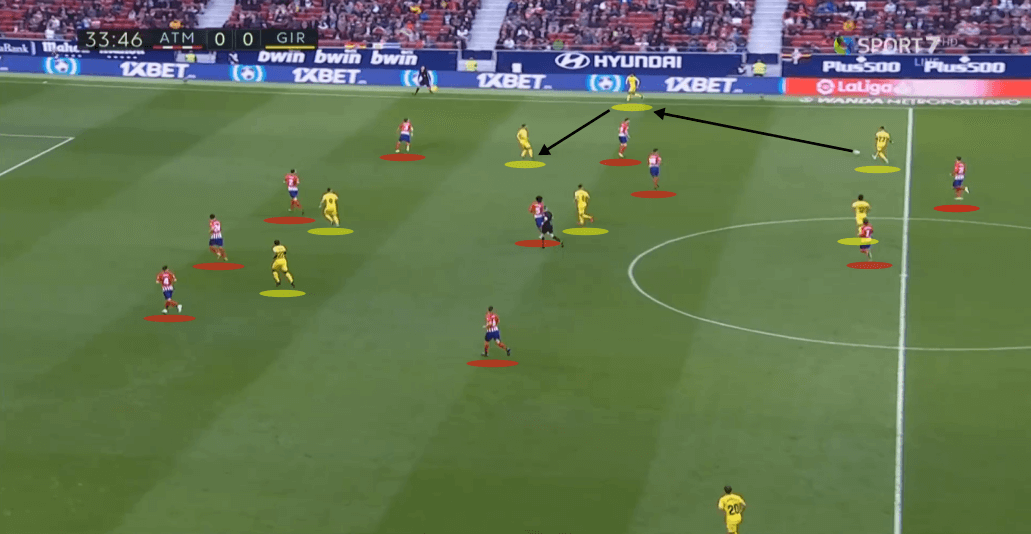 During their build-up phase, Girona often used wall passes off attackers who had dropped off the front as a way of finding players behind Atlético’s cover shadows. They also occasionally went in search of second balls on the other side of midfield, with varied success.

Again with knowledge of their opponent’s high level of organisation, Girona frequently showed a clear intent to exploit any moments of slight disjointedness. During their transitions from defence to attack, they identified the open spaces quickly and played direct passes forward. Their hopes of catching Atlético out on the break were often dashed by tactical fouling, however.

The following image shows one such occasion. Girona look to break quickly following a turnover deep in their own half. Having played direct towards Doumbia, the striker retains possession before looking up in search of runs beyond him.

As highlighted below, three teammates make positive movements in an attempt to exploit the open space. Recognising the threat that exists, Godín accepts that a tactical foul perhaps represents the best solution. 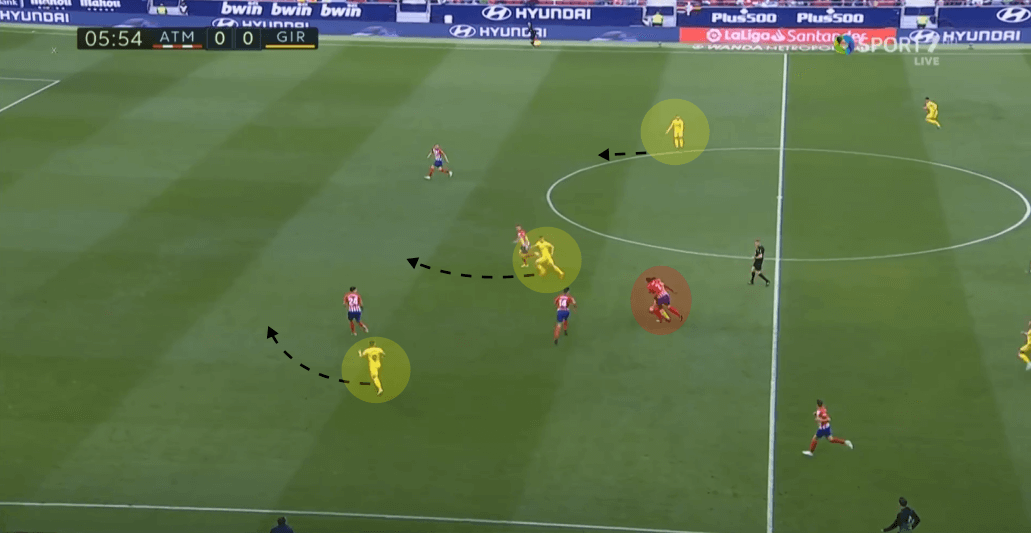 In other scenarios similar to the one shown above, Atlético’s defenders would look to delay their opponents, giving teammates a chance to get back and restore an organised unit. Generally speaking, they were able to manage these moments well.

Overall, Girona were impressive in how they looked to build the play from deep, as well as in their efforts to break down Atlético’s deep defensive structures. Despite these attempts, however, they failed to find the back of the net having registered nine shots on goal, five of which were on target.

Girona often created difficult conditions for Atlético from goal kicks by using a high pressing/marking scheme. However, there were also many occasions when the home side were given the opportunity to build, but still chose to play long in search of the second ball.

Without any prior knowledge, you’d be forgiven for thinking Atlético were the ones languishing in the lower half of the table, given their lack of bravery in the first phase of possession. Their direct approach didn’t, however, come without some purpose and structure.

Throughout the game, we saw Oblak aim his goal kicks for Saúl on the left wing. Additionally, there was always strong presence surrounding the Spaniard in preparation for the knock-downs.

As shown by the image below, Saúl’s header is supported by Luís, Rodri, Koke, and Partey, while Morata is ready to receive the flick on. Their success through these methods varied and quite often, Morata’s loose touch lead to a cheap loss of possession. 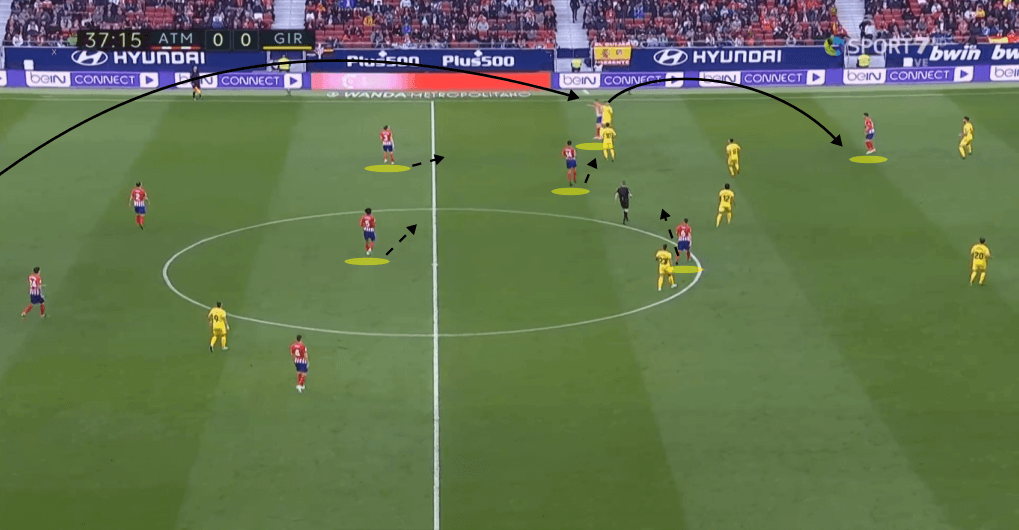 Also a prevalent feature of their performance, especially in the first half, Atlético frequently looked for the runs of Morata and Griezmann in behind Girona’s defence with long passes over the top.

The image shown below provides an example of this. With little room to progress through the midfield, José Giménez bypasses Girona’s defensive lines with a lofted pass in behind. Morata times his run well to receive in the box. However, his first-time finish lands on the roof of the net. 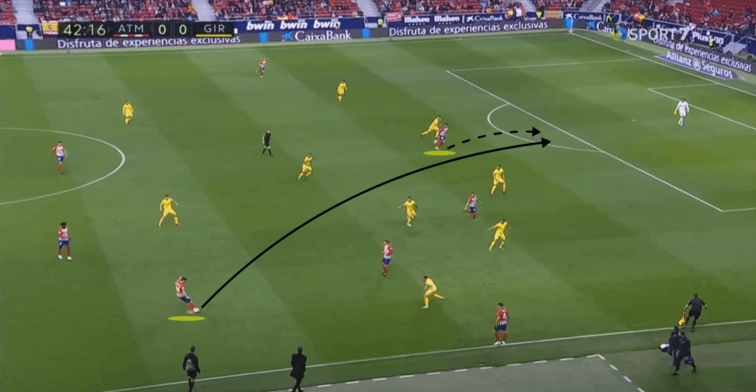 Playing at home against a lower placed side wasn’t enough to deter Simeone from his tried and trusted methods. Long passes were a central part of their display, while defensive solidity was prioritised over expansive football.

As we will discover in the next section, however, the Argentine was forced into taking more risks during the second half.

With the clock ticking, Atlético gradually began to take more risks, adjusting their shape on numerous occasions. The first alteration involved moving into a 3-5-2 in possession. They did, however, maintain their defensive shape of 4-4-2.

Saúl became a left wing-back, with Arias playing on the opposite side. Koke, Rodri and Partey formed a midfield trio, with Griezmann and Morata up front. Within this shape, Griezmann and Koke had license to roam between the lines.

Focusing on horizontal play during this period of the game, they searched for the wing-backs at every opportunity, often having built the play on the other flank. Overall, the system change didn’t lead to any significant improvement, and it took two brave substitutions to really make a difference.

The first to make way was Thomas Partey, with Ángel Correa taking his place. Shortly afterwards, Felipe Luís was withdrawn for Vitolo. These changes eventually allowed them to line up in an attacking shape of 2-4-2-2. The two centre-backs formed a protective block with a double pivot of Koke and Rodri. The attacking block was made up of Vitolo, Correa, Morata, and Griezmann. Finally, Saúl and Arias were tasked with arriving onto the play out-wide.

Their approach to pressing also changed with more attackers committed high up the pitch. The image below illustrates this, with Girona forced into a misplaced pass given the lack of quality options available to the man in possession. 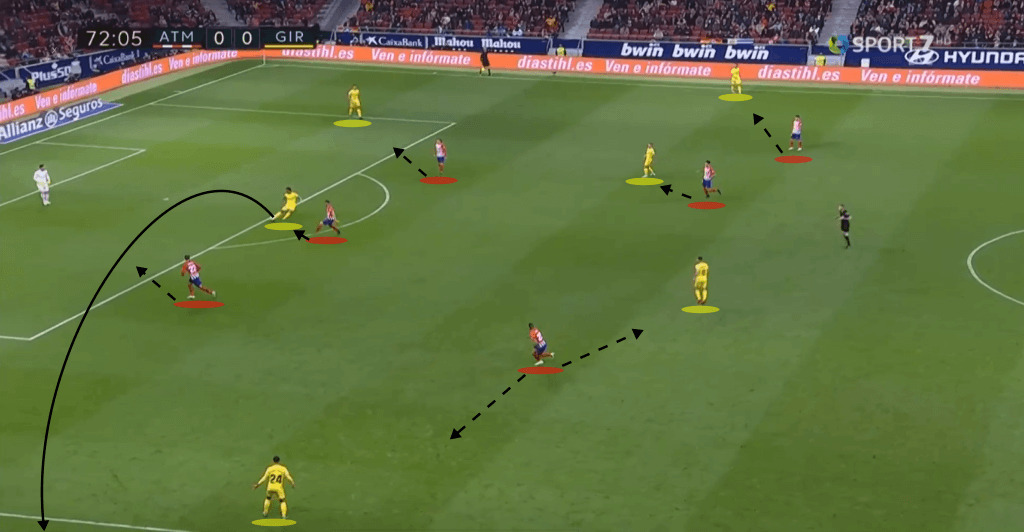 During their possession phases the attacking block was fluid, taking up positions between the lines, as well as ensuring Girona’s last line was occupied. Such a high level of central occupation forced the away team into a narrow defensive unit, leaving vast amounts of space out wide for Saúl and Arias to exploit.

The image below illustrates this. Vitolo carries the ball into the final third, before feeding the arriving Saúl. The 24-year-old’s cross is dealt with well on this occasion. 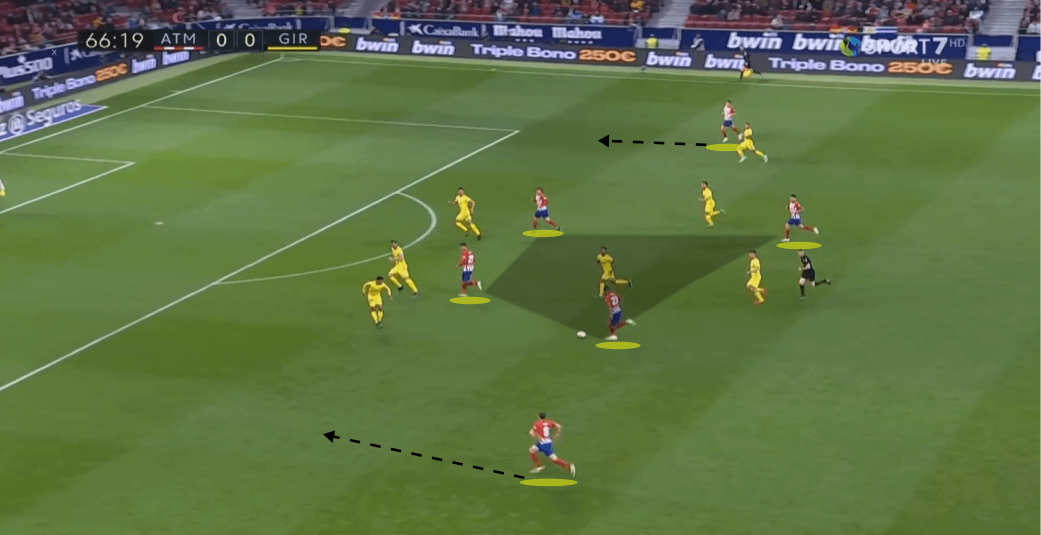 The increased attacking presence also allowed Atleti to find attackers between the lines, before they could eventually supply the wide players in advanced areas, or combine centrally to penetrate the Girona backline.

In the image below, Arias’ positioning on the touchline forces his opposing left-back to retain access. In doing so, he leaves extra room for Correa to receive in the right half-space. The Argentinian forward turns in possession, before playing a pass in behind towards Arias. 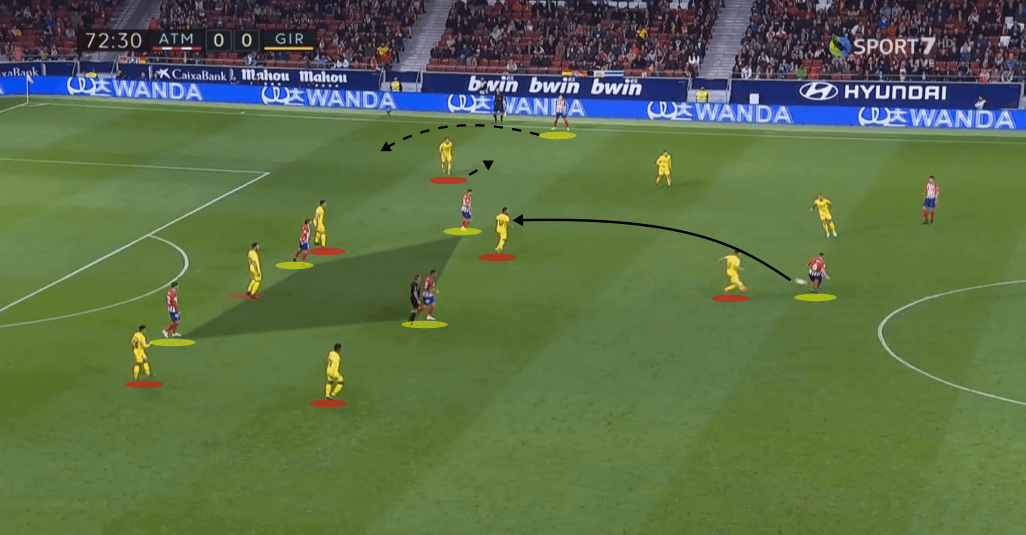 An attacking move similar to the one above also ultimately lead to the breakthrough. Vitolo managed to penatrate centrally, eventually forcing a corner. Atleti took the set-piece short, before a deflected Vitolo shot found it’s way to Godín, who headed home from close range.

Following their first goal, Atleti quickly reverted to a low block with two banks of four. With Girona committing extra men forward, the home side were able to clinch the victory thanks to a counter-attacking move which culminated in a delicate chip over the keeper from Griezmann.

Overall, Girona were often the team to show more purpose and positivity in possession. However, Atlético’s adjustments in the second half proved decisive.

The win leaves Los Rojiblancos in second position, with their place in next season’s Champions League all but sealed for yet another year. Girona, meanwhile, lie six points above the relegation zone, but few would bet on them dropping out of the division.