Unbeaten in the previous 18 home matches, Napoli welcomed Juventus to the Stadio Sao Paolo. With Napoli’s streak extending back to March 2018, they were hoping that they could tighten the race at the top of the table to 10 points, but they came into this match having won only one of their last six Serie A matches against Juventus.

At half-time, it looked like Juventus would secure an easy victory even though Napoli controlled the ball. A red card for Napoli’s goalkeeper in the 25th minute, followed by two set-piece goals for the Bianconeri made it look easy at the half-time break.

The second half changed within 90 seconds after a second yellow card for Miralem Pjanic. With both teams down to 10, Napoli were only 2-1 down in the 84th minute when they were awarded a penalty. Their chance to secure a draw slipped away however when Lorenzo Insigne hit the post from the spot. Juventus were able to hold onto a 2-1 victory and extend their lead to 16 points as they look to lock up their eighth straight Scudetto. 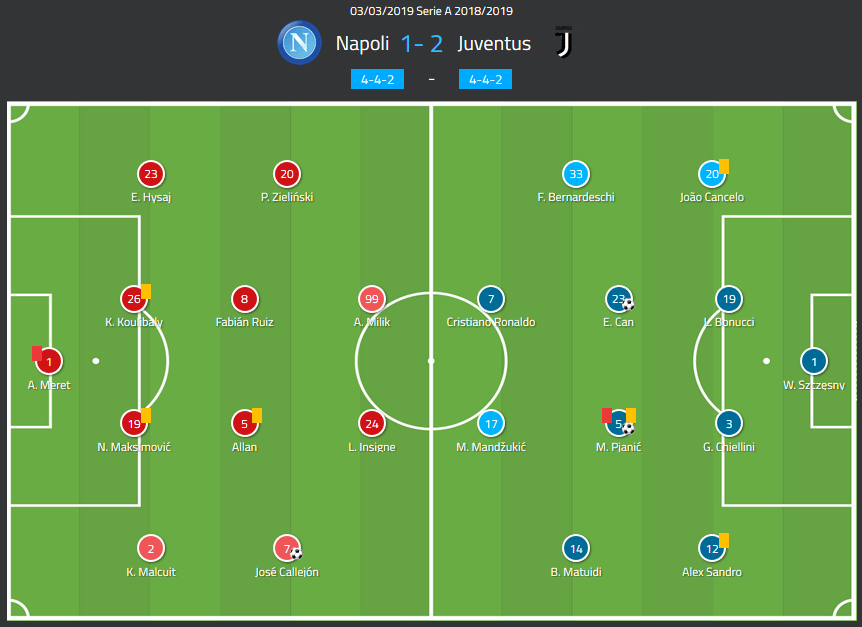 Carlos Ancelotti made only one change from the side that secured a 4-0 victory away at Parma the previous week. Lorenzo Insigne returned from suspension to replace Dries Mertens up front next to Arkadiusz Milik. Manchester United target Kalidou Koulibaly started at centre-back alongside Nikola Maksimovic, helping to form the second best defence in the Italian top tier.

Massimiliano Allegri made four changes to the side that struggled to a rather unimpressive 1-0 victory at the Stadio Renata Dall’Ara over Bologna. Most of the changes were in the back line. Wojciech Szczesny came back in goal for Mattia Perin, while Daniele Rugani was replaced by Giorgio Chiellini. Allegri moved Joao Cancelo back to right-back, sending Mattia De Sciglio to the bench. This meant Federico Bernardeschi moved out to the right wing, and Emre Can and Pjanic then came into the central midfield.

In this tactical analysis we will look at how Juventus lined up to limit Napoli’s attacking chances in the first half. We will also look at how Juventus struggled to create chances, and how Ancelotti adjusted his 10-man team to get the initiative back in the second half.

Juventus line up to frustrate

Juventus lined up for this match in the 4-4-2 that has become Allegri’s preferred formation since the arrival of Cristiano Ronaldo. Ronaldo played as one of the two strikers, alongside Mario Mandzukic. Mandzukic provided a physical central presence, and most of the defensive work-rate, while Ronaldo drifted across the pitch, looking to receive the ball on the half-turn so he could put the opposition’s defence under pressure.

In the midfield line, Blaise Matuidi lined up on the left side to provide the defence on that side and cover for some of Ronaldo’s defensive liabilities while Federico Bernardeschi was on the right side of the midfield. With the ball, this formation transitioned into a 4-3-3 with Matuidi moving centrally to help Pjanic and Emre Can. On the right, Federico Bernardeschi moved forward on the attack to join the forward line.

When Napoli had the ball, Juventus played in a fairly deep block, looking to close off space and force Napoli into wide positions. As a result, Napoli were unable to progress through the middle of the pitch as they typically do.

Their attack became lopsided, with the majority of their threat coming down their left side. Both of Napoli’s full-backs were very advanced, providing all the width as they played with two inverted wingers who were looking to move into central spaces.

As the ball progressed on the left side, Jose Callejon would make diagonal runs into the box to provide an option at the back post. This was shown in the image below, as we can see that Insigne has the ball on the left flank.

He crosses the ball towards the back post, where Callejon has made an outside-inside run that is very difficult to pick up. He slips in front of the Juventus left-back, Alex Sandro, and gets behind the Old Lady’s centre-backs to slot the ball home easily.

Juventus struggle but capitalise on set-pieces

In the 25th minute, a sloppy back pass by Napoli’s Kelvin Malcuit allowed Ronaldo to intercept the ball. Alex Meret came out to try and clear the hospital pass, but he missed and clipped Ronaldo as he moved past him. This was enough to earn the goalkeeper a straight red card, reducing Napoli to 10 men.

To make things worse, Pjanic was able to slot home the free-kick to give Juventus a 1-0 lead. Forced to withdraw Milik for backup goalkeeper David Ospina meant that Napoli played out the rest of the first half in a 4-4-1, with Insigne playing as the sole striker.

Even against 10 men, Juventus struggled to get on the ball. Napoli played at a higher tempo, with a more direct game plan through the wide players in Piotr Zielinski and Jose Callejon. They both made very direct runs into the channels, trying to get behind the Juventus back line that was now playing higher up the pitch. They had success with this, with Zielinski almost scoring immediately from the kick-off after the first goal.

Even though Juventus were getting more of the ball, they were still struggling to offer much of a goalscoring threat. Their second goal came in the 39th minute from a corner as Emre Can’s header sent Juventus into the break 2-0 ahead.

Although they played for 20 minutes with a man advantage, Juventus struggled to create chances. Most of their threat was as a result of set-pieces, and most of these came during these 20 minutes. As we can see from the chart below, all of Juventus’ threat came from 20-45 minutes in the first half.

While Juventus struggled to create chances from open play, they had success throughout the first half in moving the ball up the pitch. Napoli attempted to high-press Juventus, with Insigne and Milik applying pressure on the opposition’s back line while also trying to block passes into Pjanic.

Napoli’s press was well coordinated, but Juventus were able to progress the ball up the pitch through combination play, with Mandzukic and Bernardeschi playing an important role in supporting Ronaldo. This allowed Juventus to play the ball directly past the press to Ronaldo and Mandzukic, with support nearby to receive layoffs. This meant that could get the ball out of their own half and disrupt Napoli’s attack.

Napoli changes for the second half

After finishing out the first half in a 4-4-1, Napoli made a change at half-time to bring on Dries Mertens for Kevin Malcuit. With this substitution, Napoli moved to a 3-4-2 with a back-three of Koulibaly, Maksimovic, and Elseid Hysaj. The midfield of Allan and Fabian Ruiz remained unchanged, while Callejon played right wing-back and Insigne at right wing-back.

Up front, Zielinski and Mertens played centrally. Mertens was very mobile, looking to move into wide areas. He would often swap positions with Callejon, which made it difficult for Juventus to deal with.

Napoli came out looking to re-energise their attack, as they struggled after the red card in the first half. They got some help in the 47th minute when Miralem Pjanic picked up a second yellow card for an inexplicable handball in the middle of the pitch. With Juventus now reduced to 10, Matuidi moved into central midfield and Mandzukic moved out to the left wing.

This had a major effect on Juventus, as they now struggled to get out of their own half. Ronaldo was now the lone striker, and also lonely, as he had very little support around him. He struggled to retain the ball when pressured, which meant that Juventus defended ever deeper as the second half went along.

With Napoli tightening the screws, and staying higher up the pitch, the left and right-sided centre-backs (Koulibaly and Hysaj) joined in the attack. They would move up the pitch to play as wing-backs, allowing Insigne and Callejon to join the attack. With Callejon’s goal in the 61st minute, Napoli were applying all the pressure and Juventus were just trying to hold out.

Napoli had a chance to take at least one point for this match. They were awarded a penalty in the 84th minute, but Insigne hit the resulting penalty off the post and Juventus were able to escape with all three points. Napoli started this game strongly, but they had problems for 20 minutes in the first half after they were reduced to 10 and Juventus were able to score two set-piece goals.

In the second half, Napoli controlled the game and the league leaders held on. This was a match that Napoli should have won, but the way Juventus grind out the result shows why they will win their eight straight Scudetto.