The Premier League gets back underway this weekend following a short international break, with the pick of the games this weekend being the biggest game in English football- Manchester United vs Liverpool. Manchester United will be looking to put a dent in Liverpool’s title hopes while trying to put their season back on the rails, while Liverpool are looking to break the record for the most consecutive wins in the Premier League at eighteen. With two teams in such contrasting positions, it is bound to be an interesting tactical affair. In this tactical analysis, I’ll look at how both teams are likely to set up, how both teams can hurt each other, and how the game is likely to look.

In terms of tactics, I am expecting a pretty similar game this time round as we saw in February, particularly with United’s confidence so low at the minute. I’d expect Liverpool to have the majority of possession, with United looking to reduce Liverpool’s space as much as possible and then look to counter.

So how can United limit Liverpool’s space?

They did a pretty good job of this last time out in the goalless draw last February, but a fairly poor offensive performance from Liverpool certainly benefitted them. United lined up in a 4-3-1-2 shape and used a particularly effective tactic to hinder Liverpool’s build-up

This shape revolved around limiting Mohamed Salah and Sadio Mané’s use of the half-spaces, while also looking to prevent giving the full-backs too much space down the outside. We can see this shape below, where United end up in a flat line of almost six players, in order to compact that half-space as much as possible. Therefore when Salah receives the ball, the three players around him can get tight and prevent the ball from being played.

We can see the same shape again, immediately after the ball has been recycled centrally from a wide area. United have that same almost flat back six, which offers lots of defensive coverage and width, but not much depth, meaning Joël Matip can make an excellent run through the central area relatively unscathed before being fouled on the edge of the box.

Manchester United didn’t allow themselves to be this open from this kind of area too much in the game, however, and so Liverpool struggled to effectively penetrate the middle of the pitch, with lots of passes from inside to out getting stuck and forced backwards. In this next section, I’ll highlight Liverpool’s struggles in this area and a potential solution for this game.

How can Liverpool solve this?

The key to beating this particular tactic if United decide to utilise it again relies on something mentioned earlier, in that this system does have a real lack of depth to it. Liverpool failed to exploit this in the first game, which I believe was down a large amount to Roberto Firmino leaving the pitch injured early on. In the following examples, I’ll outline how Liverpool could utilise Firmino or the midfield to their advantage.

We can see below a typical example from the game of an area where Liverpool would often see their build-up halted by United’s shape. The red arrows indicate the pass which occurred, where Salah receives the ball tightly marked still relatively wide and close to the ball carrier. He is not allowed to turn by the defender and an eventual pass is blocked.

This obsession with finding Salah in the half-space became predictable, and Liverpool offered little threat elsewhere, and so instead of always looking to receive the ball in those half-spaces, the use of these runs and other runs as decoy runs could allow Liverpool to pin United’s backline in that shape seen below. Therefore Firmino can drop off and receive the ball in a central area with a better body position than Salah, turn and play to either of the other forwards. Shortly after this screenshot, Firmino was replaced by Sturridge, whose movement off the ball to aid the build-up is not his greatest strength. The run by Fabinho also pins Scott McTominay back, which helps create this space.

We see a similar situation here, where Liverpool insist on trying to play into the half-space, where Salah’s touch on this occasion and the ball is lost. A driven set pass back would allow Mané to run onto the ball and either drive into space or pick out runners in front of him. Again, runners from forwards or midfielders to pin players back are vital.

Through a good rest defence in possession and intelligent movements off the ball, Liverpool will look to sustain attacks and prevent counter-attacks through counter-pressing. A key part of sustaining these attacks is the role of Fabinho, who’s excellent positioning usually ensures he is usually on hand to win the first ball, or is positioned behind the ball in order to win the second ball. We can see an example here of the simple but effective role Fabinho plays, as Arsenal look to clear with a long ball and Fabinho is in a position to recover and start another attack immediately.

We can see another example here of Fabinho’s positioning, this time sealing the press and winning the ball back. This kind of positioning is vital when Liverpool counter-press at it covers either of the two aggressive pressing midfielders.

Liverpool’s centre backs are also likely to be aggressive in the counter-press as they were in the fixture in February, where Matip was particularly effective. In this example below, we see Matip push out and aggressively press Rashford to prevent the counter-attack and look to sustain an attack, while Fabinho covers him and follows a runner from deep. We will, however, come back to Fabinho and his concentration levels in recent weeks later in this analysis.

Against a depleted Manchester United side low on confidence, I would expect to see a high press employed by Liverpool, which they had some success with early on in the previous fixture.

Liverpool will employ their usual press within their 4-3-3 as illustrated below, with the two wingers cutting the passing lanes to the full-backs while pressing the central defenders. Firmino in the middle looks to prevent the pivot receiving the ball or presses the nearest centre back, while the two higher midfielders set traps and wait for their men to receive the ball before pressing aggressively. 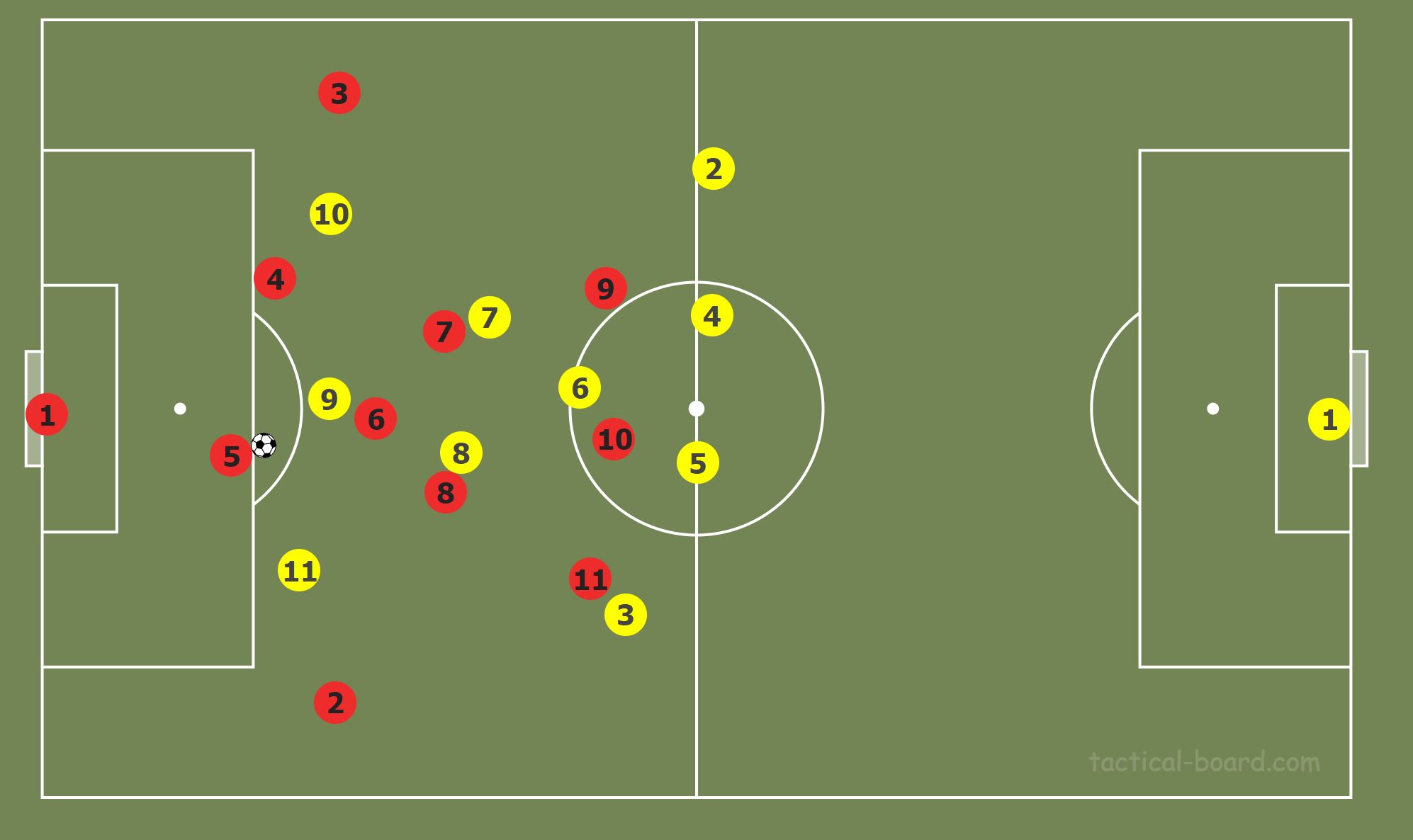 We can see this press in the February game below, slightly deeper on the pitch. Salah cuts the passing lane to the full-back and encourages the ball inside, while Firmino uses his cover shadow to prevent McTominay from receiving the ball. Therefore when Pogba receives, Henderson presses quickly and is able to force a turnover high up the pitch. With United’s players looking nervous at the best of times, a calculated, but aggressive high pressing approach could be extremely effective in my opinion.

How do United hurt Liverpool?

Liverpool are often a side considered to have no real weakness, which is something I agree with however that doesn’t mean you can’t hurt them. For me, the weak link defensively in the team is Alexander Arnold, who at times is capable of doing some excellent defending, but on the most part relies on his speed to get himself out of difficult situations. Another weakness people highlight is the space in behind, but it is incredibly difficult to firstly play the ball over the top of the defence effectively, and for the runner to then be onside and outrun any of the quick defenders to the ball.

The most effective way to attack Liverpool this season seems to be in transition, but the offensive quality and pace has to be there to have any chance. The most effective strategy for United I feel would be to look to start attacks with short, quick passes received behind Fabinho. United have the best chance at progressing with the ball from these kinds of situations, and if they can win the first ball, they may be able to create opportunities using their pace if their combination play is good.

We can see an example of this below, where Fabinho loses concentration and is attracted to press the wrong player, and so is drawn out of position. This allows Minamino to receive the ball, turn and drive at the defence before setting up a goal.

We can see another very recent example here, where Fabinho again loses concentration for a split second and Leicester get the ball in behind and drive at the defence. In moments of transition, it is vital that United can get players to create angles to receive in this kind of area quickly, as if they are too slow, they will be counter pressed and the opportunity will be gone. I’d expect United to combine this along with looking to target and isolate Alexander Arnold in 1v1’s as their main offensive weapons.

Fabinho is no doubt a world-class player, but a combination of a lack of concentration, and good offensive movement from the opposition has punished him in recent weeks, and Klopp will certainly have worked on it this week I believe. 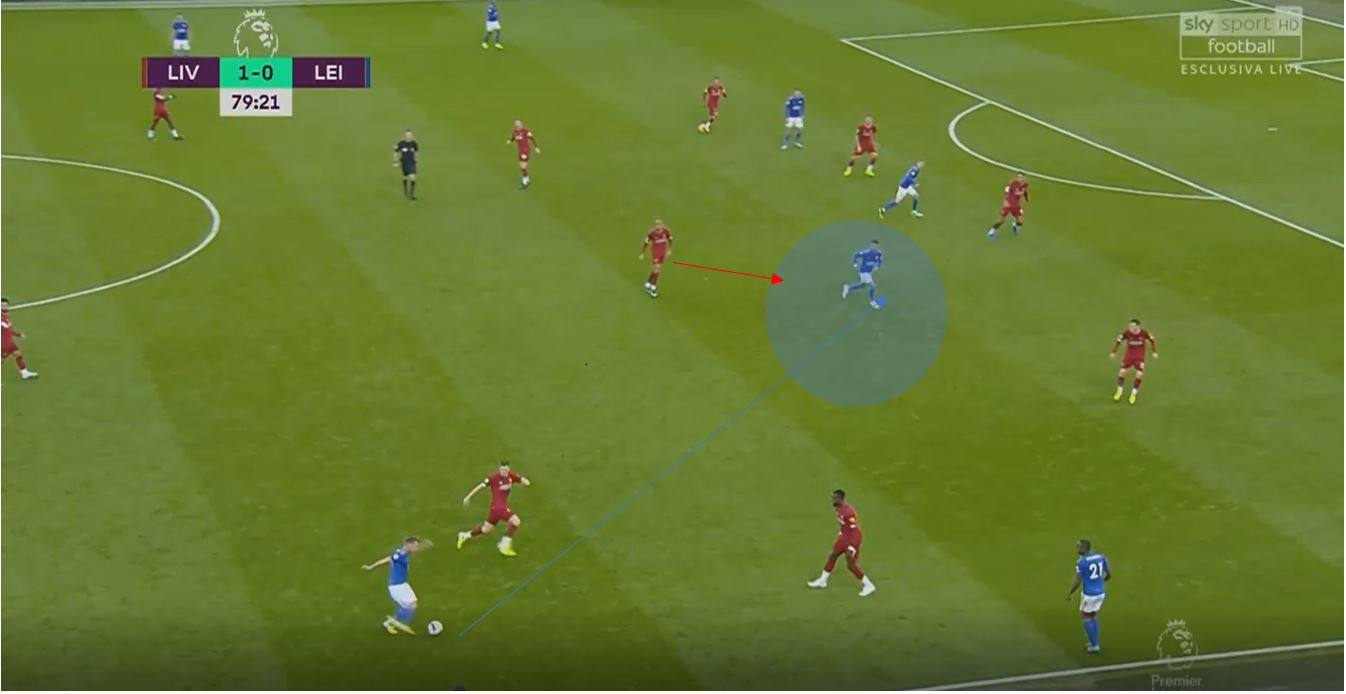 One of Liverpool’s corner routines could be quite effective against United if recent performances are anything to go by. The routine I’ve identified is Liverpool’s second phase corner, where the ball is played out and then back in, in order to create a better angle for the cross and ideally look to get a header in a better position.

We can see the routine below, with a key principle being making deep runs at the back post, where the angle and timing of the run is easier as the ball is traveling for longer and therefore deeper untracked runs can be made. Notice how both Matip and Van Dijk are positioned at the back post for the routine.

Manchester United were very nearly caught out from such a routine against AZ, who scored from this situation but were offside. AZ here don’t make any real runs, but with Matip and Van Dijk making runs into the back post and heading either at goal or across to the near post, problems could be caused. The height of the players occupying that area at the back post would also be a concern for United.

This final example shows again how Liverpool may look to exploit this. The Wolves player who receives this ball doesn’t cross it in, however, Andy Robertson certainly would have either on his first touch or his second touch here. We can see a space at the back post, and we can also see how deep United are considering that player on the edge is on his second touch. If Liverpool’s tall players are able to win any kind of header on the edge of the six-yard box, they could pose Man United trouble.

This is an intriguing game in terms of tactics and psychology, with two teams in completely different situations both looking for a good result. I’d expect Man United to look to play on the counter and remain compact and would be very fearful of them in transitions if they decide not to do this, and the key in the game for me is whether Liverpool can find that early goal to scupper United’s gameplan early on, and slowly start to grind down that block and pick up three points.