This match served as notice for all clubs of the need to continuously recruit and construct their squads effectively. It is not that long ago that Manchester United and Arsenal were the top sides domestically in England. Now they have fallen to the extent that they are challenging to finish in the top six, never mind the top four. Both sides have experienced a degree of upheaval in terms of their coaching staff but they have also struggled to recruit effectively with little evidence of either side having a cohesive plan.

Going into this match the pressure is starting to build on both Ole Gunnar Solskjaer and Unai Emery as the likes of Liverpool and Manchester City continue to pull away at the top of the table. Three points in this match for either side would be key in allowing the winner to keep touch at the top of the table. In the end, neither side managed to find the winner in a 1-1 draw and in truth neither side actually deserved to win the match.

In this tactical analysis, we will examine the key tactical talking points from this match. 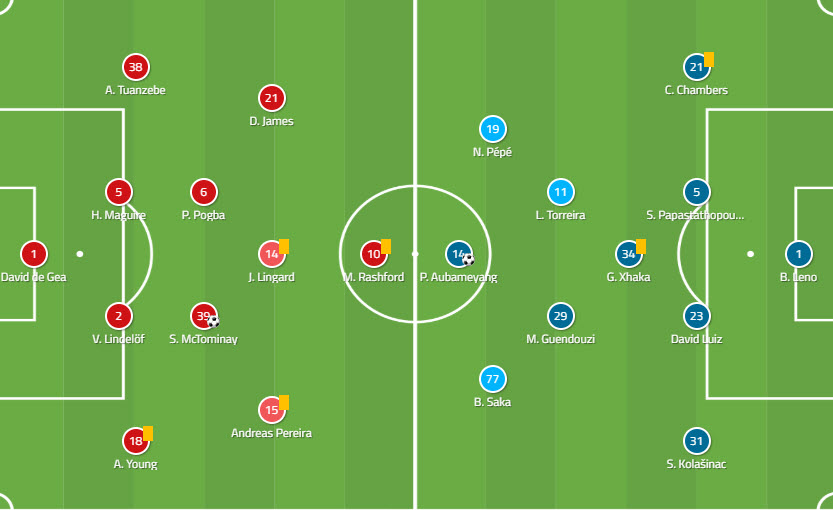 The most striking piece of team news for Manchester United saw the young academy graduate Axel Tuanzebe come into the match at left-back. Predominantly a central defender he was forced out into the fullback position due to the injury to Luke Shaw and the need for Ashley Young to move to right-back in place of Aaron Wan-Bissaka.

Marcus Rashford continues as the 9 for United although the match raised concerns that the young England striker is carrying an injury. 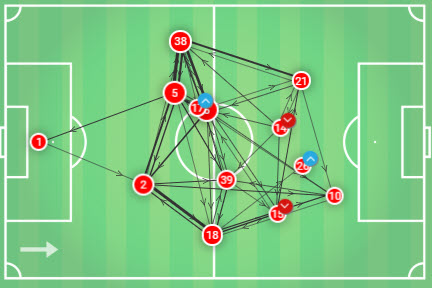 The pass map shows the issues that United had in their ball progression. There was a gap between the midfield and attack that saw them look to play more direct passes up to the forward as opposed to progressing the ball steadily and securely through the thirds. Tuanzebe was very much defensively orientated throughout and did not provide any real width to the attacking phase.

The Arsenal team news surrounded two key decisions from coach Unai Emery as Lucas Torreira came back into the heart of the midfield and the introduction of the 18-year-old left winger Bukayo Sako. Nicolas Pepe and Pierre-Emerik Aubameyang continued to build on their partnership in the attack. 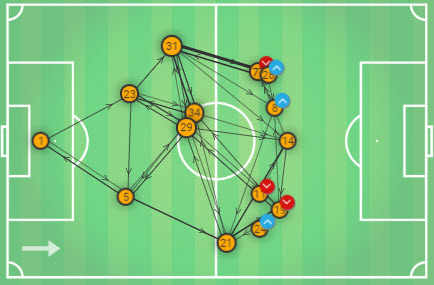 Similar issues with Arsenal as again their midfield unit was ineffective in aiding with ball progression. They were often positioned to receive the ball in front of the defensive block from United and receiving the ball in these areas meant that they did not break the lines of the opposition.

As mentioned above there was a real issue with the way that Arsenal looked to progress the ball forwards. The three midfielders for the away side, Lucas Torreira, Granit Xhakha and Matteo Guendouzi are more comfortable taking possession in deep areas and then looking to pass forward. They were missing the player who would move into more advanced pockets in order to accept possession from those midfield players, a role that Dani Ceballos would have been perfect for. 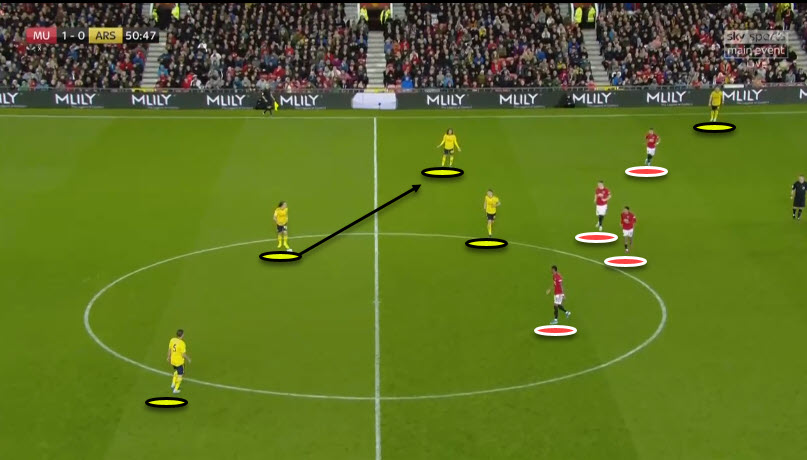 We see this above with both Guendouzi and Xhakha in shot ahead of the entire United block. Guendouzi has dropped back to the left-back role to accept possession of the ball from David Luiz. This allowed Sead Kolasinac to move higher from the left-back position but there is still no central option to connect the ball vertically. This made the build-up play from Arsenal relatively predictable as they circulated the ball across the defensive line before looking to access the fullbacks in the wide area. Alternatively, they would play more direct first passes to reach the strikers while bypassing the midfield. 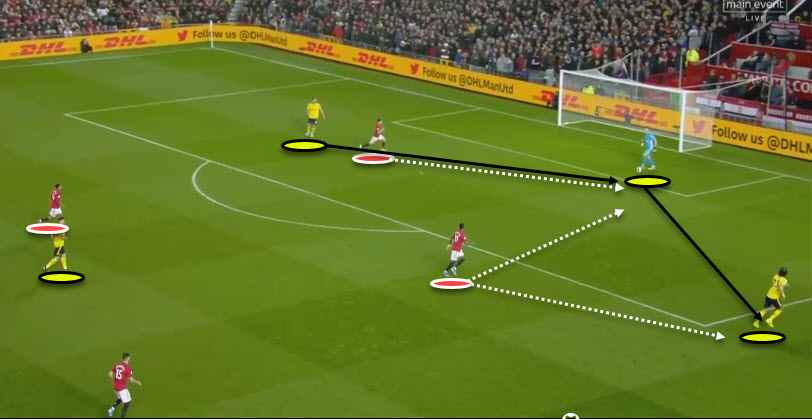 We also saw Arsenal continue with their efforts to play out from the back regardless of the pressure that they were being put under by the press from United. Unai Emery seems to be intent on forcing this tactical mechanism on his team despite not having the players to perform this effectively. We see this above following a free kick in their own penalty area. The ball was originally played from goalkeeper out to Sokratis at right centre-back before switching back and then across to David Luiz at left-sided centre-back. As the ball circulated across the penalty area United pressed aggressively. Daniel James pressed from the left to challenge Sokratis and then follow the ball back to Leno. Rashford was then positioned to pressure Luiz as he received the ball or cut back to press Leno if the goalkeeper wanted to retain possession.

When the ball did come out from the first line Arsenal suffered the same issues as discussed above with little depth to their midfield they found it difficult to play through to the forward players. This slowed their attack down and made it easier for United to effectively defend against their threat.

If Arsenal had structural issues that prevented them from progressing the ball then United had more profound issues in all phases of the game. This United team still feel disjointed, almost as though they are playing as three separate units as opposed to a single team that moves and works together. 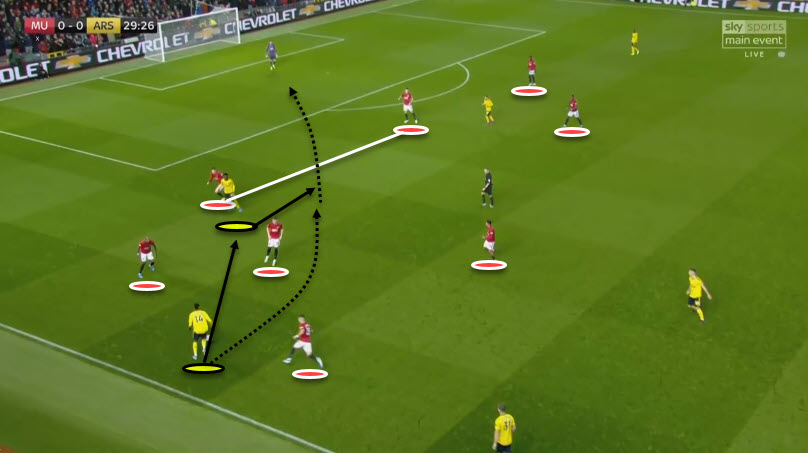 We see this in the image above with an exceptionally poor defensive orientation from United. The two central defenders have lost their focal point as Aubameyang has drifted to the left-wing to take possession of the ball. Harry Maguire is free and Victor Lindelof has moved across to cover the threat of Saka. The issues here is with the gap between these two defensive players. In general, a gap like this is manageable if a midfield player will drop to sit in front of the space to prevent it from being used as a passing lane.

Instead, the midfield for United is flat and Scott Mctominay and Paul Pogba are both poorly positioned with one on the near side and one on the far side. A simple one-two allows Arsenal to bypass the entire defensive structure for United. 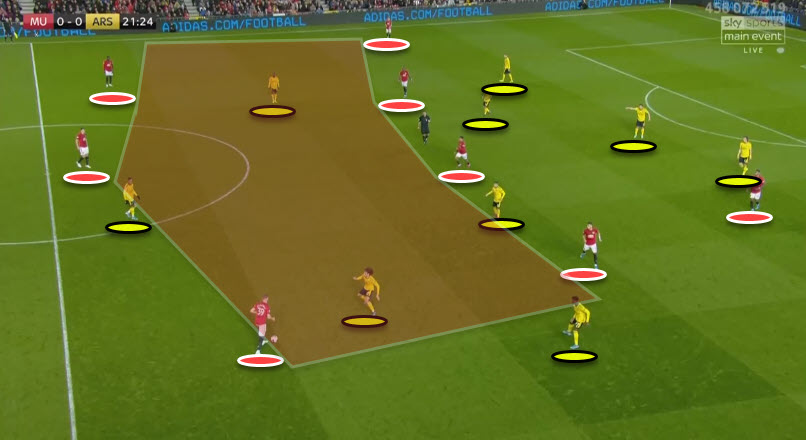 We see further structural issues for United in the image above. With the ball in the right-back position, they are looking to progress the ball into the final third. Five players have advanced forward to a higher line but there is nobody in the empty space where they could connect the ball and progress safely up the pitch.

With Mateo Guendouzi closing down the ball, there is no option for a direct pass beyond the empty space and instead United lose possession of the ball in a dangerous area. Again the midfield for United was ineffective with Pogba continuing to take up positions that do not help the team and Mctominay displaying poor positional awareness.

You can make the argument that Arsenal deserved more out of this game simply because they were the better of two poor teams. If there were issues in the rest of the Arsenal side then the front three still impressed in patches as they controlled space well in the final third. This was primarily down to the quality and threat of Aubameyang whose movements caused constant issues for United. 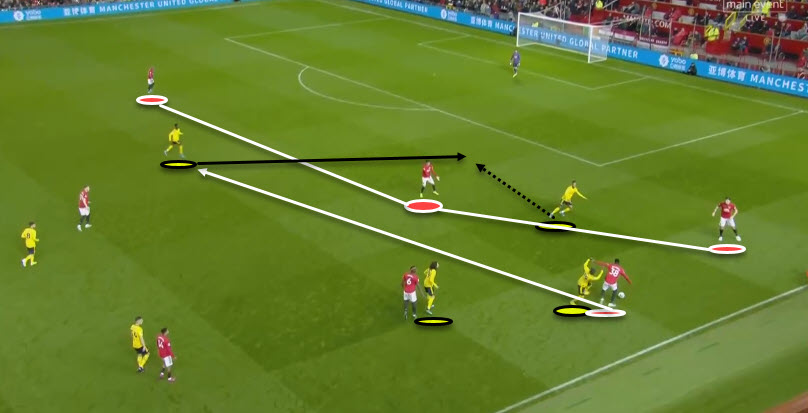 We see this above, as well as a continuation of the structural issues from Arsenal. This was the build-up for the Arsenal goal even though United are in possession of the ball. Arsenal are pressing heavily and they are man to man against United ahead of the ball. There is no easy passing option and the man in possession plays across the face of his own goal instead.

This is where Arsenal’s attacking structure comes into play. As Saka takes possession having moved inside the movement of Aubameyang allows the ball to be played through for an easy finish, after a VAR check. 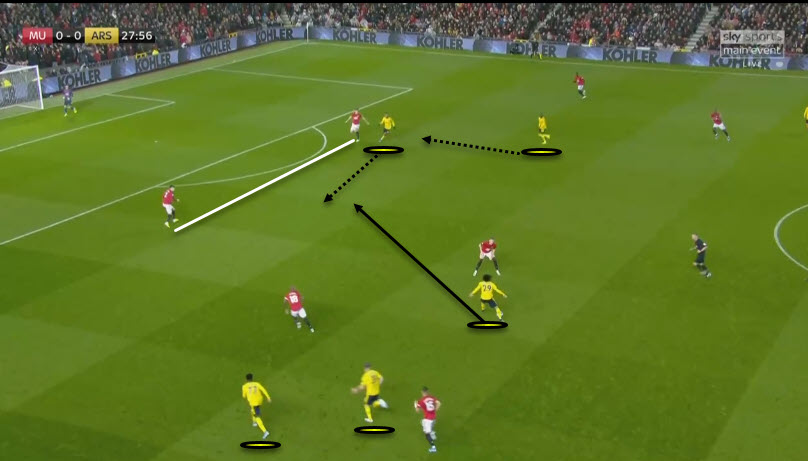 We see this movement again from Arsenal in this example. Once again the central defenders for United are stretched and isolated as the opposition transition into attacking areas. You also again see the problems in midfield for United as Pogba is out of position on the ar side. As Aubameyang moves across towards the ball he pulls Harry Maguire with him and Pepe is able to move higher into that field. These movements were designed to create overloads and allow Arsenal to threaten the penalty area.

In truth, this match was exceptionally poor both as a tactical battle and as a spectacle for the watching public. Neither side displayed the capacity to create genuine goalscoring chances and neither was able to take control of the midfield due to their own failings combined with strange coaching choices.

This was the opportunity for either coach to cement his position and appease increasingly anxious fanbases. Neither managed to do so.