In their first home match of the 2019/20 season, Arsenal played against Burnley. The match ended in a 2-1 victory for the home team. The Gunners’ performance was impressive enough although far from dominating. Burnley approached this match like they usually do away matches – with a defensive state of mind. They generated a surprising amount of good shots but the superior finishing of Pierre-Emerick Aubameyang and Alexandre Lacazette meant that the Gunners took home all three points. In this tactical analysis, we take a look at how the match played out as well as the key highlights in terms of tactics. 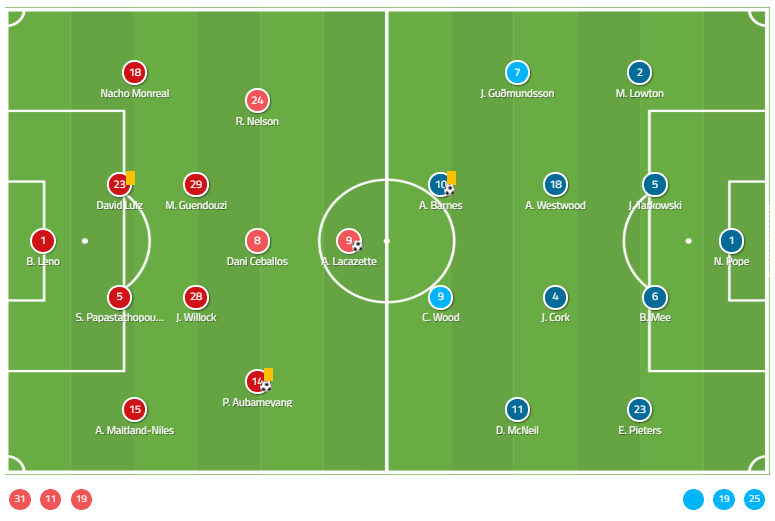 David Luiz made his Arsenal debut; Unai Emery evidently preferring him to Calum Chambers for a stronger presence to deal with the physical threat expected to be imposed by the Burnley forwards. In midfield, Dani Ceballos started instead of Granit Xhaka, the latter currently suffering from a minor back injury. Alexandre Lacazette returned from an ankle injury to start as the central striker.

Sean Dyche lined up Burnley in the exact same manner as their last win against Southampton (check out this analysis), making no changes. A flat 4-4-2 with Chris Wood and Ashley Barnes as the forwards and a midfield double pivot of Jack Cork and Ashley Westwood.

Arsenal had lined up in a 4-2-3-1 but this was a lot different from their usual system. The difference was all due to one man – Dani Ceballos.

In him, Arsenal had added a very young and well-rounded midfielder to the squad – you can read more about him in this analysis.  Additionally, Joe Willock started as the number #6 on paper. As a result of these two additions, Arsenal played a very flexible midfield. The midfield trio rotated in and out in an attempt to beat the press. The base formation was still 4-2-3-1 as can be seen below. Ceballos defaulted to his #10 position during the initial minutes of the match. However, his strength lies in his on-the-ball ability and mobility in possession.

Additionally, in this particular match, Emery allowed his pivot to move wider off each other. This allowed them to overcome the two-man press of Burnley. It also created space for Ceballos to drop and receive the ball as the positioning of Matteo Guendouzi and Willock meant that the forwards had to split up. It also allowed Willock to relive the press on Ainsley Maitland-Niles using some smart positioning. This can also be seen below. Notice how Willock’s position is such that he pulls Greenwood (shown with the white arrow) very narrow and in turn creates more space for Maitland-Niles. 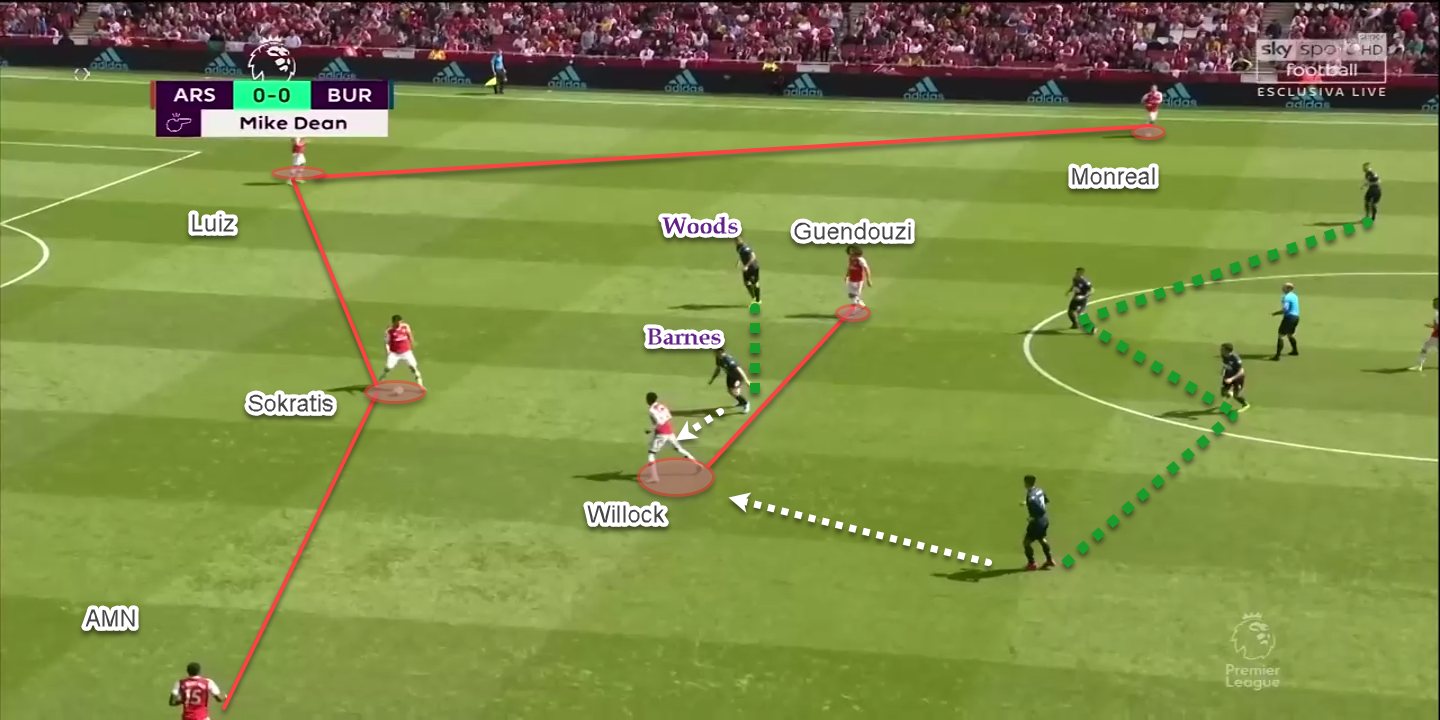 Arsenal also tried another way to beat Burnley’s press within their own third. One of the deepest midfielders – mostly Guendouzi would drop centrally to receive from the centre-backs. This would draw them closer and hence create space on the flanks. This method of baiting the press can be seen below. 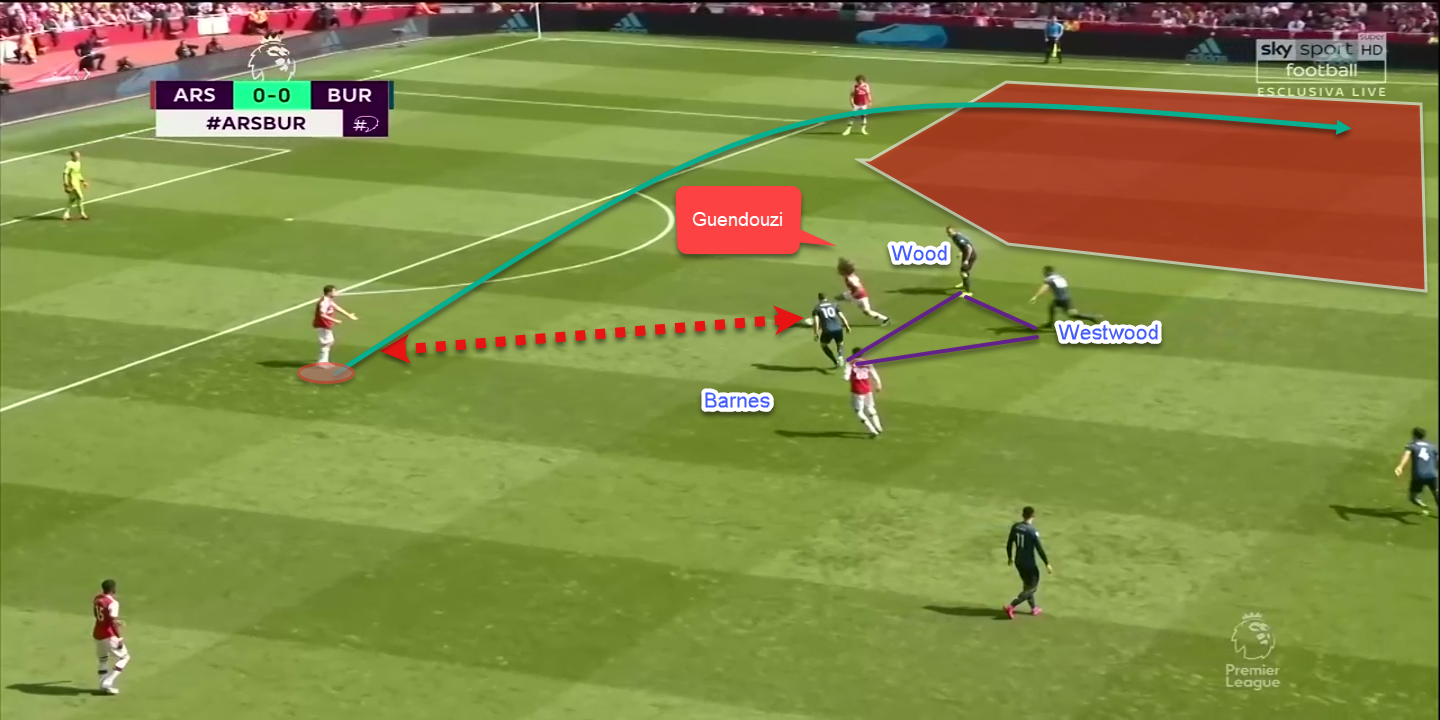 Once one of the Burnley midfielders would ‘jump’ to press, the ball was quickly lofted over to the full-back, who’d move higher along the wing. This didn’t produce much success as even when Burnley jumped to press, the other three midfielders always moved over to cover the space left behind.

In their own third, during goal-kicks, Emery took full advantage of the new goal-kick rule. Leno went long only once and on every other occasion, Arsenal tried to build their way out from the back. When they had the ball, Luiz and Sokratis split up. The full-backs pushed up higher than the deepest midfielders and the midfielders themselves dropped centrally – usually in a staggered option (so that they weren’t pressed cover-shadowed easily). Leno preferred Luiz and for an obvious reason – the Brazilian’s quality on the ball is undeniable. From there, Luiz passed to the full-back who’d then play it down the line to the winger or striker dropping to receive.

Burnley tried to press Arsenal high but weren’t able to display any semblance of good pressing structure. In the illustration below, notice how Burnley’s midfield has moved up to press but the defensive line is still very deep. This creates a huge gap in between the lines. Nelson is caught off-side here but such mistakes don’t usually go unpunished at that level. 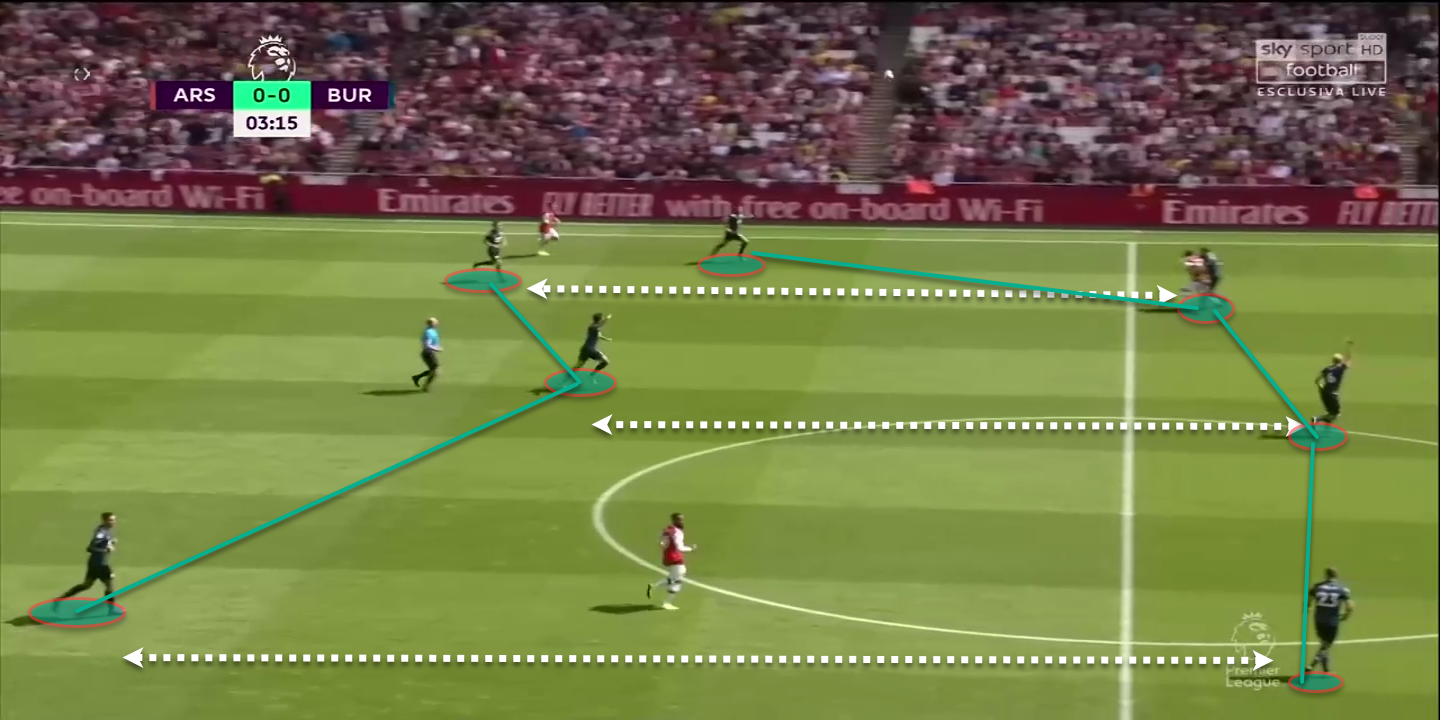 Once in the middle third, Dani Ceballos’s presence became instantly noticeable. While previously Arsenal had lacked a progressive press-resistant midfielder, Ceballos gave them that option. He started in the attacking midfielder berth but he was given a very fluid role. From that position, he often dropped in between the lines to receive and carry the ball into the final third. There were certain doubts in my mind about his role in a team dependent heavily on wing-play but he added a much-needed central option. For instance, in the picture below notice how he carries the ball in the left-half-space. He dribbles at the Burnley defender and instantly creates space for Monreal. He then turns centrally, combines with Nelson for a quick vertical interchange and then fires a shot aimed at the top right corner.

Apart from Ceballos, there were other tactics used as well to break the Burnley low block. For instance, Lacazette would often drop in-between lines to receive and play one-touch passes with Nelson. This can be seen in this illustration below. The move breaks down in this play but Arsenal tried to often create danger via the striker’s dropping movements into space – to either hold up the ball or to combine and create space via runs into space.

Burnley’s 4-4-2 low block is nothing new – they’ve been troubling attacking teams for years now. However, I’d like to discuss a particular aspect of the block – defending the flanks.

Reiss Nelson played on the right-wing in the first half. From that position, Nelson often likes to drift into the half-space. This is because it opens up a lot more passing options for him – he can either take on his man and use the width to help him or he can cut inside centrally. Burnley tried to counteract this by almost hemming him in whenever he looked to drift centrally. Whenever Arsenal had the ball on the left flank, he was surrounded by the full-back, the centre-back, the winger and the right-sided-midfielder. This can be seen in this picture below. 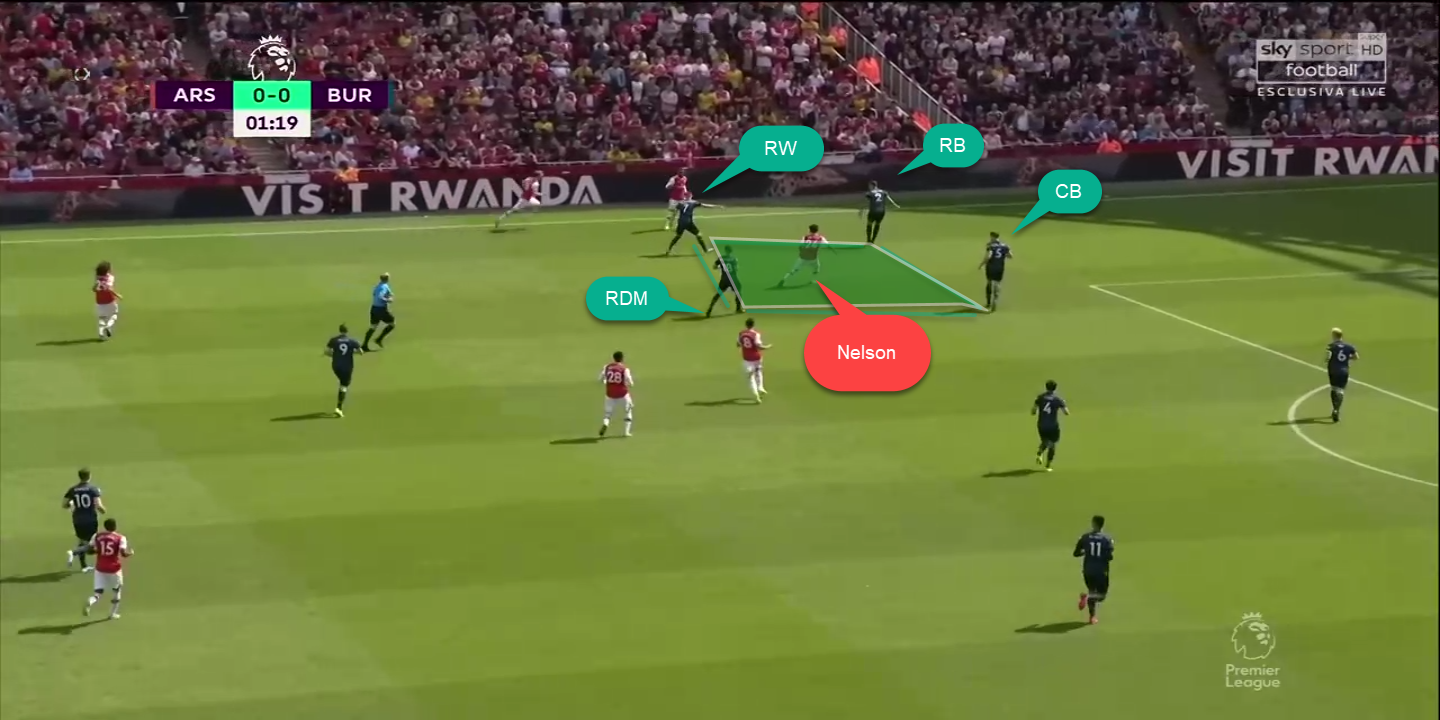 He was thus denied any space and was unable to combine with any players. Moreover, that also closed off the left flank for Arsenal since that was so heavily protected. Obviously defending one flank so well would mean that some other area of the pitch is exposed. With Burnley, that was their left flank. However, Arsenal hardly ever switched the play and hence, failed to take advantage of the underload on the far-side.

Having dominated 68% of the possession, Arsenal still ended up conceding 13 shots from inside their own box and an additional of 5 from outside. Clearly, the defence is an issue Arsenal are yet to resolve. The addition of David Luiz has been great in terms of improving the overall quality of the possession-play but can he fix Arsenal’s tendency to leak high-quality shots? Not really. For once, he was himself at fault for the goal that Arsenal did end up conceding – he failed to mark his man inside the box from rest defence.

Guendouzi is another player who looks like a defensive weakness. He’s often slow to recover when Arsenal lose possession and even when he does trackback, he is slow in making his challenge, jockeying when he should be getting tight and disrupting the player’s movements. Check this example below – 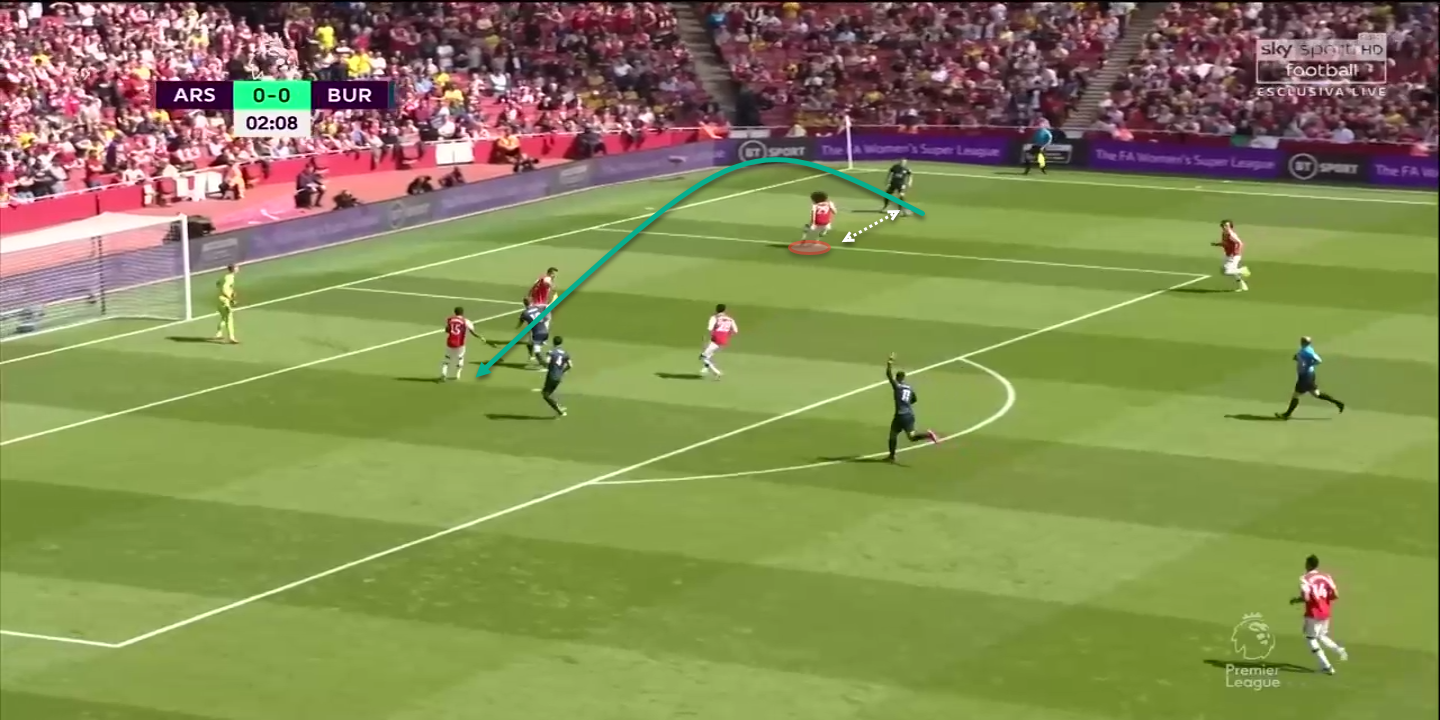 Guendouzi is in front of the man but he’s waiting for the player to make his move. However, the opposition player simply crosses into the box where there’s a 2v3 (with another player arriving imminently and unmarked).

Admittedly, Burnley is a tough test for any defender – in the little time Burnley had the ball, they attempted 30 crosses into the box. Their physical game-plan can be a little overwhelming and overall Arsenal look better than last season’s end if one is to go by the small sample size.

Often times, the chink in the Gunners’ armour was all so apparent. Arsenal have a lot of areas to work on (apart from the ones discussed above). For one, their attacking versatility has improved a lot with the arrival of key players in important positions but they still haven’t assimilated everyone yet. Despite all their dynamism in midfield, Arsenal were still very one-dimensional in the final third. Resorting to only low crosses or cut-backs is not the best source of chance-creation but if you’re only completing 17% of your crosses, that spells disaster.

Burnley on the other hand also need to work on almost the same issues – adding more sources of chance-creation. To say they depend on crosses to attack would be an understatement. Both teams face Liverpool in the next two games itself and the test doesn’t get any sterner.