The FIFA Women’s World Cup 2019 final is upon us with the USA squad chasing their fourth star as the heavy favourite while the Netherlands are in search of their first star. This tactical analysis will look at the lineup decisions for both coaches. Also, the enormous challenge of avoiding an early deficit for the Netherlands, and how they could tactically win the World Cup.

Netherlands coach, Sarina Wiegman, has been consistent with her system of play for the entirety of the tournament. Wiegman is facing two important lineup decisions. The first decision concerns the health of forward Lieke Martens. Martens started the match against Sweden but was forced to be subbed off at the half. The highly decorated Barcelona player will likely get a chance to start. It would be a surprise if the 2017 FIFA Women’s Player of The Year winner and 2017 UEFA Women’s Euro Player of the Tournament is on the bench to start the match. Martens has likely earned the opportunity to start even if she isn’t 100%.

The second decision for Wiegman is whether to start forward Shanice van de Sanden or Lineth Beerensteyn. Both players have featured in all six matches for the Netherlands. Beerensteyn got the start in the Sweden match while van de Sanden started the first five matches of the tournament. Beerensteyn has a goal and an assist in only 175 minutes played while van de Sanden has zero goals and one assist in 415 minutes. This is the only position unsettled due to performance heading into the final.

Look for van Veenendall to be in goal with a backline of van Lunteren, van der Gragt, Bloodworth, and van Dongen. The midfield will likely be van de Donk, Spitse, and the goalscorer versus Sweden, Groenen. The attacking trio is the most up for grabs but I think ultimately Wiegman will go with the experienced trio of Martens, Miedema, and van de Sanden.

Even though USA coach Jill Ellis has played every field player on the roster, the heavy minute contributors are well set. Similar to the Netherlands, the USA coach faces two critical lineup decisions. Both of the USA decisions are solely due to injuries and not performance.

The first is the health of forward Megan Rapinoe. She was the shock omission from the USA vs England match due to injury. Rapinoe has scored five goals and has two assists while playing in four of the six matches. Her replacement for the England match, Christen Press was sensational scoring in the 10th minute. Rapinoe will be the favourite to start if at full health, but if she cannot then Press is a more than suitable replacement. Christen Press has 122 caps and 49 international goals.

The second lineup decision facing Ellis centres on the health of Rose Lavelle. Lavelle has started five matches and is a key player in the USA buildup. The entire tournament, the toughest lineup decision for Ellis has been in midfield. Ellis has juggled Lindsey Horan and Samantha Mewis in midfield as Lavelle and Julie Ertz have been mainstays for the other two midfield positions. If Lavelle is not cleared to play, look for Horan and Mewis to join Ertz in the USA midfield lineup.

My predicted lineup is Alyssa Naeher in goal with a back line of Kelley O’Hara, Abby Dahlkemper, Becky Sauerbrunn, and Crystal Dunn. The midfield trio of Horan, Mewis, and Ertz. The forward line of Tobin Heath, Alex Morgan, and Megan Rapinoe.

The biggest challenge for the Netherlands is not conceding early. The USA team has scored early in every single match. They have scored in the 12th, 11th, 3rd, 7th, 5th, and 10th minutes. That is six matches with the latest they have scored was the 12th minute versus Thailand in a match that ended 13-0. The USA has dominated the tournament because they have always been ahead early. Score and time have been advantage USA in every match.

In the USA vs England game, we see the USA squad come out with their typical aggression and intensity. Below we see England with a great transition moment early in the game. The ball carrier is facing forward with two runners attacking the high USA backline. 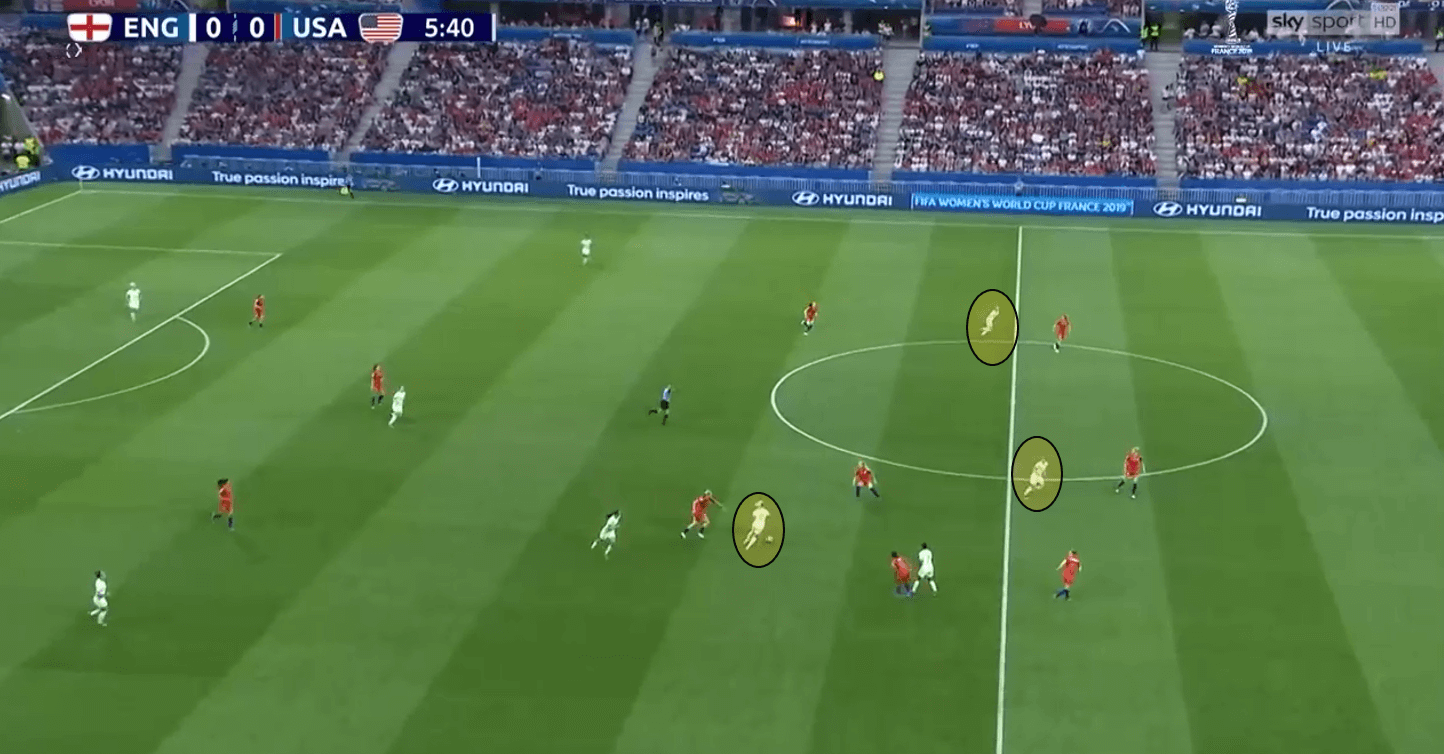 Instead of a ball into space, the pass is played into feet. A dangerous situation for England is converted quickly into an attack for the USA team. Dahlkemper intercepts the pass and finds Lavelle in wide open space. 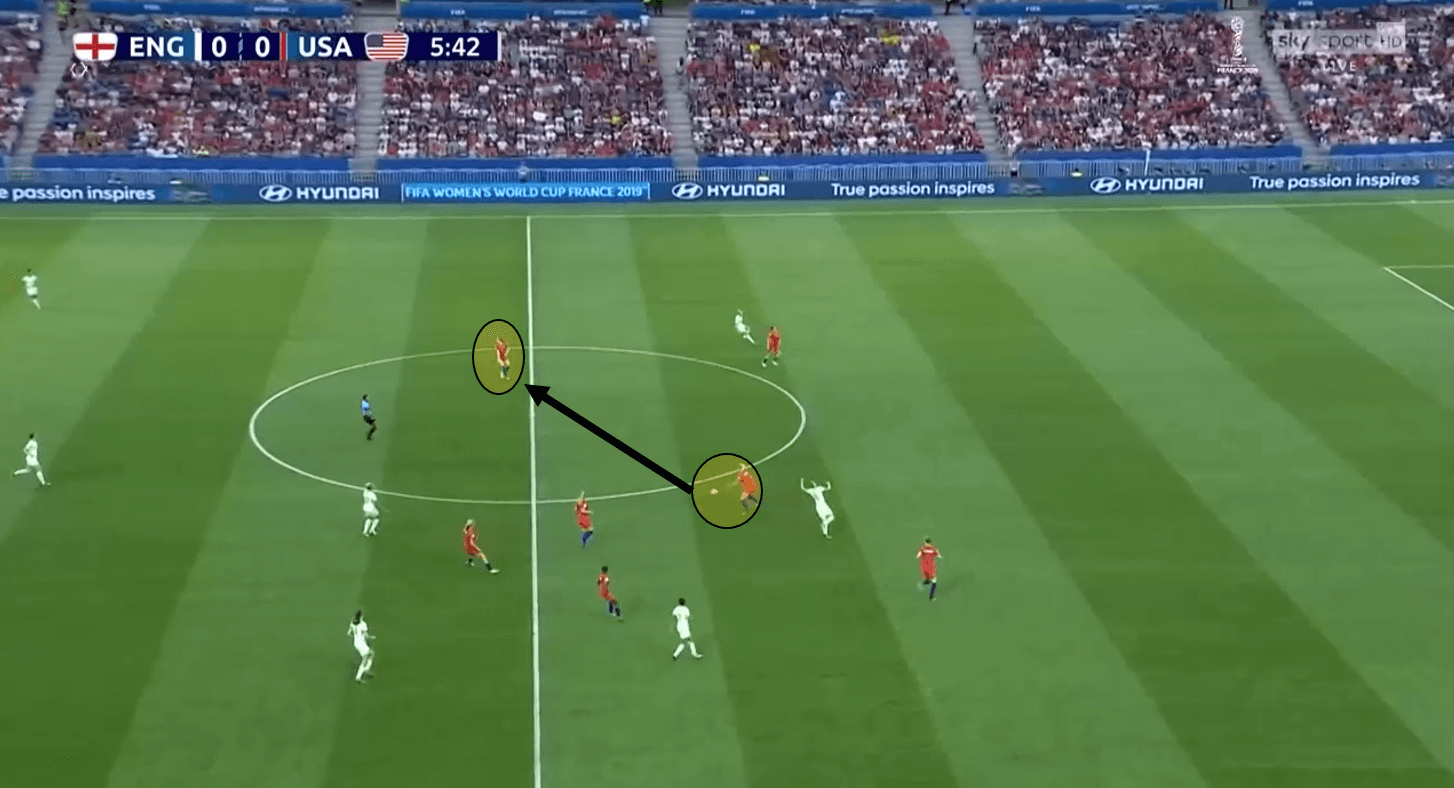 The USA team immediately progresses down the sideline and aggressively commits players forward. Below we see O’Hara play the pass to Heath on the sideline with USA players queuing up in the box. Tactically the USA squad commits numbers into the attack in the early minutes. Here it is six Americans vs eight England defenders. 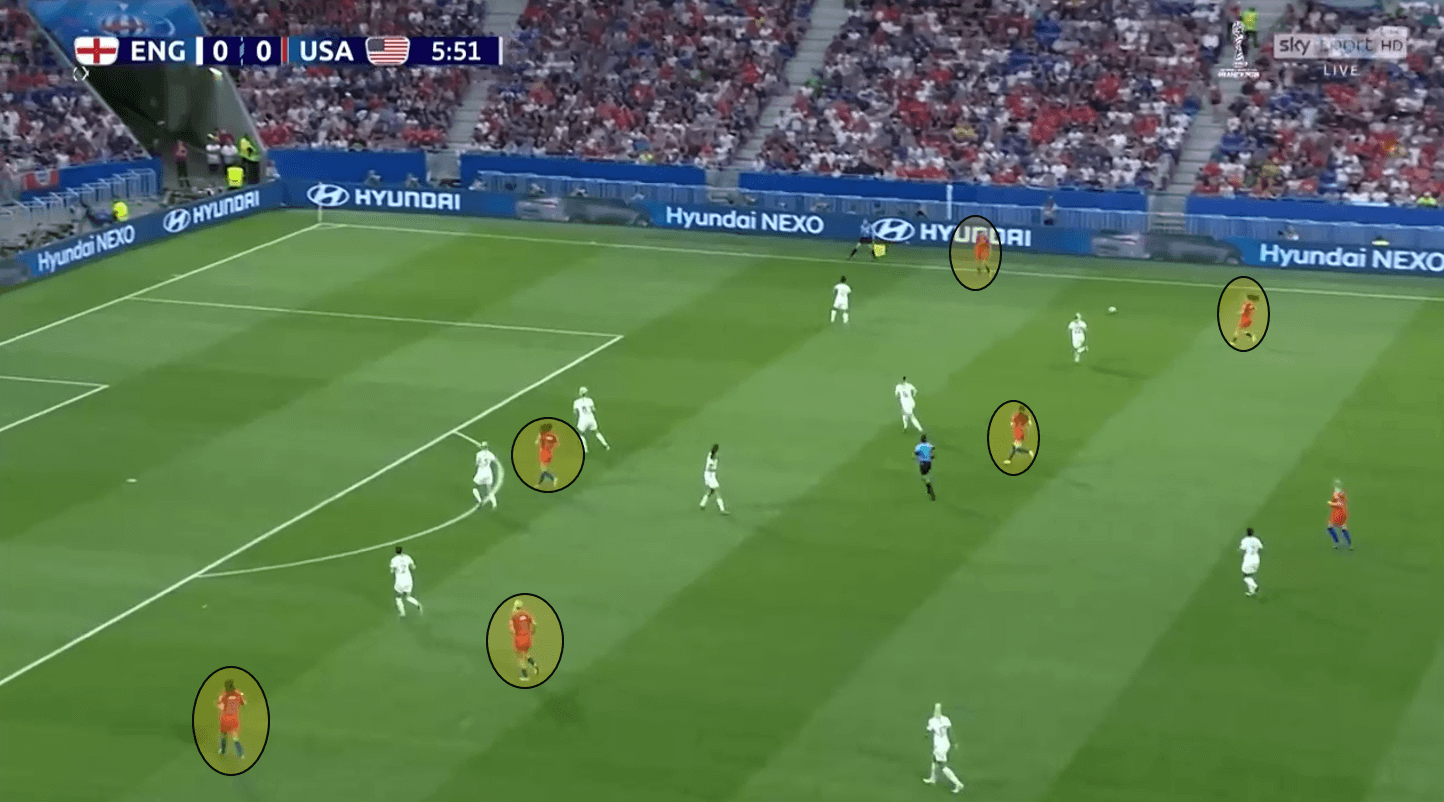 O’Hara swings in a cross with three USA players waiting in the box. 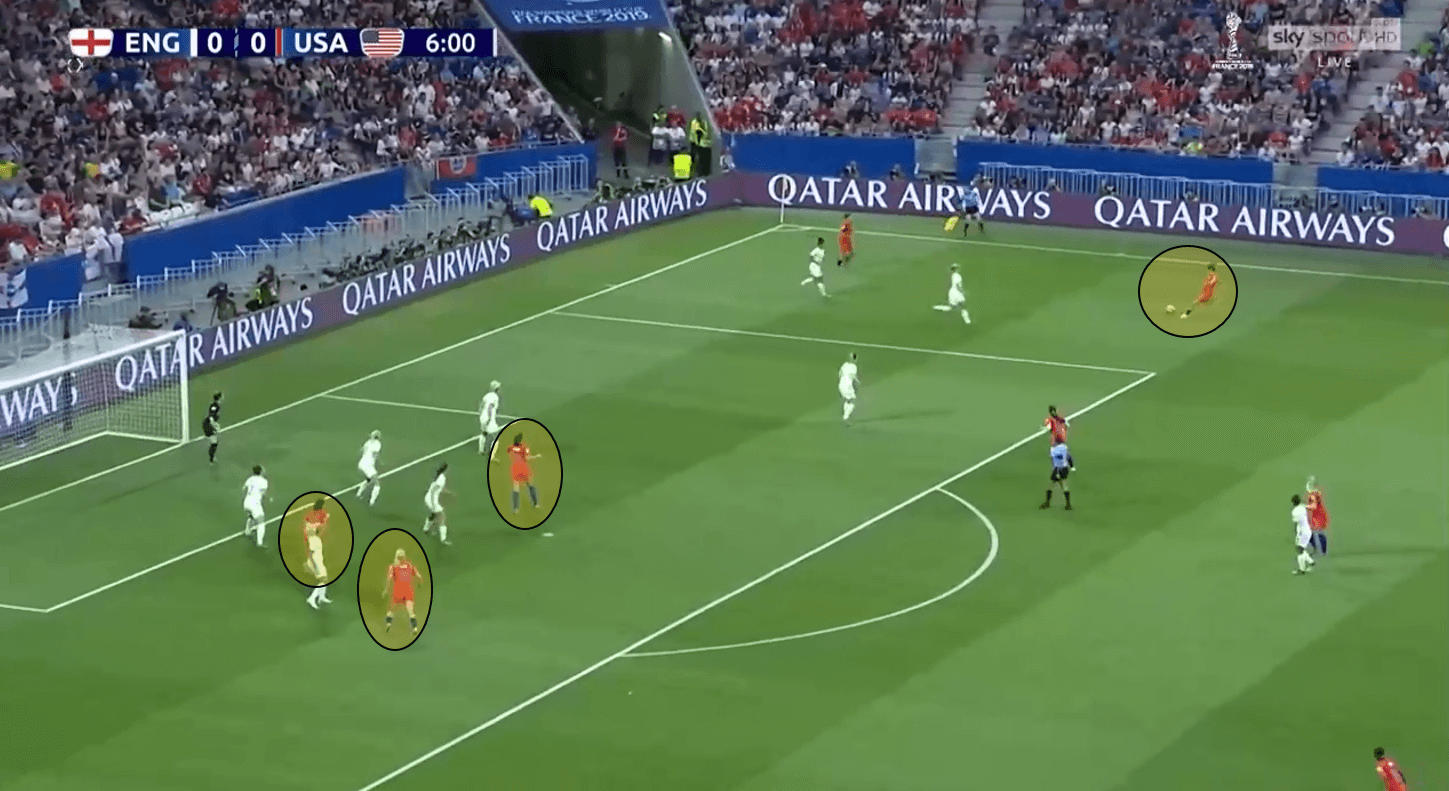 The England keeper, Carly Telford, gets a hand on the cross but note the three USA players positioned to pounce on the rebound. The USA team has a strategy of flooding the box with attackers and jumping on loose balls. 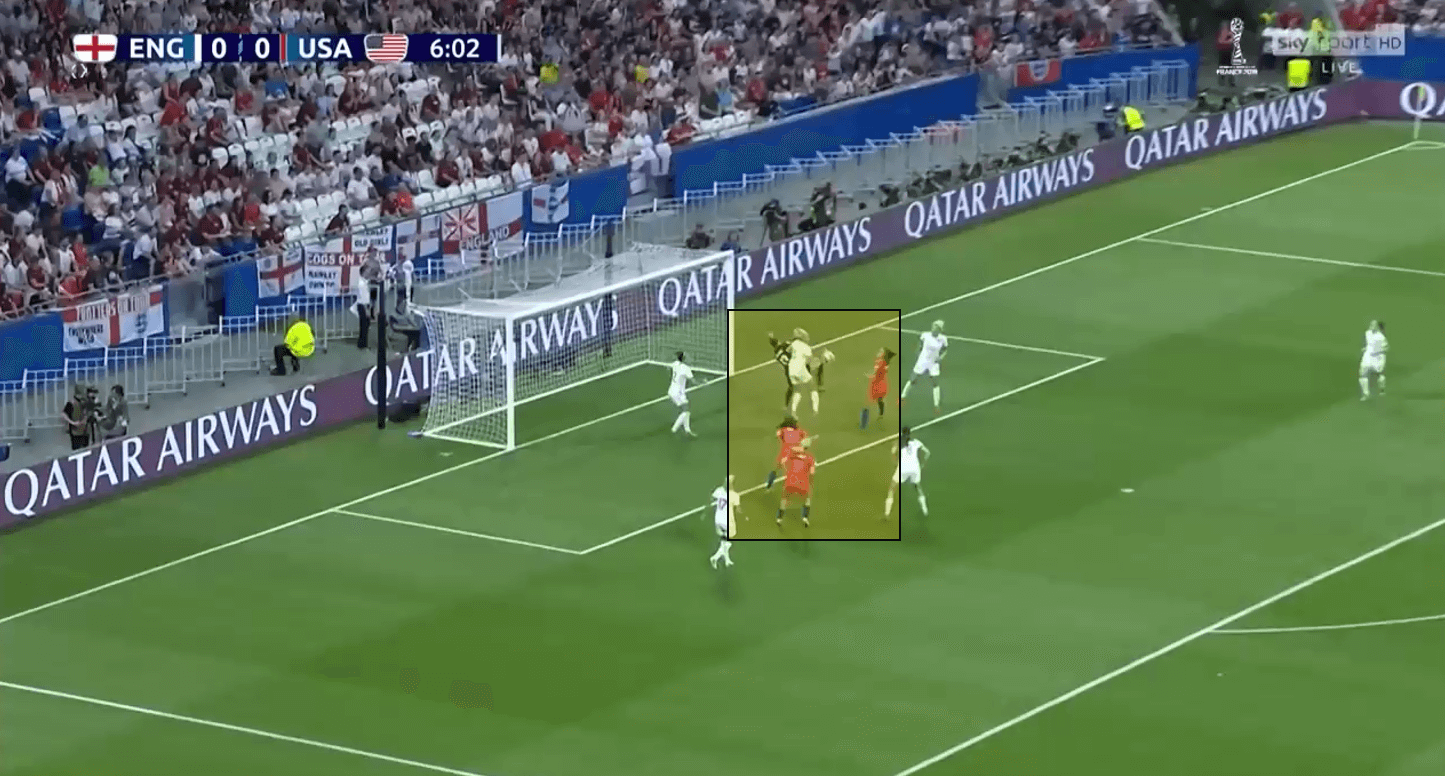 In this instance, the ball falls to the England defender. The USA team immediately goes to swarm the ball. In the early minutes, the Americans press aggressively pushing for the early advantage. 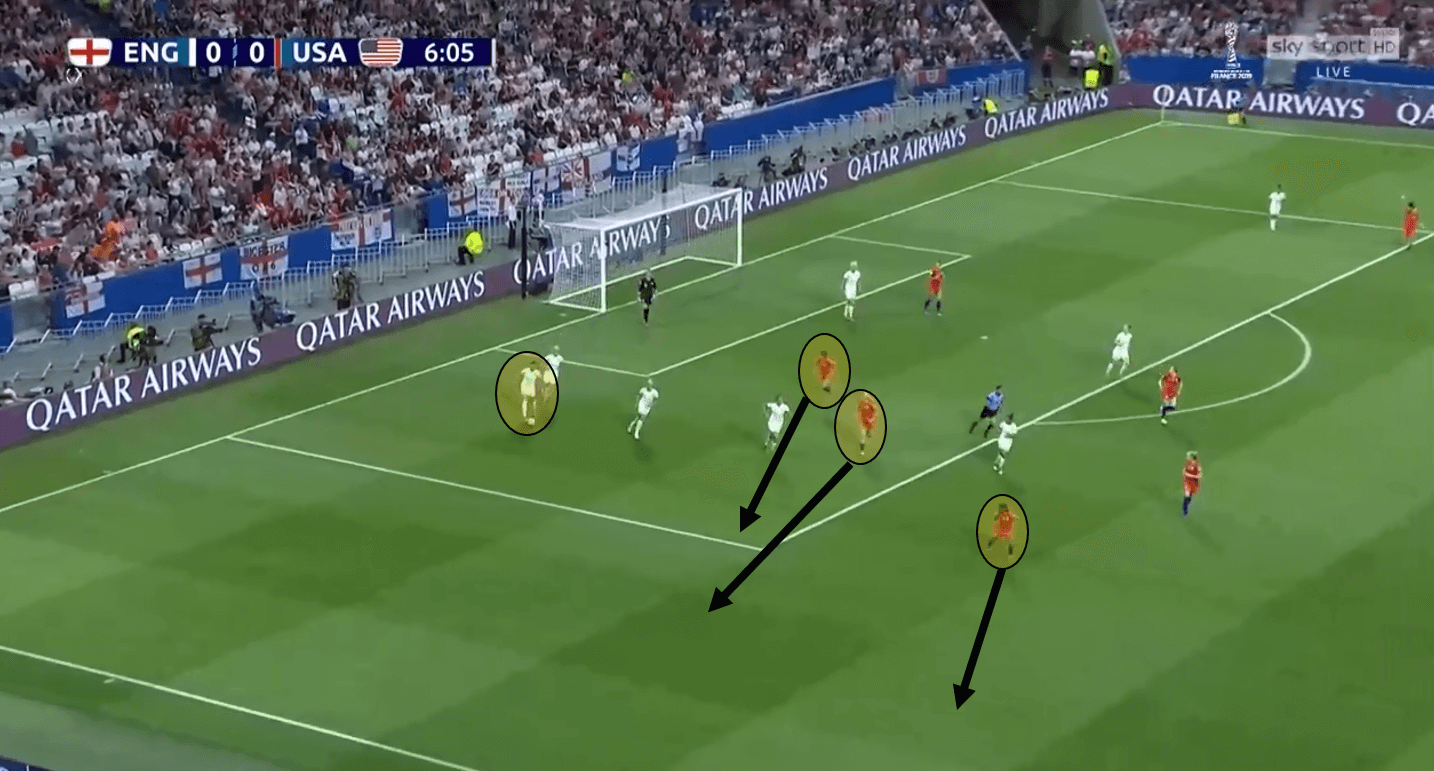 The result of this swarming effort is England is forced into another turnover. 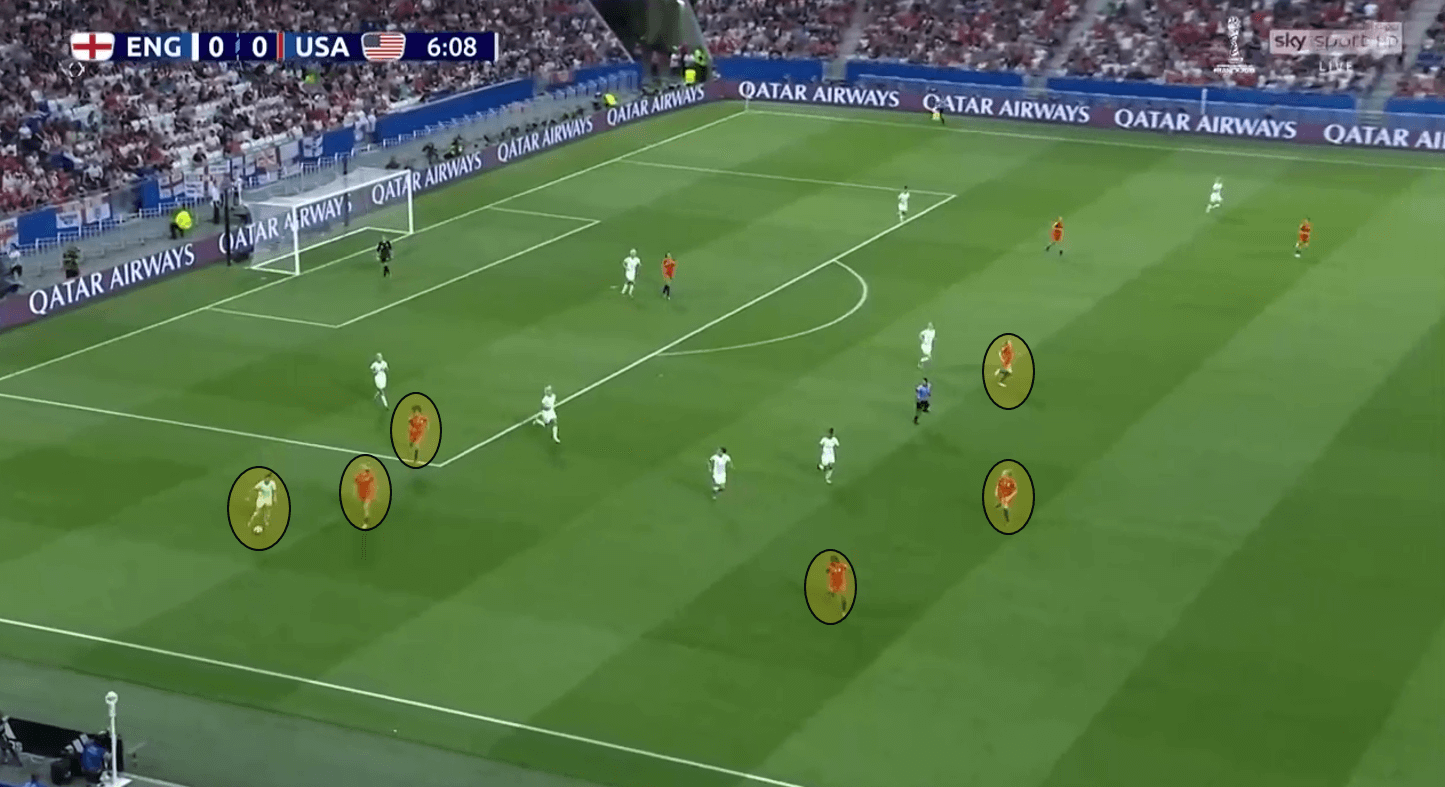 Coach Ellis has a team that looks to overwhelm the opposition early in the match. This strategy has worked to absolute perfection so far in the tournament. The sequence above shows the USA winning the ball and within nine seconds they had seven players in the attacking third of the pitch. When they lost the ball, they had pressure on the ball and numbers behind the ball in less than four seconds. High energy and high intensity at the start of every match.

The challenge for the Netherlands squad is to avoid being overwhelmed early. The USA team dominates opponents in the first 15 minutes. The domination is physical, positional, and mental. For the Netherlands to win, the first 15 minutes is crucial. How long can the USA team continue their intensity and focus on overwhelming the opponent? The longest they have had this challenge was for 12 minutes against Thailand. Once the Americans take the lead then they are playing downhill the rest of the match.

The dominant Americans have 23 goals and have given up only three goals. The Netherlands has scored 11 and given up three goals. The stats show a mismatch, but the past three USA matches have all been 2-1 wins with nervous endings.

The Netherlands has been consistent throughout the tournament on creating counter-attacking opportunities. They average four per match which is a high number considering they have had a majority of possession in all but one of their six matches.

As we have seen above, the USA aggressively commit high numbers into the attack. This has left them vulnerable to the counter-attack. Here are some counter-attacking pictures that England got against the USA.

Ball on the England midfielder’s foot with two vs two on the backline. 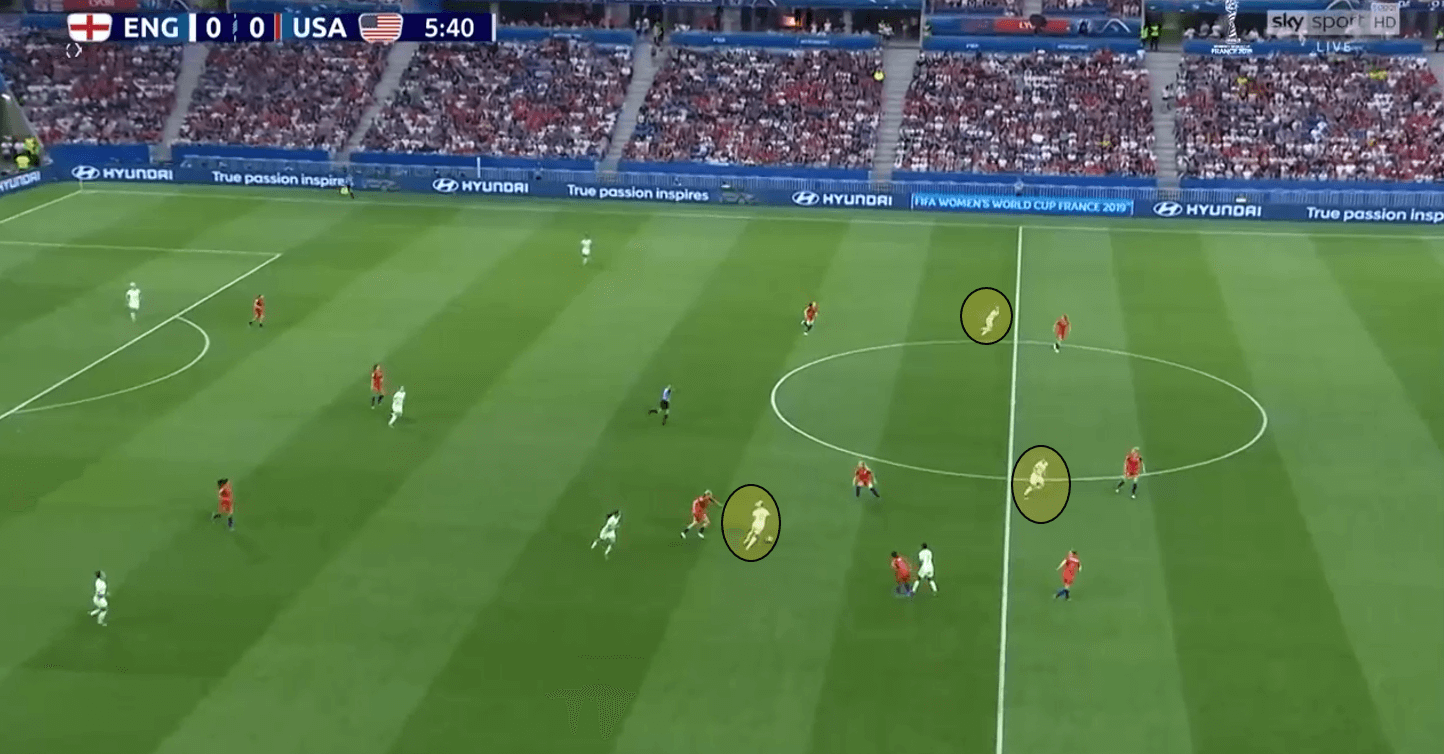 A second counter-attacking picture, England midfielder facing goal with a four vs four counter for England. 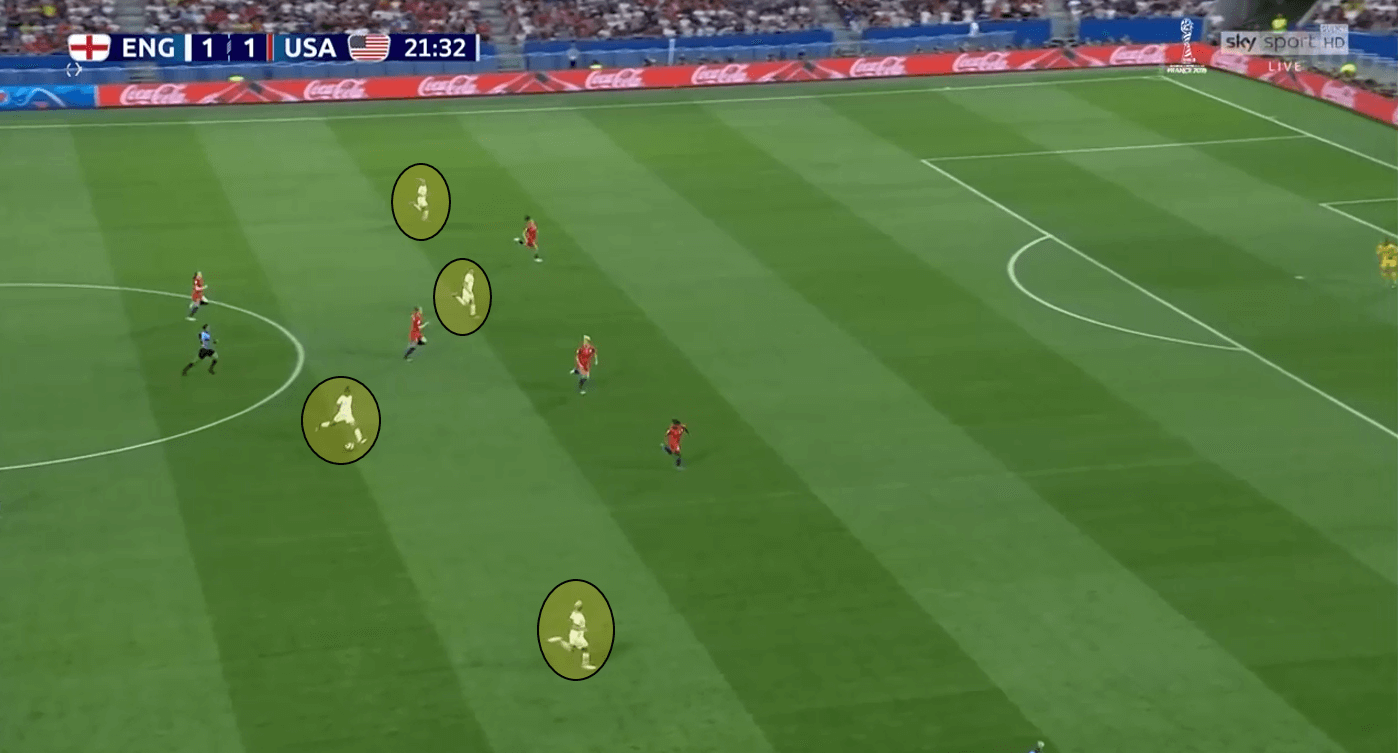 A third England counter with six attackers versus six defenders. Note that all the USA defenders are facing their own goal. The USA can be gotten at on the counter. 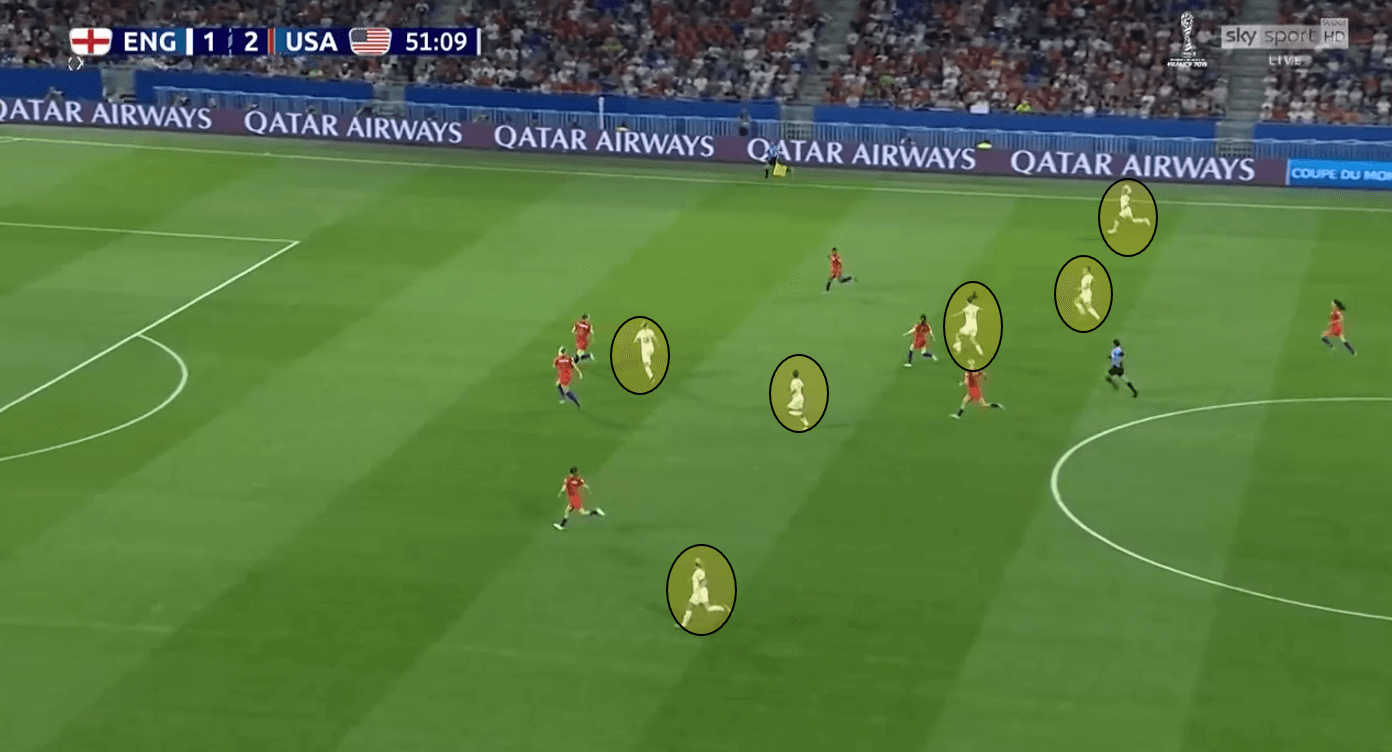 The Netherlands have the attacking squad to get great counter attacks. Here are three pictures that the Netherlands got versus Sweden in the semi-finals. 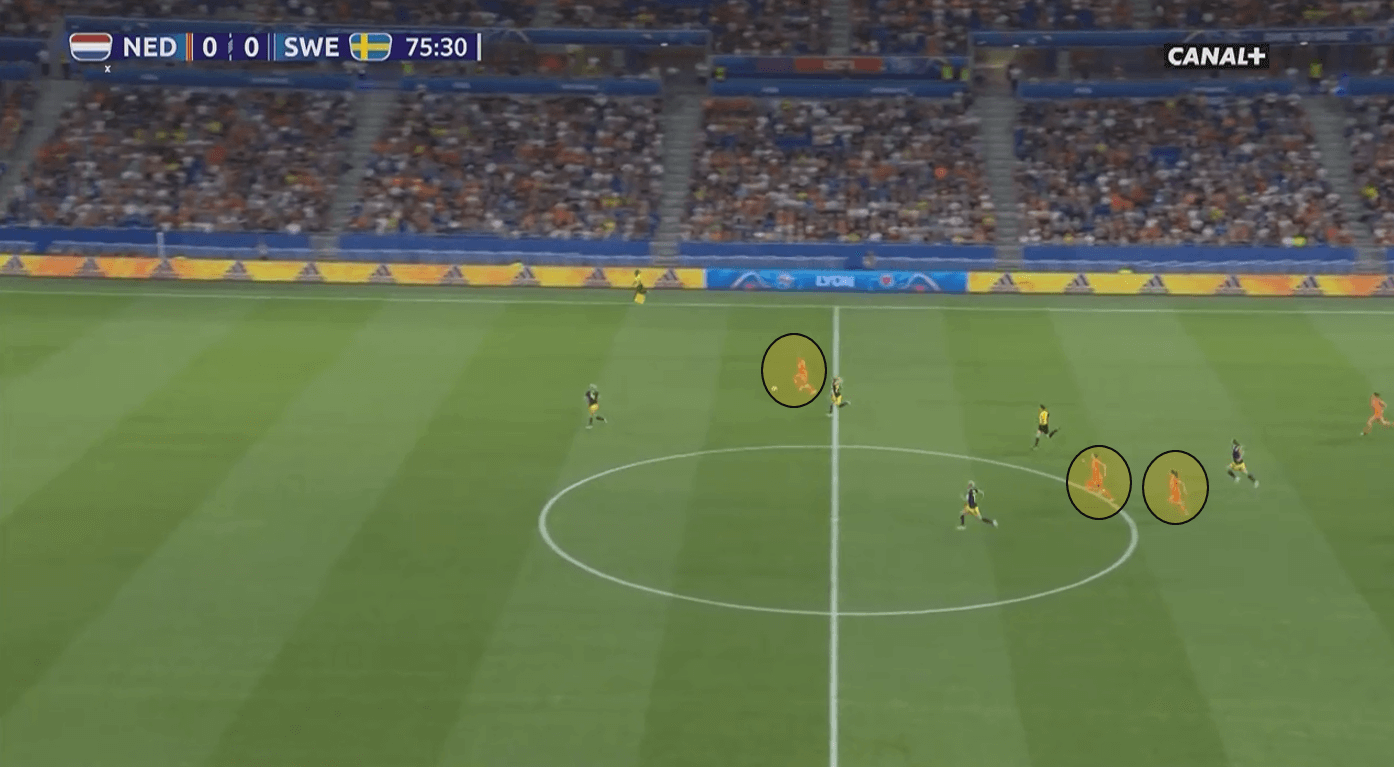 The first is the ball played out to the speedy van de Sanden. She leads the counter into a three versus three. Her pace and dribbling on the break is a possible reason she will get the start.

The next image is Vivianne Miedema on the ball with three teammates as willing runners. Miedema leads the Netherlands with three goals this tournament and has an astounding rate of 61 goals in 81 international caps. 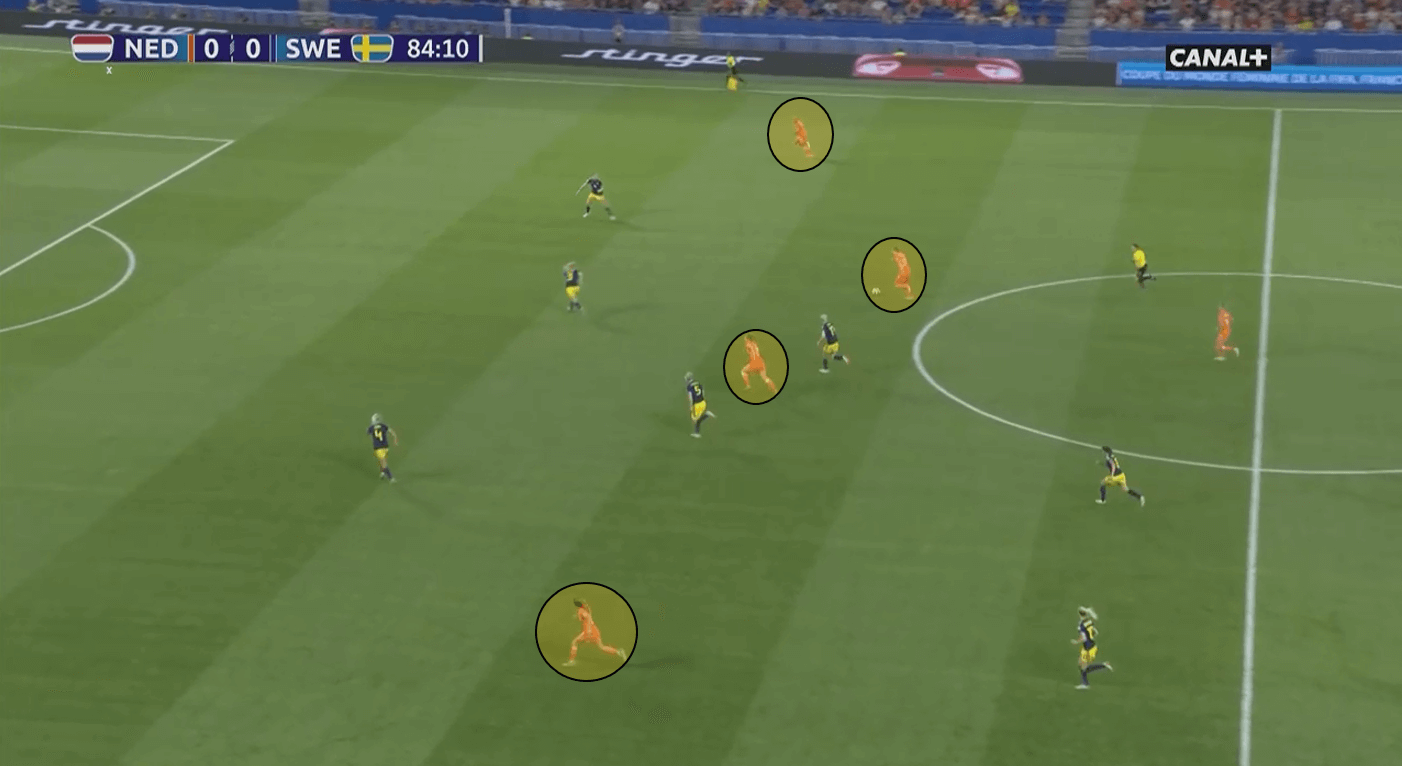 The final picture is again Miedema on the ball with the speedy van de Sanden making a run in behind. A great counter-attacking opportunity. 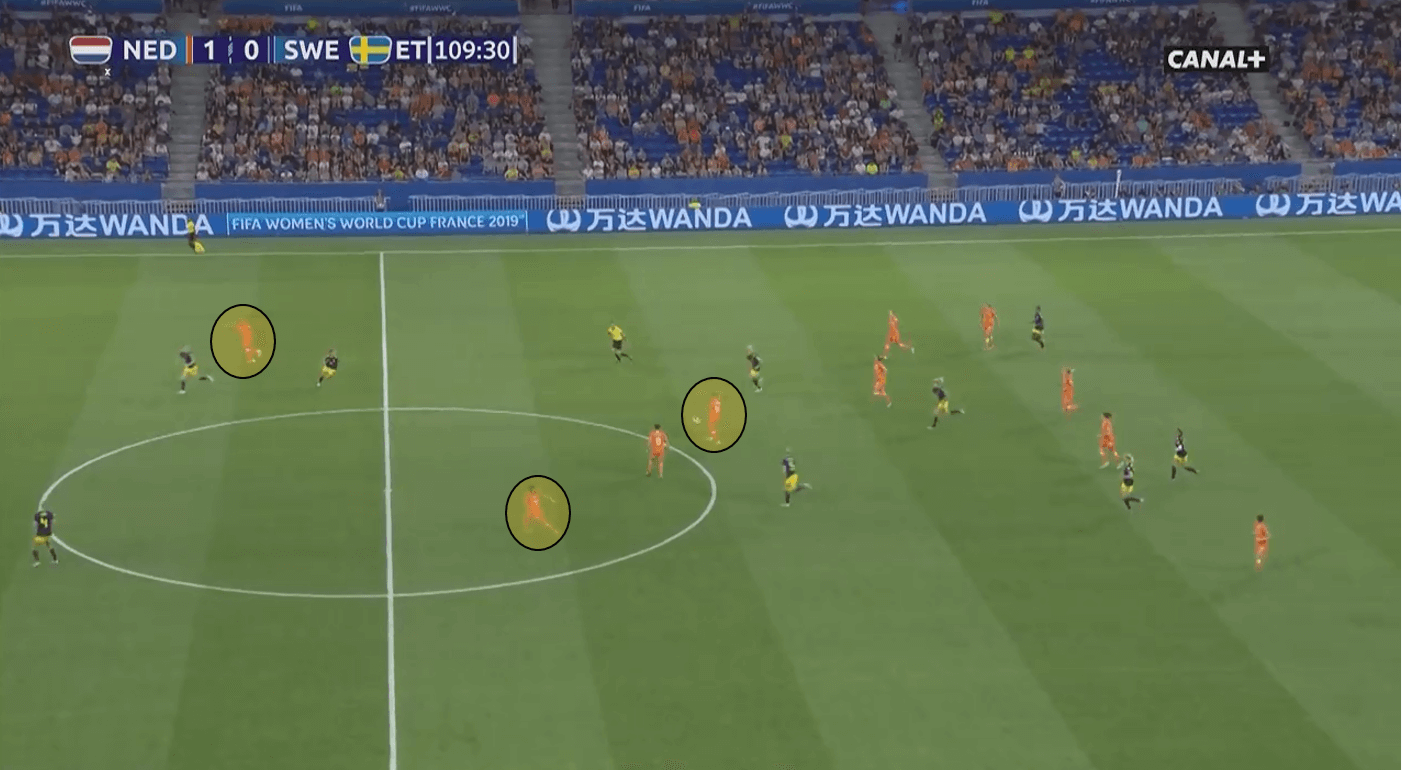 The Netherlands face a large task, but the USA team can be caught on the break. As shown in the analysis above, the USA will give up counter opportunities and the Netherlands can create counter attacks. The Netherlands will have at least four counter-attacking chances that will ultimately decide their fate.

This fantastic tournament all comes down to two terrific coaches who each need to make two crucial lineup decisions. Wiegman must decide on Martens health and which forward to start between van de Sanden and Beerensteyn. Coach Ellis must decide on the health of Rapinoe and Lavelle. Every other lineup decision looks easily settled.

The Netherlands will have a chance if they can keep the USA from scoring early. No team has been able to withstand the early pressure that the favourites exert on their opponents. A formula for the upset is to keep the USA off the scoreboard in the first 15-20 minutes and capitalise on the counter-attacking chances that the USA style of play will provide.