Before the final game, FIFA Women’s World Cup offered a last chance to both losing sides from the semi-finals. The bronze battle between England, eliminated by the USA, and Sweden, defeated by the Netherlands. Sweden displayed a strong performance and they were capable of frustrating England’s possession play. Also, Sweden were able to grab the lead and dictate the game and add one more goal, while England were only able to reduce the gap with Sweden winning third place in the end.

This tactical analysis will investigate Sweden’s tactics that gave them the bronze medal.

Tactical analysis of England vs Sweden

Although all three goals occurred due to defensive errors, this analysis rather focuses on what caused the major issues in plays, especially on the English side. Seeking the answers to the following questions.

Phil Neville deployed the well-known system which fluctuated between 4-2-3-1 and 4-1-4-1/4-4-2 formations, depending on the situation. As during the attacks, Jill Scott moves. Meanwhile, in the pressing phase, Scott leaves Francesca Kirby upfront in the #10 space and drops a bit to form a double pivot thus Lionesses formed the 4-2-3-1 shape. In defence, Bethany Mead and Nikita Parris dropped and the structure morphed into a 4-4-2 shape.

Furthermore, there were some changes in team selection. The obvious one was Abbie McManus replacing Millie Bright due to suspension. Moreover, Alex Greenwood played instead of Demi Stokes in the left back position and Jade Moore took Kiera Walsh’s position as a lone pivot.

Gerhardsson set his team up in the usual 4-2-3-1 formation. However, Caroline Seger paired up with Nathalie Björn instead of the regular starter, Elin Rubensson. In addition to this, Fridolina Rolfö played instead of Lina Hurtig on the left wing. But the biggest change was in the mentality, how they acted out of possession.

England struggled on the ball

The biggest question was probably how Sweden would stop England right side where Lucy Bronze and Nikita Parris are threatening the defences. Sweden chose to form a high block which destroys the opponent’s capability to advance through the thirds to the Swedish goal. Therefore, Gerhardsson ordered his team to stay high up the pitch and aggressively attacks the opponent’s build-up.

In the most cases, England made the attempt to build out from the goalkeeper in goal kick situations with ground passes, however, as Sweden formed a 4-4-2, the first line of press could match up with the two centre-backs and press them aggressively. This, of course, caused hasty decisions or wrong passes.

In Sweden’s formation, the wingers positioned in the half-spaces to maintain a narrow shape  – not allowing too many open passing lanes – but still having instant access to the full-backs. Therefore, the second line shifted quickly to the ball side when it was necessary.

Here, Stephanie Houghton received the pass from the goalkeeper but immediately felt under pressure since the nearby opponent forward rushed on her. This made Houghton pass quickly which was not successful. Meanwhile, the Swedish second-line shifted there quickly and Seger collected the free ball.

Nevertheless, the biggest issue was the basic setup and occupation of England. As the image above showed us, Houghton was in a really bad position when she received the pass. In these situations, the centre-backs dropped to offer passing options to the goalkeeper while the midfielders and the full-backs stayed in position thus they were too far, right at the beginning. The distance was not just vertically too big but in horizontally too since there was no available pass route between the two English centre-backs.

In the fourth minute, Kosovare Asllani forced the ball back to the goalkeeper as she pressed Mcmanus diagonally. Then the Swedish striker, Stina Blackstenius pressed the goalkeeper who managed to dribble past the onrushing opponent and pass to Houghton. However, Blackstenius quickly sprinted towards Houghton to force her into making another wrong pass.

On one hand, it has a positive effect when the central defenders occupy wide since the opposition has to cover bigger space. However, it also has negative. Occupying wide can be counter-productive as the ground pass between the centre-backs became impossible.

All that said, there are ways to solve this issue. Firstly, with a bigger contribution from the goalkeeper is a really good way to create pass connection between the centre-backs.

Or another way to achieve this is to ask the deepest midfielder to drop between the two defenders. It is a common pattern too. However, Phil Neville’s side did not do that thus they struggled.

In the 17th minute, England showed an attempt for the latter option. As the image shows above, Jill Scott dropped centrally which would create a decision-making crisis for Blackstenius, if Houghton would drive forward on the ball. In this case, the Swedish striker had to choose between marking Scott or pressing the ball carrier. Unfortunately, England did not recognise this opportunity and Houghton simply passed to Bronze who was then immediately pressed by Rolfö.

Sweden passed through the English press

As I mentioned, England formed a 4-2-3-1 shape during their pressing phase. They also tried to stop the opponent’s progression early on, however, they were much less successful than Sweden.

In the first line, Ellen White aimed to shift to the ball side to add central protection by blocking the passing lanes towards the centre. Or tried to press the centre-back from sideways.

Meanwhile, Kirby had the duty of positioning between the Swedish double pivot and shift to the ball side to mark the nearby midfielder. However, due to the high occupation of the Swedish wingers, the full-backs had to stay deep to cover them. Thus the wingers, Bethany Mead and Nikita Parris, in tough circumstances had to occupy narrow to reduce the space in between the line or block the passing lanes and press the full-backs. 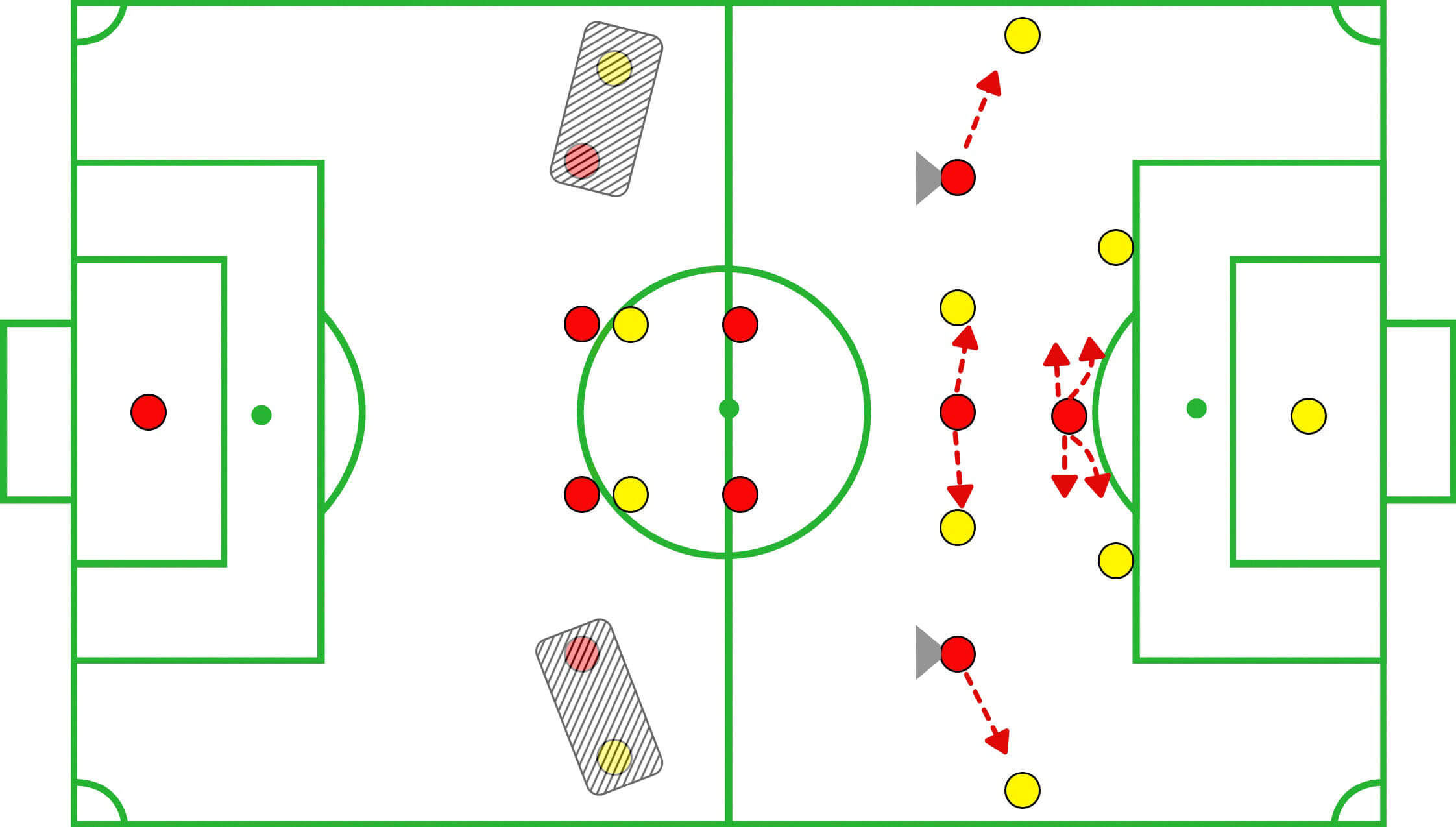 Sweden pressed and had the average occupation. Therefore, Sweden always found an open passing route towards the full-backs. Then they had time to progress up the pitch or pass forward to teammates high up.

Also, England had to shift to the side to side in order to close down the whole width of the pitch. However, in the fourth minute, Sweden showed a way to exploit this manner. When Nilla Fischer passed to Linda Sembrant and then the latter passed back to Fischer, it was enough to force the opponent into a shifting movement. This caused a small gap between Kirby and Björn, thus Björn was able to receive the ball and pass to Sofia Jakobsson.

It was a deserved win for the Swedish side. Coach Gerhardsson prepared his team quite well for this encounter and addressed the opponent’s strengths well. Also, they were almost merciless in attacks and finishing which gave them two quick goals. All in all, it was a good execution of good tactics.

On the other hand, England made serious defensive errors which they are not supposed to do at this stage of a tournament, although it was just the bronze game. Phil Neville and his team had a good World Cup overall, but they need to improve for future battles.