The Netherlands and Sweden meet in the semi-finals of the Women’s World Cup as two differing histories collide. The Oranje reached the round of 16 last season in their first ever tournament campaign. The Blågult meanwhile have qualified for every edition of the competition, reaching the semi-finals three times and the Final once, losing to Germany in 2003.

Now, both sides have predominantly exceeded expectations. This tactical analysis preview will describe how the Netherlands and Sweden are two teams deserving of their semi-final spot, and how their meeting might play out.

Both teams played the same starting lineups in each of their last two matches. The Netherlands, helmed by manager Sarina Wiegman, set up in their 4-3-3 attacking shape with pressing and on-the-ball play focused in the wide areas and half-spaces. The full-backs Desiree Van Lunteren and Merel van Dongen push forward in both situations, often leaving centre-backs Stefanie Van der Gragt and Dominique Bloodworth to defend across the back line areas. The midfield trio of Jackie Groenen, Sherida Spitse, and Danielle van de Donk often highlight the press and wide area attacks. Vivianne Miedema, the top scorer in Netherlands national team history, receives crosses while occupying zone 14 and central spaces inside the opposing box. 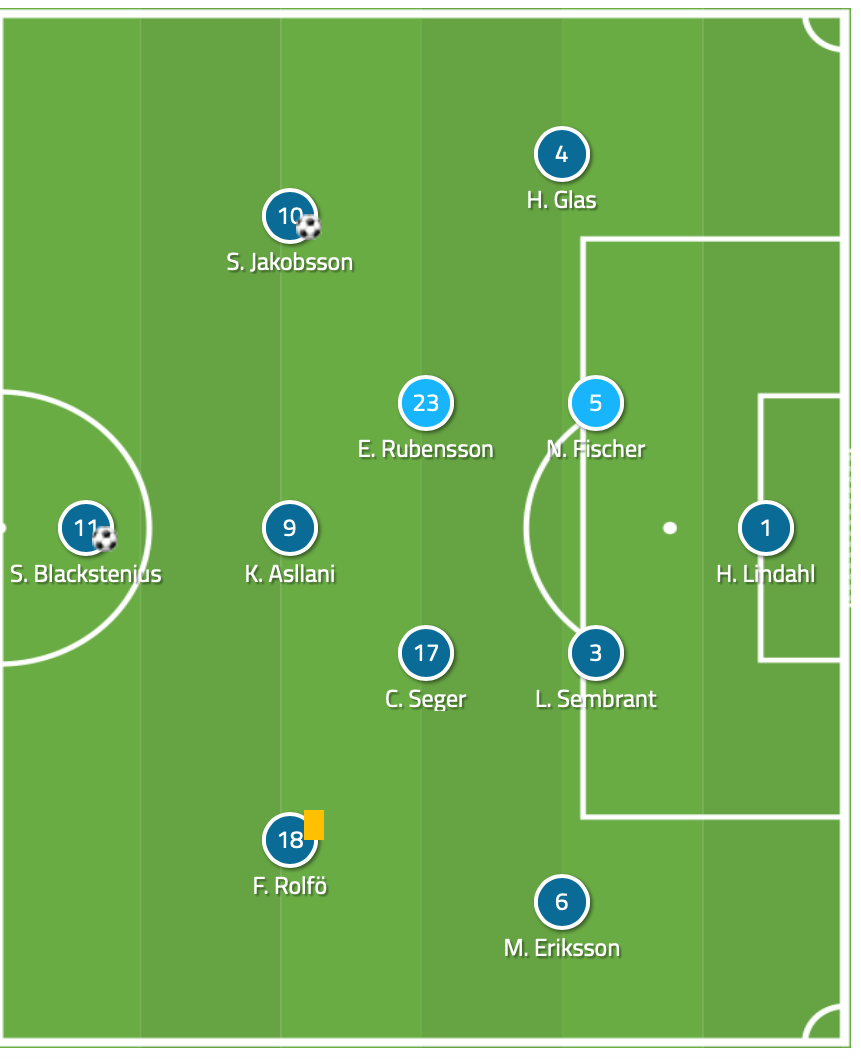 For the knockout rounds, Sweden manager Peter Gerhardsson has gone against the reputation of being tactically flexible and instead opted for a more low-block setup. Keeper Hedvig Lindahl has made vital saves when needed, but the stout back line comprised of Hanna Glas, Nilla Fischer, Linda Sembrant, and Magdalena Eriksson has been one of the best of the tournament. On counter-attacks, the ball is quickly moved forward through the lines, from Caroline Seger and Elin Rubensson to the front four. The movement and versatility of Kosovare Asllani has allowed the other three ample space to exploit and finish. Striker Stina Blackstenius has scored the match-winning goal in both of the last two matches.

The defending European champions have been primarily emphasizing possession tactics throughout the tournament, pushing high in formation and counter-pressing frequently. This aggressive style of play is displayed fully by the attacking players.

The way in which the Netherlands attack is rather vertical. The wide attackers draw out defenders, opening space in the half-spaces. Specifically, the free eights Groenen and van de Donk specialise in these movements. In the figure above, Groenen, after taking over possession by pressing the opponent, stays in the half-space to keep the Italian defenders wide. She then hits a through ball that meets with Miedema’s run.

After getting down the pitch, the wide players will cross the ball in to Miedema. The striker has excelled throughout her career at getting into position in dangerous areas on set pieces and lofted passes.

Defensively, the Netherlands utilise a mid-press focused mainly in the wide areas. The central midfielders block the middle of the pitch forcing the ball wide. This was mostly effective against Italy. As Le Azzurre attempted to build out from the back, the Netherlands press was strong and methodical.

This forceful defending however has it’s weaknesses. In aggressive positions, there will often be space available for the opposition behind the back line. This was evident in moments against Italy.

The Netherlands back line has not been the most organised in the knockout rounds.

In the situation above, Italy managed to break apart the Netherlands back four. As the left centre-back moves forward to press the ball, the attacker on the right side cuts into the space the defender previously occupied. The pass is made to the Italian attacker on the left, and a 2v1 situation is created. This is a sequence achievable by staggering an opposing back line.

Against Japan, the Netherlands defence was also manipulated. After getting into space between the lines with the ball, the Japanese attacker was pressed by a defender. This opened up space behind said defender for the attacker from the left to shift into. This sequence led to Japan evening the score.

Sweden meanwhile have a considerably different tactical system in place. As stated, the team has been known under Gerhardsson to be tactically adaptable to their opponents. However, in the past two matches Sweden have been deployed in a low-block setup. These disciplined, structured tactics have been effective, and Sweden’s defence now goes into the semi-finals match full of confidence.

Sweden’s zonal defending has been extremely efficient, thanks largely to the constant communication between the back four. As you can see in the figure above, they were too disciplined for any opposition’s switch of play attempts to succeed.

The lone goal conceded by Sweden in the knockout stages came from Germany. The two-time Women’s World Cup champions were able to break open small areas of space in Sweden’s back line, though it occurred very rarely.

In the build-up of the goal, the possessor of the ball dribbled centrally towards Sembrant. The centre-back stepped forward to pressure the attacker, abandoning the other defender in her space. This forced Fischer to mark the open attacker, which in turn left a gap next to Fischer.

Another German attacker makes a run into the open space. There isn’t enough time for Glas to shift over and cover that space, and the attacker receives the ball with a quality chance on goal.

Despite this, Sweden’s defending has been largely successful. Germany attempted this manoeuvre multiple times and were unable to succeed with it, partially due to a lack of width but also due to the discipline of Sweden’s defenders. If the Netherlands attack is looking for a way to penetrate the low block, they will need to take any small spaces they can open.

In the group stage, Sweden at times had trouble finishing their chances. They have been far more efficient in the knockout rounds, as the counter-attacking off the low block better suits the attackers’ styles of play.

In both matches, Sweden were able to get around high back lines using two methods.

On the lone goal against Canada, Sweden played very direct, forward passes to the forward attackers. The Canadian’s high back line left swathes of space to exploit. With Sofia Jakobsson keeping her marker wide right, this prevented any numerical superiority for the opposition. Asllani carried the ball forward, and Blackstenius knocked in the goal.

Sweden also attempted a number of long balls forward after retaking possession in their own third. They were able to get past Germany’s back line a number of times using this method. Familiarly, as stated this was how Italy pushed the ball forward against the Netherlands in their semi-finals match.

The Netherlands will look to reach an unprecedented level of success for their country and fulfill the dark horse tag given to them by many before the tournament began. Sweden plan on reaching the final for the second time ever, in which they would face their biggest non-geographic rival: the United States. Upon analysis, the overall contrasting tactical setups of these two teams during the World Cup leaves for an intriguing semi-final, but if it ultimately becomes a more conservative tactical matchup, the defensive superiority of Sweden could be the deciding factor.