AFCON 2021: a statistical preview of the quarter-finals – data analysis

After another exciting week of AFCON 2021 in which we have seen some excellent games, various upsets and images that will last forever, all is ready for the quarter-finals that start today.

The round of 16 had three penalty shoot-outs, the elimination of Nigeria, Mali and Côte d’Ivoire and the game between Cameroon and Comoros in which the latter had to field an outfield player, Ajaccio’s left-back Chaker Alhadhur, as a goalkeeper. Alhadhur’s performance in goal was memorable despite his team losing 2-1 and it’s already part of the history of African football. 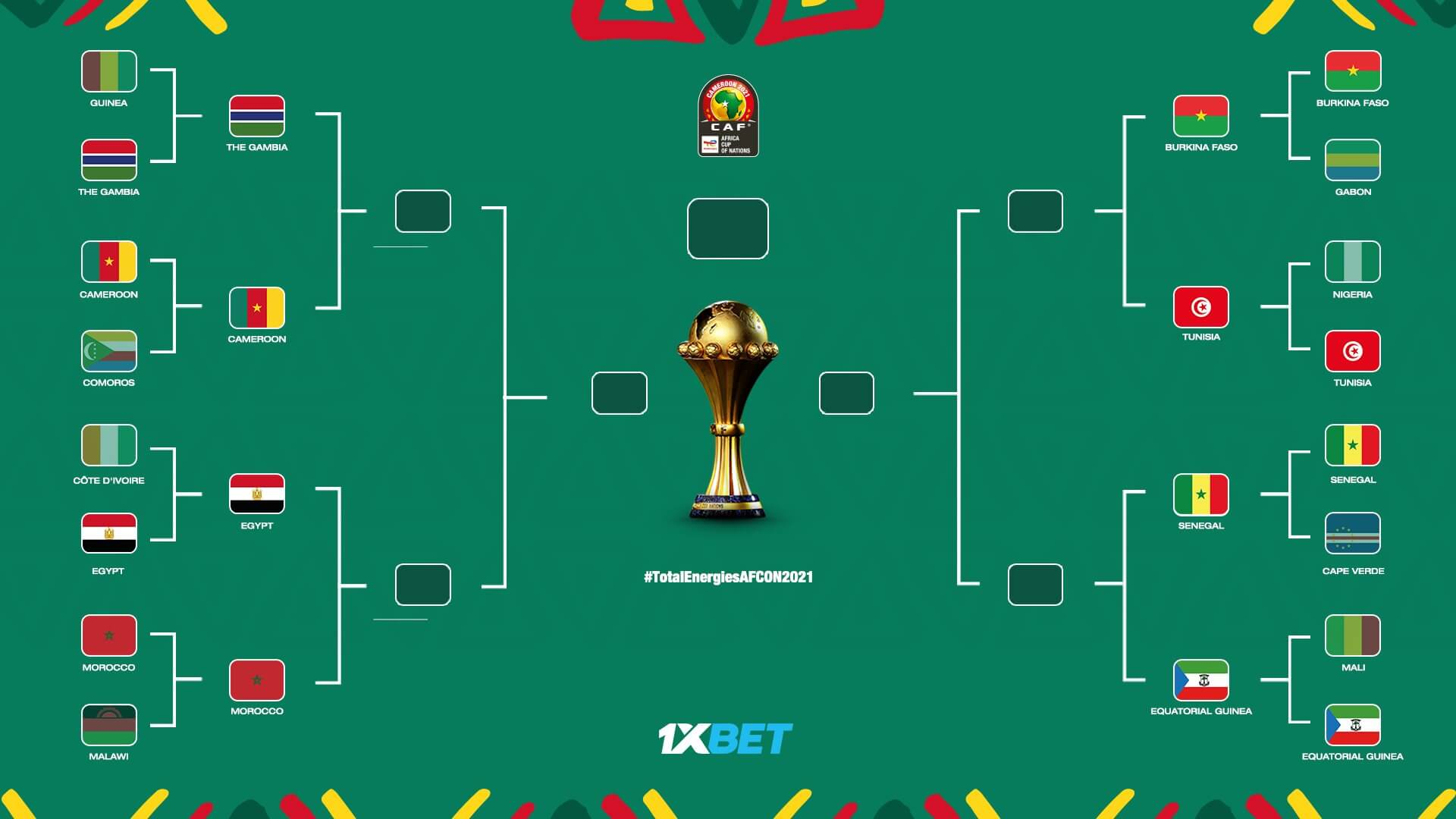 This is how the knock-out stage of the tournament looks at the moment and in this data analysis piece, we’ll preview the four quarter-final games using the data of each nation so far in the tournament. 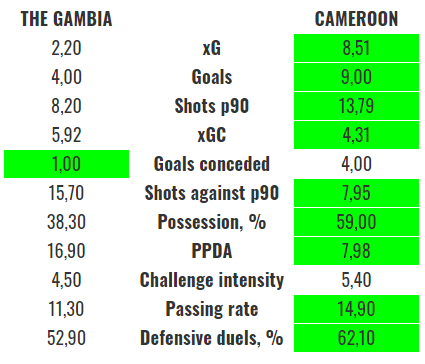 The first quarter-final will be the one between The Gambia, who knocked out Guinea in the round of 16 (1-0), and the hosts Cameroon, who won just 2-1 against a goalkeeper-less Comoros in the previous round.

After the many surprises that have occurred in the AFCON 2021 so far – the elimination of Algeria, Nigeria, Ghana or Mali – Cameroon remain as one of the favourites to win the tournament, both for the quality of their performances so far and for playing at home and with more people allowed in the stadium than the other teams.

The Gambia is the nation with the lowest FIFA Ranking in this AFCON and it’s also the first one they play so the can be considered the greatest surprise so far, at least from a historical point of view. But looking at the squad, they have good players playing at the highest level, including the Serie A duo of Musa Barrow (Genoa) and Omar Colley (Sampdoria).

Looking at both teams’ performances so far in the AFCON 2021, Cameroon is the clear favourite to win this tie. We should expect a game in which Cameroon dominates the game as they’re one of the most possession-dominant teams with an average possession of 59% while The Gambia are the opposite with just 38.3%. Cameroon also play quicker football with a passing rate (passes per minute of possession) of 14.9, which combined with The Gambia’s lack of pressing (16.9 rival passes per defensive action or PPDA) points to a very one-sided game, at least in terms of possession.

Cameroon are also managing to translate that possession into good chances, having scored 9 goals from 8.51 xG so far. On the opposite side, The Gambia has been extremely effective and efficient with their goals as they have reached the quarter-finals with only 4 goals in 4 games from just 2.2 xG.

The Gambia’s defensive performance has been poor in defence, conceding 5.92 xG in total and 15.7 shots per 90 but they’ve been lucky to concede just 1 goal. In Cameroon, we find the two top scorers of the AFCON 2021 so far, Vincent Aboubakar and Karl Toko Ekambi, so The Gambia’s luck could be over soon. Cameroon haven’t been the most solid team in defence anyway, conceding 4 goals from 4.31 xG, so there’s a possibility there for the underdogs.

Cameroon are expected to press much more than The Gambia as shown by their 7.98 PPDA (16.9 for The Gambia) and they’ve proven to be much better in defensive duels, winning 62.1% of them while the Gambians are one of the worst teams in these duels and win just 52.9% of them.

Looking at the statistics so far in the tournament, it should be an easy win for Cameroon. But if we’ve learnt something in the AFCON 2021 is that surprises can happen anytime so the hosts should be focused and try to kill the game soon if they don’t want The Gambia to grow in the game and believe their dream can continue. 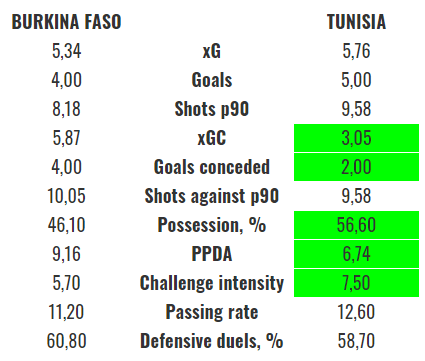 After the Cameroon v The Gambia game, Burkina Faso will face Tunisia in the second quarter-final match. Burkina Faso knocked out Gabon in the penalty shoot-out (1-1, 7-6), while Tunisia provoked yet another shock by beating the favourites Nigeria 1-0. In the FIFA Ranking, Tunisia rank in the 30th position while Burkina Faso are 60th.

In defence, there are more differences. Burkina Faso have conceded the double of goals of Tunisia (4) and they’re still overperforming here as they have allowed a total of 5.87 xG (3.05 for Tunisia). Burkina Faso still look good in defensive duels, winning 60.8% of them but maybe they let rivals play too comfortably as shown by their challenge intensity (duels, tackles and interceptions per minute of opponent possession) of just 5.7 compared to Tunisia’s 7.5.

Tunisia is the slight favourite in this game but Burkina Faso have proven their a good counterattacking team and have some top players who can win the game at any point. Before the tournament, both teams would have considered reaching the semi-finals of the AFCON 2021 a good run but once one of them is there, they’ll dream of winning it. 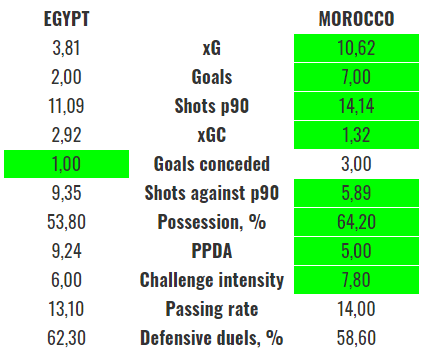 The third semi-final and first on Sunday will be the closest one, at least on paper. Egypt will face Morocco after they eliminated Côte d’Ivoire and Malawi respectively. The North African derby will feature two of the favourites to win the AFCON 2021, even if their performances in the tournament so far have been very different.

Morocco are performing at an excellent level so far their underlying numbers are the best among the remaining teams. They have created 10.62 xG so far allowed just 1.32 xG, which is outstanding. Even if they’re underperforming both statistics (they have scored 7 goals and conceded 3), they still are a dominant side.

On the other side, Egypt have been quite disappointing so far as they’ve only generated 3.81 xG and scored 2 goals in the tournament so far. At least they’ve been solid in defence, allowing just 2.92 xG and conceding just once. They still concede a lot of shots (9.35 per 90) but from speculative positions.

Both teams have had more possession than their rivals so far in the tournament but Morocco have been completely dominant with an average possession of 64.2%, while Egypt seem to have faced rivals who let them dominate even if it wasn’t their plan as shown by their 53.8% average possession.

This intention to dominate can also be seen in their pressing statistics. Morocco have a much lower PPDA of just 5, while Egypt don’t press as much (9.24 PPDA). The challenge intensity reflects the same, with Morocco’s 7.8 being higher than Egypt’s 6. Both teams play quite fluid football when on the ball and have a high and very similar passing rate.

In terms of individual outstanding players, Egypt have the EPL trio of Salah, Elneny and Trezeguet plus a solid squad composed mostly of local players, while Morocco have several top-class players like PSG’s Achraf Hakimi (2 goals so far), Sofyan Amrabat (linked to Tottenham) or Soufiane Boufal (2 goals and the most xA in the tournament).

This should be the highest-level encounter of the quarter-finals and any team that comes out on top will automatically become one of the favourites to win the tournament. The winner here will face the winner of Cameroon v Malawi in a vibrant semi-final. 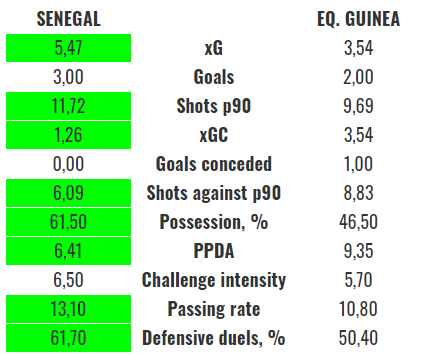 The last quarter-final game will be Senegal against Equatorial Guinea. While Senegal beat Cape Verde comfortably (2-0) in the round of 16, Equatorial Guinea had to sweat to knock Mali out on penalties (0-0, 6-5) and produce another big surprise. Senegal are the favourites here but no one expected Equatorial Guinea to get so far and they’ve proven to be a difficult team to play against.

In defence, Senegal are excellent as they haven’t conceded yet and they also have one of the lowest xG against (just 1.26). Equatorial Guinea aren’t doing bad either but Jesús Owono, their goalkeeper, has had more work as they have only conceded 1 goal from 3.54 xG against. Seeing how both teams have behaved in attack and defence, we can expect a low-scoring game.

In terms of playing style, Senegal will probably dominate possession as they’ve had one of the highest average possessions so far (61.5%) while Equatorial Guinea have felt quite comfortable letting rivals have the ball (45.5% average possession). Senegal also press more as shown by his 6.41 PPDA, the second-lowest among the teams still in the tournament. Equatorial Guinea should be careful with their individual duels as they have only won 50.4% of their defensive duels and they’ll face the best players so far.

Senegal have plenty of stars that make them one of the favourites since the start of the tournament. Chelsea’s Edouard Mendy in goal, Napoli’s Kalidou Koulibaly, PSG’s Idrissa Gana Gueye or Liverpool’s Sadio Mané, to mention one per line, are the best-known names of The Lions of Teranga. Equatorial Guinea don’t have any world-class star, with most of their team playing in the Spanish lower leagues. Their captain Carlos Akapo plays for Cädiz in La Liga but the best performing players so far are Alavés B’s goalkeeper Jesús Owono, Fuenlabrada’s (La Liga 2) midfielder Ibán Salvador and Real Murcia’s (Segunda RFEF, fourth tier) midfielder Pablo Ganet. If Equatorial Guinea manage to get a win here, it will be one of the major upsets in the history of AFCON.