The AFCON 2021 Group Stage is over and it’s time to reflect on what’s happened in the tournament so far.

There have been some major upsets, with defending champions Algeria and favourites Ghana finishing last in their groups. Algeria came into the tournament with a 34-match unbeaten streak but has only managed to get a point in three games.

On the opposite side, the two debutants (Comoros and The Gambia) have managed to qualify for the Round of 16 and dream of progressing further in the tournament. Another surprise has been Equatorial Guinea, who have finished second in their group in their first participation based on sports merit (they were the hosts in their previous two AFCONs). The Nzalang Nacional (representing the only Spanish-speaking country in Africa) have had an excellent tournament so far with a squad composed mostly of players from the Spanish lower leagues, a few of them with La Liga experience.

In this data analysis, we’ll look at some facts and data points that have caught our attention.

The first point of this data analysis will focus on how teams have performed compared to their expected goals (xG) and expected points (xP). We’ll have a look at some general tendencies and also at the outliers when comparing these statistics to the actual goals and points.

The first thing we note when looking at the xG in the AFCON 2021 Group Stage is that teams are underperforming them on average. The average xG in the three games played so far is 3.56 per team but the average goals scored is just 2.83. This means teams should have scored 25.8% more goals than they did. A mix of bad finishing and some incredible goalkeeping performances explains this data.

Now let’s take a look at the expected points. As it’s normal over a short period like three games, xP don’t correlate very well to actual points in the AFCON so far. The graph below shows every team’s xP and points. The dotted line separates those teams that got more points than expected (right) and those who got less (left) and the colour shows the difference between points and expected points, with green being positive and red negative. 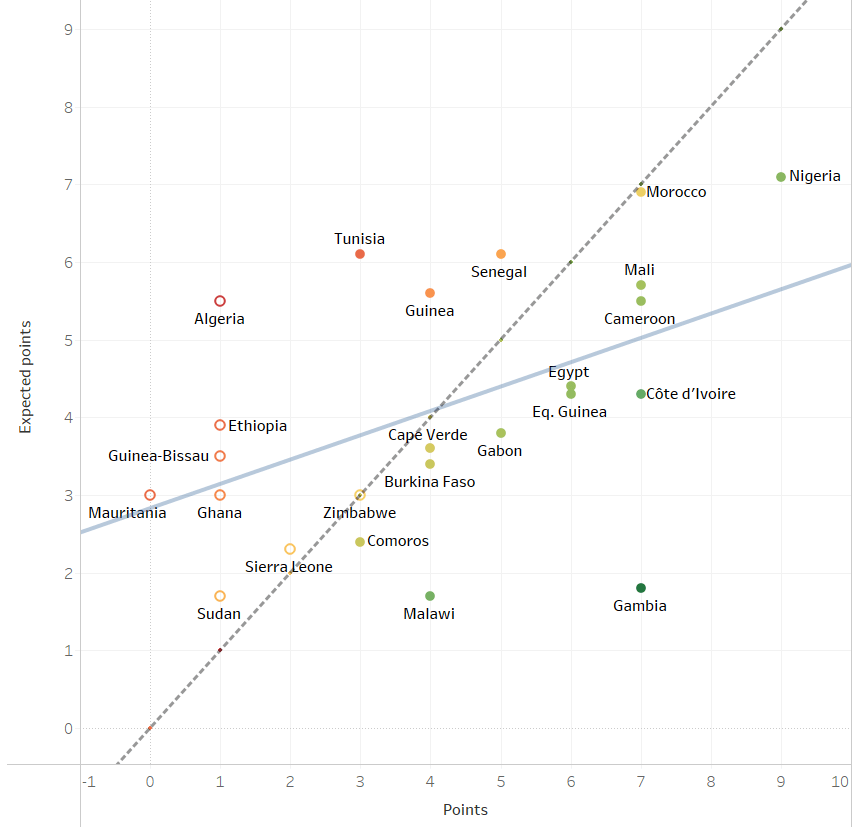 The blue line shows the correlation between xP and points and its slope is much lower than the dotted line, showing xP didn’t correlate very well with points.

The eight teams that deserved to be out of the AFCON according to xP were Malawi, Sudan, The Gambia, Sierra Leone, Comoros, Ghana, Mauritania and Zimbabwe. Three of them (Malawi, The Gambia and Comoros) qualified for the next round while Algeria, Ethiopia and Guinea-Bissau were eliminated despite not being among the worst eight.

Algeria could be considered the unluckiest (or least clinical) team in the tournament. The defending champions were the biggest underperformers, getting just 1 point from 5.5 xP and finishing last in a Group E that also had Sierra Leone, Equatorial Guinea and Côte d’Ivoire in it. We’ll look at more key statistics about their performance later on in this data analysis.

On the opposite side, Malawi and The Gambia performed a miracle to go through the Group Stage. They had the worst and second-worst xP but both qualified quite comfortably. The Gambia finished second in their group ahead of Tunisia and Mauritania and behind Mali, while Malawi were the second-best third with 4 points and a goal difference of 0. We’ll delve deeper into the data behind their miracles in the next section of the analysis.

Malawi and The Gambia against all odds

As we have just mentioned, The Gambia were the team that registered the best difference between their expected points (1.8) and the points they actually got (7), while Malawi had the third-best difference with 4 points from 1.7 xP. The second-best was Côte d’Ivoire, who qualified comfortably.

The data behind both nations performances was very poor too:

Getting to the Round of 16 is already a success for both nations but they need to improve a lot to compete in the next round. We could say they’ve been very lucky to go through as their underlying numbers didn’t support their results.

Three goalkeepers have been extremely important in their respective teams’ performances, even if just two of them qualified for the next round:

Salim Ben Boina (Comoros). The French-born 30-year-old goalkeeper was the best goalkeeper of the Group Stage according to data. He was crucial to Comoros’ historic performance, preventing an absolutely crazy 2.02 goals per 90. He was the goalkeeper who faced the most shots per 90 (8.93) and consequently made the most saves per 90 (7.44). Most prevented goals (2.02 p90!!!!). He was also brave and left his line 3.72 times per 90, more than any other goalkeeper. Comoros were the worst team in defensive duels, winning just 50.3%, and forcing Ben Boina to intervene too often. He played just 116 minutes as he was on the bench for the first game and got injured early in the last one but the US Marseille Endoume still made an excellent impression.

Mohamed Kamara (Sierra Leone). The 22-year-old goalkeeper, who still plays in his country for East End Lions, had the most-commented performances in goal so far. He’s second in all the statistics Ben Boina topped, preventing 0.74 goals, receiving 6.34 shots and making 5.44 saves per 90. He’s also the player who has been on the pitch for the longest time in the AFCON Group Stage with 298 minutes. Given he has played every minute, he could be considered the best goalkeeper in the tournament so far and it will be a shame not to see him in the next stage.

Jesús Owono (Equatorial Guinea). Born in 2001, the Alavés goalkeeper (he made his La Liga debut earlier this month) prevented the third-most goals per 90 in the AFCON so far (0.69). Equatorial Guinea showed better defensive performances than Comoros and Sierra Leone, conceding just 2.31 shots per 90 in the two games Owono was in goal. However, all those shots were on target and Owono saved them all, including an 85th-minute penalty in the last game that would have cost Equatorial Guinea their qualification in favour of Sierra Leone.

As mentioned, Algeria were the biggest underperformers in the group stage as they got just one draw despite registering 5.5 xP (seventh-highest among the 24 participating teams).  The Fennec Foxes created enough to go through but didn’t manage to capitalize on it and won’t be able to defend their crown. These are some of the great underlying numbers they achieved in the Group Stage:

Despite all the good things they did during the three games, Algeria couldn’t translate it into goals (Man City’s Mahrez even missed a penalty), completing the worst title defence in the history of the AFCON.

Despite finishing last in Group A with just one point, Ethiopia played a very nice fluid football. With the youngest squad in the tournament (23.4 years old), all of them playing in Africa and 93% of them in the Ethiopian Premier League, they still managed to record 3.9 xP, close to the 4 points that would have meant their qualification for the next round.

The Walia ibex had moments of brilliant football across the three games. Their combination play made some of their players look great, playing quick passes to go forward and displaying a great connection between their players. They had the highest passing rate in the AFCON with 15.8 passes per minute of possession. Despite their low average possession (46.7%), they had the third-most passes per 90 (401.39), which also shows how quickly and fluidly they played. Their tendency to pass and play as a team in attack is evident as they were the team with the least dribbles (12.86) and progressive runs (4.39) per 90.

However, their performance in defence was too naive and wasn’t competitive enough. They were the worst team in aerial duels (won just 34% of them), they had the fourth-lowest challenge intensity (4.8) and committed the least fouls per 90 (10.66). Add to that their poor goalkeeping (Teklemariam Shanko conceded 0.93 goals more than expected per 90, the worst in the tournament) and lack of clinical finishers (just 2 goals from 3.44 xG) and then all their positives become irrelevant.

It will still be interesting to follow some of their outstanding performers over the next few months to see if they progress in their careers. We analyzed some of them in this analysis.

Morocco qualified comfortably from Group C with two wins and a draw, finishing first over Gabon, Comoros and Ghana. They fully deserved their results as they had the second-most xP with 6.9. An important part of their solid performances came from their pressing.

The Atlas Lions had the lowest PPDA in the Group Stage (5.26), meaning they didn’t let rivals pass the ball around without pressing and getting into challenges. Their insistence also reflects on them having the highest challenge intensity with 7.8.

Their effective press was key for Morocco to have the fourth-highest average possession (60%), the second-most xG (6.32) and the highest xG per shot (0.181, meaning the shot from excellent positions most of the time).

Recovering the ball far from their goal also meant rivals couldn’t threaten them and Morocco conceded just 2 goals from 1.11 xG against (lowest).  They also limited their rivals to speculative shots and had the lowest xG per shot conceded (0.053).

If they continue to show their intense style and force rivals to play in their half, Morocco have very good chances of progressing to the quarter-finals, especially considering they play Malawi in the Round of 16, one of the weakest teams as we saw previously in this data analysis. With three players in the EPL, three in La Liga and five in the Ligue 1, Morocco has the individual quality to change games too.

Nigeria have been one of the positives of the Group Stage. The Super Eagles won every game in Group D, scoring 6 goals and conceding just 1. Their 7.1 xP are also the highest in the tournament.

The team coached by Augustine Eguavoen has shown some excellent offensive football, with their directness and ambition to progress being too much for rivals to cope with. Despite having an almost average possession (52%), Nigeria are still the team with the most progressive passes per 90 (74.79) and played a lot in dangerous areas, registering 20.48 touches in the box per 90 (second-most). Their presence in attacking zones translated in the highest xG (7.41) and the most shots per 90 (13.97).

They also have some excellent players who can progress by themselves and know how to use them. Nigeria attempted the second-most dribbles per 90 (29.79) and had the most progressive runs per 90 (20.79). They’ve been unstoppable going forward and on top of that, they win 63% of their defensive duels, the second-highest percentage in the AFCON:

The Gambia heroics in Group F meant Tunisia finished third and will face Nigeria in one of the best games of the Round of 16. With their dominant display so far, Nigeria are the favourites to win the tournament.

To finish this data analysis, we have chosen an XI composed of players who have greatly stood out in some statistics that are key for their position (at least 180 minutes played).

With you, the AFCON 2021 Statistical XI, eleven players from eleven different countries, all outliers in some aspect of the game: 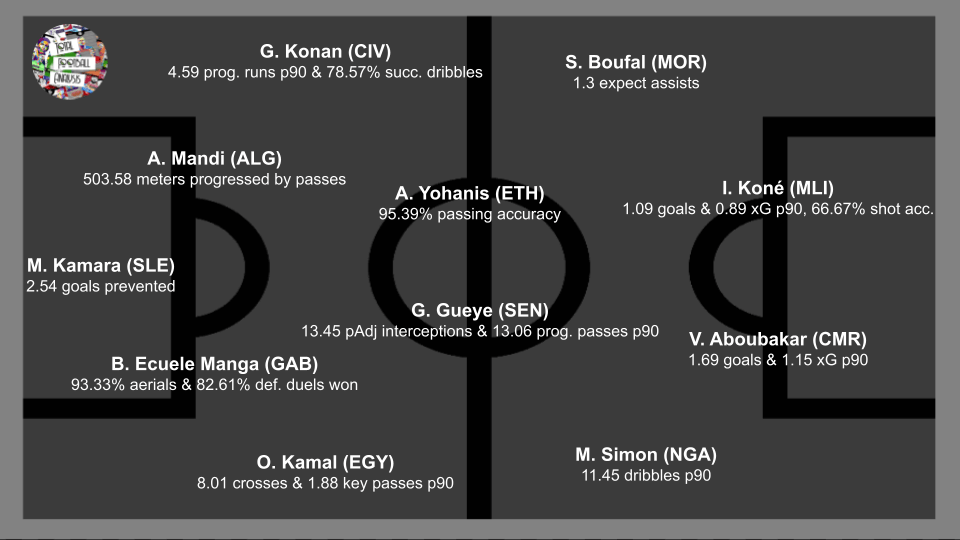