Amadou Haidara is one of the most talked-about names of this January transfer window. The Mali international has been strongly linked with Manchester United and Newcastle United but pretty much everyone is being linked with Newcastle currently. Haidara has been at RB Leipzig for three years now and during his time he has established himself as a very effective midfielder in the Bundesliga. As designed by the Red Bull Group, he started his career with Red Bull Salzburg before moving over to their other club Leipzig in 2019, this path has been trodden by many of the great Red Bull alumni including Dayot Upamecano and Naby Keita.

Manchester United’s midfield issues are obvious for everyone to see and finding reinforcements will be top of Rangnick’s priorities in the window and in the summer.

In this tactical analysis and scout report, we look at why Manchester United are so keen on Haidara, and what he could bring to Old Trafford.

Haidara can be classed as a box-box midfielder. He has great energy and fitness to get up and down the pitch to contribute in both boxes. He usually plays on the right of a midfield double pivot however is versatile enough to use on the left side if needed. Below is his heat map which shows he is active in both halves of the pitch, there is less action on the map than desired as Haidara has missed several games to injury this season. If acquired by Manchester United, he will almost certainly be playing in the midfield two of Rangnick’s 4-2-2-2 tactics alongside either Fred or McTominay. 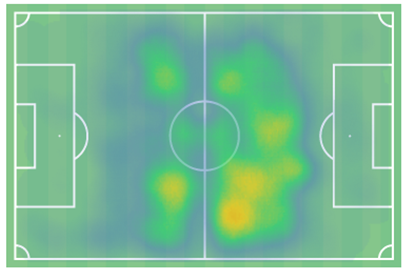 The use of data in the recruitment and scouting process only ever grows in importance and therefore must be looked at data when analysing Haidara. Also looking at the data can highlight some of Haidara’s key attributes and strongest facets of his game. As eluded too Haidara can contribute in both boxes so we will address how he is doing this. Although Haidara contributes in the attacking phase, it is rarely done with goals and assists, managing only three goals and zero assists in this campaign. Haidara however is effective in both offensive duels and attacking actions. Haidara as you can see from the graph below is just above average in these metrics per 90 amongst Bundesliga midfielders. 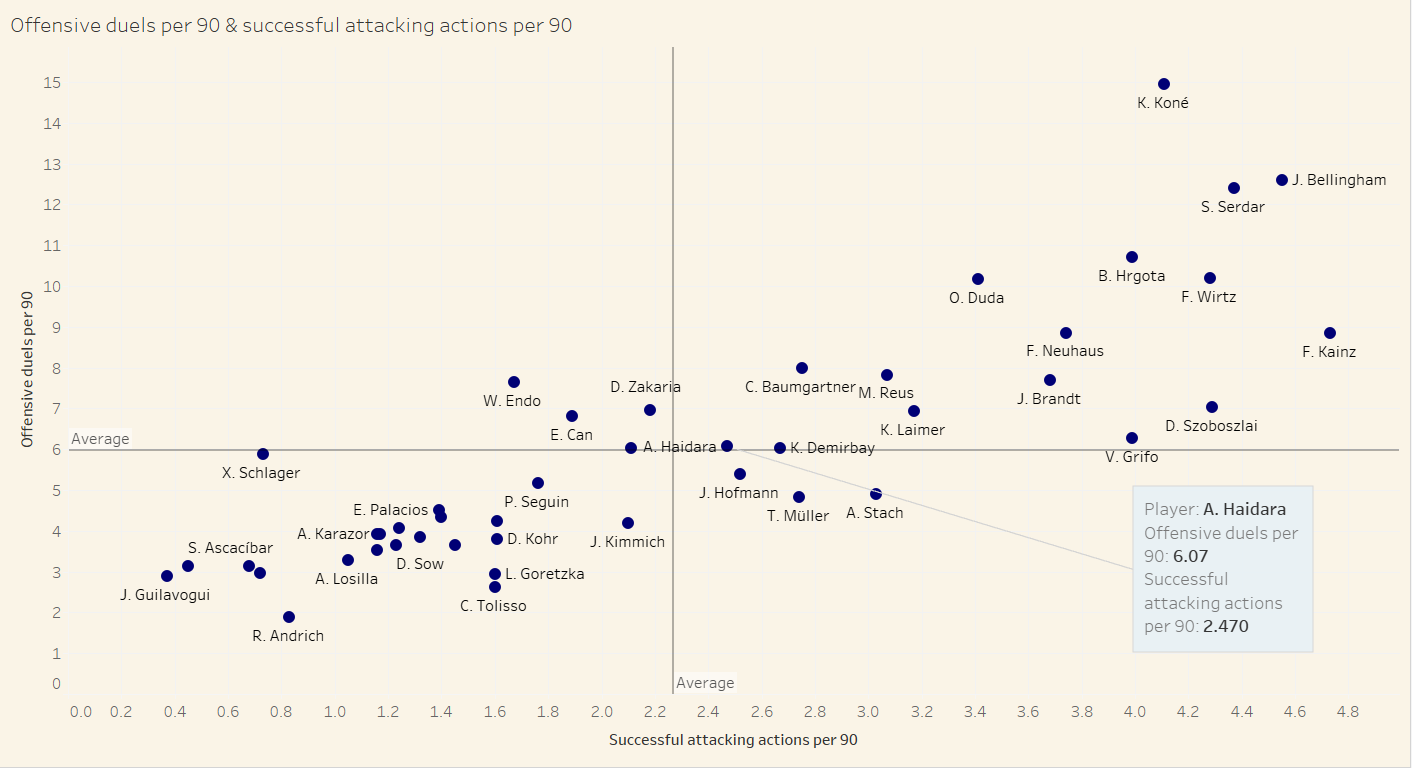 This tells us that Haidara is active in helping his team in the attacking phase but how does he do this. One way is through ball carrying and dribbling. Haidara is a good dribbler of the ball within the context of midfielders. This is shown below by the graph which shows dribbles per 90 and successful dribble %.  Haidara is just above average in both metrics amongst Bundesliga midfielders with 2.3 dribbles per 90 at a success rate of 58%. 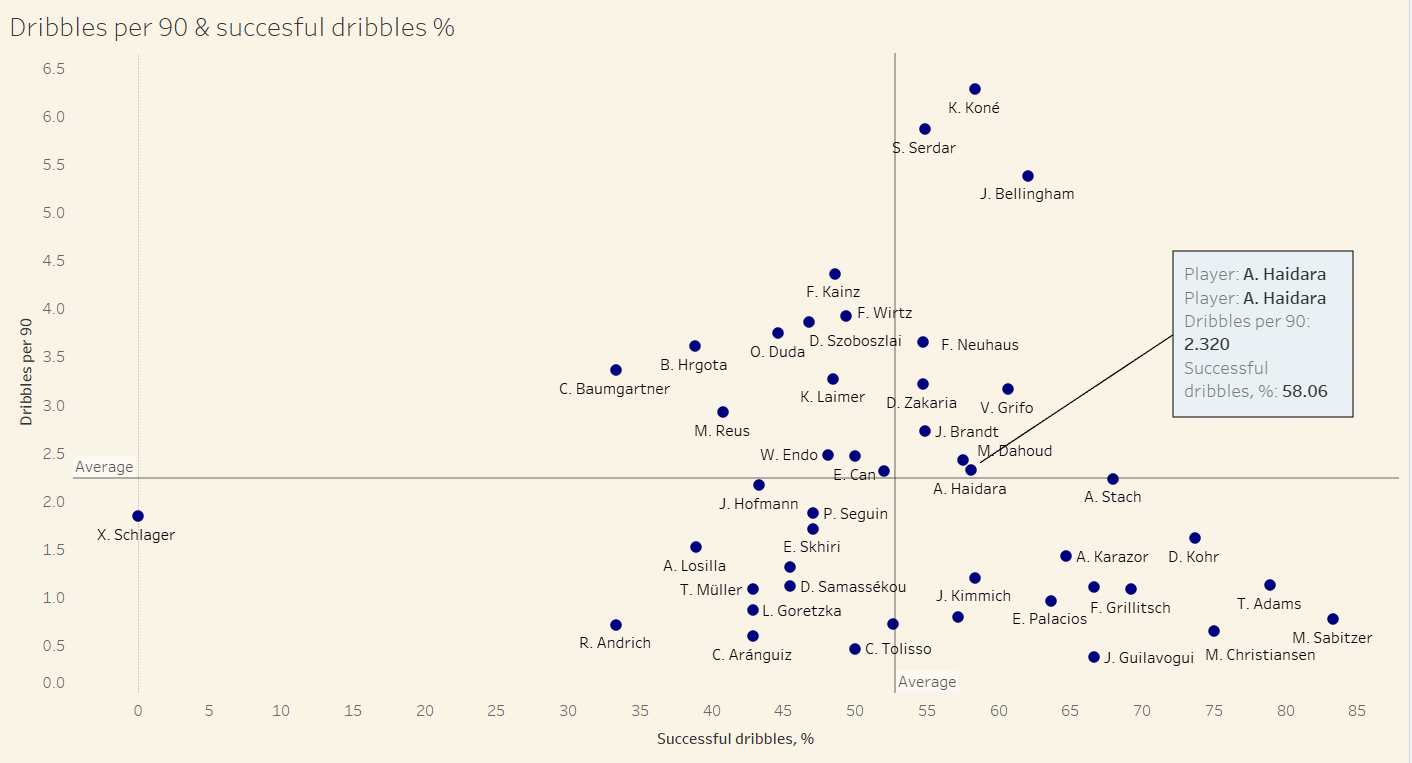 Yet again Haidara is above average in both metrics chosen. Another way Haidara can contribute to the attacking phase is through his passing. For this graph, we took progressive passes per 90 and passes to the final third per 90. This demonstrates that Haidara can pass the ball into dangerous areas for the team, again above average in terms of Bundesliga midfield. 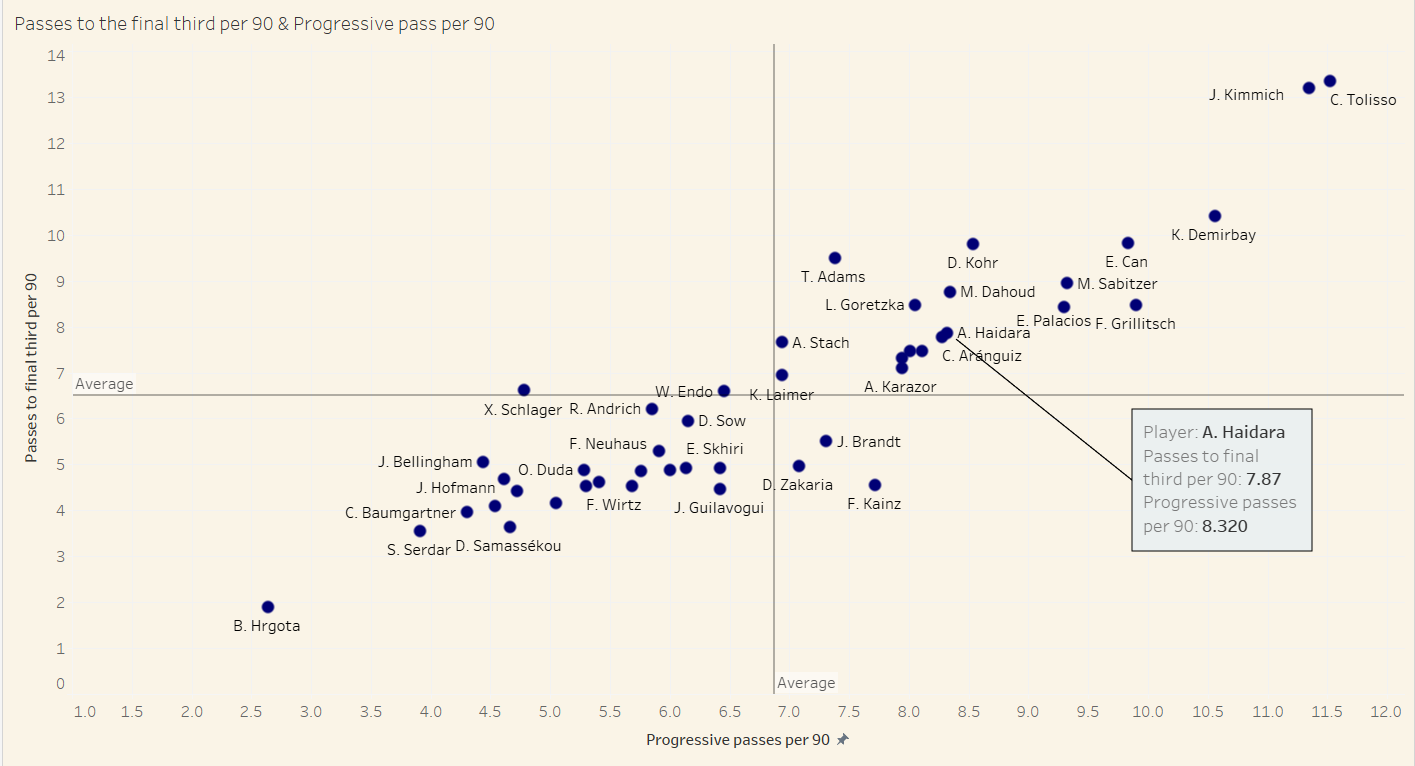 In addition to attacking metrics, looking at defensive metrics is also important. Especially for a player like Haidara who is active in both phases of play. Below is a graph showing PAdj Interceptions and PAdj slide tackles. 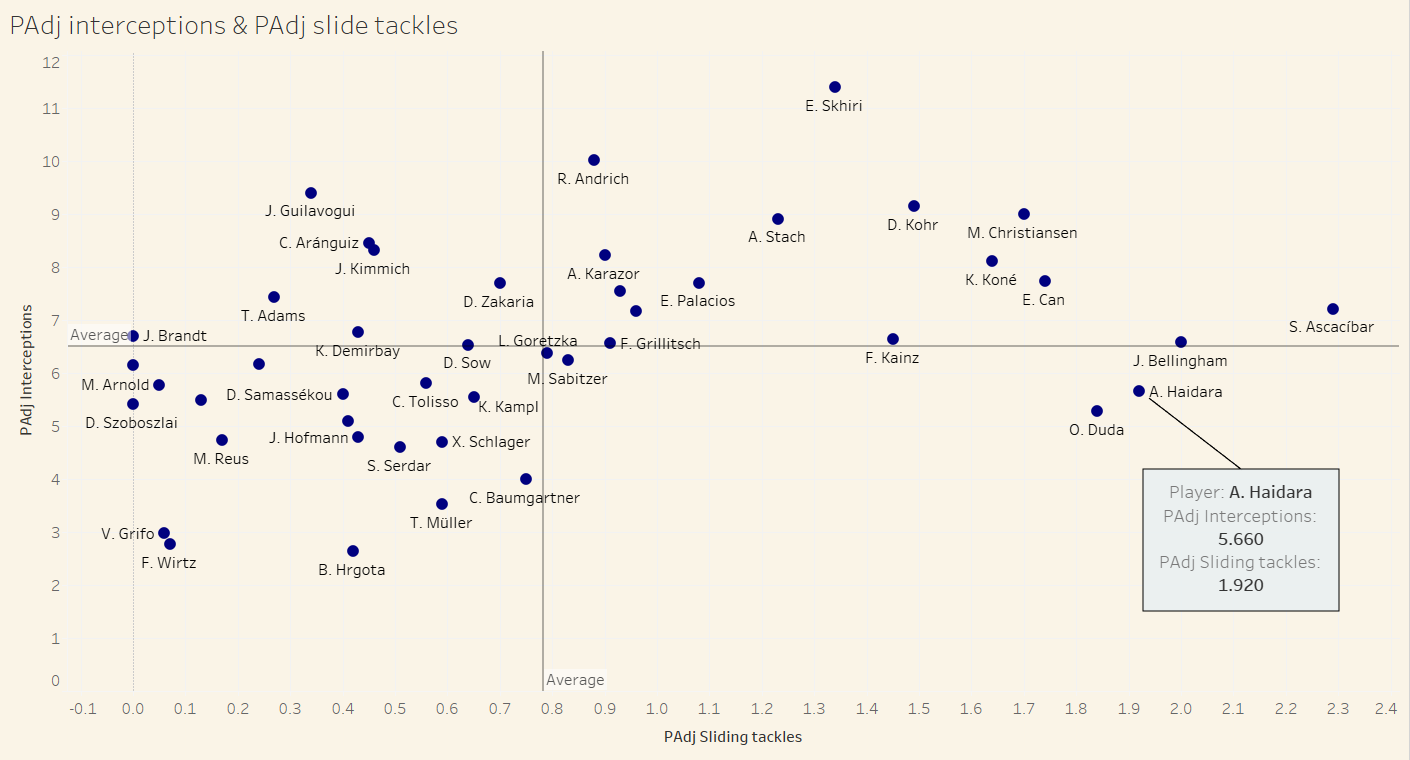 PAdj is a possession adjusted metric to evaluate defensive performance but if the game possession was 50/50 to remove the bias the metrics would have towards teams who do not dominate possession. Haidara is well above average in slide tackles with 1.9 per 90 but slightly below average in interceptions with 5.6, this is likely due to Haidara choosing to make tackles rather than interceptions. 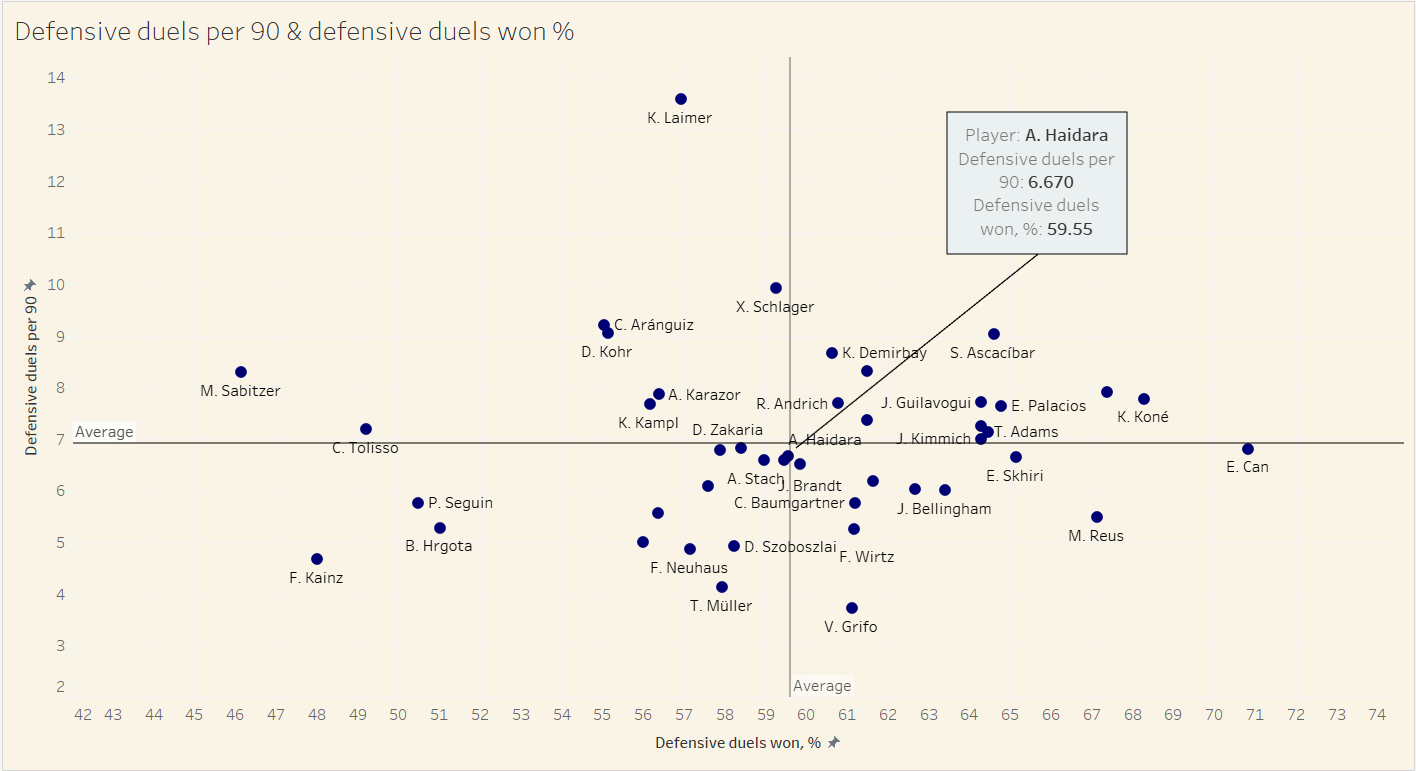 Hopefully, this analysis of the data indicates how versatile Haidara is and how this versatility and ability to do many facets of the game to a good standard, is attracting the interest of Manchester United.

As we have seen in the data, Haidara is an above-average progressive passer of the ball and can work the ball into the final third well. He has a wide array of passes in his locker from clever through balls to long diagonal passes. By being able to play different types of passes it makes Haidara effective in different situations and games. The first example we will look at comes in a Champions League tie against Club Brugge. Haidara has received the ball on the halfway line.

He is going to carry the ball into their half before playing a brilliant pass between the Brugge Centre-back and wing-back. The pass goes into the highlighted space for his teammate to run onto.

This is a great defence-splitting pass and is a great example of a progressive pass and a pass into the final third.  Allowing his team to have the ball in a more dangerous area of the pitch.

The next pass shows a more creative aspect of Haidara’s play and shows that he really can be effective deeper and further forward. The ball has been played to Haidara however the pass was heavy, so Haidara’s touch has meant the ball has bounced into the air, but Haidara improvises and plays a clever looped pass over the Frankfurt defensive line into the highlighted space for his teammate to run onto.

The pass is well-timed and place and forces a brilliant last-ditch tackle from the Frankfurt defender.

Both passes indicate that Haidara possesses quality on the ball in both the buildup and deeper phase of the attack, in addition to in and around the box which makes him an effective box to box midfielder.

Again, as shown in the data Haidara makes a strong defensive contribution to the team. He does this with a combination of pressing, interceptions, and slide tackles. As with all Red Bull teams, counter-pressing is an important feature of their game and this means Haidara is well versed in the art of counter-pressing, something which will be music to the ears of Ralf Rangnick.

This example against Borussia Dortmund shows a real effective counter-press from Haidara. Dortmund has just won the ball and Witsel makes a side-footed pass to Jude Bellingham, as the pass is made you can already see Haidara make a run to press Bellingham.

By the time the ball arrives at Bellingham, Haidara is on him and challenging to win the ball back – which he does using his strength. Bellingham falls over due to the pressure Haidara places on him.

No doubt Rangnick will want to implement an aggressive counter-press in Manchester and adding players like Haidara play a big part in this as he is already capable of playing and understating the system, which will make the implementation easier.

The two mentioned strong attributes of Haidara’s game, play into Haidara being a great player in the transition phases both attacking and defensive transition. Haidara can stop opposition attacks with strong counter-pressing and can use his passing ability to instigate direct and vertical attacking transition, again something which Rangnick will want to implement. The following example is a perfect example of this, where Haidara breaks the play up before starting an attack with a great pass. The game is against Greuther Furth earlier in the season and they have just turned the ball over and are playing a pass inside.

Haidara intercepts the pass with a brilliantly timed slide tackle. This then causes a turnover of the ball.

As the ball rebounds out the tackle, Haidara jumps to his feet and looks to play a direct vertical pass forward to instigate the attack. Haidara plays a great pass to the corner of the box for his teammate to run onto and in the process, the ball is now in the box and RB Leipzig has possession in a dangerous area instantly after winning the ball back.

The tactical analysis and scout report should indicate what Amadou Haidara can offer to Manchester United and why Rangnick is keen to make him his first signing. When implanting a new tactical system like Rangnick is, bringing in players who are well versed and effective in the system is a smart approach. Haidara will bring this; he is effective in all phases of play and can make a strong contribution in these phases. Haidara is a versatile footballer who will make a great addition to Manchester United.