AFCON 2021: The most impressive attacking actions of week 2 – tactical analysis

The second week of the AFCON 2021 witnessed some better and more entertaining games than the ones played during the first few days since those games were mostly decided by one or two goals maximum. However, this past week was marked by an awakening of most teams who finally got used to the difficult African atmosphere, weather conditions and most importantly, the players’ bodies started to cope a bit better with humidity.

This allowed viewers to see matches end with some high scores such as the Cameroon vs Ethiopia match which ended with a heavy 4-1 win for the hosts, which helped them in securing their qualification to the knockout round despite making a draw with Cape Verde in their last match.  Burkina-Faso were also able to guarantee their qualification to the Round of 16 from Group A with four points.

The end of the first AFCON week also witnessed some solid performances from Malawi who won 2-1 against Zimbabwe, but especially from Morocco who won 2-0 convincingly against Comoros. Moreover, Nigeria beat Sudan with a 3-1 final score, making sure to not drop any point in their first two games such as Morocco and Cameroon. These teams proved very early that they can go far in the competition since they caused defensive issues to all their opponents so far.

In addition to these powerful teams, Tunisia were able to bounce back on Sunday by making an entertaining performance and scoring four goals against Mauritania, proving that the Carthaginians are not giving up despite the refereeing dilemma that occurred against them in their first match against Mali.

But before delving into the best attacking actions and especially those that were successful and led to goals, it should be mentioned that Algeria’s attacking performance against Equatorial Guinea was good. Their main problems were related to finishing and to concentration in front of goal despite having some of the best African players such as EPL’s and Manchester City’s Riyad Mahrez, Serie A’s and Milan’s Ismaël Bennacer, Lyon’s Islam Slimani, Youcef Belaïli, Nice’s Youcef Atal and more.

In this tactical analysis scout report, we will be analysing the attacking actions that led to goals and those that were successful during the last few matches of the tournament, while making sure to delve into the tactics behind such actions, movements and passing combinations/ideas.

Cameroon’s physical playing style prevailed in their match against Ethiopia as they were able to relatively dominate the game and be dangerous whenever they reach the final third mainly using crosses from the wings or individual penetrations. Ethiopia’s defensive line wasn’t able to resist the individual physical strength of players like Vincent Aboubakar and Jean-Eric Maxim Choupo-Moting. And as you can see in the following picture, Aboubakar was the source of Cameroon’s first goal of the match when he avoided his marker and attempted a powerful shot from distance. Having the awareness of his ability to disturb the goalkeeper with the shot gave Aboubakar extra determination to shoot with power in order to score or in the worst cases, oblige the goalkeeper into giving the ball away after preventing it from reaching the net. And that’s exactly what happened before Collins Fai got the ball and crossed it to Karl Toko Ekambi who was unmarked inside the box and therefore scored the goal with a powerful header. 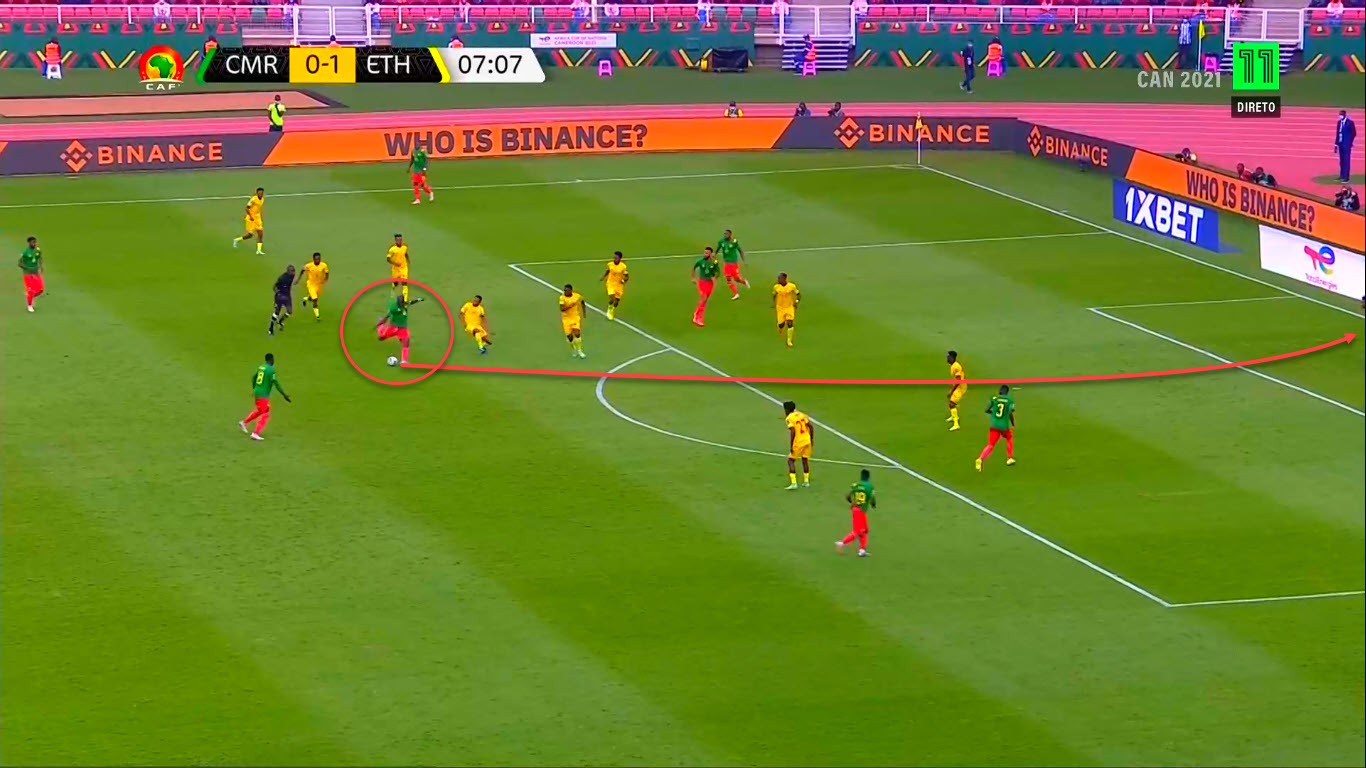 The second Cameroonian goal came following 12 successful passes in an action that was initiated from Cameroon’s goal before building up slowly and creating a numerical superiority on the right-wing in order to free Collins Fai who started running and waited for a pass behind his markers and at the back of the whole defensive line. 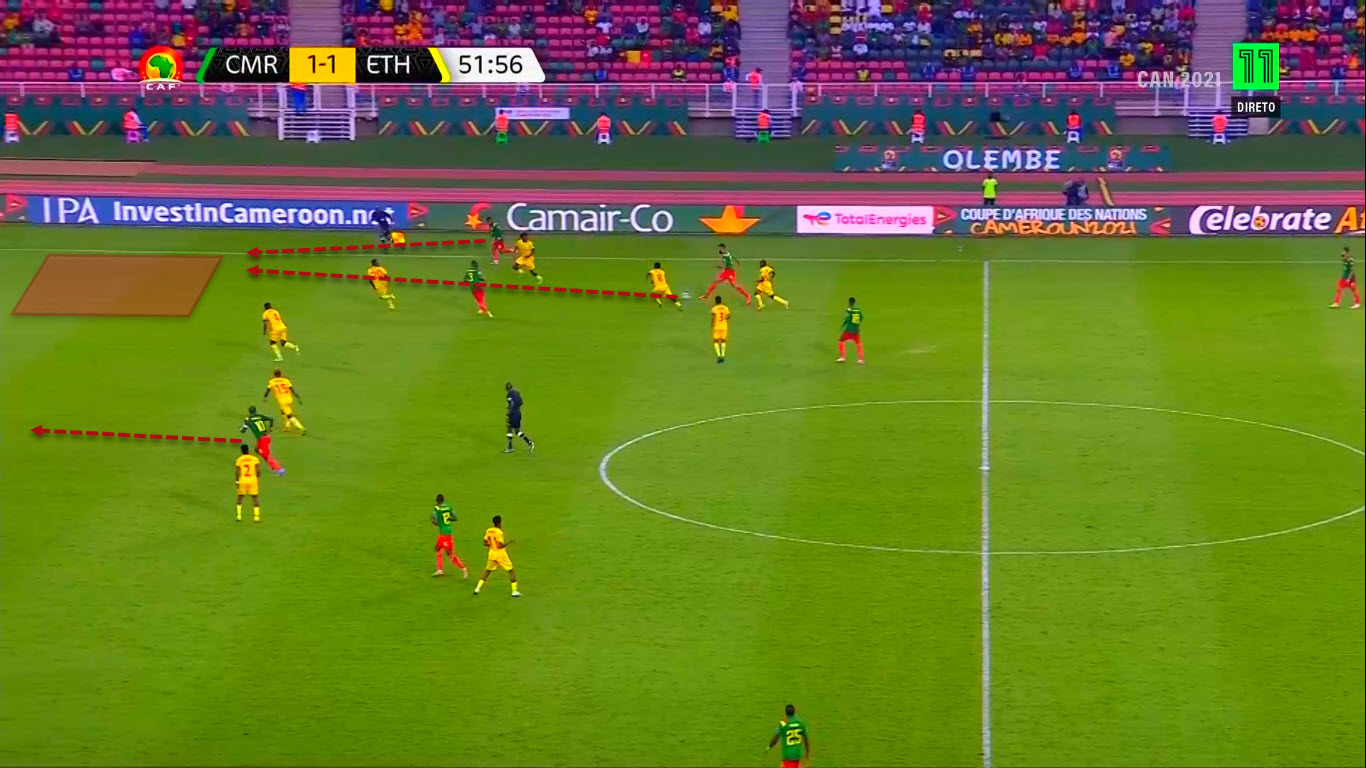 He received the needed pass from Choupo-Moting and saw Aboubakar asking for the ball between two defenders, knowing that he has the advantage over both of them given his physical skills and his ability to win duels and especially aerial ones. Aboubakar was therefore able to exploit Fai’s accurate cross and put the ball beautifully inside the net, by confusing the goalkeeper with a powerful header that hit the pitch just before reaching the goal. 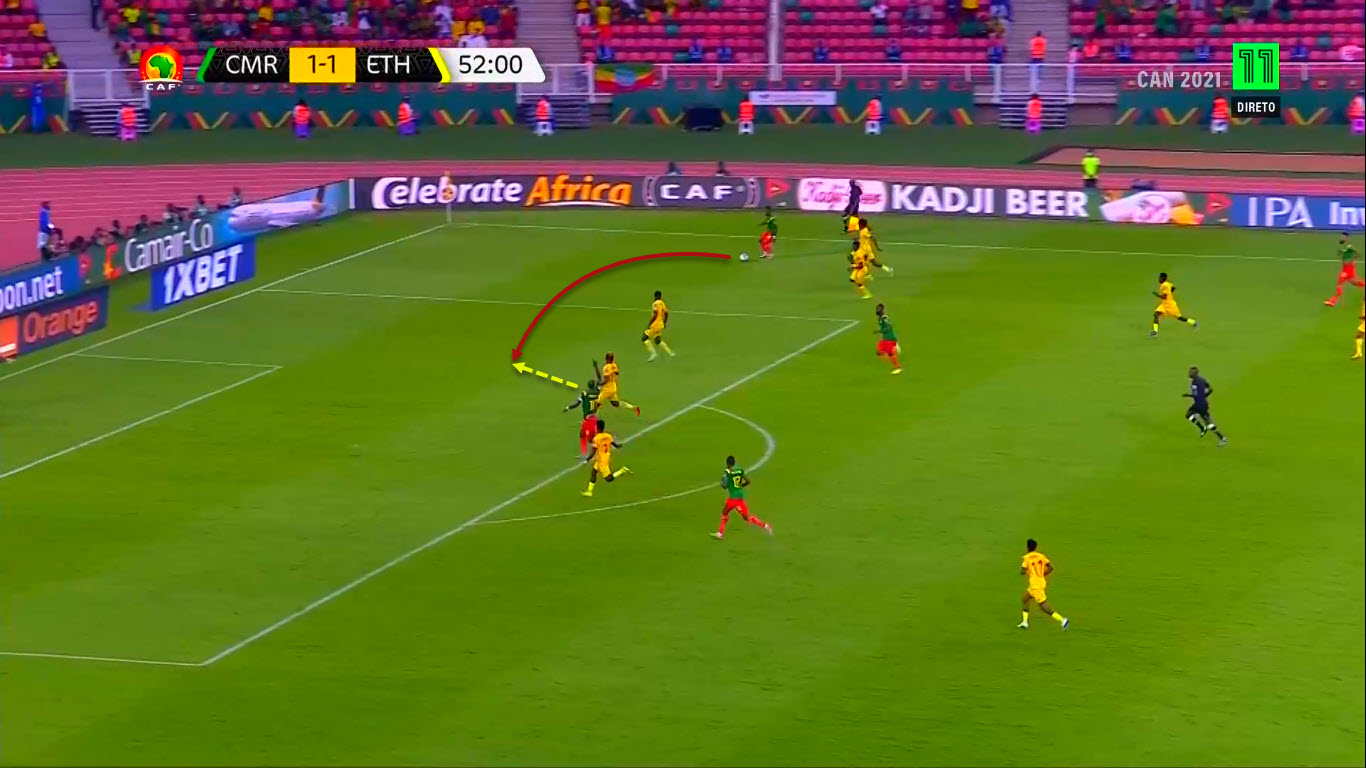 Aboubakar was the star of the match since he was also successful in scoring a third goal at the 54th minute after receiving a through pass while being marked. And then Karl Toko Ekambi completed the festival of goals thanks to his individual efforts enabled him to dribble past two defenders and shoot the ball accurately despite not having a clear vision of the goal since it was covered by two players and a goalkeeper.

Tunisia’s second match of the group stage was approached with the adequate mentality from start to finish knowing that Tunisia scored the first goal of the match at the third minute following a powerful shot from Zamalek’s right back Hamza Mathlouthi. Then, Saintetienne’s Wahbi Khazri was able to add a second goal soon after thanks to the great build-up from Brøndby’s Anis Ben Slimane who received the ball inside the box while being marked by two defenders and therefore, he preferred to fix his opponents and provide an assist to Khazri who was better positioned than him and who finished the job successfully with an angled but not too powerful shot. 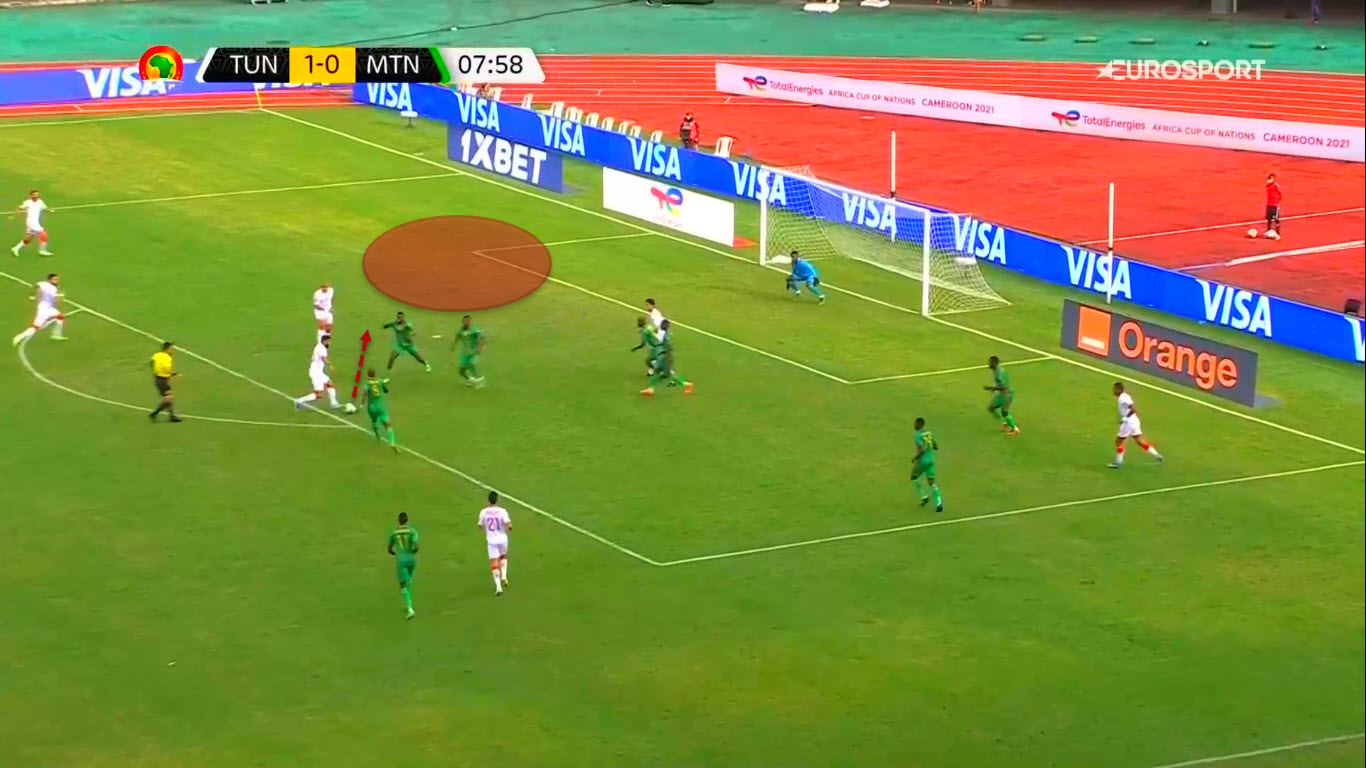 The third Tunisian goal was one of the best goals of the tournament so far since it was beautiful to see. Al Ahly’s Ali Maâloul advanced with the ball on the left-wing and saw Khazri waiting for a pass in the middle. At the same time, Ghailene Chaalali was just behind him. As soon as Maâloul gave Khazri the pass, the latter tricked his marker by letting the ball go to Chaalali while moving towards the goal to receive a through pass from Chaalali and scoring a goal from three ball touches including a shot. It was a tactical combination that showed a lot of chemistry and cohesion between these players and if repeated intelligently in tougher matches, Tunisia will be able to create defensive problems for their next opponents. 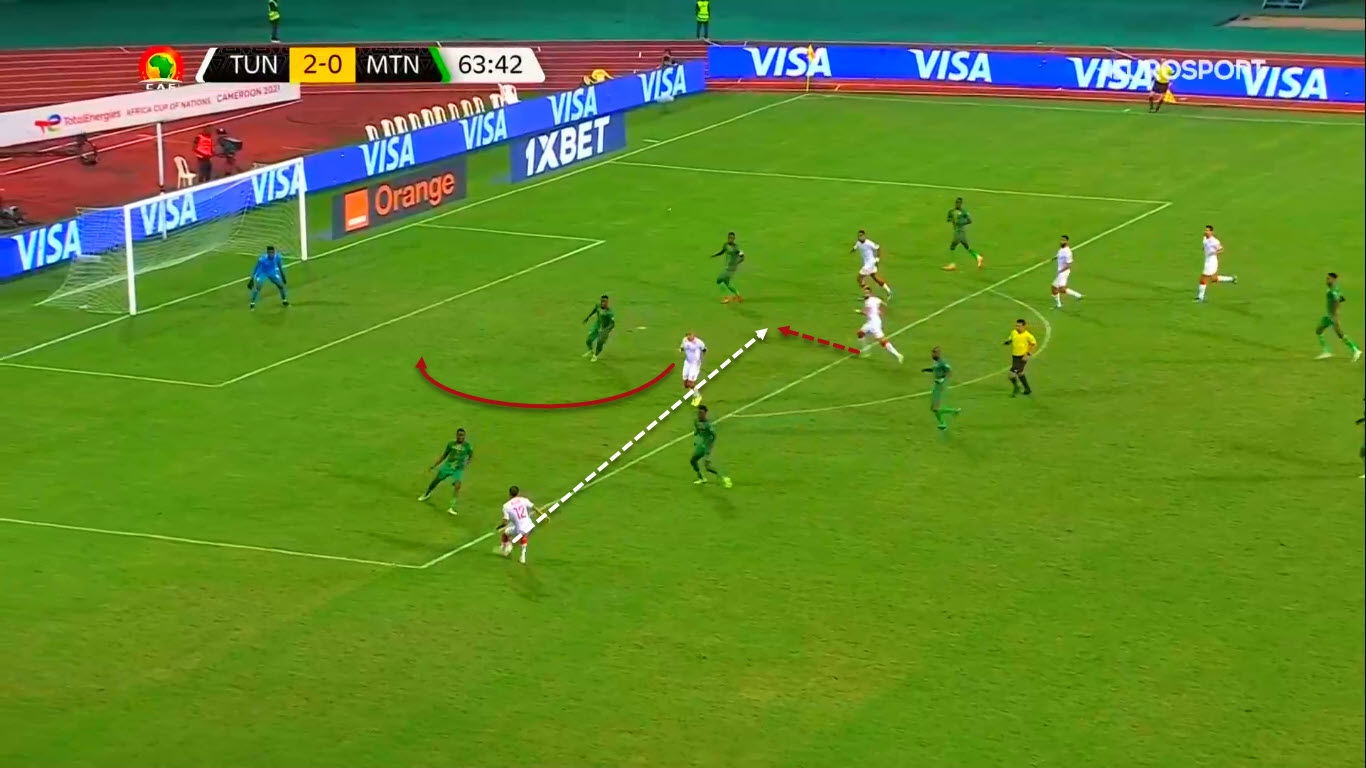 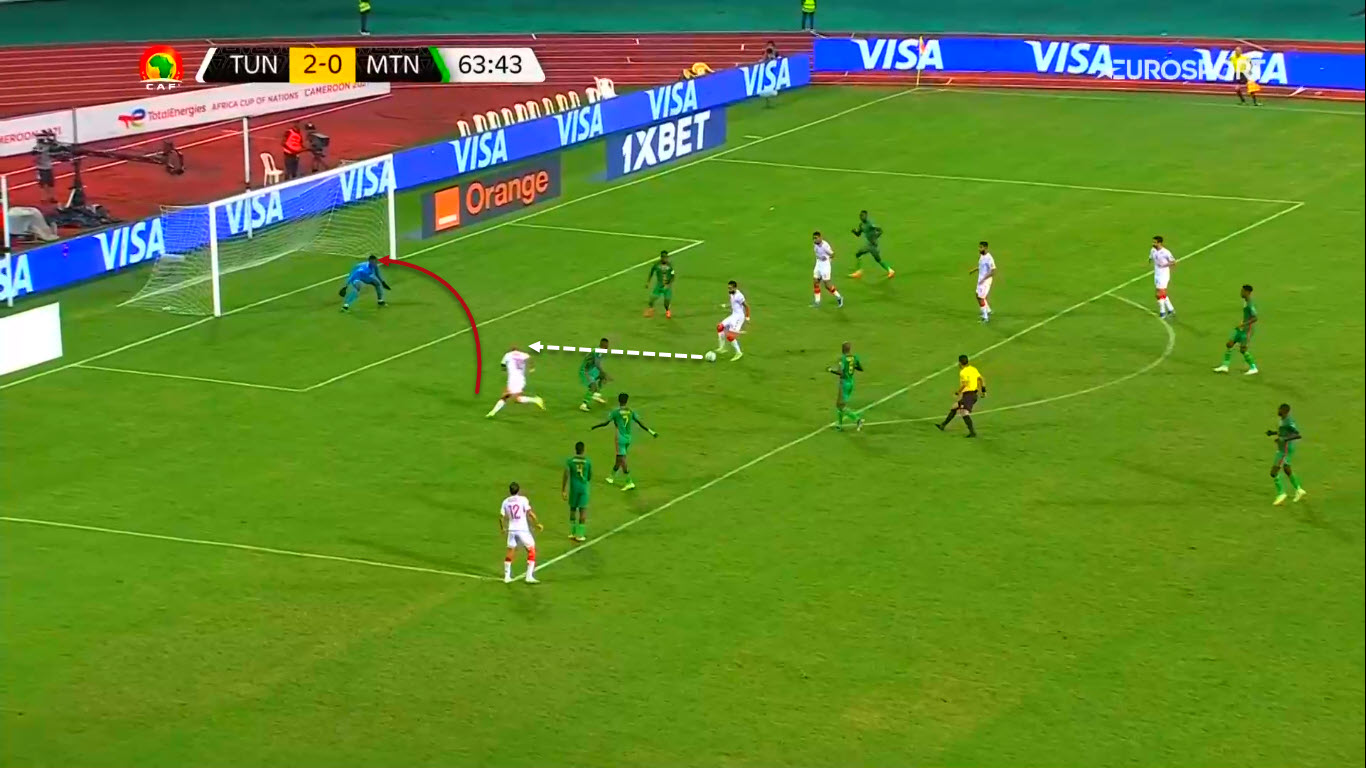 Another impressive action occurred during this match at the 65th minute when Khazri had the ball in the final third and saw the striker Seifeddine Jaziri’s movement at the back of his marker. 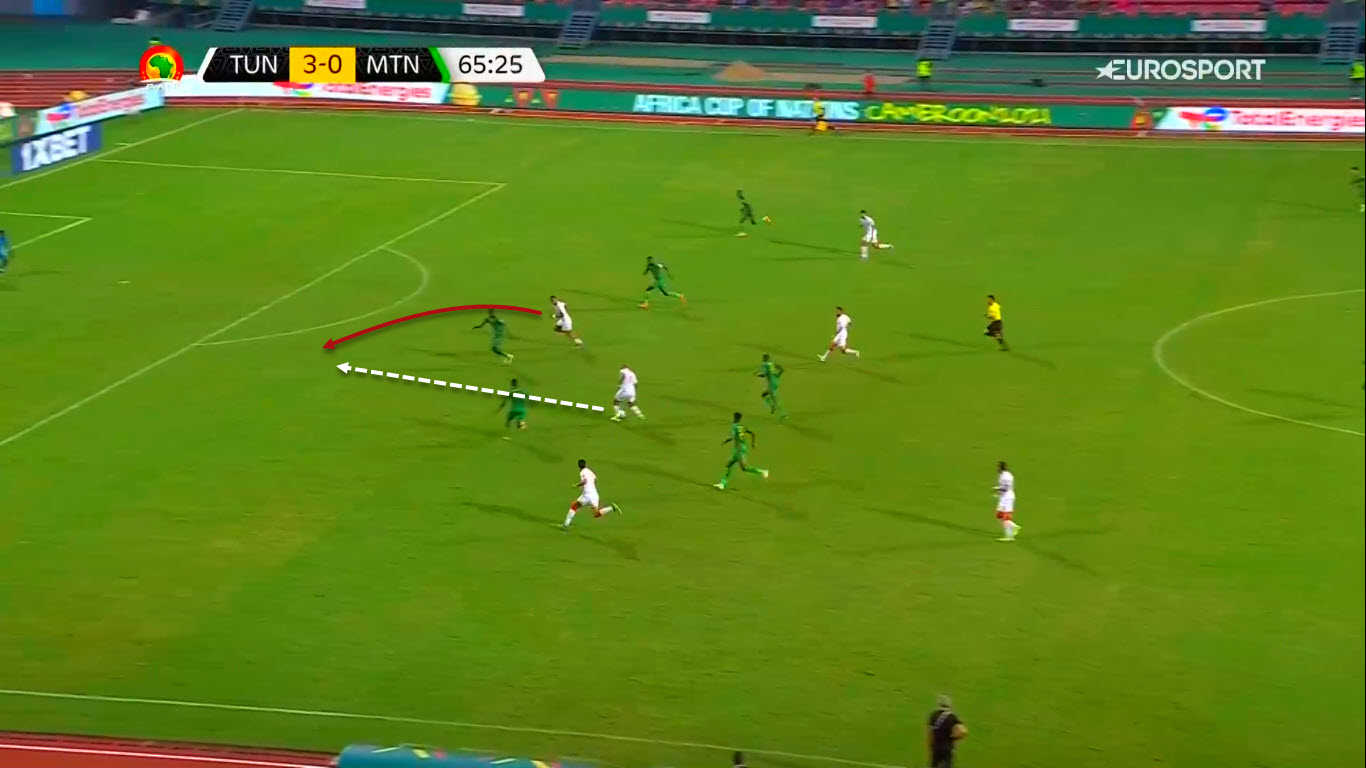 Moses Simon has been proving since the start of the tournament that he is a difference-maker who can become one of Nigeria’s best players in the near future. He was the main source for Nigeria’s attacking strength during the two played matches so far. In this goal action, he started from that point of the pitch to reach the box and score, overcoming the numerous players marking him with a chipped pass to Taiwo Awoniyi who intelligently provided him a through pass in the free space, as it is shown here. 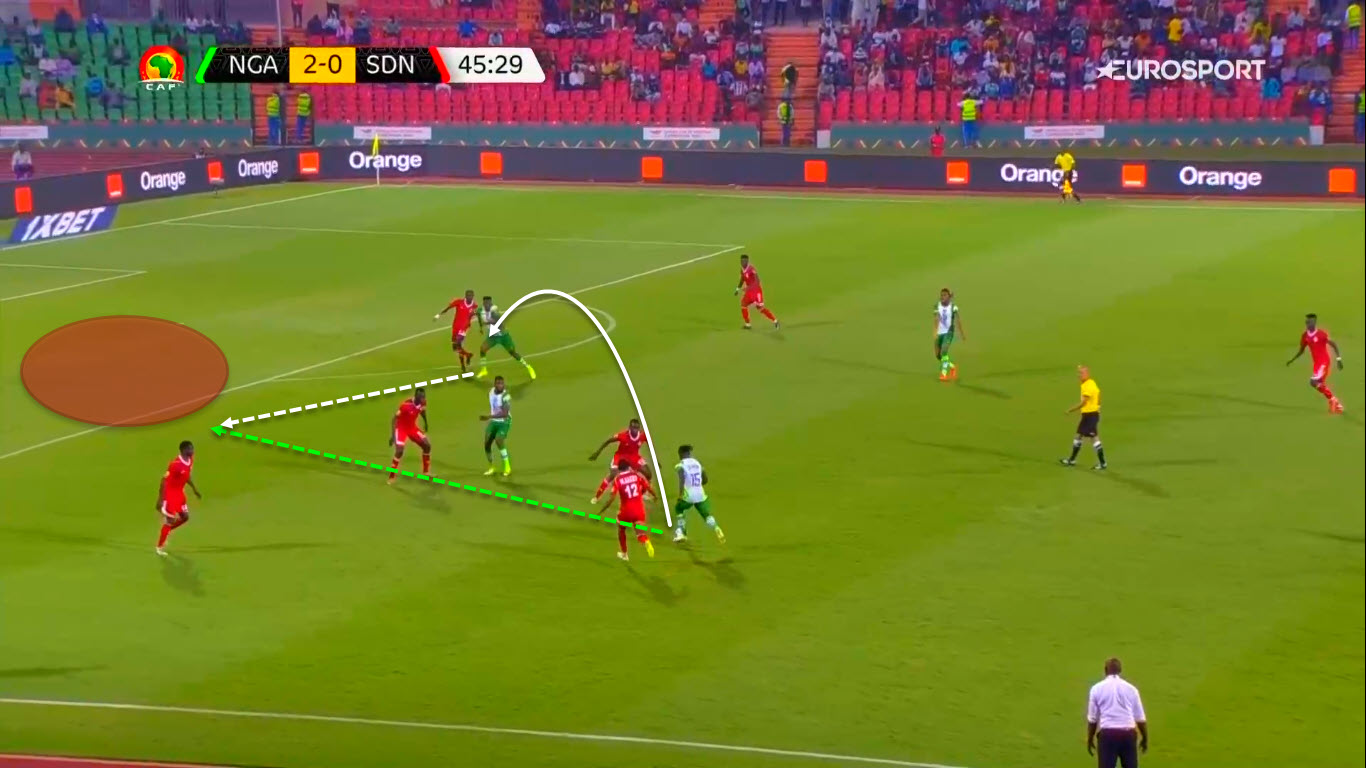 Morocco’s attacking performance was also a powerful one against Comoros as they were able to score two goals. The first goal was an action initiated by Achraf Hakimi on the right-wing, before crossing the ball and finding Ayoub El Kaabi. After blocking the latter’s shot, Selim Amallah found himself with the ball in a very good situation, all he needed to do is to dribble past the two players attempting to block his shot in order to create a possible trajectory for his shot, which he succeeded in doing beautifully. 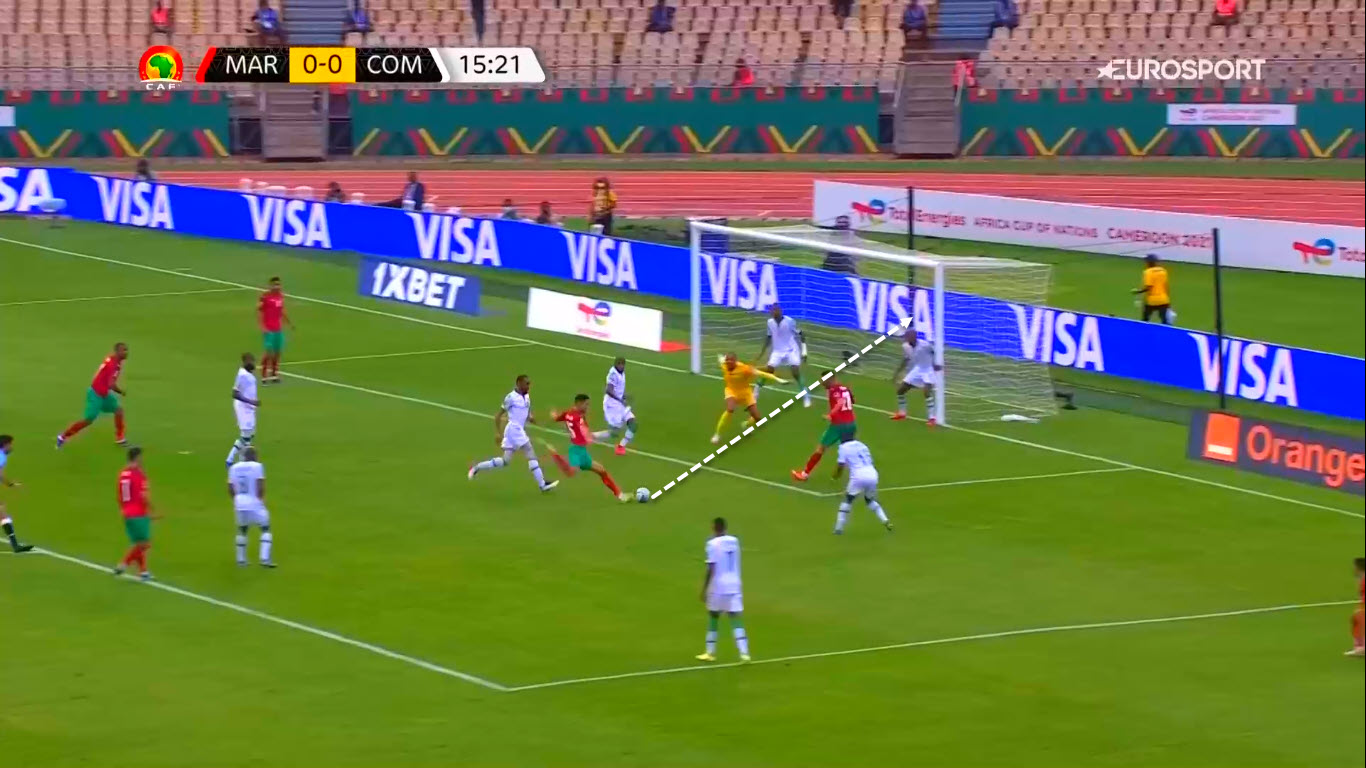 Cameroon, Tunisia, Morocco, and Nigeria were the teams that excelled from an attacking perspective during their second group stage matches. With teams like Algeria, Senegal, Ghana, Guinea and others still struggling to find their best attacking form, the previously mentioned teams have more chance to reach the final stages of the tournament if they keep their level of performances as high as possible.