The rivalry between the Seagulls and the Eagles is well documented but does not draw the attention of many in English football, compared to the North London Derby and the Manchester derby.

Regardless of media attention or fan appreciation, the derby between Brighton and Hove Albion and Crystal Palace dates way back and is as fierce as ever. While the completeness of this fixture lives on, one thing has changed since yesteryear, the quality of football played by both sides.

Years ago, this game was played in the EFL Championship, but now with Graham Potter and Patrick Vieira at the helm of their respective clubs, the quality of football has seen a massive change in the right direction. Since his Graham Potter managerial introduction into English football, he has been a breath of fresh air, with his playing style, which is quite easy on the eye. On the other side Patrick Vieira, who has been impressive during his first year as Crystal Palace manager as the question was asked how the Frenchman will help the South London club transition away from Roy Hodgson’s legacy, and so far, has answered all his critics.

In this tactical analysis, I will discuss how Graham Potter set up his team to break down Crystal Palace’s low block, besides analysing Palace’s only goal of the match. Lastly, I will look into the impact of Tariq Lamptey and Brighton’s second-half tactical change.

Away side Crystal Palace made use of a 4-3-3 formation with Jack Butland in goal. In defence Joel Ward, Joachim Andersen, Marc Guéhi and Tyrick Mitchell. In midfield, Will Hughes, Conor Gallagher, and Jeffrey Schlupp. In attack, Odsonne Édouard, Michael Olise and Eberechi Eze. 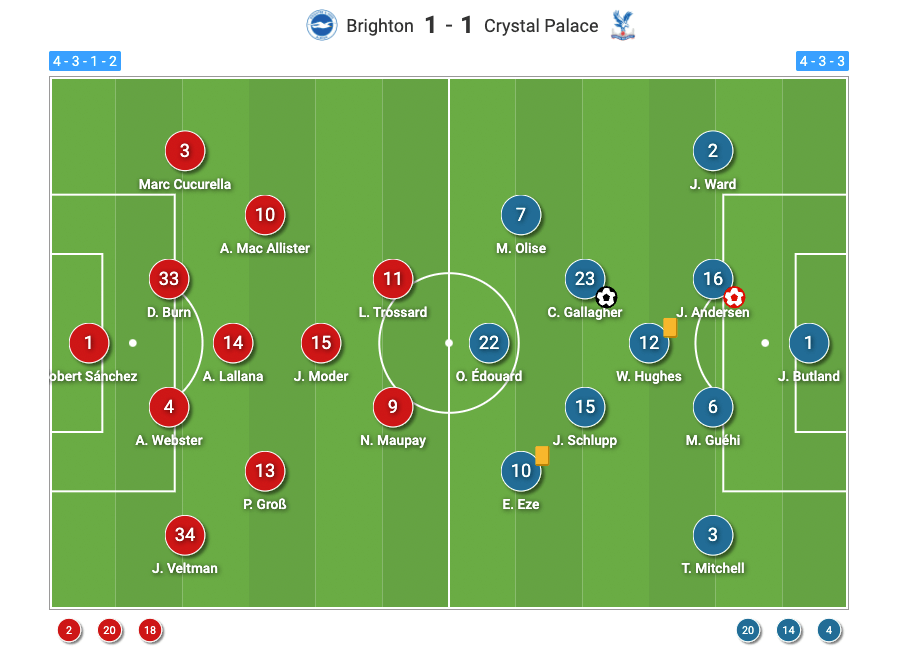 The players at Graham Potter’s disposal are versatile and can operate in a variety of positions, and because of this, when observing the team sheet before the beginning of the match, no one can be sure how Brighton will set up. Initially, most believed Brighton’s men to be deployed using a 4-4-2 out of possession, but in possession, a 3-5-2, which is their bread and butter. As the game began, it was quite clear which direction Brighton was going, regarding tactics used. During their derby game vs Crystal Palace, Brighton made use of a 4-1-3-2/4-4-2 diamond, and within this shape, a common theme of Graham Potter’s team was their use of the wide areas, to create openings and shot-creating opportunities.

Brighton understood Crystal Palace’s out-of-possession game plan; from their initial 4-3-3 formation, both Michael Olise and Eberechi Eze would drop further back and operate on the same line as the midfield, in result creating a 4-5-1 narrow mid-block. This type of defending can be quite effective, because of the amount of numbers in midfield, looking to block central passing lanes Brighton can exploit. With this in mind, when employing this type of defending, the narrowness of the block leaves space out wide, and if exploited correctly, the defending team can get stretched and space opens, and this is exactly what Brighton did, to significant effect.

Brighton could work these areas, with clever wide and central rotations and countermovements, as well as occupying opposition players and space manipulation. Most would usually associate Brighton as a team that loves to keep the ball on the ground and make use of quick short passing and interplay. This assumption would definitely be correct, and Brighton showcased this against Crystal Palace. However, Brighton’s best chances within the first half came through long-range passing from the defence. Centre-back Adam Webster could find the likes of Joël Veltman and Jakub Moder and their right-hand side, in open space, because of occupation and pinning of the opposition.

Here we can see Brighton creating space out wide, as they put Eberechi Eze in a difficult situation. Brighton created a 3v2 situation against Palace’s full-back and winger combo. Eberechi Eze, within the defensive block, to keep the near-side winger within his cover shadow, and to step out when the ball goes wide. Adam Webster, joining Brighton’s attack, drew Eberechi Eze’s attention away, leaving Veltman free in space to receive from Lallana’s pass. 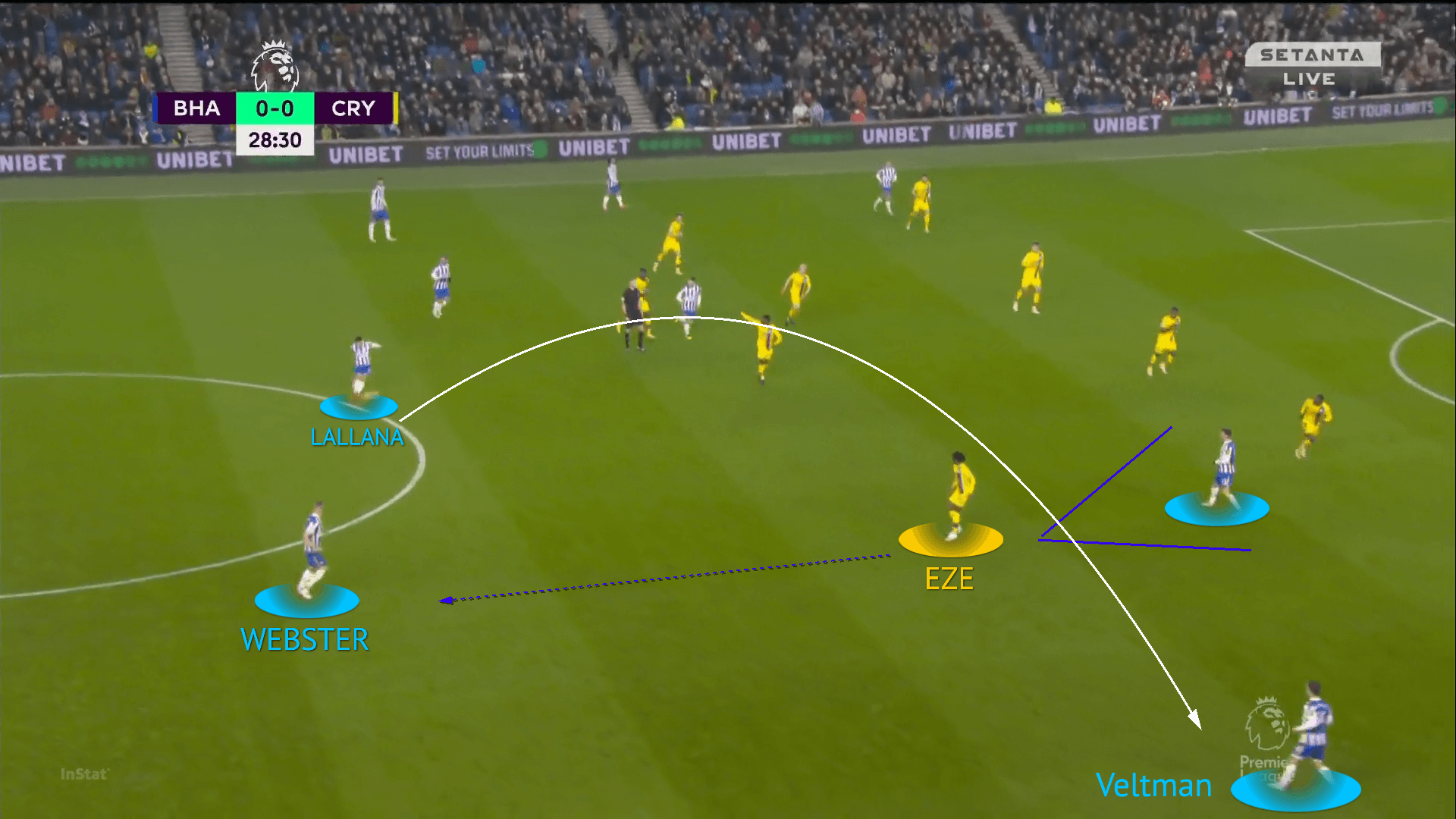 As mentioned, Brighton countermovements played a huge part in creating space and passing lanes. Here we can see full-back Marc Cucurella on the ball, highlighted on the far left of the pitch. Just like in wide areas, Brighton’s pinning was also effective in central zones. Neal Maupay (yellow) is holding his position and keeping Conor Gallaher from stepping out, and as a result creating space for Leandro Trossard to drop into. 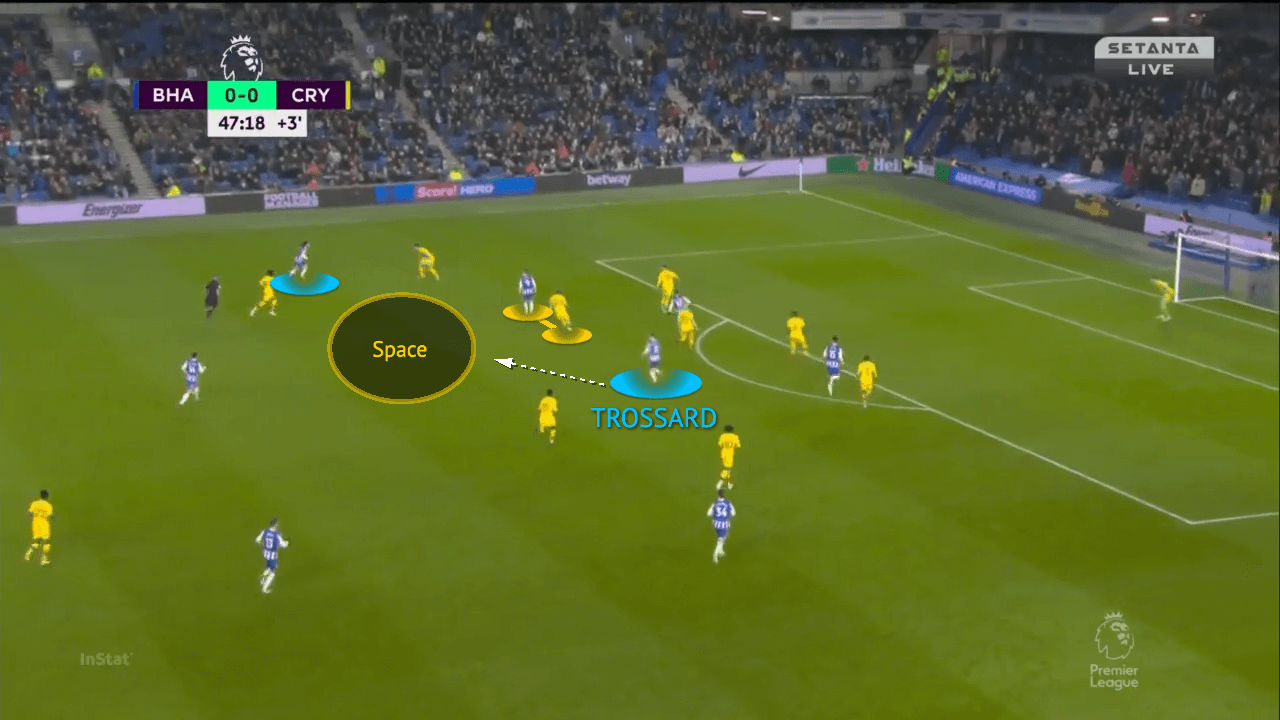 Brighton’s formation switched from a 4-4-2 diamond and a 4-1-3-2, with the occasional sightings of a 4-3-3. These seamless switches of tactical shape were all possible with the positioning of midfielder Jakub Moder. Jakub Moder played as a number 10 for much of the first half, but would position himself on the same line as the two strikers, creating a three-man forward line, where the strikers can either hold their position and keep the line narrow or function wide and create width and support to either full-back. In addition, during the first phase of play, Jakub Moder was more inclined to drop slightly deeper and operate on the same line as the two wide central midfielders.

During the early stages of the second half, a passage of play occurred which perfectly displays all of Brighton’s attacking elements. During this chain of events, Mac Allister, Maupay and Trossard find themselves all out wide. 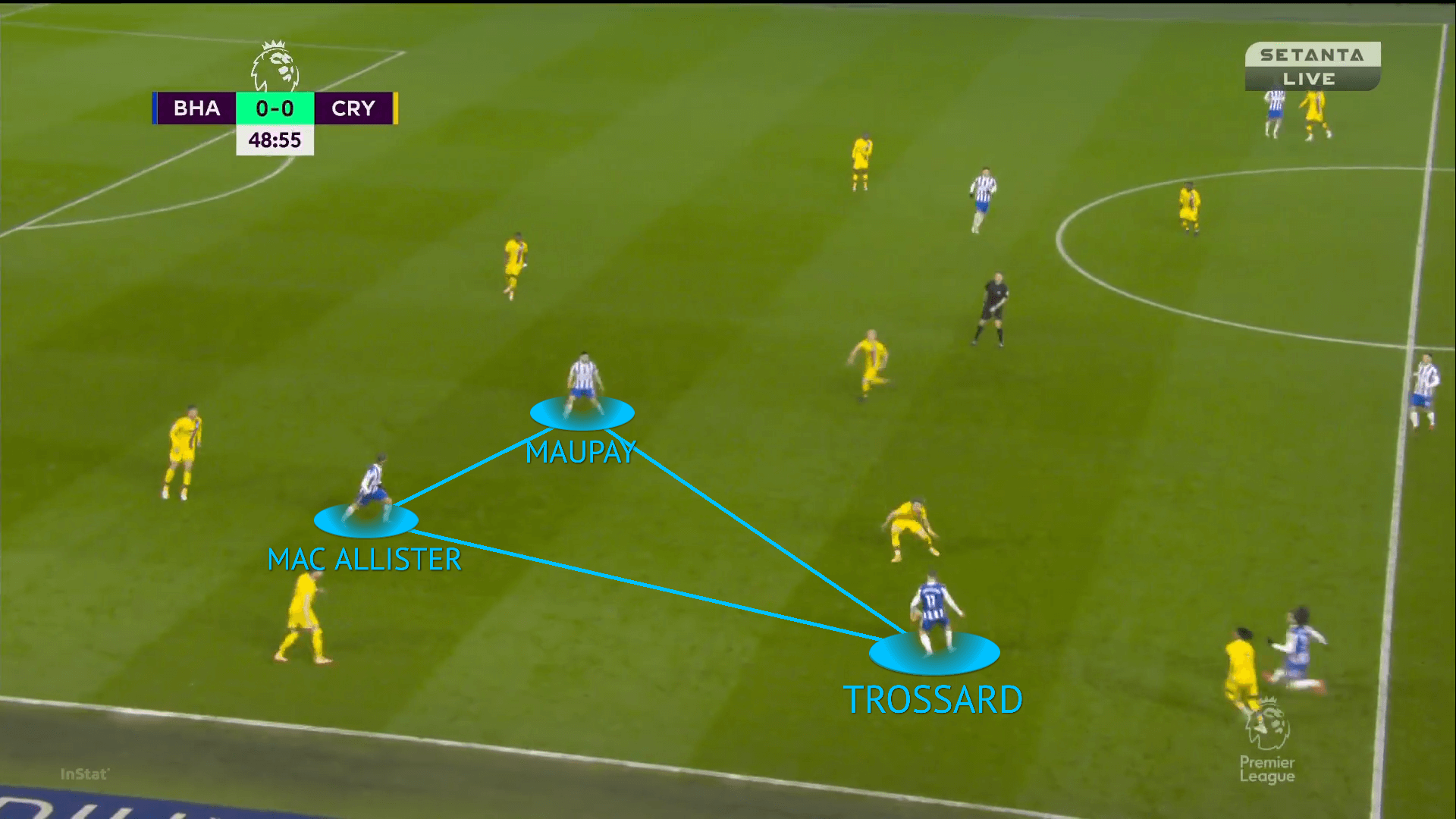 Trossard fires a pass, centrally into Maupay, and as this pass travels, Mac Allister moves inwards. 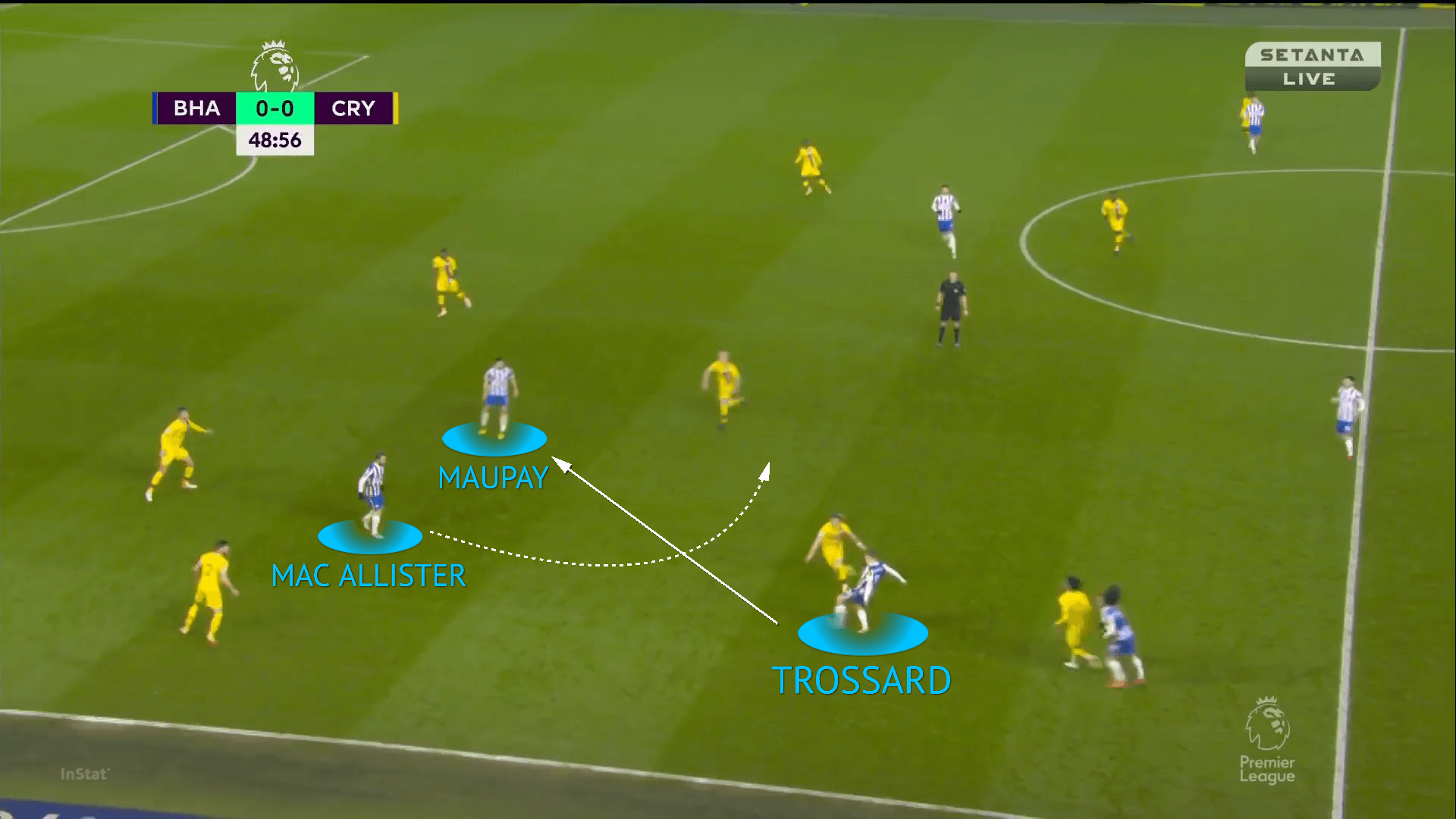 With Maupay now in possession, he draws Crystal Palace defenders, and they try to apply pressure and condense the space around, and because of this, create an open space within their back-line, for Jakub Moder. 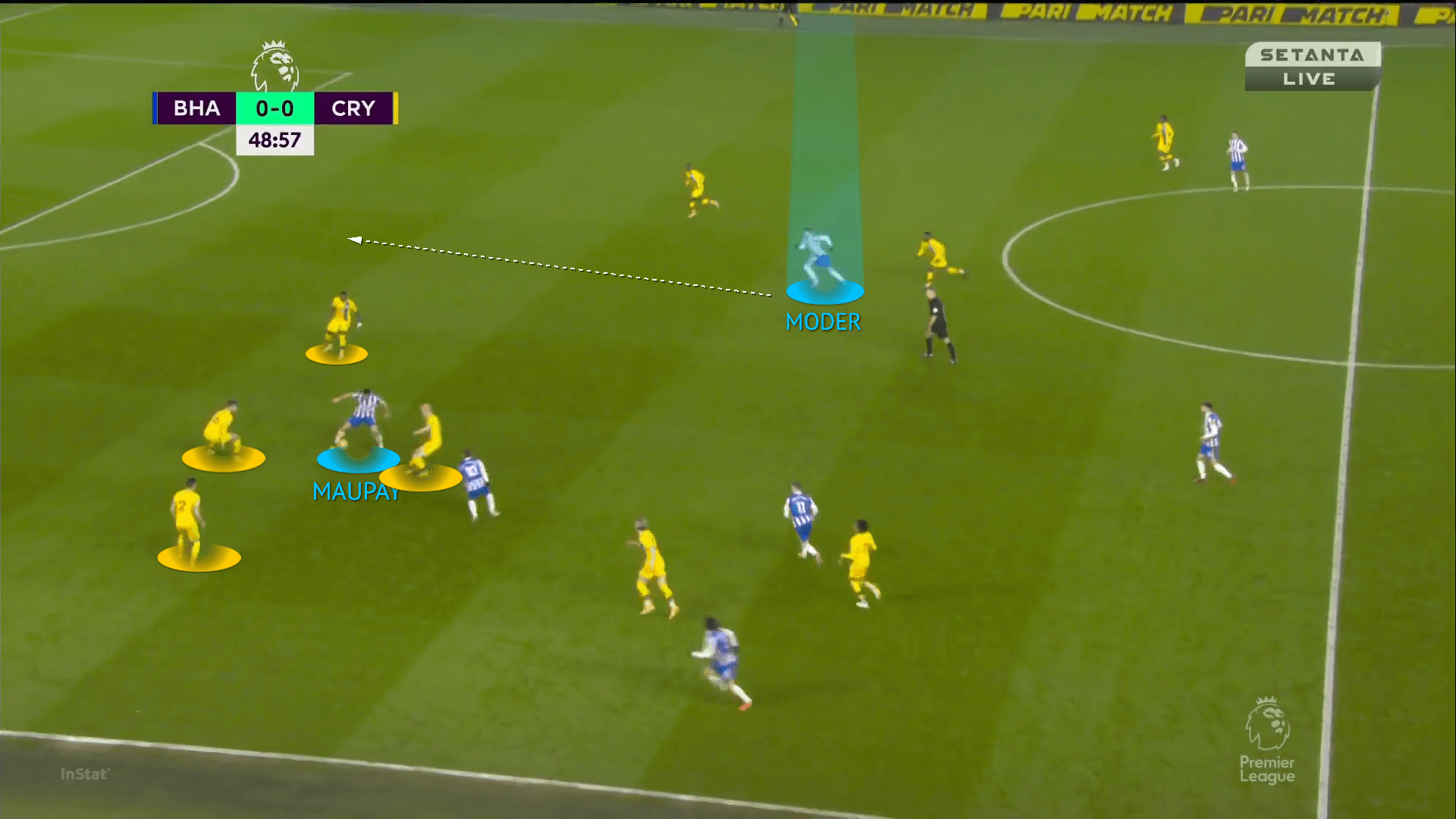 For large portions of this game, Brighton was in full control, while Palace failed to put their foot on the ball and make an imprint within this match. Patrick Vieira’s men were brave as they attempted to play during goal-kicks but were unsuccessful because of Brighton’s effective high press. During the first half, Palace’s attackers were limited, but certain sequences can be dissected which reveal some of Viera’s ideas.

Throughout, Michael Olise and Eberechi Eze provided the width for Crystal Palace, despite being inverted wingers. Both full-backs Joel Ward and Tyrick Mitchell would operate centrally and would make under-lapping runs within the half-spaces. The Palace’s full-backs made this run. Either Olise or Eze will open their body and cut inside, as space is created because of the supporting run. The away side’s wingers had wonderful moments, but they were too far between and did not occur as much as they would like. During the second half, Palace made a tactical change, replacing striker Odsonne Édouard with former Bundesliga striker Jean-Philippe Mateta, who was pivotal to their only goal of the game.

For Crystal Palace’s first goal, they could play out against Brighton’s press, and progress the ball down the right-wing, with Joel ward, who passes the ball to Conor Gallagher, who then completes a first-time pass to Olise. 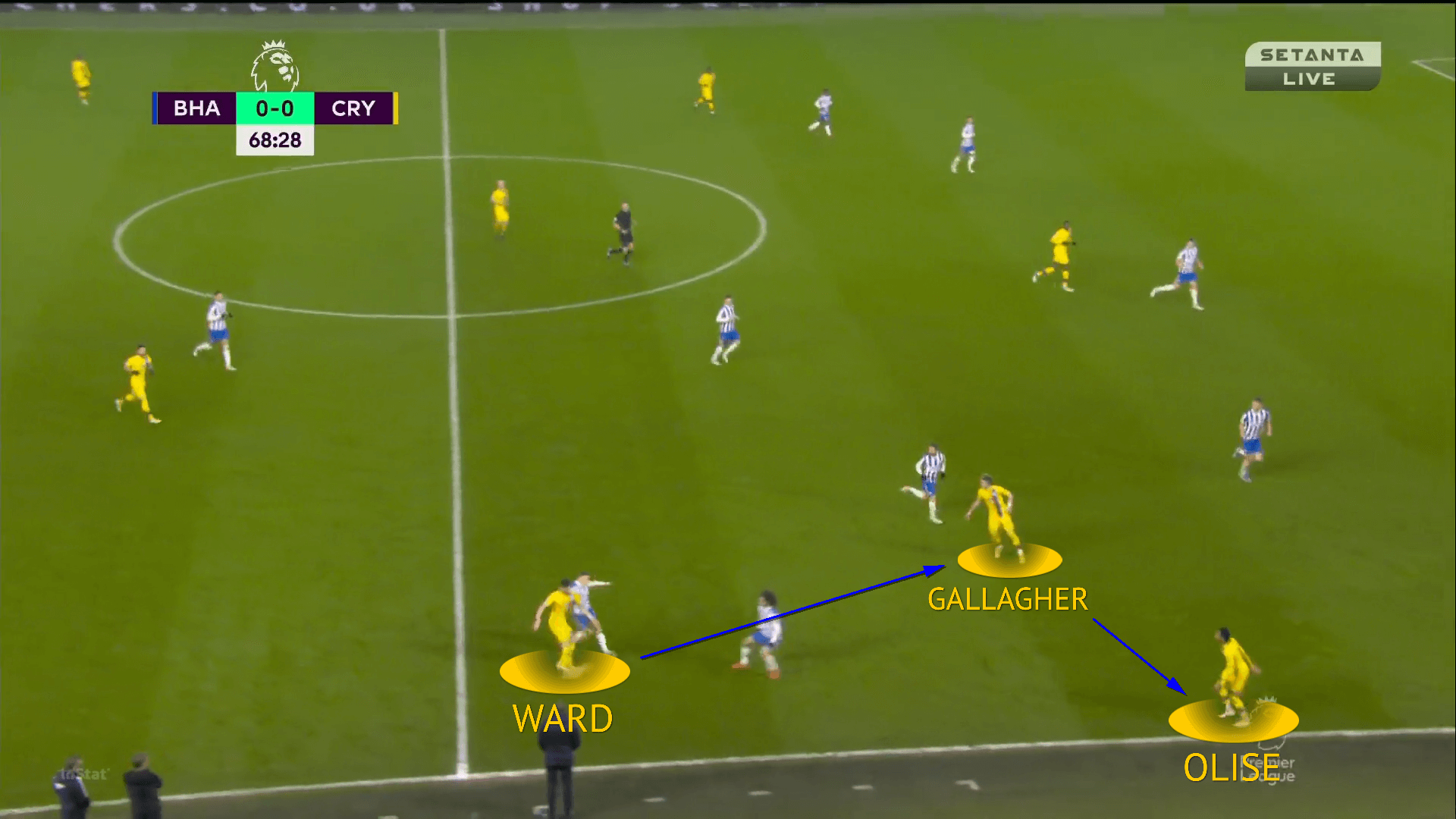 Olise then releases the ball back to Ward, making his under-lapping run, and quickly finds Mateta, who does well to hold up the play and plays the ball out wide. 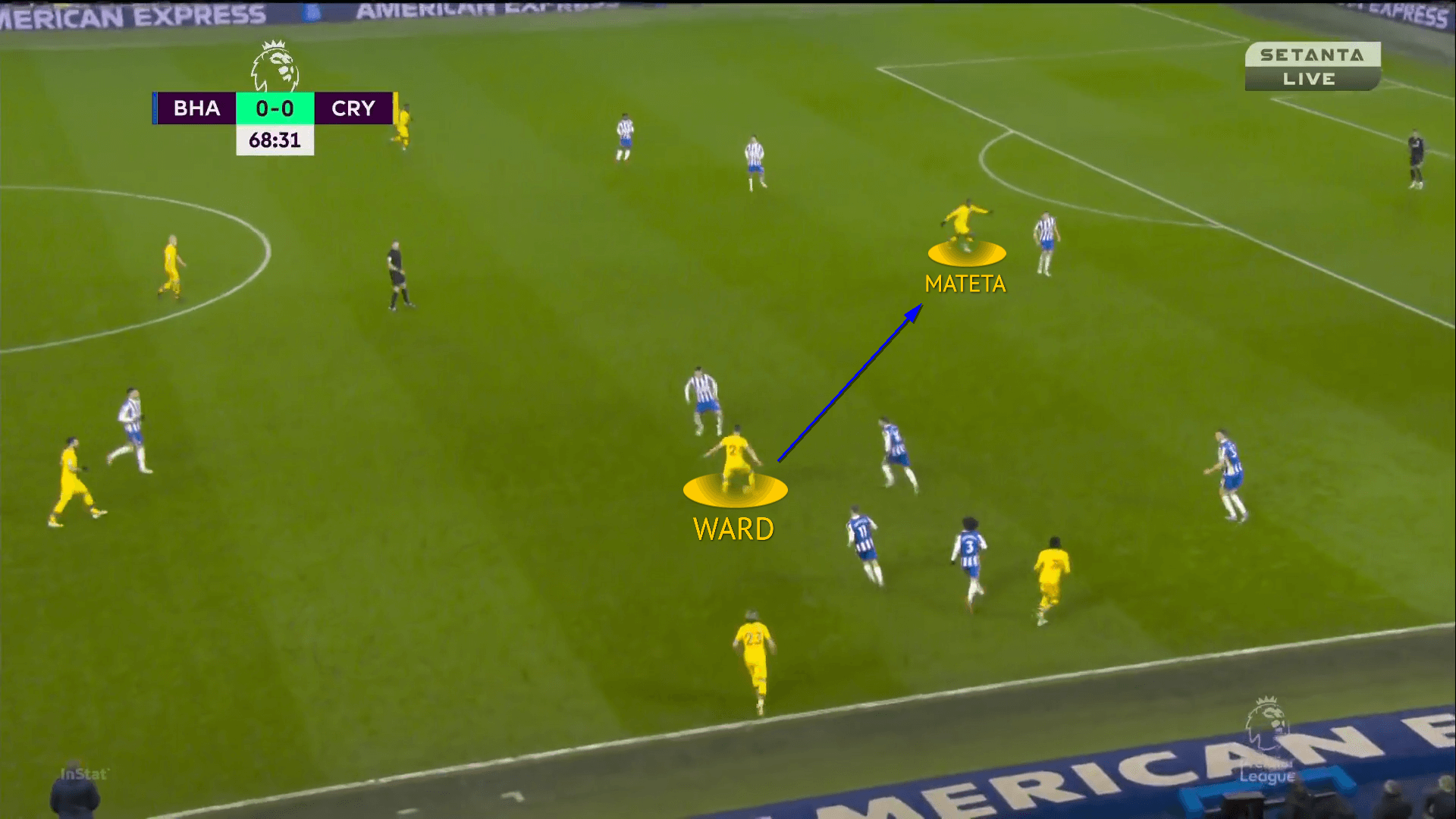 Now the ball is in the wide area, Crystal Palace creates a wide overload on the left side, which draws in Brighton, which leaves Conor Gallagher in space outside the box. 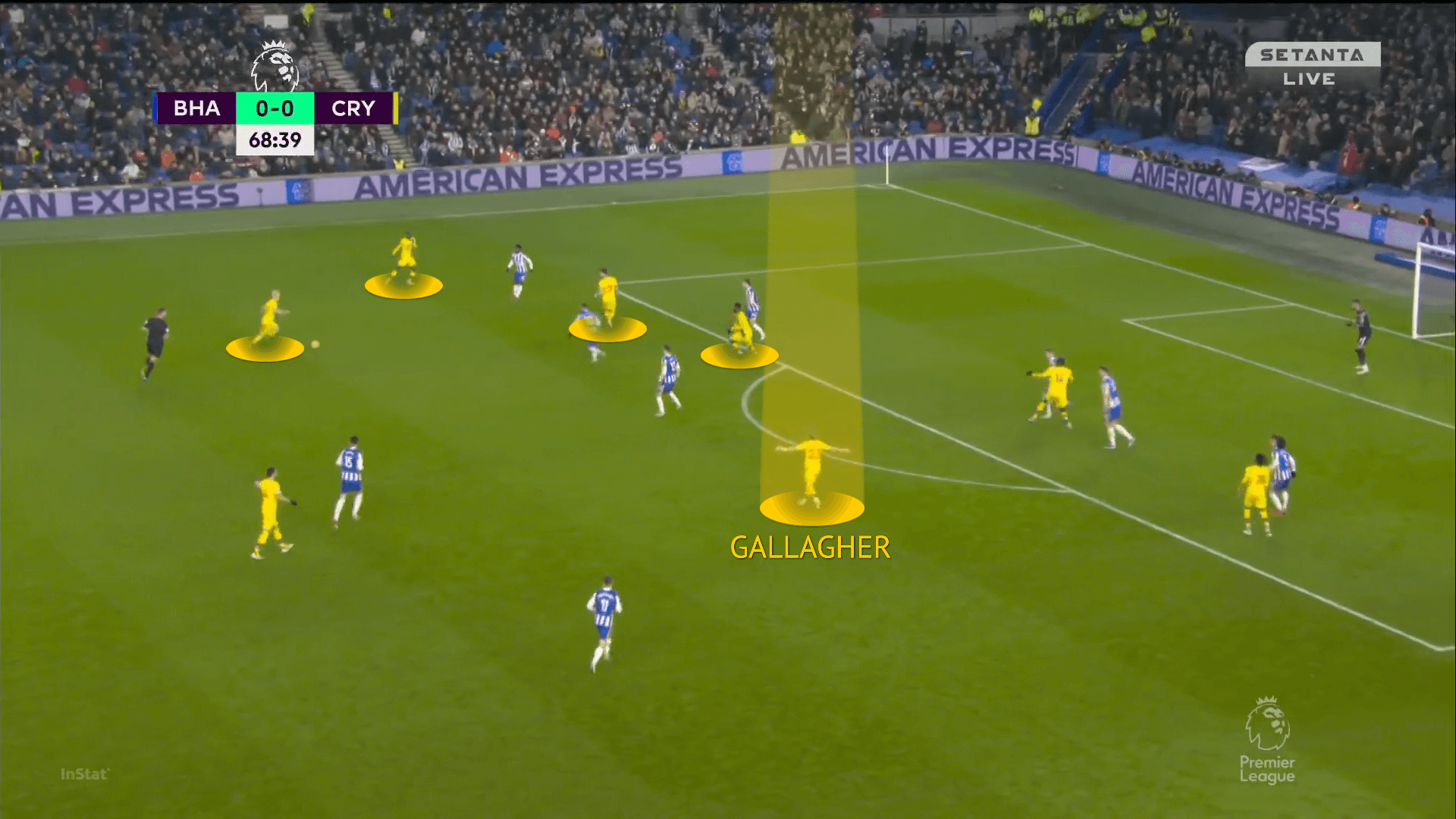 Palace managed to work the ball into the opposition box, and Conor Gallagher did well to ghost into the box unnoticed, without markers detecting him. From this position, he receives the cutback and scores the all-important goal.

Following Adam Lallana’s second-half injury, Graham Potter changed shape, rather than introducing a like-for-like change and continuing with the same tactical scheme. On came Tariq Lamptey, and with him came Brighton’s new formation, a 3-4-2-1, with Jakub Moder and Leandro Trossard, playing behind Neal Maupay. The three-man defence was quite effective, as Adam Webster moved into middle centre-back. As mentioned prior, Adam Webster showcased his long-range passing during the first half, but in the second half, progressive passing during the first phase of play. With the platform to play decisive yet shorter passes, and could find Jakub Molder in open space frequently; this space was because of the positioning of Tariq Lamptey. Previously mentioned, Crystal Palace’s low-block was very narrow, which affords space to Brighton’s full-backs. With Lamptey on the pitch and the initiation of wing-backs, Palace decided for their full-backs to position themselves slightly wider to nullify Lamptey and Marc Cucurella. With both full-backs occupied, Brighton’s dual 10s had room to play within the half-spaces and made good use in these zones. 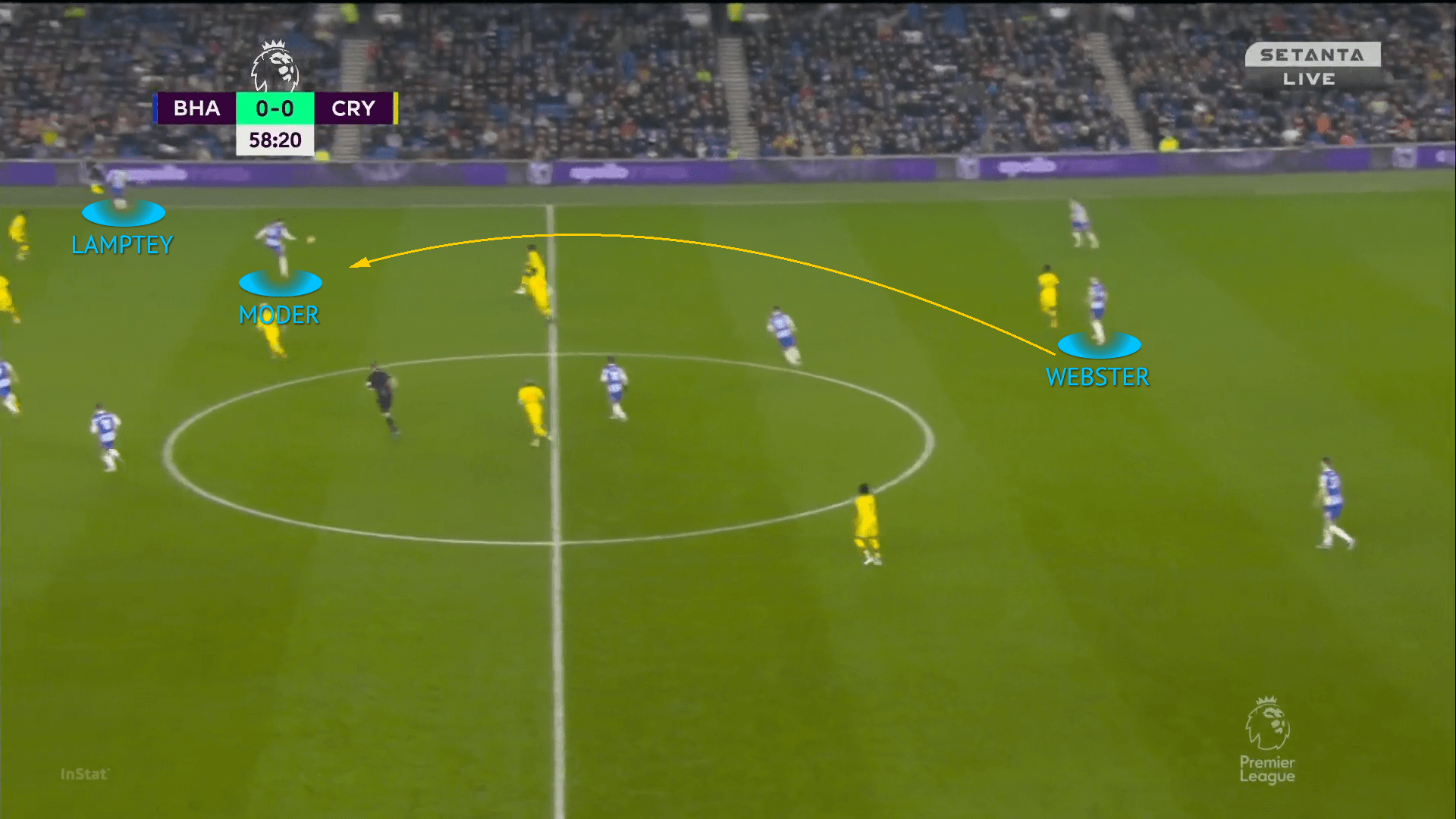 The Palace and Brighton rivalry may not get the rightful attention compared to others, but the managers of both teams will surely change this as their teams play with a nice brand of football. Graham Potter has showcased his coaching ability in both the Premier League and Championship, and Patrick Vieira excelling in the transition of Crystal Palace’s youth overhaul. With both coaches displaying wonderful accounts of themselves, this match-up becomes rather interesting. Brighton controlled the game and employed their game plan, but in usually Brighton style, they underperformed on their xG throughout. Crystal Palace broke the deadlock and locked to complete another snatch and grab like in the previous fixture between the two clubs, but through Brighton’s persistence, the equalizer came, which is what they deserve, at the very least.