Florian Grillitsch is a 26-year-old Austrian midfielder currently playing for Hoffenheim in the German Bundesliga. Grillitsch has been quietly receiving plaudits for his consistently excellent performances in the Hoffenheim midfield for some years now, however, he is beginning to spring into the spotlight given his contract is up at the end of the season.

Grillitsch has been a key part of a Hoffenheim side that has flown somewhat under the radar this season, and currently sit in the Champions League places in fourth position at the time of writing.

This tactical analysis and scout report will look to provide an analysis of some of Grillitsch’s key traits, whilst looking at how he fits in with Hoffenheim’s tactics.

Grillitsch’s main position is as a defensive midfielder. He has seen the most minutes in this position this season, having registered 780 minutes there for Hoffenheim so far. However, he has also been used as a centre-back with some frequency too, having played 561 minutes there too. His ability to read the game as well as he does, on top of his robust approach to defending and ball-playing quality, makes Grillitsch a player who can play at the back, particularly in a back three where he has more freedom to step forward., However, of course, these are the qualities so highly coveted in elite-level defensive midfielders.

We can see from looking at his heat map from this season that Grillitsch takes a deep central position and does plenty of his work from this area, and will venture just beyond the halfway line too but doesn’t have a high volume of work close or inside the opposition penalty area. 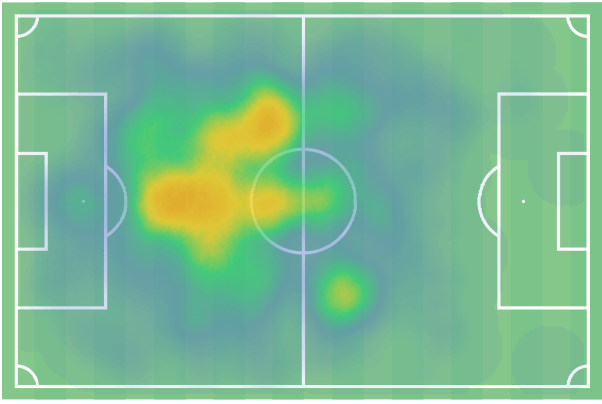 The following image provides some context to Grillitsch’s defensive output this Eason against the rest of the league’s defensive midfielders. We can see he ranks comfortably above average for both volume of defensive duels and defensive duel win percentage, whilst the size of his plot point indicates his 6.57 padj, interceptions is a quality volume as well. 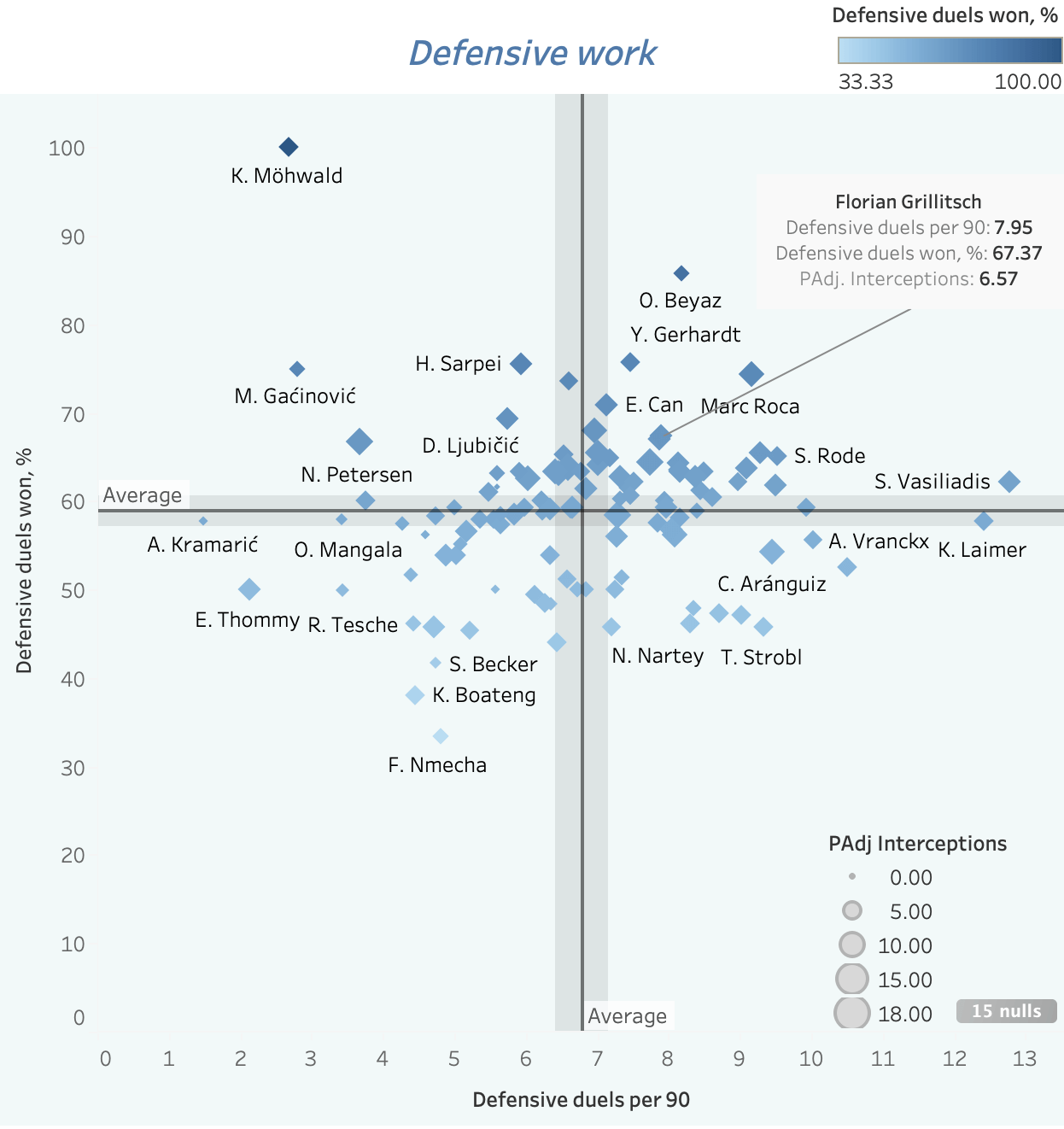 A key facet of Grillitsch’s game is his speed at recognising the opportunity to win the ball. Regardless of where he playing as a 6 or as a centre-back, he will quickly step forward to sweep up a loose ball from an initially more reserved, deeper position. He is quick over a short distance, and whilst he isn’t reckless (decelerating as he provides pressure if he sees he isn’t going to win the ball), he will nevertheless move quickly to make a firm challenge if he believes he has the opportunity to win possession. He is firm in these tackles, but fair, and shows excellent timing. Grillitsch is disciplined with his positioning, always shifting across the pitch to maintain an appropriate compactness with the midfielders either side of him, but he also pays attention to the gap between himself and his defence. We can see this in the image shown below, as Grillitsch shifts across, whilst scanning behind him to check the positioning of his defence and any opposition players. 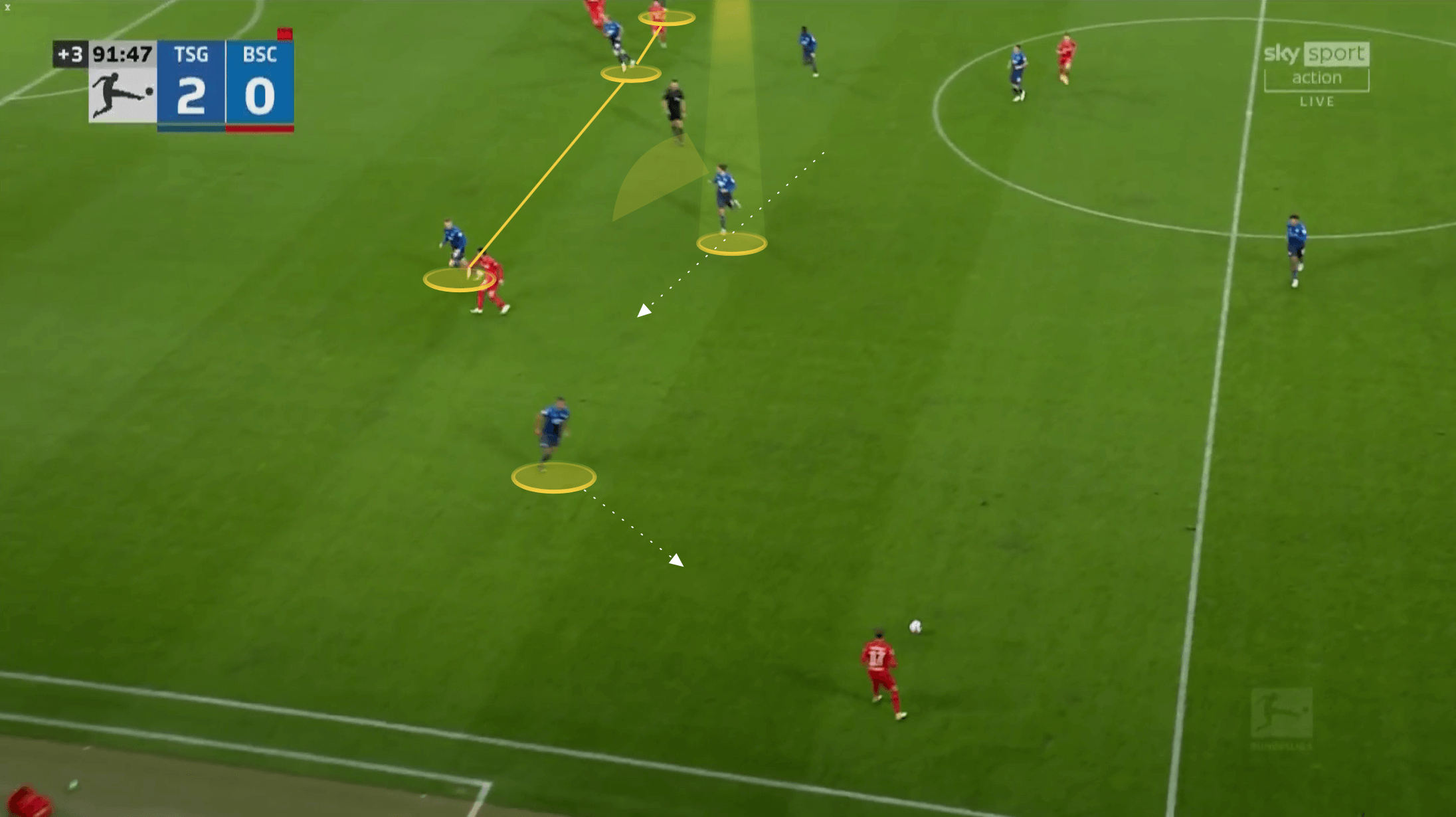 When the ball is out wide he will drop off appropriately to cover his winger as they step forward to engage the ball-carrier, and whilst he is covering this space he is nonetheless on the front foot, ready to step forward and press himself, if his winger is beaten. 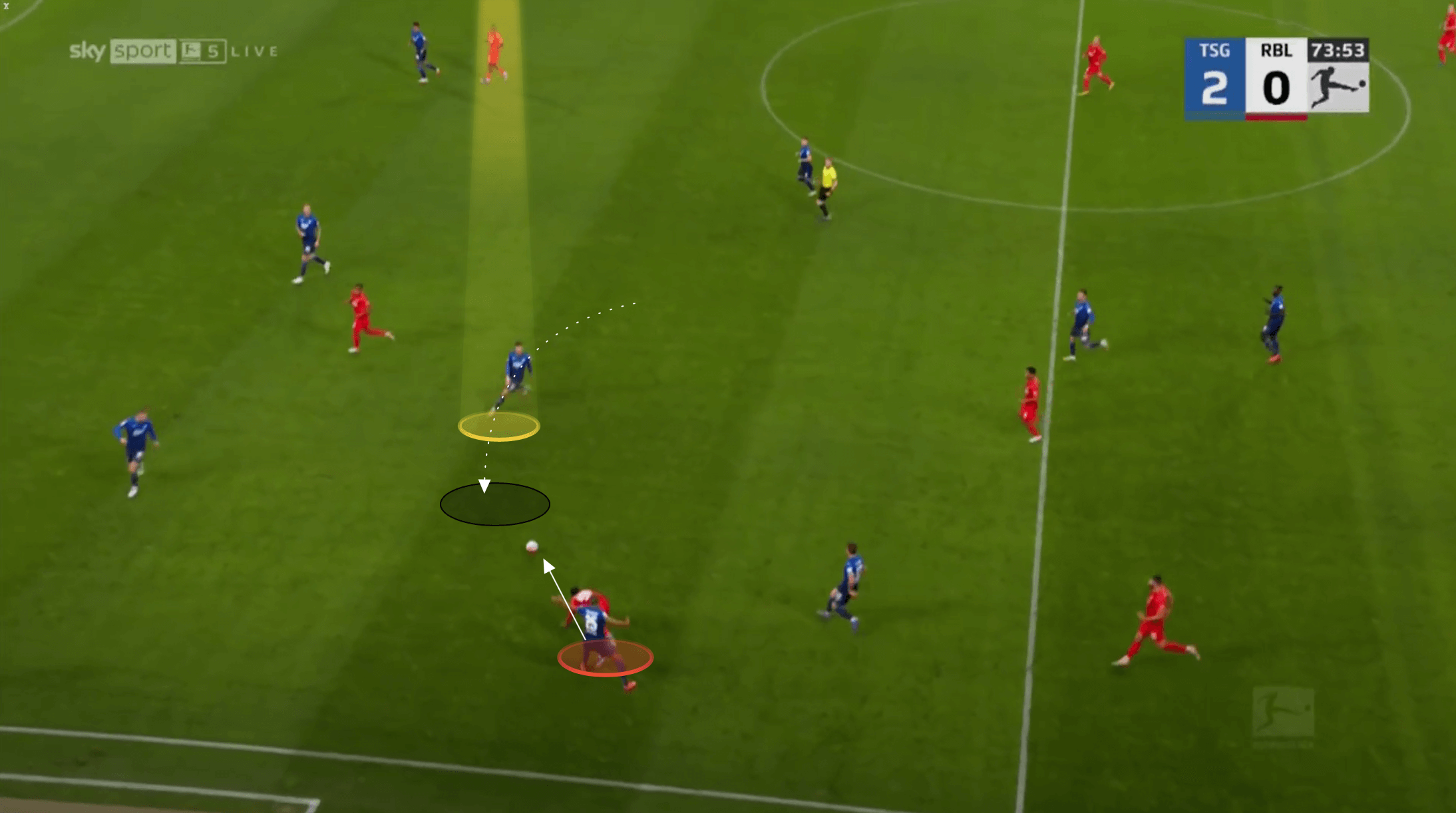 After winning the ball, Grillitsch’s initial instinct is to get his head up and look for the forward pass. He shows outstanding awareness to do this, but equally he values possession and isn’t the type of player to force a pass in this moment if it isn’t on. 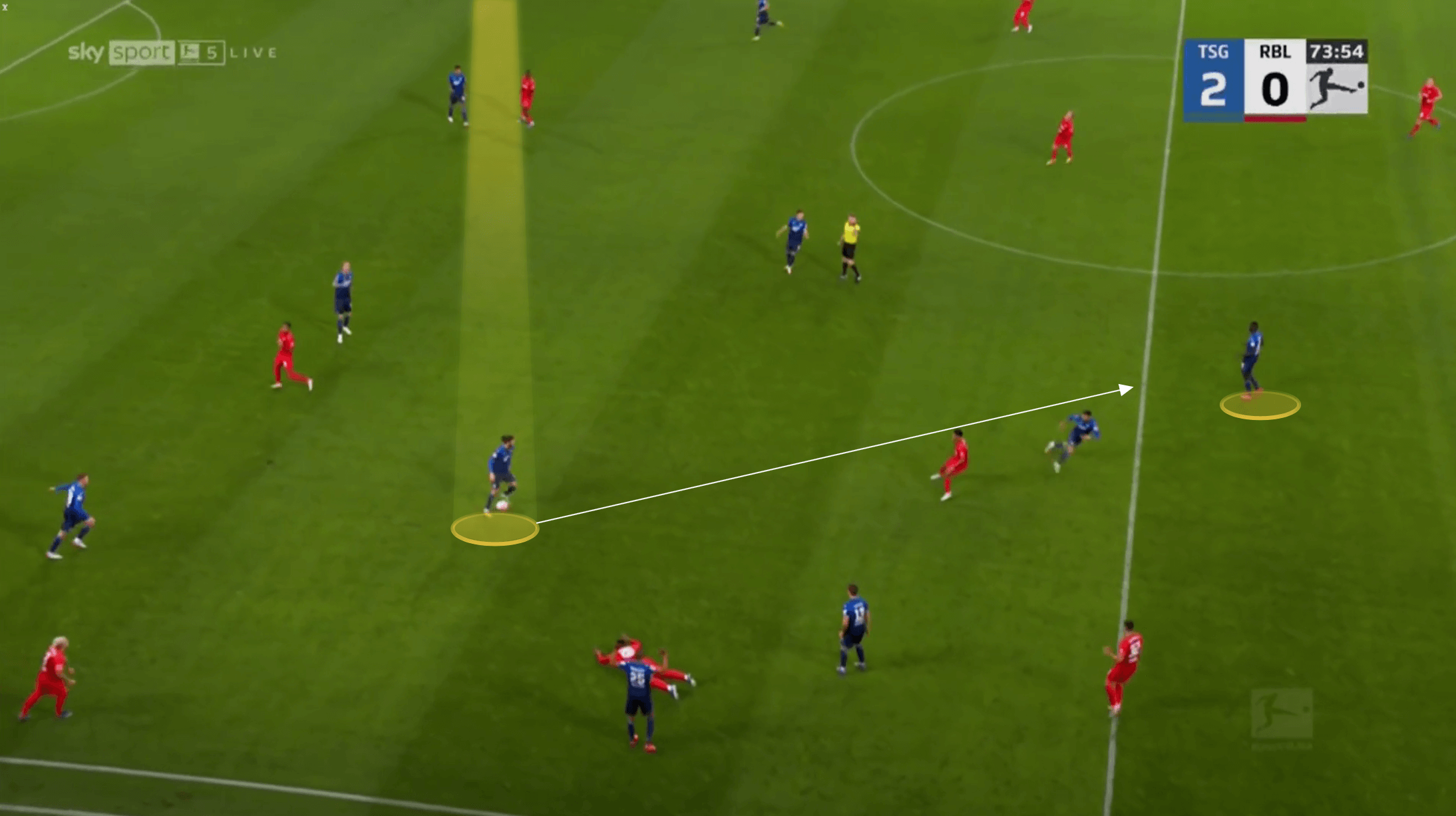 The bulk of Grillitsch’s work and influence on build-up play comes in that deeper, classic “6” position as indicated already in the heat map shown at the begging of this article.

Grillitsch is comfortable operating in this space. When his centre-backs have possession he offers an option consistently. He may look to receive on the half-turn but equally scans regularly and will close his body off if marked tightly. He may look to receive facing his own goal and bounce the ball back to engage the press, if the opposition are sitting off slightly. 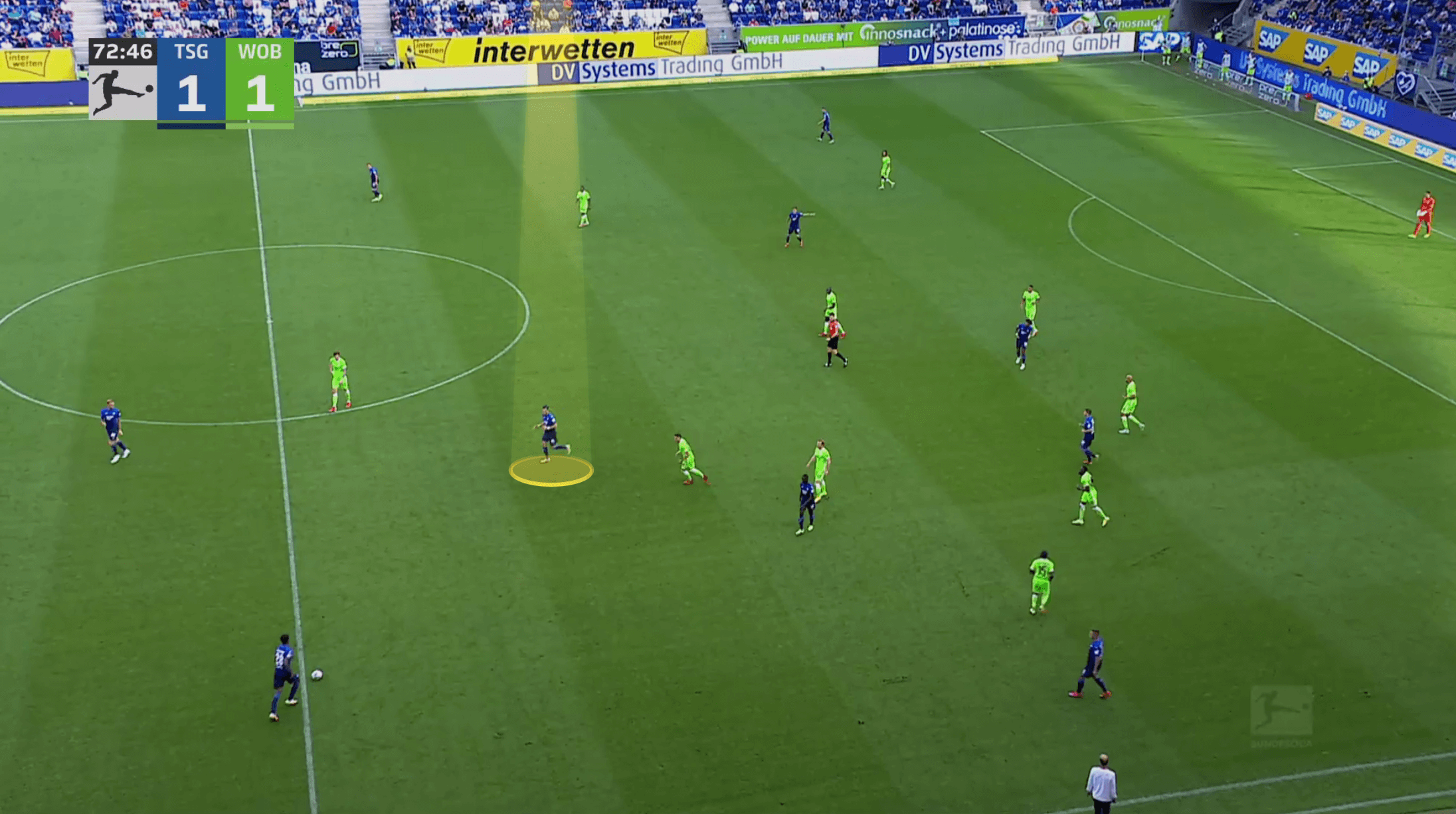 However, he is clever with his movement too. Grillitsch will create space centrally through his movement in this position. Whilst he may look to get on the ball he can also use this positioning to create the space for a far more advantageous line-breaking pass. We can see him looking to drag the opponent marking him closely in the following image through a diagonal movement away from the central channel. 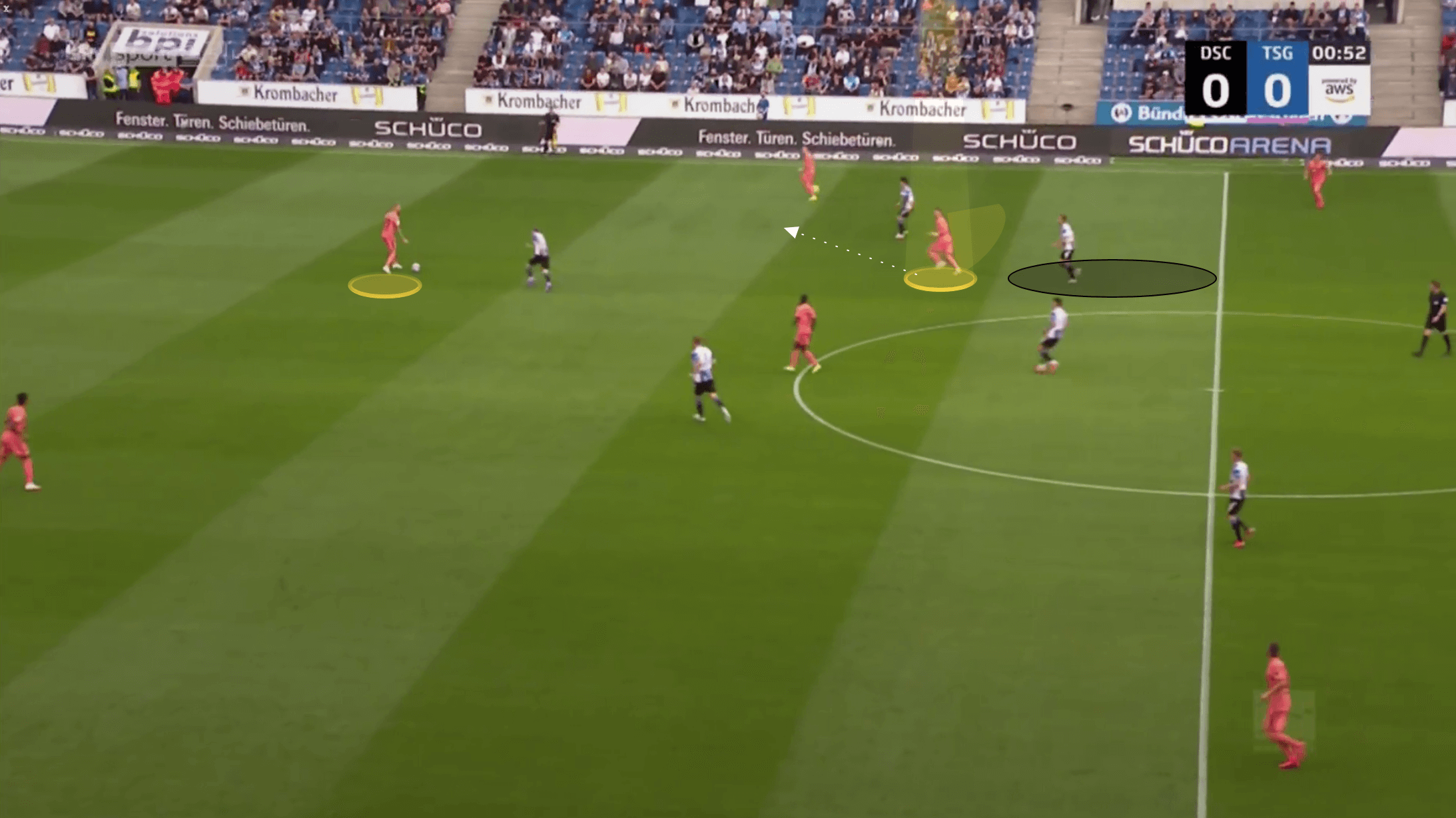 Grillitsch is very positive on the ball and the following graph highlights his quality of distribution. Grillitsch will often sit in a deeper position where he can launch long switches, diagonal balls over the top of the opposition full-back, or even more searching through passes for angled runs made in behind. The following two images highlight some of the quality Grillitsch possesses with these longer passes. He isn’t just making high percentage lateral switches of play.

He is a press-resistant midfielder and is comfortable under pressure, where he can still make defence-breaching passes with quality vision. 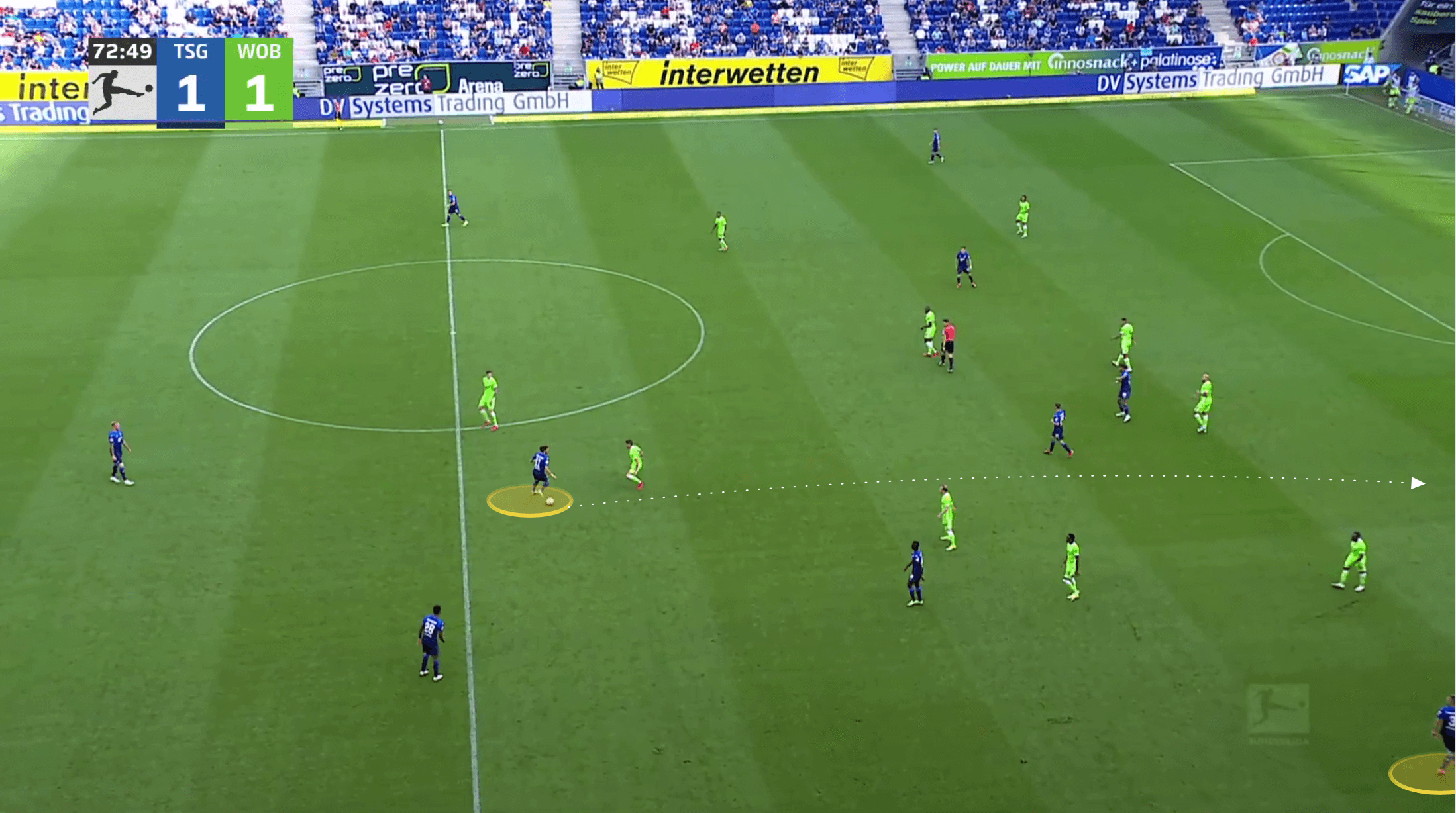 He enjoys anchoring possession from a deeper position though, and whilst he doesn’t always move the ball on at an overly quick tempo, he is nevertheless quick to recognise the chance to hit a more direct pass over the top of the opposition defence. 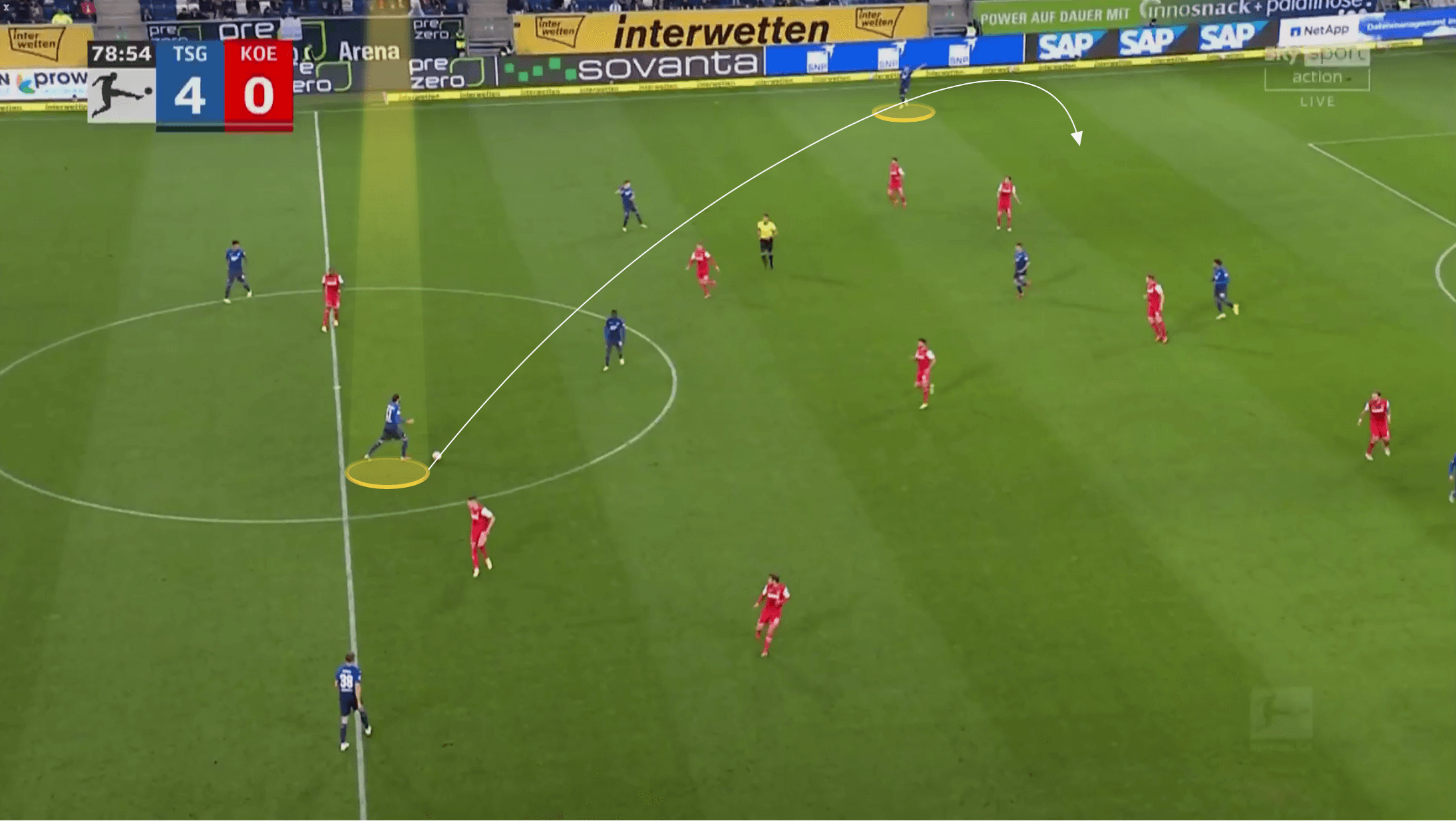 It will come as no surprise given the quality he possesses as a ball-player to see that Grillitsch is one of the leading ball progressing midfielders in the Bundesliga.

There is a lot of information in the following graph, but when viewed altogether we can see just how much of an outlier Grillitsch’s data as a ball progresser is.

Firstly we can see that his volume of progressive passes is well above the league average, and his 84.9% completion on these passes is outstanding, as indicated by the size of his plot point.

The only midfielders to also be making more progressive runs on top of more progressive passes are Kerem Demirbay, Joshua Kimmich, and Kevin Stoger. Grillitsch’s dribble completion is at a very high 69.2% completion, showing that he isn’t limited to just progressing the ball well through his passing but also through driving forward in possession. 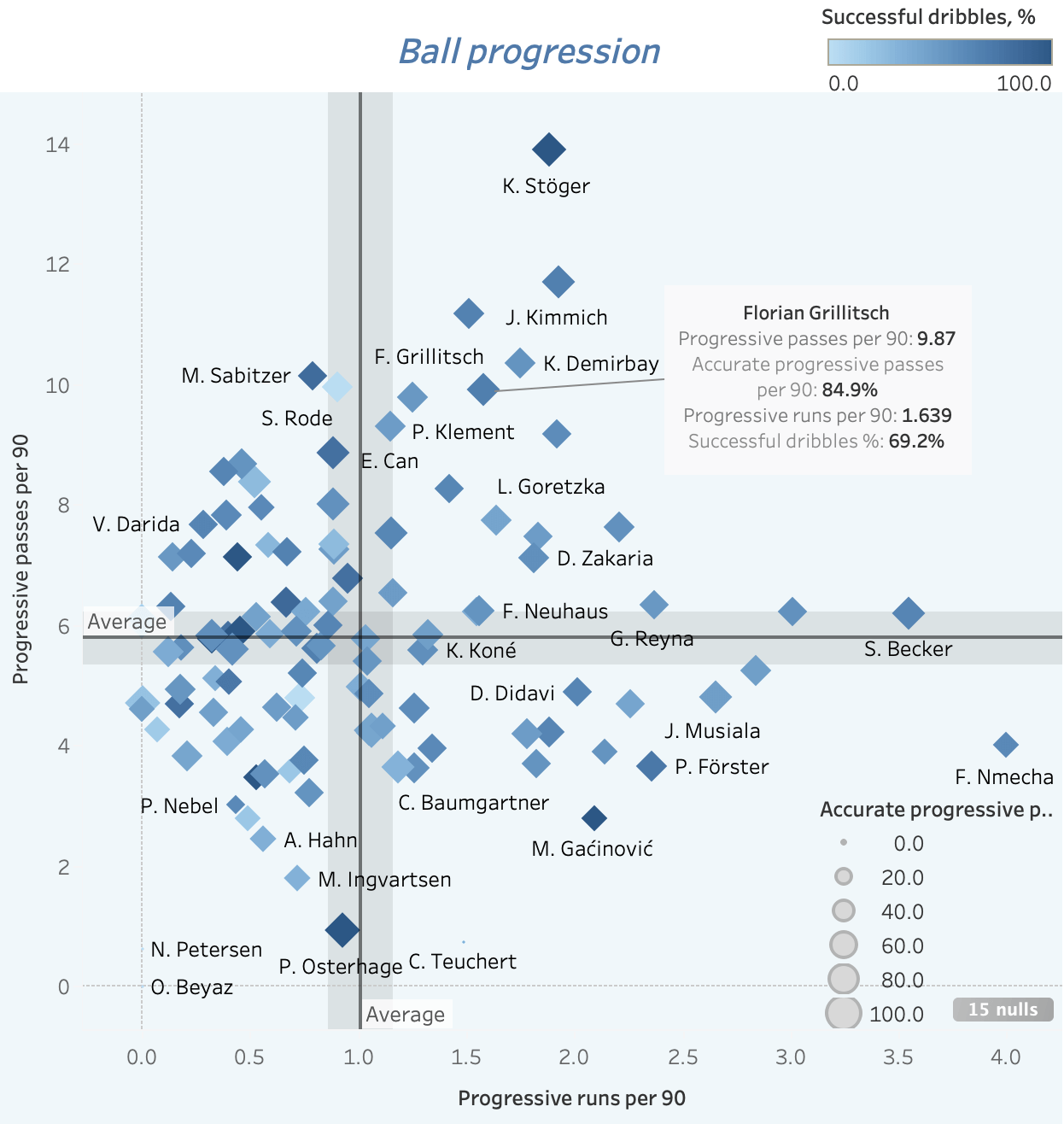 Grillitsch is well-rounded as a dribbler. Firstly, he is surprisingly skilful for a defensive midfielder. Having the ability to show innovation with dribbling and beating players with quick feet isn’t necessarily something characterised with players of Grillitsch’s ilk. Nevertheless he has this skill on top of a good change of pace. He also is able to quickly assess where space is when under pressure and can break through an opposition midfield if he senses the opportunity to. 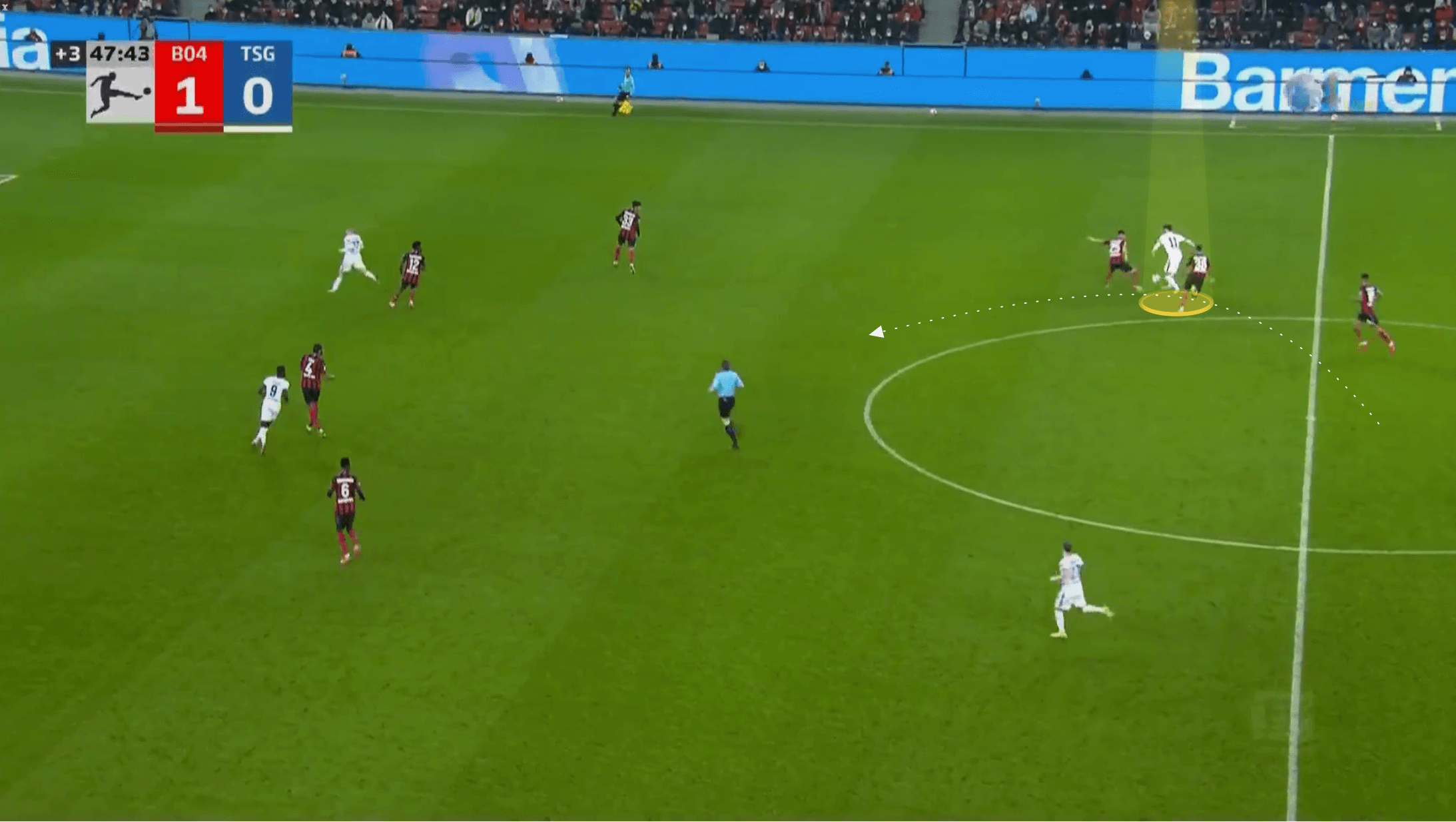 We can see this quality when under intense pressure in his own half. As already mentioned Grillitsch is highly press resistant and has no issue receiving the ball in a position where he may face this kind of pressure. He doesn’t have a particularly strong build but uses his body well too hield possession and can use a sharp turn away from a defender to not only shake off the pressure, but also progress the ball. 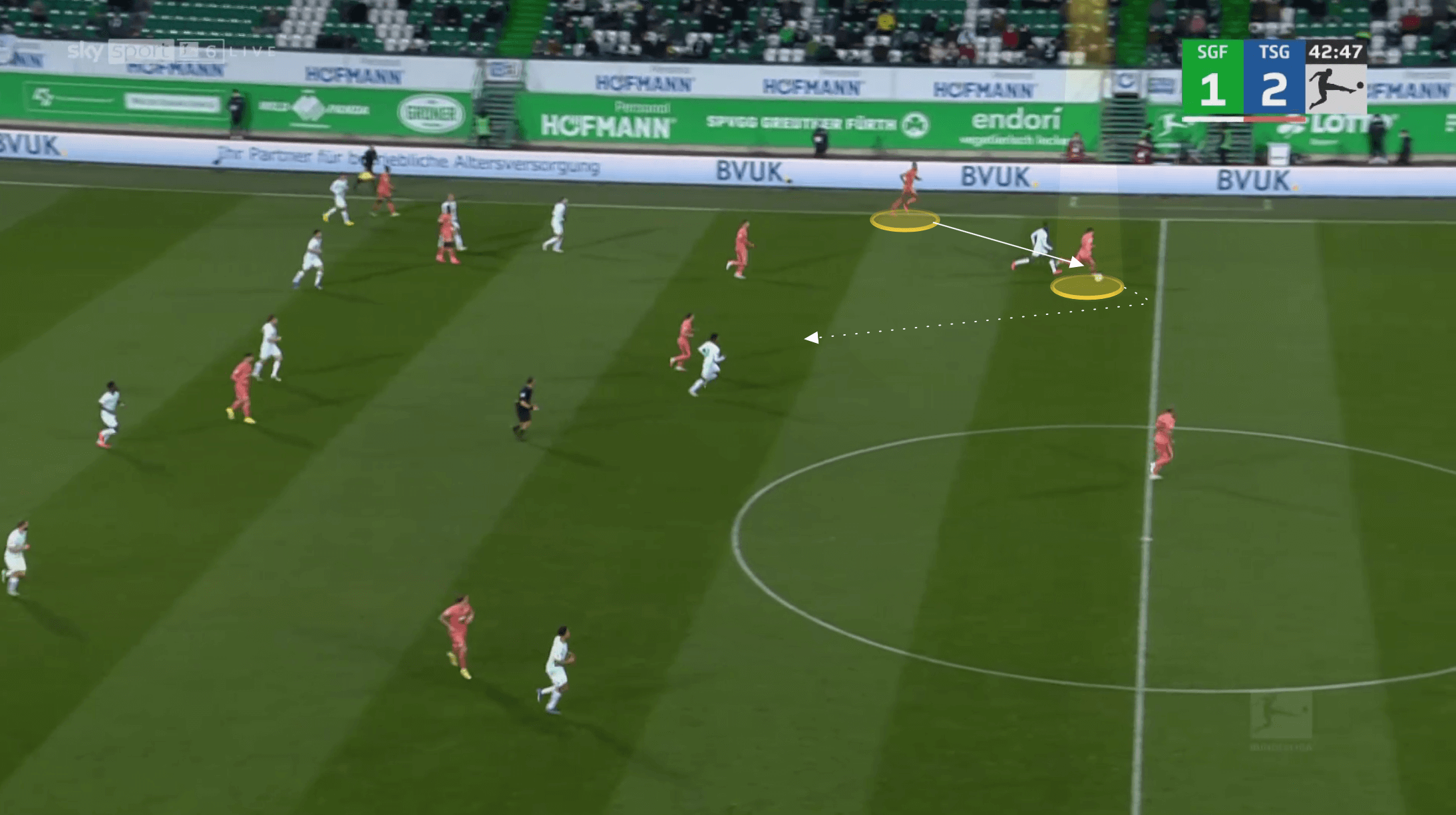 One area where Grillitsch is particularly potent at driving forward in possession is immediately upon attacking transition. We have already seen how quick he is to step forward and make an interception if he senses the opportunity to. 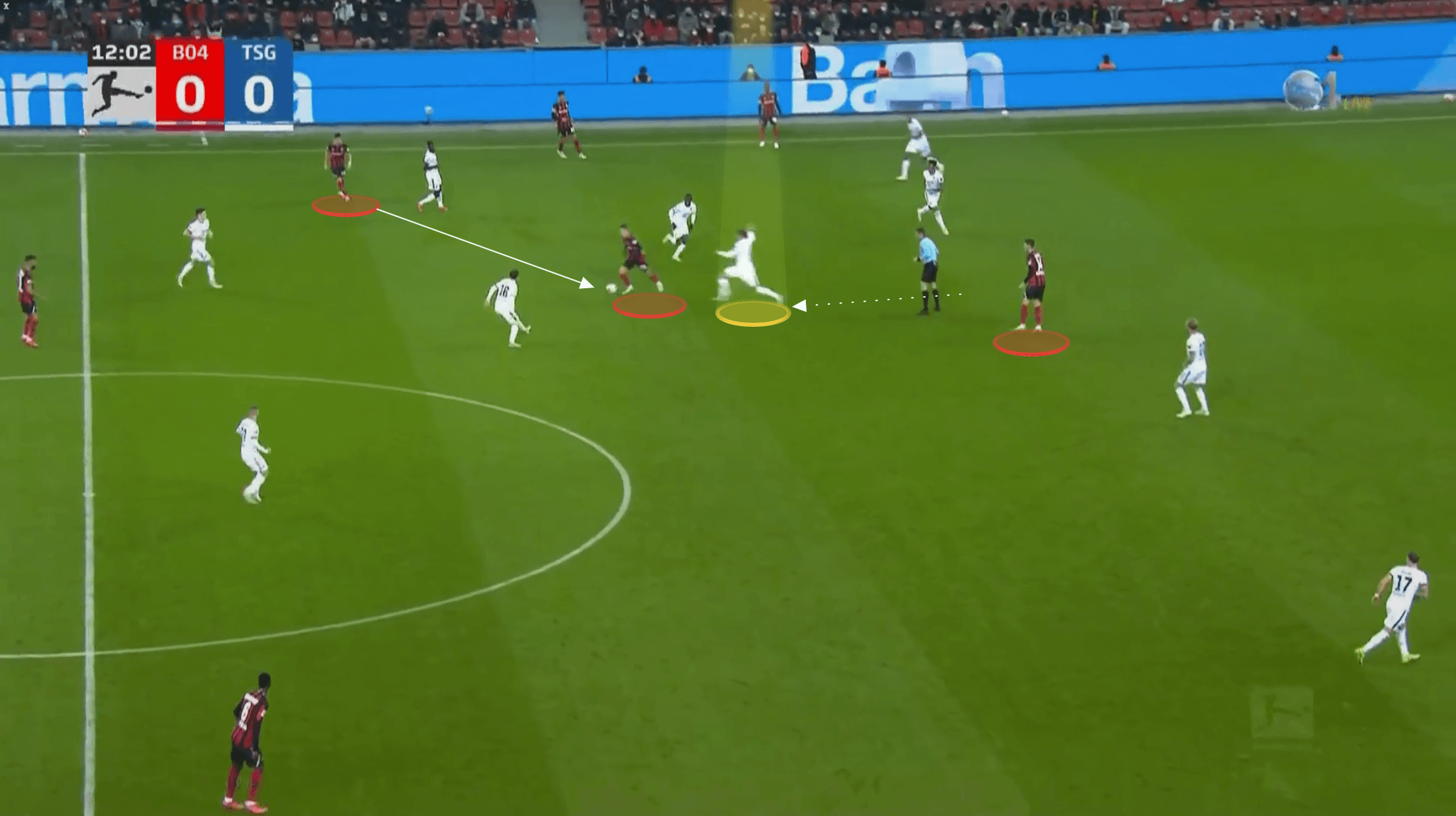 As soon as he wins possession in these positions he gets his head up, and of course if there is a more advantageous forward passing option on, he will take it. However, he makes his decision in this moment quickly, and will equally burst forward on the ball and drive into the space in front of him. He doesn’t overrun the ball, and often in these moments is simply looking to engage an opposition defender to move towards him before he offloads possession and is confident enough in himself to continue pushing forward to support that attack after such a pass. 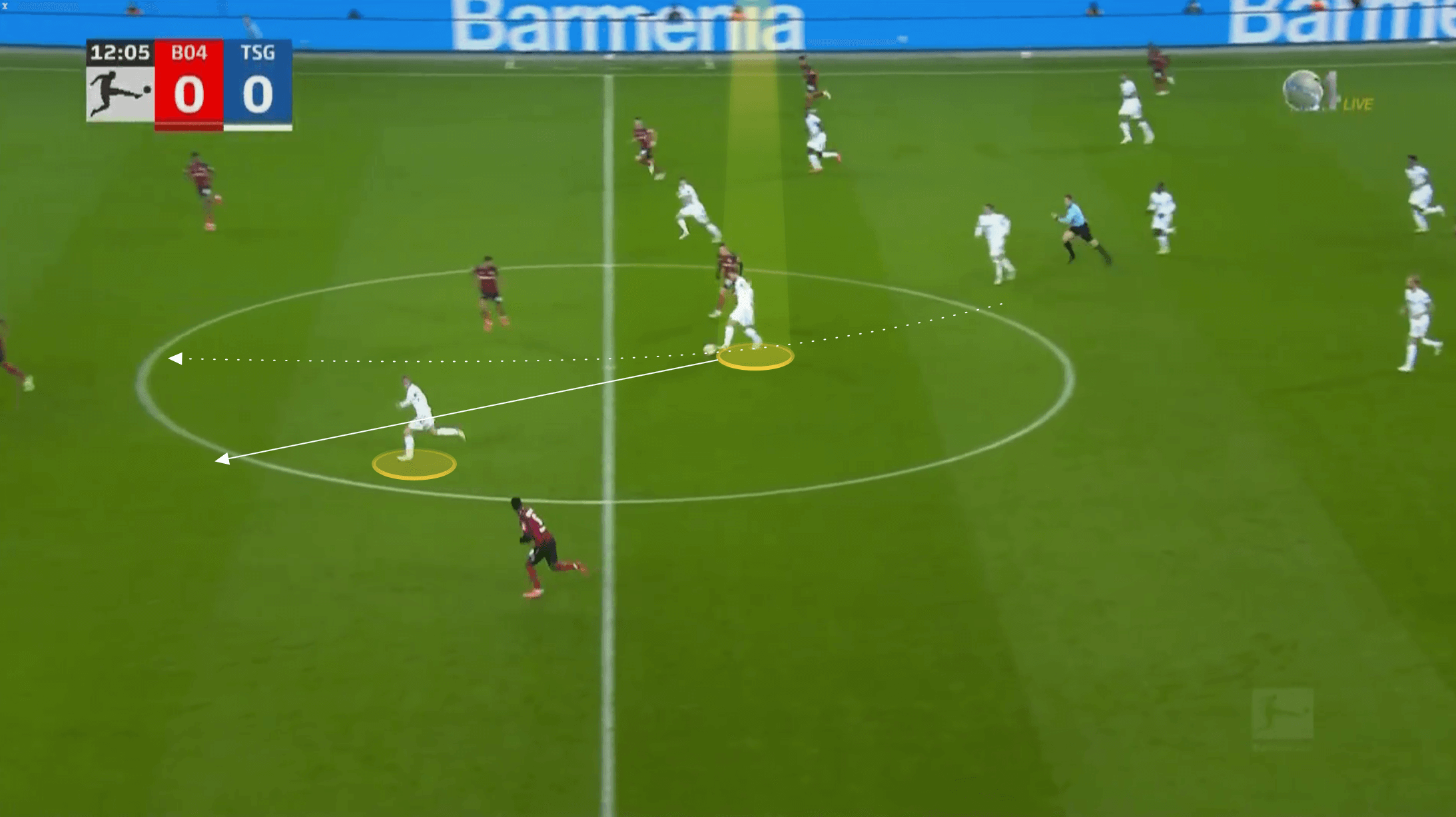 Grillitsch is a midfielder entering the prime years of his career, and it is likely he has held off from signing a new contract at Hoffenheim as he senses the chance to get the biggest contract of his career, and potentially at a top club playing in the Champions League. This may well see him remain in Germany but it wouldn’t be surprising to see him peak the interest of clubs in the Premier League and Serie A too. Roma have been heavily linked with the Austrian international. Jose Mourinho has been after a defensive midfielder since his move to Rome, and he may well get his man this summer.