Brentford 2021/22: How Brentford are using set-pieces to stay alive in the Premier League – tactical analysis

Brentford Football Club are in their first season in the Premier League after achieving promotion last season. Brentford have been transformed by their owner Matthew Bentham who has brought an innovative and data-driven approach to all aspects of the club and their approach is often referred to as ‘Moneyball’. This applies to all aspects of the football club from recruitment to their emphasis on set pieces.

Set-pieces have always been a significant part of the game of football however the understanding of their importance has been on the rise. More and more clubs are now employing a set-piece coach and Brentford themselves have had a history of set-piece coaches with Bernardo Cueva now in the role. Brentford and their sister club FC Midtjylland both believe in the importance of set pieces and providing innovative ideas to utilise this facet of the game. In addition, they believe in assigning the practice time to set pieces that they warrant in order to increase the teams understanding of them. Brentford has sought the use of set pieces as a way of creating goals and goal-scoring opportunities to help them this season, leading the league in XG from set-pieces and recording eight set-piece goals this season.

The following tactical analysis and set-piece analysis aims to understand how Brentford has brought an innovative and effective approach to their attacking set-pieces this season in the Premier League.

If you have managed to watch Brentford at some point this season you will have noticed the use of a long throw. With both Ethan Pinnock and Sorensen having the ability to throw the ball deep into the opposition box, this has led to Thomas Franks men using throw-ins in the opposition half to create goal-scoring opportunities. Long throws are rare with most teams electing to retain possession and the skill of a long throw isn’t often come by in players. With Brentford being very conscious of the importance of set pieces this may have been considered when recruiting both Sorensen and Pinnock.

With long throw-ins, very rarely is a goal scored of the first contact however the second contact is usually where either goals or shots occur.  This is due to the pace of the ball being much slower than a free kick or corner. The following two examples are where Brentford have scored from long throw’s this season. Long throws can be very hard to defend and can create chaos in the box and this is something Brentford do well. Below is a typical set-up for a long throw against Manchester United, both Jansson and Pinnock are set up ready to win the flick on with three players looking to make runs to attack the flick on if won. Brentford also likes to have three players outside the box, to win the ball if it leaves the box but also to nullify any counter if they occur.

The ball will always be travelling towards goal, so if there’s any minimal contact it will go in or on target and with Jansson and Pinnock in the keeper’s eye line they are looking to be awkward.

As the ball comes in Pinnock gets up to flick the ball on, with Jansson looking to get in the way of De Gea with the other Brentford players looking to attack the ball.

Harry Maguire manages to get a block on the flick on, but it falls back into the path of Pinnock who shoots across the goal and causes a scramble which Ivan Toney converts. Long throw-ins can be very hard to clear and often leads to a second or third phase attack.

Another example of an effective long throw came against Arsenal in the season opener.  The following image gives a different look at a long throw, as you can see there is a similar set-up to the last one, however, there is three players in that front post area and two looking to attack the ball. In addition, to their 3 men outside the box. 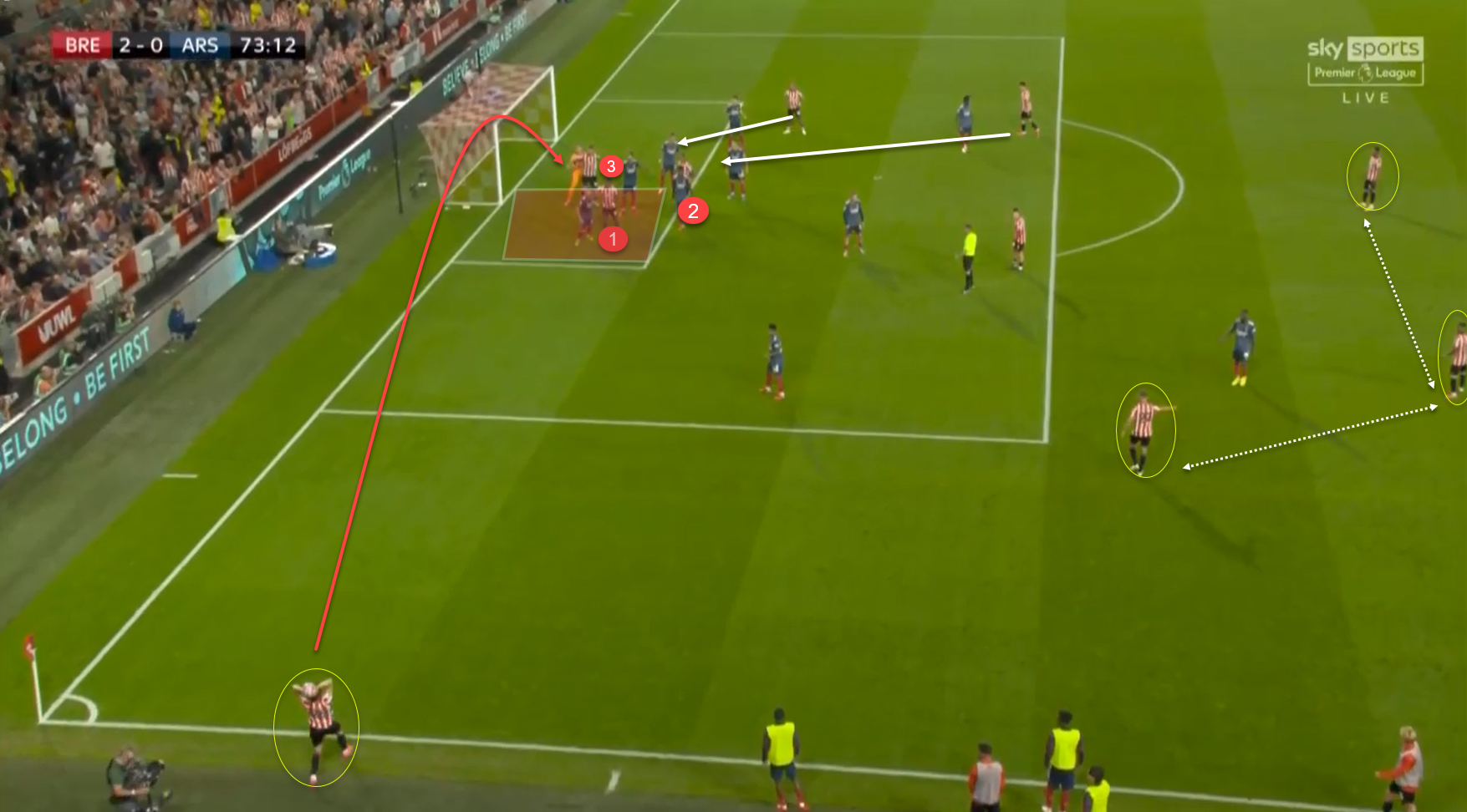 Again, the aim is to create chaos and obstruct the keeper with their biggest players and this is what they do. Jansson is marking and obstructing the keeper and Pinnock and Toney are looking to challenge the ball and stop the Arsenal defenders from clearing the ball. With Leno coming to punch the ball and missing the ball it bounces and allows the on running Christian Norgaard to head home.

As you can see both Norgaard and Mbeumo are there to attack the ball, showing this to a well-executed routine.

The long-throw used by Brentford has been a well-utilized tactic and has created many a goal-scoring opportunity for them this season. It is obviously a well-drilled and designed concept that gives them an advantage over their opponents.

Depending on the situation Brentford will give different looks with their free kicks, to exploit potential weaknesses within the opposition. With free-kicks from deeper areas it is very hard to score off the first contact especially with teams who play a high line, this means the second contact and having people attack the ball is imperative, similar to the players attacking the flick on with the long throw. This has led to Brentford using a split or spread out approach with their free kicks. The example below is against Norwich and shows their free-kick set up really well. You have two players at the top of the box, then three players more centrally than one coming back nearest to the taker. As we have seen before Brentford commit lots of bodies forward to set pieces and here, they have all 10 outfield players in the opposition final third. The ball is going to be played to the highlighted space for Pinnock to run onto and attack while the central players will look to attack the second ball and try to score.

As the ball goes to the area, the nearest Norwich man is blocked off, to create room for Pinnock. As he heads the ball you can see three Brentford players looking to attack the ball. Although this is unsuccessful it gives a look into how they like to attack Freekicks.

Creating space at the far post area is a theme of the Brentford free kicks and the next one is executed perfectly with a goal.  Some principals remain, everyone forward, three players ringing the box and an emphasis on attacking the deepest area of the defensive line. Wolves are using a zonal defensive line with them being outnumbered deep in the highlighted area. Brentford will exploit this.

Again, we see similar principles and an element innovative with the blocks. Creating a well thought out and executed set piece.

The most common form of set pieces are corners, and these too produce the most goals. As we have seen already Brentford execute their set pieces well with a well thought out strategy, corners are no different. They will change their focus depending on the opposition’s weaknesses which they will identify and look to exploit. However, the key principles remain the same.  They always like to have at least one player on or in and around the keeper, with three or four deeper in the box looking to make a run and attack the balls. They will often have a short option also. In this example against Manchester City, Brentford is looking to exploit weakness within the system. Manchester City defends the six-yard box with six defenders, so Brentford is going to keep the ball away from there and play the ball deeper. The principles here are the same, with two in and around the keeper and four deeper looking to make runs.

The key here is the movements of Wissa, Pinnock and Jansson. Wissa will run forward but no one will go with him as no one wants to come off their assignment.

As the ball comes in Pinnock and Jansson cross and the ball is floated deeper to Pinnock, to keep it away from the six-yard box. Pinnock gets above his man but doesn’t head towards the goal instead aims for Wissa who is unmarked.

Wissa gathers the ball, and his shot is cleared off the line. Although Pinnock chooses Wissa, if he heads towards the goal, he has four players who are looking to attack the second ball.

Again Brentford demonstrates some core principles, while always tailoring their set-pieces to exploit and opposition weakness as they did here.

Hopefully, this analysis demonstrates that Brentford has shown innovative and excellent set-pieces this season, using a set of core principles in each area but also and ability to tailor these to the weaknesses the opposition may show. They understand the importance of attacking and winning the second ball/ contact as this is where a lot of set-piece goals come from. They have also shown an ability to try different ideas and avoid the obvious and tried methods of delivering set-pieces. Finally, these set pieces are well drilled and executed, everyone understands their job and role with the delivery and timing of runs made to the highest standard, maybe the extra training time is paying off.