Sporting CP lifted the Taça de Portugal for the 17th time in dramatic fashion as they came out 5-4 winners on penalties after FC Porto rescued a 2-2 draw in the closing minutes of extra time.

It was a typically scrappy and competitive game as the players battled it out under the afternoon sun at the Jamor, Portugal’s national stadium on the outskirts of Lisbon.

However, among the chaos, there were tactical systems in play, as both managers tinkered with their systems in an attempt to gain the upper hand over their opponent.

This tactical analysis will examine how those systems matched up and what effect the manager’s changes had on the course of the game. 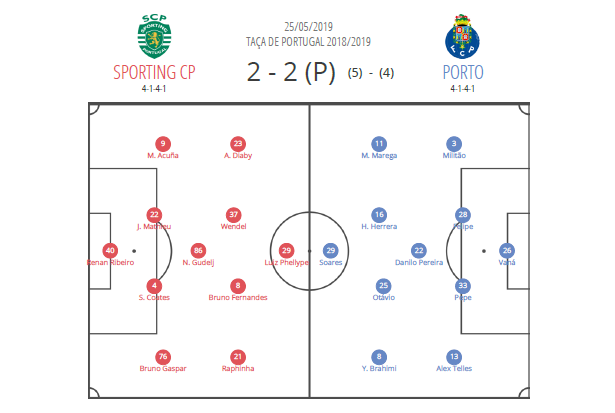 Sporting manager Marcel Keizer set his side out in his usual 4-3-3 formation. Star striker Bas Dost started on the bench as Luiz Phellype kept his place up front following an impressive run in the team during Dost’s injury absence in the latter part of the season.

Bruno Gaspar came in at right-back in place of Stefan Ristovski, who was serving the second of a two-game suspension.

Sérgio Conceição decided to send his Porto side out in a matching 4-3-3 shape, with winger Yacine Brahimi joining strikers Soares and Marega in a front three. Danilo would sit as the deeper midfielder with Otávio and Herrera lining up either side of him.

Real Madrid-bound defender Éder Militão started at right-back at the expense of Wilson Manafá, as Pepe partnered Felipe in the centre of the defence.

It was clear from the opening minutes of the game that Sporting intended to press Porto high up the pitch and set a high tempo from the offset.

In order to do this, Bruno Fernandes often advanced high up the pitch so that Sporting could press Porto’s back four man-to-man as can be seen in the image below.

This contributed to making it a scrappy game as Porto were often forced to go long, which left both teams fighting it out to win the second ball. This suited Sporting as it meant they could disrupt Porto’s possession game.

Both sides target the same flank

As is evident from the graphic above, much of the play was focused on one side of the pitch. In Porto’s case, this was in large part due to Moussa Marega’s positioning on the right-hand side of Porto’s attack. The Mali forward acts as the side’s main target man so it is only natural for much of their play to be directed towards him, especially considering Porto found themselves under pressure at the back and needed to find the striker to relieve the pressure.

Sporting on the other hand mainly attacked down their left. This was also due to the personnel involved, as left-back Marcos Acuña acts as one of their main attacking threats. The Argentinian, who has played most of his career on the wing, likes to play close to the touchline and this caused problems for Porto.

As can be seen in the image below, Porto’s Éder Militão moved out to the touchline to close down Acuña and this created an alarming gap between the full-back and centre-back, Felipe.

In this instance, Abdoulay Diaby managed to exploit this gap, using his pace to break free of Danilo, who had spotted the danger but couldn’t keep up with the Mali forward.

Porto got away with it on this occasion as Diaby’s cut back cross was skewed wide by the onrushing Bruno Fernandes. They weren’t so lucky the next time, however, as a similar move resulted in Bruno Fernandes equalising for Sporting just five minutes after Porto had taken the lead through Tiquinho Soares.

In this move, pictured in the images below, it was midfielder Gudelj who managed to play in Acuña into space in the gap between full-back and centre-back. But in this case, Porto’s nearest midfielder Héctor Herrera was attracted to the ball and failed to make the run back to track Acuña, who was allowed time and space to set up Bruno Fernandes for Sporting’s first goal of the game. 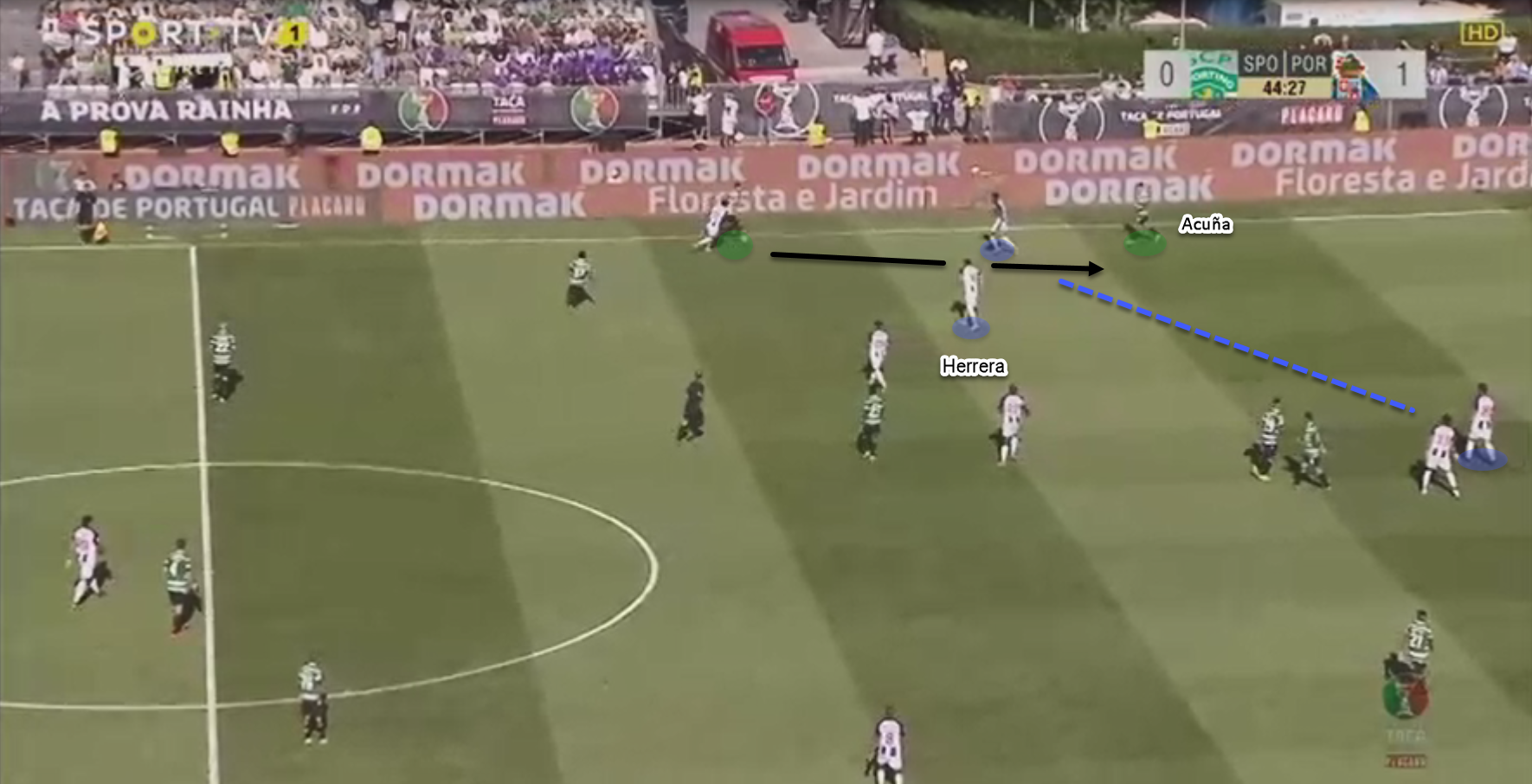 After the break, it became apparent that Porto had switched into a 4-4-2 shape, with Brahimi and Otávio manning the flanks in an attempt to stretch Sporting’s defence.

Porto were now attempting to get the ball forward quicker and force one-on-one situations with the Sporting defenders. In the image below, Brahimi is played in on the left-hand side where he was free to take on Sporting right back Bruno Gaspar and eventually managed to make a cross into the box. 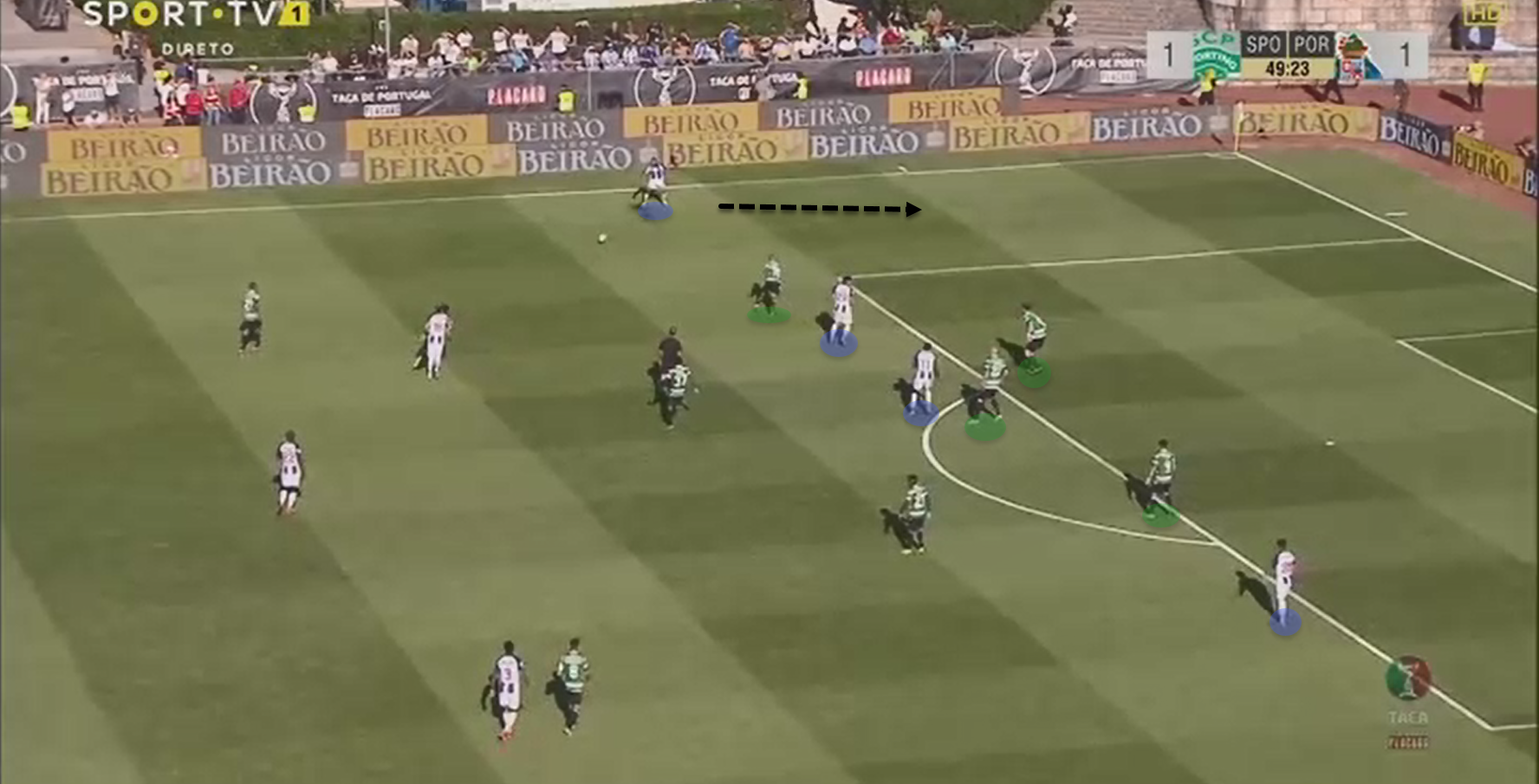 We can also see from this image that Porto’s front four (the two strikers and two wingers) were posing a greater threat to Sporting’s back four as they matched them man for man.

In the 77th minute, Marcel Keizer brought on fellow Dutchman Bas Dost, who was to partner Phellype up front as Sporting switched to a 3-5-2 formation, as in the image below. Mathieu and Coates were joined in defence by ex-Liverpool defender Ilori, who had come on as an earlier substitute for Gaspar.

On the left Marcos Acuña pushed up to play as a wing-back like you might expect but on the right, Keizer opted to give this added defensive responsibility to pacey winger Raphinha. This is not a natural role for Raphinha, but he has filled in in this way before, notably in the second leg of Sporting’s semi-final win over rivals Benfica.

The switch seemed to pay off though, as we can see in the next image. Here, centre-back Ilori is able to come wide and engage Brahimi, safe in the knowledge that Raphinha has taken it upon himself to track the midfielder’s run. It was clear that with an extra man in defence, it would be more difficult for Porto’s front four to stretch the Sporting back line. 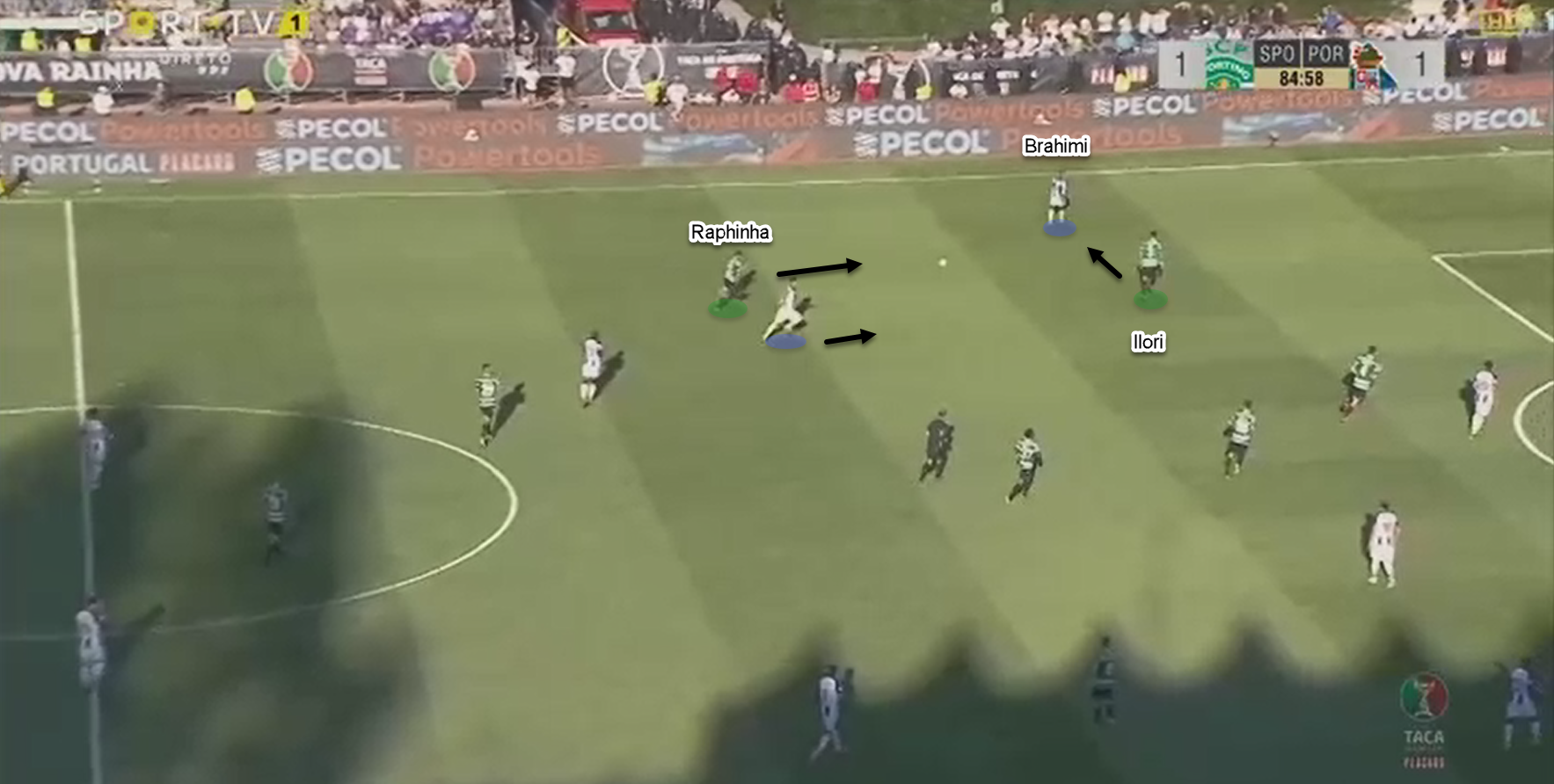 On more than one occasion Raphinha had to make full use of his pace and stamina to rescue Sporting when sprinting back to defend. In this next image, Porto’s striker Soares is tussling with Ilori, leaving a gap for Brahimi to attack down Sporting’s right-hand side.

As Héctor Herrera chips the ball into Brahimi’s path, Raphinha desperately sprints back to intercept him and, as you can see in the image below, he manages to do just that.

It was a risky move for Keizer to give so much defensive responsibility to a player who isn’t used to it. But Raphinha got back and defended diligently, as well as posing a threat offensively on the counter-attack.

The substitution to bring on Bas Dost also paid off, as the Dutchman put Lisbon side ahead after a cross deflected off Porto centre back Felipe and fell into his path in extra time.

The statistics leave no doubt as to which side threatened more over the course of the game. Porto had 26 shots (10 on target) to Sporting’s 11 (three on target) and will feel hard done by in losing a game in which they must have felt they dominated.

Despite clinching an equaliser right at the death, luck was not on Porto’s side as they crashed out on penalties to Sporting in a repeat of the Taça da Liga final back in January 2019.

Sporting certainly rode their luck at times and can consider themselves fortunate victors but credit is due to Marcel Keizer and his side for how they resolutely weathered the storm and came up with ways to frustrate a strong Porto side.

Perhaps things would have panned out differently if Porto had gone with their more comfortable 4-4-2 shape from the start, as they certainly seemed to cause Sporting more problems in this system.

In any case, Conceição and his team will have to put this down to experience and now start looking ahead to the 2019/20 season where they will once more compete with Benfica and Sporting in Portugal’s three domestic competitions.