Wednesday night will be the first London derby in a European final. Chelsea and Arsenal will both travel just under 2,500 miles to Baku in the hunt for Europa League glory.

Chelsea have already won the competition back in 2013 under Rafael Benítez and have already gained qualification for next year’s Champions League.

However, the pressure is on for Unai Emery’s Arsenal who are yet to win a European trophy and with the Gunners only managing a fifth-place finish in the Premier League, defeat in Baku will mean no Champions League football next season and a return to Thursday night football.

In this tactical analysis, we will look at how the Europa League could be won. 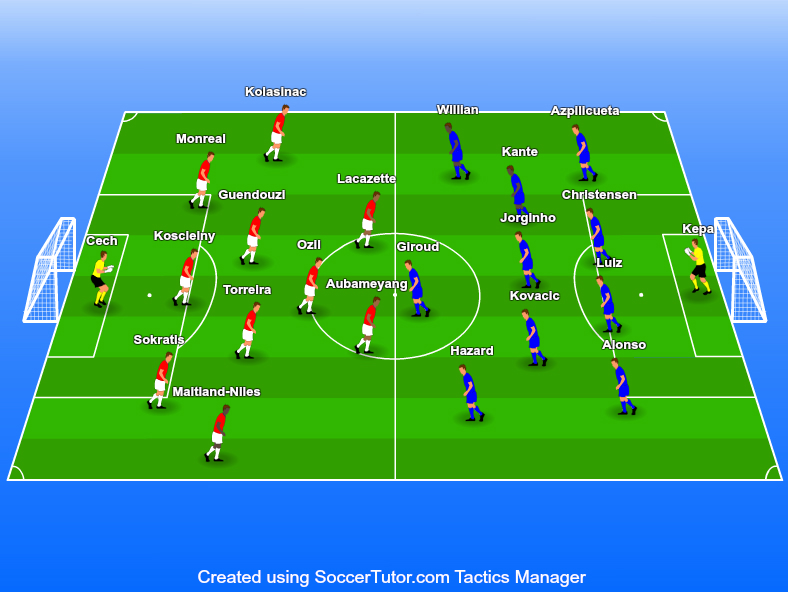 In the Europa League this season, Emery has opted to play with a 3-5-2 formation. However, playing against English opponents don’t be surprised to see him swap to a back four in which he has done in the league this season. Petr Čech has been the choice in European competition for Emery this campaign, however, Bernd Leno may be selected for the final. Emery likes to be solid in midfield and have two central midfielders.

This could be Lucas Torreira and Mattéo Guendouzi who have both been spectacular in their debut seasons at the Emirates, but Granit Xhaka could also play a part. It is almost certain that Emery will play with a front two which will most properly be Alexander Lacazette and Pierre Emerick Aubameyang. However, Henrikh Mkhitaryan is controversially not part of the squad due to political issues so this may pave the way for Mesut Özil who has not been favoured by Emery this season.

It is likely that Maurizio Sarri will play in a 4-3-3 formation, with César Azipilicueta, Andreas Christensen and David Luiz starting. Emerson has been playing left-back mostly in the Europa League but Marcus Alonso may start. Chelsea have many midfield options but the strongest option is to have Jorginho starting behind N’golo Kanté and Mateo Kovačić. Hazard could potentially play his last game for the club due to interest from Real Madrid.

Can Aubameyang fire the Gunners to European glory?

One of the highlights of the season for Arsenal is the impact of Aubameyang. The Gabon striker shared the Premier League Golden Boot with both Sadio Mane and Mohamed Salah on 22 goals as well as having an xG of 23.55 which was the highest in the league. This xG converts to an impressive 0.77 xG per 90 minutes.

Aubameyang has shown many attributes which have contributed to his goal return this season such as a fantastic finishing ability on his right foot, pace and strength. However, his xG value exceeds his goal value suggesting that Aubameyang gets himself into good scoring positions and this is done through his intelligence.

Aubameyang is very aware of his opposition defenders positioning and can exploit their positions in the box. Below Brighton go chasing the ball leaving space either side of the box, Aubameyang switches on to this and positions himself on an angle in space so when he receives the ball of Lacazette he has time to turn and shoot. Again having space inside the penalty area to shoot will lead to a highly valued xG chance.

Another good point of Aubameyang’s intelligence is that he knows to play to his strengths. Everyone knows that Aubameyang is one of the quickest players in world football. He was once clocked at Dortmund running 30 metres in 3.7 seconds which is faster than Usain Bolt over 30 metres. This makes it incredibly hard to complete the offside trap against him.

In the image above, he positions himself out wide and gives the defenders a yard. This allows him to time a run in behind the Watford defence. The advantage of being on the far side is his ability to judge when he needs to make runs. When he does, he can get into the blind side of the defenders. This prevents the defenders from screening off the pass so Aubameyang can create a scoring chance for himself.

How much will Arsenal miss Mkhitaryan?

Aubameyang has a high xG but many of these chances come from players playing the ball to him. One of the best positions to provide assists is the number 10 position and the main player in this role this season for Arsenal is Mkhitaryan. The Armenian has provided 0.35 xA per 90 minutes this season in the Premier League and is a crucial player in terms of feeding the Arsenal front two.

However, due to political issues, the Armenian will not travel to Azerbaijan. This might lead Emery to include Özil for the final who had nine assists in the 2017/18 Premier League. But with only two Özil assists this season, so it might have to fall to Aubameyang to provide as well as score. With five assists from a 4.99 xA this season in the League, Aubameyang has shown he can also contribute.

For a centre-forward Aubameyang likes to drift out wide and attack from the wings, allowing Lacazette to take up central positions. From these areas, he can use his pace and quick feet to cut in. When beating the players, it creates a dilemma for the defenders. Do they close down the ball and prevent Aubameyang from shooting or stick to marking Lacazette. If they give Aubameyang space he can strike from outside from the box which he has shown this season. However, if they give Alexandre Lacazette space, Aubameyang can play the ball into him to create clear goalscoring chances.

Looking at the back line of Chelsea David Luiz is a very attacking player who likes to drive out with the ball, however, if he loses the ball, he leaves gaps behind him in which Aubameyang can exploit. You can see below David Luiz drives out with the ball, but he is pressed by two players. Despite Jorginho making a recovery run to fill the gap that Luiz has left, if Frankfurt with the ball back and attack into the space created with a player with the speed of Aubameyang, they could beat Jorginho for pace and create a one on one situation.

But it is also in defending where David Luiz will be aggressive and try to battle with Aubameyang. This is something he tried to do with Luka Jović in the semi-final, but it led to Jović getting goal side of Luiz and equalising for Frankfurt. In this example, Jović wins an aerial duel with Luiz and sets it to his number 10. When he does this, he swivels and gets goal side of Luiz and converts his chance.

If Luiz tried to challenge Aubameyang like this, Aubameyang can easily win dual with his size and strength and then easily swivel past Luiz to get goal side with his pace and agility.

Could Hazard leave Chelsea with a bang?

With a huge amount of rumours of Hazard joining Real Madrid this summer, it could be a great finale for Hazard to bow out on. With a transfer ban for next season and Sarri also heavily rumoured with an exit to Juventus, this could be a game which closes the curtain for good on Chelsea being a superpower in European Football. So, will Hazard give us a finale to remember?

The Belgian has contributed superbly this season with 16 goals from an xG of 12.3 and 15 assists with an xA of 11.57. To exceed both such expected values shows the extreme technical ability he has. But another skill that he processes is his dribbling ability.

You only have to look at his contender for goal of the season against West Ham to see how good he is on the ball. If you don’t put another pressure on the Belgian, he can easily dribble past you and cause danger. Against West Ham Hazard finds the gap in between midfield and defence and attacks the space to get through and score.

So, when teams come up against Hazard they overcompensate and mark tightly towards him to prevent him from running forwards. The problem with this is it creates gaps that a player with the quality of Hazard can find and pick a pass. Below the presence of Hazard on the ball and the pressure of the Frankfurt defence creates a space in zone 16 for Hazard to play a ball into. Ruben Loftus-Cheek reads the play superbly and runs onto the ball from Hazard to score.

But when teams stay compact and keep tight in the box, they leave little space available for Hazard to play in behind. So, he is clever and dribbles to the byline, from this position he cannot score himself but he can set the ball backwards. Here he finds Kanté who equalises for Chelsea. The positive here is it is hard for the Burnley players to cut off the pass. If they go tight to N’Golo Kanté it will leave space in the penalty area for Chelsea to attack.

Hazard’s ability to use space down the channels may be very effective against Arsenal, especially if Emery chooses to play with three at the back. If you look at Arsenal against Valencia, there was a lot of space between the wing-backs and centre-backs. If Hazard has this space to exploit, he could drive into it if he does not get closed down, however, if he is closed down by Maitland-Niles, it will provide space to play the ball in behind Arsenal.

Here Valencia have a three on three with Arsenal on the counter. If Hazard had the ball in this situation, Sokratis would have to press to prevent him from using his agility to dribble past him to score. This would create a gap in the defensive line for a run from a player such as Kanté to exploit.  This would then leave Chelsea with an overload in the penalty area with a good chance of scoring.

This year’s Europa League final will be a battle of two great attacks, the question is which one would be more effective in Baku. This final is massively important for both sides if Emery wants to get the ball rolling again at Arsenal Champions League football is essential. However, with the possibility of a few high-quality members of Chelsea leaving and a transfer ban, a European triumph could be the difference to prevent Chelsea collapsing next season.