Arsenal earned an important victory over Chelsea in the Premier League, since both sides had crucial reasons for winning this derby as our preview pointed out. Now, this tactical analysis will reveal the strategy and failure of the Chelsea side.

Another similarity between these two teams was their recent inconsistent performances. For example, Chelsea had only scored five goals in their last five games in the Premier League. The club apparently hope Gonzalo Higuain will solve this problem as they chase the Argentine’s signature. Arsenal were the second team to keep a clean sheet against Chelsea in the last five games after Southampton.

There were no surprises with the teams since Chelsea and Arsenal put their best possible starting XI on the pitch. More importantly, Sarri continued to employ the false nine system which started last December against Manchester City. In this system, Hazard takes the centre-forward position in a highly flexible style.

This means he does not stick to his position, but rather moves a lot. The big question before the match was whether Chelsea would be able to creates space for Hazard to act in against Arsenal or not, as they had against Brighton for example. 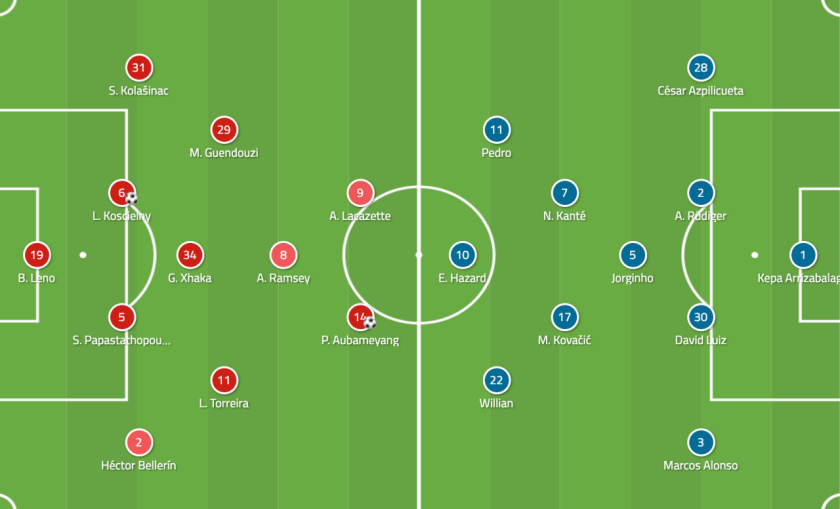 The simple answer was no. The home side pressed with great intensity from the beginning which created difficult circumstances. Chelsea were forced into their half, and when they attempted to progress they could not. Consequently, they struggled to reach the opponent’s final third.

The biggest achievement for Arsenal was that they were able to force Chelsea into a few hasty decisions which was most apparent in the build-up. When the guests’ progression slightly slowed down – such as when they played passes horizontally instead of vertically – Arsenal closed in and forced Chelsea to give up the ball.

When Chelsea tried to progress up the pitch they immediately met with difficulties as their opponents created a 6v5 numerical superiority in the middle. Chelsea therefore mostly tried to build down the wings.

When the ball moved to Azpilicueta or Alonso, the wing was closed down thus stopping Chelsea progress. 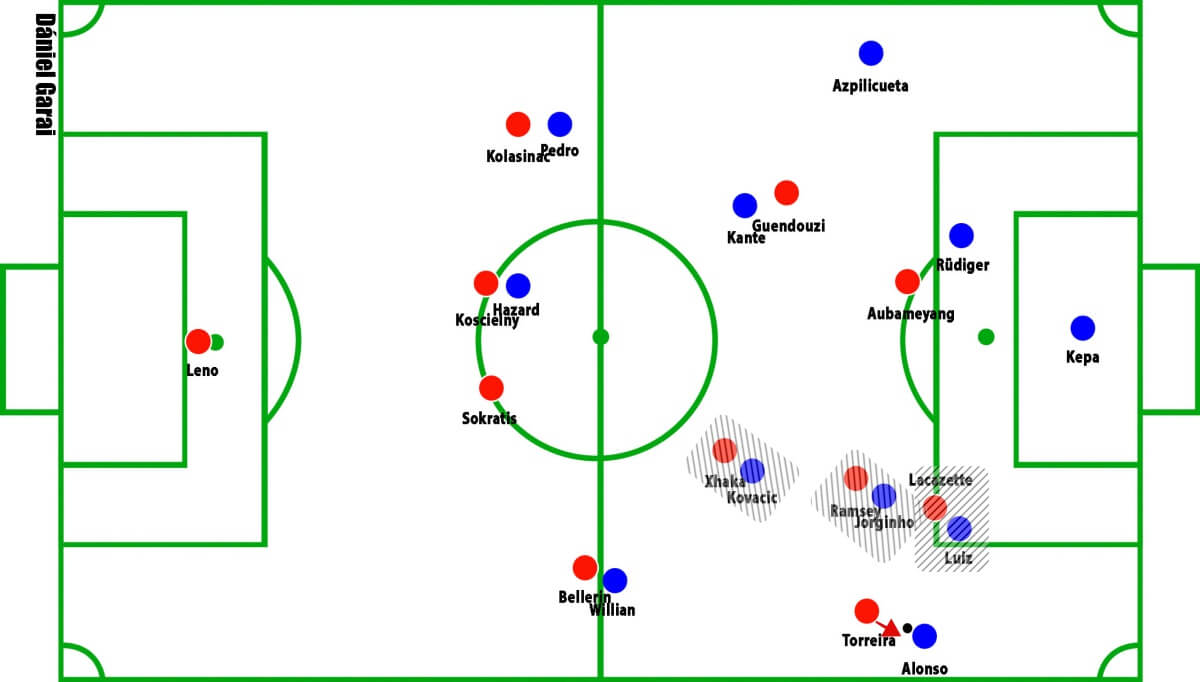 In the example above, Lacazette focuses on pressing David Luiz, while Ramsey follows Jorginho. Torreira leaves Kovacic free in order to press the ball-carrier Alonso, but Xhaka steps up to mark the open player.

In some cases, Willian dropping back offered a way out. He would lay the ball off to Kante or the advancing Alonso.

Reduced flexibility and troubles in the final third

The aim of this false nine system at Chelsea is to utilise Hazard’s dropping movement to create space for him so he can receive a pass and then turn towards goal. However, after the issues that Arsenal’s pressing caused, another problem was that Chelsea could not utilise Hazard’s role as I described above.

In these situations, the Belgian star met with high pressure from Koscielny who aggressively attacked him the instant he received the ball. Although Hazard has impressive skills in these kinds of situations, he couldn’t convert them into goals this time. Overall, Chelsea lacked connections between their players, which is apparent from their pass map below.

When Chelsea reached the home side’s final third they met other issues. Since the opposition formed into a compact defensive block they couldn’t find a way to break it and create goalscoring opportunities. However, they had a few chances, like Hazard’s or Pedro’s shots in the box. In the first case, Chelsea took advantage of time and space that a switch of play offered, and a quick low cross led to Hazard’s chance. Unfortunately, this was way too rare, but it would be a good tool for chance creation.

Chelsea should have used it to force the opponent to constantly adjust their position and push them out of their comfort zone. However, without this, Arsenal were able to keep a clean sheet.

Chelsea did not change most of their strategy for this match, thus the base positioning in their pressing phase was the same. They focused centrally, in other words with narrow wingers, whilst Kovacic and Kante were tasked with pressing the centre-backs and Hazard slightly marking the deepest midfielder, Xhaka. 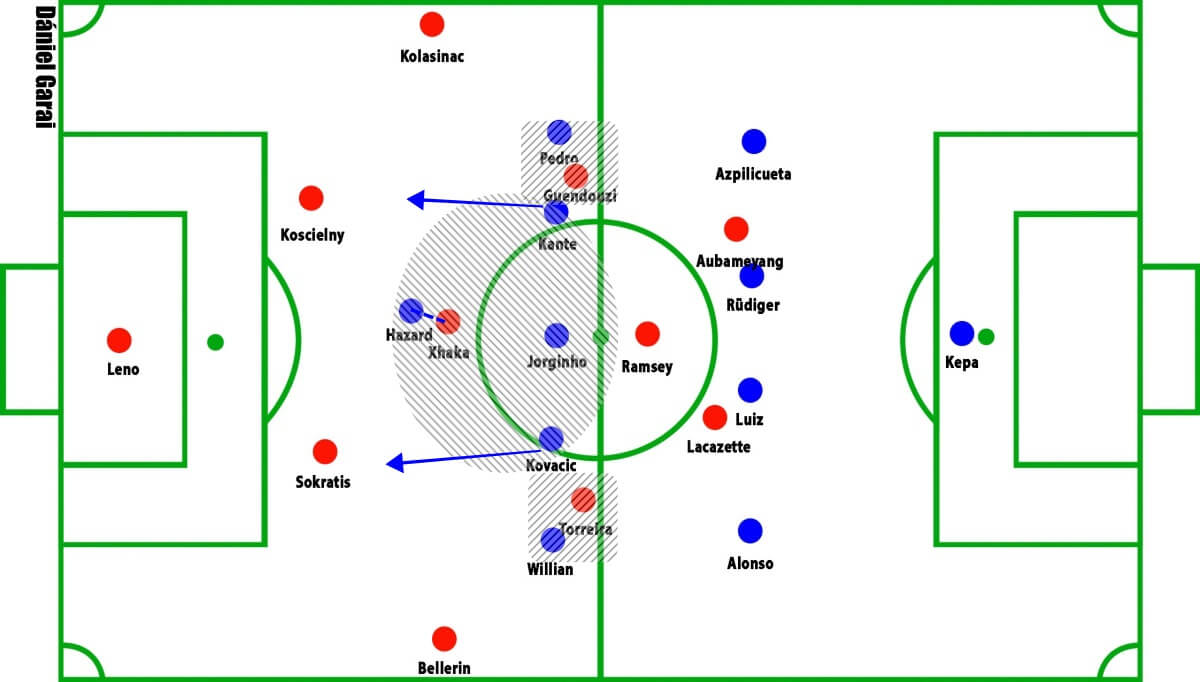 The aim was to force the opponent to the wing and trap them. This mostly occurred on Chelsea’s left side. However, Arsenal were able to find a way to constantly outplay Chelsea’s pressing set-up. 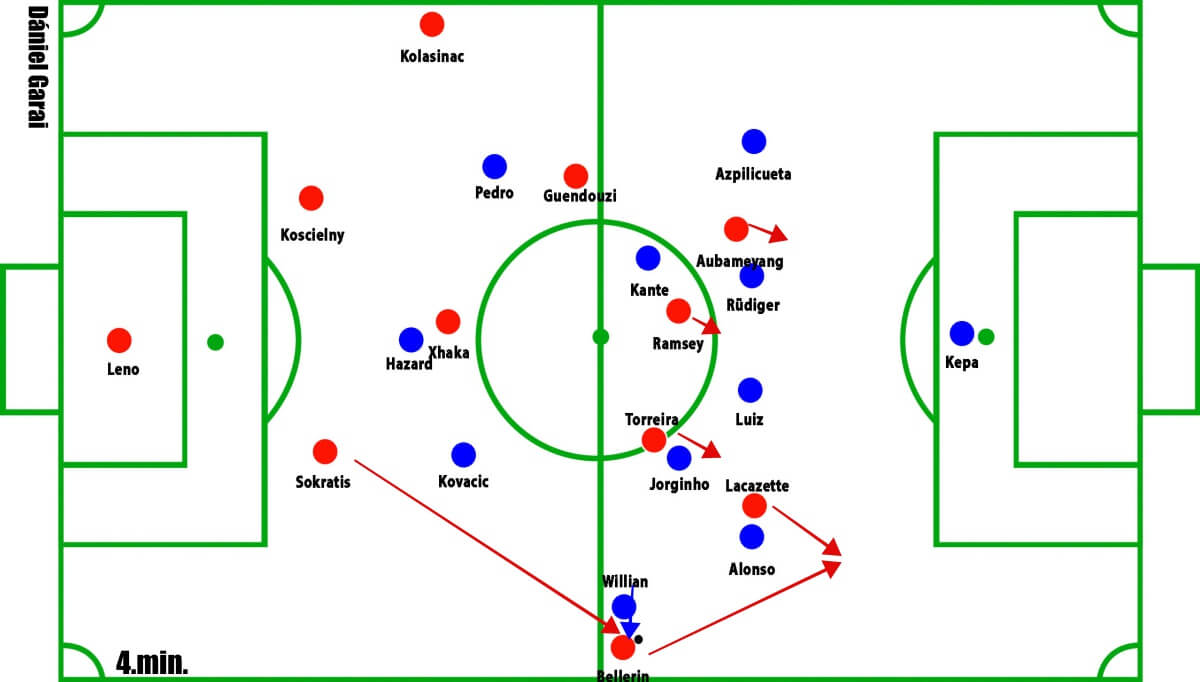 Due to the fact that this set-up leaves the wings open at first, Arsenal could bypass Chelsea’s first line of pressing in that zone with direct vertical balls towards the high full-backs. As you see above, with the late run of Willian he can only press sideways, which still leaves the diagonal and vertical passing lanes open. Arsenal use Lacazette’s speed and target the space behind Chelsea’s last line, ending up with a scoring chance for Aubameyang in the early stages of the game.

It was a solid method to advance against Chelsea’s press. On other occasions, Bellerin chose a different approach and started to cut inside or pass infield. In the situation detailed below, Xhaka has more space and time in front of Chelsea’s second line to receive the ball and target the opposite flank with long balls. This makes use of the other full-back’s run in behind Chelsea’s last line. 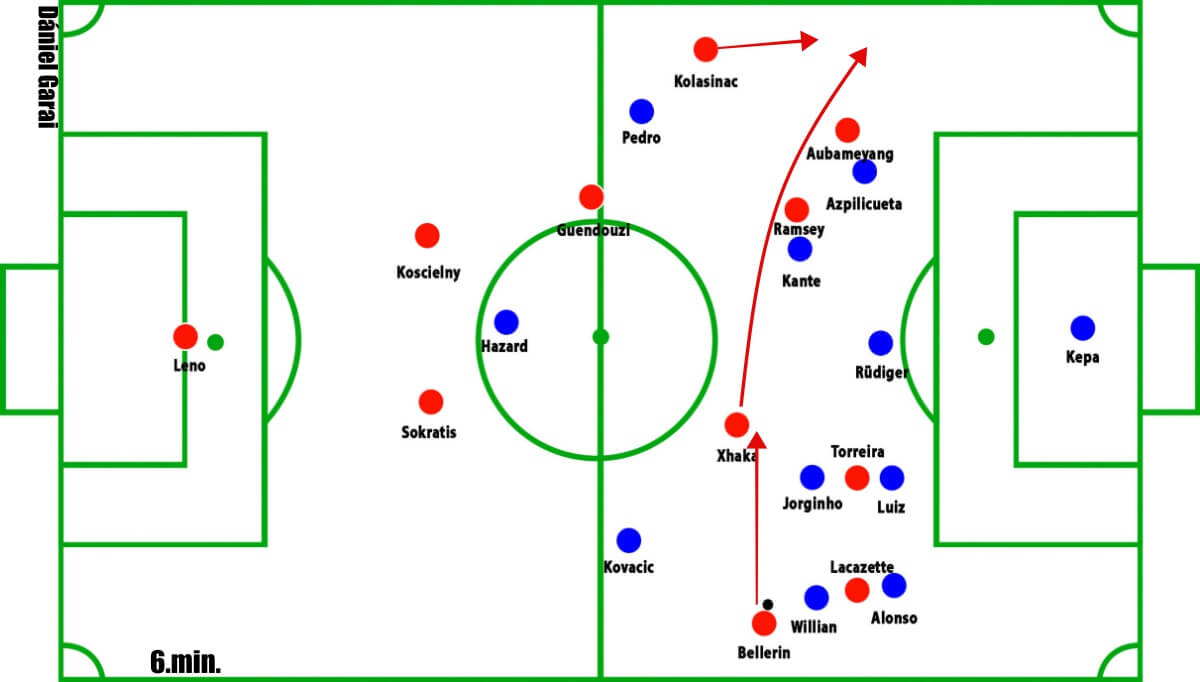 Of course, this would immediately force the visitors’ defensive structure into a deeper zone.

In conclusion, Chelsea were not able to employ the full potential of their game, which gives credit to Arsenal’s impressive job. In most cases, the guests were restricted by high pressure or tight marking, and on other occasions, Chelsea lacked precision.

There were also a few instances where bad decisions ruined the possibility of creating a chance. Overall Chelsea’s system did not seem functional, and they simply couldn’t deal with Arsenal this time. However, the battle in the Premier League continues.