Barcelona are yet another step closer to clinching the La Liga throne once again. Try as their might, Deportivo Alavés could not slow the Catalan giant down, nor could the rotations Ernesto Valverde opted for. Even though this game won’t go down as one of the classics, Barcelona were extremely dominant in their approach and the hosts had no answers to that superiority.

With another three points in the bag, the Blaugrana will only need three more to seal the deal. This tactical analysis will tell you just how they completed the first out of two steps on their way to glory. 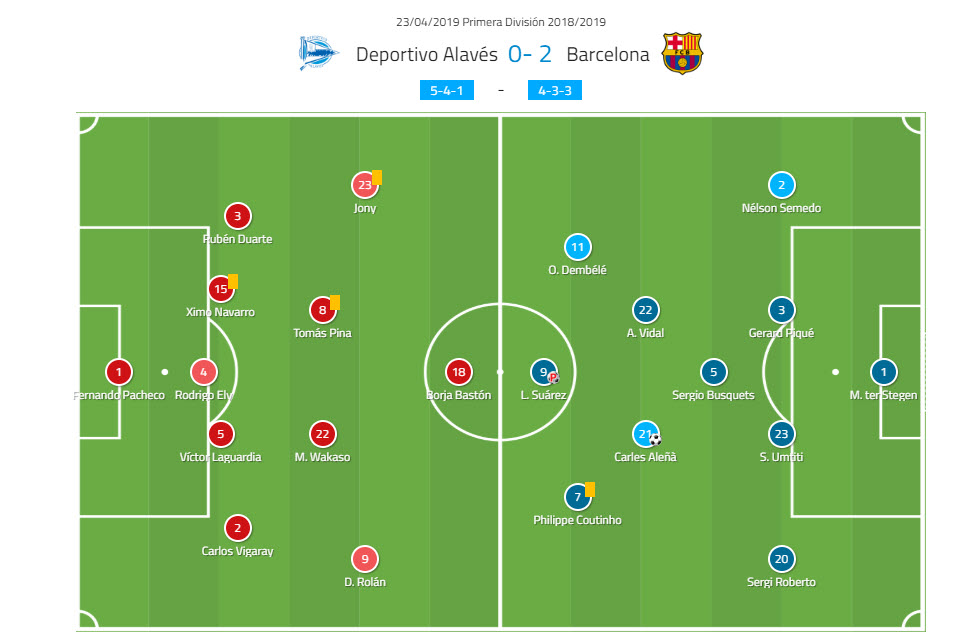 With Liverpool on his mind, Ernesto Valverde decided to once again rotate the squad and give his big guns some well-deserved rest. The likes of Lionel Messi, Ivan Rakitić, Clement Lenglet and Jordi Alba were left out of the starting lineup and the Croat out of the squad altogether.

Samuel Umtiti returned to the starting XI, as did Carles Aleña, and Valverde opted for an interesting solution for the full-back positions. This time, both Sergi Roberto and Nélson Semedo were on the pitch from the get-go, as the Spaniard compensated for Alba’s absence on the left.

A similar thing happened with the forward trio, as both Philippe Coutinho and Ousmane Dembélé started the match with Lionel Messi on the bench. The team operated in a 4-3-3 system throughout the whole game.

With five players missing due to either injury or suspensions, Deportivo Alavés were forced to shuffle the cards just a tiny bit. From the team that faced Real Valladolid not even a week ago, only four players remained the same while the rest were changed.

The back five consisted of Vigaray, Laguardia, Navarro, Ely and Duarte as they at least tried to keep Pacheco safe in-between the sticks. Jony, Pina, Wakaso and Rolán graced the middle of the pitch while the role of the lone striker fell to Baston. The team operated in a 5-4-1 system that saw some little changes in the latter stages of the game.

The home team deciding to turtle up and try to weather the storm was always likely, and in the end, it was exactly what we got on Tuesday night. Deportivo Alavés decided to let Barcelona dictate play, probably more forcefully than by design, but the Catalans did not think twice before accepting such a generous offer.

And indeed it was one of the most dominant displays Barcelona have given us in a while, but it was only visible in sheer possession and suffocation of the opponent. Deportivo Alavés only managed to record a meagre 24.49% of average time on the ball with their highest mark coming at the end of the game when they climbed all the way up to 37%.

But the reason why I said it was domination visible just in possession is that Barcelona, for all that superiority, couldn’t really cause that much trouble to the extremely compact shape of a well-organised Deportivo Alavés defence. The hosts defended in a 5-4-1 formation, which would sit back when welcoming Barcelona in their own half, and would focus their efforts on constantly blocking all passing channels through the middle.

Notice how in the image above Deportivo Alavés practically have 10 men behind the ball, and are deep in their own half. Even though Barcelona are pretty much used to playing against teams who sit back and try to wait out the attacks, breaching a low-block as compact as this, especially with a somewhat rotational squad, was a task easier said than done.

The reason for that is the positional disadvantage that occurs for Barcelona’s forwards in these situations, as can also be evidenced in that same example. The first line of attack is easily marked out of the game unless some other changes are made in the attacking camp.

As the shape of the home team’s defence was wide in their backline but extremely narrow up front, Barcelona used this to their advantage in the build-up. The midfielders would easily find the full-backs, who were position high up the pitch and more importantly, completely isolated and alone.

As a result, the away team did not have any trouble entering the final third of their opponents and did so with relative ease. Seventy eight out of 92 passes completed into the final third is a stat that definitely supports this thesis, as does the fact that both wingers, namely Philippe Coutinho and Ousmane Dembélé, received the most passes into the final third from their respective full-backs.

Therefore, we can conclude that Barcelona easily transitioned their attacks towards the wide men, who were mostly unmarked, and then they progressed the ball further into the danger zones. Circling around Deportivo Alavés’ box was indeed not really a problem but getting a palpable result definitely was.

Most of Blaugrana’s attacks went down the right this time, and this was somewhat understandable considering that the more impactful Ousmane Dembélé was there and with Jordi Alba on the bench throughout that first half. The problem with the left was that, as much as Sergi Roberto was a more offensive option as opposed to Nélson Semedo, him being a natural right-footer made things far more complicated for him.

Barcelona managed to get into some really dangerous situations in the opening stages of the game but as soon as they exposed Deportivo Alavés’ right flank, the play stagnated and the ball circulation was not as swift as it should have been. Still, getting to that part was mostly Carles Aleña’s job.

The young La Masia prodigy was tasked with receiving the ball and then advancing it wherever he felt was best. The Catalan was positioned on the left side of the midfield trident but often occupied the area between the lines, dropping and raising his positioning as necessary. The example below demonstrates one of the ways in which Aleña was used to unlock the stubborn Alavés defence.

His movement between his two markers gets him the newfound free space to receive the pass from his centre-back but also gives Coutinho the freedom to make a darting run behind the opposition’s backline.

A quick turn followed by a brilliant through-ball set Barcelona up for success but they failed to convert their chance. Missing those clear-cut openings proved to be quite a headache for the away team as they slowly but surely lulled themselves into a stagnated flux, circulating their prey with no signs of progress whatsoever.

But as is usually the case when teams decide to turtle up against Barcelona, as soon as fatigue kicks in and legs get heavy with every passing moment, the Catalans start getting the better of their opponents.

Deportivo Alavés would rarely venture forward in an attempt to contest the ball, as was evident from their possession stats, but in those rare situations when they did, their formation shifted to a 4-4-2 and then transitioned to 4-3-3 when they stepped deep into Barcelona’s territory.

Barcelona, of course, had their ways of bypassing that press. They simply either utilised Marc-André ter Stegen’s passing abilities or, what was more interesting and new to see, created a backline of four players to stretch out the pressing trio of Alavés and clear channels that lead higher up the pitch.

Sergio Busquets would often drop in-between the centre-backs but if the hosts really pushed hard, the Spaniard was then accompanied by Arturo Vidal. The two midfielders would support Gerard Piqué and Samuel Umtiti in a quartet at the back.

Vidal was the most flexible part of that midfield trident as he would sometimes assist in the attack by going all the way forward and attracting markers or by dropping all the way to the back to assist the build-up.

That way, Barcelona would have a numerical superiority when fighting off the pressing squad and would still have numbers up front since the full-backs would act as midfielders and the team would actually transition to a slightly altered 4-3-3.

For those reasons, and for the general resistance to press, Barcelona were able to withstand the attempts of their hosts but also limit them in their approach. One of the greatest weapons they used in the game was a press of their own, which yielded them 79 recoveries on the night and a total of 101 losses for Alavés.

Interestingly enough, 46% of all those losses happened in Alavés’ first third, and four in total resulted in a shot on goal. It’s safe to say that Barcelona did not let them breathe and were extremely aggressive in their approach but most of all, they were successful.

The final thing that tipped the scales back into the Catalans’ favour was the decision to swap Nélson Semedo and Sergi Roberto, moving the Spaniard to his natural right and the Portuguese to the left. This did not suit Semedo as much but since he was mostly tasked with defend rather than attacking, it was a risk worth taking. And it paid off immensely.

Roberto not only became that much more impactful but he immediately took part in the attack that gave Barcelona the lead. That attacking action was the culmination of all the aforementioned tactics and strategies Ernesto Valverde implemented.

The attack starts with Barcelona regaining possession after a brief spell of Deportivo Alavés time on the ball. The build-up starts quickly as Roberto is found free on the flank, as was the case throughout the game due to the narrow shape of the home team. His tendency to support the attack comes into play, as does Valverde’s decision to swap him with Semedo.

Arturo Vidal is in the attacking phase as he assists the attack, playing a quick one-two with Roberto whose excellent through-ball finds Aleña lurking between the lines, as he was throughout the game. The dummy from Suárez made it possible for the young Catalan to get face to face with the keeper, and his calm finish sealed the deal for Barcelona.

It was a perfect team effort and a crescendo of all the build-up until that point in the game. Deportivo Alavés, for all their efforts, had no answer and were powerless to reply, as their xG value of 0.22 suggests as well.

Barcelona only need three more points, so a win at the weekend would seal them their eighth La Liga trophy in the last 11 seasons. It’s been an incredible decade of dominance for the Catalan giants. Even though no one would bet against them at this moment, let’s wait until the race is mathematically behind us before we crown the new (old) kings of Spain.

Deportivo Alavés did their best to try and tame the beast but their over-commitment to defence left them practically non-existent in the attacking phases of the game. In such a scenario, the goals from Barcelona were just a matter of time.

But still, as glorious as this La Liga celebration might be at the weekend, the true caveat awaits against Liverpool in the Champions League, and that should be a battle to remember.