Bundesliga 2018/19: Why Schalke should switch to a back four again

The following tactical analysis will deal with several statistics which reveal Schalke’s lack of possession and the tactical reasons for that.

When taking a closer look at the used formations of Schalke, it becomes clear that there have been a lot of changes under former coach Tedesco.

Recently, Schalke used back-three formations. Whereas Tedesco deployed different formations such as a 3-4-3, or a 3-5-2 with either two advanced midfielders or a double pivot in possession, Huub Stevens banks on his preferred 3-5-2 formation without any exception.

Before changing to a back three, Tedesco liked to utilise a 4-2-3-1 system. From a statistical point of view, this formation was the most successful one of this Schalke season. Last season’s runners up managed to win three matches, lose only two games and draw a further two using the 4-2-3-1.

But there has also been a remarkable change of key personnel in midfield since Stevens took over. Central midfielder Nabil Bentaleb, who played a key role under Tedesco, has only played 23 minutes under new manager Stevens. The Algerian international was injured at first and then left out of the squad due to disciplinary reasons. Instead, Benjamin Stambouli (74.7%), Nassim Boujellab (73.7%) or Suat Serdar (70.7%) have been lined up in central midfield. All of them possess a lower pass completion rate than Bentaleb (79.3%).

In addition to that, Schalke obviously played with one more central defender after switching to a back three. Centre-back Jeffrey Bruma has benefited from that and played 83.3% of the minutes since Schalke’s match against Fortuna Düsseldorf. To compare, before that, the defender only played 9.4% of possible minutes.

A decrease in the duration of possession

When taking a look at the statistics since Schalke’s game against Düsseldorf at the beginning of March, they’ve only played 2.8 passes per possession on average. That is way less than the league average.

The Bundesliga side struggle to sustain possession under their Dutch coach. By keeping the ball only 7.59 seconds per possession since their game against Düsseldorf in March, Schalke rank 17th among all 18 Bundesliga teams. It has to be said that short possession phases in general do not have to be a problem. Nevertheless, this has had an influence on the structure and shape of the team.

However, Schalke also decreased the average time of possession of their opposition. There was a decrease in the duration of opposition possession from 10.61 to 8.1 seconds.

One issue which comes along with a short time window of possession is that Schalke’s wing-backs are unable to move up the pitch and support the attack. And even if they are capable of running forward, it is a possible threat that they will be caught out of position once Schalke lose the ball.

The short possession phases are caused by early passes into depth. However, Schalke’s attackers are often in situations with a numerical disadvantage. This proves that Schalke do not differ between playing sensible long balls or better sustaining possession and progressing up the pitch as a unit.

The 4-2-3-1 offers an additional player in wide areas compared to a 3-5-2 system. The Positions and Passing Network above shows that Schalke played a lot of passes in wide areas of the pitch.

In Tedesco’s 4-2-3-1, Schalke benefited from the advantage that the back line offers players on different lanes in build-up. Since the full-backs are positioned behind the opposition strikers, they offer the option to switch play.

In contrast, when playing in a back-three, Schalke highly depend on the attacking power of their wing-backs who therefore push higher. To play into more advanced areas, it requires defenders with splendid passing skills. However, central defenders Salif Sané, Bruma and Matija Nastasić are all known for their defensive skills rather than for their passing abilites.

One could also make use of the back three by situationally pushing one centre-back into midfield which would create the opportunity to overplay the first line of press with one simple pass. But the central defenders do not possess the perfect skill set to execute this kind of strategy.

Schalke even scored both goals against Hertha Berlin from wing attacks. In the first situation, Schalke used a positional attack and switched sides to a 2v2 situation.

With winger Yehven Konoplyanka and the overlapping full-back Bastian Oczipka, Schalke can outplay Hertha’s defenders. After dribbling towards the centre since, Oczipka attracts Berlin’s defenders on the wing, Konoplyanka can take a shot from outside the box and score. 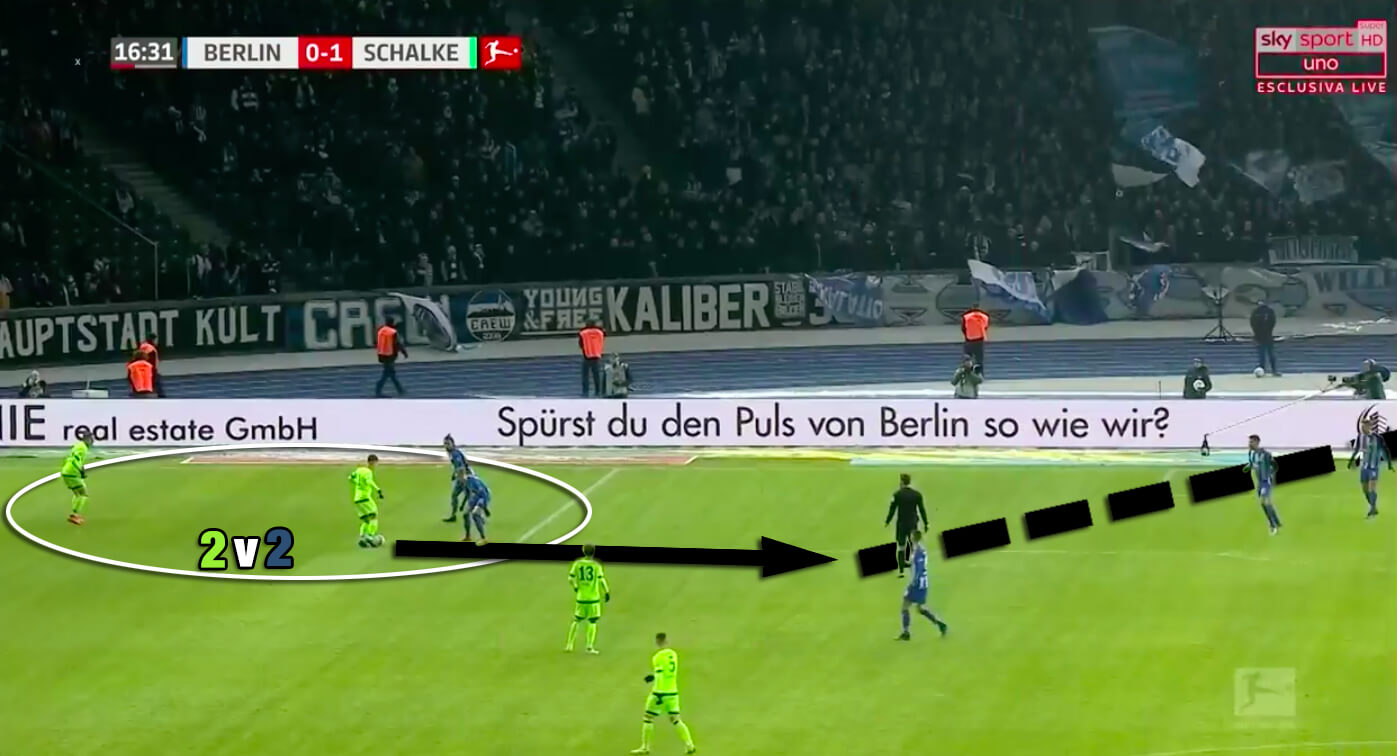 The second goal resulted from a counter-attack. However, the role of the overlapping full-back was vital, too. After winning the ball, left winger Konoplyanka carries the ball into Berlin’s half while left-back Oczipka uses the time to make an overlapping run. 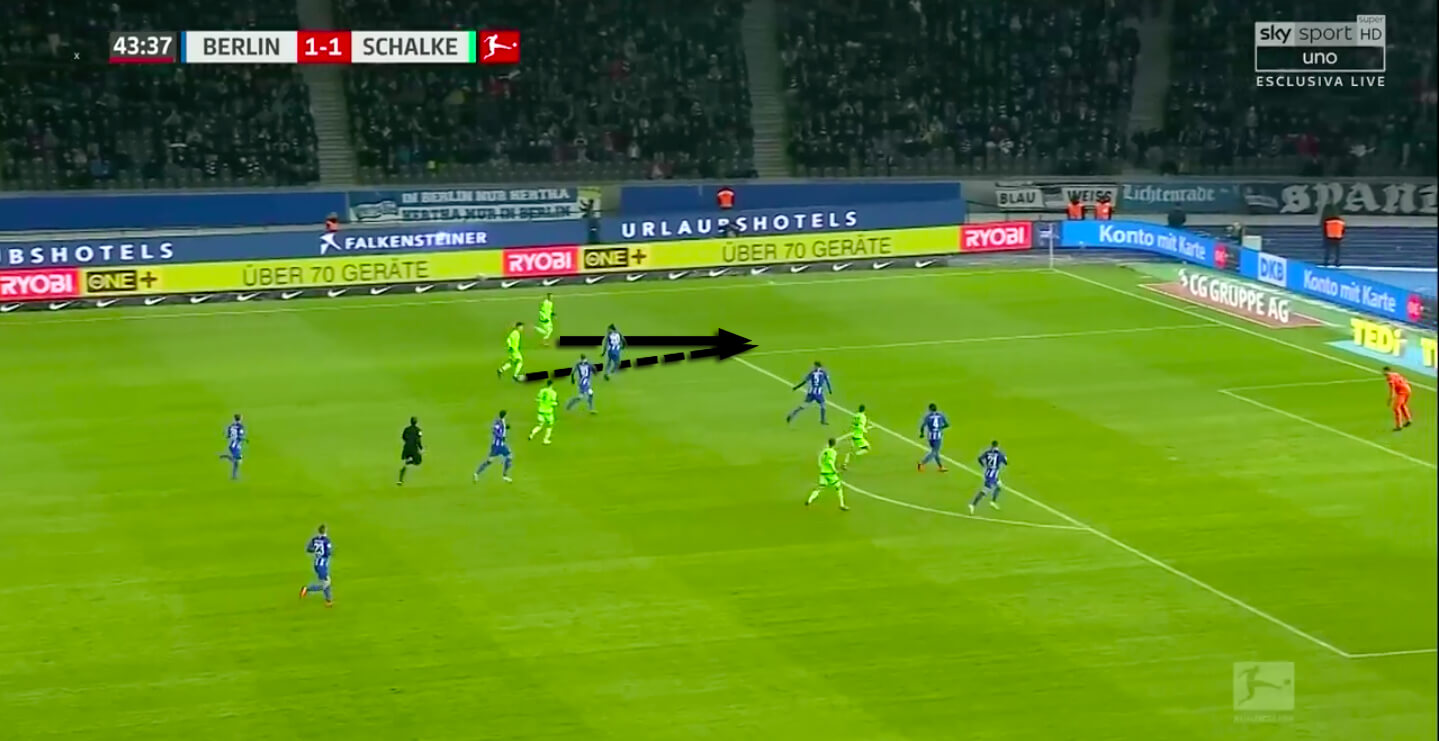 In the following, he receives the ball and assists playmaker Mark Uth who scores the second for his side. 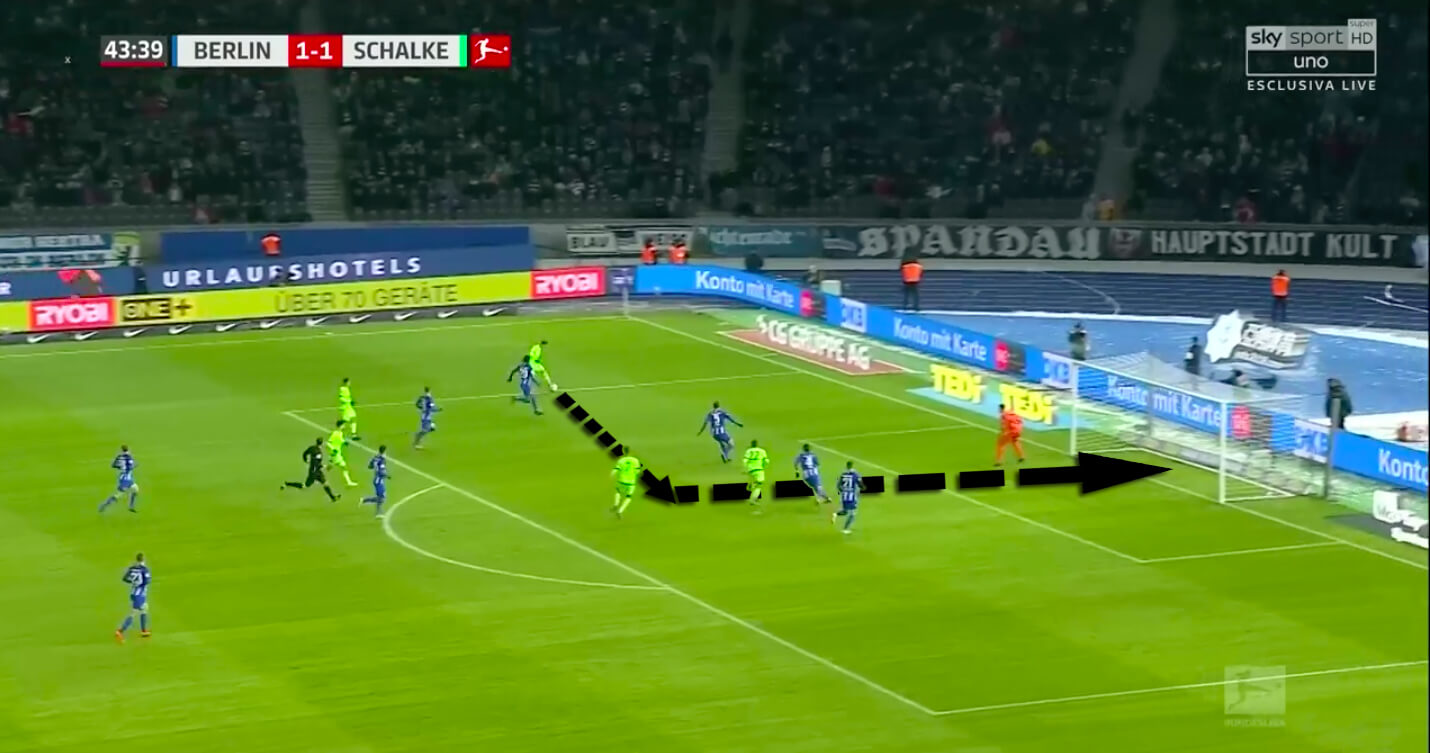 In general, with a back-four system Schalke have several passing options after playing out wide as one can see below. The playmaker can occupy the space between the lines, while the defensive midfielders provide further passing options into central areas. 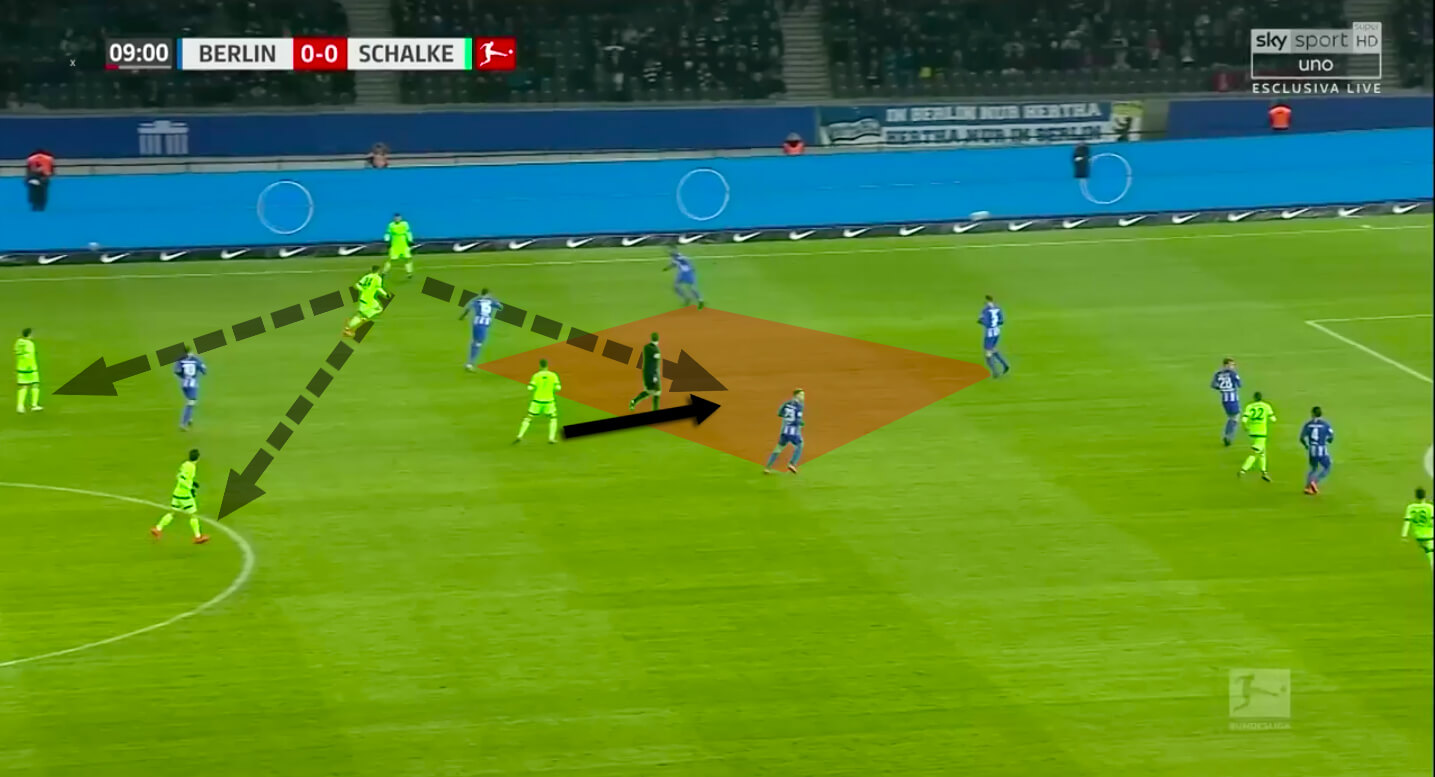 The 3-5-2 of Schalke misses passing options in wide areas. Their strong wing play completely disappears. The above displayed graphics points out that their left wing-back missed any option to play further forward. The wide player only played square passes back into the centre.

In their 3-5-2 shape, Schalke’s midfielders also do not offer short passing options for their wing-backs often enough. In the situation below for instance, left wing-back Oczipka carries the ball out wide. Meanwhile, only the ball-near midfielder makes a deep run. Single pivot Omar Mascarell does not even try to move out of the cover-shadow of his direct opponent though.

Moreover, it should not be overlooked that many opponents have tried to press high against Schalke lately. As a consequence, Schalke have needed to play long balls and thereby often lost possession. But the long balls also resulted from a lack of off-ball movement towards free space.

The scene below shows that left wing-back Oczipka immediately starts a run forward when Nastasić receives the ball. However, the defender does not have a short passing option. Therefore, providing width and thereby opening up passing lanes into the centre would be more sensible at this moment.

As a consequence, the centre-back hits the ball long towards the two strikers. Playing against five Nürnberg players though, the attackers lose possession immediately.

In another situation against Nürnberg, Schalke’s back three are positioned narrow in possession. 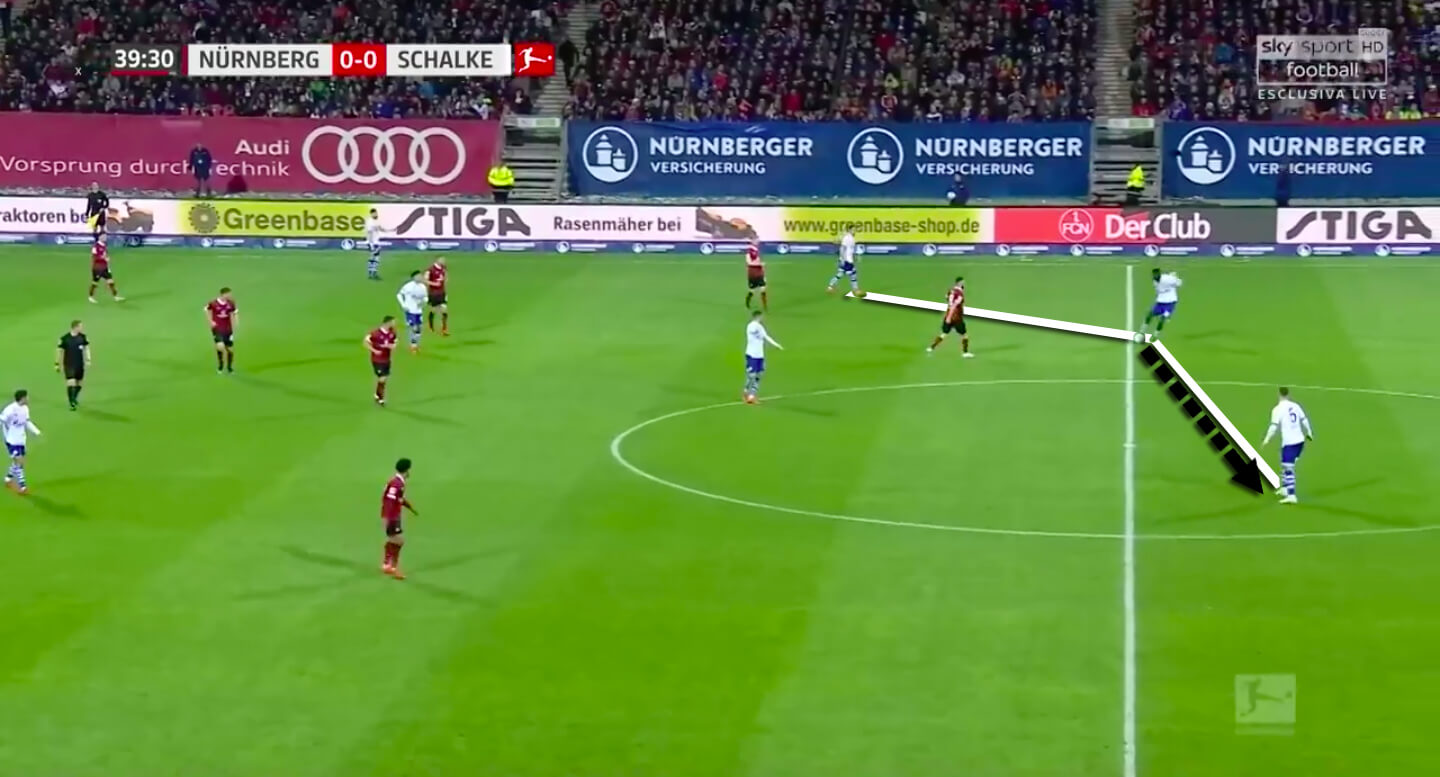 Therefore, left wing-back Oczipka needs to position himself in front of the opposition midfield line to receive the ball. The issue is that the wing-back is the only wide player. The ball-near midfielders are in deep-lying positions. As a result, Oczipka cannot play forward and Schalke are stuck on the wing again.

Even if he finds an option to play towards the attackers, both strikers would miss the needed support in wide areas.

Huub Stevens follows a similar philosophy to Domenico Tedesco. However, the possession phases of Schalke in particular have become significantly shorter since he took over. This indicates that Schalke play even earlier into advanced areas. But due to a lack of penetrative power up front, this does not lead to many chances.

Schalke seem to be depriving themselves of the possibility to use their strong wing play. Therefore, it might be worth a try to switch to a back-four system again.