The Gewiss Stadium hosted a match between two top-six sides in Serie A between Atalanta and Napoli this weekend. This tactical analysis will break down the game that ended 2-0 to Atalanta.

Atalanta, led by Gian Piero Gasperini, looked to utilise the strength of their wing-backs and looked to create opportunities down the flanks to send balls directly into the feet of their forwards in the box. These tactics have been present throughout the campaign, particularly the use of their wing-backs, as we have seen the likes of Robin Gosens have a great season. This has aided Atalanta in their impressive campaign, as they are currently sat in 4th place, a considerable twelve points ahead of 5th place, Roma.

Napoli, managed by Gennaro Gattuso, who have recently won the Coppa Italia, have improved under the Italian, if not awe-inspiring. Under the former AC Milan player and coach, they have won by a one-goal margin on numerous occasions, showcasing defensive solidarity over attacking fluidity. This analysis will take a deeper dive into this game, and how Atalanta managed to beat Napoli.

Atalanta lined up in a 3-4-1-2 formation which looked to play with width and utilise the space in behind that Napoli left thanks to their high-line. Gasperini’s side was fronted by Duván Zapata and Mario Pašalić, who has recently signed permanently to the Nerazzurri from Chelsea, with Papu Gómez operating the #10 space behind them. Notably, Serie A star Josip Iličić did not start, or come off the bench in this game, due to a recent knock he received.

Regarding the midfield, Gasperini went for Swiss international Remo Freuler and Marten de Roon, with Freuler acting as the more progressive of the two. Due to Pašalić operating in a forward role in this game and Ruslan Malinovskiy serving a suspension, these two were the only two quality midfield options that Gasperini had to choose from. The two wing-backs were Robin Gosens on the left and Timothy Castagne on the right, with Gosens impressing, in particular, this season, at least on an offensive basis. The back three consisted of Berat Djimsiti, Mattia Caldara, and Rafael Tolói, with Argentine José Luis Palomino starting on the bench in this match. Pierluigi Gollini retained his place as the first-choice goalkeeper. 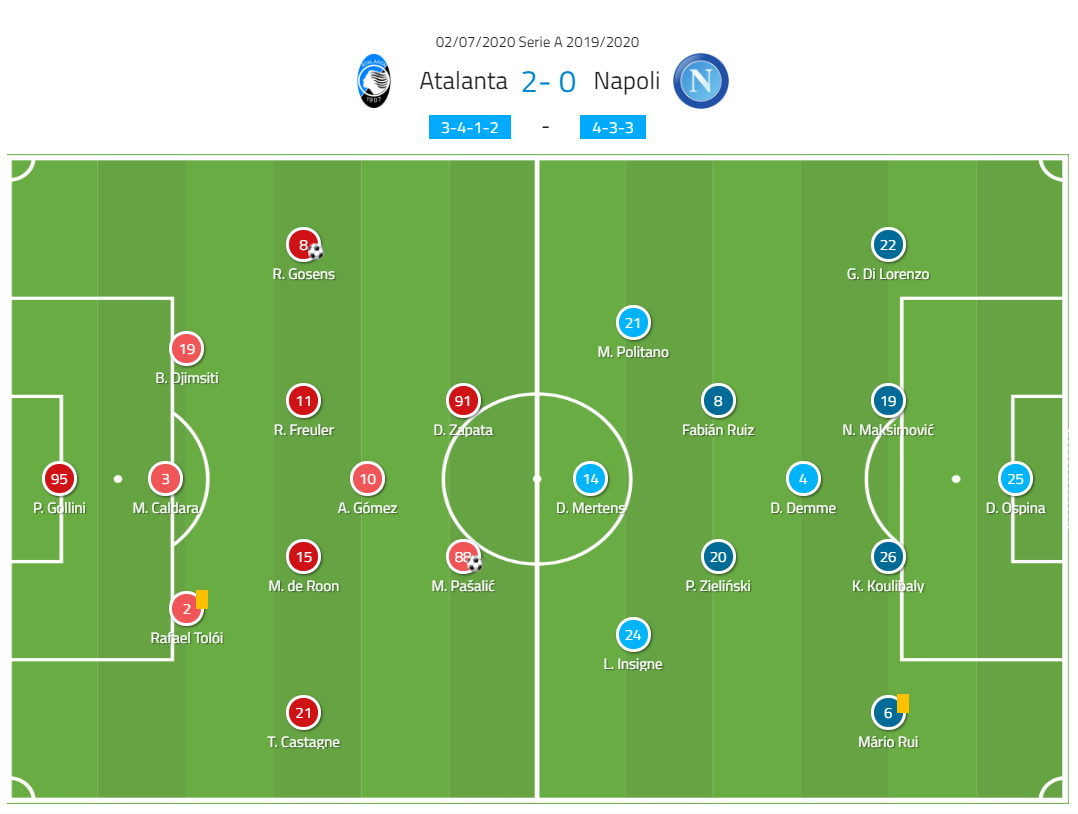 Napoli set out in a 4-3-3 formation with Gattuso looking to dominate possession in the midfield area and progress the ball forwards through short inter-plays. The front-three consisted of Lorenzo Insigne, Dries Mertens, and Matteo Politano, with three capable back-ups available on the bench, who would be introduced later on in the game (José Callejón, Arkadiusz Milik, and Hirving Lozano).

The forward line were supplemented by Fabián Ruiz, Piotr Zieliński, and Diego Demme. Fabián has shone in particular for Gli Azzuri this season, which will be discussed further later on in the article. The back four consisted of Mário Rui, Kalidou Koulibaly, Nikola Maksimović, and Giovanni Di Lorenzo, with Gattuso aiming to make use of two progressive full-backs in this match. David Ospina was in between the sticks at the start of the match.

Atalanta have had a collection of forwards who have been incredibly efficient in front of goal in Serie A this season. This is seen in the difference between the value of their actual goals of 82 against their xG of 68, which are both helped by their league-leading 19.4 shots per game. Gasperini’s side are the outstanding attacking force in Serie A, with the likes of Iličić, Zapata, and Luis Muriel all having excellent goalscoring campaigns.

In this game, Atalanta were outdone in terms of chance creation and shots on goal, Napoli generally dictating the play. Throughout this game, Atalanta struggled to defend down their right-flank, with Tolói and Castagne putting in a weak defensive performance overall. Tolói managed to win just 44% of his nine defensive duels while Castagne won none of his five defensive duels in this game, as they both struggled to contend with Insigne/Lozano, Zieliński, and Rui combining. In these defensive moments, Atalanta were dictated from one side to another fairly easily.

Thankfully, Atalanta were not punished by some of their defensive frailties, and the chances they did create, they took full advantage of. They created chances through crossing with more frequency than usual, perhaps as a result of Iličić not featuring, who likes to attack at the core of the opposition through his direct style of dribbling. This saw Gómez drift out wide on numerous occasions and attempt to send a direct ball into one of the two centre-forwards. With Zapata and Pašalić upfront, who both stand at 6’1”, Gómez was encouraged to send his balls aerially, to ascertain a larger chance of scoring.

Atalanta were not at their fabulous best in this game. They did muster the volume of chances they usually would, and they struggled to keep out the attacks of a structured Napoli side. As stated, they managed to finish the chances they did create, with Gosens’ goal coming across as especially fortunate. The chance that Gosens finished making the game 2-0 in favour of the home side was given an xG value of 0.07, given the angle, he took the shoot from and Napoli defenders in front of the goal.

In a few instances, Napoli demonstrated excellent build-up and interplay between teammates, to bypass the pressure laid upon them by the opposition. While they tended to favour long shots in this game, those instances where they successfully bypassed opposition pressure, Napoli created chances of high quality. Napoli were much more efficient than Atalanta in this game with their attacks, with 33% of their attacks ending with shots, while only 18% of Atalanta’s attacks ended with shots. Napoli have generally been successful in creating chances this season, but they have struggled to finish those chances.

In this match, Gattuso’s side enjoyed rotating the ball from one side of the pitch to the other, to stretch the Atalanta defence. As mentioned Gattuso chose two progressive full-backs, of whom he allowed to roam forward in this game and encouraged them to have small inter-plays with their teammates. Di Lorenzo and Rui were often at the origin of many attacks, completing ten and thirteen progressive passes, respectively. This allowed Napoli to exploit the space down the flanks in the final third left by the Atalanta wing-backs.

This was essentially the story of the match-up. Napoli produced more attacks throughout the ninety minutes, but they could not finish the chances they created. Though it must be said they did not create one single chance where you expect a player finish it more times than not. As stated previously, it was a largely long shots they took, with 60% of their fifteen efforts on goal coming from outside the box. In part, this is due to the likes of Insigne, who tend to take a shot on goal before looking to create a chance with a pass.

Fabián has stated in a few interviews that his idol was Xavi, and you can see how he was inspired by him in this match. The Spaniard put in a well-rounded display in his role as a type of advanced #6, providing moments of value in every aspect of the game, but excelling, especially in his passing endeavours. In this game, he took one shot, won two defensive duels, and completed eight passes into the final third.

The 24-year-old has had an excellent season in Naples, which has led to him being tracked by a host of top European clubs, including Barcelona, Manchester City, and Bayern Munich. His progressive and creative numbers have been up there with some of the best in Serie A this season, with solid defensive numbers to boot, to make for an accomplished midfielder. Possession adjusted, he has 3.72 tackles and interceptions this season, combined with 3.4 open-play shot-creating actions, and 90% pass completion. He is capable of recovering the ball and creating a chance in one fell swoop for his side.

Finally, we can see that Atalanta continue their hot streak, which has been apparent all season long. In this game, they produced an xG value of 0.42, while Napoli generated 1.07 in the metric.

Although Pašalić’s effort was a deserved goal and poor defending from Napoli, Gosens’ goal can be seen as fortunate, in combination with a few of Napoli’s efforts which were unlucky not to go in, Gattuso should not be discouraged from this performance. Of course, Atalanta are a very difficult side to play against, especially defensively, with so many individuals capable of producing moments of individual brilliance which often cannot be stopped. They did well in the build-up here, they just need to improve upon some lapses in concentration defensively, and the goals will come.

Gasperini can be happy with taking the three points in this game, as they aim to leapfrog Inter Milan in third place to avoid the dreaded qualifying rounds of the Champions League (which they would be entered into if they finish 4th place). Without Iličić, they did somewhat struggle to create chances in this game, and this should be a worry for Atalanta, if his performances are to fall off next season, at 32 years of age. In a sense, they deserve the luck they are getting, as they have the best expected points value in the entire league, at 60.61.