The Premier League fixture between Liverpool and Crystal Palace ended in annihilation of the visitors, who didn’t get any real chances in this game and conceded plenty. With arguably the best performance we’ve seen from the Reds this year, the long wait for the title is nearly over and Liverpool showed themselves as a deserved champions.

In this tactical analysis, I will delve into how Liverpool’s positional rotations in the build-up and attacking fluidity helped them dominate the game from start to finish, and how Crystal Palace were unable to counter it with their tactics.

Roy Hodgson opted for a 4-5-1 formation with Gary Cahill starting instead of Scott Dann, Crystal Palace’s captain Luka Milivojević remained on the bench with James McCarthy starting, and Jordan Ayew played as a lone striker with Christian Benteke on the sidelines. Wilfried Zaha picked up an early injury in the 15th minute and had to be subbed off for Max Mayer. Lastly, Wayne Hennessey replaced Vicente Guaita in goal for this match.

Liverpool used the same tactics when approaching the build-up phase which they’ve used for the whole season. In the game against Everton due to the absence of two left-footers, Robertson and Salah, the effectiveness dropped significantly, resulting in only 0,73 xG in that game. With those two players back in the line-up for this game, Liverpool dominated possession and made great use of it during the whole match.

In the build-up, Jürgen Klopp asks his players to create situational back-threes with the help of one of the midfielders. In this game, this concept went to a new extent, with not only midfielders dropping into the backline, but also players from other positions. Here, Alexander-Arnold drops and forms a back-three with Van Dijk and Gomez, while Salah is out wide and Henderson operates behind Crystal Palace’s midfield.

With Roy Hodgson’s side using only one striker, adding one more situational centre-back wasn’t necessary, as VVD and Gomez created 2v1 situation without any help, and that would’ve been more than enough to get the ball further without them having much pressure. However, Crystal Palace’s pressing game was so poor in this match that having one more seemingly useless player at the back allowed to create more passing options between the backline and the rest of the team.

Having one more player there also allowed full-backs to push higher, and Liverpool had a player in deeper half-space (wide centre-back or full-back), a player in more advanced half-space in the final third(midfielder or full-back), as well as a player providing width(again, midfielder or full-back). With Salah and Robertson back, these concepts bore fruit, because there was no more inclination towards the right side like in the game against Everton. The very presence of Robertson on the pitch forced Crystal Palace to stretch out their defensive shape and created more even distribution of attacks compared to the last game.

Starting from the second half, where the dominance of Liverpool became more apparent, these positional rotations hit a new level with sometimes Salah dropping deep. You can see this in the image below, Salah drops into the deeper half-space, while Trent is a little further and Oxlade-Chamberlain out wide on the right flank. 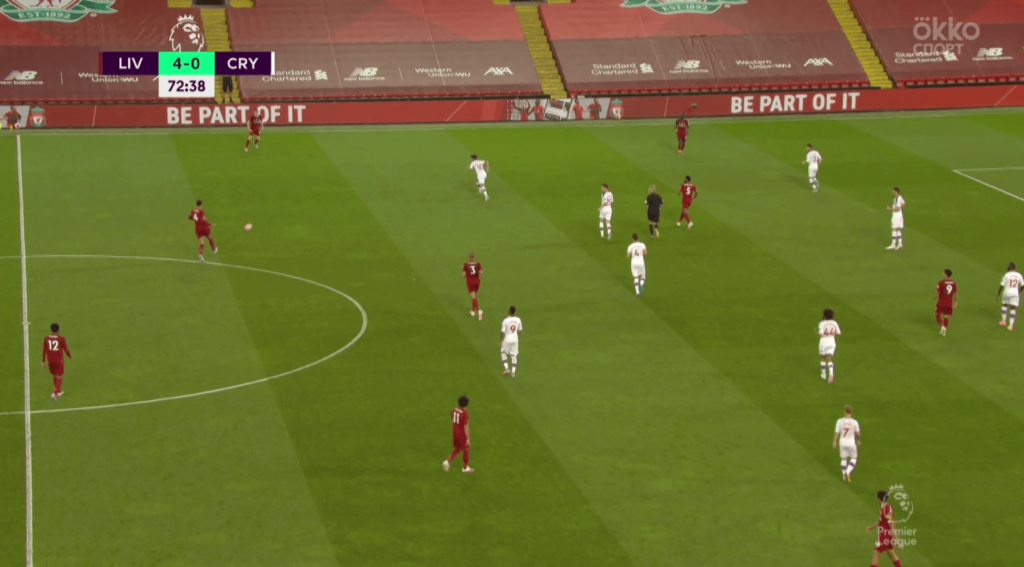 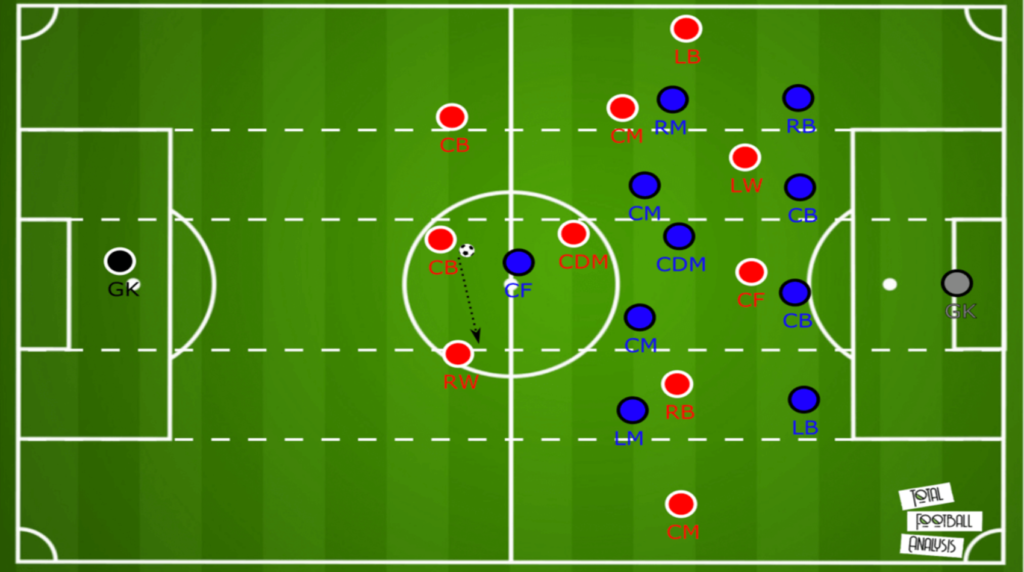 This balanced occupation of zones, combined with the activity of Liverpool between the midfield and defensive lines of Crystal Palace foreshadowed complete inability of the Eagles to somehow intervene in Liverpool’s attacking flow.

Hence, the attacking tactics of Liverpool were more risky and dominant in general compared to other games, with Henderson playing between Palace’s midfield and defensive lines a lot during the build-up phase, and occasionally making runs in behind Sakho and Cahill. With the low chances of Crystal Palace creating something meaningful out of Liverpool’s loose ball, there was hardly any need for the captain to provide cover for Alexander-Arnold. Crystal Palace’s horrendous PPDA of 57,2 against Liverpool’s 8,1 illustrates pretty well that the Reds didn’t have any problem with the opposition’s defensive organisation whatsoever. 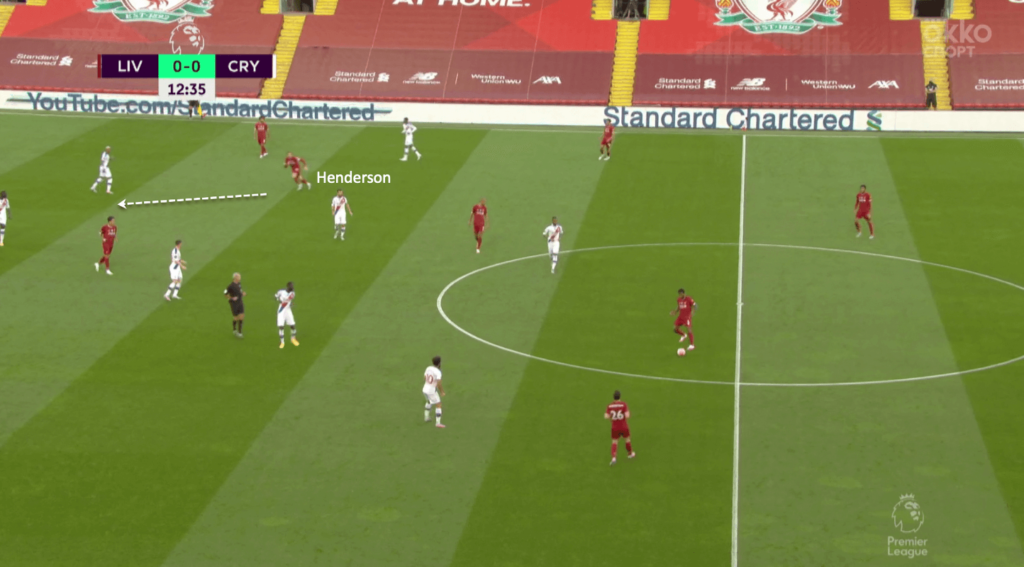 In the next section of this analysis, I will prolong on defensive troubles of the visitors and why having a lot of players defending didn’t help them much from conceding four unanswered goals.

Crystal Palace defended in 4-5-1 medium block for the whole game. The goal was to create superiorities against the opposition wingers and full-backs, with wide midfielders drifting wide and marking either a full-back or winger, helping Van Aanholt and Ward to avoid isolation. Below you can see the defensive shape of the visitors that remained untouched for the whole game, even when it was obvious that it didn’t work. 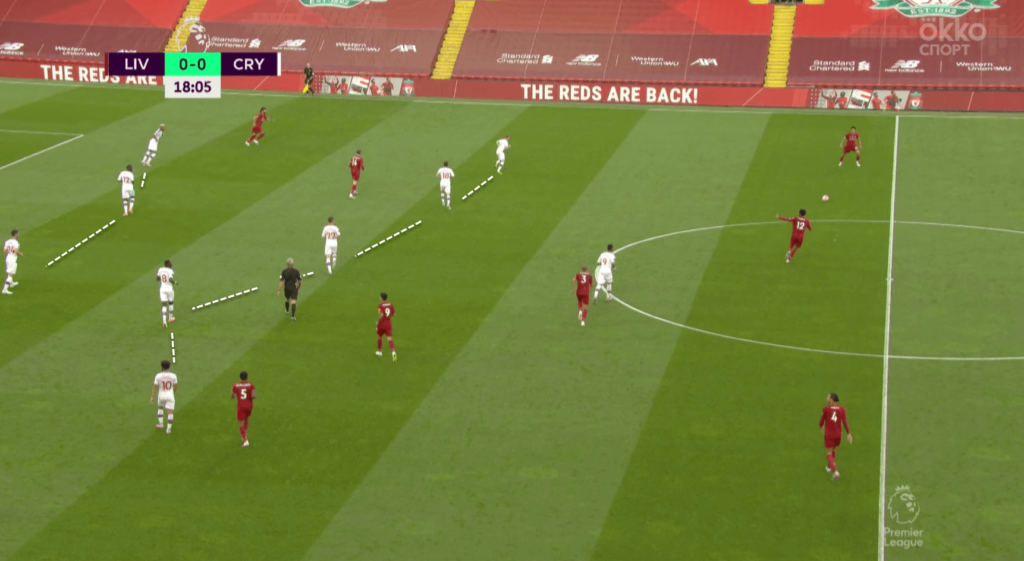 Crystal Palace were playing pretty compact defensively, leaving the flanks open until the pass arrived in those areas. Here you can see that the defensive shape is narrow, and Henderson was able to get the ball to Salah with no problem. Hence, Salah was positioning wide the whole game, with occasional dropping deep in the second half, and Robertson was playing the same role on the left with Mané driving inside more often. Despite that Meyer and Townsend were tasked with marking Alexander-Arnold and Robertson, them staying too compact for most of the time created enough space for Trent and Andrew to freely deliver the ball into the box from almost every try. 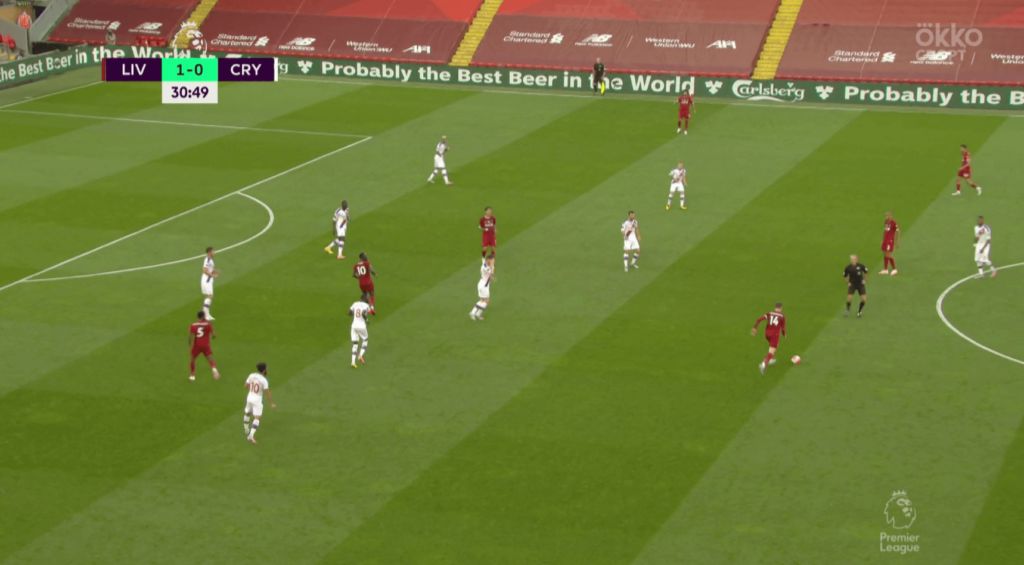 Even though the visitors tried to keep optimal distances between the players, Liverpool attackers freely operated between the lines regardless. In the shot below, Liverpool follow the same rule that we’ve seen in the previous section, with both Alexander-Arnold and Salah in the half-space, and with Henderson out wide. This positioning of players forces Crystal Palace defenders to alter their positions accordingly, which ultimately creates more space between the lines. Here, Meyer has to keep an eye on Henderson, while Van Aanholt guards Salah and is ready to jump at Henderson if he receives in a more advanced position. At the same time, McArthur jumps at Alexander-Arnold, because the latter has too much space, and that leaves Salah open in between those three players despite visitors’ best tries to prevent that. Both Salah and Henderson are free to receive and would have enough time to pick the next pass before the opponent pressures them. 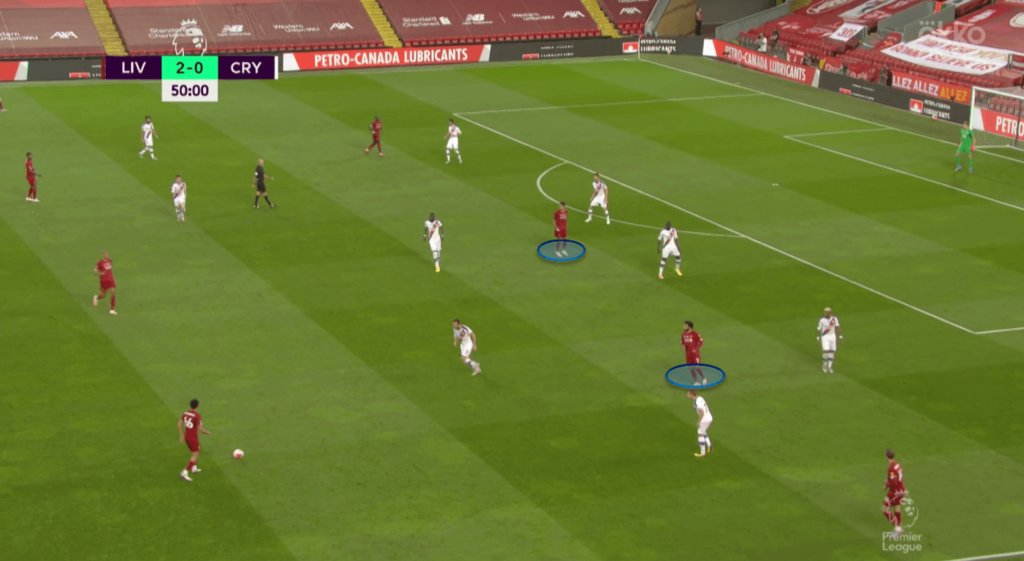 With Liverpool mostly in possession, the defenders were unable to track the movement of attackers for the whole game, and timely runs in behind from wingers resulted in two goals for Liverpool. Firstly, the well-timed run from Salah in behind Van Aanholt and Fabihno’s great pass contributed to Egyptian’s easy finish. In the second half, the pair of Crystal Palace centre-backs haven’t managed to track the movements of Salah and Mané and the wingers combined for the fourth and final goal of the game. 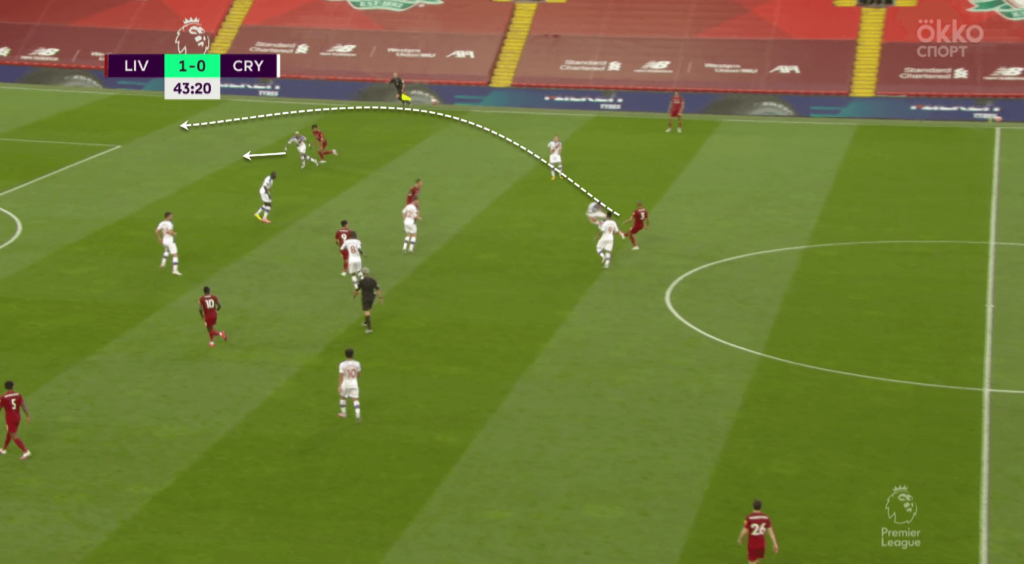 The defensive plan of Crystal Palace, which consisted of having multiple players marking opposing players in the wide areas hasn’t worked out at all, with Liverpool wisely exploiting their defensive shape with the right positioning of the attacking players.

Low-intensity levels and the forced three-month break didn’t help either, with the defending team too slow to react to switches of play and too slow to press the receiving players. Also, the lack of movement and no usage of cover shadows provided Liverpool with a considerable amount of passing options in the final third.

Liverpool, on the other hand, seemed to find their rhythm that they had before the break, moving the ball with great speed and pressing with intensity.

Overall, the attacking structure of the hosts multiplied by bad defending of the visitors throughout the game left Crystal Palace unable to stop Liverpool at all fronts.

At the end of the day, Liverpool recorded an astonishing 73% of possession, while Crystal Palace recorded 27%. From these small bits of time on the ball, the visitors looked to create some chances, even if that would be tries from outside of the penalty area. Their total of three shots were all long shots as they couldn’t progress further due to the lack of options. When in possession, full-backs were staying wide and wide midfielders were tucking in and playing more centrally, with an example in the shot below. McCarthy and McArthur remained central midfielders, while Kouyaté was joining Ayew in the attack. Crystal Palace looked to progress the ball upfield through the passes between the midfielders and full-backs on the flanks. With such players as Zaha and Townsend on the flanks, they still had a chance of progressing the ball if not through their passing, but through the individual ability of those players. However, with Zaha injured after fifteen minutes and Townsend having a small time on the ball, Roy Hodgson’s side looked to create through playing long most of the time. 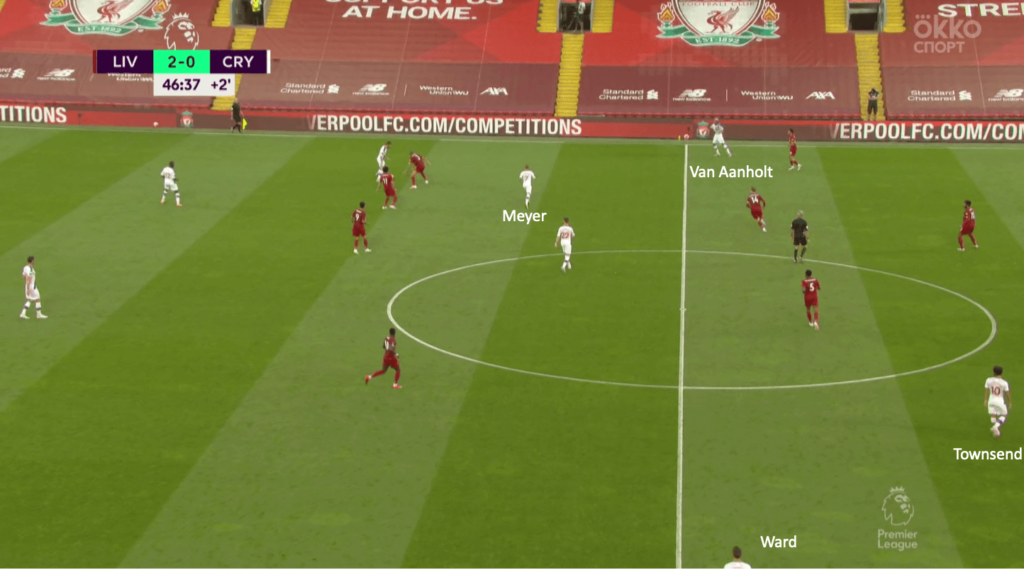 The constant pressure on the ball from Liverpool players forced Crystal Palace to go to Hennessey pretty often, and for a couple of times in this game, goalkeeper’s long deliveries resulted in chances for the Eagles. For example, the shot of Meyer was due to Gomez’s mistake after Hennessey played long. However, as you might expect, this strategy hasn’t created too many chances, and Crystal Palace registered only 0,11 xG overall.

Ayew dropped to the right flank a couple of times to pick up the ball after long passes, and then to keep the ball to give his team some breathing room and continue the attack. The monstrous performance from Fabinho didn’t let the Ghanaian do that too often, stealing him off the ball a handful of times in this game too. 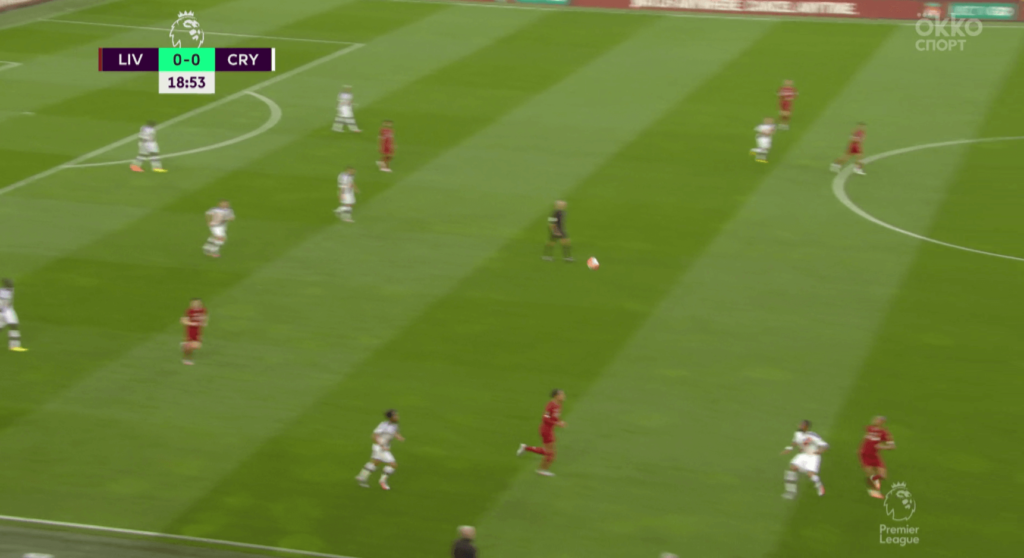 The win on Wednesday got Liverpool one step closer to the title, and now Jürgen Klopp’s men only need two points to guarantee the championship. With Manchester City coming up against Chelsea on Thursday, by the time this analysis comes out we might already know the champion of this campaign, as either a loss or a draw of the Citizens in the upcoming game would end their title hopes.