Football in League Two may be a world away from the glitz and glamour of elite clubs like Liverpool and Chelsea, but it’s still a level that boasts plenty of individual talent. After clubs voted to curtail the season in the wake of the coronavirus crisis, Plymouth Argyle, Crewe Alexandra and Swindon Town were promoted on points per game. Northampton Town will join them after beating Exeter City in the playoff final.

But which individuals really stood out for their teams last season? We’re going to dive deep into the League Two performance data to identify the division’s most creative central midfielders from last season. You’ll be able to gain an insight into which players were able to open up opposition defences in 2019-20, as we use detailed statistics and graphs to bring you a data analysis.

In the analysis, we’ve taken a look at the key metrics that can evaluate how much influence a creative midfielder has had in a game. We’ve used metrics that measure ball progression, attacking threat and attacking output.

In preparing the graphs, we used a filter that excludes players who’ve played less than 1000 minutes. This is because players who’ve had limited minutes have a small sample size of data, which means the numbers can be skewed. For example, a player could have played only one game all season. But if they were outstanding in their only appearance, the chances are they’d be top of a lot of metrics, as they’re calculated either on a per 90 minute or percentage basis. Players of all ages will be displayed on the graphs.

The best creative midfielders have the ability to progress the ball through the thirds. Having a player like this is vital for any team to be able to create chances. We’ve measured who the best ball progressing central midfielders were, by looking at the number of progressive runs they make per 90 minutes, alongside how many progressive passes they averaged.

A pass is considered progressive if the distance between the starting point and the next touch is:

The same applies for a run to be considered progressive, but the starting point is the player’s first touch, and the finishing point is his last touch. 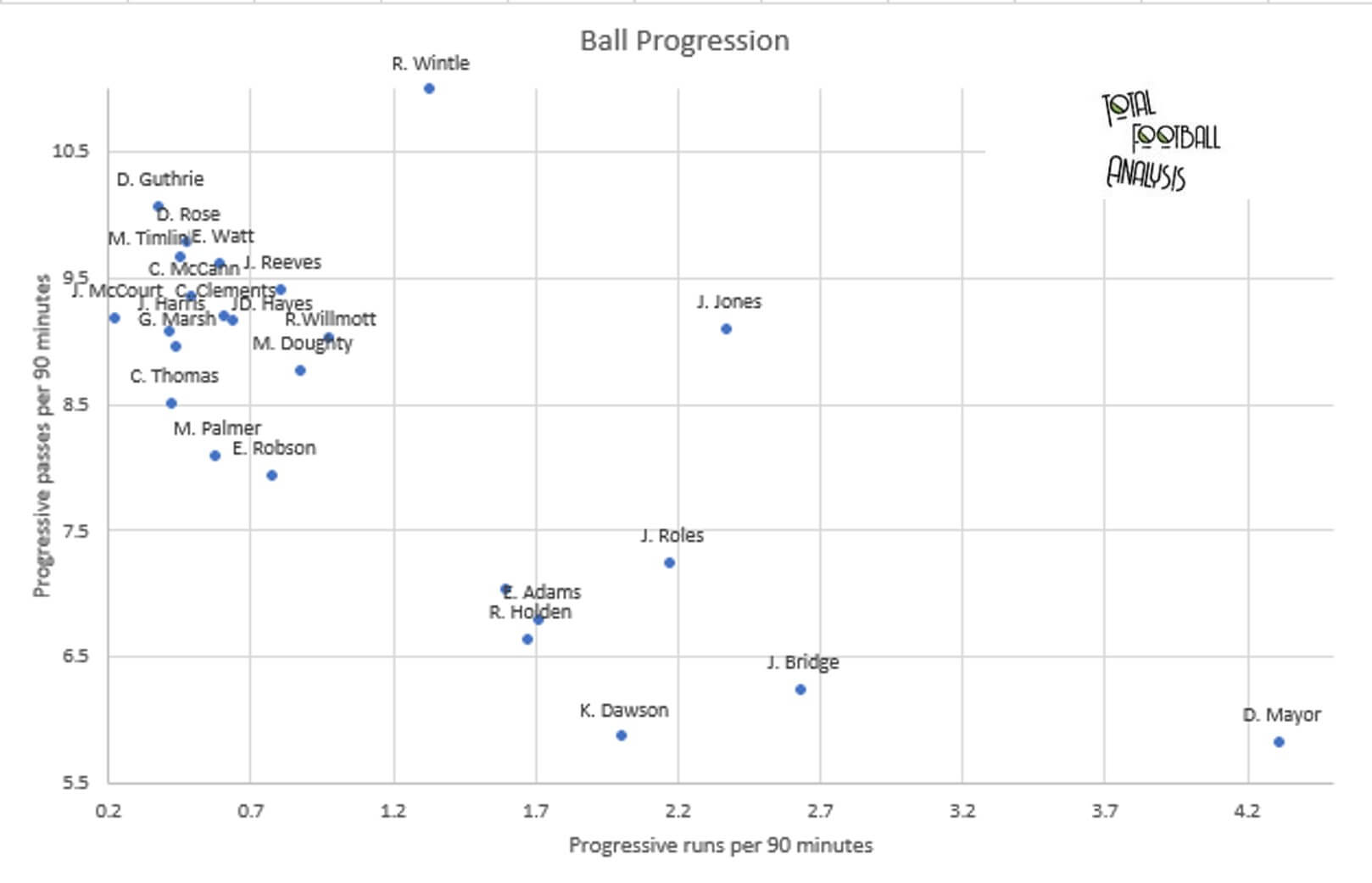 In terms of progressive passing, Crewe Alexandra’s Ryan Wintle stands out. As a holding midfielder, it may be difficult to see him as ‘creative’, but the numbers suggest he was vital in helping to create goalscoring opportunities for the Railwaymen. He averaged a league-high 10.98 progressive passes per 90 minutes and 1.33 progressive runs.

In terms of progression through running, Plymouth’s Danny Mayor stood out here. He averaged a scintillating 4.32 progressive runs per 90 minutes: by far the highest out of all central midfielders in the league. On-loan Carlisle United man Jack Bridge ranked second in that metric, with an average of 2.64.

Next, we looked at which midfielders caused a lot of problems in and around the penalty area. We measured that by looking at who had the most touches in the box per 90 minutes, suggesting that those players are good at timing runs into the area and finding space close to the goal.

Also, we took a look at which players made the deepest completions per game. A deep completion is a non-cross pass that is targeted to the zone within 20 metres of the opponent’s goal. Players who rank highly in this metric are always looking to pick out teammates in dangerous areas. 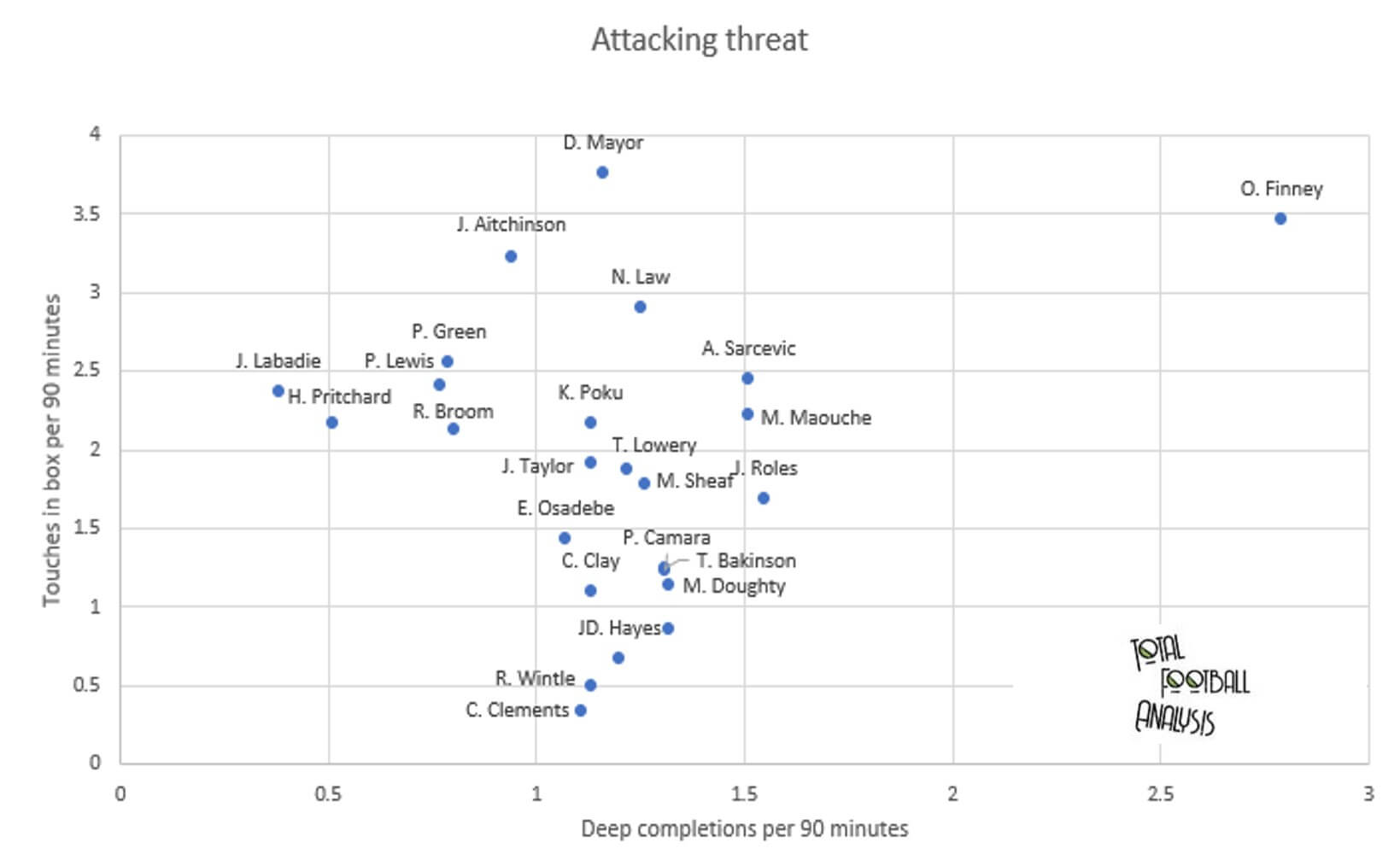 Again, Danny Mayor’s numbers were very impressive. He averaged 2.79 deep completions and 3.47 touches inside the box.

His Plymouth teammate Antoni Sarcevic also showed plenty of creativity for Argyle last season. He averaged 1.51 deep completions and 2.45 touches inside the area.

Elsewhere in Devon, Exeter City’s Nicky Law posted very good numbers in this area, helping the Grecians to a playoff final. He averaged 1.25 deep completions and 2.9 touches in the box.

Finally, we looked at the players who constantly created great opportunities for their teammates by checking out who averaged the most expected assists per 90 minutes. Expected assists work by assigning the xG value of a shot to the player that created that opportunity. Assists on their own can be misleading because a five-yard pass that sets up a 30-yard screamer gets the same amount of credit as a 30-yard pass that sets up a five-yard tap-in.

We also looked at which players average the most expected goals per 90 minutes, to get a sense of who frequently got in good positions to score.

Bradford City’s Harry Pritchard averaged the joint highest expected assists (xA) per 90 minutes with 0.26, but it’s worth noting that he’s played a lot of his football on the left-wing. The same applies to Walsall’s Rory Holden. He averaged the same amount of xA, but those numbers could be skewed by the fact he played a lot of his games as a winger. His fellow Sadler Danny Guthrie also averaged 0.26 xA and 0.04 xG.

In terms of xG per 90 minutes, once again we see Finney and Sarcevic leading the way. The Crewe man averaged 0.34 xG, whilst Sarcevic posted an average of 0.31.

After using these graphs, we’ve made a shortlist of the players who stood out. We took a couple of metrics that we’ve already looked at and added in some new ones.

To make it easy to see how each player ranks in each metric, we used percentile rankings. This gives each player a ranking from 0-99, based on how they’ve performed in that metric compared to other players in their position. Each score is a percentage rounded to the nearest whole number. For example, first on the shortlist is Plymouth’s Danny Mayor. 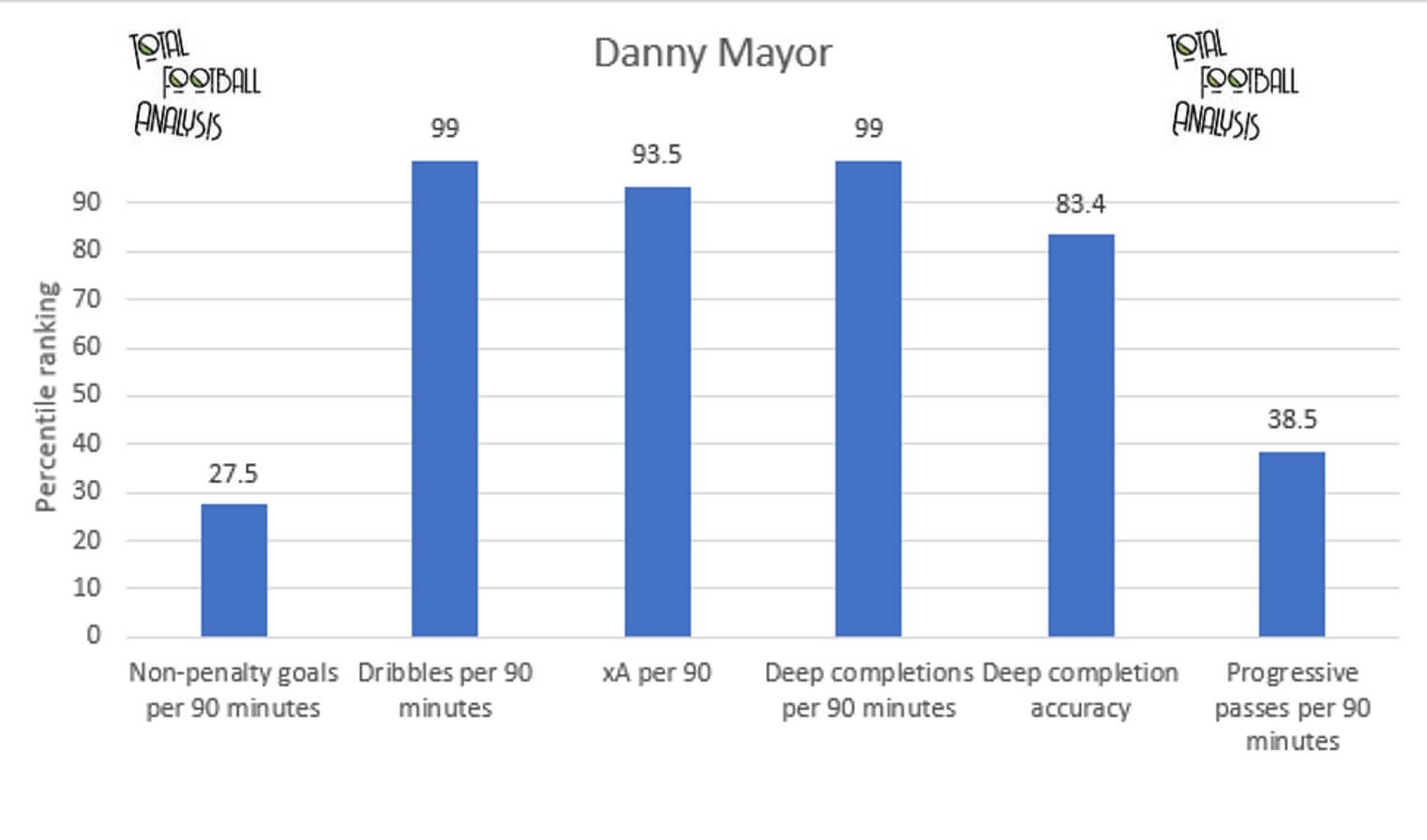 He played the deepest completions per 90 minutes out of all central midfielders in the league, so his ranking for this metric is 99. This means he scored higher than the other 99% of central midfielders for this statistic. Basically, the higher the bar, the higher the score. This is a quick and simple way of measuring how well a player has performed, statistically speaking, in each area.

You can see that, as well as scoring high in deep completions, he also attempts the most dribbles. He’s also creating plenty of chances, as his xA per 90 minutes is well up there with the best in the league. Mayor’s number of non-penalty goals per 90 minutes is pretty low, suggesting that he prefers to be the man to set chances up rather than to be on the end of them. 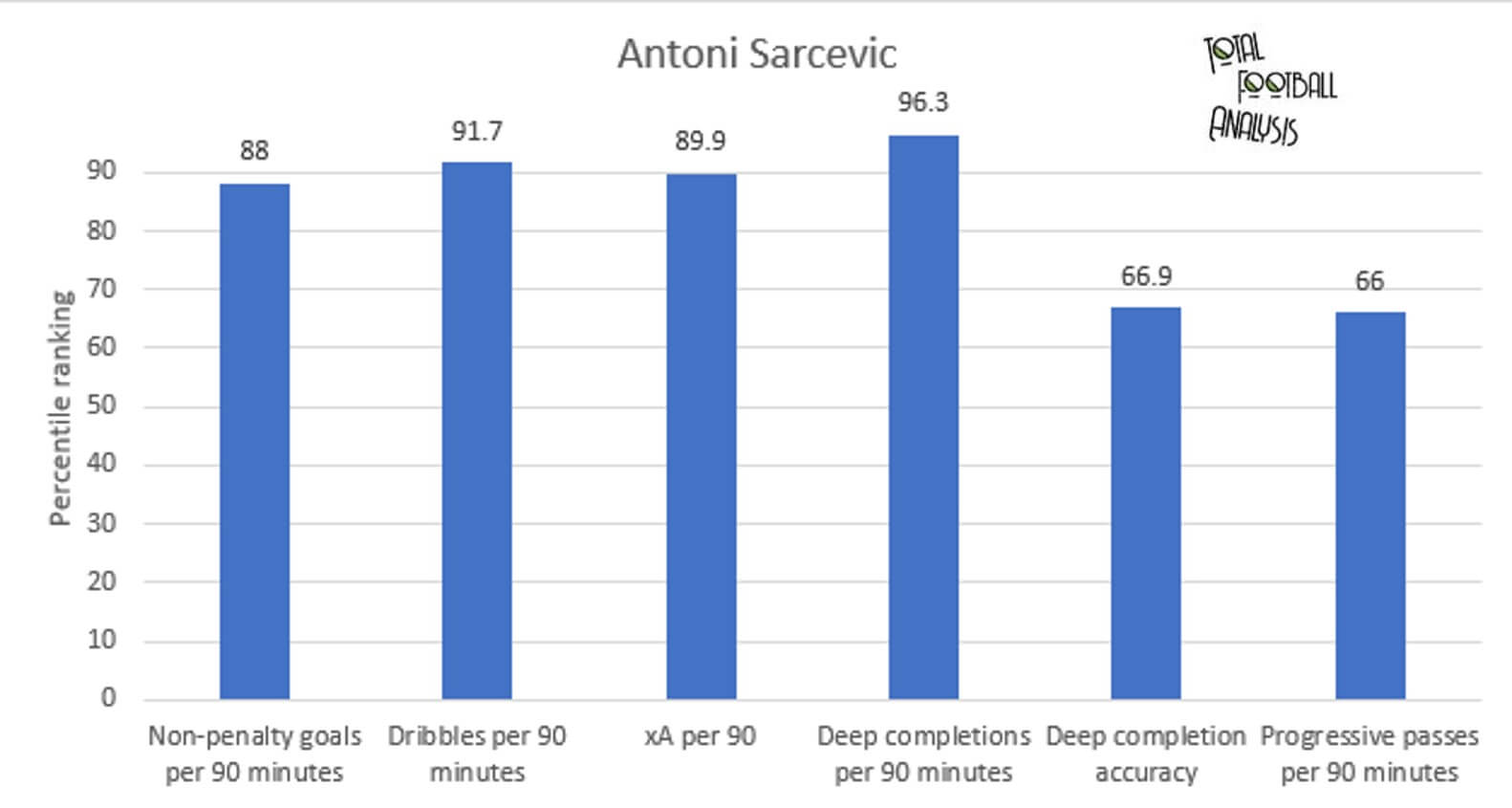 Mayor’s teammate Antoni Sarcevic posted some quite frankly ridiculous creative numbers last term. He ranked in the top 12% in the league for non-penalty goals (0.19), dribbles (4.15), xA (0.15) and deep completions (1.51). The accuracy of his deep completions and number of progressive passes were also comfortably above the league average.

Ryan Lowe led Plymouth to promotion last term, so both of these players will be playing at a higher level next season. Judging by those numbers, they should have no problem making the step up.

Another team who earned promotion were Crewe Alexandra, and two of their players complete the shortlist. 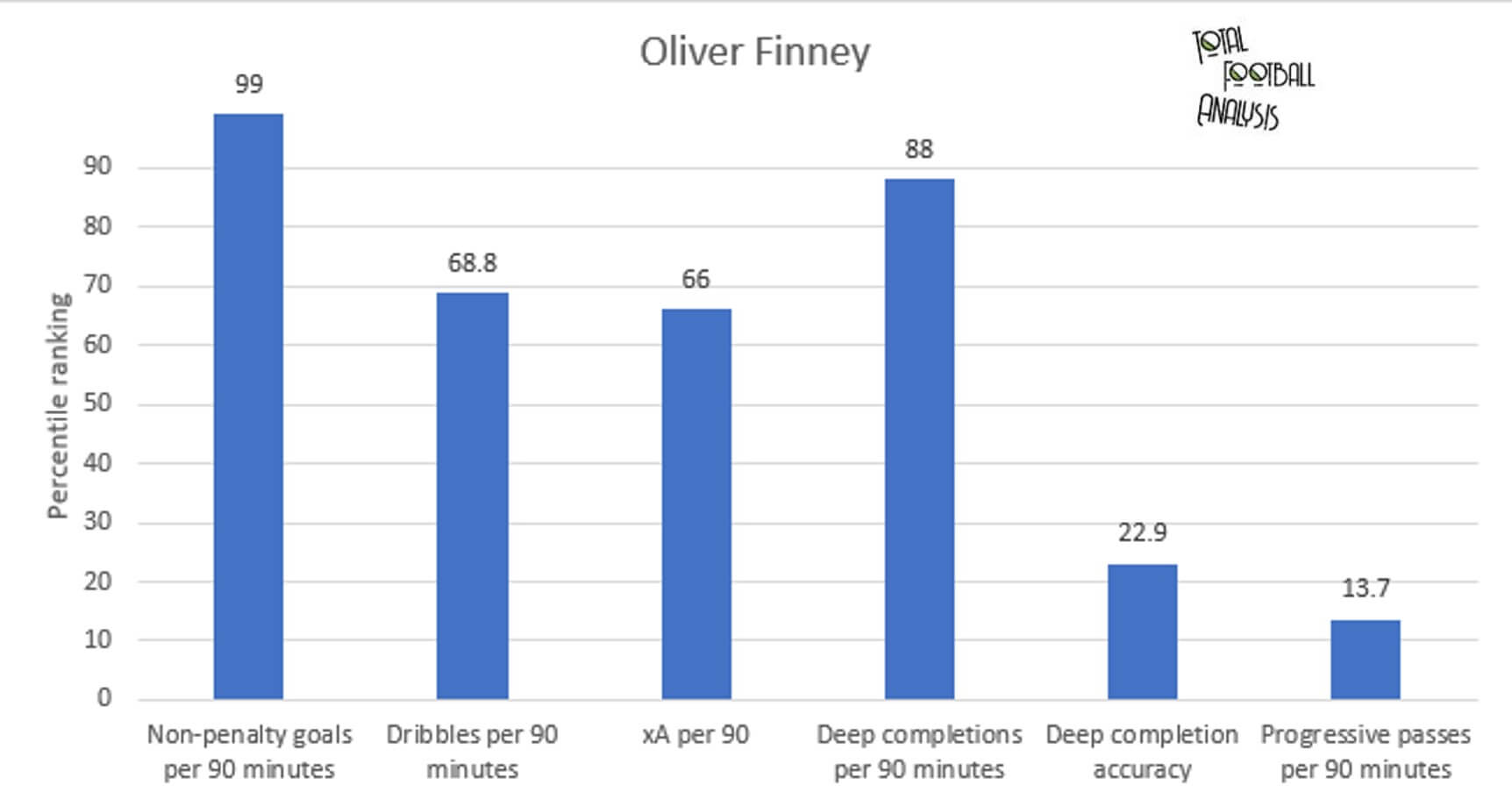 Oliver Finney only made 11 starts for the Alex, but he was very impressive when he did play. He’s got the best non-penalty strike rate out of all players in his position, after scoring five goals in 1,005 minutes of football. That’s 0.45 goals per 90 minutes. 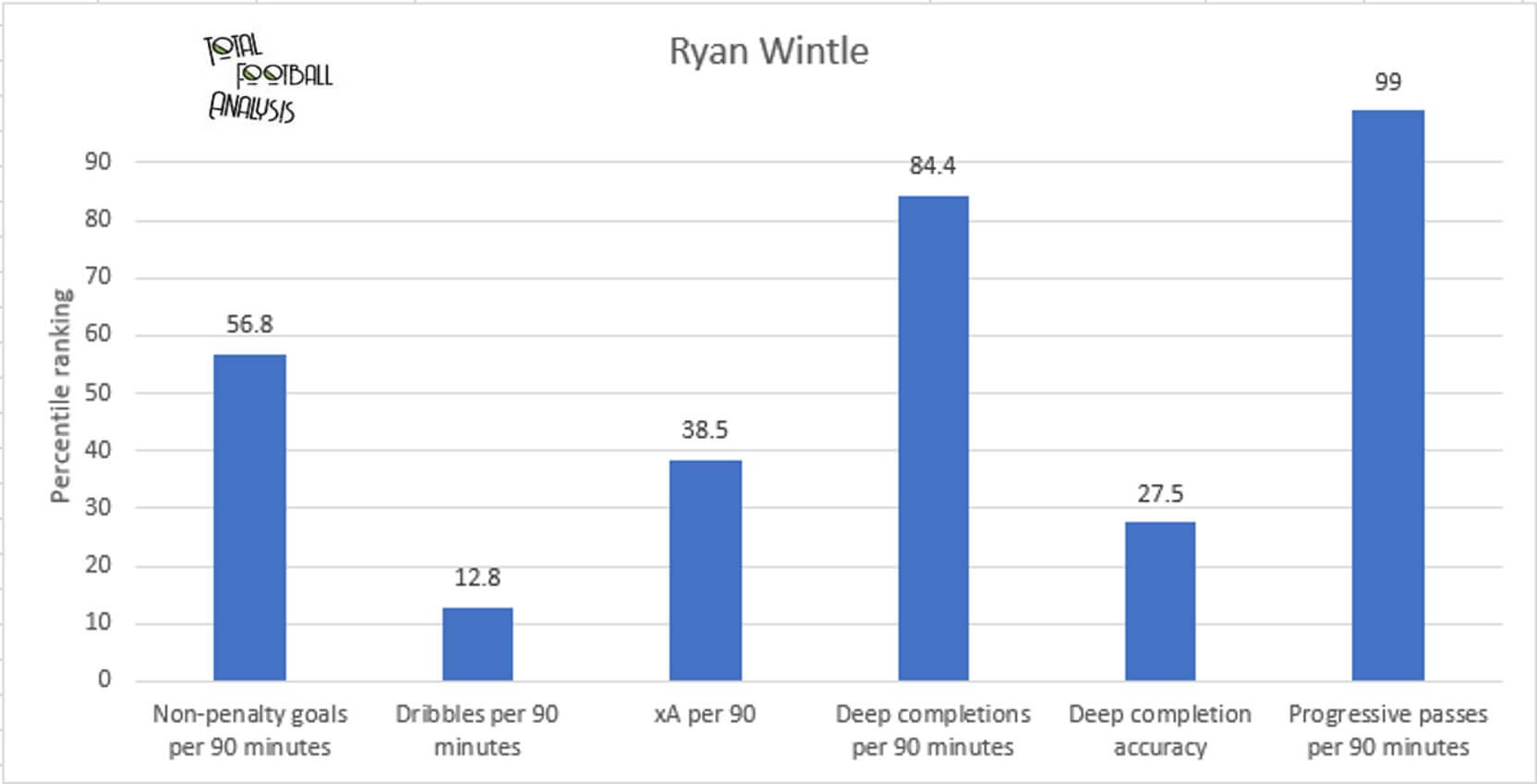 His teammate Ryan Wintle may not score highly in the metrics geared towards final third contribution, but he’s been included because of his fantastic progressive passing numbers. He’s the odd one out here: Wintle is a sitting midfielder rather than someone who looks to break into the final third. But the quality of his passing from deeper areas has been so vital for a Crewe side who like to build attacks from the back.

The fourth tier of English football may not be the most-watched division, but it certainly is home to plenty of talent. The players we profiled in depth all earned promotion to the third tier, so it’ll be fascinating to see if they can perform at a higher level in the 2020-21 campaign.