Both sides came into this game amid their own issues and concerns. Roma, despite enjoying a relatively steady start, were dealing with an inconvenient injury crisis. Milan, on the other hand, were still stuck in their very own whirlwind with new manager Stefano Pioli already facing immense pressure from the fans, despite only being in charge for a single game before this one.

Before the game, Roma were on a three-match unbeaten run after suffering only a solitary loss to Atalanta in Serie A so far. In stark contrast, Milan were proving to be a team much easier to beat after losing four of their opening eight games. This form had already resulted in Marco Giampaolo losing his job at the San Siro prior to Pioli’s arrival in early October. In desperate need of some momentum and positive results, Milan once again faltered to another loss against a strung-together Roma side.

This tactical analysis will detail how this Roma side doomed Milan to another defeat in this season’s Serie A. Our analysis will evaluate and illustrate the tactics on display in this game and provide a precise summary of how this game played out.

Amidst all the injuries to defensive midfielders like Lorenzo Pellegrini, Amadou Diawara, and Bryan Cristante, the usual centre-back Gianluca Mancini was given the nod to hold down the position going into this match. Alongside this, Fonseca made four other changes to the starting XI that laboured to a 0-0 away at Sampdoria. Edin Džeko reclaimed his spot up-front from Nikola Kalinić, and there were also starts for the likes of Javier Pastore, Federico Fazio and Diego Perotti. These changes also meant a change in formation, as Roma lined up in a 4-3-3 shape.

Looking at Milan’s team, it’s easy to see why some of the fans are already so displeased with Pioli. Last season’s sensational striker, Krzysztof Piątek, was again amongst the subs bench along with summer signing, Ante Rebić. After stumbling to a 2-2 draw away at Lecce last week, Piolo stuck to the exact same lineup he did in that game, with his team matching Roma’s 4-3-3 formation. 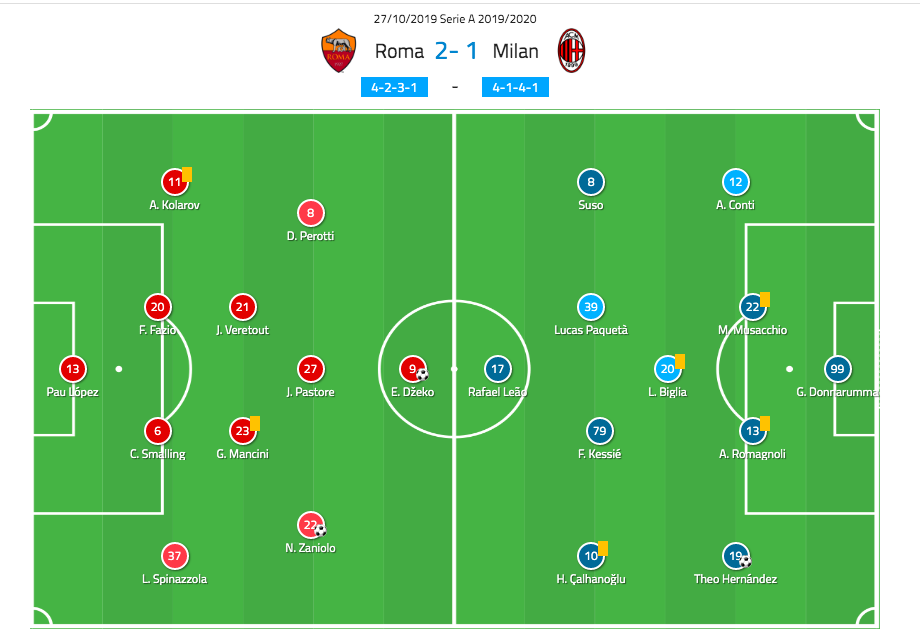 Pioli’s side demonstrated a rather token effort when it came to pressing the opposition. Despite pressing from the front with their three-pronged attack, Milan were unable to prevent Roma from escaping under the pressure.

By doing this, Roma’s full-backs were free to stretch the pitch and advance forward. This was because with Roma utilising Mancini to create an overload deeper on the pitch, Milan had to bring in their wingers to assist Rafael Leão pressing the centre-backs.

With Roma’s midfield now easily accountable for Milan’s own midfield trio in a three v two situation, Milan’s full-backs should’ve been more aggressive in their positioning in an attempt to match the pressure of their forward line. Since they were unable to, however, Roma could simply loft an out-ball to their full-backs to escape the pressure and drive up the field.

Milan unable to unbalance the opposition

This made all of Milan’s pressure rather redundant and meant that they struggled to win the ball in Roma’s half. This limited Milan’s opportunities to attack an unbalanced and underloaded Roma defence, meaning Milan had to work even harder to create quality scoring chances.

It was also notable the reaction of most of the midfield upon any turnover of possession. On occasions where Milan won back possession of the ball in or around their opponent’s half, there was a distinct lack of urgency from Milan’s midfield trio to support the attack.

This left Milan’s attack underloaded against the opposing defence as Roma’s midfield more often than not were able to recover quicker than the likes of Lukas Paquetá or Franck Kessie, and would burst forward to overlap the attack.

Life is always more difficult for the offence that can’t unbalance the defence and create an advantageous position either numerically or spatially. Without the support of their midfield, the attacking trio of Hakan Çalhanoğlu, Leao and Suso were often outnumbered and limited in the space they could work in. It was only thanks to some good work from Hernandez after a throw-in that Milan were able to profit from one of their twelve shots from the game in a rather flaccid display.

Despite the aforementioned freedom of Roma’s full-backs, one would assume that this allowed Roma’s wide men on the day, Perotti and Zaniola to occupy the centre of the pitch in an impactful way. This wasn’t the case.

Roma struggled to generate dangerous plays in the central areas just outside Milan’s penalty area. Zaniola and Perotti failed to make an impact on the game in the central areas in the final third, mostly because of their poor combinations with Pastore’s movement. All three players were guilty of making uninspired decisions and movements that made little sense toward improving the chances of their attack.

Because of this, Roma were unable to effectively and consistently disrupt and disturb the Milan defence on regular occasions. Roma were fortunate enough, however, to carve out their goals thanks to the result of a set-piece and a lucky deflection into Zaniola’s path on a breakaway. This cannot be considered to be a sustainable source of goals.

Roma were clearly keen to cut out the threat of Milan’s own full-backs, specifically Theo Hernandez. Even though Milan rarely used Biglia to split their own centre-backs in the way Mancini did for Roma, the home side still adopted a 4-4-2 shape when out of possession to defend against their opponents.

By pushing Pastore forward alongside Džeko, Roma could afford to drop Zaniola deeper on the wings and free him to track Hernandez. This same move also removed Pastore from defending an important central area of the pitch where the Argentine could easily be exploited by the more powerful ball-carriers on the other team, such as Kessie.

The issue this created, however, was leaving the centre of Roma’s defensive shape free to be exploited via a numerical overload. To combat this, Zaniola’s positioning became narrower and narrower as the play moved downfield, thus leaving Hernandez open in space in the final third.

This was the unfortunate consequence of having to start with Pastore in midfield. For all the creativity he brings to the side, he is limited in a defensive capacity and those, like Zaniola, are forced into ill-suited defensive roles.

One reason for Milan’s disjointed pressing approach was Zaniola’s positioning during Roma’s early possession buildup. In order to free up the space for Spinazzola to progress forwards and offer his side the out-ball, Zaniola had to push up higher earlier on in possession. At times, Zaniola was pushed up alongside Džeko in order to give Hernandez a choice as to whether he could risk pushing forward to attack Spinazzola.

Outside of this specific role, Zaniola’s influence further up the pitch dwindled as his specific duties became less defined. Perotti’s and Pastore’s movements in between the opposition’s lines and Spinazzola’s dominance down the flank left Zaniola without a clear role in this attack. As such, Zaniola’s movements varied in effectiveness and motive as the youngster sought to assert himself on the game. I feel this was reflected in his poor passing display in this game.

The majority of Zaniola’s rather minimal amount of passes all came from either deep or wide areas, and rarely threatened the opposition’s defensive shape.

Zaniola was bright for his goal, however, reacting quickly to the turnover of possession and taking devastating advantage of the deflection that fell his way, scoring the eventual winner.

This was a relatively poor showing from both teams who strained toward producing rather blunt offensive performances. Roma perhaps earn themselves a pass after ultimately getting the win after having to improvise a starting eleven and formation after their injury and suspension woes.

Milan on the other hand, look like very much the same beast from before. The players’ application clearly isn’t at the level it needs to be and with the manager’s long-term future at the club already in question, I don’t see that changing too much. Piatek looks a shell of his former self, managing only three shots in his last four games for Milan.

Systematically, the whole Milan side appear uninspired and if this ill-will around the side is to continue, their season prospects will only further dwindle as at the moment, the side is actively regressing.