Borussia Monchengladbach welcomed Eintracht Frankfurt to the Borussia-Park on Sunday for a game which would have seen Frankfurt leapfrog their rivals in the league should they have upset the odds and got an impressive away victory. However, Mönchengladbach continued their excellent form this season and recorded a 4-2 victory, putting them at the top of the Bundesliga with 19 points from their first 9 games. This tactical analysis gives an in-depth analysis of the tactics used by both teams in this Bundesliga fixture.

There were no particular surprises as Marco Rose fielded a 4-2-3-1 formation. Breel Embolo lead the line, with Marcus Thuram and Patrick Hermann playing as attacking wingers either side of him. Denis Zakaria, Florian Neuhaus, and László Bénes operated as a central-midfield three, with Bénes typically sitting in front of his two teammates. In defence, Nico Elvedi partnered Tony Jantschke, whilst Oscar Wendt and the ever-impressive Stefan Lainer occupied the full-back positions.

In the second half, Mönchengladbach allowed Thuram and Hermann to play higher changing their 4-2-3-1 to a 4-3-3.

Adi Hütter fielded a 3-5-2, looking to use his wing-backs, Danny da Costa and Filip Kostić, to provide the width in attack, whilst also contribute heavily defensively. With Bas Dost out injured, Gonçalo Paciência and Daichi Kamada partnered one another, and Djibril Sow was given the nod in the middle alongside Sebastian Rode and Gelson Fernandes. 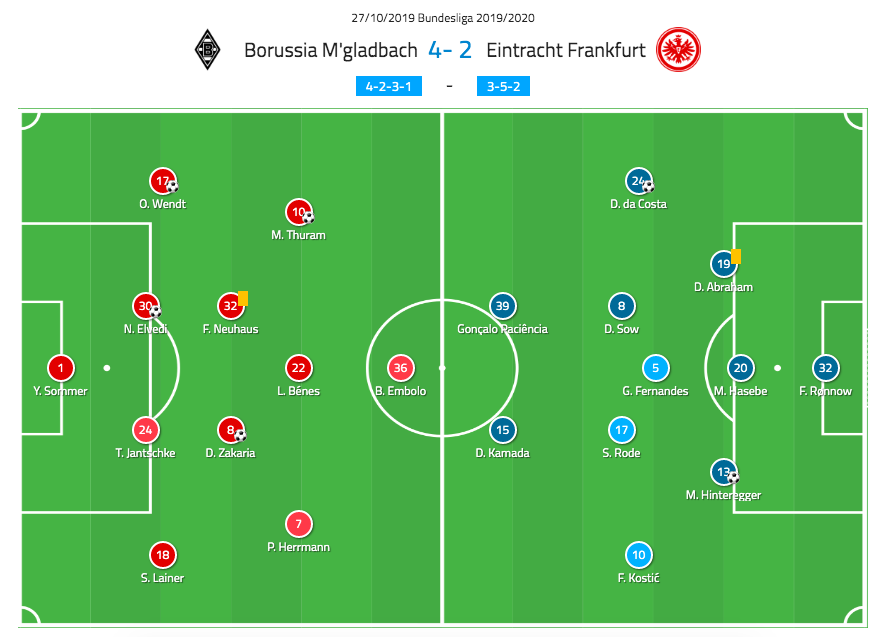 Despite Frankfurt ending the game with a greater share of possession, Mönchengladbach dominated the first half, particularly in the first 15 minutes. However, this was as much to do with their patient buildup play, as it was Frankfurt’s desire to play a lot of long balls, to begin with. In fact, 26% of Frankfurt’s passes in this first period were long balls. 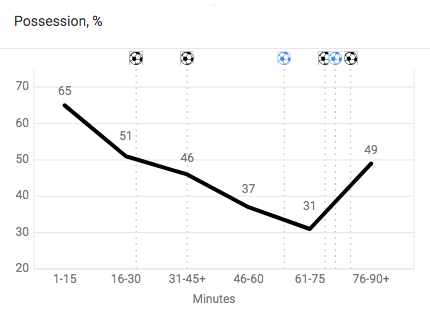 The pass map below shows how the home side favoured using the left-flank in their attacking approaches, and we are able to see that left-back Wendt was key for Mönchengladbach’s attacking approach. Three of their top four pass chains from the game involved the left-back.

Both Lainer and Wendt were regular outlets for Borussia and when the hosts were beginning their buildup play on the opposite flank, the full-backs pushed high to act as an attacking outlet option should they look for a quick switch of play.

Their high positioning throughout the day meant Mönchengladbach’s wingers, Hermann and Thuram, were able to push inside should they so wish, and operate in the half-spaces. Their high positioning naturally meant Frankfurt had to drop deeper as a defensive unit to protect their back four when Thuram and Hermann played closer to Embolo.

Both centre-backs were encouraged to play high and wide themselves when in attack, as Zakaria dropped deep to offer support centrally should Mönchengladbach turn the ball over and face a quick counter. Both wing-backs were able to join Bénes and Neuhaus in taking advanced positions and creating an overload whilst creating gaps as Frankfurt’s defence were stretched to deal with Mönchengladbach’s attacking numbers.

Mönchengladbach were able to create plenty of attacking chances, and regularly penetrate the Frankfurt defence in high-percentage shooting areas. The vast majority of their shots came from within Frankfurt’s box, managing to get 58.33% of their shots on target.

From central areas, Mönchengladbach were equally as dangerous. All of their buildup play began with the two centre-backs splitting wide, Lainer and Wendt pushing high, and Zakaria operating in a deep central area as a passing option. 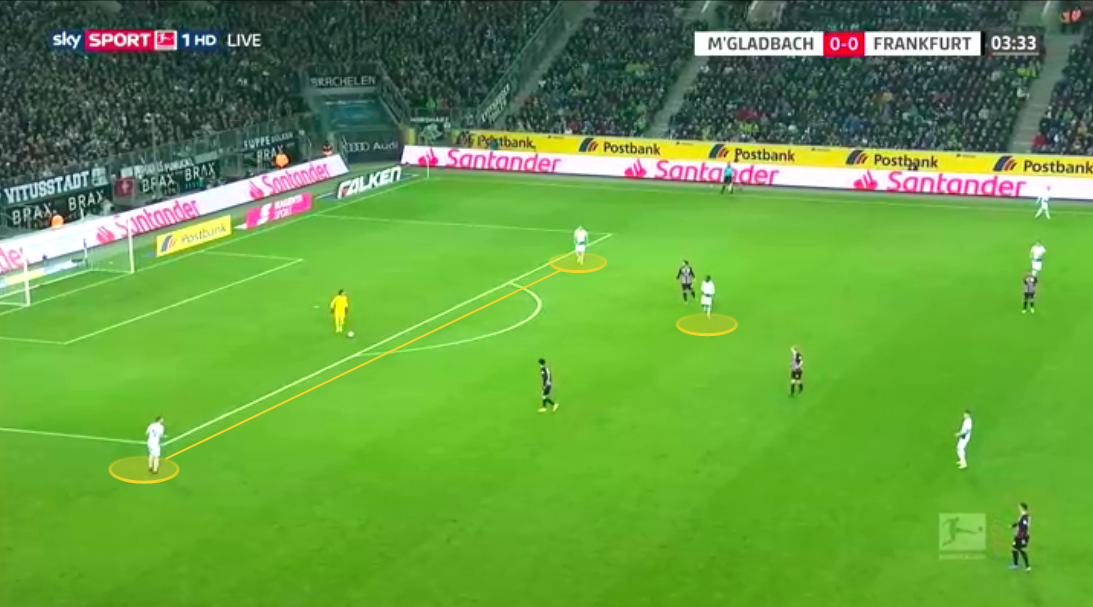 This system worked beautifully for the home side throughout the game. Zakaria was able to drop in and receive, help dictate the tempo, but his positioning also opened up plenty of space to play directly into Embolo.

Rose used his two other central midfielders, Neuhaus and Bénes to push high when Zakaria dropped. They moved in areas closer to Embolo to offer support.

With the ball down one side, one of the centre-midfielders dropped deeper to support as an extra option, albeit still in a far further advanced position than Zakaria, whilst the other, with the ball not on his flank, pushed higher and played tighter to Embolo. Therefore as the ball was played into Embolo, it ensured the forward wasn’t isolated. When the ball reached Embolo, both centre-midfielders had to work hard to move quickly and provide options, as we can see below. 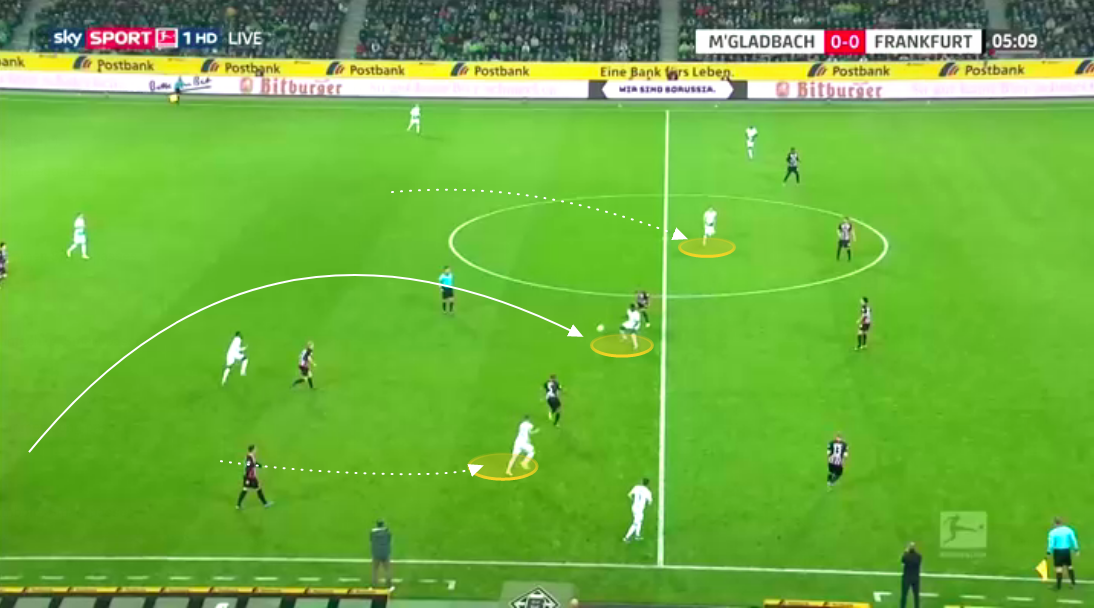 In playing directly into Embolo quickly, it also enabled Mönchengladbach to use the pace of their attacking players to play behind Frankfurt’s defence, who had to play with a higher line due to Embolo’s positioning.

We can see an example of this in the analysis below where, as Embolo receives the direct pass, he has Frankfurt’s last line of defence close to him with plenty of space in behind. A quick interchange with his onrushing teammate, Bénes, and he was played in behind the backline. 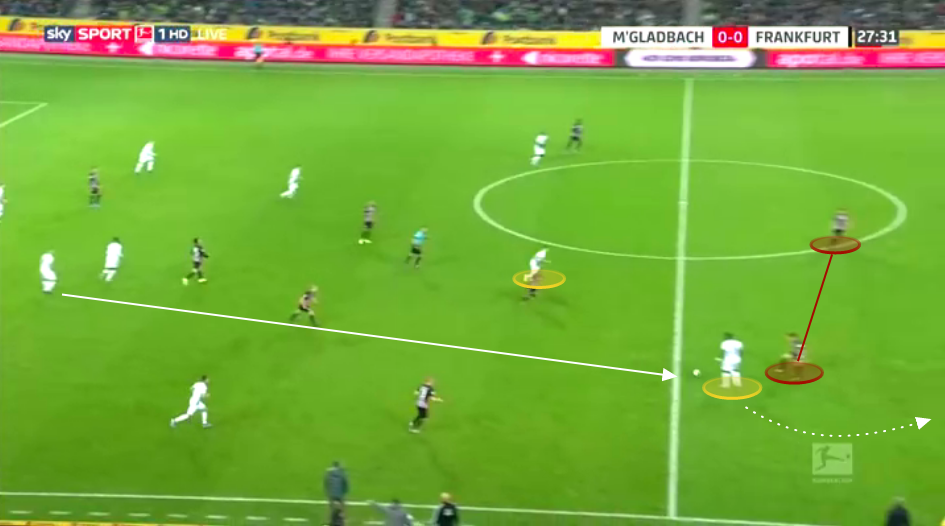 Despite lining up in a 3-5-2 shape, Frankfurt were predictably fluid with their shape in both attack and defence. They generally held a variation of a 4-2-3-1 with Fernandes always playing as the anchor of their shape, and Paciência as the spearhead.

What was particularly interesting though was how Hütter had his wing-backs drop into a full-back position if the ball wasn’t on their side, whilst the wing-back with the ball on his flank would push high and join the midfield.

In the image below we can see Frankfurt defending in their 4-2-3-1 shape with Fernandes and Rode sitting as a deep central two, to protect the central passing channels. 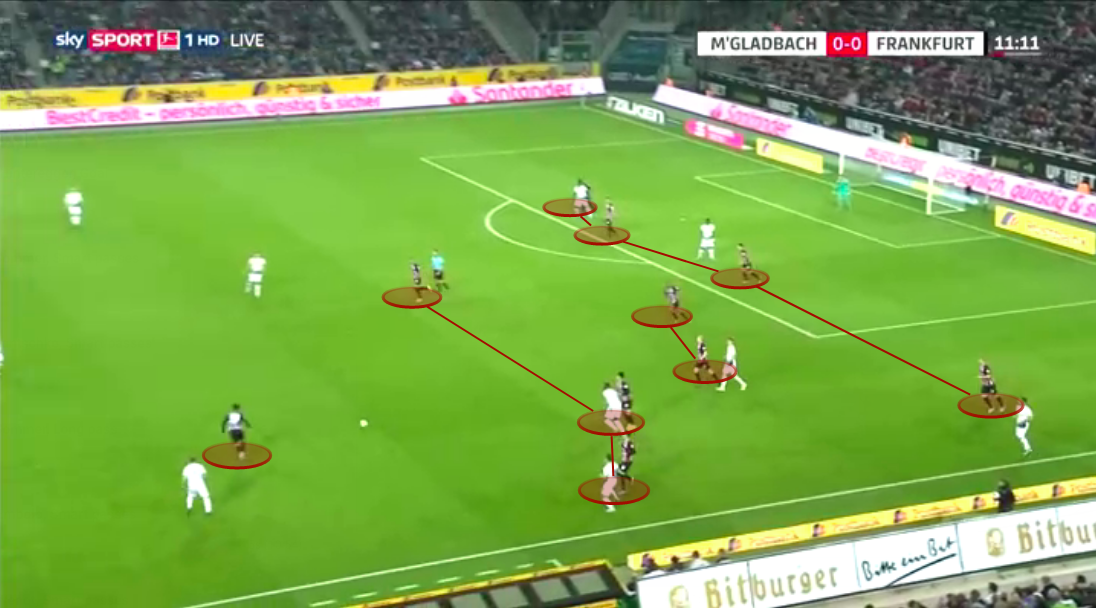 Kostić is forward and playing as part of Frankfurt’s three, however, when the ball is switched to the other flank, Kostić drops back into defence, whilst da Costa, who is currently at right-back pushes into the same position Kostić was just in, however, mirrored on the right-side. 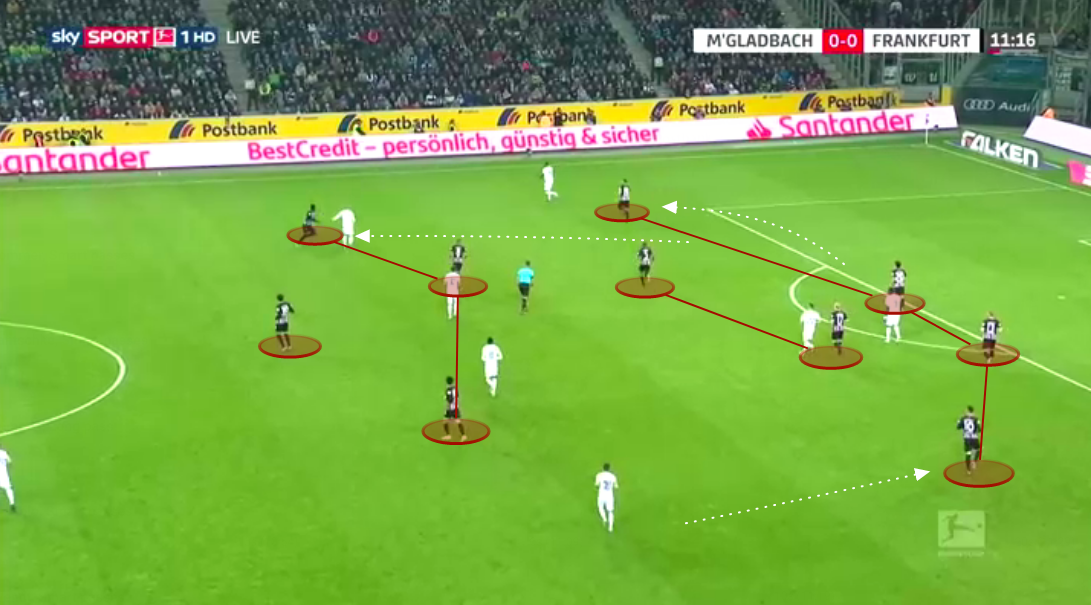 The purpose of this shape was to ensure Frankfurt’s back three were never left in a three-on-three situation with their opponents. It worked reasonably well when Frankfurt were able to defend in a low block, however, Mönchengladbach’s attack were more successful when Frankfurt’s defence had pushed higher, using the space behind them to hurt them.

Unsurprisingly, Frankfurt used their two wing-backs, Kostić and da Costa, in an attempt to get behind a Mönchengladbach defence who had only conceded seven goals from their previous eight league games leading up this fixture. 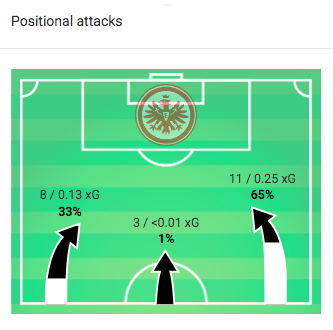 In order to allow Frankfurt to attempt to take full advantage of the pace and skill of their wing-backs, Gelson Fernandes would drop into the Frankfurt backline during their buildup play. This allowed Frankfurt the option to have their three centre-backs play as a back four with Gelson Fernandes acting as a deep playmaker in the heart of it. Hinteregger, and Abraham both took up full-back positions, and this allowed Kostić and da Costa to play as high positioned wingers.

In the image below we can see how both Hinteregger and Abraham have pushed into full-back positions, whilst Gelson Fernandes has dropped into the backline. The two connected players are both da Costa and Kostić, showing how high these two were able to push. 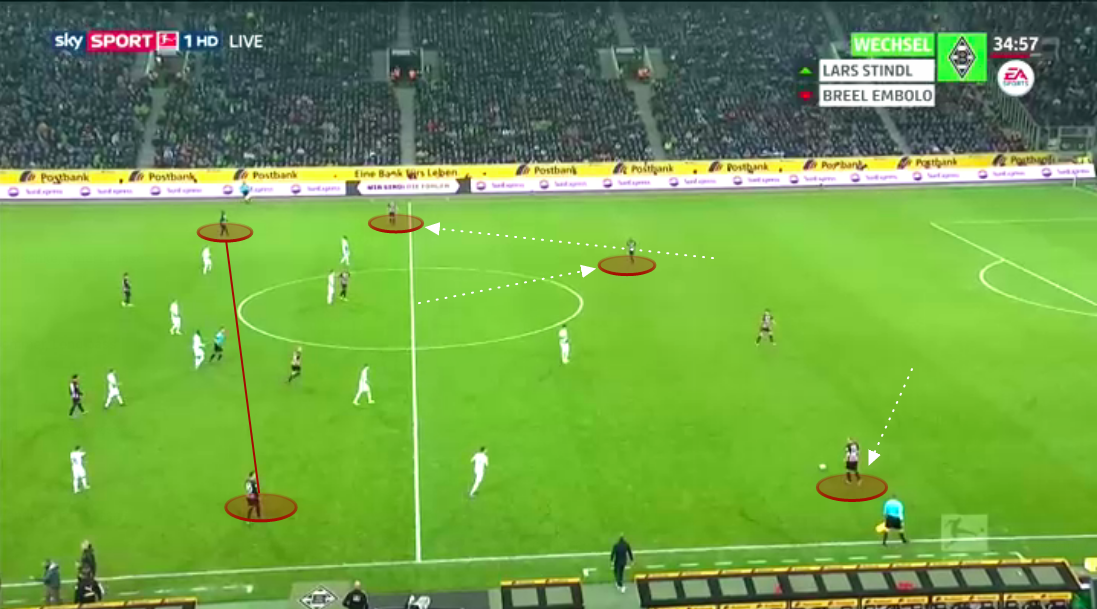 Due to their freedom to push forward, both wing-backs were able to take up intelligent positions where it was hard for them to be effectively picked up as Frankfurt broke forward. Below, da Costa takes up a position in between the lines. Whilst Frankfurt’s attacking players occupy the Mönchengladbach back four, he is able to sit free. 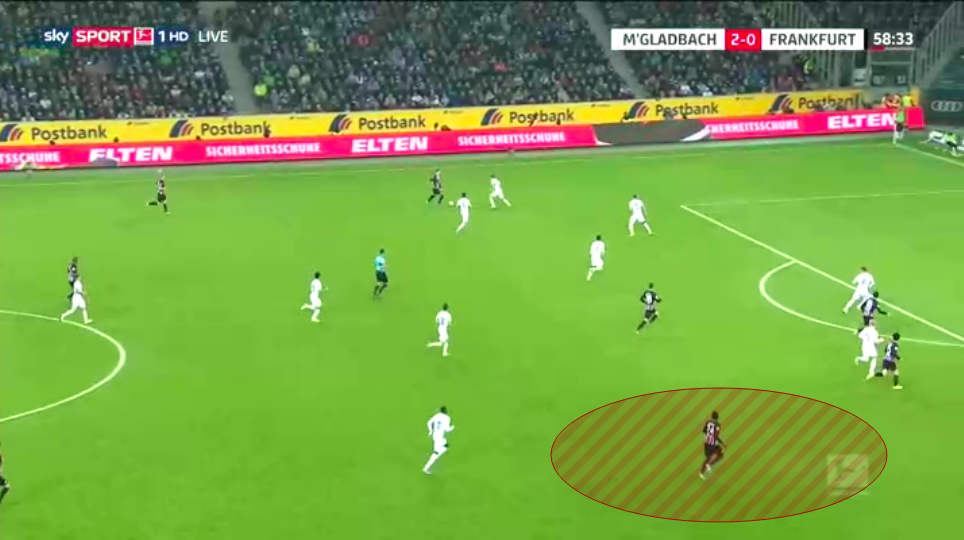 As the cross comes over to his flank, instead of going to the ball he is able to run inside, unmarked, before being picked out for Frankfurt’s first goal of the day. 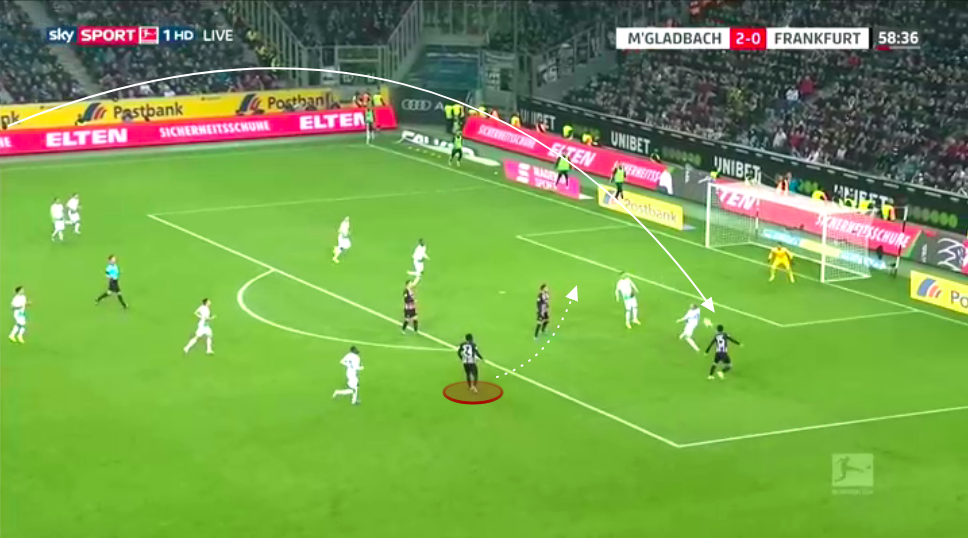 It is no secret that Hütter likes to give his two attacking wing-backs freedom to push forward, and he also encourages them to regularly deliver the ball from wide areas. Both da Costa and Kostić were Frankfurt’s two most prolific crossers in this game, with 16 attempts between the two of them. Overall, Frankfurt managed to complete an impressive 13 crosses from their 27 attempts.

With the top of the Bundesliga table so tight, it was vital for Borussia Mönchengladbach to not only continue to win at home but also to beat a side so close to them in the standings. This win puts them in the driving seat in the league, and with their next league game coming against Bayer Leverkusen, this will be another chance to distance themselves from the crowd.

Frankfurt will be disappointed to have conceded so many and to have scored twice themselves and yet come away with nothing to show. Nevertheless, despite this loss, they are still only five points off of the top of the table and had Frankfurt fans been offered such a position from their first nine games, it is likely they would have taken it.