There was lots to play for on the final day of the 2020/21 Premier League season, with multiple European places up for grabs. Leicester City, Chelsea and Liverpool were fighting it out for the last two Champions League spots while Tottenham, Arsenal and Everton all had a chance of making the newly founded Conference League, with even Leeds United having an outside chance of qualification. Leicester had found themselves in a position where they may miss out on the Champions League on the final day for the second time in two seasons while Spurs were in with a chance of saving their largely inconsistent season. In this tactical analysis, we look at the tactics of both Leicester and Spurs from their fixture and our analysis will show how Spurs managed to sort themselves out in order to snatch a crucial 4-2 victory. 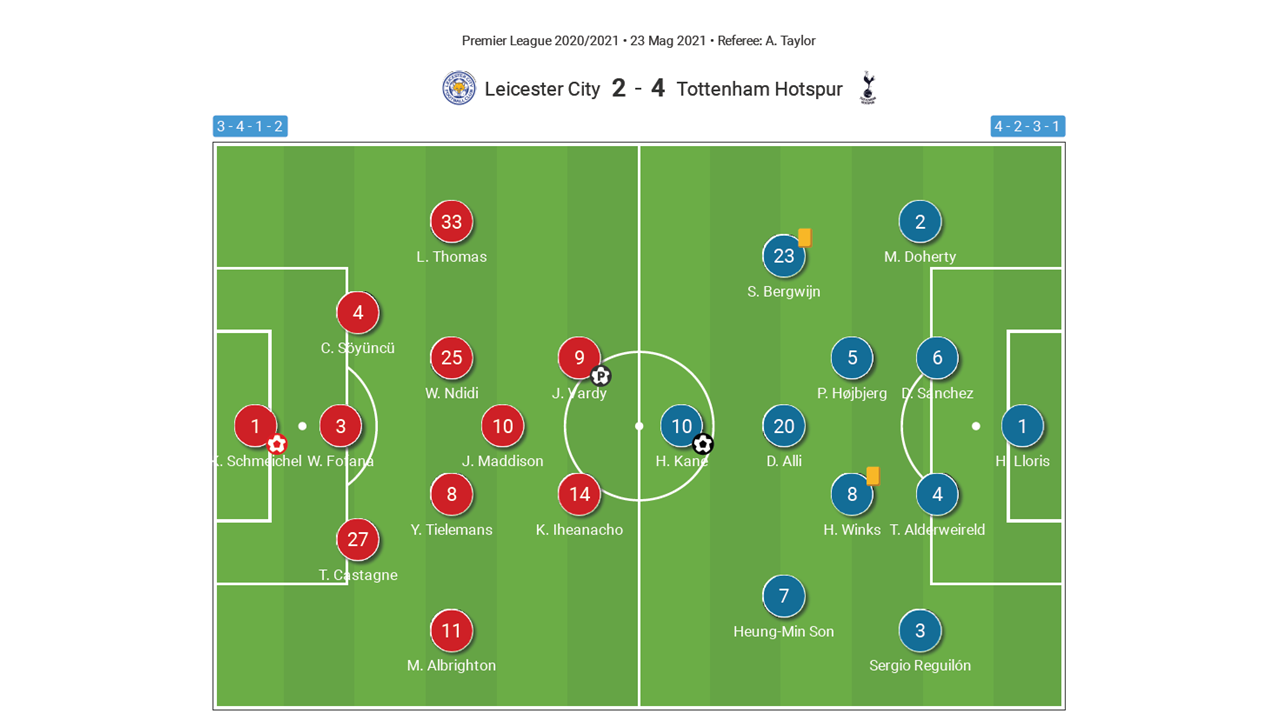 Both sides went with a relatively strong lineup, with the hosts going with their 3-4-1-2 formation. Kelechi Iheanacho and Jamie Vardy led the line with James Maddison lining up behind them. Wilfried Ndidi and Youri Tielemans continued their partnership in central midfield with Luke Thomas and Marc Albrighton playing as the wing-backs. Timothy Castagne continued in his role of right centre-back in the back three, a position that he has had to shift to owing to injury to Jonny Evans, and he started at the back alongside Wesley Fofana and Çağlar Söyüncü. Kasper Schmeichel took up his place between the sticks.

For the vistors, Hugo Lloris took his place in goal behind Matt Doherty, Davidson Sanchez, Toby Alderweireld and Sergio Reguilón. Harry Winks and Pierre-Emile Højbjerg started as the pivots with Dele Alli playing as the attacking midfielder. Heung-Min Son and Steven Bergwijn started down the flanks with Harry Kane leading the line in what could have been his final game in a Spurs shirt. Rumours around his departure have been circulating with Kane himself admitting that he is seeking a new challenge, with moves to Manchester United and Manchester City touted this summer.

Leicester play down the channels 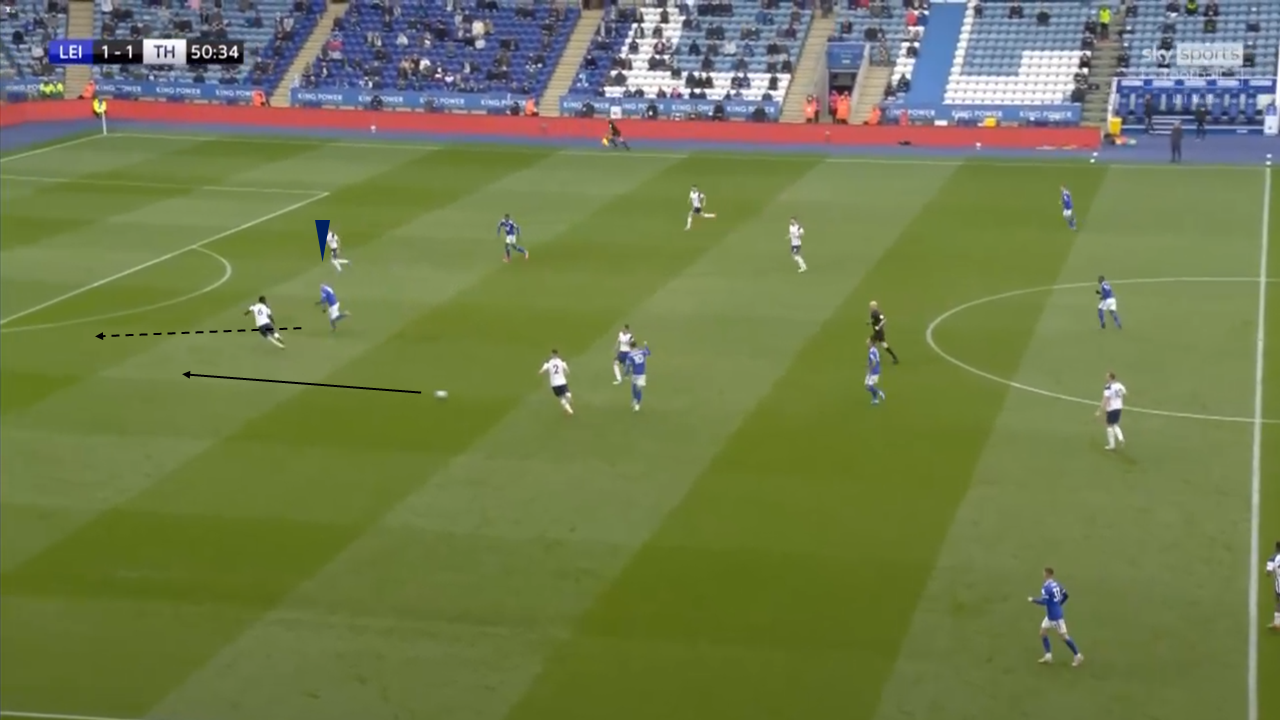 With Vardy and Iheanacho, Leicester’s main way to score was to play in their quick forwards behind the backline and this continued in this fixture. Vardy was the main runner and would dart behind the lines, providing an excellent passing option behind the lines. With Spurs’ full-backs pushing higher up the pitch, his pace into these areas left behind troubled the centre-backs, who knew that they had to deal with the supporting run of Iheanacho as well. Leicester would often look to play through the midfield to their creative players such as Maddison and Tielemans who could then release the forwards into space and this troubled Spurs early on. 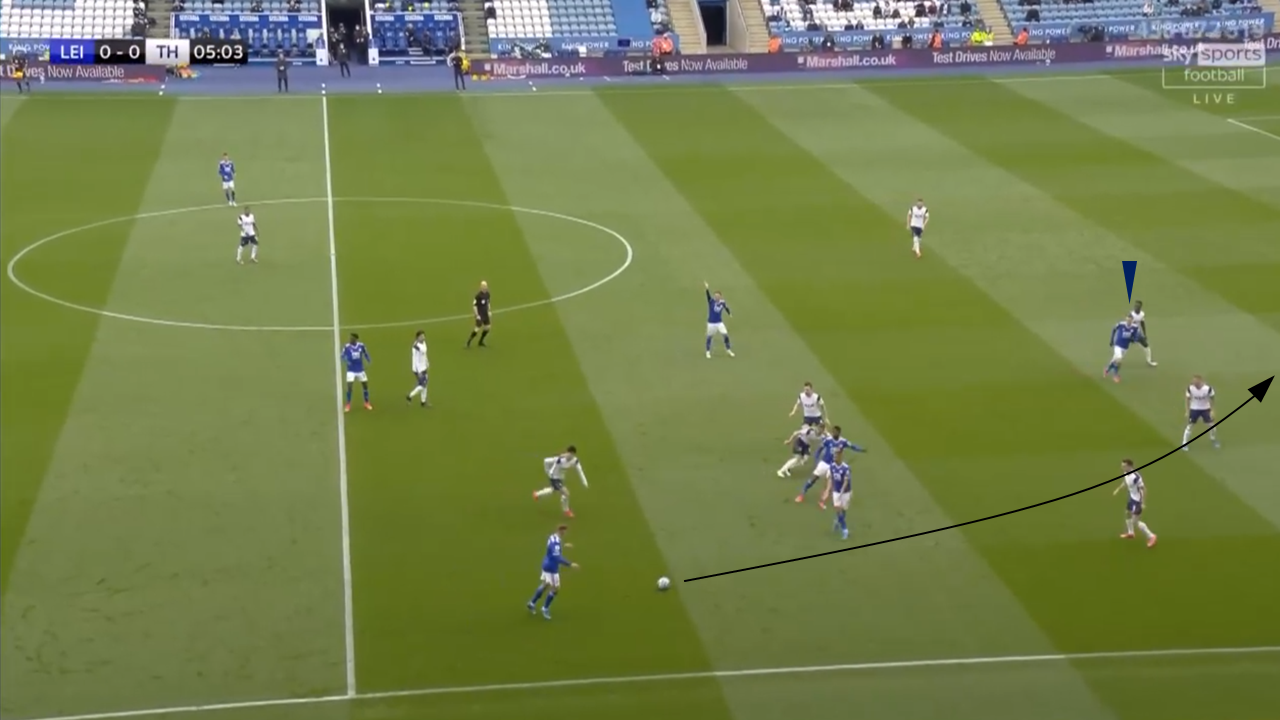 When progression through the middle was not possible, Leicester would use their full-backs to play Vardy in. Albrighton and Thomas would look to receive the ball out wide near the halfway line and quickly release the forwards who would make the run behind the defence. This was very effective, as the starting position of the pass meant that the Spurs full-backs would be dragged out of position to engage them, leaving ample space for the forwards to attack and isolate the centre-backs. In this way, Leicester twice took the lead with Vardy proving too much for the centre-backs to handle, winning two penalties which he then promptly converted. 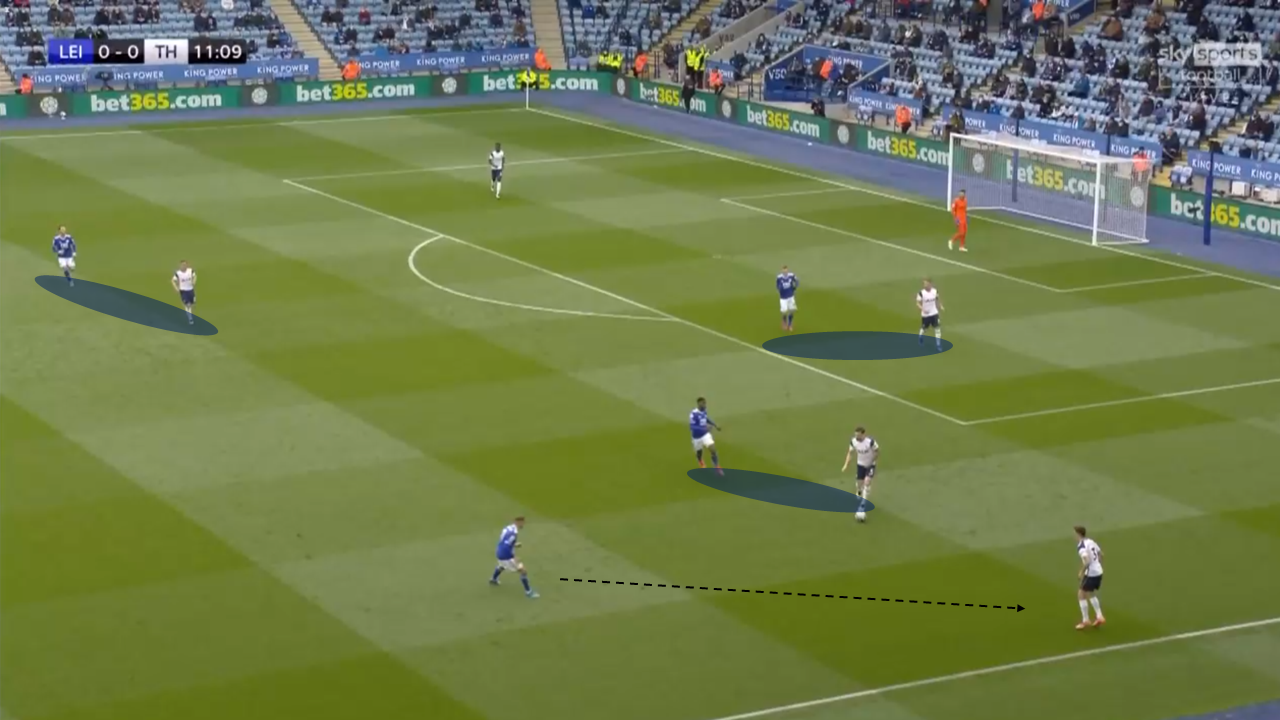 Leicester had all the initiative in the opening stages with the side looking largely in control of the game. This is not to say they dominated though, as Spurs still managed to get on the ball but in terms of creating opportunities, it was the home side doing most of it. This was due to their press which made it difficult for the Spurs side to progress. As seen above, one forward would press the ball-side centre-back while the other would move to press the ball carrying pivot. Maddison would then press the other pivot while the wing-back could move ahead and engage the full-back if necessary, meaning that Spurs had to resort to long balls forward in order to regularly progress the ball. This hampered the likes of Alli and Kane from receiving the ball in central areas to their feet and then taking on the defence, which is where they are most effective. 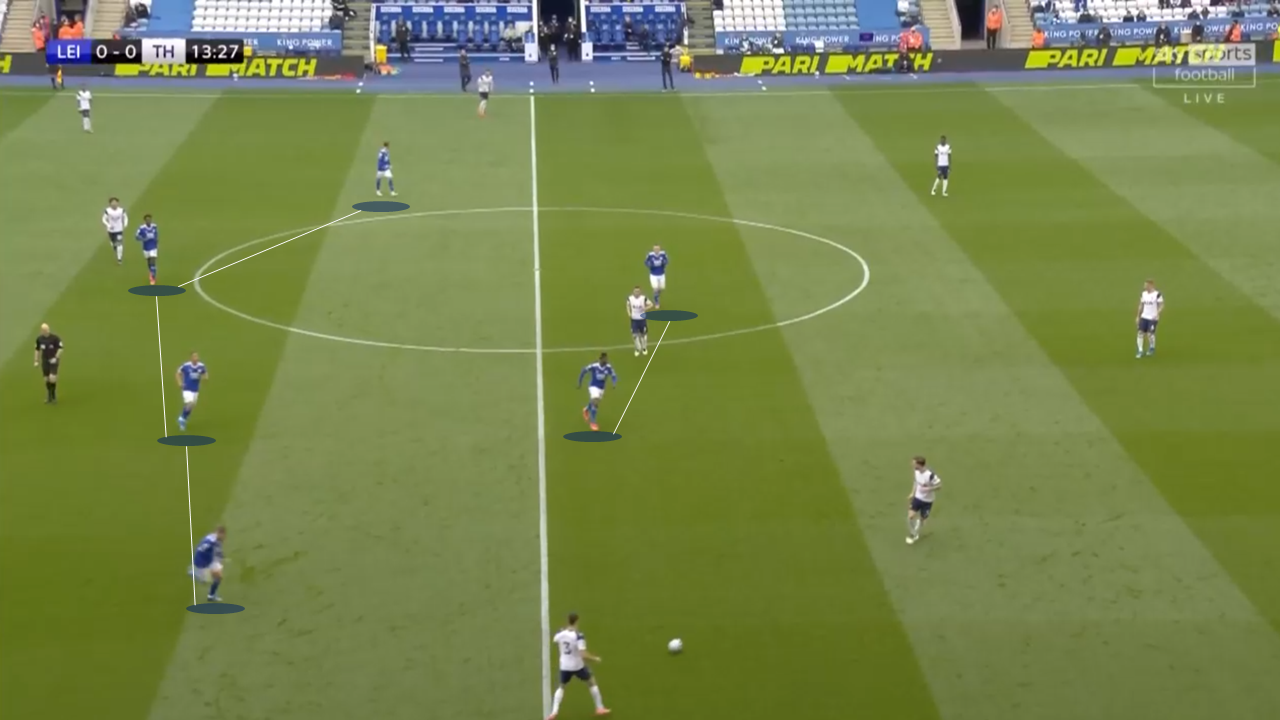 Further back, the home side settled into a 4-4-2, with Maddison and Albrighton acting as the wingers and Castagne and Thomas the full-backs. One of the Spurs pivots would drop back to receive the ball from the centre-backs and so the front two for Leicester would seek to cut out the pass to the other pivot. They would stay close to their man, meaning he could be quickly closed down in case a pass went to him and further back, the midfield pairing of Ndidi and Tielemans would keep Alli within their reach, effectively preventing any passing through the middle. Spurs’ most likely way of progressing the ball was either to pass it through the wings, where Leicester could then move across and close them down or to play long balls in towards the likes of Kane. All this meant that Spurs were not very effective going forward and the early initiative was seized by Leicester.

Spurs sort themselves out with good pressing and swift counters 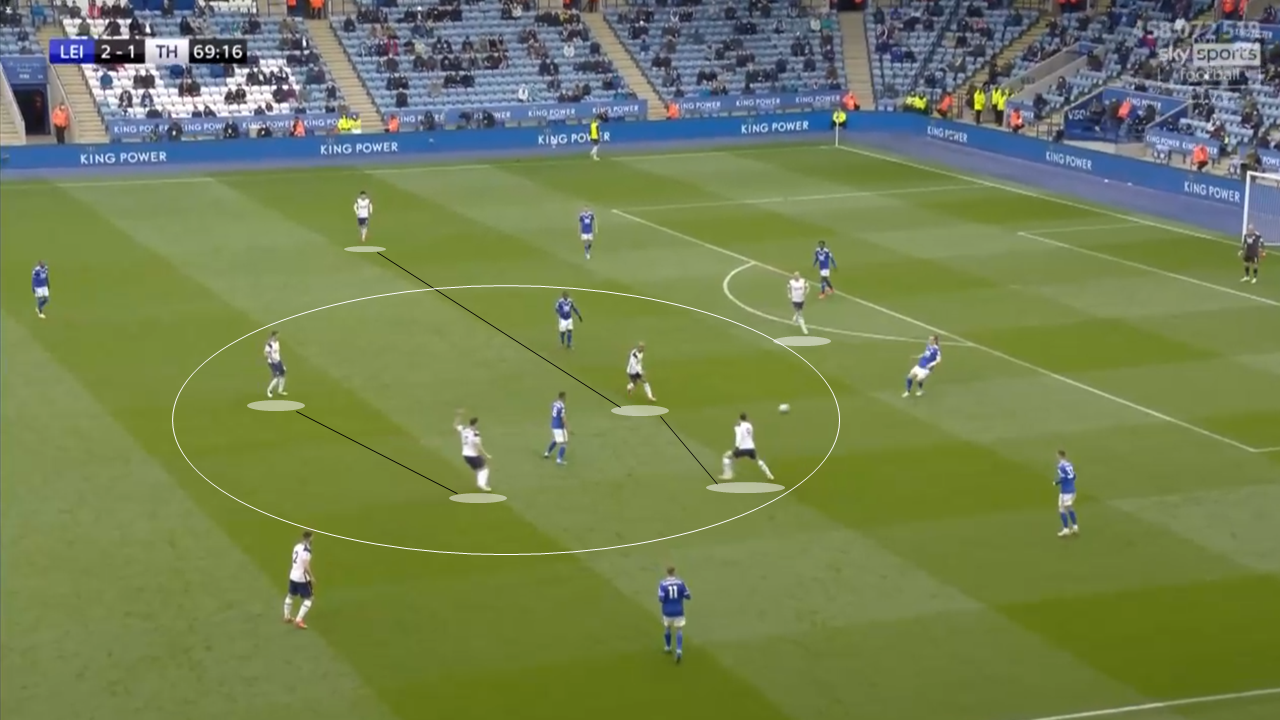 Despite going behind once to a penalty before grinding out an equaliser, Spurs found themselves trailing yet again to another Vardy penalty. However, this seemed to jolt Ryan Mason’s side into action, with the team suddenly looking a lot more active and efficient on the field. Mason brought on Lucas Moura and Gareth Bale for Bergwijn and Alli and suddenly, Spurs were pressing even better than before. The tactics were largely the same, to cut out the passes through the middle but Alli and Bergwijn were not able to consistently do this, meaning that Leicester could still bypass their pressing lines.

With Bale and Moura, Spurs kept their 4-2-3-1 shape out of possession but would crowd the midfield, with the two pivots pushing up and either Bale or Son, whoever was ball-side, dropping in to put pressure on the midfield pair of Leicester. This negated the creativity of Tielemans and Maddison further ahead as well since the central passing lanes were cut off and Spurs’ high press meant that the full-backs were too deep to play balls into the channels for the forwards to chase. This made it very difficult for Leicester to attack and with Spurs finding an equaliser through a fortunate corner which saw Schmeichel fail to deal with the ball in and the ball deflect off him into his own net, the game was balanced heading into the final stages. 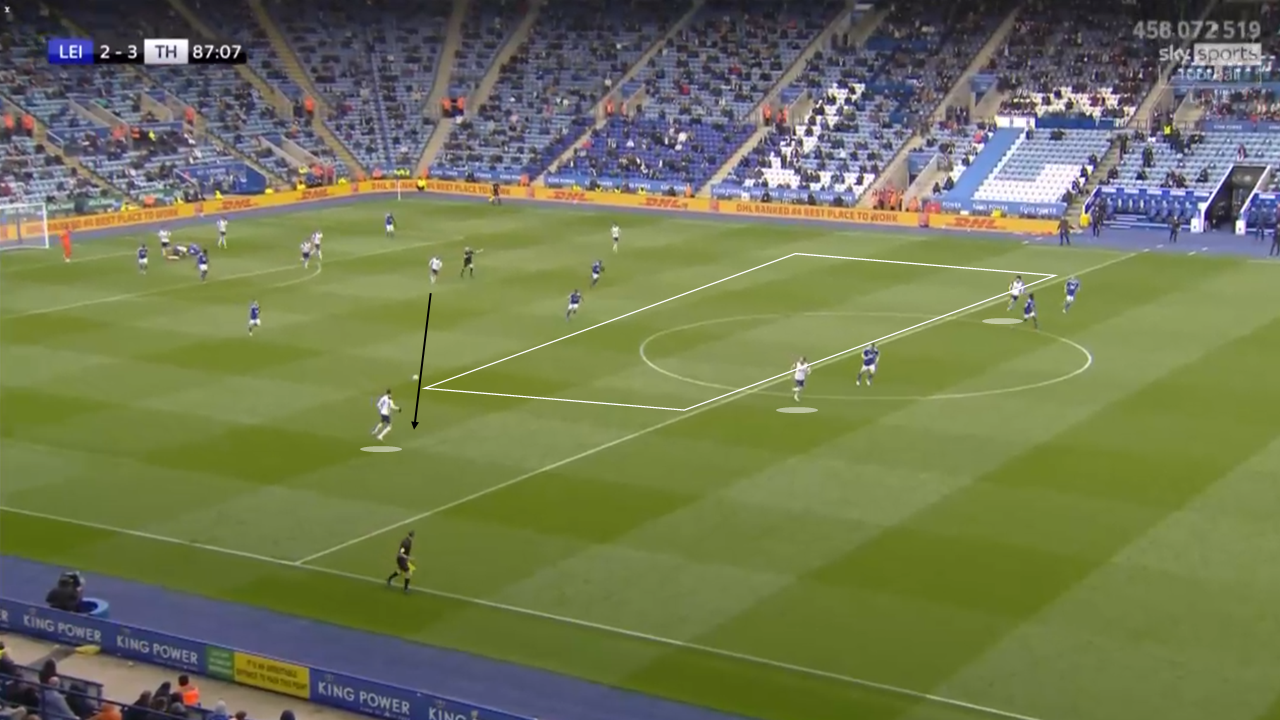 It was Leicester who buckled, with the side chasing the goal that would send them to the Champions League. They were effectively in a 3-2-5 formation as they looked to attack with numbers and in doing so, left huge spaces between the lines. Bale, Kane and Son stayed forward for Spurs and were easy outlets for a pass, effectively able to create 3v3 situations at the back. Spurs played the waiting game essentially, defending Leicester’s attacks while setting up to play on the counter and in the end, this paid off with Bale rounding off a quick counter that started as shown above. After an unsuccessful Leicester move, the ball was quickly played to Moura who could release a free Bale down the right-hand side with loads of space to run into. With the quality and experience of the front three, Spurs were able to covert their attack and take the score to 3-2 in their favour. It was an uphill task for Leicester after this, and in committing forward once more to conjure up a miraculous win, they conceded to yet another counter to leave the final score at 4-2 in Spurs’ favour.

After spending the most days in the top four this season, Leicester succumbed to yet another season of Europa League football owing to their final day result. Of course, playing in the Europa League is still a success for this Leicester side but it could have been so much more considering the quality of football that the side has played this season. A poor run of form towards the end of the season saw them depending on other results to seal Champions League football and despite Chelsea faltering and losing 2-1 away to Aston Villa, the Foxes failed to win their own game, seeing them drop out of the top four. They still have the FA Cup trophy to show for their efforts this season though and Brendan Rodgers will surely be back next season with the aim of finally securing that elusive Champions League spot.

As for Spurs, this season could have been so much more with the side even being top of the table at one point. However, what followed was a highly inconsistent run that saw Jose Mourinho dismissed from his duties and Mason taking over, with the side scrambling to get into Europe. With each passing game, the Champions League became a distant dream and a loss to Manchester City in the league cup final did not help the side’s confidence either. Eventually, the Europa League proved to be too much as well and Spurs have to settle for a place in the newly founded Conference League. Of course, this lacks the same prestige as the other two European competitions but it still is a competition where the side will be expected to compete for the trophy and winning it would only boost the confidence of this Spurs side.