Coppa Italia Final 2021 Preview: What to expect from Atalanta vs Juventus – tactical analysis

The 2021 Coppa Italia final sees Atalanta take on Juventus, with both sides having contrasting seasons so far. The former has secured Champions League football for the third season running with a game to spare and currently sit second in the league. A win against AC Milan on the final day would see them secure their highest ever league finish and Gian Piero Gasperini has said that his side have already had a successful season regardless of the result in the final. Of course, the trophy would be an ‘icing on the cake’ in his words but they face tough competition from Andrea Pirlo’s Juventus, for whom the trophy could possibly cover up the cracks of this season.

With just one game to go, Juventus’ Champions League hopes are not in their own hands and they need one of Milan or Napoli to slip up in order for them to book their spot in Europe’s elite competition. Having won the league nine times in a row prior to this season, the Old Lady has suffered a stunning fall from grace and failure to qualify would possibly mean losing their star man Cristiano Ronaldo for next season. With everything to play for, our tactical analysis previews the fixture and this analysis seeks to identify the possible tactics of both sides ahead of the final. 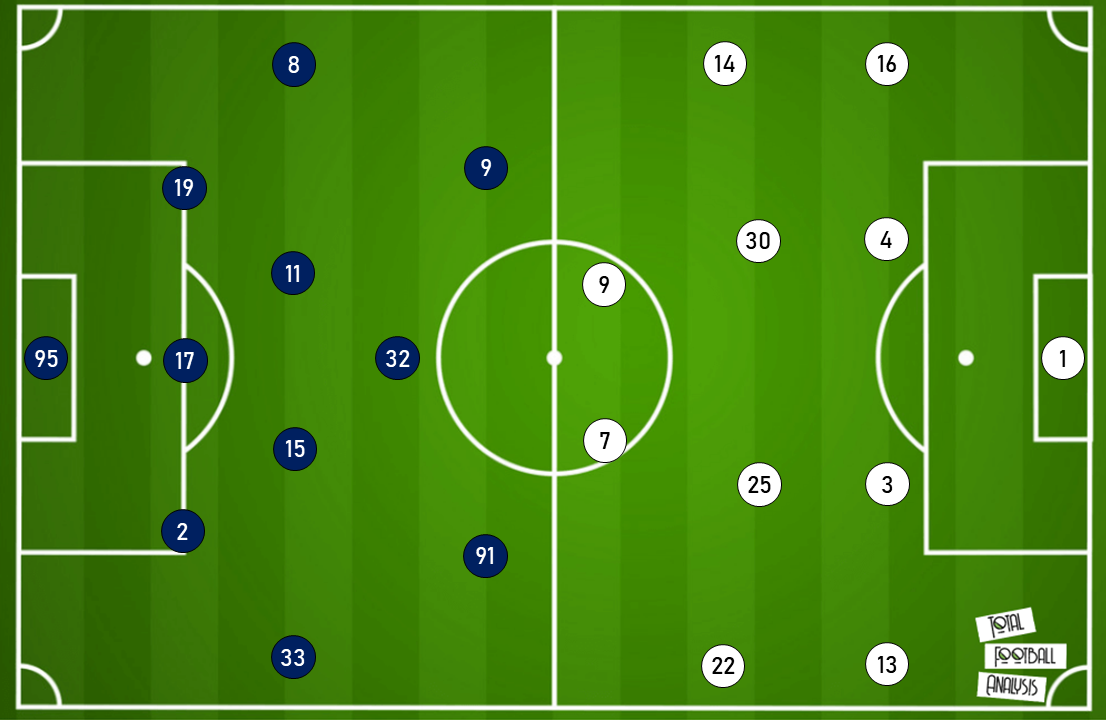 While Gasperini’s preferred formation has been the 3-4-2-1, we believe he would switch to the 3-4-1-2 for the final, considering that this was his formation of choice in both the league fixtures against Juventus this season. The 3-4-1-2 allows his side to press the Juventus center-backs more effectively and also has a central player behind the forwards in order to prevent Pirlo’s side from having a free man in midfield. Like the 3-4-2-1, the 3-4-1-2 also has natural diamonds in the formation and this emphasis on using diamonds in possession have become a trademark of Atalanta’s tactics.

We have seen Pirlo use either the 4-4-1-1 or the 4-4-2 formation this season, but against Atalanta it has been the 4-4-2 formation that was preferred. This is largely due to the fact that when going forward, Atalanta effectively leave just two centre-backs behind and the 4-4-2 formation means that both the centre-backs cannot push too high as they risk being outnumbered very easily. Another reason for this is that Alex Sandro is suspended for the fixture, meaning Danilo would likely shift over to the left and Cuadrado would play as the right-back as opposed to the right-winger. When this happens, the 4-4-2 has been the formation of choice for Pirlo. Ronaldo is the obvious choice up front and we feel Morata would partner him, ahead of Paulo Dybala. The rest of the side is largely straightforward except perhaps for McKennie, who we feel would start owing to his more aggressive pressing nature and the fact that he has been Pirlo’s choice previously against Atalanta. 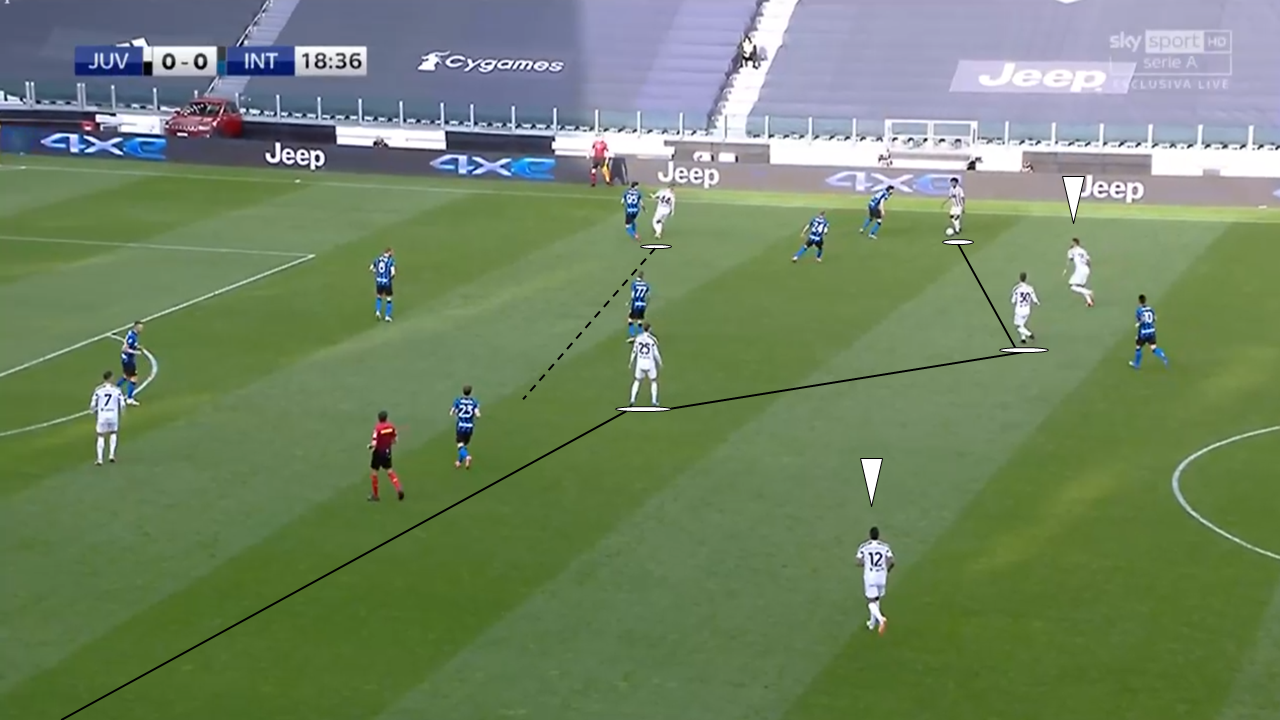 A key feature of Pirlo’s tactics has been the positional shifts involving the full-backs. With the side setting into a 4-4-2 or 4-4-1-1 shape in possession, the wingers hold their width and stay close to the touchline on either side. The full-backs, however, occupy more narrow spaces and the ball side full-back often makes underlapping runs, as opposed to overlapping ones, while the other full-back moves to occupy central spaces of the pitch. The two central midfielders also move ball-side and offer themselves as passing options, meaning that they can look to overload the wings, drawing the opposition to them while also having the option of switching the play to the opposite flank where a free player could receive the ball.

The inverted full-backs allow for this rotation to happen smoothly, providing an easier, shorter passing option as opposed to looking to directly switch the play. This also allows the free player to push higher into more dangerous spaces while the full-back himself can push forward into the half-spaces himself. 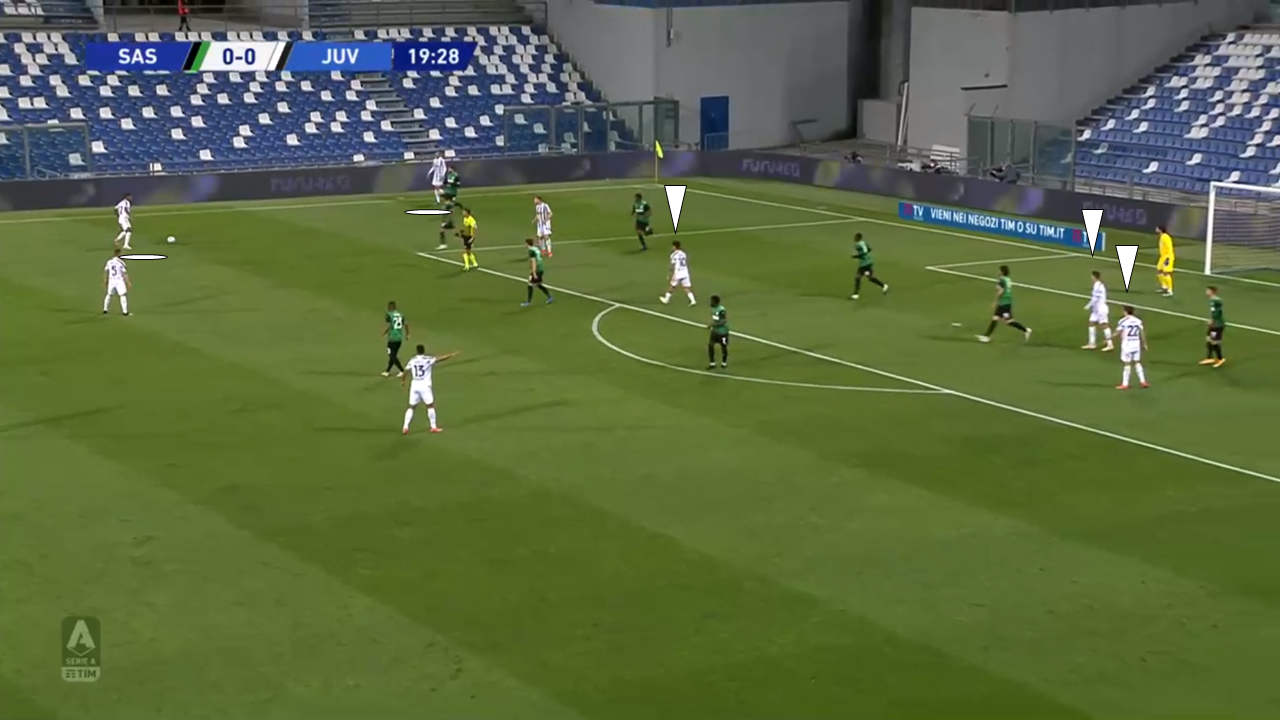 Now, it is clear that Juventus look to direct their attack down the wings and Pirlo pushes his side to get into crossing positions, aiming for the two forwards in the box. While this has been criticized owing to the one-dimensional nature of their attacks, it has been something that Pirlo persists with, and with Ronaldo moving around the box, it may not be the worst idea either. Effectively, Juventus aim to have at least three players in the box, the two forwards as well as the winger from the opposite flank, and look to cross from areas just ahead of the penalty box, leaving the attackers enough space to run in behind the defense as well. Having been Pirlo’s go-to tactic, we expect to see more of this in the final. 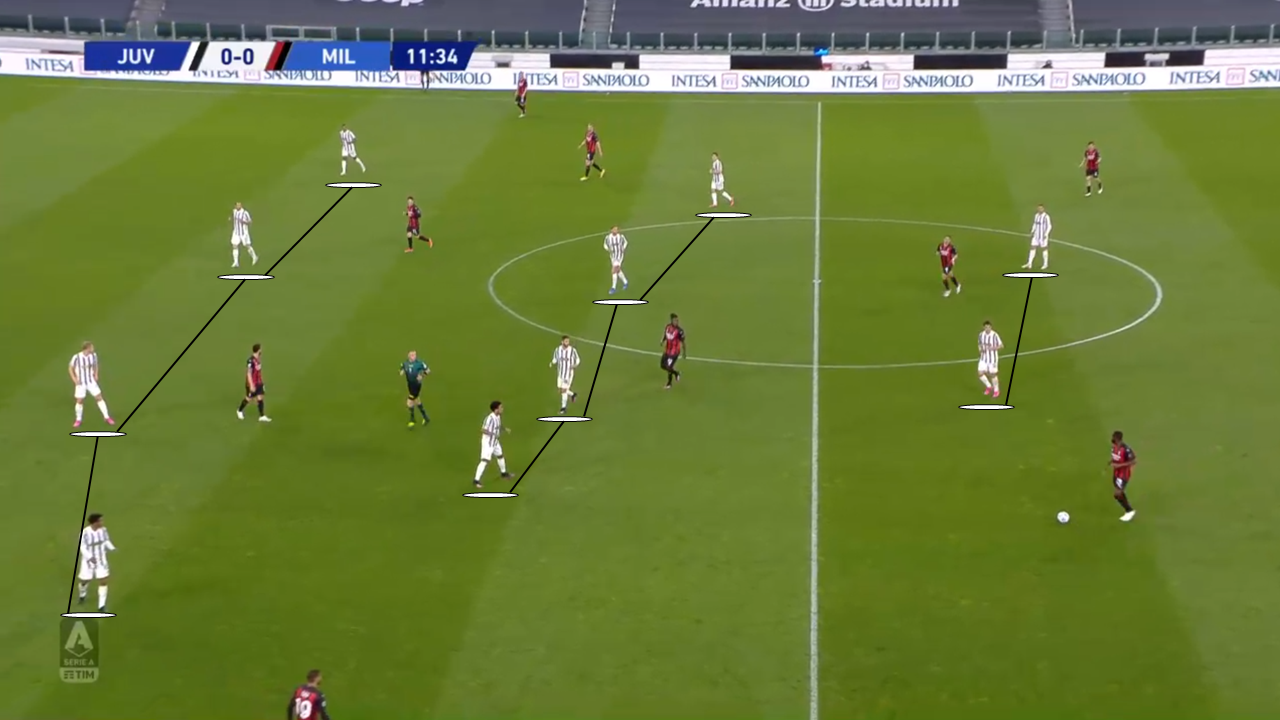 Now, off the ball, Juventus set up in a compact 4-4-2 and we see this especially with their midfield line of four. Especially with McKennie playing, who is more of a central midfielder as opposed to a winger, the shape is all the more compact and forces the opposition to the flanks, where the full-backs are already positioned. Of course, Atalanta seek to overload the wings themselves, and hence this compact shape may see Juventus be outnumbered down the flank but this is something we will see in the following sections.

Diamonds, diamonds, more diamonds, and a high press from Atalanta 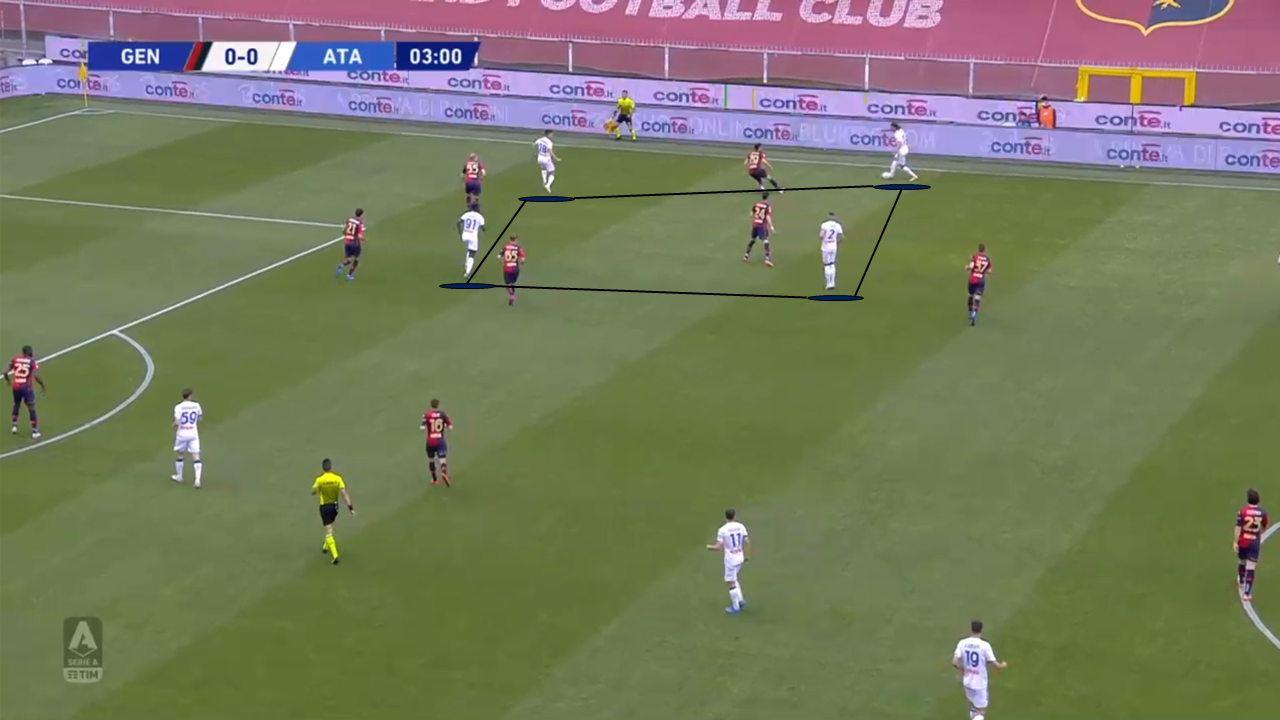 Atalanta’s free-flowing football has caught the eye of the footballing world and under Gasperini, the side have hit 90 goals in the league for a second straight season. The key to this has been the use of diamonds down the flanks, effectively meaning that at all times a player with the ball will have three passing options. Even if one is marked the player still has two options and what is interesting is the positional shifts involved such that once a passing combination down the wing is completed, another diamond can be formed centrally and the side once again can rotate the ball within this diamond as they progress towards the goal.

In the above image, we see how Atalanta’s diamond allows them to first overload the flanks and once they play out of the wings towards the center, there are two central players that can move in and create another diamond so that they keep the pressure on the defense while also making it extremely difficult for the opposition to win back possession. 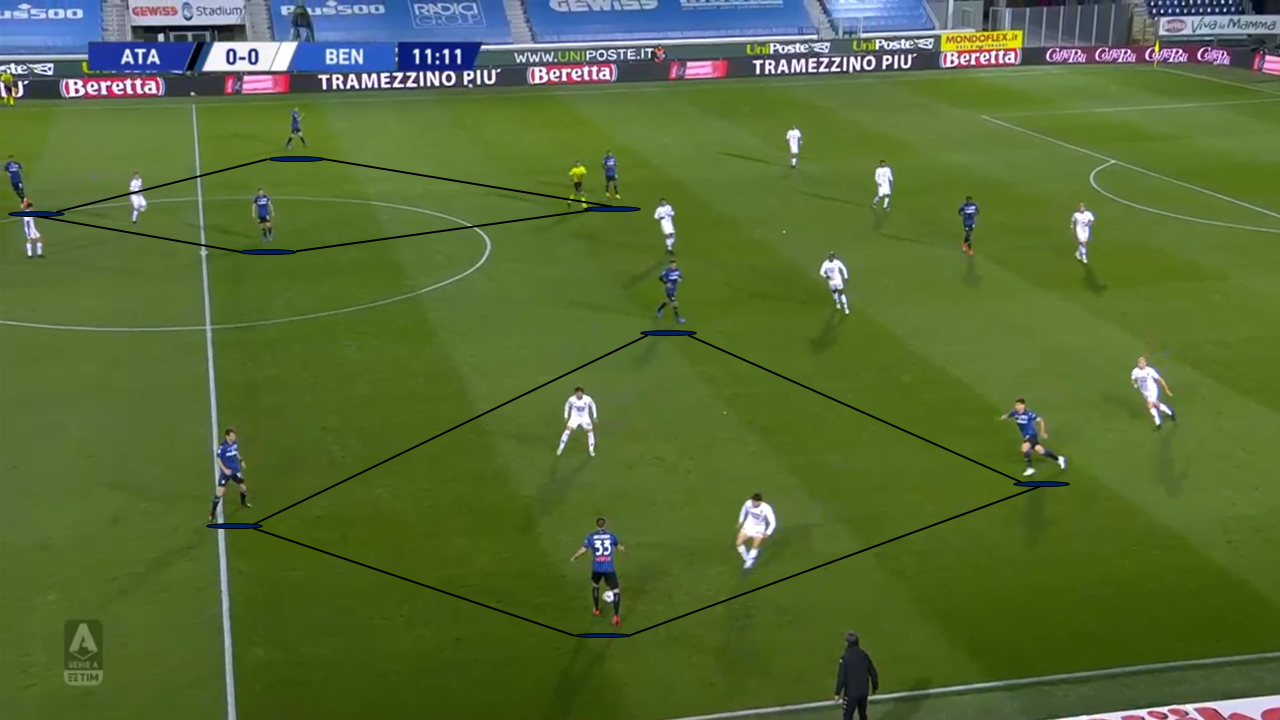 If the point still is not clear, Atalanta love their diamonds. Another example of this is shown above, with the side forming a diamond down both sides, meaning that Zapata has a free role forward as does one center-back behind as well. Should the ball be passed forward, Zapata can move into position to create a diamond so that they can cycle possession and if it is moved backward, the center-back does the same. This is extremely difficult to mark considering that the Atalanta players are always in motion and at any given time could have three players to pass to in good positions as well. Of course, it is not impossible to break, with the gaps between the diamonds being crucial for an opposition side to exploit and we will see this in a while. 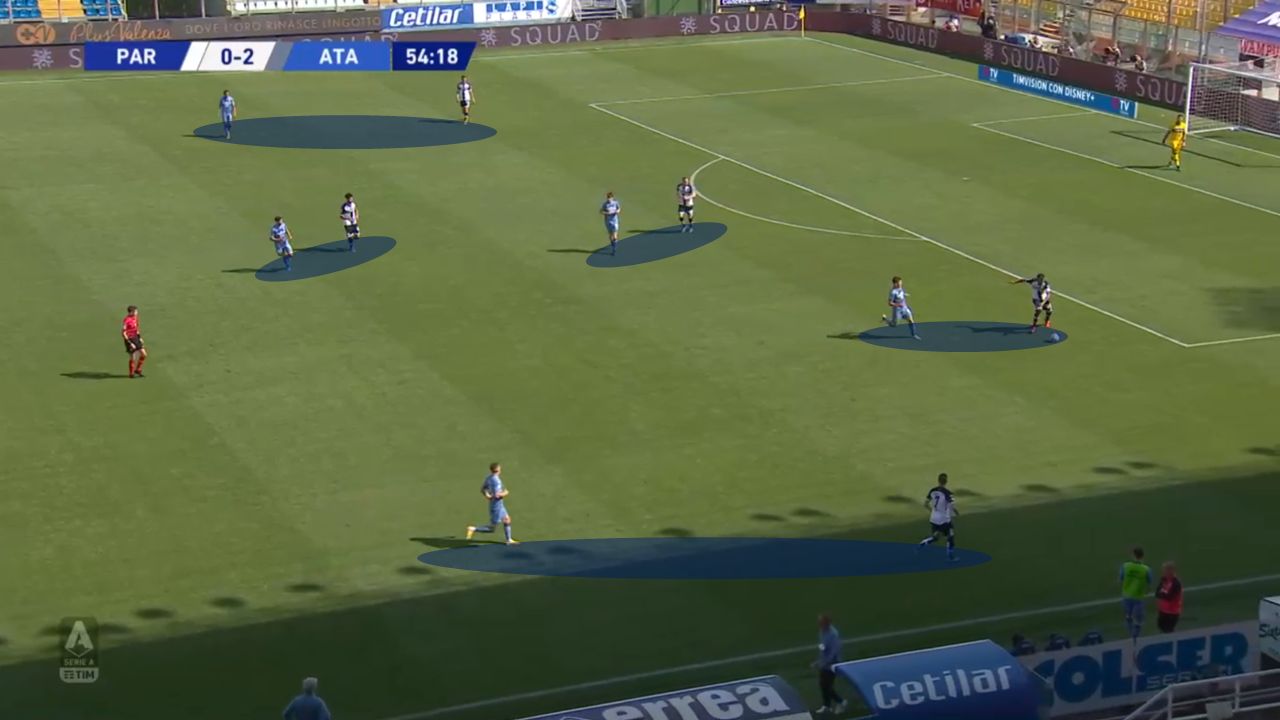 Out of possession, Atalanta press high and pretty much man-mark the opposition defenders. We see above that the two forward players press the center-backs while the central player behind them covers the defensive midfielder. The wing-backs also push high to press the opposition full-backs and force the opposition to play long balls forward. Of course, should the opposition win the first or second ball from this, they can hit on the transitions and this is perhaps one of the ways to bypass this Atalanta press. Pirlo would surely look to get past this effectively and have the likes of Ronaldo and Chiesa running into the vacant spaces in order to exploit the Atalanta defense.

Past meetings show that central spaces are key 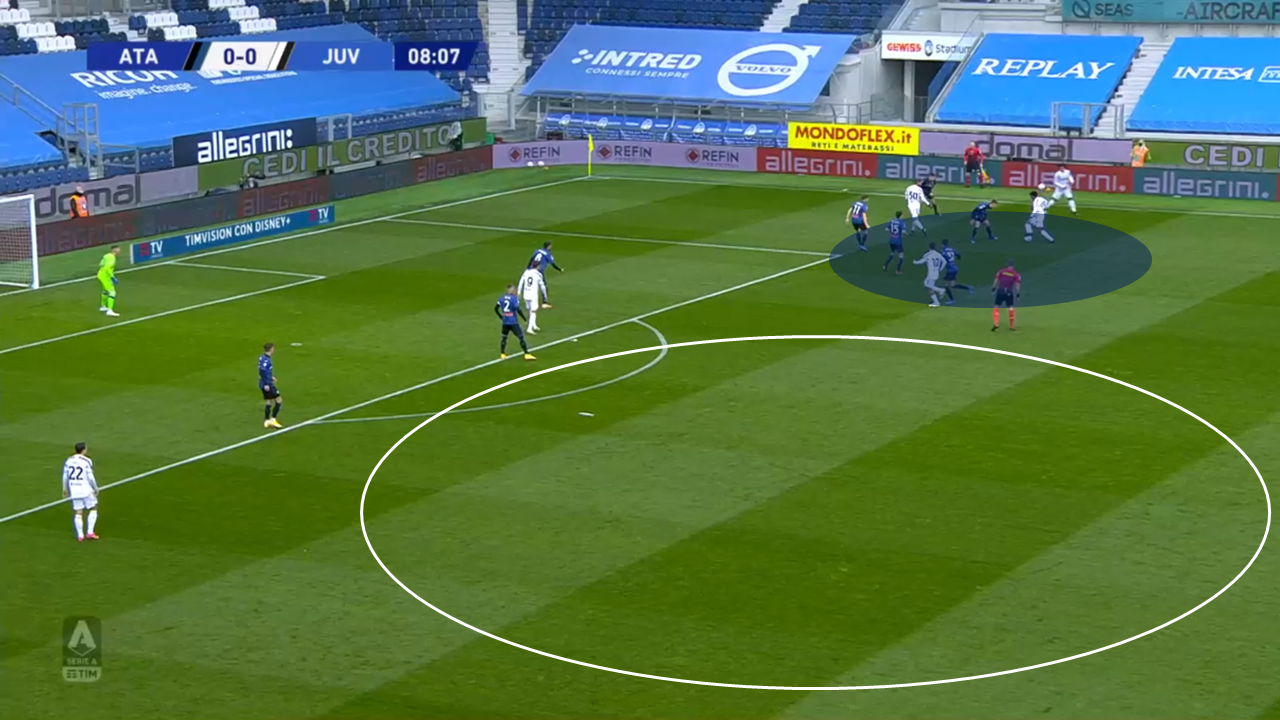 We spoke about how both Atalanta and Juventus take a liking for the wings and quite frankly, we do not really expect that to change in the final. As the image above shows, the wings can get very crowded, with both sides looking to overload the flanks and in such cases, massive areas could be vacant centrally. While both sides seem fine to allow these spaces, it is important to note that all three goals scored in the previous fixtures were shots from central areas outside the box, with the ball carrier not being closed down quickly enough and finding room for a shot. While this is not the most effective way to score, it may very well come down to that in the final. 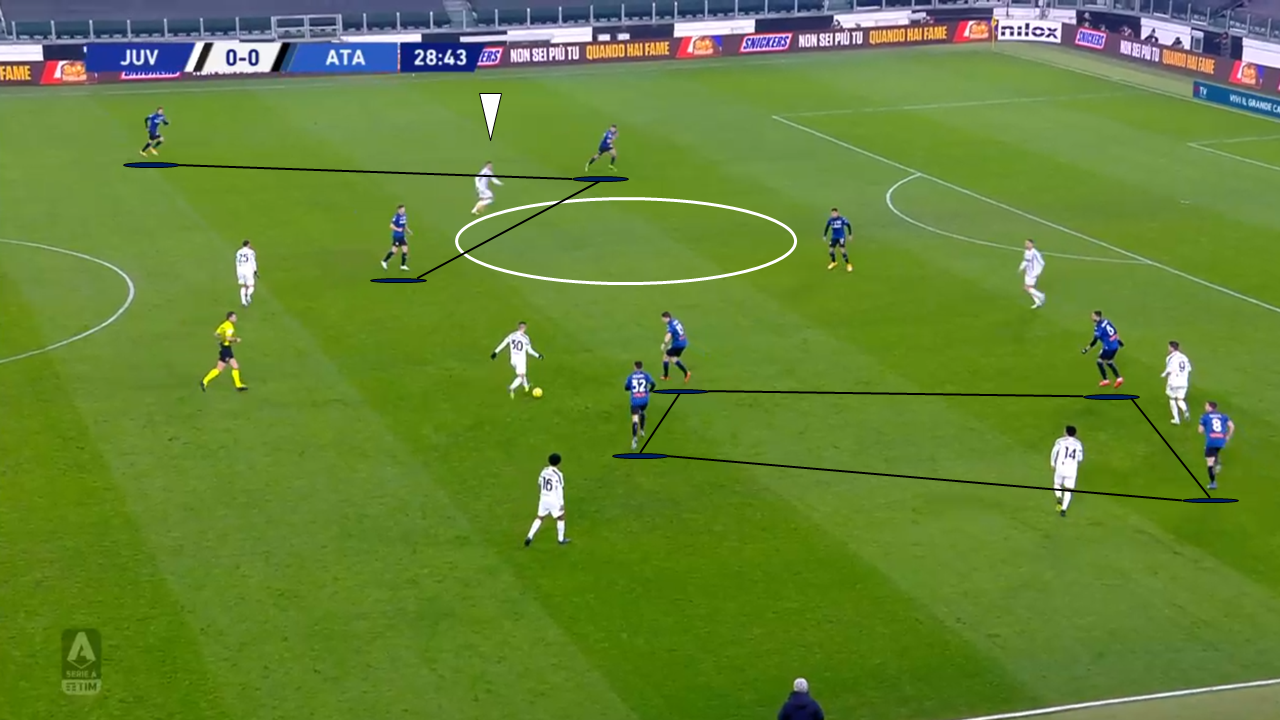 In the fixture that ended in a 1-1 draw in December, Juventus drew first blood by exploiting the gaps between the diamonds, which we mentioned earlier as a way of breaching this Atalanta side. Chiesa’s intelligent run into the central space meant that he effectively had one center-back to beat before taking the shot on and impressively, he managed to put this away. In the same game, however, Freuler managed to level the scores after a neat tackle saw him in loads of space centrally, allowing him to find the back of the net from range. 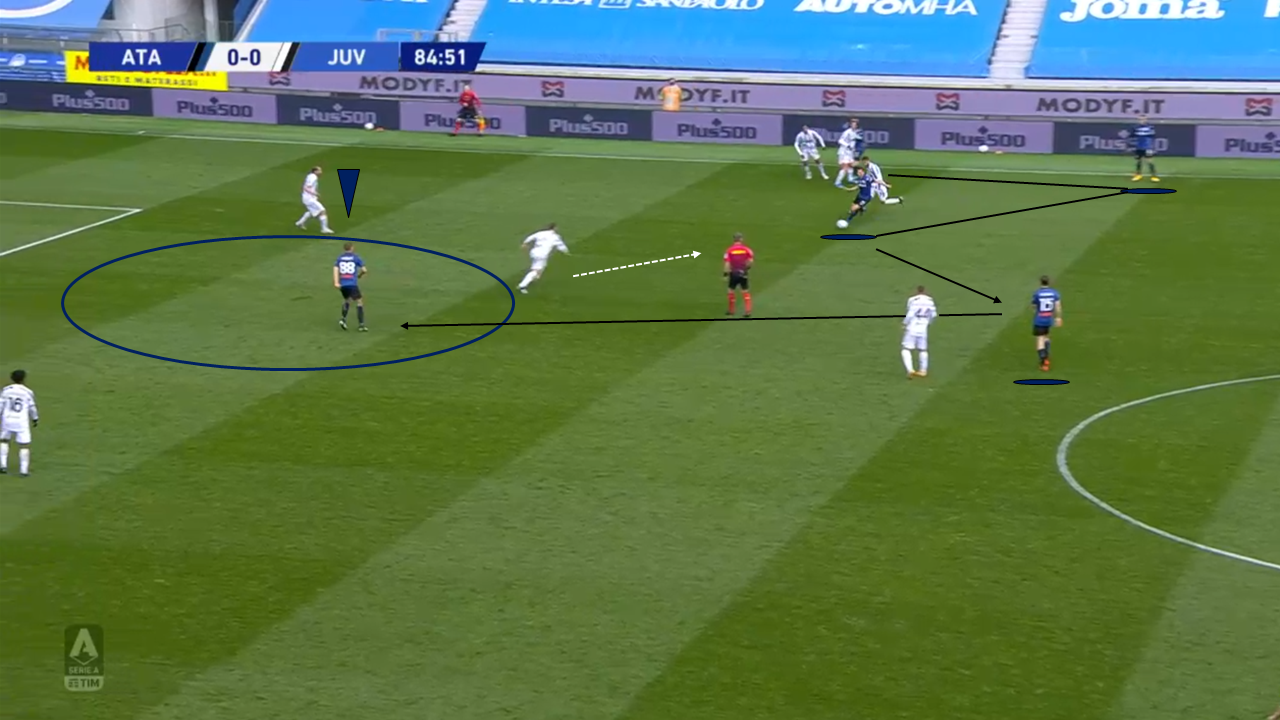 This image from the more recent fixture in April, which Atalanta won 1-0, probably describes the more likely method that Atalanta will look to score with. While the eventual goal was scored after a ball from a corner found its way to Ruslan Malinovskiy outside the box, this corner was a result of a free-kick that came about at the end of the above situation. Atalanta’s ‘diamond’ is actually just a triangle, with Mario Pašalić staying central. Juventus, however, have expected the diamond in this scenario and committed one man too many to the flank, meaning Pašalić is a free option in the middle. A quick pass to de Roon from the flank allows him to find Pašalić in open space, who then has a range of options in attack. Juventus brought him down though and conceded a free-kick, but if not, Atalanta may have very well scored from the above situation.

All this shows that while both sides primarily will look to attack the wider areas, the key to unlocking the opposition defense and finding a goal would be clever and quick passing to move centrally, exploiting gaps in these areas and making the best use of them. We cannot expect a screamer to decide the game, but going by their meetings in the league, you would not put it past the two sides to do just that.

Juventus are yet to beat Atalanta this season but with the Coppa Italia likely to be their saving grace, expect Pirlo’s side to come out fighting with all they have. Gasperini surely has a couple of tricks up his sleeve, however, and despite his comments about the trophy being an ‘icing on the cake’, it is surely something that he will want his side to get their hands on. It is uncertain if Pirlo will crack the code of Atalanta’s diamonds and neutralize their threat but recent history does suggest that Gasperini knows how to tackle the threat of Juventus. They are no longer Italy’s underdogs and if they do come out winners at the end of the final, do not be surprised.