This game was the first for two teams that ended up on the opposite side of the Premier League table last season. The previous year 4th positioned Chelsea visited Brighton and Hove Albion, who ended out of the relegation positions in the 15th place. The game did not show that difference, with the hosts being superior for most of the game. The Blues got the job done, taking advantage of Seagulls’ mistakes without deserving much on a 1-3 victory.

In this tactical analysis, we will go through the tactics and strategies used by both teams, showing how Graham Potter planned an excellent strategy nullifying the central attack of the Blues. This analysis will also cover how Frank Lampard incorporated their new players from the Bundesliga, bringing their transitional style.

Potter selected a 3-5-2 formation, starting the former Leeds United player Ben White as a right-back in the back three. Former Chelsea player Tariq Lamptey began in the right wing-back with Solly March starting on the left side. Adam Lallana has his first minutes for the Seagulls, even though he was replaced early in the first half by Aaron Connolly. Upfront Neal Maupay and Leandro Trossard where the striking duo, with the last one taking the former Liverpool position after his injury.

Frank Lampard choose a 4-4-2 formation, giving confidence again to Kepa Arrizabalga as the starter on goals. With Thiago Silva waiting to start training for the Blues, Andreas Christensen paired Kurt Zouma as half-backs. César Azpilicueta was not fit enough to start, giving the starting full-backs position to Reece James and Marcos Alonso. Kai Havertz and Timo Werner made their debuts, with the former playing as an advanced midfielder on the right side and the later as a left striker. Ruben Loftus-Cheek returned to the team after his injury, supporting the German in that attacking position.

Even though the Seagulls went to half time 0-1 down, they dominated the first half of the game with 63% of ball possession. The first half for the Seagulls was excellent when in possession, playing the ball out from the back. From the goal kicks, they switch their 5-3-2 shape into a 4-3-3 creating a 7 vs. 5 in their half. On the right, Lamptey sited deep as a full-back, with the three midfielders giving central options. On the left, March positioned in the Blues half with the two forwards pinning their backline and N’Golo Kanté. When Kanté’s pressed, it created problems as we are going to see later, forcing mistakes. In the next shot, we can see their build-up shape, shifting into a back four and creating a numerical superiority to progress the ball to the middle third. 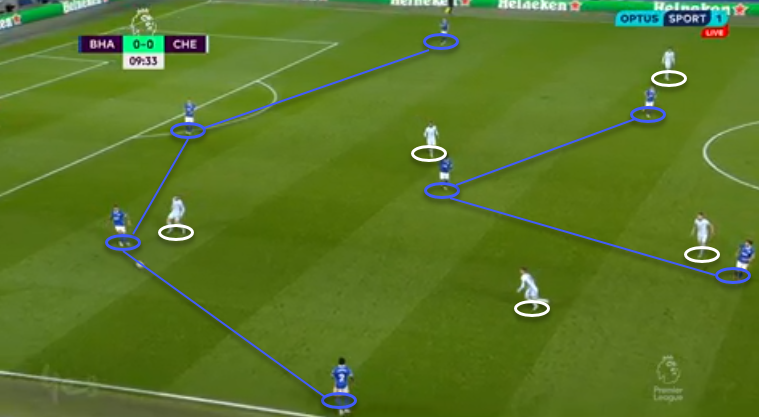 The other factor that gave the Seagulls the dominance of the first half was their tactics when out of possession. They pressed high when the Blues intended to play out from the back with two lines in a 3-2. If needed, also the wing-backs were involved pressing on the flanks when the Blues overloaded one side of the pitch. The next shot depicts the Seagulls’ high positioning with two pressing lines in Kepa’s goal kicks, ready to launch a high press, forcing the Blues to go long. They ended the first half with a 9.6 PPDA tally, being much more intense when pressing than the Blues, who accounted for a 12.1 PPDA in that first half. 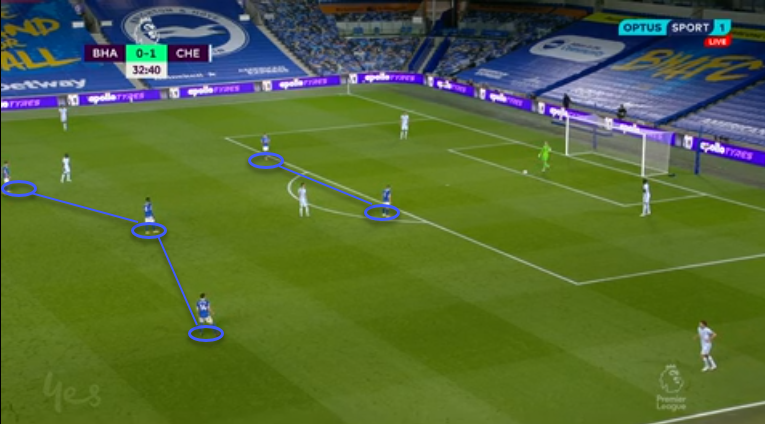 When Chelsea managed to progress the ball, the Seagulls retreated from their high pressing into a low-block. In their defensive third, they withdraw both wing-backs in a 5-3-2. They kept horizontal and vertical compactness, not giving any space for the Blue’s advanced midfielders to combine with the forwards. In the next shot, we can see the compactness kept by the Seagulls, cutting off any possible action through the central channel. Chelsea’s strength relies a lot upon the central combination of the front two, the advanced midfielders that tuck in, and the holding midfielders. The Seagulls strategy worked correctly, stopping the central combination of the Blues without conceding any chance from their attacking phase in the first half. 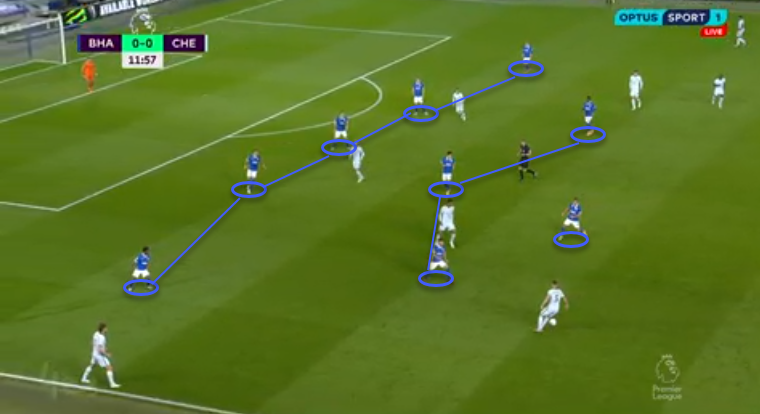 Attacking Chelsea’s weaknesses in the flanks

Chelsea played out off possession in a 4-4-2 withdrawing their attacking midfielders, Mason Mount and Havertz. Both being more attacking minded midfielders, they lack in defensive attributes when out of possession. This weakness, when defending, could be asses if the team remains compact, giving support on the wide channel. This compactness becomes more accessible when they played in a 4-3-3, with an extra central midfielder to create a five-man line. Albeit, the 4-4-2 shape left the team spread horizontally with gaps in between the midfield line. The next shots depict the lack of support given on the flanks on this case to Mount, who had to deal with his former teammate Lamptey, without cover. 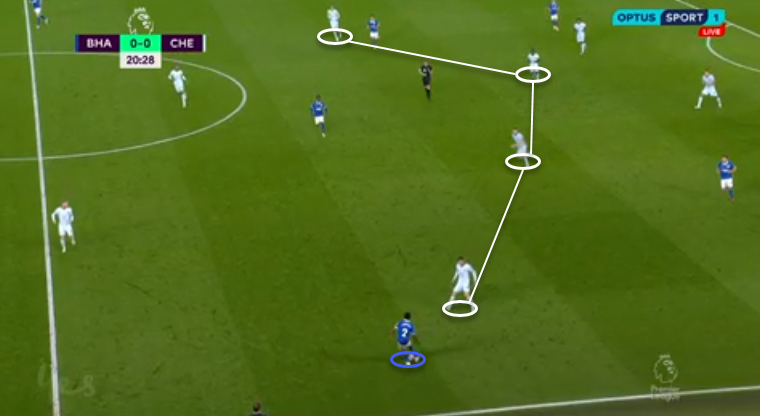 Brighton exploited this defensive weakness with their wing-backs, Lamptey attacked the right side and March on the left. In the next picture, we can see how they used long crosses from left to right to find the former Chelsea player, who had an outstanding performance, open wide next to the touchline. There was a quality superiority created in the flanks as both wing-backs outplayed the Blues’ advanced midfielders with ease on 1v1 scenarios.

The Seagulls also used a numerical superiority in the flanks. They created overloads in the wide areas, using one of their midfielders, as shown in the next shot. March and Leandro Trossard combined in the left flank, creating a 2v1. From their 1.15 xG in the game, the Seagulls generated 81% of those chances through their wide attacks. Lampard read this tactical superiority, introducing Ross Barkley replacing Loftus-Cheek. The blues shifted into a 4-5-1 when defending with the wing-backs receiving support from the midfield line, reducing the quality and numerical superiority in the flanks in the second half. 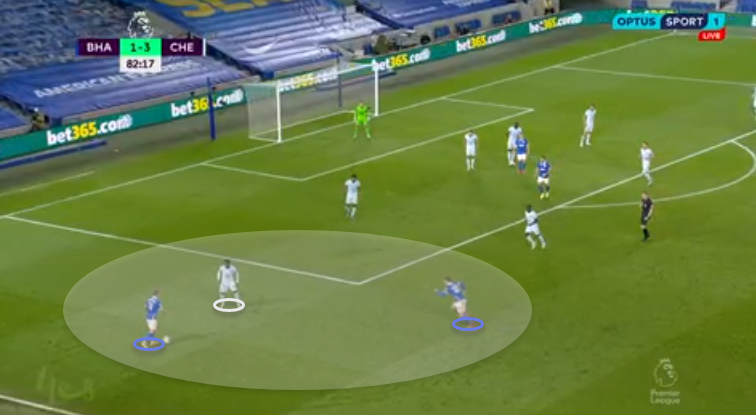 Both acquisitions from the Bundesliga made their debut in this first game, Warner, with more participation than Havertz. We saw some good things from the former Red Bull Leipzig player, exploiting his pace to give a different option to the Blues counter-attacks. Last year with the likes of Olivier Giroud or Tammy Abraham, Lampard’s team lack of pace up the front on transitions. The next shot depicts one counter-attack in which Warner ran out of pace to win the back of the Seagulls defensive line; the pass of Loftus-Cheek’s did not connect the striker as the last defender blocked it in his last effort. 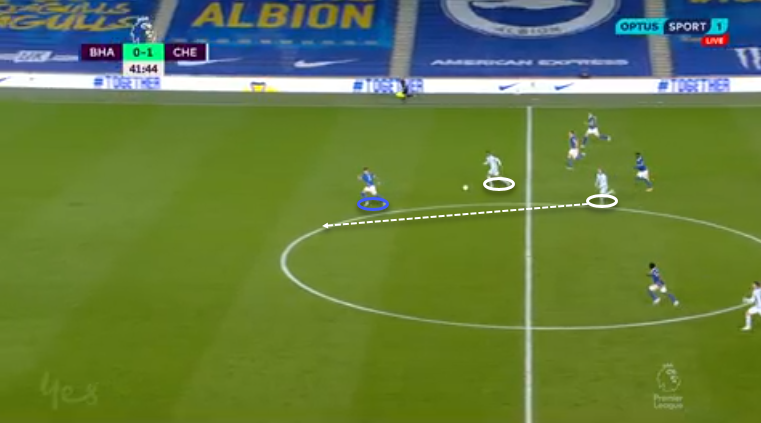 The penalty given on the first half to Chelsea came from a counter-attack after winning the ball from a goal kick from the Seagulls. This time Kanté was involved in the pressing, creating a central trap winning the ball, and assisting the German, who was fouled inside the box by Matt Ryan. With Warner playing upfront, the Blues will find a significant weapon on counter-attacks, exploiting his pace and ability to read the game in transitions, as he did when playing in the Bundesliga. 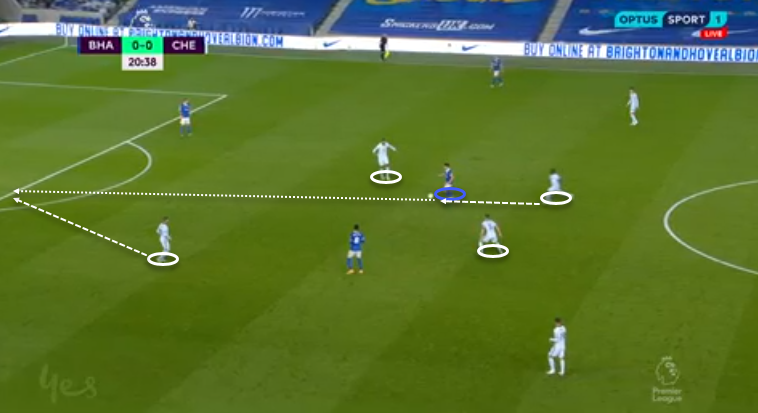 Havertz was not so much involved in the game; we only saw a few participations of the other debutant on this first game. He was involved in just 55 actions, way less than Mount, who participated in 88 actions on the other flank with a similar success rate. Albeit, this player gives additional options to exploit the back of the defensive lines with speed. With the front two pinning the defensive line, we saw some ideas from the Blues of using Mount accuracy to launch Havertz at the back of the defensive line. If this combination starts to work, either finding Warner or Havertz in behind the line will give this team a primary attacking weapon, being able to play a more direct play forcing rivals to defend deeper and retreat their lines giving more space. 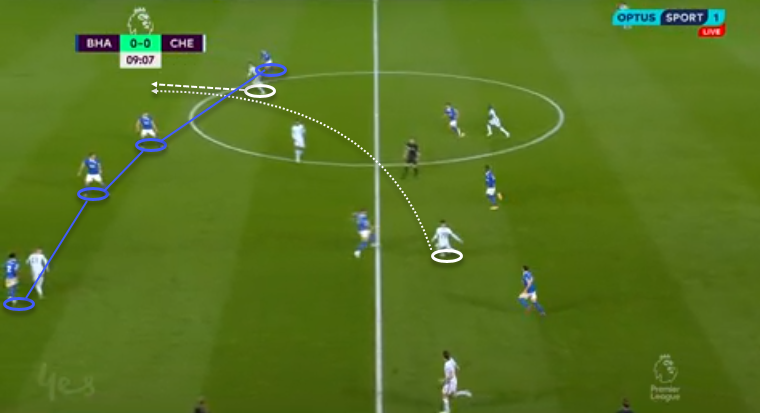 The three points earned from the visitors was the main positive aspect of this game from Lampard’s team. Some decent actions from their new acquisitions showed that they would become essential if this team wants to fight high. The Blues will need to show more cohesion for their next game against the reigning champions.

The host showed much more than expected with a team that lacked on Premier League experience, as shown in the goals conceded. Lallana transfer might be the one giving that experience to this team. Playing this way, we might see this team getting more points than expected.