Arsenal were looking to end their poor run of form in the Premier League as they hosted a similarly out of form Burnley this past weekend. Mikel Arteta’s side had not won a game in the league since their 0-1 win at Old Trafford against Manchester United, back at the beginning of November. This was also while they hadn’t won a home game in the Premier League since 4th Oct – a 2-1 win against bottom of the table Sheffield United – suffering five defeats, one draw and one win in that time since.

Prior to this game, Sean Dyche’s side had managed only one win in the league, suffering a run of results similar to the Gunners, three draws and six defeats. Burnley managed to meet their xG of 1.0 in this game, winning 1-0, although not by their own hands. Arsenal captain and frontman Pierre Emerick Aubameyang headed into his own net on 73 minutes from a Burnley set-piece to deliver Burnley the game’s only goal. The away side took away all three points as Arsenal’s wait for a goal let alone a win in the Premier League goes on.

The tactical analysis below looks at the most prominent aspects of both teams style of play. Our analysis highlights the key tactics and talking points, as well as assessing how both managers set their side up to get success. 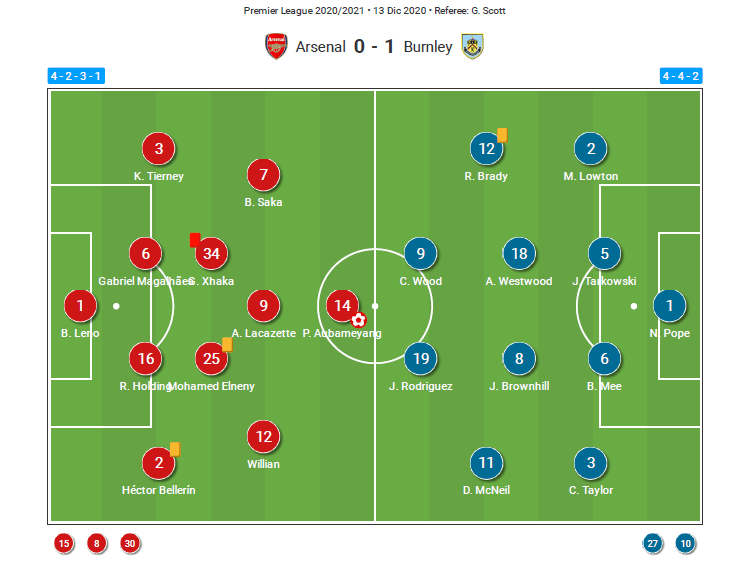 Arsenal: 4-2-3-1
There was only one change to the side that lost 2-0 to Tottenham Hotspurs the previous week. Mohammad Elneny made up one half of a double pivot beside Granit Xhaka while injured Thomas Partey returned to the physio’s table. Goalkeeper Bernd Leno kept his place in goal while the back four of Kieran Tierney, Gabriel, Rob Holding, and Héctor Bellerín were tasked with protecting their man between the posts. Alexandre Lacazette once again was tried as playmaker between the lines, supporting Pierre Emerick Aubameyang as the focal point of the attack along with Willian and Bukayo Saka who started out wide.

Burnley: 4-4-2
Dyche opted for the same XI that drew 1-1 against Everton the previous week. Chris Wood and Jay Rodriguez lead the line as a centre-forward pairing. Ashley Westwood and Josh Brownhill supported from behind as central midfielders while Dwight McNeil and Robbie Brady operated on the flanks. Full-backs Matthew Lowton and Charlie Taylor provided support in attack as centre-backs Ben Mee and James Tarkowski protected Nick Pope in goal.

Arteta’s side is efficient in the build-up, back to front they are as impressive as any top side in Europe when the attack starts from the goalkeeper. However, their slow, methodical build-up has made them predictable and easier to defend in the final third.

When Arsenal reach the final third, their attacks tend to graduate into the wide areas before attempting to penetrate. Helped by their slow progress up the field, Burnley were able to get a compact and balanced defensive shape to meet their crosses.

The Gunners attempted 32 crosses, 9 of which met a player in red, giving them an accuracy of just 28%. However, there are more issues to consider than the apparent accuracy of the crosser. How was it that two of every three crosses was met by a Burnley player?

Let’s take a look at a few examples before we digress. 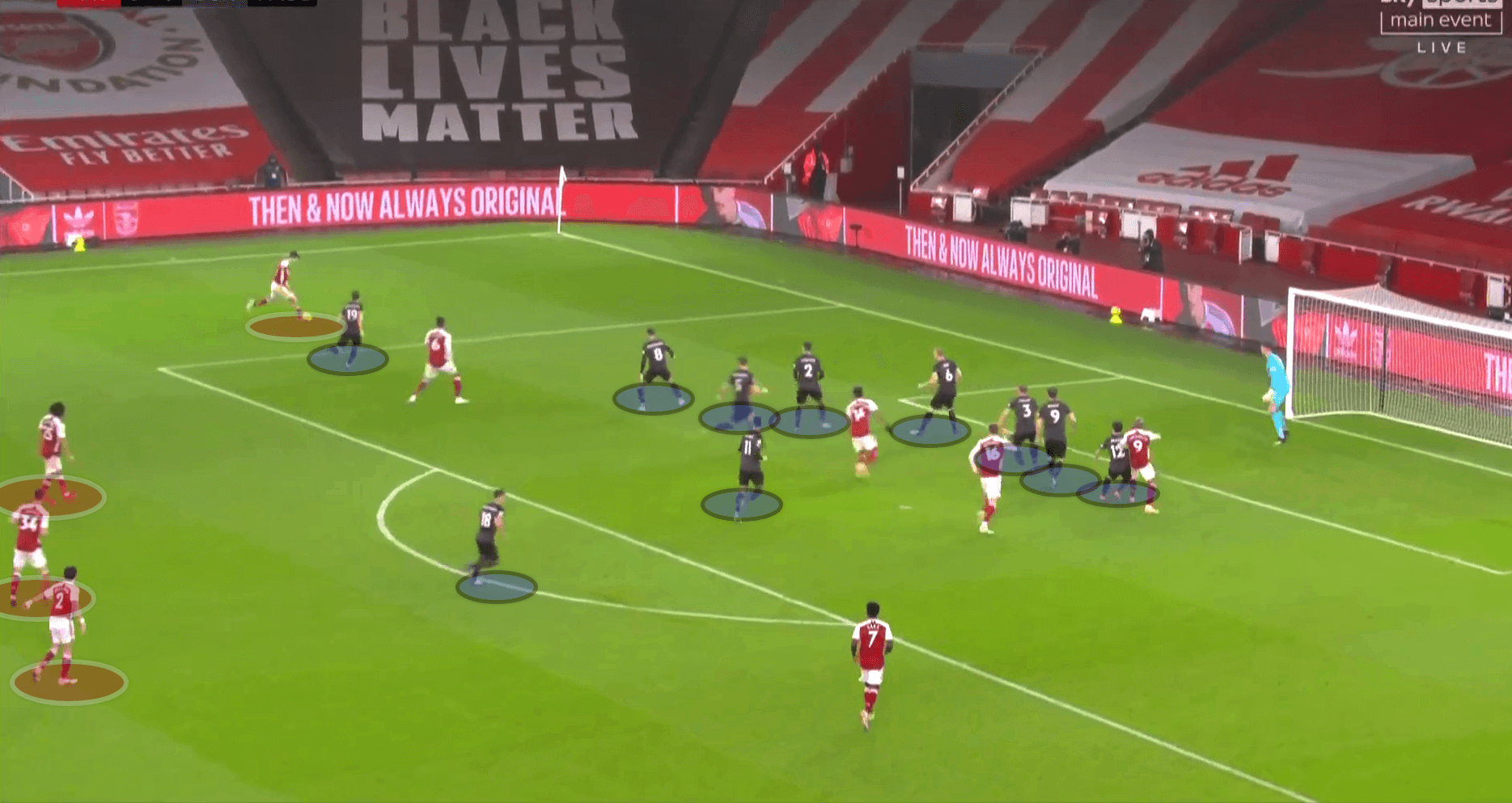 Above, we see Tierney with an out-swinging cross. As left-back Tierney is about to deliver a cross into the box, observe Burnley’s numbers and defensive organisation. Burnley have nine players in the box, all within good positions to meet the cross while neutralising the threats. Tierney still delivers but to no avail, the cross is defended. 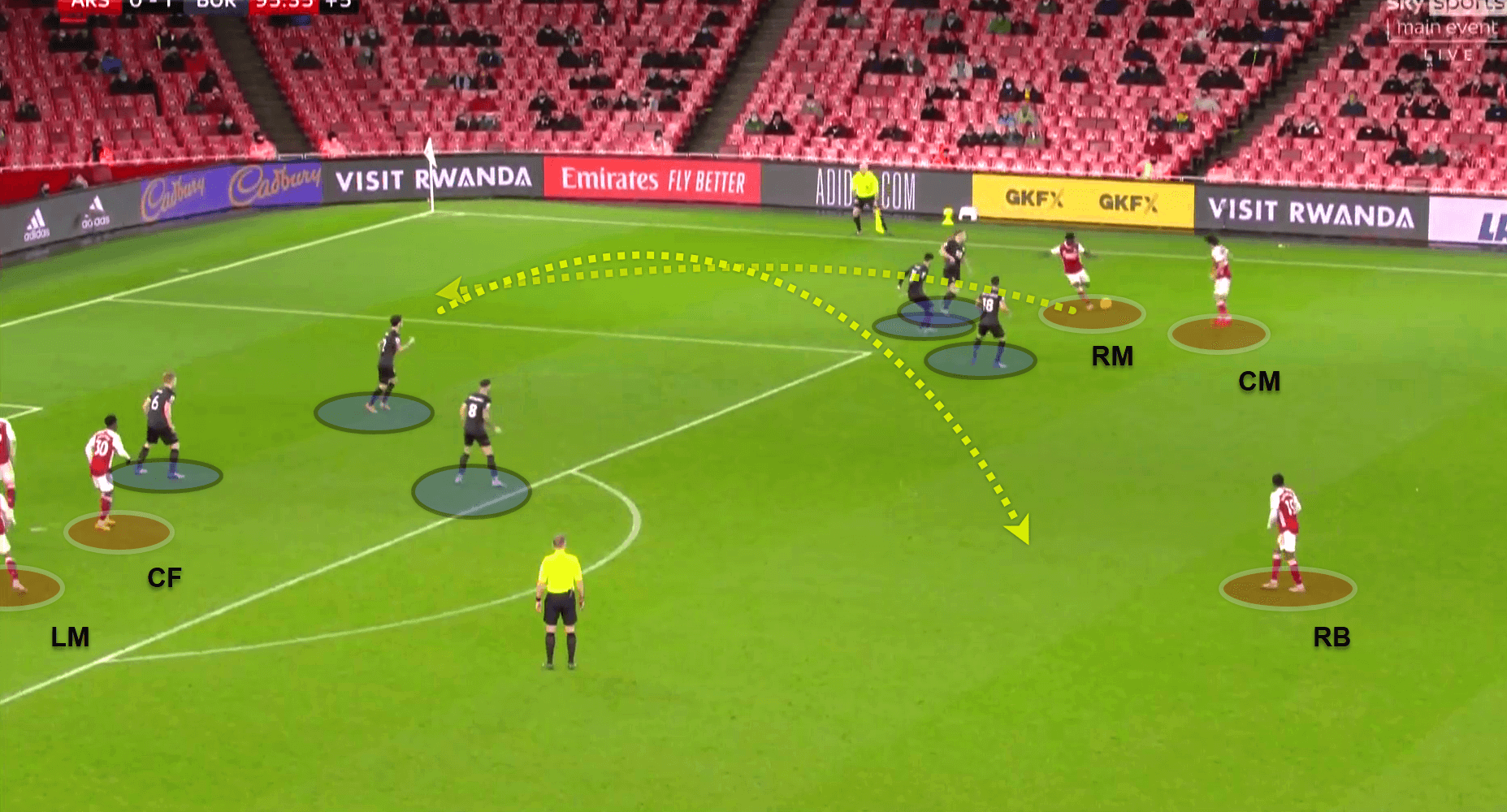 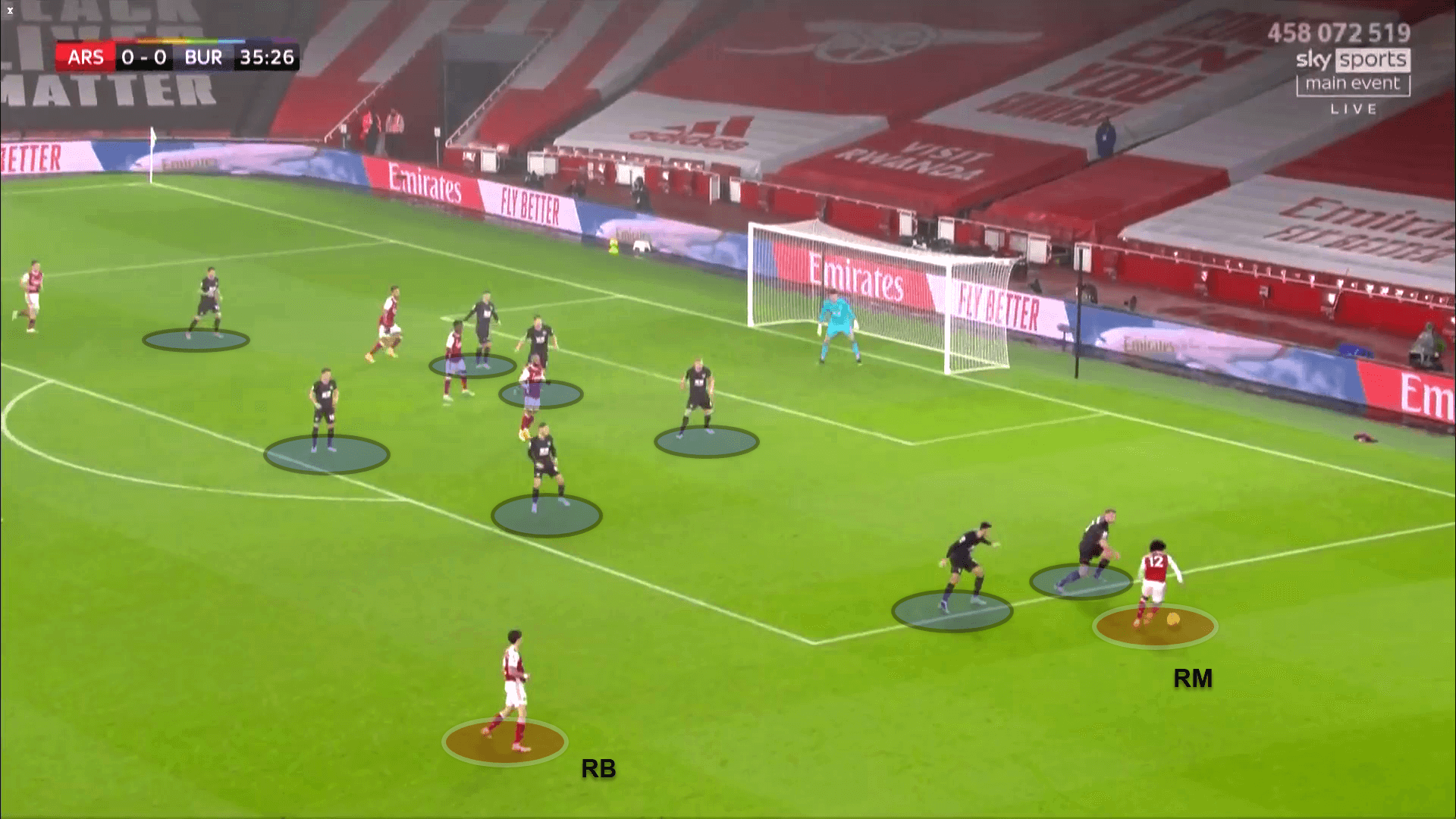 Above, Willian looks to beat the full-back in a 1 v 1 to create an angle to cross with his right foot. Willian accelerates a short distance to the by-line before crossing. Observe the defensive organisation of Burnley, to defend front and back post as well as the six-yard box and cut-backs. 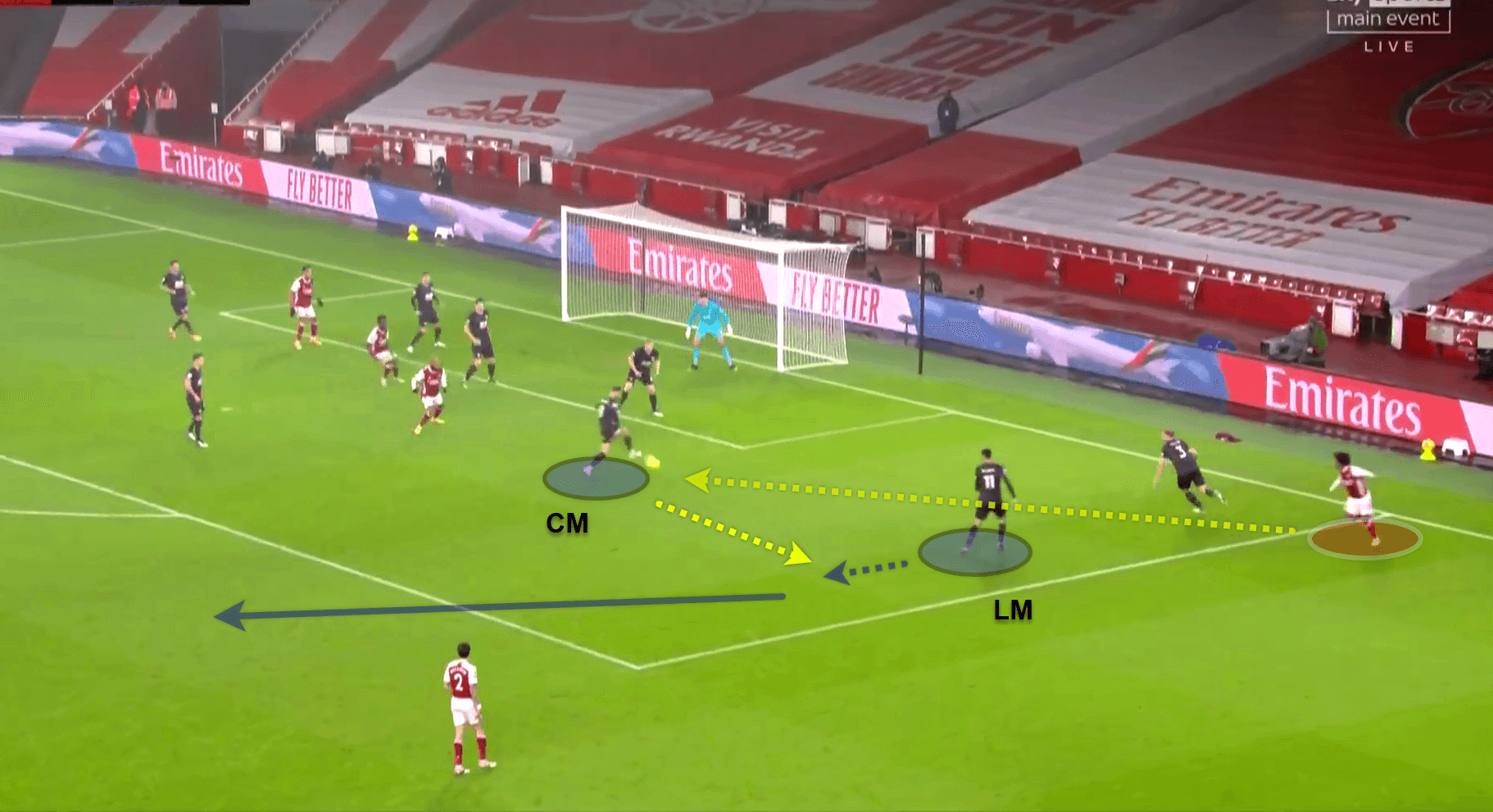 Continued, above, Willian’s low-cut-back cross is cut out by the Burnley CM, on the second touch he plays to the LM, and so the transition to defend begins for Arsenal. 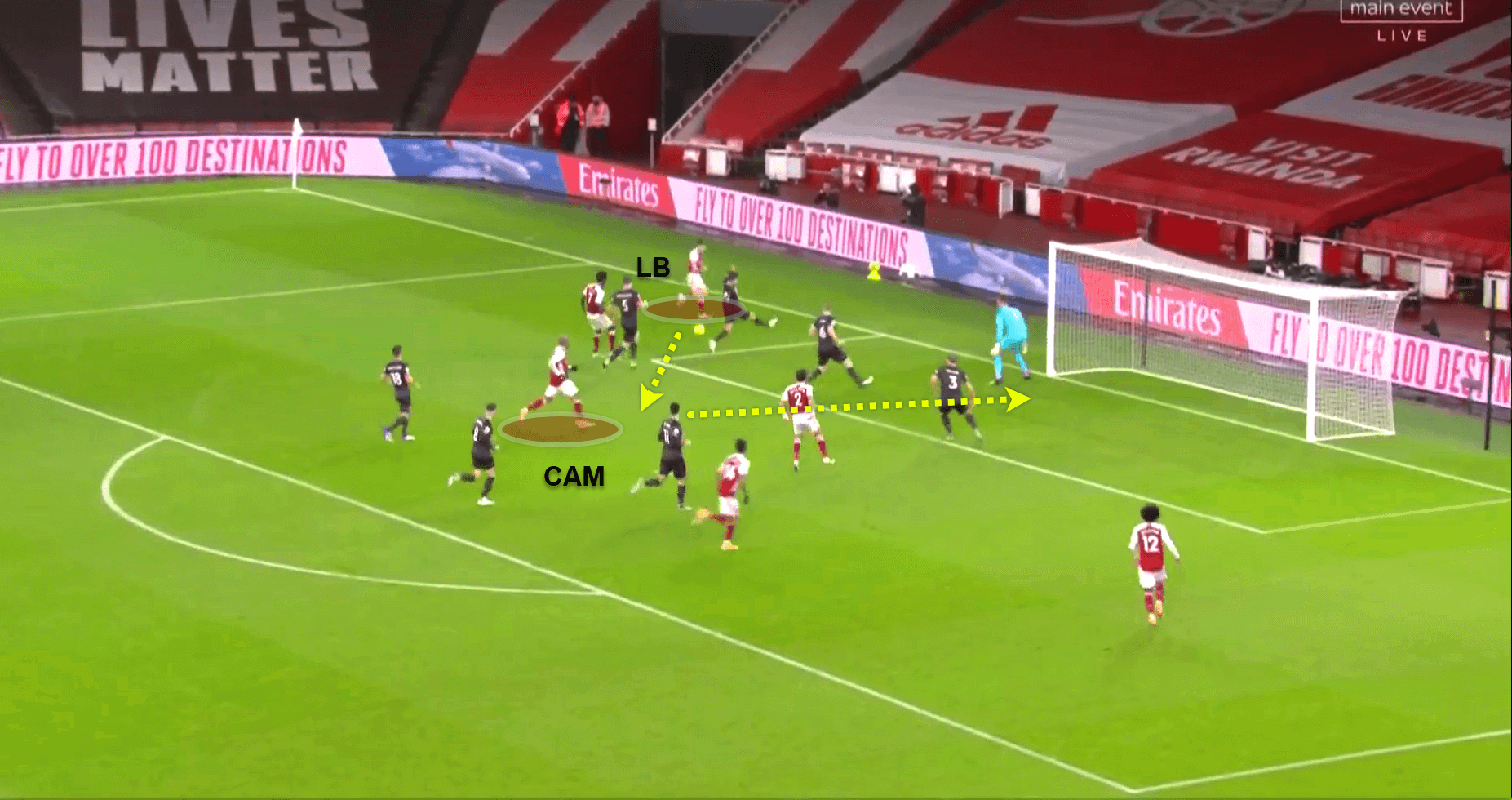 A culmination of factors can help us better understand why Arsenal had little success by way of crosses. As Arsenal built up the play to the final third, Burnley were prepared and they occupied a proficient defensive shape. The eventual crosser of the ball, whether it was a winger or a full-back, always seemed very lethargic and apprehensive before delivering, sometimes taking two or three touches before crossing, giving the Burnley players ample time to adjust for the cross.

The delay in crossing meant the forwards who ran into the box moments earlier were now static and more comfortable to defend against, as well as robbing them of their forward momentum to meet a cross at pace. The majority of Arsenal’s crosses were out swinging crosses – this throws up a few challenges, one is the crosses must be delivered more towards the penalty spot to avoid the goalkeeper claiming the ball in the air. Also, it is easier for a defender to head away a ball that is going away from goal, versus an in-swinging cross which has forward momentum and dip around the goalmouth.

Finally, very often the crosses simply lacked pace, as all manner of crosses with the exception of a few low-cut-back crosses in the box, only seemed marginally quicker than a floating cross. This minor but significant detail meant the Burnley players could adjust their body shape and position as they jumped to head the ball away.

While it was 11 v 11, Burnley were more concerned with consolidating for Arsenal’s attack. With phases of possession as low as 20%, particularly before Xhaka’s red card, Burnley looked to nullify the Gunners with two-banks of four behind the ball while centre-forwards Jay Rodriguez and Chis Wood were the targets in the transition to attack. Offering as much depth as possible to be a threat, one centre-forward would move into the channel to receive a pass in space while another would remain central to receive and hold up the ball.

In the moments Burnley had to restart from the back such as goal-kicks, distance was always the preferred option. Aiming to win first and second balls against Arsenal’s back-line, Burnley were direct as the wide players and central-midfielders came narrow and close to support the centre-forwards. 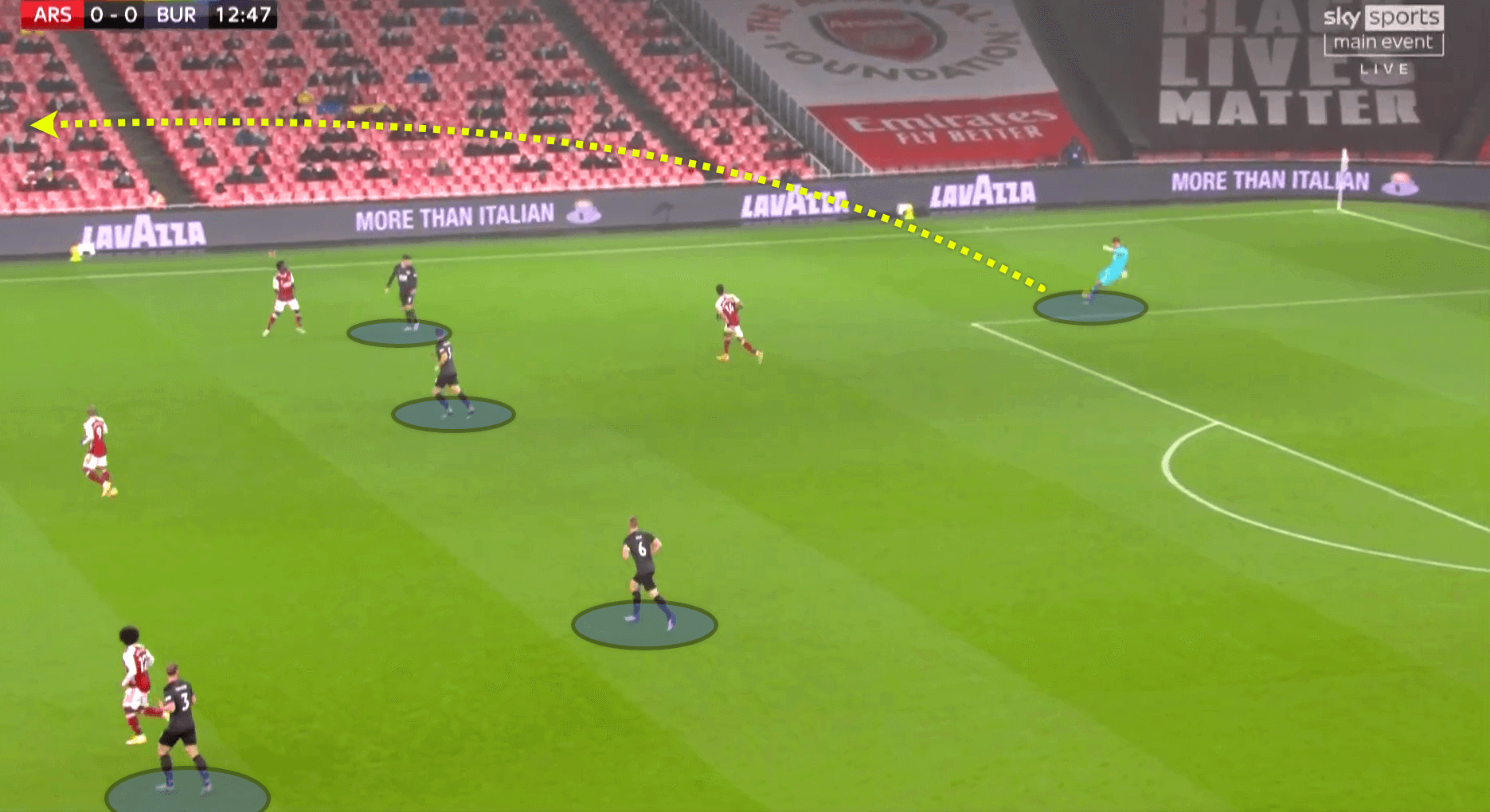 Above, moments after receiving a pass back, Nick Pope adjusts his body before playing a long-pass to the centre-forward on the edge of the Arsenal third. Notice Arsenal drop in anticipation. 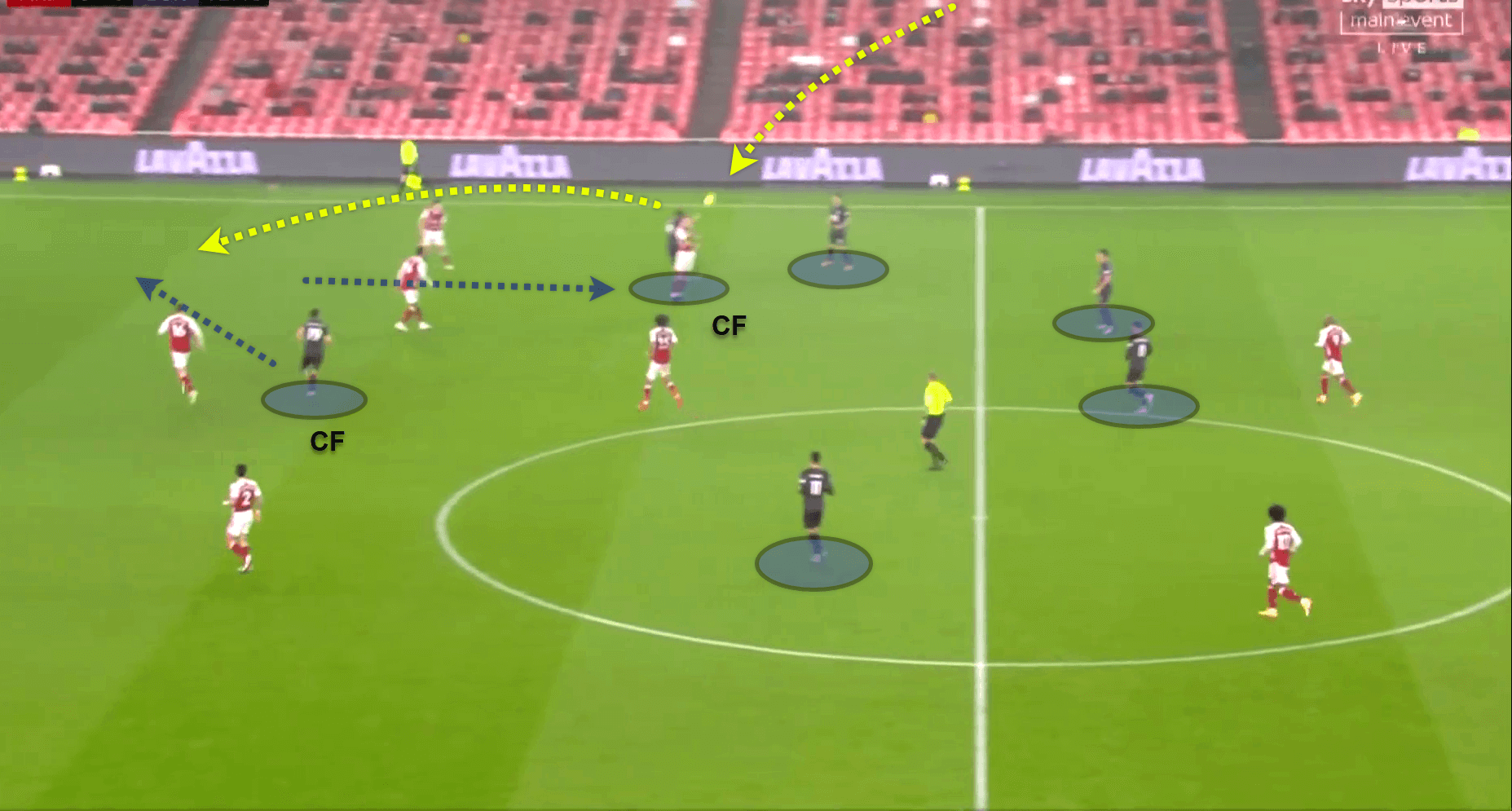 In the image above, we see a training ground move, both centre-forwards interchange horizontally and vertically. Wood, the CF competing for the ball, comes from high to low to meet the ball at his highest point. At the same time, Rodriguez CF makes a run across and into the space vacated by Wood. Wood wins the header and flicks on the ball into the run of Rodriguez. 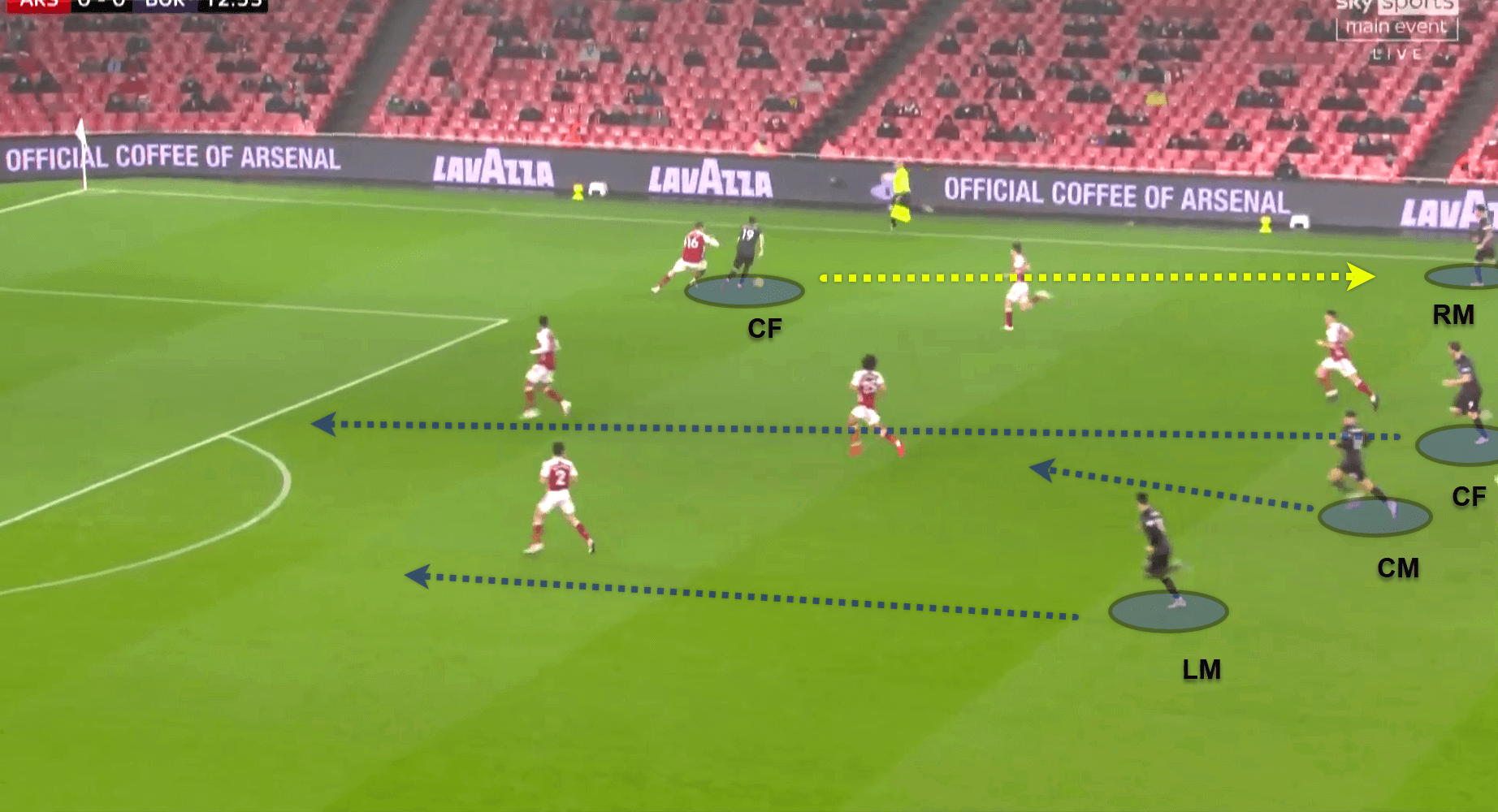 Above, we see Rodriguez protects the ball in the channel, forcing Arsenal’s defensive unit to one side Burnley’s midfield and forwards move quickly to exploit as Rodriguez turns to play a pass to the RM. 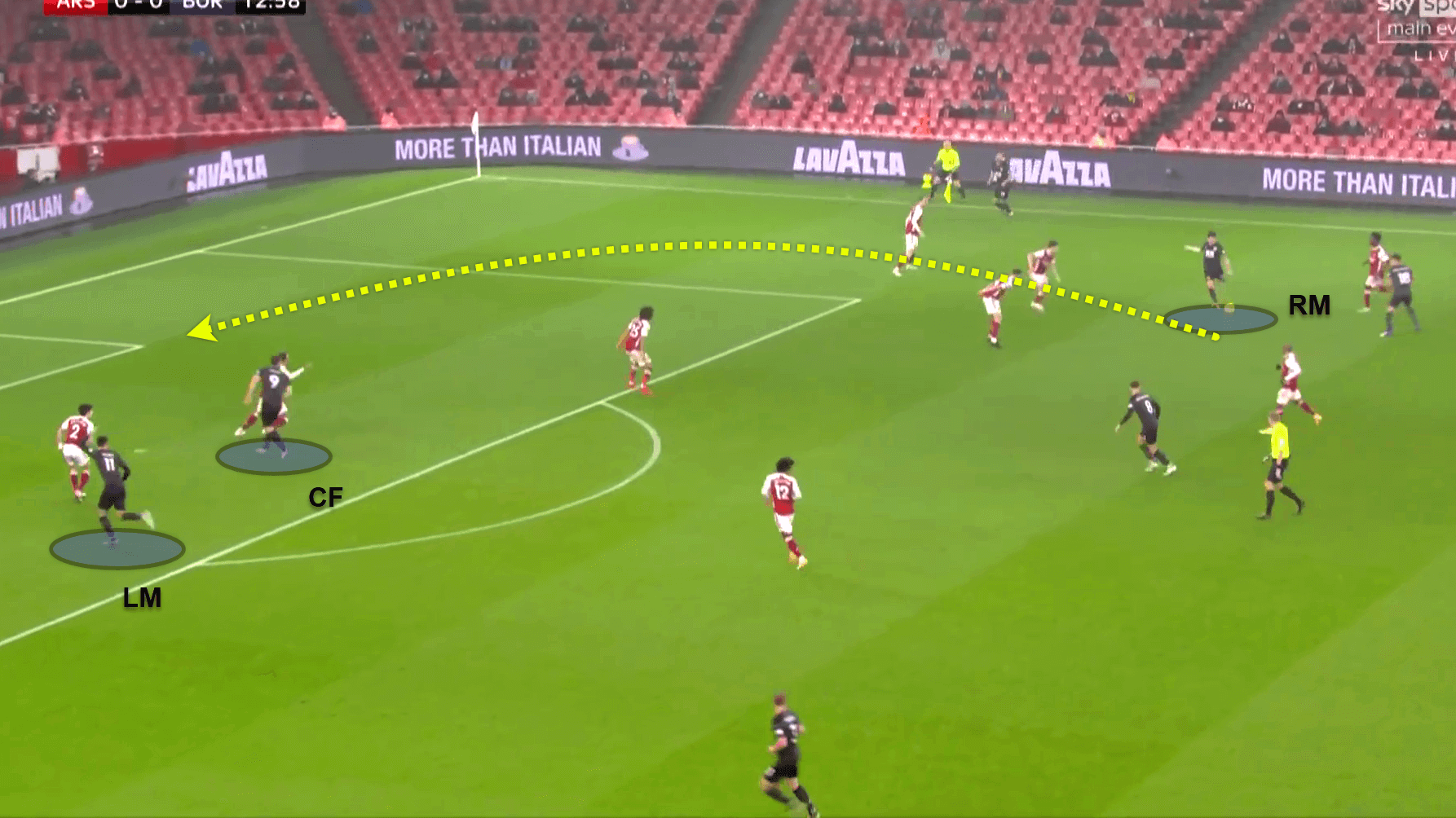 Finally, the RM dribbles inside, creating an angle to deliver an in-swinging cross. At the same time, the CF and the LM offer a front and back post option against the two recovering Arsenal defenders. The RM delivers a well-timed whipped cross which is met by Wood, on his run. He heads wide, failing to capitalise on what was Burnley’s best chance from open play.

Burnley did not create much from open play, averaging only one attack every three minutes, with only three shots on goal from open play  Burnley needed to be efficient in front of goal. In principle, Burnley’s decisions to cross, pass or dribble in the final third was primarily based on Arsenal’s defensive imbalances phase by phase. Not playing for crosses or long passes necessarily, however with more reaction to the opposition’s chape.

Arsenal countered with a disciplined 4-5-1 shape in the final third, looking to force Burnley into making mistakes in high-pressure situations with sustained intensity.  Until the pressure dropped off when Arsenal went down to ten men, Arsenal’s PPDA was as low as 4.5 at phases.

The natural order of Premier League management would have us presume that Arteta will keep his ideas about personnel and tactical changes confidential until we see them actualised in upcoming games. That is unless the Spaniard believes he should persist with his current players and methodologies in the attack. Defensively, the Gunners are doing well to reduce their opponent’s xG both home and away, yet one can’t help but wonder how their lack of success at the other end of the field is giving teams confidence in the latter stages of the game to attack.

It should be said, teams that do get success from crosses often do so when crossing is but one option of a varied approach. Arteta’s relentlessness to score by crossing is only giving teams more confidence to defend when they visit the Emirates as they are left with little to no surprises when defending.

Quality of delivery as well as timing and movement should be factored in for crosses, and of late the Gunners seem to lack pace and whip on the ball when it’s required, while the forward’s movement in the box is a bit stagnant and predictable, making their chances of scoring unrealistic quite often.

In contrast, this result should help Dyche’s Burnley side build confidence and perhaps put a string of results together in the coming weeks. Defensively they are sound, their challenge lies in finding the target from open play. Yet, as we enter the hectic Christmas period, Dyche will do better than most using his experience to see out games against more formidable opposition.

Up next, Arsenal welcomes the Premier Leagues in-form goal machine, Southampton, on Wednesday night while Burnley hosts a Wolves side keen to return to winning ways.