This week in the FAWSL, Chelsea Women took on Brighton and Hove Albion Women away at The People’s Pension stadium coming away with three points. It was a hard-fought victory which keeps Chelsea in the hunt for the title. This was especially important after Manchester City Women’s victory over Arsenal Women earlier with a last gasp winner by Caroline Weir.

This tactical analysis will explore the tactics employed by both managers and how Chelsea managed to secure three points. 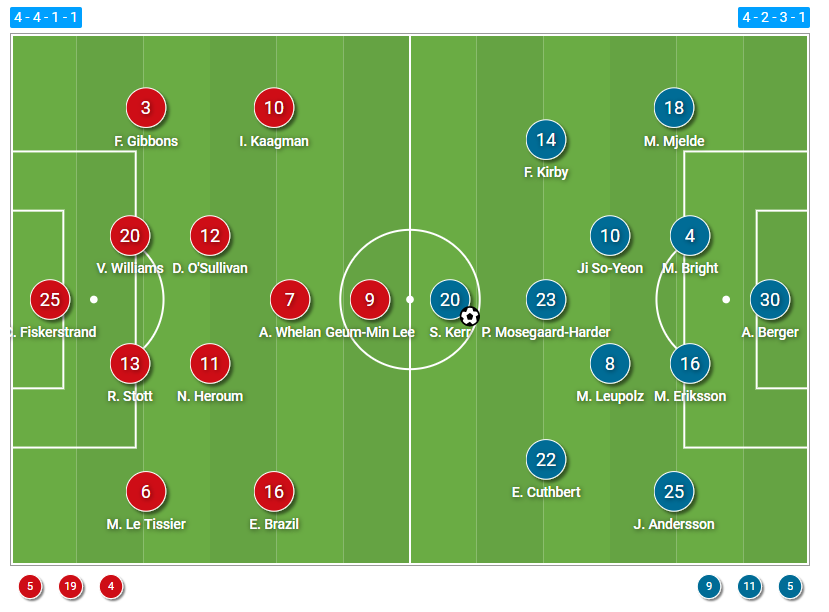 After beating Benfica 5-0 in the start of their UEFA Women’s Champions League campaign, Emma Hayes made three changes to her starting line-up. Sophie Ingle, Guro Reiten, and Bethany England were replaced by Melanie Leupolz, Erin Cuthbert and Sam Kerr. Alongside Pernille Harder and Fran Kirby, Chelsea posed a threat going forward which was needed to breakdown a side that was going to be tough to penetrate.

Brighton & Hove Albion made five changes from their last game against Tottenham Hotspur Women, with Ellie Brazil making her first start in over a year after recovering from an ACL injury sustained last year. Cecilie Fiskerstrand also replaced Megan Walsh in goal.

After a convincing 3-2 win over West Ham Women last week, Chelsea would be expected to find a way to breakdown yet another tough opponent who would come up with predictable tactics. Chelsea Women’s approached this game in their traditional 4-2-3-1 system that has afforded them the luxury of playing four of their several attacking players. The strategy was to play through the half-spaces and create gaps in Brighton’s compact defensive line.

Chelsea’s build-up play was through the central areas through Melanie Leupolz and Ji so-Yun to pick up possession when there was no immediate pressure from Brighton’s forwards. Brighton didn’t offer much in terms of pressing high. They were happy to sit back and create a compact shape so once again Chelsea couldn’t play through the central areas. Because of this, Chelsea were able to position themselves very high up the pitch where the full-backs were perennially positioned high as the image below suggest. 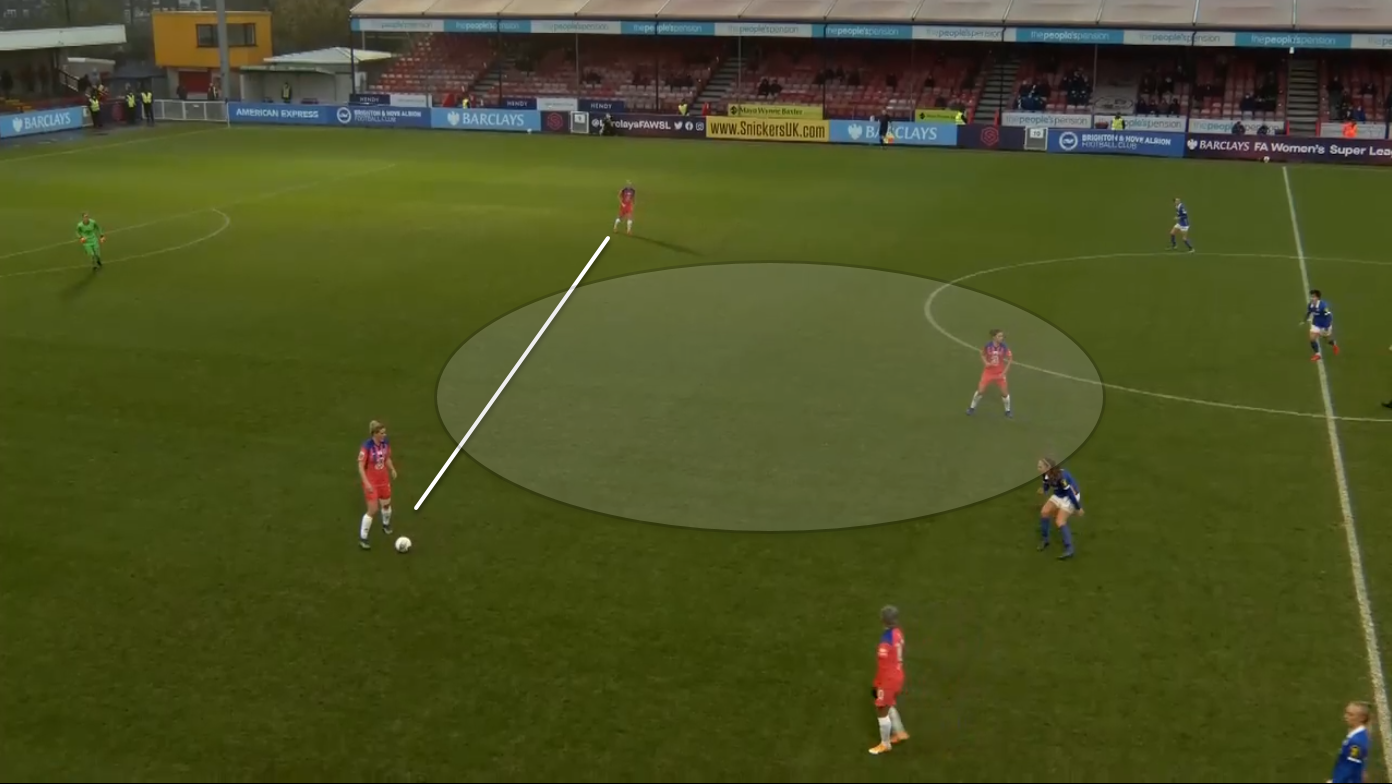 As this image suggests, Chelsea were able to start their attacks so high with the two central midfielders able to control possession from midfield. So much so that Ann-Katrin Berger played as an outfield player with Brighton only interested in defending and counter-attacking. Theoretically, being so high with full-backs playing in advanced positions means they have two-three players at the back along with multiple attackers. This gives Chelsea an outlet which forces the opposing team to commit resources and opens up spaces elsewhere. 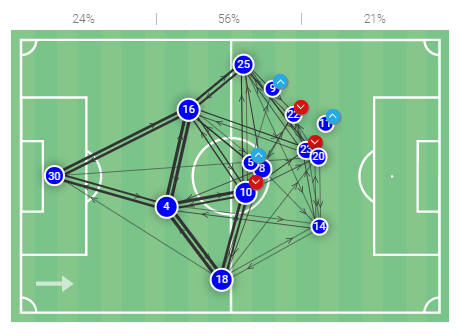 If we look at this pass map, you can see how the two full-backs are positioned high up the pitch with the rest of the Chelsea players positioned centrally. This brings us on to the point of Chelsea’s forwards playing very centrally. The common theme between these forwards is their tendencies to play very narrow considering they all want to occupy similar positions. Kirby, Harder, and Cuthbert are very central players with the idea of overloading the half-spaces along with the full-backs.

The role of Pernille Harder becomes extremely important in this situation as she becomes the extra player when the winger and full-back look to overload and get in behind. 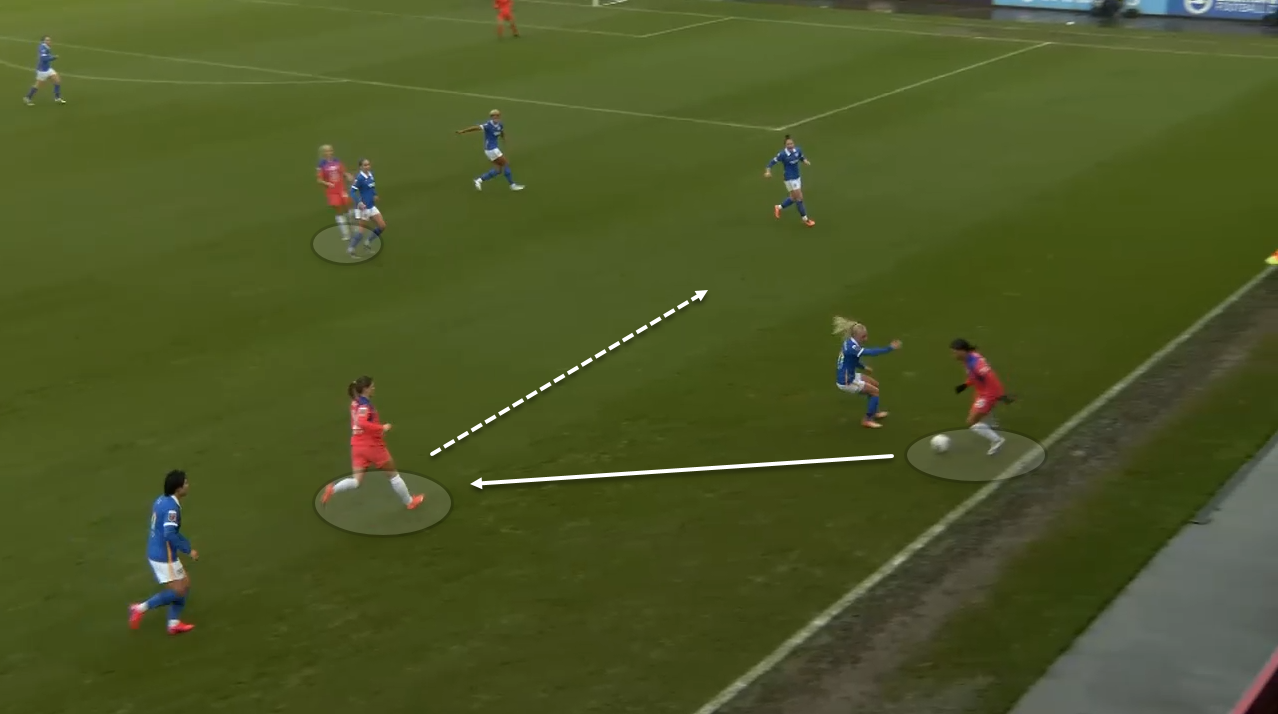 Above, we can see an example of the front four exchanging positions trying to create openings between the lines. Here Kerr moves from a central position to a wide right position taking a pass from Maren Mjelde. We can see four Brighton players but Harder is also moving across to provide a passing option. 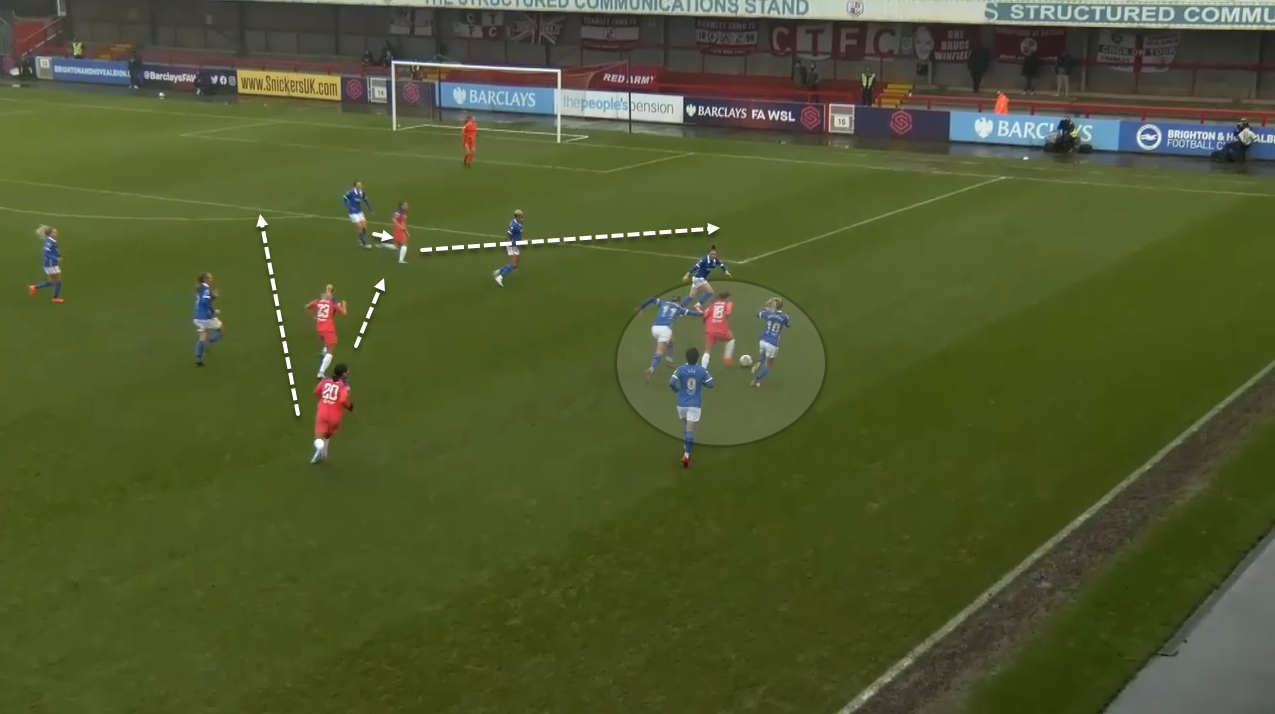 Mjelde takes the return pass and drives forward attracting these players towards her. Meanwhile, Kirby can be seen making a diagonal run to both distract the two Brighton defenders and passing option.

Chelsea use this tactic against teams that tend to sit back and counter-attack. The goal came from a similar situation where Chelsea were piling on pressure through crosses. A poor clearance meant the ball fell at Harder’s feet who plays a quick one-two exchange with Jonna Andersson and manages to find space in behind the full-back. The resulting cross combined with great movement from Kerr meant the Australian found space to score.

From Brighton’s perspective, their main game plan was to stop Chelsea from scoring and when the opportunity arose to find space on the counter-attack. Given they didn’t have many attacking chances with only five shots registered and zero on target, it makes sense to focus on their attacking play. Brighton had moments of good build-up and managed to string together a few good passes. They didn’t always resort to long passes and attempted to play out from the back but what was most impressive was their defensive work which limited the Blues to a solitary goal. 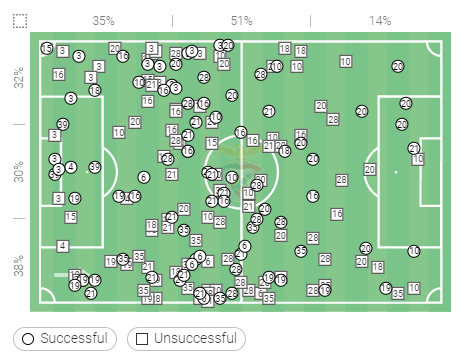 If we look at this duels map, it’s clear to see Brighton were worried about Chelsea’s wide threat that the frequency of duels were high in the wide areas. It’s a tactic that teams have identified and tried to use to limit Chelsea’s attacking influence. In the FAWSL, only Manchester United Women, Birmingham City, and Arsenal Women have limited Chelsea to one goal. Teams are slowly trying to figure out how to limit Chelsea from attacking and it seems like overloading and ensuring runners in behind are stopped is an effective strategy. Part of this strategy includes using a compact shape and low block. 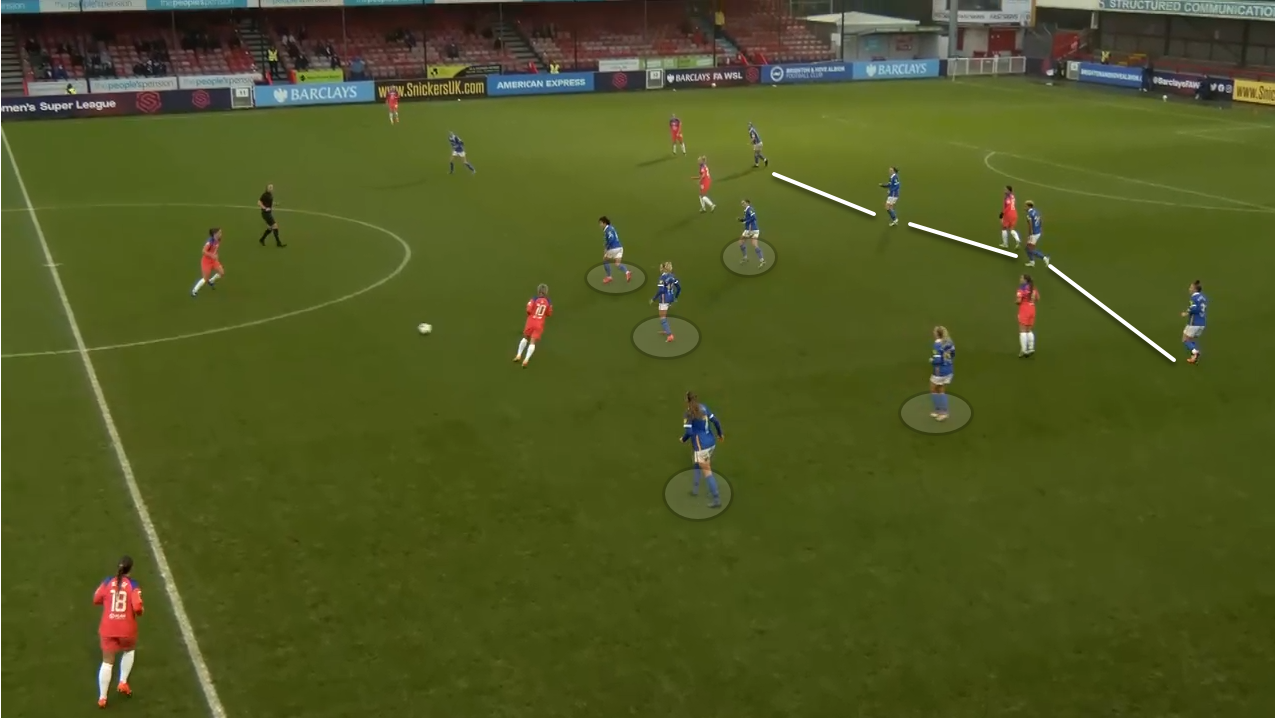 Brighton adopted a low-block 4-4-2 system out of possession which allows them greater defensive coverage across the thirds. One of the advantages of using such a system is that it potentially looks to limit the influence Chelsea have through the middle thus stopping Ji and Leupolz from being creative in midfield. Though the full-backs needed to be disciplined and defensively alert as they played a very important role in this system.

As we indicated earlier, Chelsea mainly used the wide areas to attack which was partially forced into by Brighton’s want to keep the central areas compact. The image above shows Brighton either man-marking or blocking a passing lane to a Chelsea player. Maya Le Tissier played particularly well and defended diligently enough to keep Cuthbert occupied. 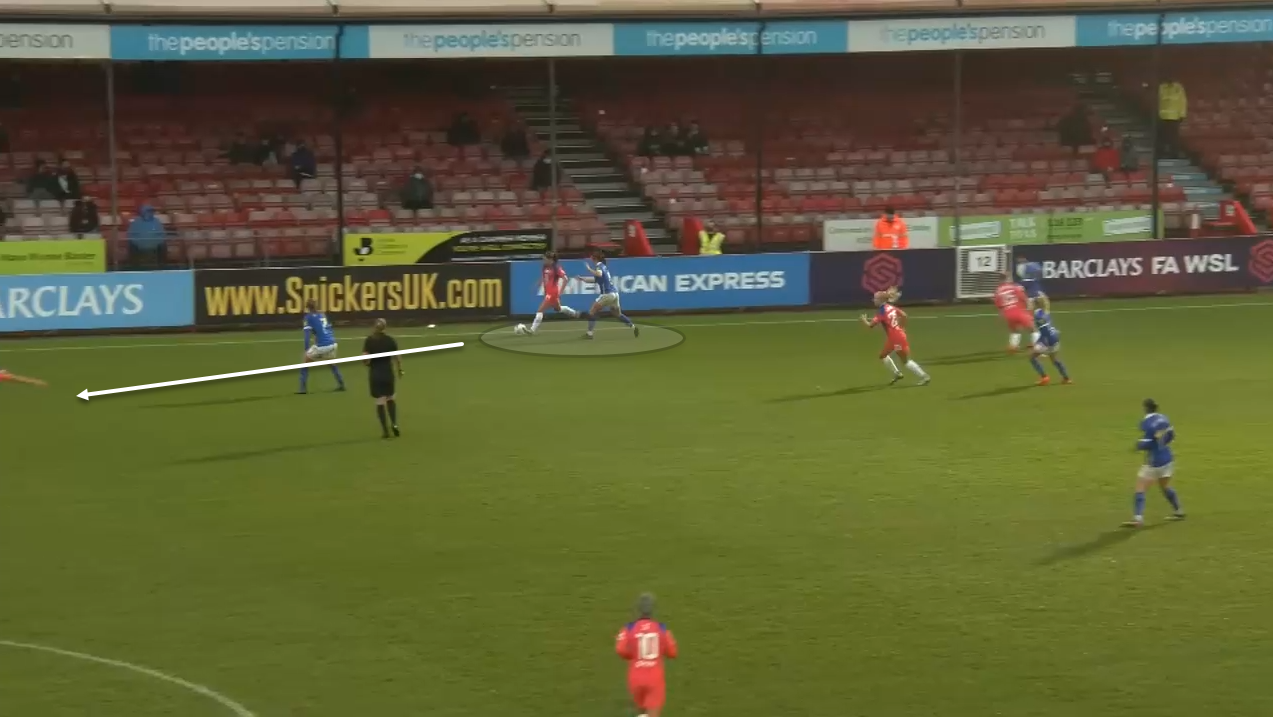 In this example, we can see how the Brighton full-backs were instructed to be aggressive in their pressing and marking when possession reached any of Chelsea’s wide players deep in their own half. Le Tissier ensures Kirby doesn’t have space to go in behind. Felicity Gibbons on the opposite side played a similar role. 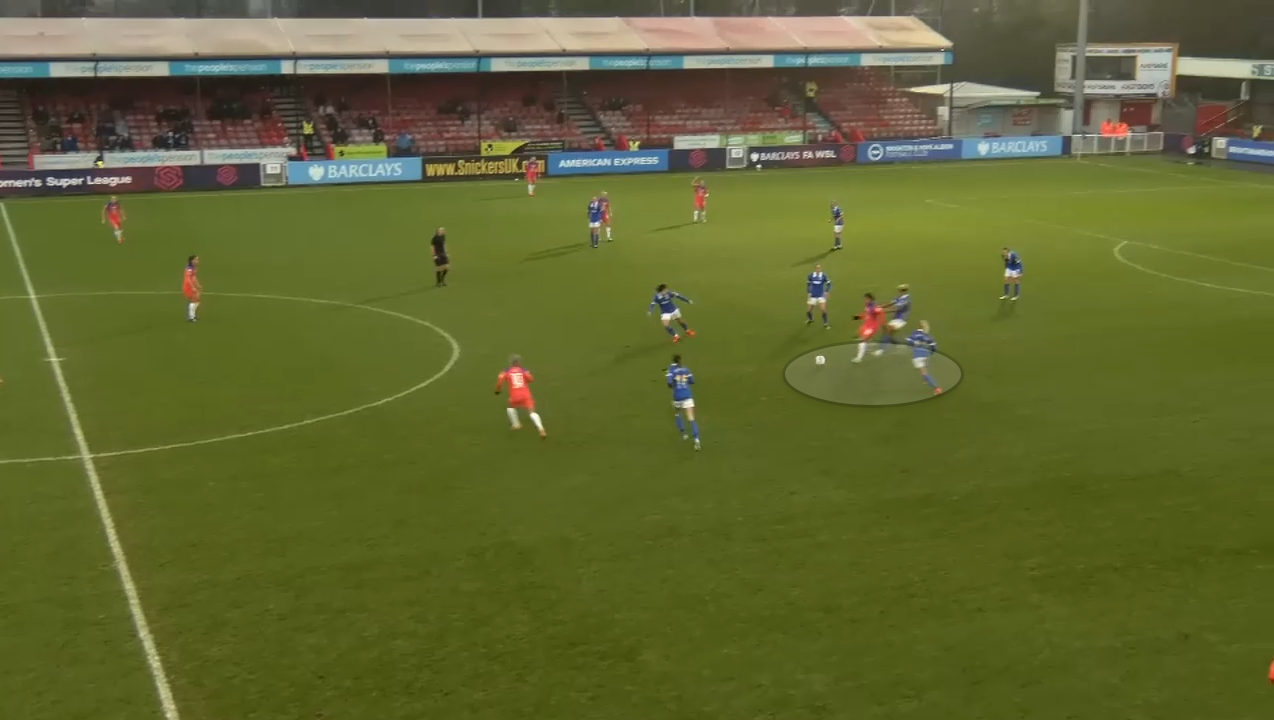 Their overall pressing tactic was more based on movement and positioning of Chelsea’s forwards. Any time Chelsea moved central in midfield, Brighton would commit numbers across and deny them space to penetrate. Their pressing strategy involved swarming Chelsea the closer they got the 18-yard box as is shown in the image above. When Kerr received the ball she was immediately closed down by the central defender and forced to pass back. As the game wore on, particularly in the second half, Brighton changed their tactics and went for a slightly more aggressive pressing style moving into a mid-block.

Though Chelsea Women came away with three points, the analysis has shown they were effectively kept quiet for periods of the game. Chelsea need to find a better way of breaking down stubborn low-block sides who will keep the spaces compact and small. Their form has been inconsistent and are not operating at 100% which can only improve as the season progresses. Brighton can take heart from their defensive performance but it is going forward where they will need to improve.