In Leonardo Jardim’s second game back in charge after former Arsenal legend Thierry Henry was sacked, Monaco were denied a victory by a late Andy Delort penalty at high-flyers Montpellier in Ligue 1. Montpellier have been performing above expectations in Ligue 1 and find themselves in fourth place in the league table.

Their success thus far has hinged on their impressive defensive record, having conceded just 19 goals this season. This defensive record in only bettered by league leaders PSG. Monaco’s struggles this season have been well documented. Following this 2-2 draw, Monaco remain in the bottom three in Ligue 1 and currently occupy the relegation playoff spot. Having taken the lead twice in this game, they will be disappointed to leave La Mosson with one point rather than three. 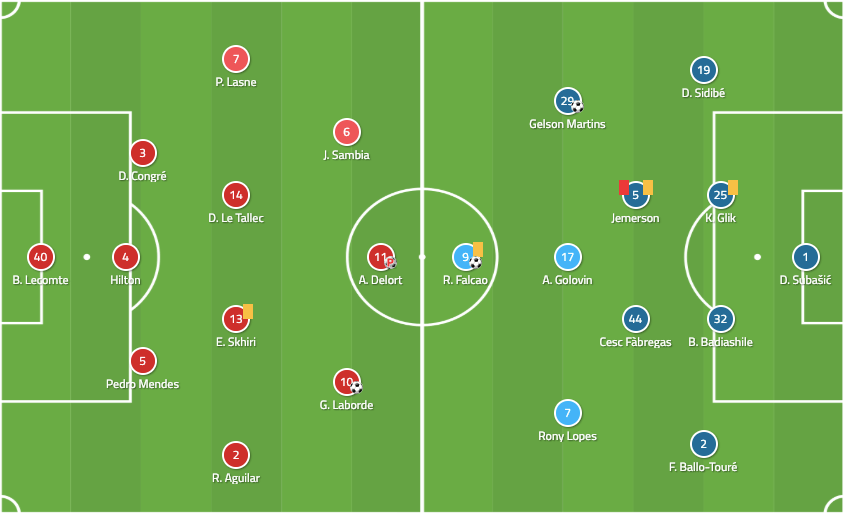 Jardim named an unchanged side from the victory against Toulouse in Monaco’s previous game. Monaco set-up in a 4-2-3-1 with Jemerson and Cesc Fábregas working in a double pivot. Lopes, Golovin and Martins were given free licence to drift around the attacking areas of the field when Monaco had the ball, looking for dangerous spaces to occupy and affect the game in a positive manner.

Given that former Manchester United forward Falcao looked set to be working against a back five at times it was vitally important for Monaco that Martins, Lopes and Golovin were actively involved in the game in attacking areas of the field.

Montpellier operated in a 3-4-2-1 formation and made just the one change from their previous fixture as Michel Der Zakarian brought in Sambia to replace Mollet. When Montpellier didn’t have the ball they would retreat into a 5-4-1 formation as they looked to nullify the creative talent that Monaco has in their attack.

Laborde and Sambia were asked to provide support to lone frontman Andy Delort. The two attacking midfielders would take up dangerous positions in the half-spaces close to Delort and the width would be provided by the adventurous Aguilar and Lasne. Below are two examples of how Montpellier’s attacking shape looked and the movements of the various players. 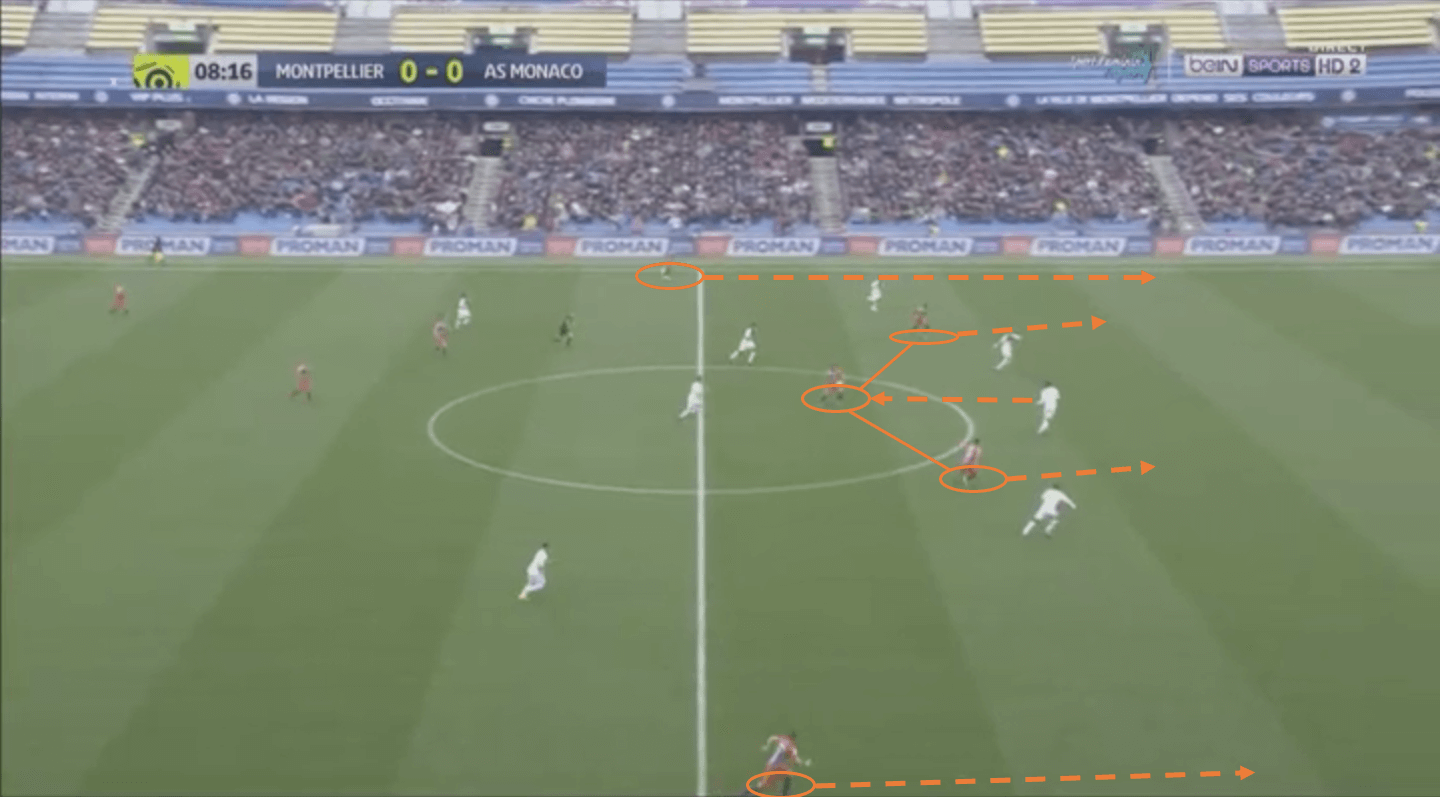 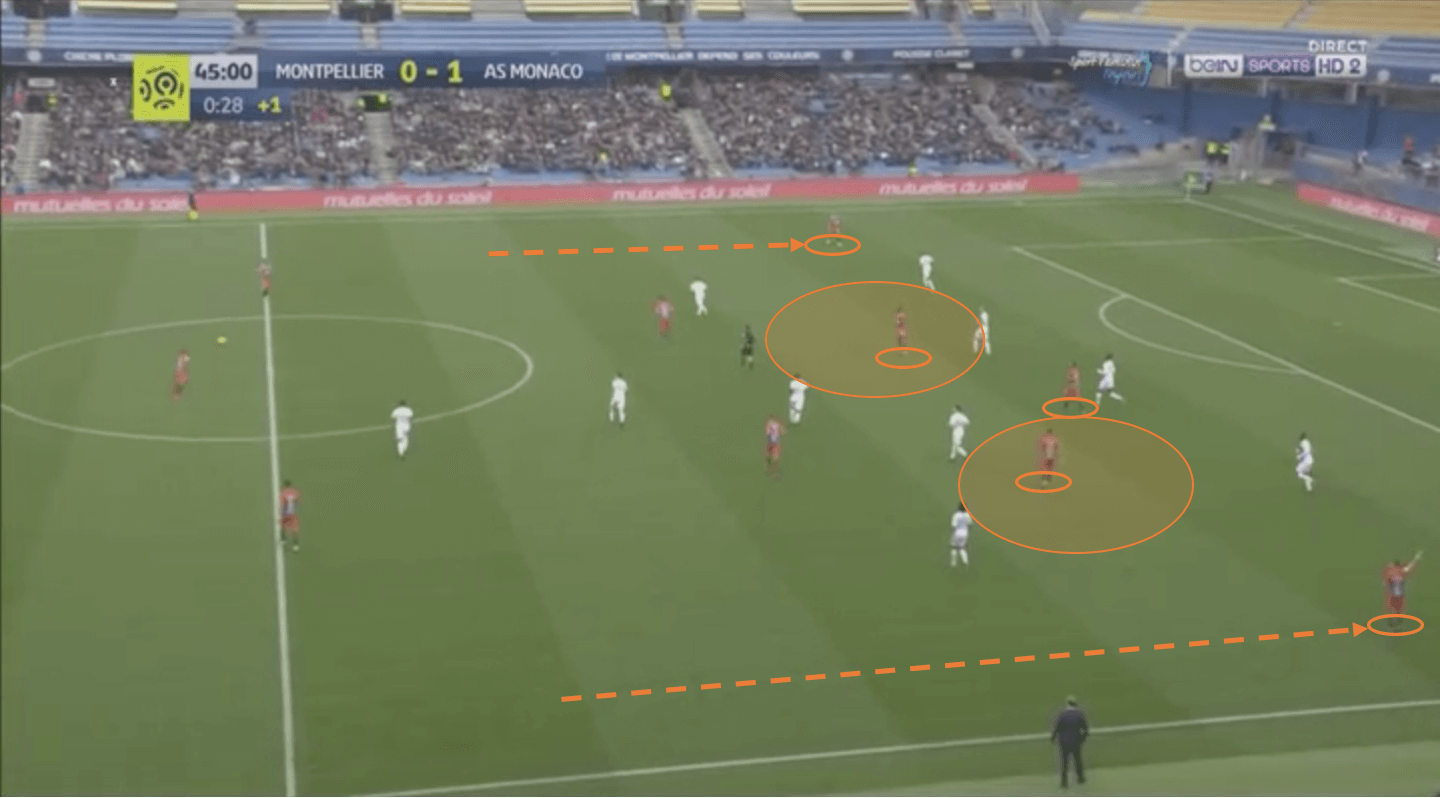 Monaco attack with numbers in the box

Given the potential isolation of Falcao against three Montpellier centre-backs it was important that the other Monaco attackers were willing to get themselves into the box. With more numbers in the box Monaco could negate Montpellier’s numerical advantage in this position. In addition to this, the crosser has more targets but can also float the ball into dangerous areas and expect a teammate to be in a good position to receive or attack the ball.

This proved very effective for Monaco in the early parts of the first half and eventually led to the opening goal. The first example below is a minute before the first goal and shows how Monaco were willing to put numbers into the box. In particular, you can see how they looked to isolate Montpellier defenders as they have done at the back post. 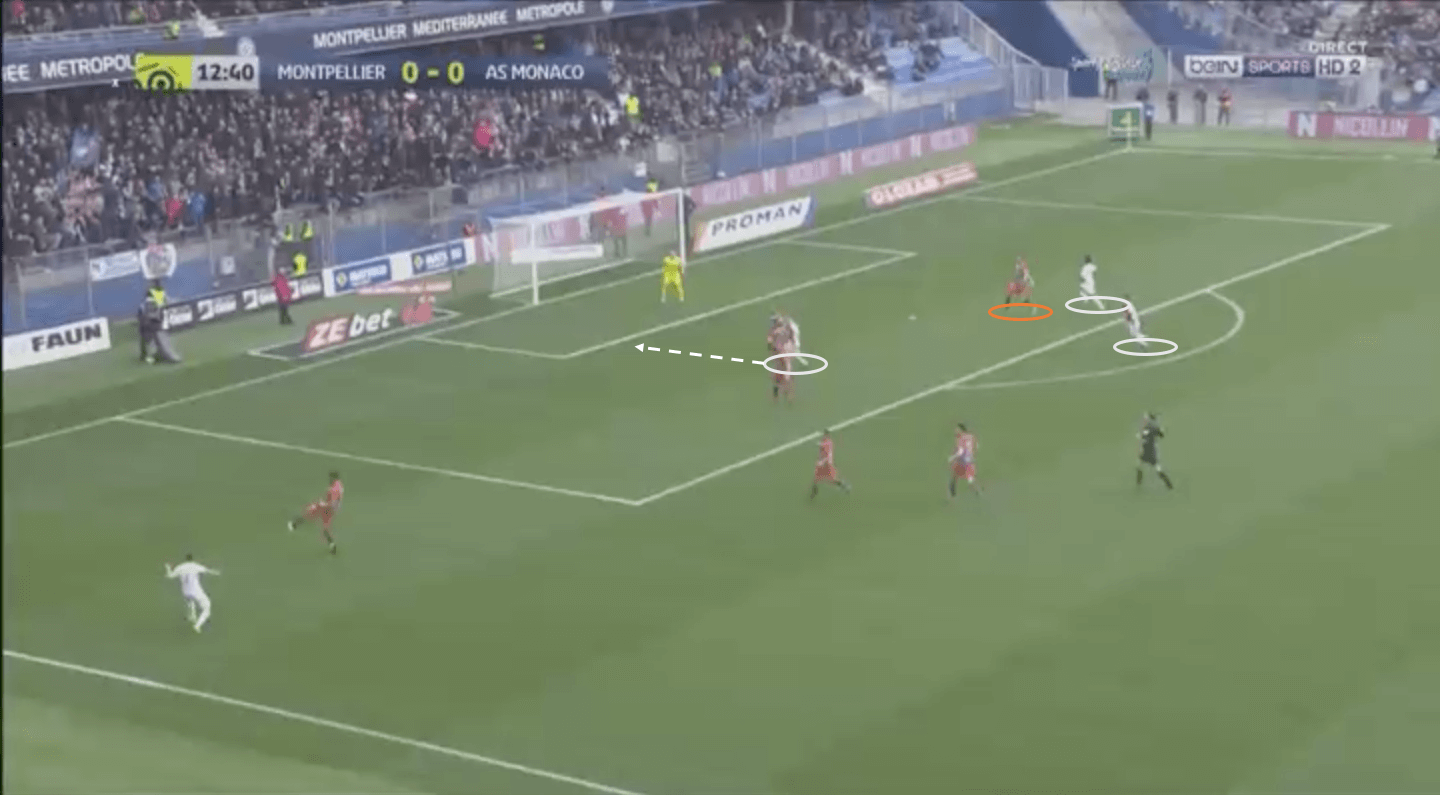 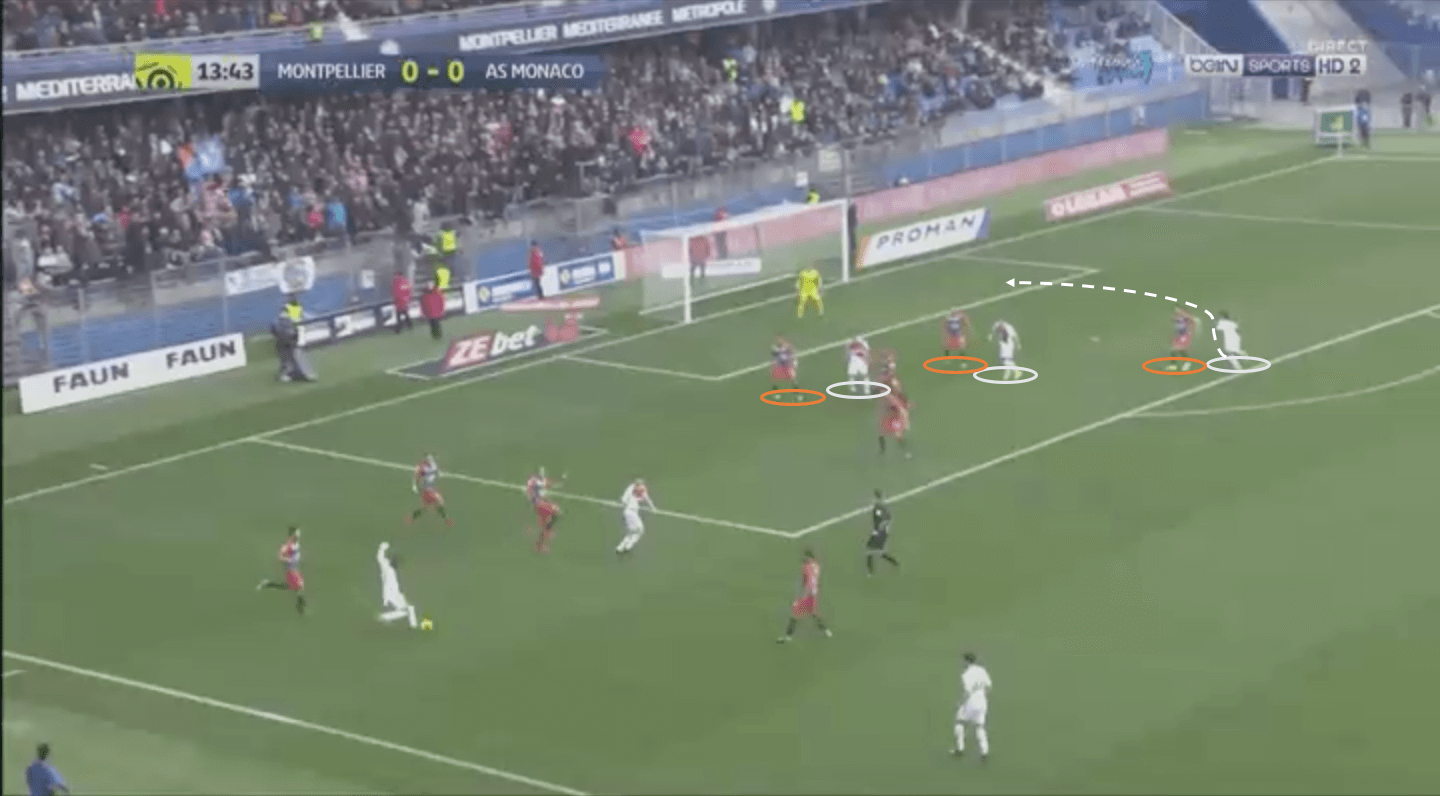 The goal comes from a very similar situation. Three Monaco attackers have aligned themselves with a defender in a one-on-one situation. All that is needed by an attacker to create a chance in this situation is a little bit of movement to create half a yard.

Gelson Martins does this perfectly. He drags the Montpellier left wing-back towards the edge of the box before spinning into space behind him. The ball finds the Portuguese winger at the back post for an easy tap-in.

While Monaco were happy to build slowly and methodically through the thirds of the pitch, Montpellier were more focused on moving the ball into their attacking third as quickly as possible through direct, vertical passing. However, this passing wasn’t simply long route-one balls, but instead measured passes to break the lines.

These were typically sent into the feet of Delort, as in the first image in this article. Montpellier looked to create 3v3 situations with the ball into Delort’s feet and rely on him to lay the ball off or turn and drive towards goal as in the image below. 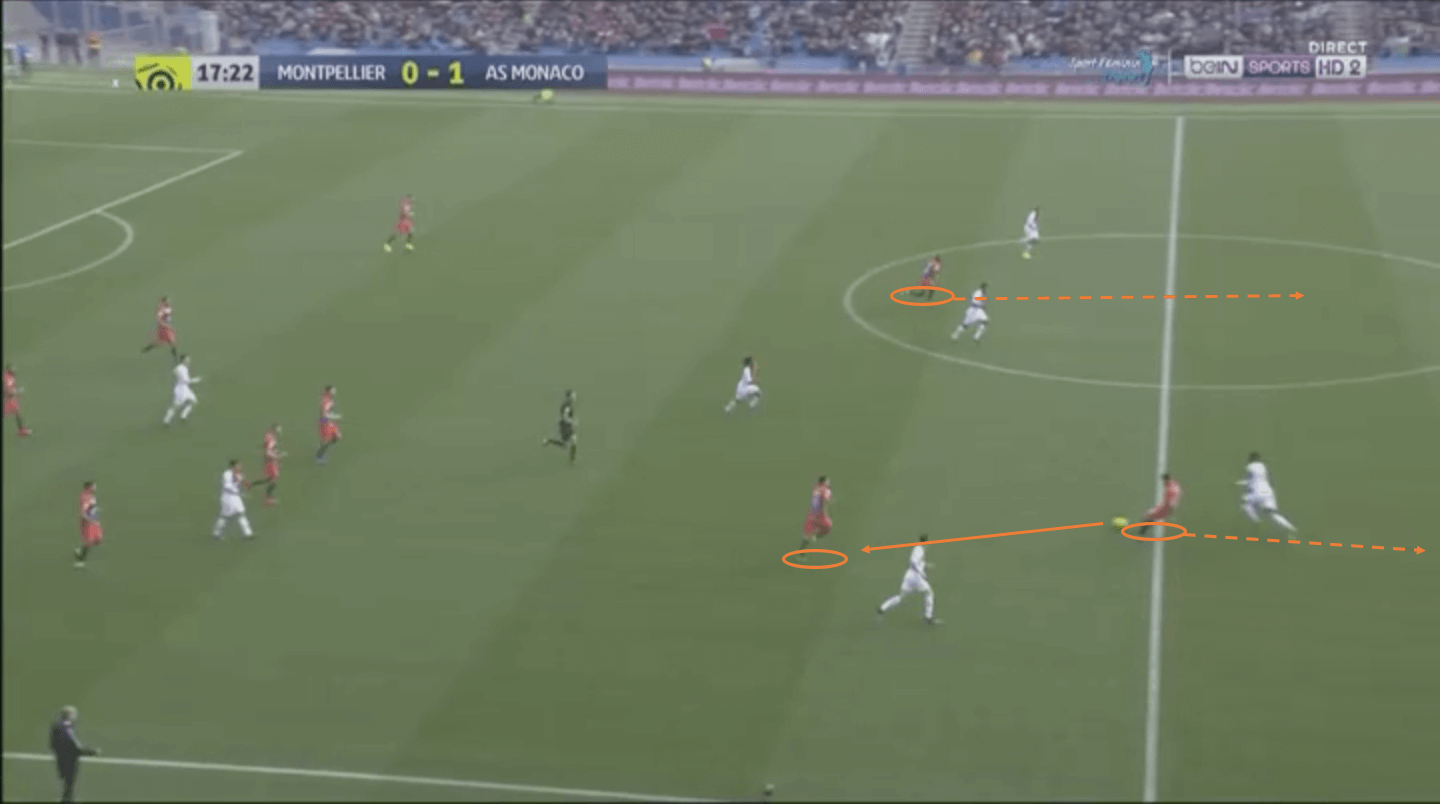 Montpellier were also well aware that it would be in their best interests to move the ball quickly and directly from goal-kicks. In the image below Mendes has received the ball from a goal-kick and quickly moves the ball to Aguilar. 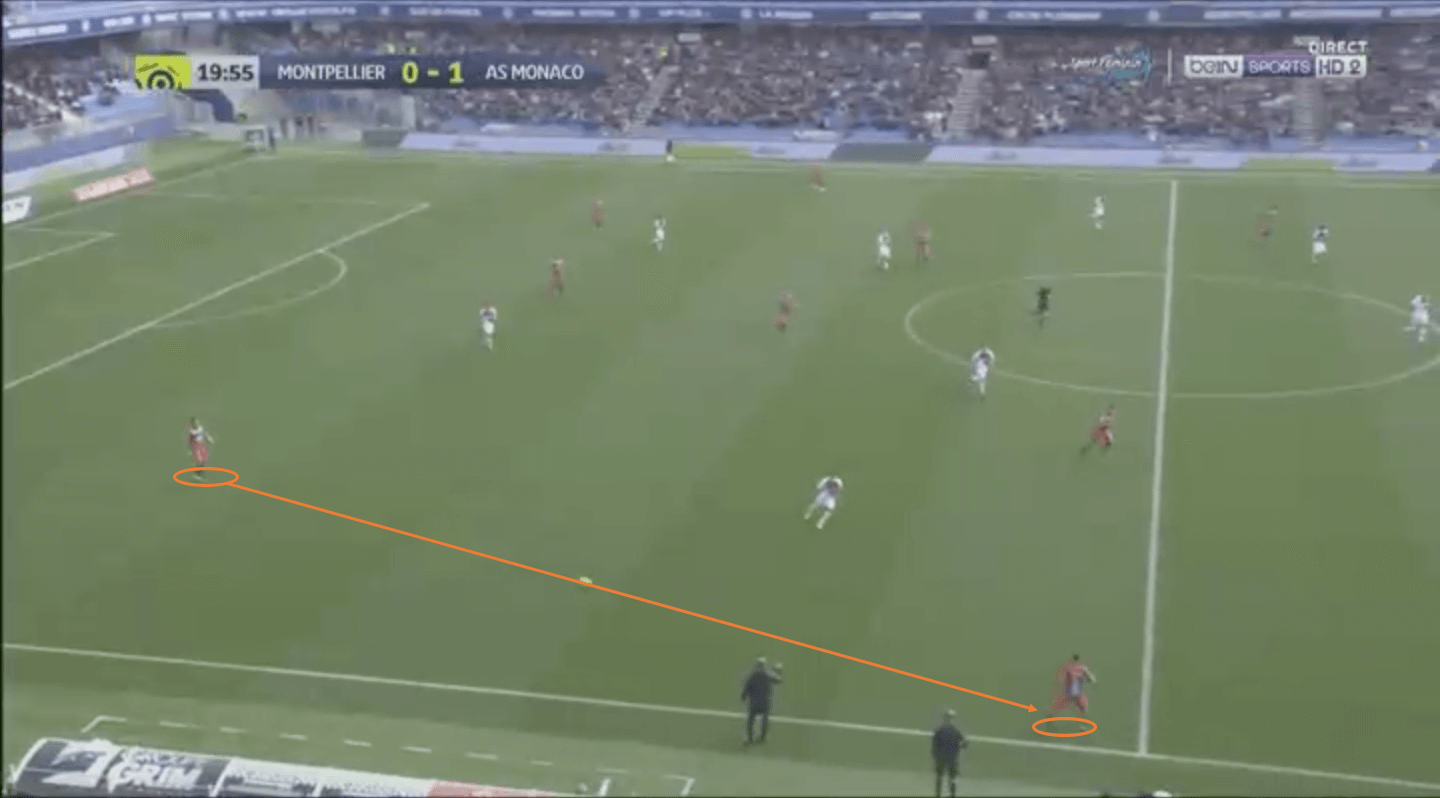 Aguilar turns and plays the ball down the line for Delort who wins a corner for his side. In three simple and measured passes down the right-hand side Montpellier managed to force a corner and a potentially dangerous attacking opportunity. 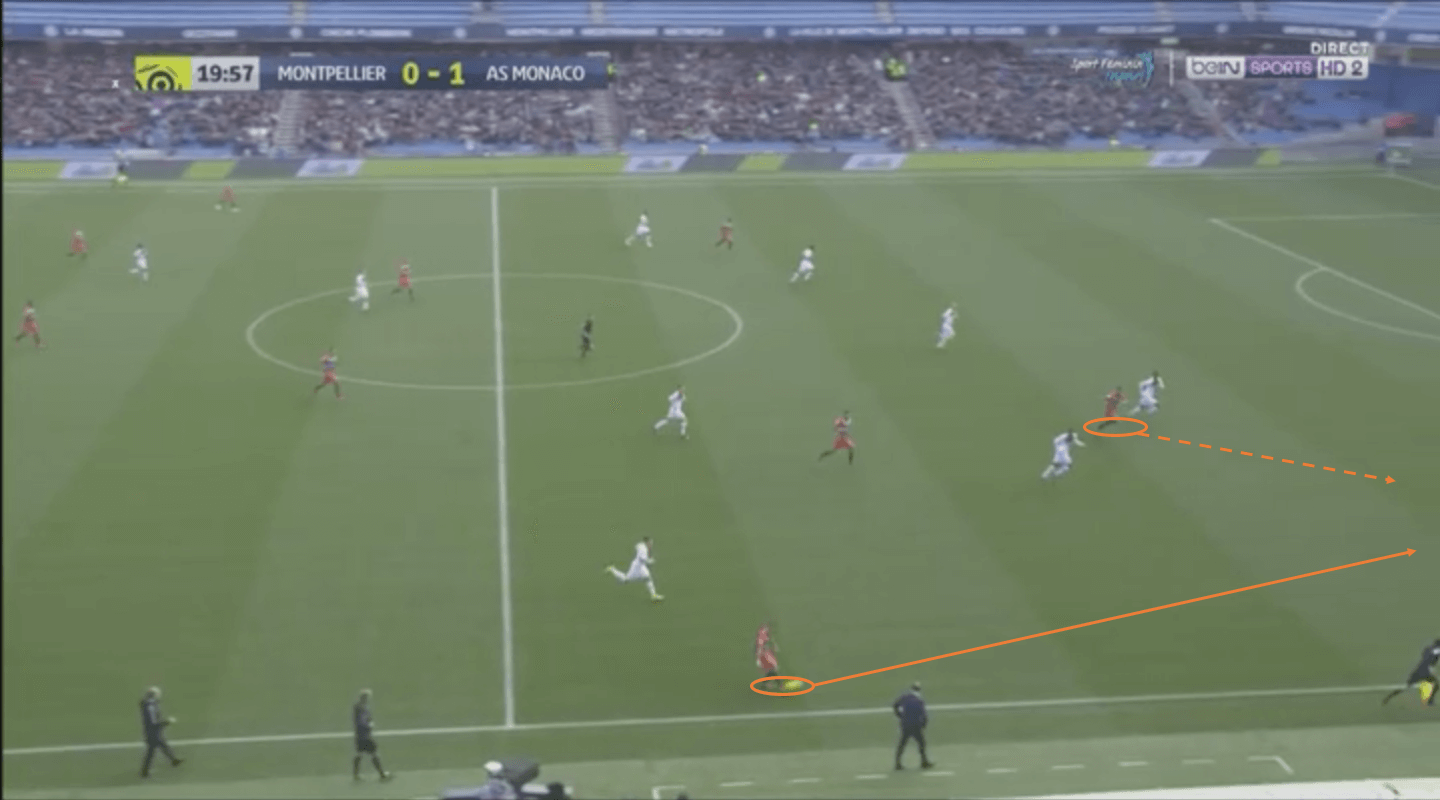 The intent with which Montpellier looked to move the ball forward was evident whenever Lecomte, the goalkeeper, had the ball. Every time the ball was turned over by Montpellier and Lecomte was in possession, he would sprint to the edge of his box and look for a long kick forward or a quick throw out.

In the example below, Lecomte aims a pinpoint throw down the centre of the pitch. By doing so, he eliminates seven Monaco players, leaving a potential 3v3 situation for his side. 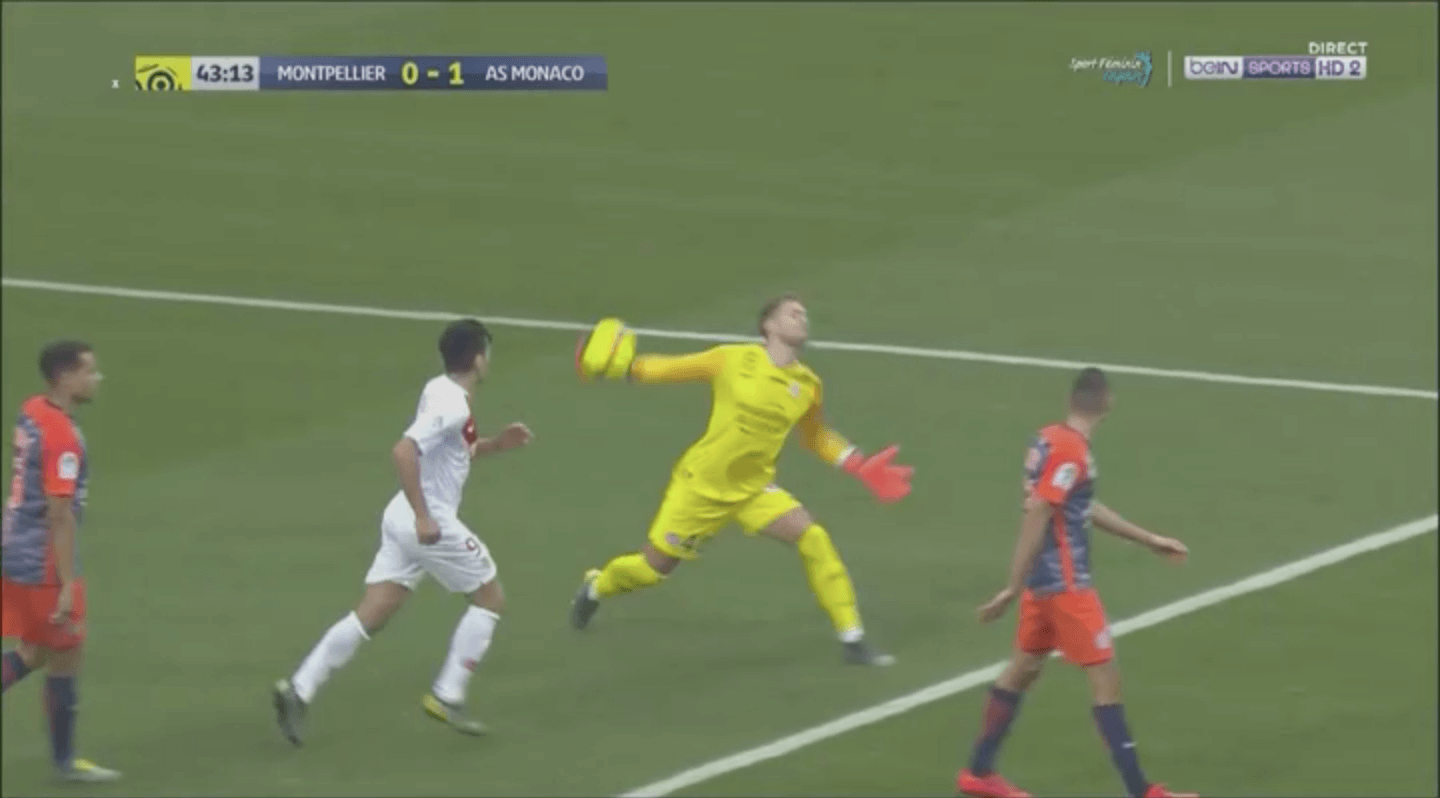 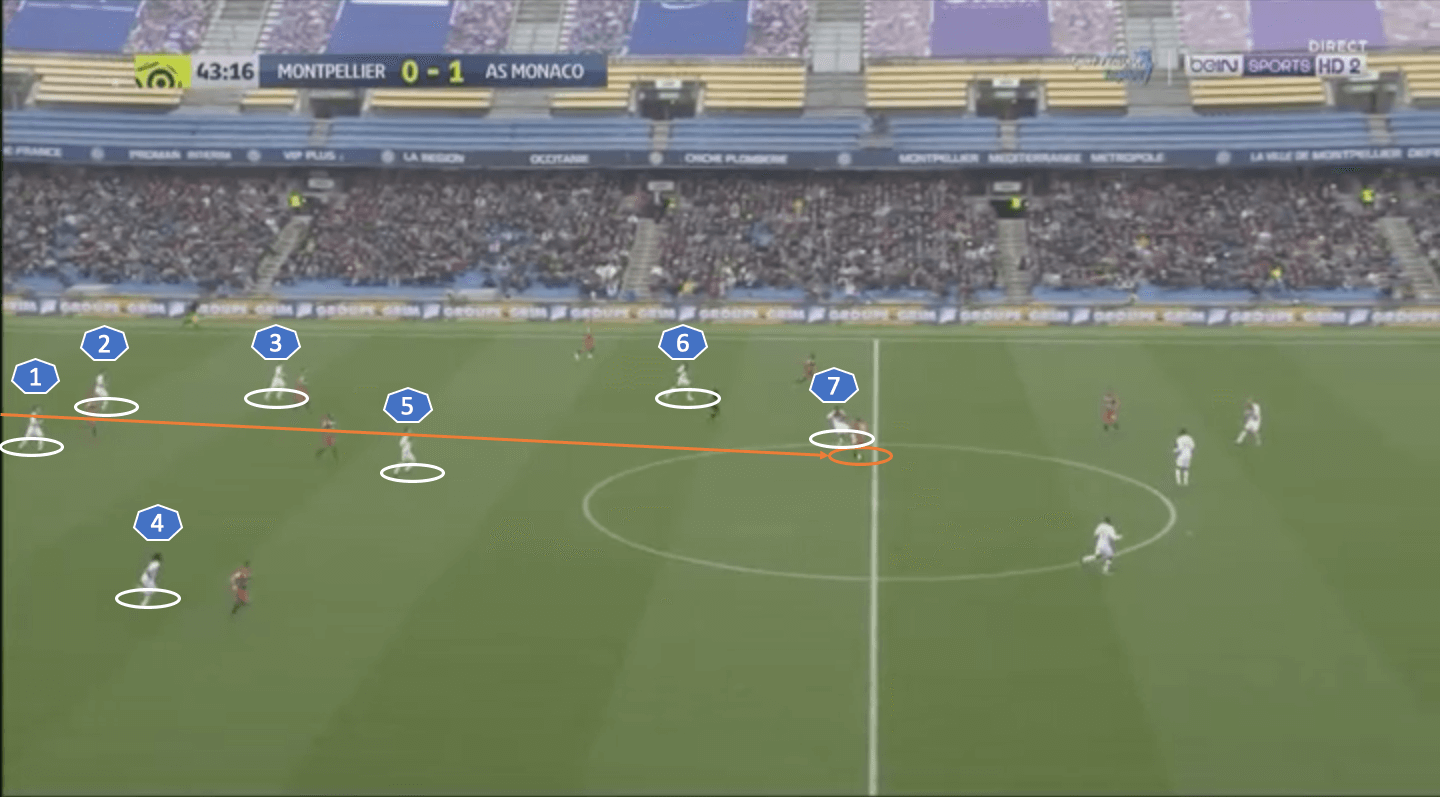 In the 58th minute Michel Der Zakarian decided that something needed to change as his side were still trailing 1-0. He made a double substitution withdrawing Sambia and Lasne for midfielder Ristić and forward Škuletić. In doing so Montpellier switched into something of a 4-4-2/4-3-3 with both Delort and Škuletić up front.

By moving into a back four rather than a back three, Montpellier were able to commit more numbers to their attack. In the first half, although Delort was often being found in dangerous areas with direct line-breaking passes, the Montpellier attack was well-marshalled by Monaco and the likes of Sambia were finding it particularly difficult to affect the game in a positive manner.

Škuletić is a much more physical forward and he could be used as the out-ball. Delort’s ability to pick up space around him or move into the channels and the combination play of these two forwards is what led to Montpellier’s equaliser. 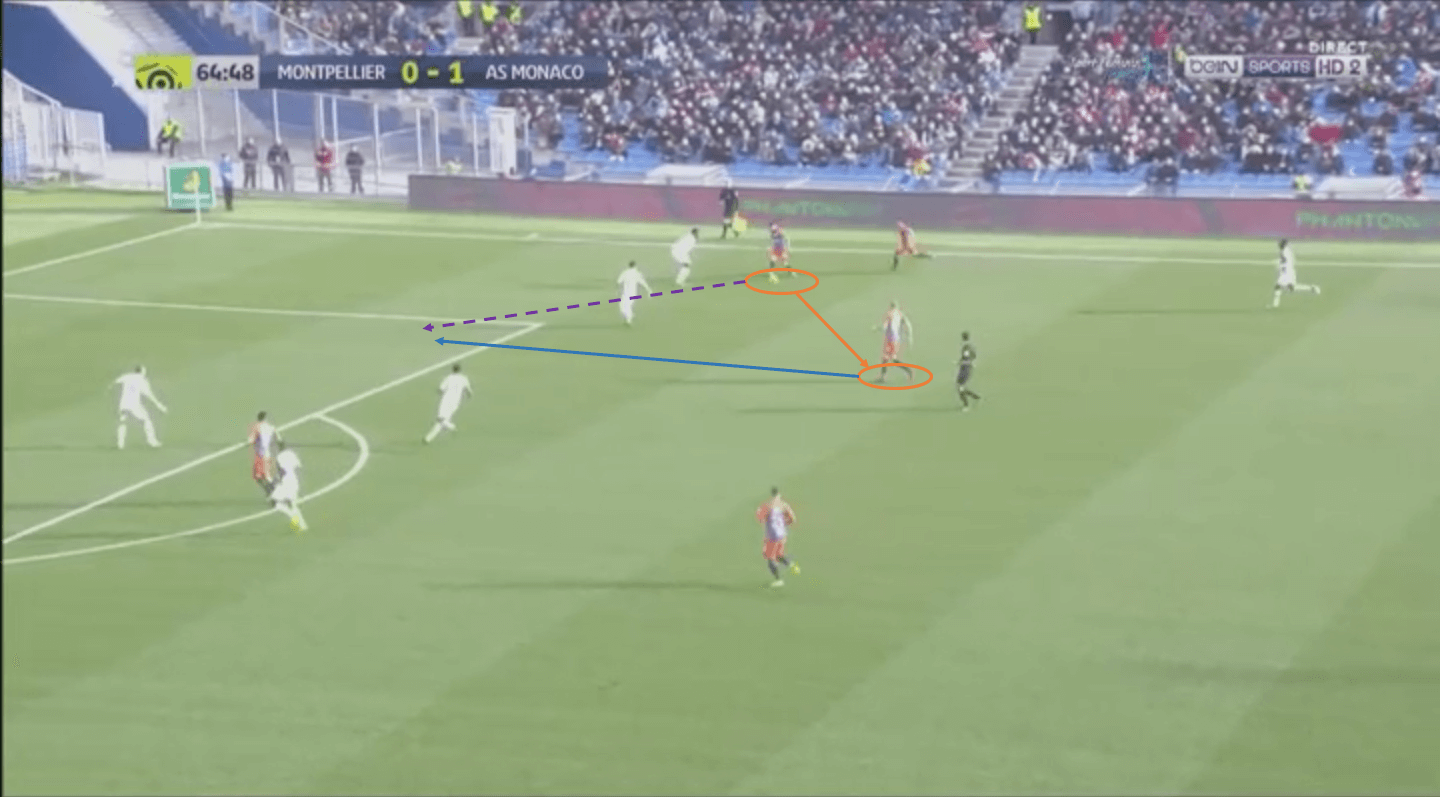 With Škuletić now operating as the more central striker Delort, who has the ball, has more freedom to move into different spaces. Operating from the wing he pops the ball into his strike partner. As the Monaco defence moves up to press Škuletić upon the forward receiving the ball,  Delort darts in behind and is picked out by a delicate chip from Škuletić. After a deflection the ball finds its way to Aguilar who crosses and the ball is finished by Laborde following a scramble in the box.

With the change in formation Montpellier were able to load the box with five attacking players against five defensive players. As a result they were more likely to benefit from a deflection or ricochet as they did for their goal. 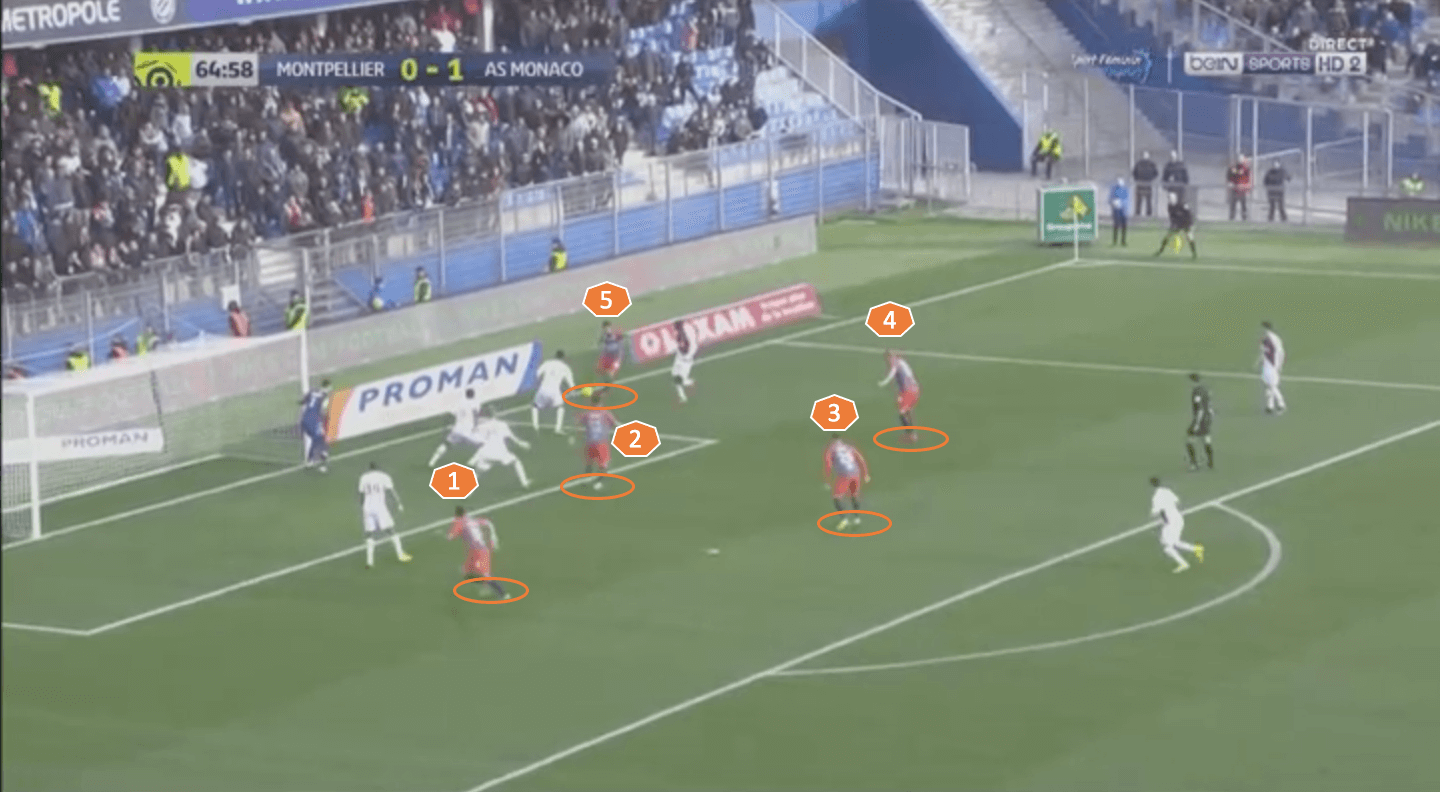 As the game went on Montpellier became more and more reliant on winning the second balls from knockdowns from Škuletić or Delort. Their play became a lot less controlled and slightly more route one. From one such route-one pass it was in fact Monaco who were able to secure the loose second ball and profit from it. 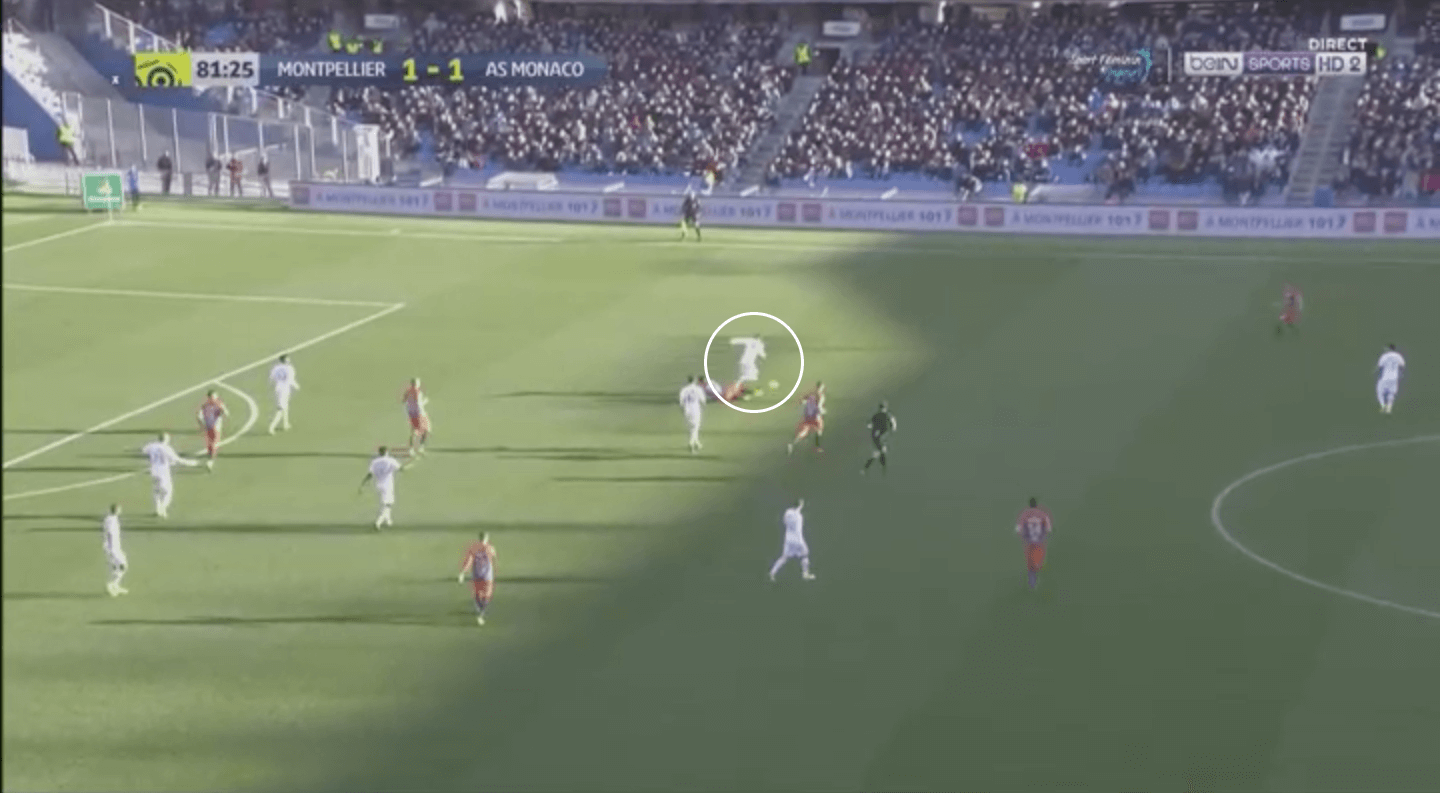 Ballo-Touré is the quickest to react to the loose ball and strides away from danger. Montpellier have committed so many men to a small area of the pitch as they looked to secure the knockdown from their forwards. Two Montpellier defenders are forced to pressurise Ballo-Touré before he can carry the ball any further.

Naïvely this left Montpellier 3v3 at the back. In the image below, Mendes (orange) makes a fatal error as he tries to read the pass and jump in front of Rony Lopes, who instead turns and runs into the space behind. From there Monaco are able to score with relatively little trouble. 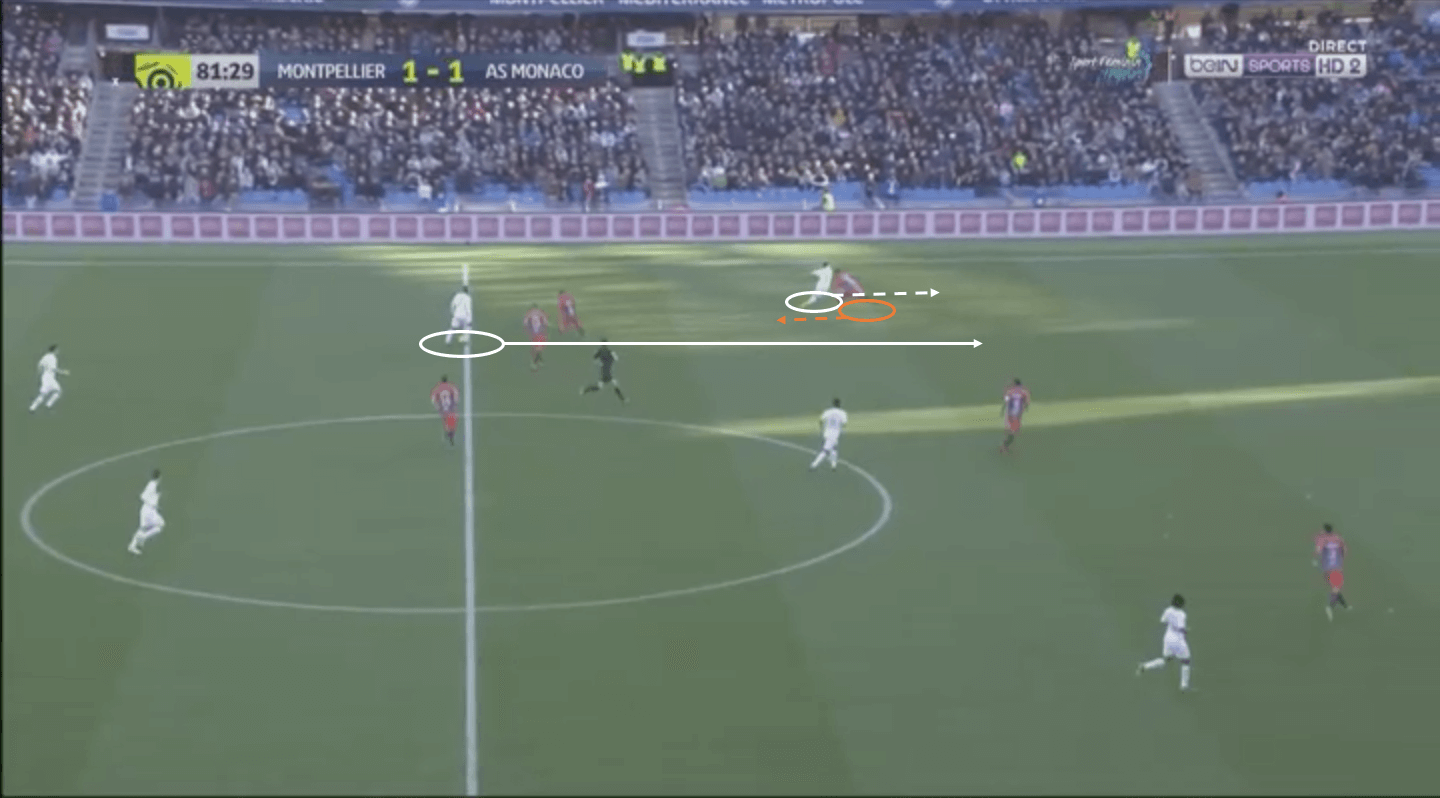 The numbers get the better of Glik

The scoring wasn’t over in this one however. With Montpellier searching for an equaliser they pushed bodies forward, which Monaco failed to deal with. Montpelllier worked themselves fairly easily into a situation where they had three attackers on the edge of the Monaco penalty area against three defenders.

There is a lack of pressure on the man with the ball looking to dink the ball into the penalty area. With men in front and behind him, Glik loses sight of Škuletić as the Serbian striker manages to sneak around the back of him. 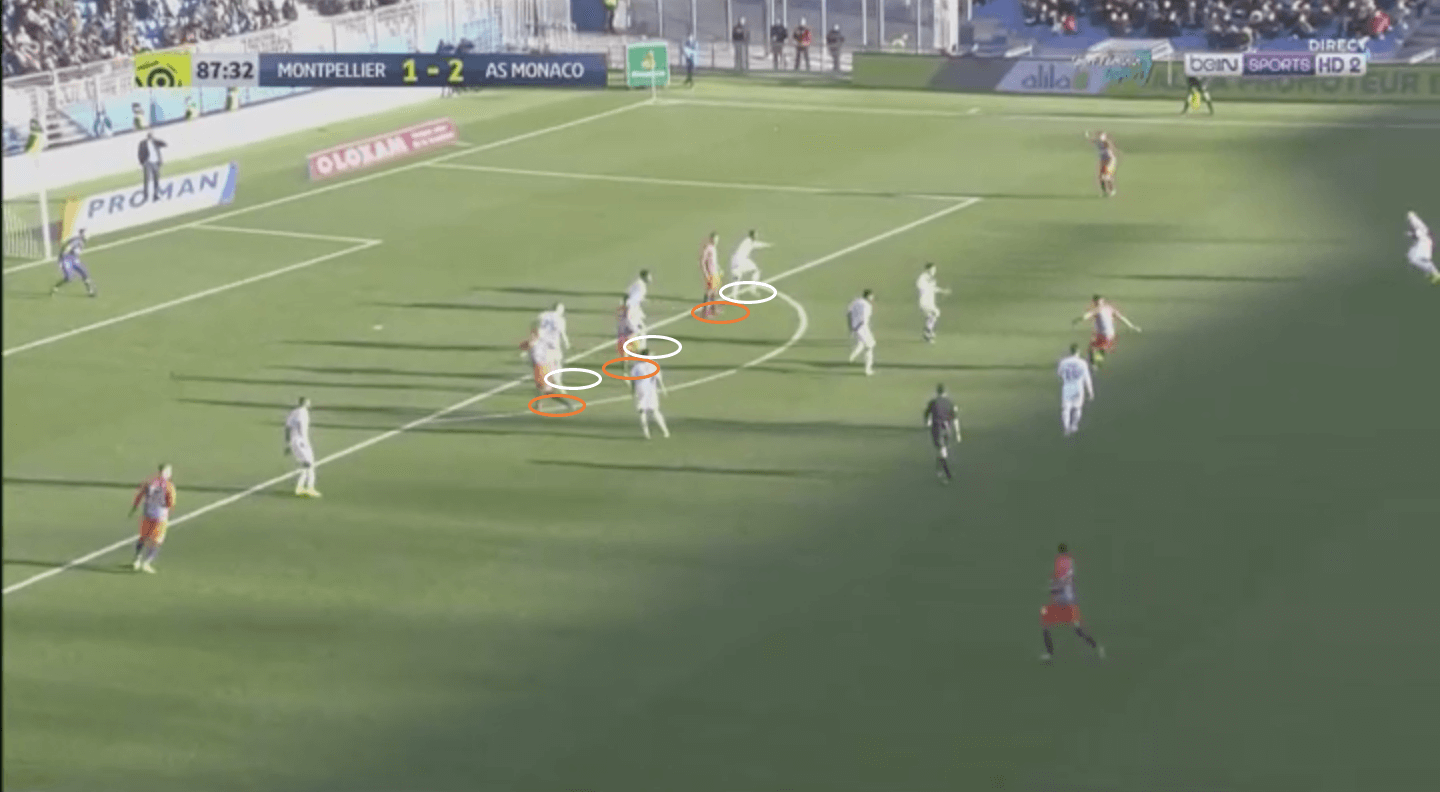 As the big forward tries to take the ball down he is unceremoniously kicked by Glik resulting in a late penalty for Montpellier which is dispatched by Andy Delort. 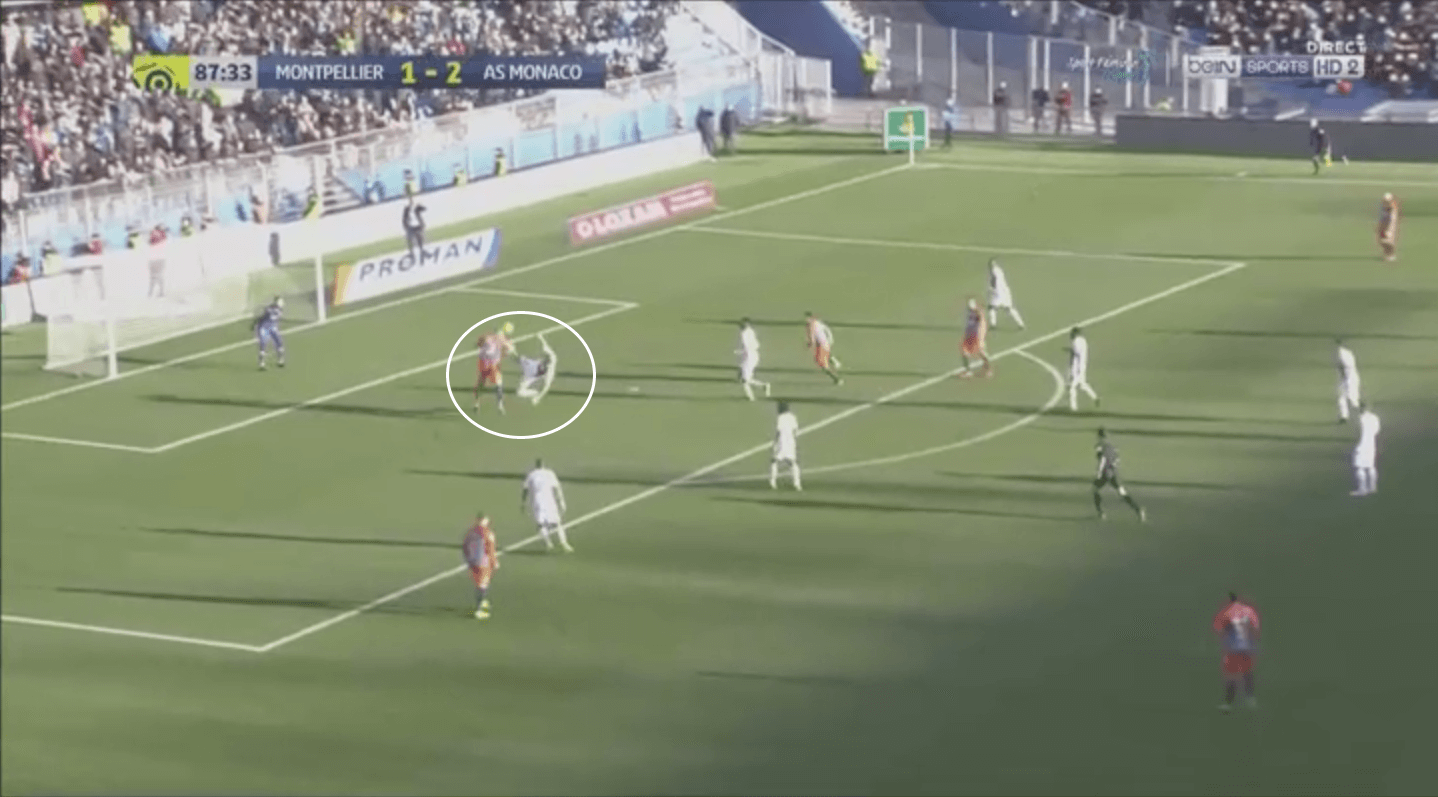 Montpellier play a very interesting style of football that, despite the result, caused Monaco a number of problems in this game. Monaco relied more on individual talent when trying to create chances in this one, whereas Montpellier seemed like the team with the more coherent and effective plan.

Under Jardim things have started to look a little more promising in the league. Monaco have scored four goals in their two league games under Jardim which works out at 17.4% of their season’s total in 180 minutes. This emphasises how poor they were under Thierry Henry. Monaco should be fine if they can keep up this goalscoring, but their defence still remains an issue.

Montpellier are a difficult team to beat and play against as evidenced by their exceptional defensive record so far this season. Champions League qualification is probably a step too far for them. However, if Lyon can progress further in this season’s competition, they may take their eye off the Ligue 1 ball and leave the back door open for the 2011/12 champions to make a return to the European elite.