Is Aleksandr Golovin “The Iniesta” of Ligue 1?

Receiving offers from big European clubs at a young age is a great recognition, especially when you’re from Russia and you get the opportunity to prove that your country can produce great talents too. This is the case of Aleksandr Golovin. Getting all the attention after an astonishing performance at the World Cup he caught the eye of clubs all over the top five European leagues. There were Chelsea, Arsenal, Juventus and Monaco who were pleased by his performance and wanted to sign him. It looked like The Blues were the favourite for his signature, but a late turnover got him wearing Monaco’s shirt.

That’s how his Ligue 1 career started. And it has been pretty impressive so far. The 22-year-old is getting the most out of his transfer move, although his team is experiencing some turbulence.

Is he the new Ligue 1 diamond or Monacо‘s performance is about to push him in the dust and stop his shining light? 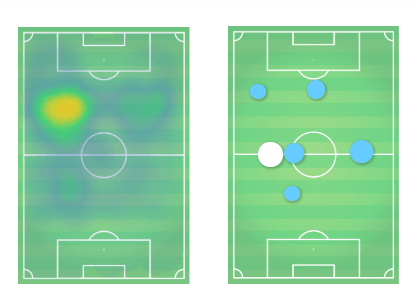 Golovin is a complex player with a mix of great skills that get him under the spotlight in every game. Despite his midfield role, his attacking abilities are outrageous and his creativity is hard to be tamed by any Ligue 1 team. The 22-year-old is great at dribbling and passing and often leaves the defenders with mouths wide open, unable to stop him. His set-piece skills are causing trouble to every team he conquers as he is always ready to assist or score on his own.

The Russian likes to play short passes, but his best quality is his positioning and the way he runs the ball thanks to his technique and pace as he manages to do 2.8 progressive runs per 90 minutes. It is known that his style of play is influenced by his favourite player Andres Iniesta, and it could be noticed in his rapid shift of the ball from left to right foot or vice versa.

Golovin’s game is mainly characterized with creating opportunities by through balls, to be exact he averages 1.22 per game. His understanding of the game and creativity allow him to make a lot of smart passes too and deliver a great support to the front lines. Thanks to his speed he is able to free himself of his markers and create some masterpieces in the final third. 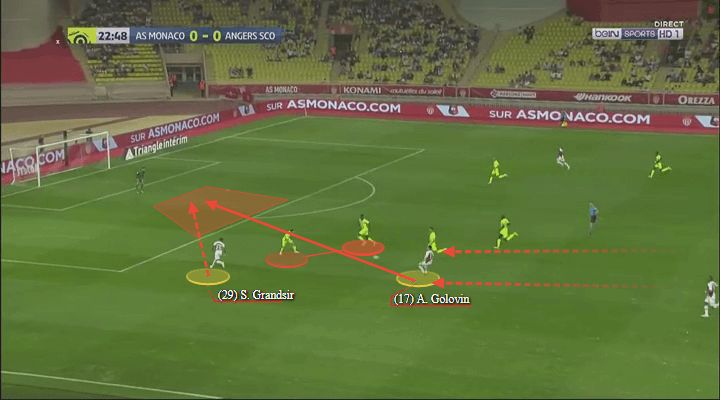 Golovin demonstrates his strong decision making and a great understanding of the game. He relised that he won’t be able to dribble past his opponents and decided to go for a through pass to the box as he saw Grandsir uncovered and able to reach the ball and eventually shoot. 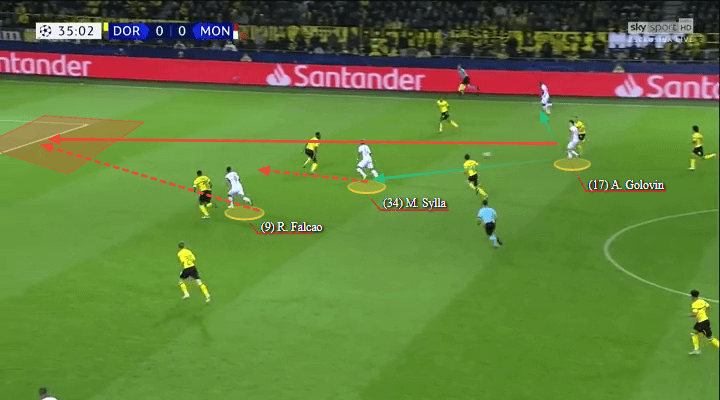 He made through passes on a few occasions against Borussia Dortmund in the Champions League. In here he had two options or a short pass but he looked for an off-beat move and made saw an opportunity in a through pass to the edge of the box where Falcao was running to. 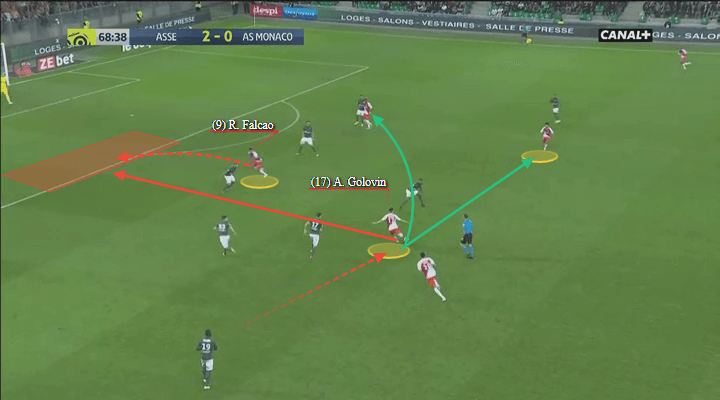 He is often using his body language to confuse his markers. He received the ball faced to one side of the pitch and his markers thought he would go for a pass in that direction, but he had already noticed that Falcao is in a great position to go deep in the box and made an amazing through pass to his left which left the defenders totally unprepared. 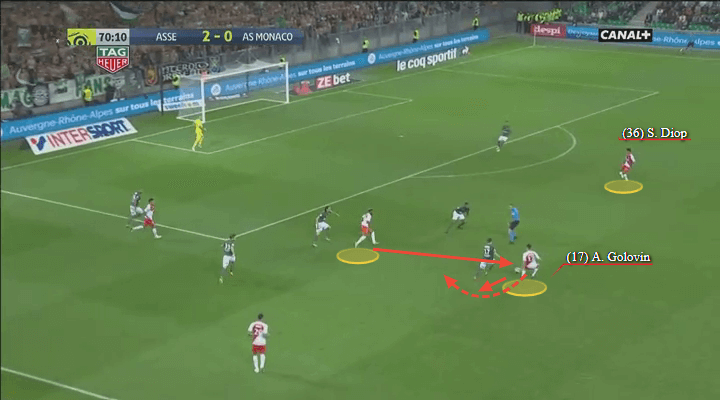 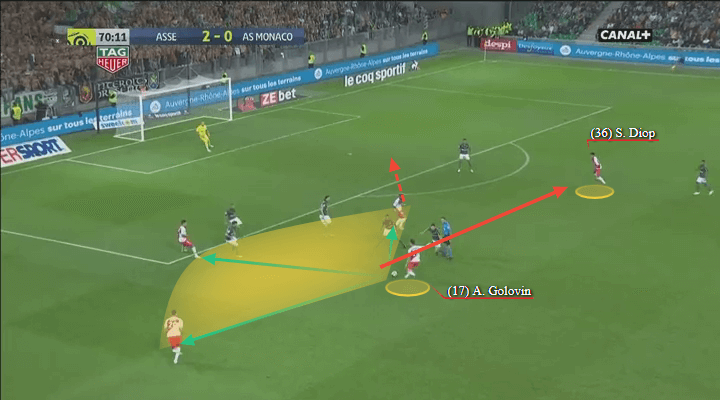 In this situation, he used his Iniesta like technique to change the direction of the ball. He made a shift from his right to his left foot and kept the possession of the ball. Then he was expected to make a pass on his left as this was his visible area. But he then used his creativity to make a parallel pass to Diop who was ready to make a run to the box.

He tries to dribble in the midfield so he can open spaces and help the forward lines. He averages 4.58 successful dribbles per 90 minutes in Ligue 1 and Champions League combined, according to Wyscout. Through a mix of dribbles and progressive passes, he manages to consistently break through the opposition’s lines. He also won more than half of his offensive duels this term. 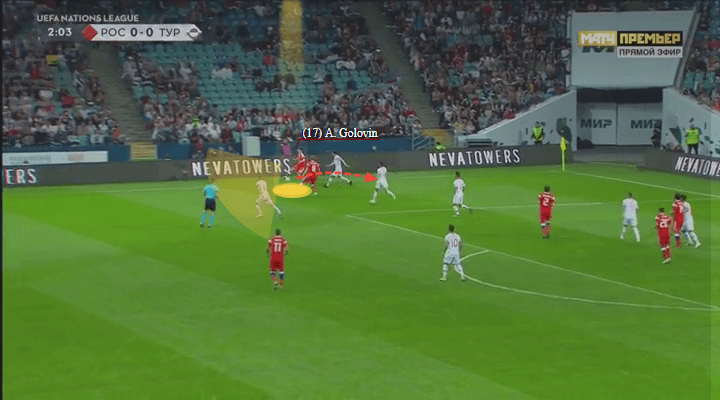 Aleksandr used his body language to fool the others on international duty too. In here he received the ball on the touchline and was pressured by his opponent. He was faced towards Russia’s half of the pitch but then made a turnover and dribbled past his marker to go deeper on the wing. 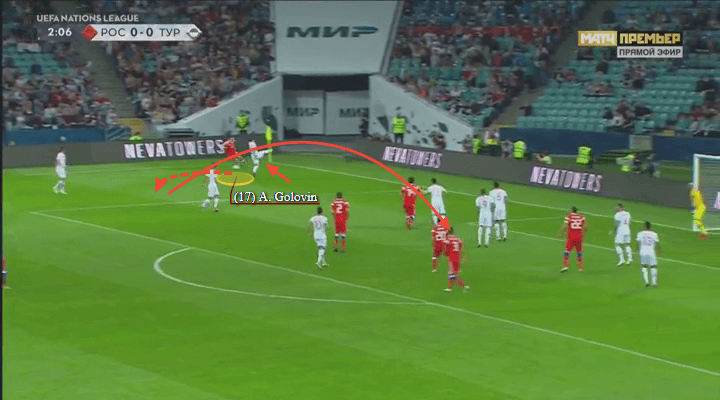 He then continued with showing off his dribbling skills making his marker think he would make a cross with his left foot, but then made another shift from left to right, freed himself and made a cross. 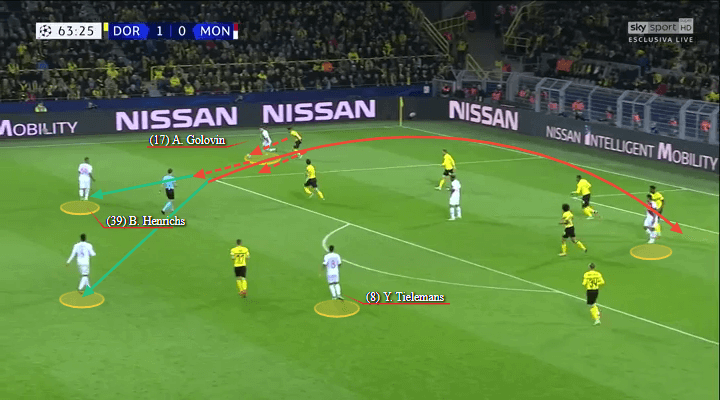 Instead of making a short pass to Henrichs after dribbling past his opponent he sent the ball deep in the box and created a great opportunity. The Russian once again fooled the defence by his body position. It looks like he has eyes on the back of his head. With such moves, he helps in the build-up and delivers to the attacking line on every possible occasion.

The youngster averages 81,2% pass accuracy per 90 mins and also manages to send 3.51 long balls per game. He is always seeking off-beat moves and his strong decision-making often gets him prepared for a long-range pass so he can escape the pressure of his markers. 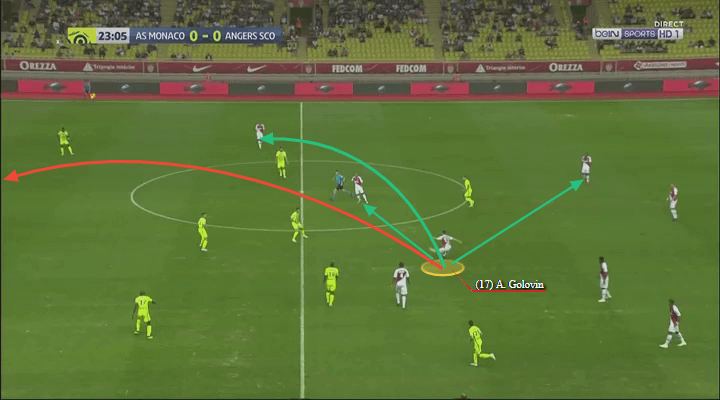 Golovin had a few options for a pass but he decided to make the offensive transition easier and pass the box directly to the edge of the box. 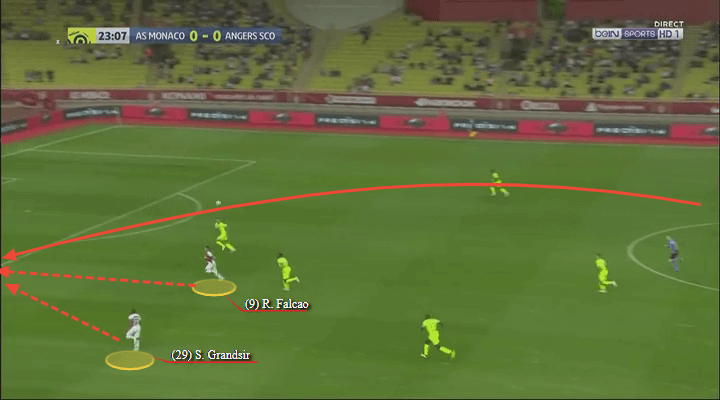 In the split second he was receiving the ball he noticed that Falcao and Grandsir are not completely covered in the final third and might be able to receive the ball so didn’t hesitate to send a long ball to them. 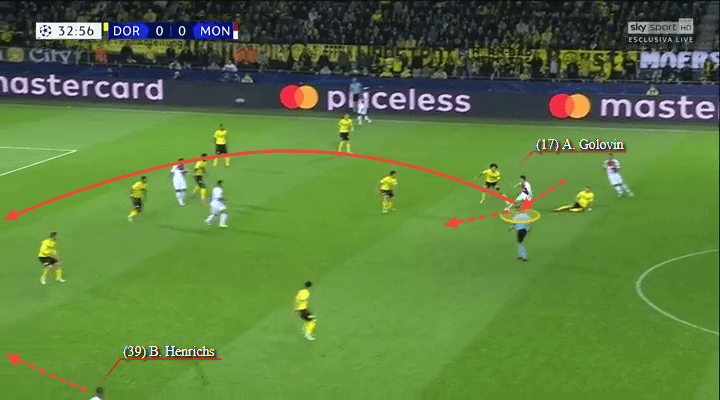 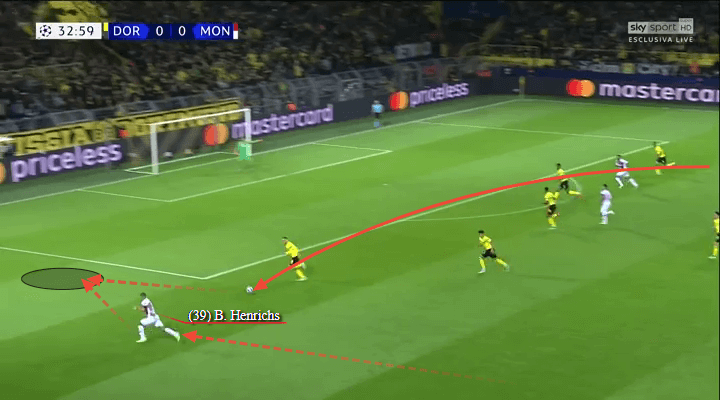 He acts strongly under pressure. The youngster had no options for a short pass and saw Henrichs completely uncovered on the left. So his decision was to do a long-range pass to the edge of the box where Henrichs could use his skills and make a cross.

Able to operate across the midfield, he finds the balance between tireless pressing and defensive work. His back pass accuracy percentage is 91,5% and he does 4.12 interceptions per 90. 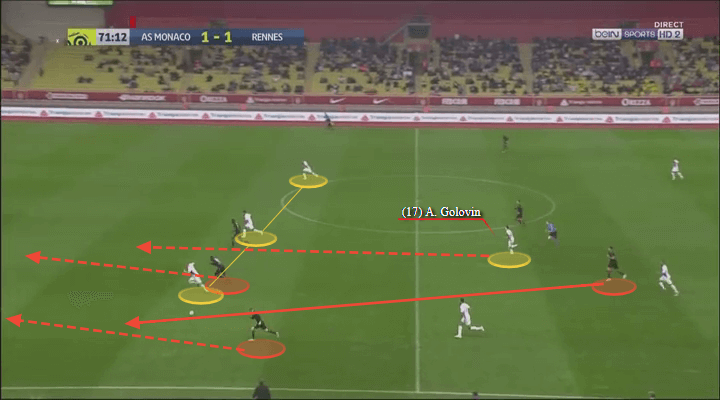 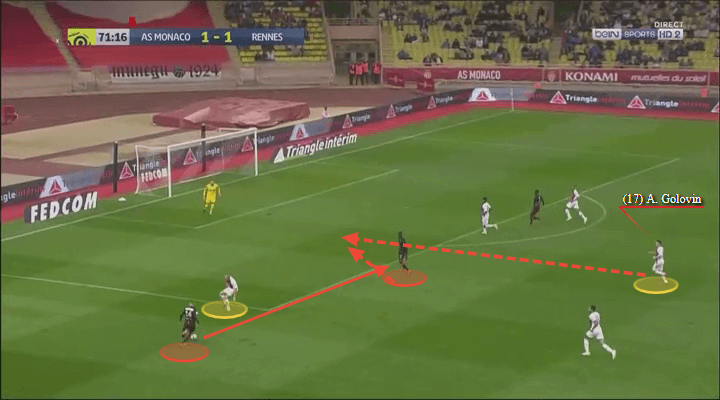 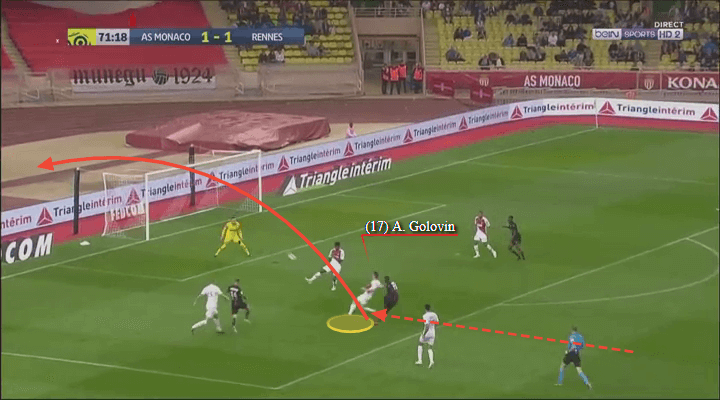 He had to make a speed run to Monaco’s half as the team lost the possession. Despite the three of his teammates that positioned themselves defensively, he was the one who reached the box to put pressure on the striker so he could miss the target.

His main weakness is the aerial duels. His height of 180 cm is not helping him with that. He manages to win only 38,6% of his aerial duels per game which is actually 1.58 duels won. He is not diving into tackles too as this is not among his best abilities.

Aleksandr Golovin can be useful as a conventional central midfielder, number 10 or on either flank as he is doing equally well wherever he plays. Being able to drift into half spaces on the wings while starting in the centre is one of his specialities. He supplies passes behind the defence but also contributes defensively with breaking up opposing attacks. He covers a lot of ground and is a great playmaker which makes him the embodiment of the perfect midfielder. The question now is if Monaco was the best choice for his future and is he going to get the team out of the mud or he’s going to sink with it.