It was the game of the weekend in the Superliga in Argentina. Racing Club, the leaders playing beautiful collective football, took on River Plate, the recent Copa Libertadores champions that have inconsistent domestically. River’s case is a curious one. On form, they are almost unbeatable in South America, but sometimes they inexplicably lose against teams they should beat comfortably.

Despite having won the Copa Libertadores against Boca Juniors, less than two weeks later they couldn’t beat Al Ain in the semi-final of FIFA Club World Cup. Even though River didn’t play the most beautiful football, in this tactical analysis we will show how they were tactically very smart to break Racing’s collective game and beat the league leaders 2-0.

Both teams started the game with a nominal 4-4-2, that gave place to several tactical modifications during the first half. Racing have been the highlight of this season in the domestic league, with a beautiful collective football, patiently building-up and moving as a whole block as the team progresses with short passes. Key to this style have been defensive midfielders Marcelo Diaz and Nery Dominguez, who dictate the rhythm of the game for Racing. 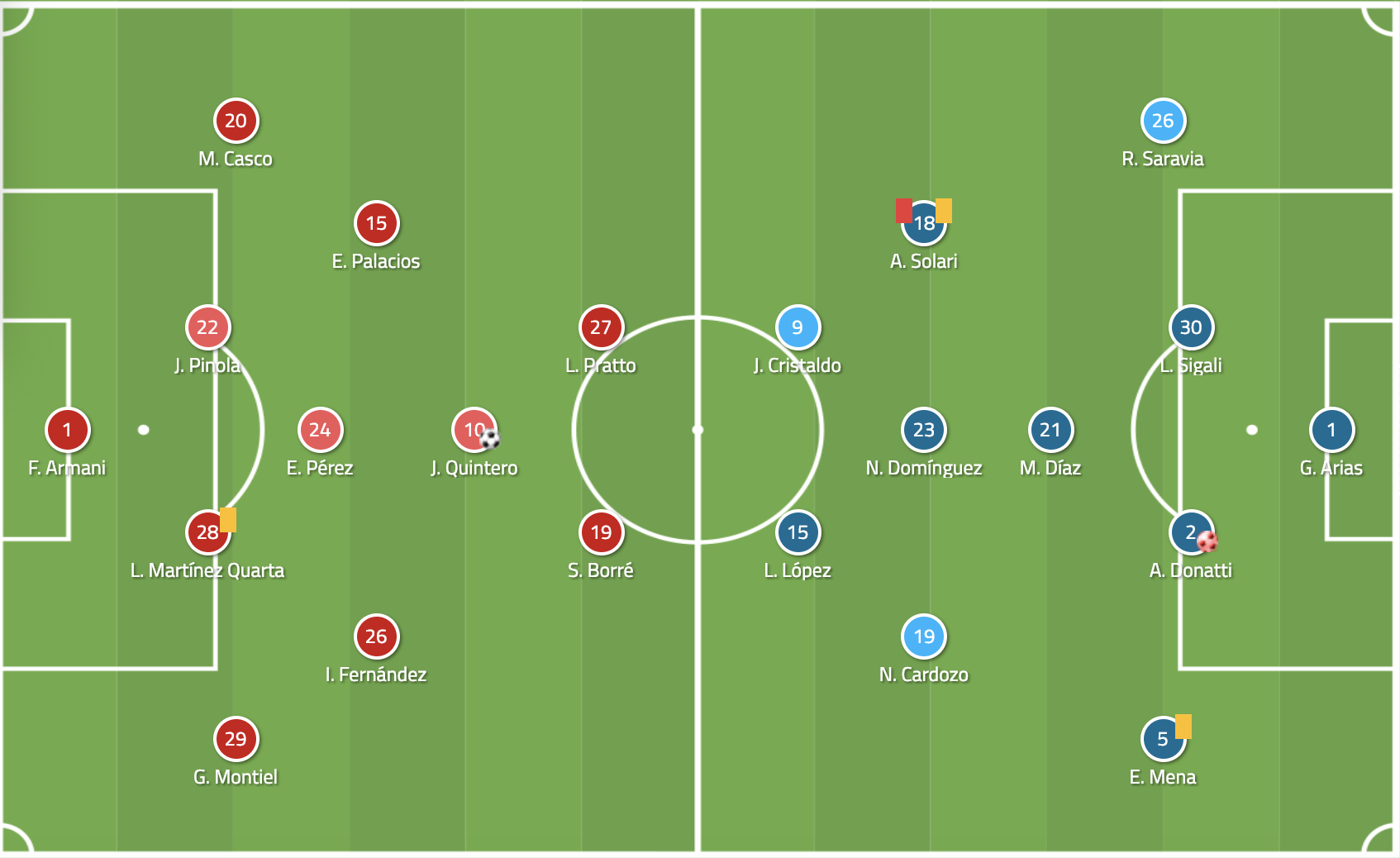 River’s first objective of the game was to break that circuit at Racing’s core to stop them from progressing, isolating Lisandro Lopez and Cristaldo from the rest of the team. This confused Racing and saw Marcelo Diaz shift to become a third centre-back, a position he doesn’t handles well. He is good at managing distances and the rhythm of the game, but he is neither good at one-on-one situations, nor fast enough to provide coverage to his teammates.

The other two centre-backs took care of Pratto and Santos-Borre. A couple of passes in between the lines by Juanfer Quintero, although catching River’s forwards offside, were signals that Racing’s defensive positioning was not working well. 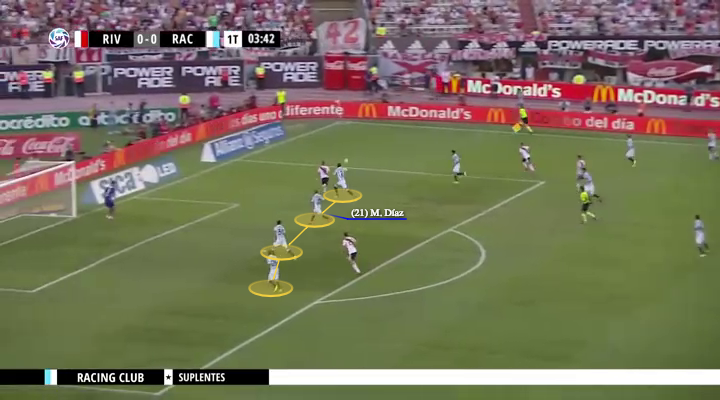 Having Diaz closer to the defensive line also meant that he was disconnected from the build-up phase of the team, and Racing could not connect to create offensive chances. This resulted in Racing playing long, as they were unable to progress through the middle.

The consequence was Racing’s defenders constantly trying long passes to get the ball forward to Lopez and Cristaldo, making an easy job for River’s defence. Racing lines were broken, and the team was too stretched. 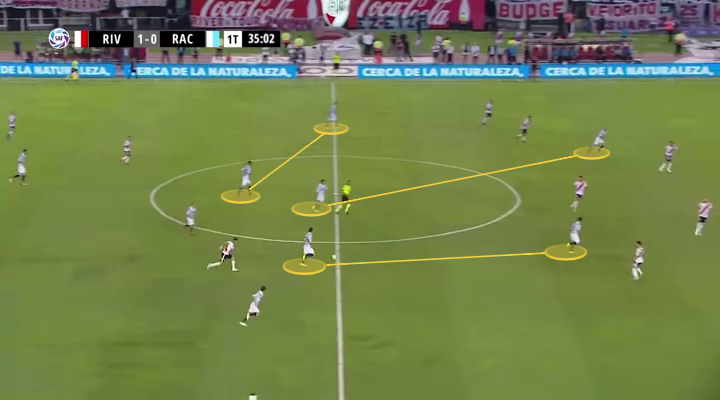 Lisandro Lopez had to move back or wide to try to connect with the game, but then the attacking weight of the team was no contest for River. Racing lost their main offensive weapon with Lopez from the penalty area. Eventually, Diaz returned to his natural position and Racing came back to their classic 4-4-2, but things didn’t improve much. 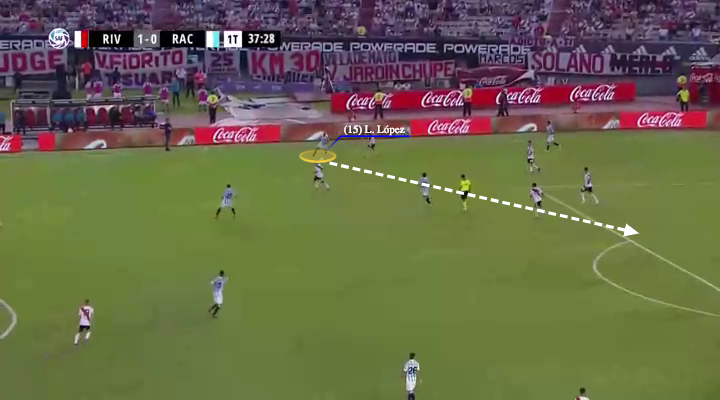 On the other side, River’s strategy to break Racing’s circuit worked very well. More than building up and progressing with the ball, their strategy was to increase the physical intensity in the middle when the ball was lost, thus stopping Racing’s progress. When the ball was recovered, they also found their rivals defensively disorganised and were able to quickly threaten their goal.

Quintero playing through-balls to Santos-Borre was the main weapon, but Pratto also had a very important role out of the spotlight. Playing slightly further from goal than he usually does, he did a great job at receiving nearer his own area and spreading the ball wide to Fernandez and Palacios, back to Quintero or on to Santos-Borre. It was not beautiful football, but it was very efficient. 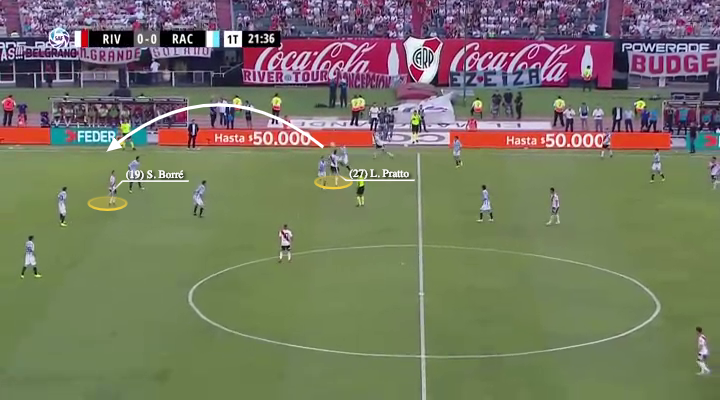 Without many clear chances, the opening goal came from a different route. A lovely free-kick by Juanfer Quintero that everyone thought would be a cross into the area was placed in the top-left corner, impossible to catch for Arias.

Five minutes for River to seal the game

Racing coach Eduardo Coudet tried to shake the dressing room during the halftime break by introducing two substitutions. But it took River five minutes to score after a long-ball from Armani, headed by Pratto and finished by Casco. If anyone thought the second goal would put a pause on River’s intense pressure, they were wrong.

Although they did regulate when to start pressing, River were very smart at it, knowing exactly when and who to press. As the physical endurance started to fade, the game became more open and more spaces arose. In that sense, Racing started circulating the ball in the middle and progressing through simple passes and quick movements to lose their markers.

River knew their physical capacity would not allow them to constantly press Racing, so unless they had numerical superiority high in the field, they would move back, and wait for Racing closer to the middle of the pitch. 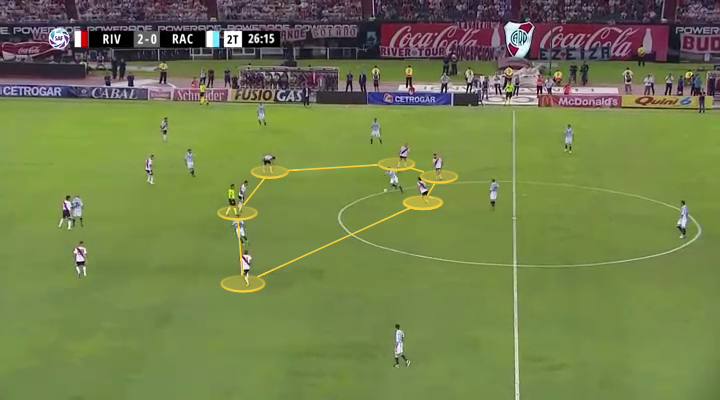 They instructed both forwards, Pratto and Santos-Borre, to block the passing lanes to the wing-backs. Although they didn’t need to be wide, they were strategically positioned to force both wing-backs to move back to be able to receive the ball. They would then have the four midfielders plus the two forwards if needed to press in the middle, as the second avenue to open the game wide was through Marcelo Diaz. 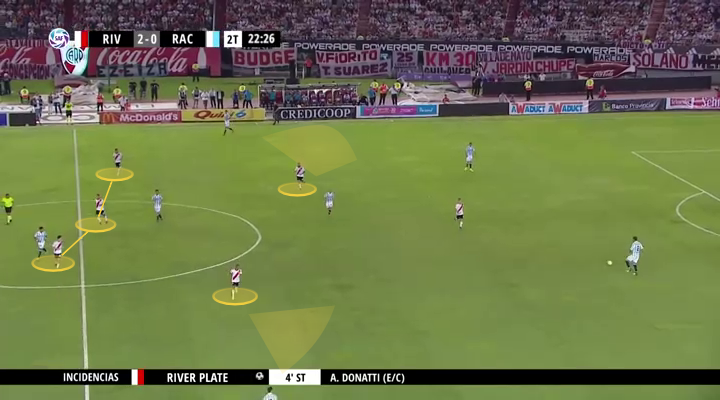 Again, Racing were unable to play the way they feel comfortable. Although they had more spaces, the team performance was far from acceptable. While trying to improve, Racing left plenty of space at the back, and River had more clear chances to score the third goal than Racing did to score their first.

River’s counter-attacks were always dangerous, reaching Racing’s goal area with two or three touches. If it hadn’t been for the inefficiency of River’s attack, especially Santos-Borre who had at least three or four clear chances, River could have had a more comfortable win. 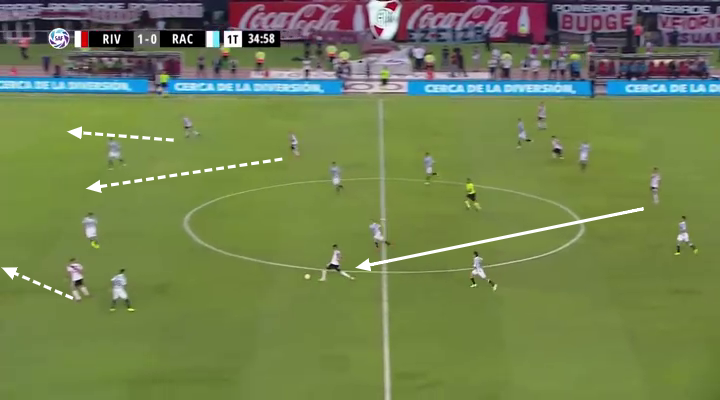 Closer to the end Solari was correctly sent off and that put an end to a game that may not have been the most attractive for River’s fans, but tactically was one of the most compelling of late from Gallardo. The way they pressed, the way they counter-attacked, and the movements they deployed after recovering the ball were smart and well-executed. The big winner of this result, apart from River, is Defensa y Justicia. They beat Argentinos Juniors in the last minute of added time and caught up with Racing at the top of the table.