Following the soap opera that was the Copa Libertadores final against Boca Juniors, a mini tour of the United Arab Emirates to play in the Club World Championships and a prolonged winter break, Primera División action returned to El Monumental. Underperforming River Plate took on high-flying and as yet unbeaten Defensa y Justicia. In our tactical analysis we will look at how both River Plate and Defensa y Justicia set up in this Superliga Argentina clash and ultimately how the away side came out on top.

River Plate operated in a 4-3-1-2/4-3-2-1 both in and out of possession. When they had the ball the Colombian Juan Fernando Quintero and target man Lucas Pratto were tasked with occupying the attacking half-spaces. When River had the ball they would look for Quintero with direct passes to feet. The intention was to allow the diminutive attacking midfielder to turn and use his exceptional ball control and vision to find teammates in advanced areas.

By contrast, given his physique and strength, Pratto was used as a withdrawn target man whom River could hit with slightly longer passes. Pratto would then take the ball down and bring his teammates into play. Rafael Santos Borré was usually the man leading the line and most of River Plate’s best chances fell to the Colombian striker. However, both he and Pratto were pretty flexible in their movement. Sometimes they operated as a front two with Quintero operating in the right half-space behind them.

River often looked to create scenarios where they could have all three of their central attacking players up against three or four Defensa defenders. They did this by playing vertical passes that broke the lines into the feet of one of the three. Unfortunately for the Copa Libertadores champions, this was something that happened far too infrequently. Much of the game passed Pratto and Quintero by in particular.

The width for River Plate was provided by their wing-backs, Gonzalo Montiel and Milton Casco. The two players played extraordinarily high up the pitch when River were progressing the ball forward, and were the only outlet for River in the wide areas of the field.

In order for the wing-backs to push so far up the field, the two wider central midfielders, Exequiel Palacios and Ignacio Fernández, would rotate into the full-back positions when the central defenders had the ball. This movement created space for the wing-backs in the wide areas. The movement of the midfielders away from the centre of the pitch opened up space for Quintero and Pratto to drop into.

Without the ball River Plate covered the middle of the pitch. Pratto and Quintero stayed very narrow and prevented Defensa from building through the middle. From goal kicks River were happy for Defensa to play the ball short into the right centre-back area. They only began to press when the opposition player who received the ball began to dribble forward.

In terms of their overall pressing game, River tried to harry and hassle Defensa in central areas. However, Defensa were more than happy to play direct and River Plate’s pressing never really caused them too many issues. Below are some images highlighting was has been discussed above. 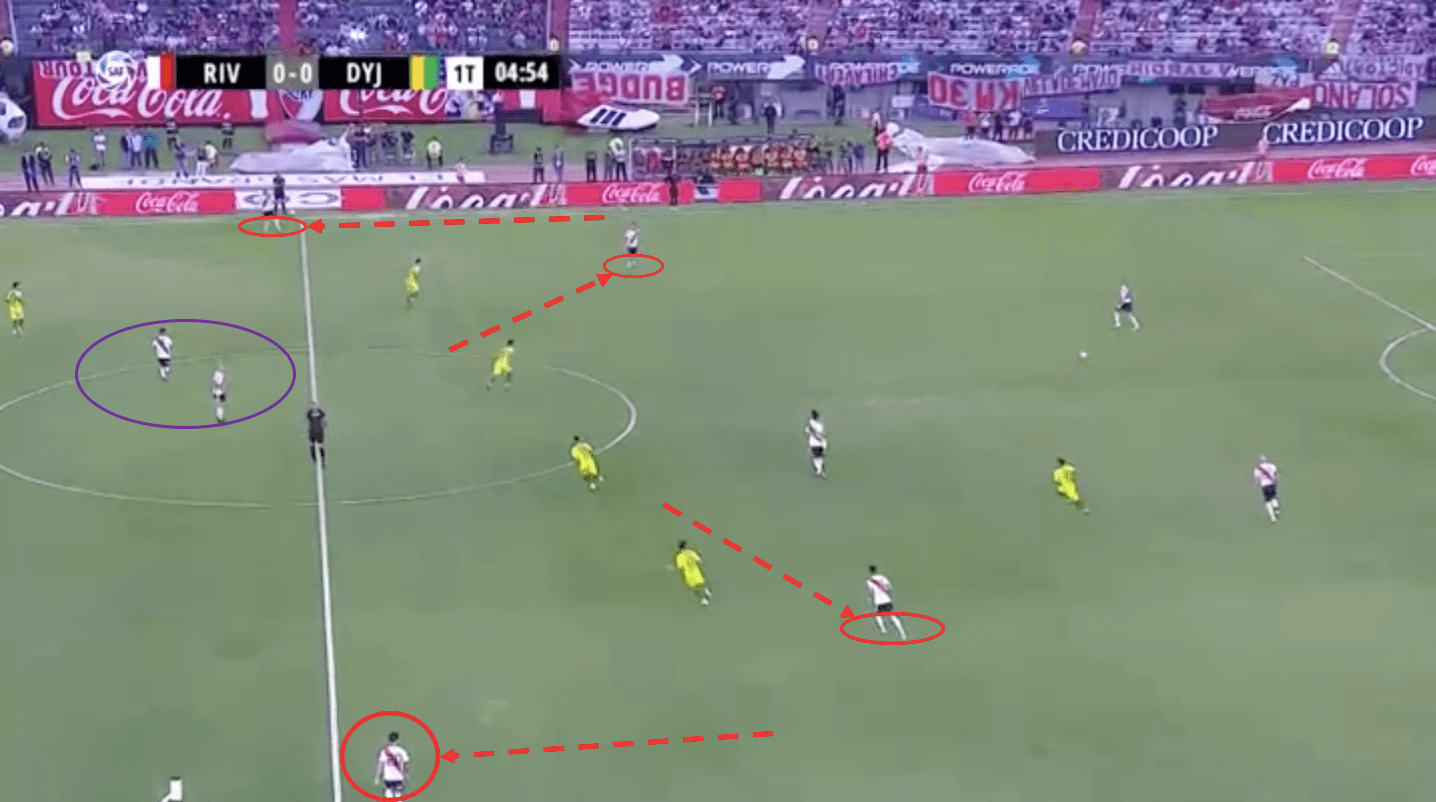 In red (above) you can see the movement of the River midfielders and wing-backs. The wing-backs have pushed high as the midfielders drop into the full back areas. Quintero and Pratto are in space (purple circle). 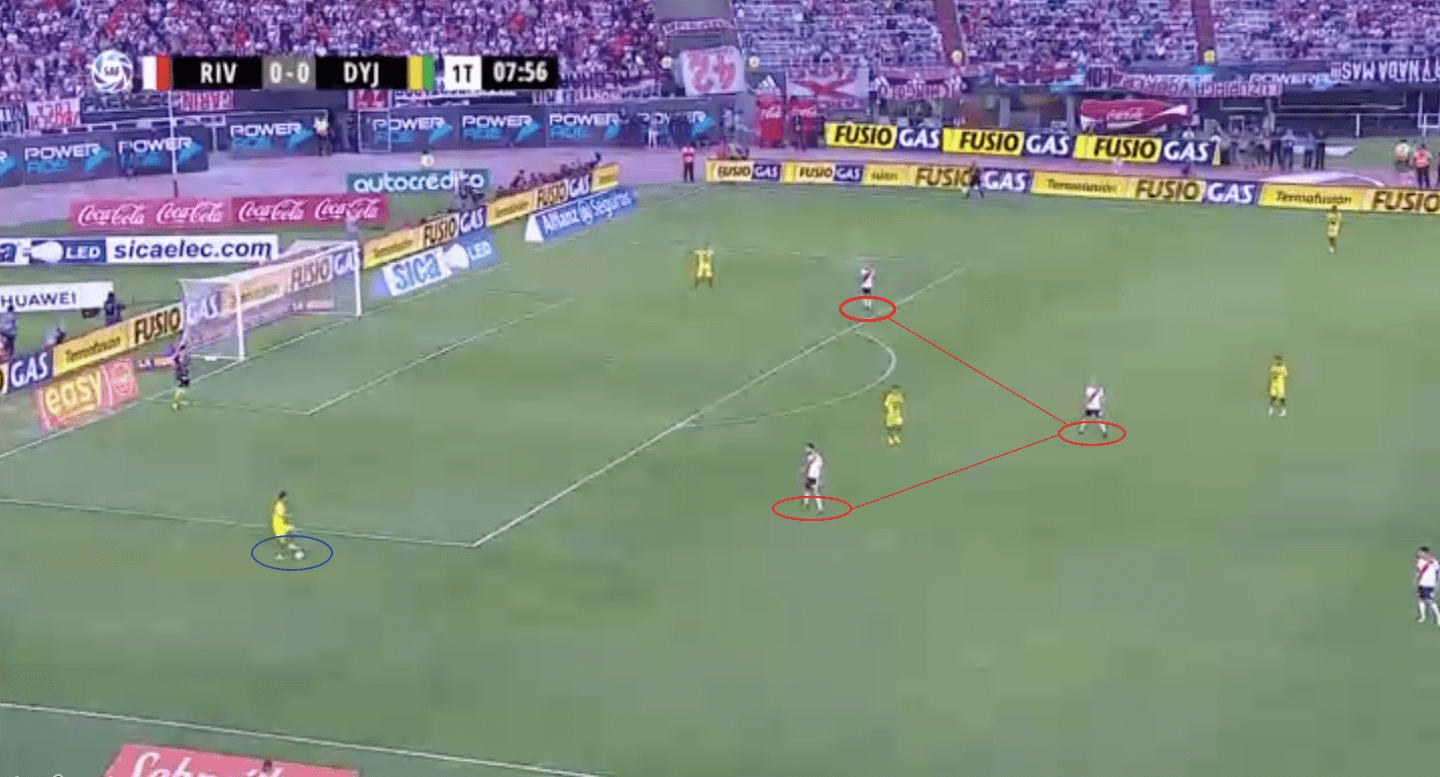 The three River attacking players in red (above) cover the centre of the pitch when Defensa have a goal kick. 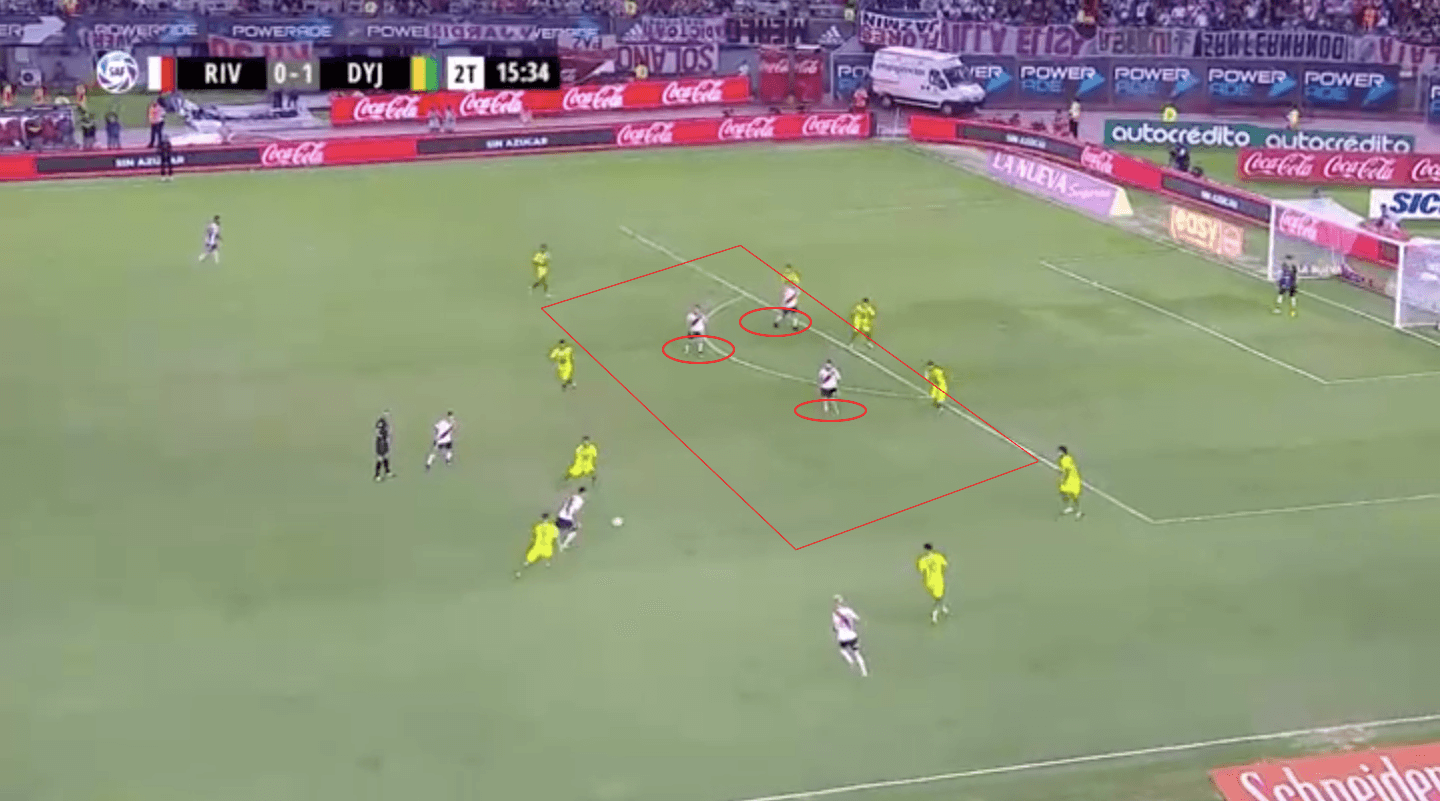 This (above) was the sort of position that River had been trying to work into for the majority of the game.

Defensa y Justicia have been one of the more impressive sides in the Superliga Argentina this season. The side from Florencio Varela are currently second in the table and have yet to lose a game this season, conceding only eight goals in the process.

Against River Plate their shape and set-up changed depending on certain circumstances. When Defensa had the ball they would operate in a 4-3-3 system. Both their wingers and the centre forward Nicolás Fernández would stay very high up the pitch looking to pin back the River Plate defence. This created space for the two more advanced central midfielders, Matias Rojas and Domingo Blanco, to move into.

Defensa operated with quite a strict five players ahead of the ball and five players behind the ball structure. The full-backs would rarely venture too far forward whilst the defensive midfielder Leonel Miranda would hold his position in front of the back four and at times become quite detached from his attacking players. What this offered Defensa y Justicia was defensive solidity. It’s no surprise that they have such a good defensive record so far this season.

However, the team did become somewhat disjointed at times with large spaces between the front five and the defensive five. Nevertheless, River Plate were unable to exploit this. With their front five, Defensa looked to play long direct balls into their forwards and over the top of the River Plate defence. Such plans often created 4v4 scenarios which caused River a number of problems.

Without the ball Defensa operated in a man-oriented press. When River Plate had the ball with their centre backs, Defensa looked to press in a 4-4-2 with one of the central midfielders moving up alongside Nicolás Fernandez. Defensa looked to pounce on any slack touches or loose passes by River Plate and would press high and aggressively.

The front two also prevented one of River Plate’s most dangerous players, Enzo Pérez, having much chance to get on the ball and influence the game. When River Plate were able to move the ball into Defensa’s half the defending side would drop into a low-block 4-5-1 with very little space in between the lines for River to operate in. Below are some images highlighting what has just been mentioned. 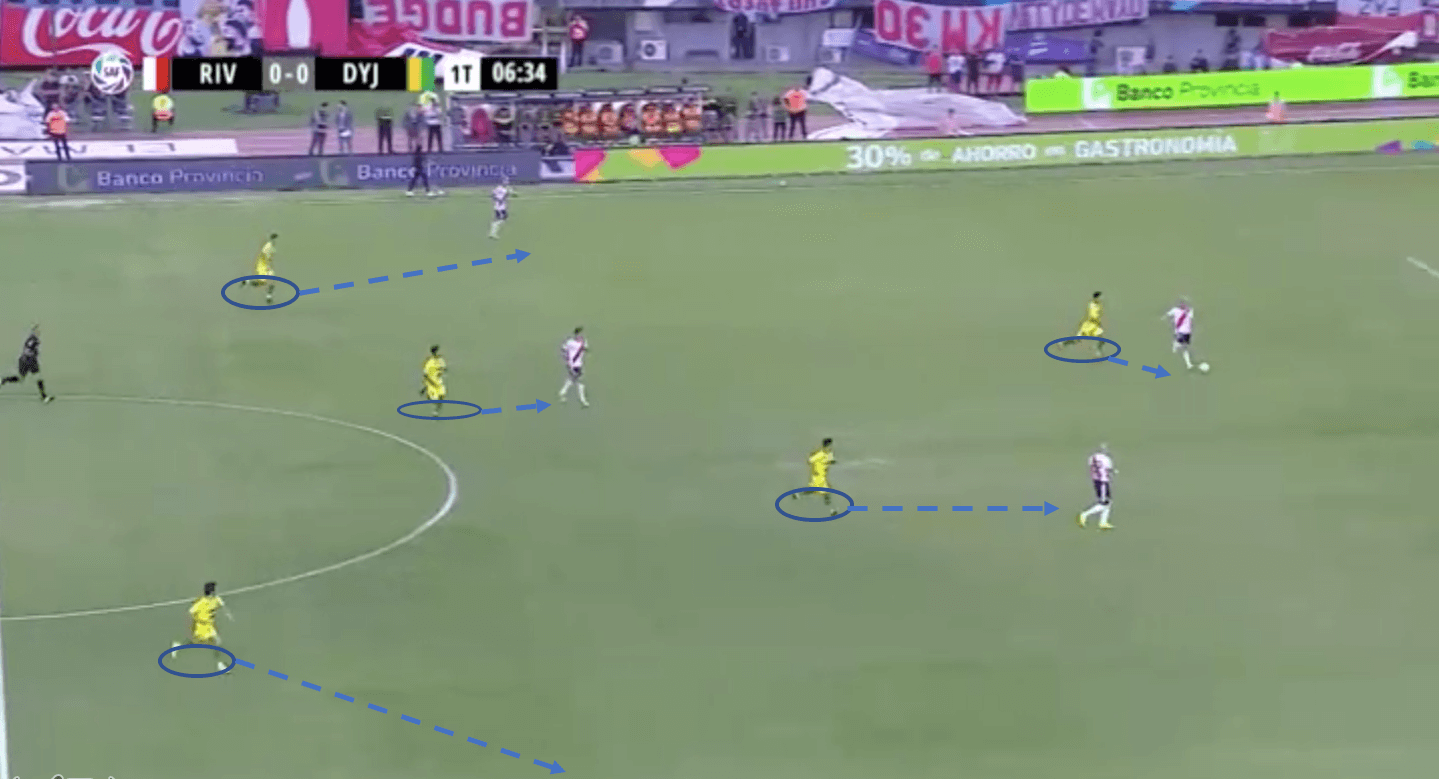 Above we can see that Defensa are attempting to pounce on a loose pass back to one of the River Plate centre backs. Each of the Defensa players is moving to press a River Plate player. 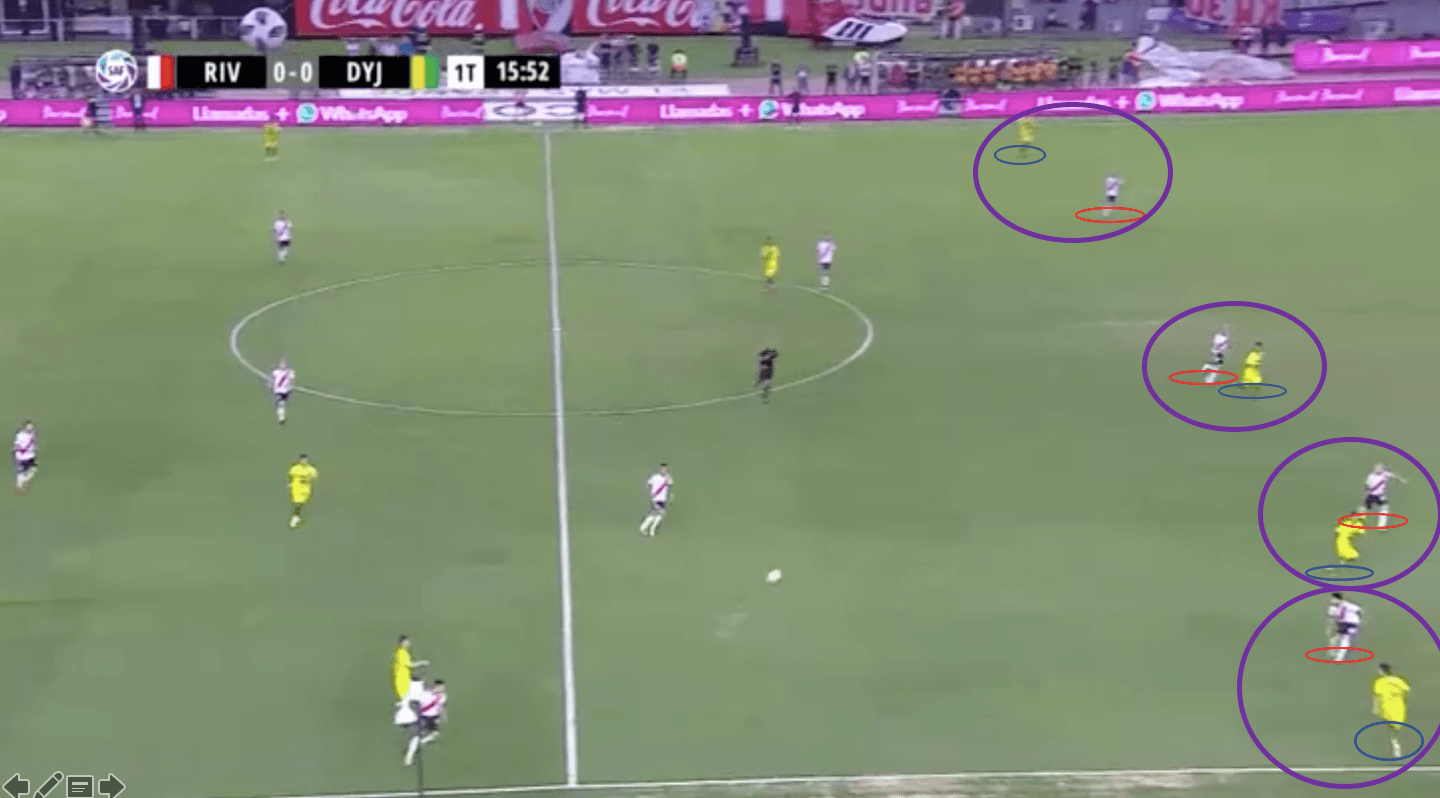 Defensa looked to bypass the midfield area at times and would get their attacking players in 4v4 situations as above. 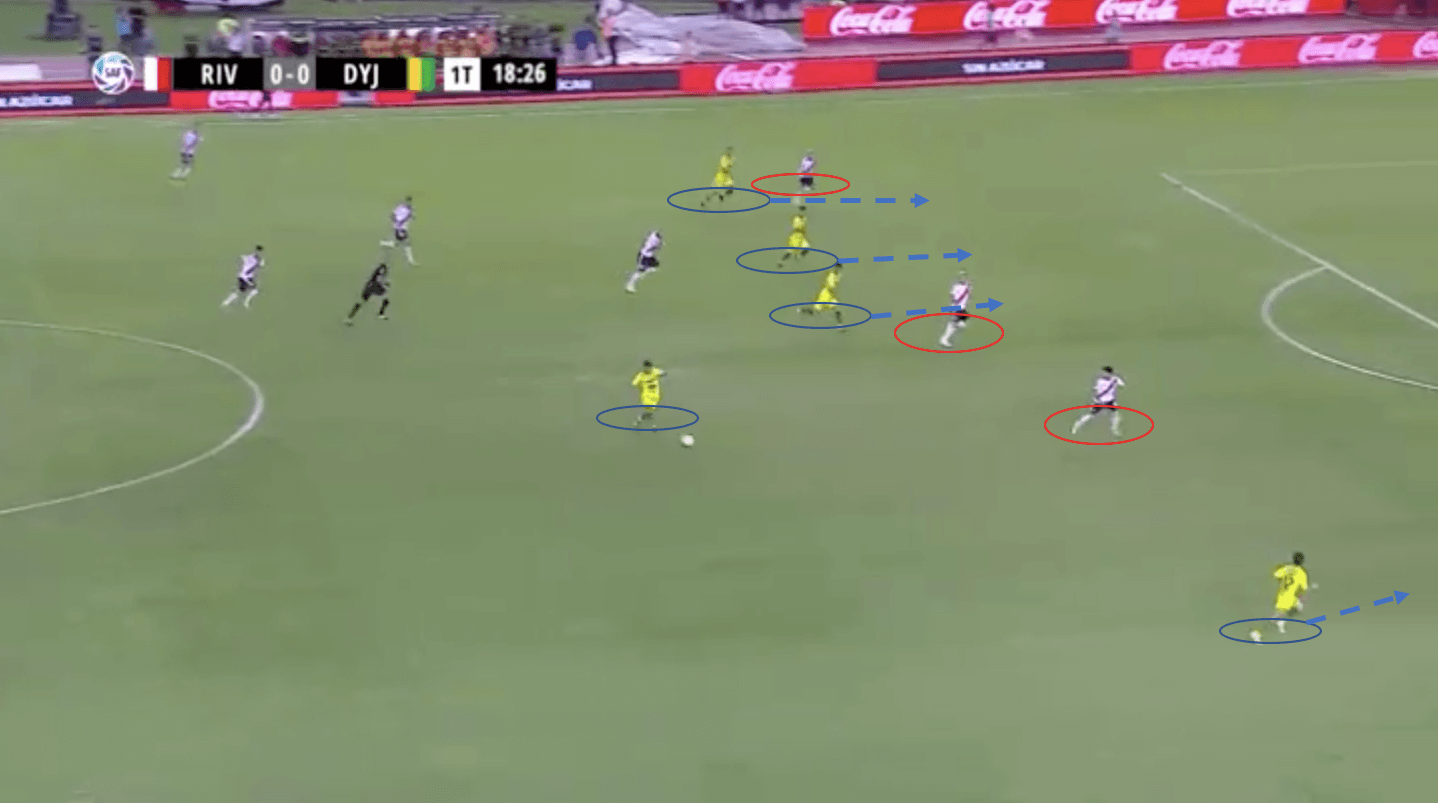 As you can see above Defensa stuck to their strict ‘five and five’ structure when attacking. 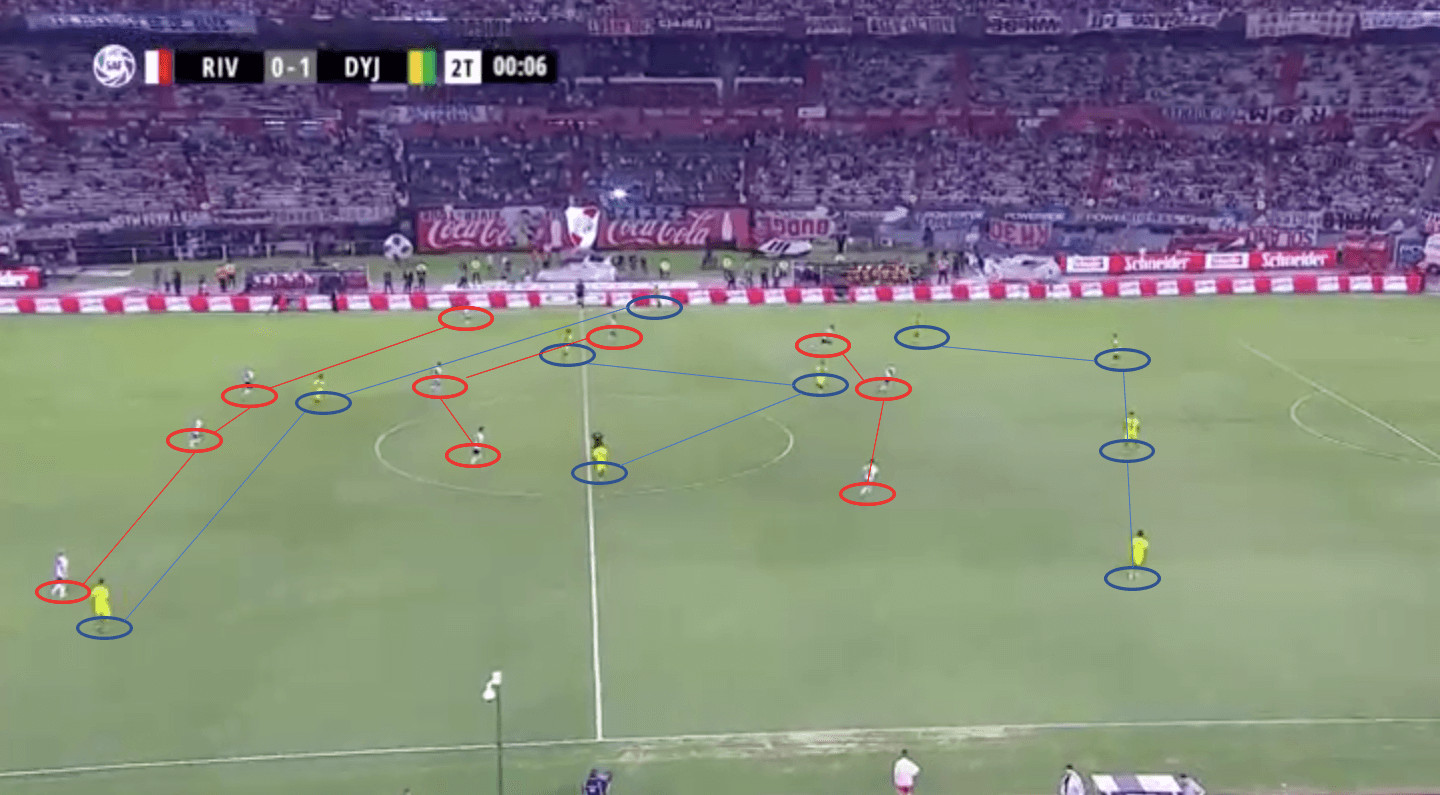 Above is a good image which shows the two respective set-ups. As you can see, River Plate are positioned in their 4-3-2-1 with two attacking midfielders flanking Borré up front. Meanwhile Defensa y Justicia are in their fairly orthodox 4-3-3 with their defensive unit and their attacking unit.

In truth this was a game that was lacking quality across the pitch. It was quite evident that this was Defensa v Justicia’s first competitive game since 8 December, and was River Plate’s first league game since 3 December. It is quite telling that the only moment of true quality was the free-kick by Matias Rojas which ultimately decided the encounter and gave Defensa their first ever win at El Monumental.

Defensa restricted River Plate to very few clear opportunities. Once the away side had taken the lead, they defended well and as a unit. River Plate were quite passive both with and without the ball. It seemed as though their exploits in the Copa Libertadores and in the Club World Cup had taken their toll on their players.

Defensa y Justicia are building a good reputation in Argentina. Having come ninth in the league last season, they ensured qualification for the Copa Sudamericana. Former coach Nelson Vivas was even awarded the Argentina Manager of the Year Award last year. Defensa have gone from strength to strength under new coach and former assistant to Jorge Sampaoli, Sebastián Beccacece, and are in a great position to qualify for the Copa Libertadores this time round. They might even top the Superliga Argentina when the it ends in 12 games’ time.

Given that River Plate have already qualified for next season’s Copa Libertadores, it could be argued that their isn’t much to play for in the remainder of the season. Their remaining focus will be on retaining their crown once the Libertadores restarts in March.