“It was the game that everyone expected, tough with lots of fight,” said River Plate defender Javier Pinola. The palpable hype surrounding the first ever Superclásico to take place in the Copa Libertadores final was always going to be difficult to live up to but thankfully for all onlookers, the match didn’t disappoint. An enthralling 2-2 draw between the fierce city rivals of Buenos Aires has only served to heighten interest ahead of the second leg in this two-legged final.

Boca Juniors were the bookies favourites ahead of kick-off, the current back-to-back Argentine Primera División champions last won the Copa Libertadores in 2007. River Plate, on the other hand, last lifted South America’s version of the Champions League only three years ago, in 2015. We take a closer look at how both teams approached arguably the most eagerly anticipated Copa Libertadores final in history.

Though they often play in a 4-4-2 setup, Guillermo Schelotto’s Boca Juniors make use of a variety of formations and can switch fluidly between them over different segments of a game. Schelotto deployed a 4-3-3 from the kick-off on Sunday, leaving star name Carlos Tevez on the bench, the Argentine legend has become somewhat of a bit-part player in the twilight years of his career. Boca’s 4-3-3 looked designed to provide width for the Azul y Oro with wingers Sebastián Villa and Christian Pavón key to their attacking intent.

From the early minutes of the match, Boca looked to control proceedings when in possession by making the pitch big, playing out from the back and using their wide men, Villa, in particular, to shuttle the ball up the pitch in transitions, often pinning River Plate back in their own half. Aggressive in a tackle but calm in possession, Colombian Wílmar Barrios sits deepest of the Xeneizes midfield.

Having the ball is only an asset if you can use it purposefully to hurt and/or frustrate your opponents, possession without purpose can render a team lifeless. For all of Boca’s good build-up play and width, a serious lack of attacking movement killed many decent passing moves and forward momentum.

River Plate boss, Marcelo Gallardo is also a proponent of the 4-4-2 formation but perhaps wisely in such a hostile environment and in such a huge game, began with a more cautious setup. River set their stall in a 3-5-2 formation, becoming 5 at the back in defensive phases. The back three were aggressive and disciplined, not giving Boca forwards time in possession and aggressively pressing any opposition forays into their half.

Quick transitions were key to River’s success in this game, as soon as possession was won they looked to play the ball into the strike pair of Rafael Borré and Lucas Pratto. With Boca playing a back-four, the two strikers could occupy the two centre-backs while the wing backs provided width, either stretching the Boca defence or creating space in wide areas.

Besides a few decent long-range efforts and some half chances from set-pieces, neither side was having much success in terms of chance creation after a half an hour of play. Enter Ramón Ábila, the Boca striker has been prolific of late and while he may not possess elite technical ability, his aggression and physical prowess are utilised to great effect. The Argentine number 9 finally put a finish on a slick passing move from Boca Juniors in the 34th minute.

It’s a good thing La Bombonera doesn’t have a roof because it would have needed replacing after Ábila’s strike, such was the level of noise from the home support. Boca were in front and deservedly so. But what looked set up to be a dominant display by Boca after the opening goal, took less than 10 seconds to dissolve into chaos.

Set pieces and an increasingly direct approach narrowed the pitch as the match wore on, both team’s second goals were a result of long-range free-kicks floated into the box among very deep defensive lines, needlessly inviting pressure instead of holding a higher line. Playing out from the back was mostly dispensed with as both teams became more compact and direct to limit the chances for defensive mistakes.

Having begun the game with differing formations, both teams chased a winner with mirroring 4-1-2-1-2 setups, the diamond formation. Full-backs pushed high in support while two strikers matched up against two centre-backs on either end of the pitch. One last chance fell the way of unmarked substitute Darío Benedetto in the 90th minute as Carlos Tevez squared the ball across the box but River Plate goalkeeper Franco Armani made himself big and blocked the low shot. 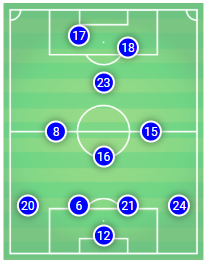 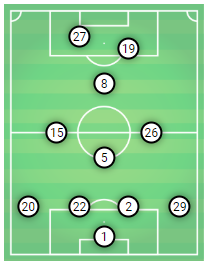 La Bombonera played its part in creating an atmosphere worthy of the occasion. The roar of the Boca fans after Ábila’s opening strike was deafening, the passion of Argentinian football fans is inspiriting and infectious. While Boca may have edged proceedings in this first-leg, they cannot complain about the final result having failed to dominate the game. Two weeks, however, is more than sufficient time for Schelotto and his men to perfect their approach ahead of the second leg.

River Plate, on the other hand, got exactly what they came across town for, Gallardo’s men frustrated their rivals and capitalised on their opportunities. Should the El Monumental crowd reproduce the fever pitch of La Bombonera in the second leg, Los Millonarios will have the edge as they look to win their fourth ever Copa Libertadores trophy.

If this first encounter of two is an indication of things to come on November 24th, it will surely be the hottest ticket in world football this side of Christmas. Whether both teams alter their approaches in the second leg to be more tactically astute or if they simply let chaos reign, fight and spirit paramount in an end-to-end game, captivating entertainment and wild scenes are an absolute guarantee. Argentinian football has never had this global an audience.