Following on from Uruguay and Venezuela, in the next instalment of the series analysing the top South American prospects born after 2000 we look at Argentina

Argentina are in the process of making up for lost time and blooding lots of young players under “caretaker” boss Lionel Scaloni. From the mid-nineties through to 2007, Argentina dominated at youth level, winning five U20 World Cups with incredible football scores and ushering in a raft of talented players who would go on to star for the senior side.

However, since then it’s been a different story. Among other issues at the AFA, youth development has been neglected and performances have dropped, resulting in a situation where Argentina took one of the oldest squads to Russia 2018 and are now having to deal with wholesale changes rather than a planned transition. The recent friendly versus Brazil, though only a narrow 1-0 loss, still showed how much work there is to do.

Nevertheless, more in spite of the system than because of it, Argentina does continue to produce fantastic prospects. The likes of Lo Celso, Paredes, Mammana, Dybala, Icardi, Pavon and Lautaro Martinez show that there is reason for optimism, even if defence still seems an area with a great depth of options.

Below, we look at a selection of players born after the year 2000 who have the potential to be future stars of the Albiceleste.

Velez’s 17-year-old enganche famously hails from Fuerte Apache, the same gritty neighbourhood as Carlos Tevez, and has been tipped as something special for quite some time. Diminutive and imaginative, the young attacking midfielder is part of a long line of Argentinian playmakers that excel both at dribbling as well as threading killer through-balls. 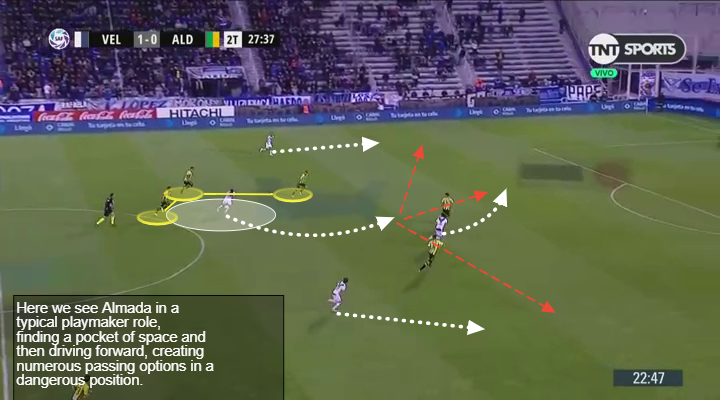 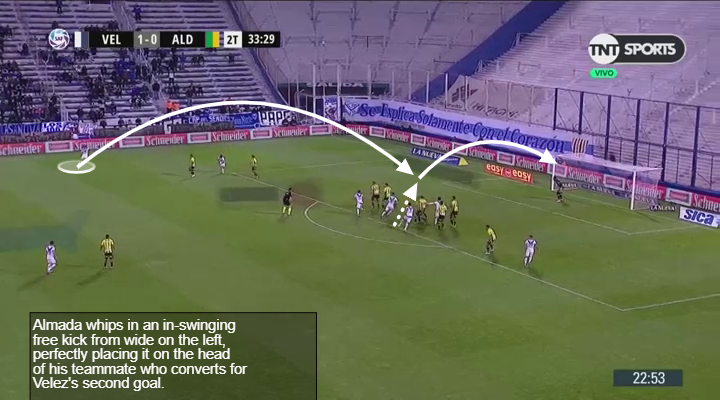 A regular for the U20s, Almada is making his first steps in the Velez side this season. Having initially made a few appearances of the bench, he repaid the faith shown in him by boss Gabriel Heinze by bagging two goals on his first start in a 3-2 defeat to Defensa y Justicia. 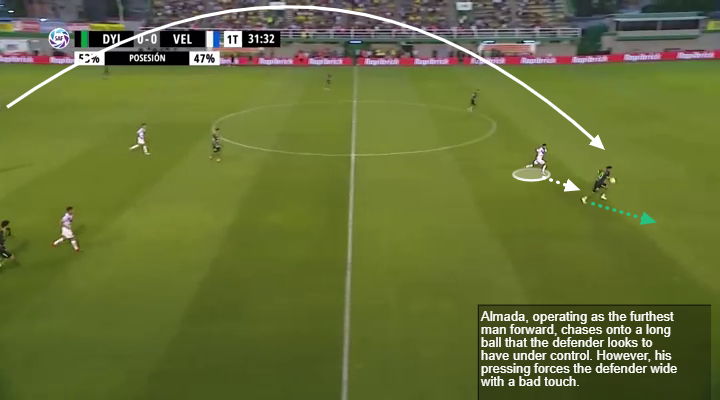 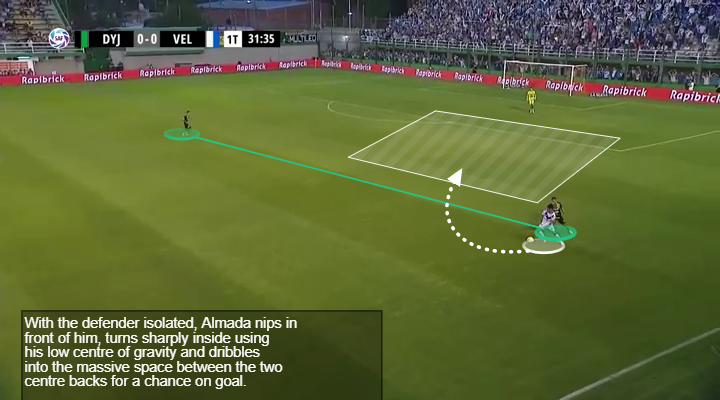 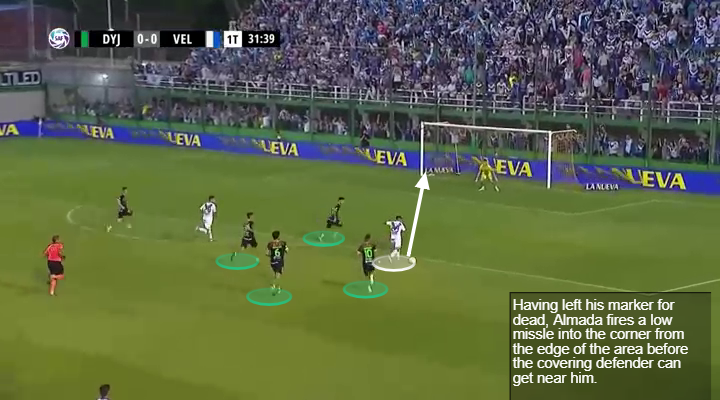 Guayo was selected by Jorge Sampaoli as part of the sparring squad ahead of the World Cup to train with the senior team, while he was also included in the Guardian’s Next Generation 2018. It’s early days but all the signs point to a bright future ahead for the young Fortinero.

The tall, graceful midfielder may still only be 18 but has already carved a spot for himself in a Boca squad packed full of talent. Originally a number 10 and compared to Riquelme in his early days, Almendra has developed into more of an all-round central midfielder, even capable of slotting into a more defensive role when needed. 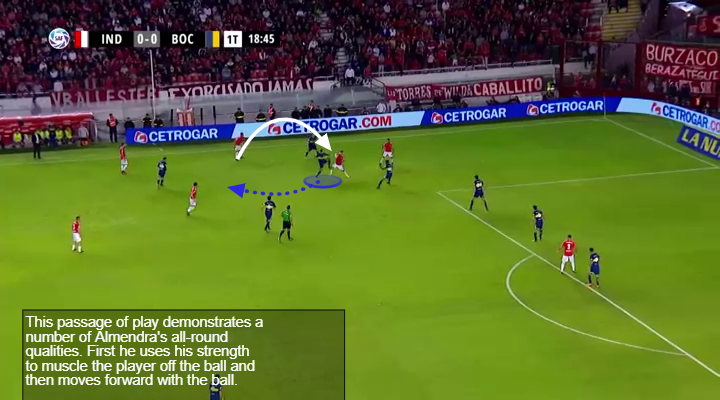 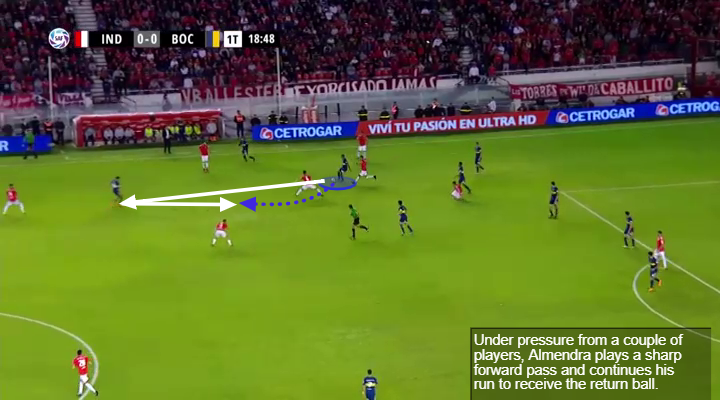 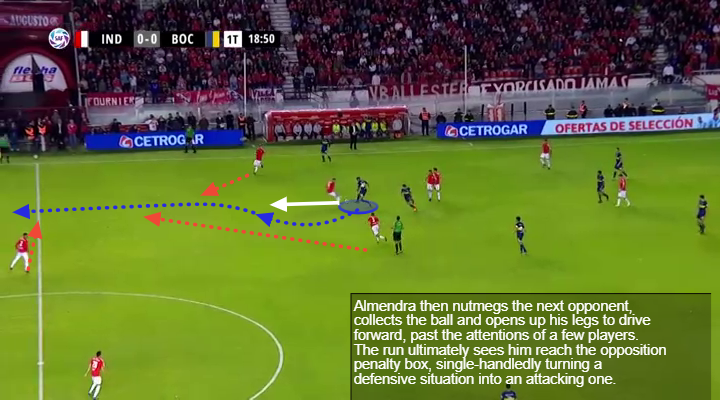 Almendra previously captained the Argentina U17s and was a key factor in the U20s win in L’Alcudia earlier in the year. In his eight appearances at the time of writing, he has averaged an 82.3% pass completion rate and has proven himself strong in the challenge and an intelligent reader of the game. 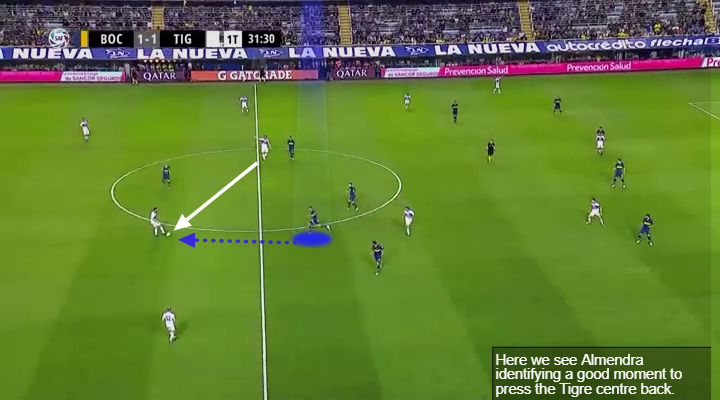 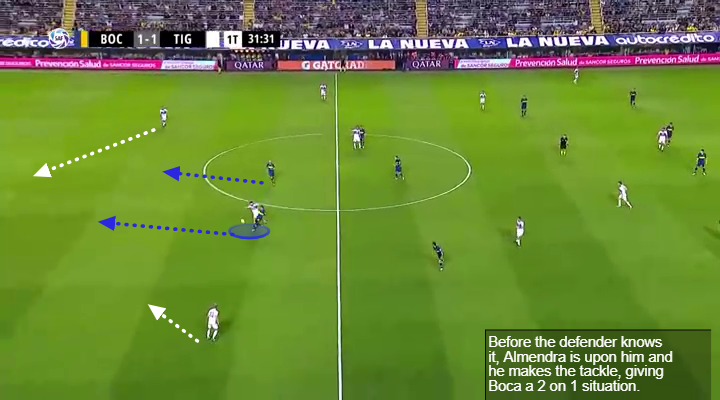 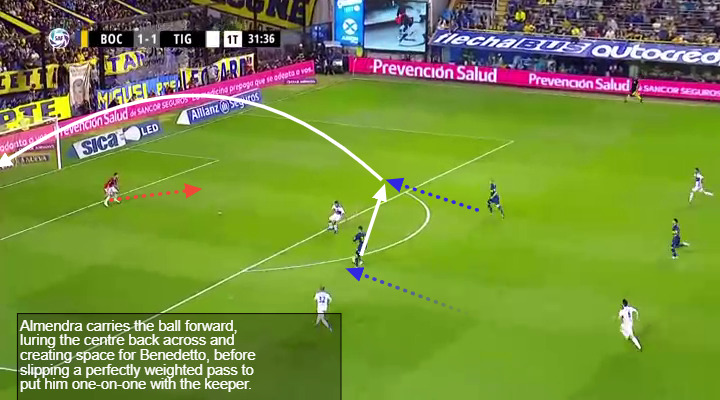 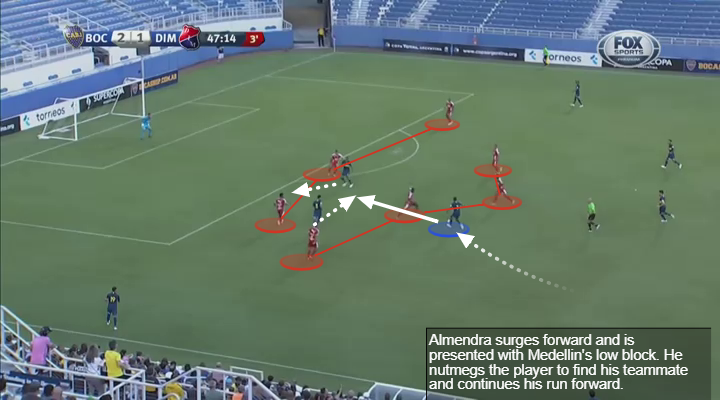 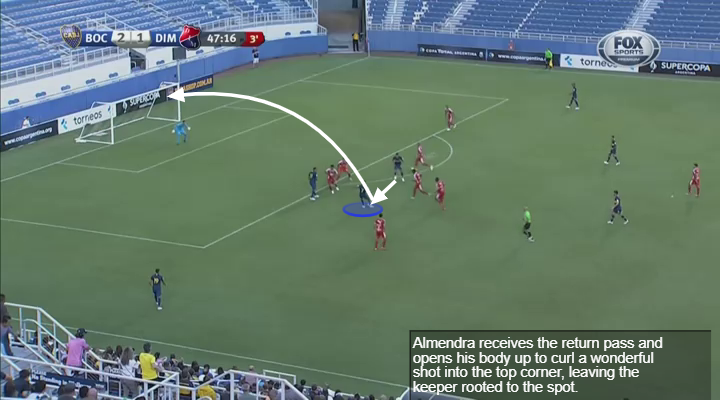 While not necessarily the quickest, his long strides and good technique can see him surge forward and he also possesses a fearsome shot from distance, as shown by his excellent goal versus Medellin in pre-season. Given his physique and the lack of midfielders of his type in Argentina, he could well be a player with a big future ahead.

Banfield’s fox in the box striker may only be 18 but has already got 20 league appearances under his belt as well as having made his bow in both the Libertadores and the Sudamericana. Very much still a player used in squad rotation, Carranza nevertheless made a name for himself last season with 5 goals in 14 games last season, displaying his intelligent movement and lethal finishing. 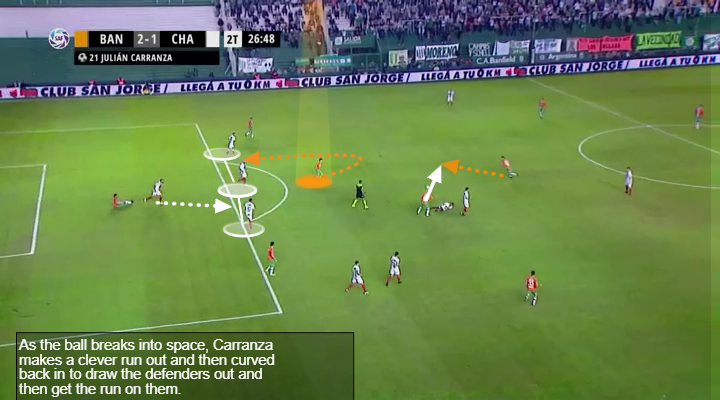 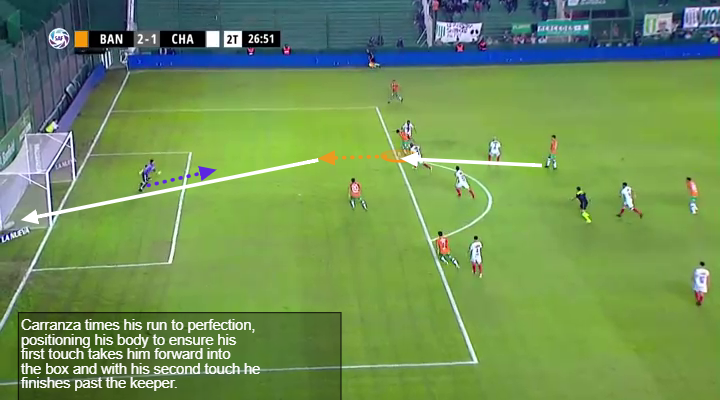 With Cvitanich in good form, chances have been few and far between so far this season but he showed his opportunism and ruthlessness with his goal against Belgrano below. 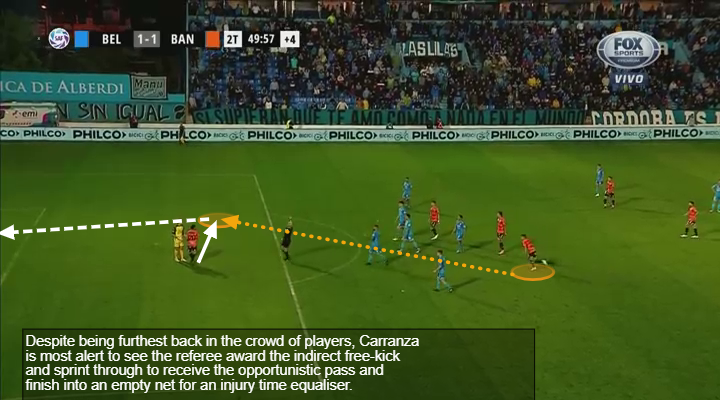 Ajax are already rumoured to be interested and it won’t be long before others start paying attention too. Fortunately for El Taladro, Carranza has signed a new contract that will keep him at Florencio Sola until 2022.

Another diminutive attacking midfielder, Estudiantes’ winger Matias Pellegrini burst onto the scene in the second half of 2018 with some big performances against Boca and Independiente. If that wasn’t enough, his second ever start for the club came in a crunch Libertadores knock-out tie versus reigning champions Gremio 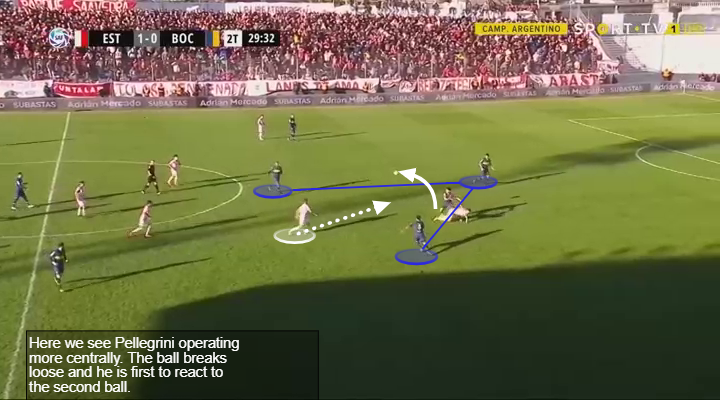 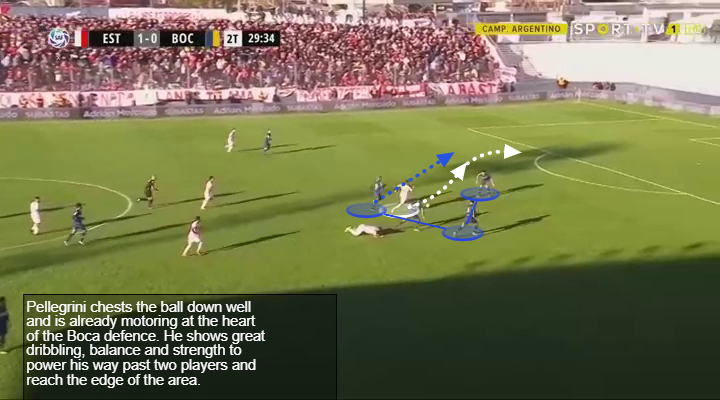 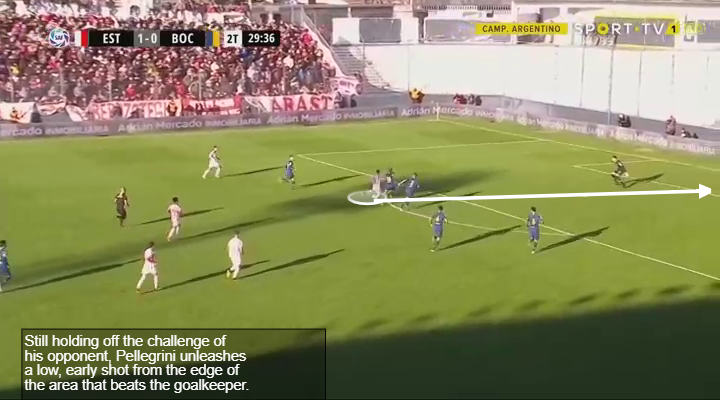 With his low centre of gravity, stocky build and quick feet, Pellegrini excels at taking men on and committing defenders. In his favoured position on the left, he likes to whip crosses into the box and can also unlock defences with smart passes when operating more centrally too. 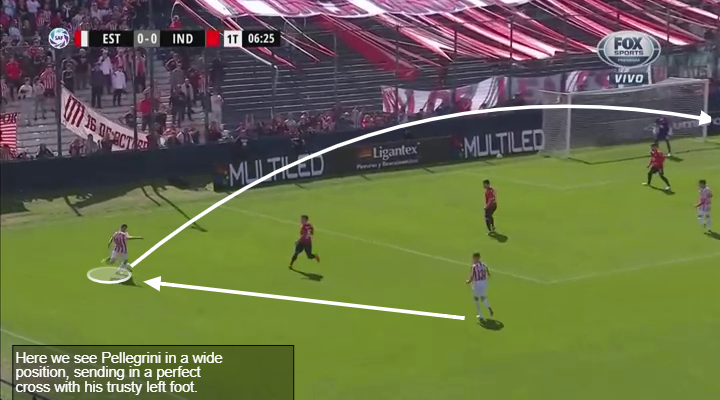 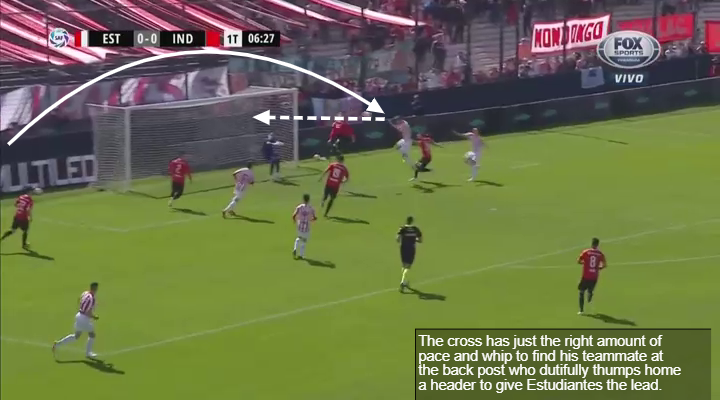 Pellegrini also has a good shot from distance and a great work ethic and, even though his passing and discipline need some refining, looks to be a really interesting prospect. 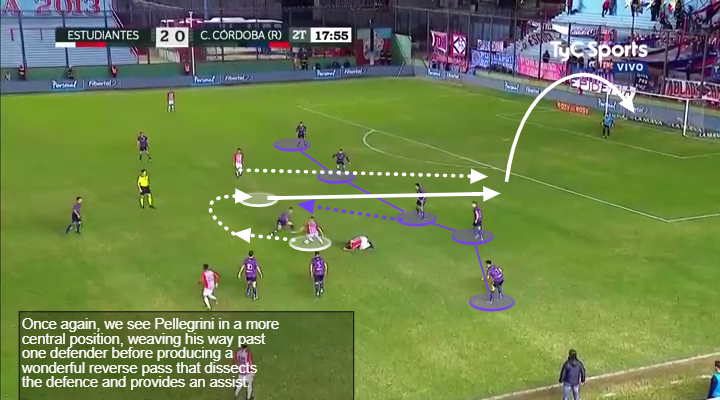 No relation to Juan Sebastian, the 17-year-old striker scored his first goal for Argentinos Juniors in August to become one of club’s youngest ever scorers. Given their reputation as one of the best producers of youth talent in Argentina, that’s no mean feat and Veron looks to be the next off their prestigious conveyor belt. 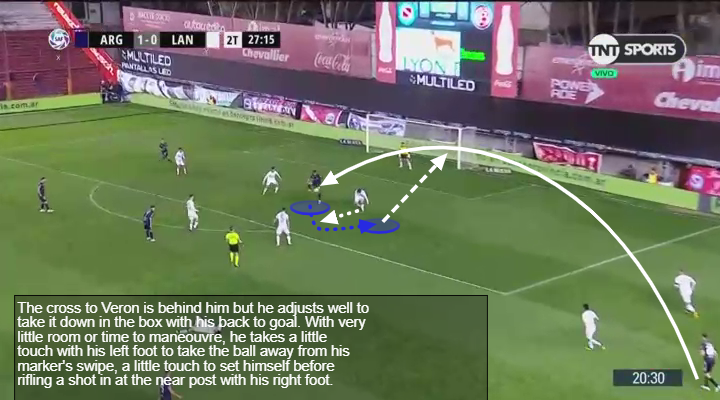 Already a very well-rounded forward for his age, Veron has a bit of everything. He’s mobile, links up well with his teammates, has good pace and dribbling, whilst also being able to hold his own in the air too. 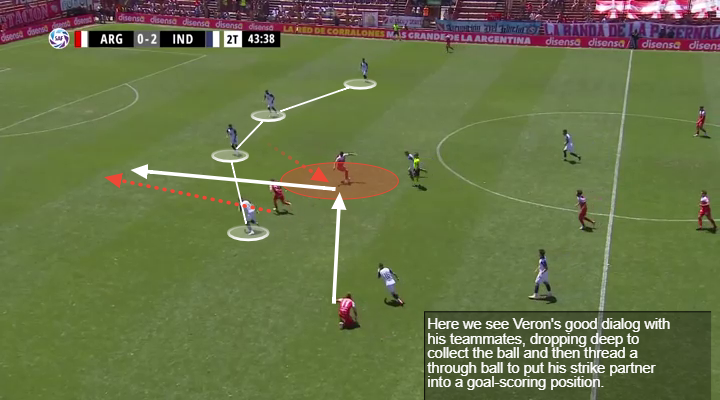 Though not able to show his best for a struggling Argentinos side, Veron remains a precocious talent and should hopefully also feature for Argentina in the U20 Sudamericano, while Italian side Atalanta are reportedly monitoring him closely.

If you love tactical analysis, then you’ll love the new magazine from totalfootballanalysis.com – 118 pages of pure tactical analysis covering topics from the Premier League, Serie A, La Liga, Bundesliga and many, many more. Get your copy today for just £4.99 here