The Copa Libertadores is the showcase tournament for South American club football, that is not to say though that the tournament is always dominated by the giants of the continent In 2016, the final saw Atletico Nacional come up against Independiente del Valle of Ecuador, with the Colombian side coming out as winners and 2013 saw Olimpia of Paraguay reach the final where they were defeated by Atletico Mineiro of Brazil. Unlike the UEFA Champions League then, there is still a chance for the smaller sides to come out as winners or at least reach the latter stages.

The 2018 final however saw the exception to that rule with the final coming down to two sides who count amongst the giants of South American and world football in River Plate and Boca Juniors, as an added dimension to this match these also represent the most storied rivalry in Argentinean football and hail from the same city, Buenos Aries.

Such was the depth of feeling surrounding this fixture that this second leg of the final had to be at first delayed and then moved completely to Spain after the River Plate fans attacked the Boca Juniors bus as it was heading towards the Estadio Monumental, the home stadium of River Plate, to play the second leg. The change of venue did not, however, dampen the sense of intrigue around the fixture. People around the World wanted to see this match and gauge the quality of South American football. Were they then disappointed? It is hard to say, the quality of football on display was at times lacking with tactical and technical errors littering the play but the passion and spectacle as a whole were unlike anything that we see in European football with the exception of one or two specific matches.

It took extra time, a sending off and the introduction of a mercurial talent to settle the tie but River came out victorious, how exactly did they manage that? 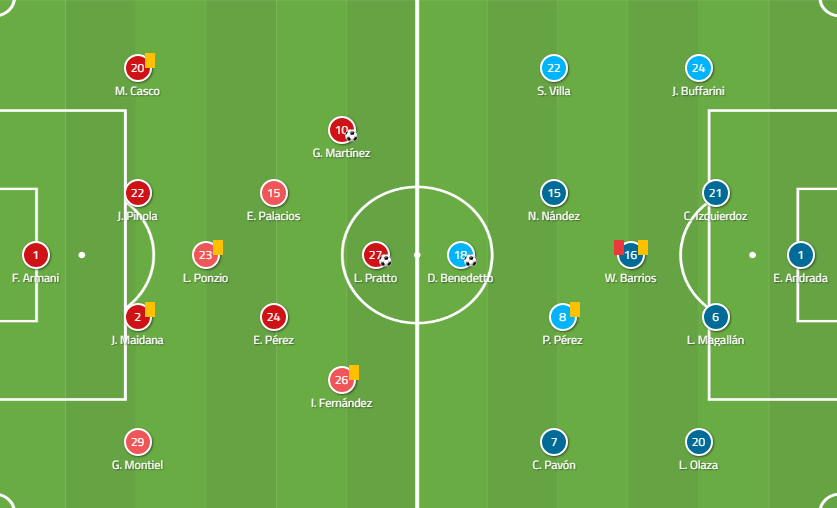 No huge surprises from either team in terms of the way that they lined up in this match. The home side relies largely on experience with the likes of Franco Armani in goal and Leonardo Ponzio and Enzo Perez in the midfield. That experience is carried on into the attack with Gonzalo Martinez and Luca Pratto being joined by Ignacio Fernandez. Gone are the days of River being populated largely by young and exciting young players with their places being taken by older players moving back to Argentinian football following a spell in Europe.

Boca Juniors, on the other hand, combine youth with experience more effectively with the likes of Wilmar Barrios and Cristian Pavon attracting admiring glances from European sides. In Dario Benedetto, Boca also have one of the most dangerous forward players in South American football.

In terms of systems, there were only slight changes with River lining up in a 4-3-3 whilst Boca played a 4-1-4-1 system.

This does not refer to one side but rather to both. There can be an argument made that the size of the occasion and the delay and change of venue had affected both sets of players but the number of technical errors on both sides in what was a showpiece match was still surprising. Passes were overhit or under hit, there were moments that the receiving players failed to control simple passes and possession was at a premium as the ball was fought over ferociously.

This lack of technical quality also spilled over into the tactical side of the game with neither side having the quality in possession to build attacking moments in controlled possession where they could position themselves in a manner that would allow them to push their opponents back. 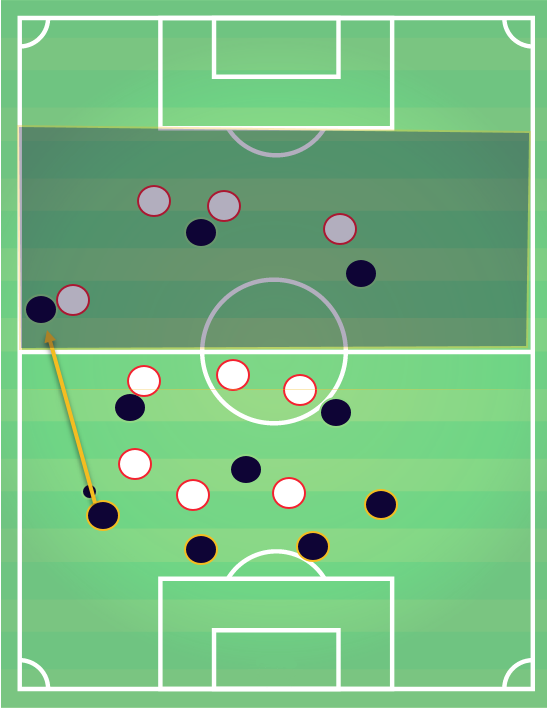 This is just one snapshot taking from the game with Boca Juniors in possessions and looking to progress the ball forward into the River Plate half. In truth, this could come from any one of a number of moments within the game with both sides suffering from the same issues as the ball was progressed too quickly and in a direct manner with the midfield and fullbacks struggling to get forward into meaningful positions from which they could support the receiving player.

This lack of support in the attacking structure led to a difficulty in retaining the ball as the defending team would quickly develop a numerical superiority with four defenders against three attackers in the first instance before one or two of the central midfielders also drop into deeper areas. This led to the majority of chances being created through quick counter-attacking movements as opposed to passing combinations, with the exception of the first goal for River Plate which came as a direct result of these quick combinations and provided a sharp contrast to the quality of attacking build-up seen before.

Neither side was able to utilise their fullbacks effectively in the build-up phase to provide width or overloading situations in wide areas. Instead, the wide forwards or midfielders would move inside to attempt to support the attack centrally and

Indeed this form of disjointed play can be seen as indicative of the overall quality of play in Argentinian football as a whole.

With the tie evenly balanced following a 2-2 draw in the first leg, it was the Boca forward Dario Benedetto who provided the difference in the early stages with the quality and intelligence of his movement in and around the final third. This movement at least gave Boca a target to hit with their more direct passes in the attacking phase, as discussed in the section above this was important given the lack of structure in the attacking phase from both sides. 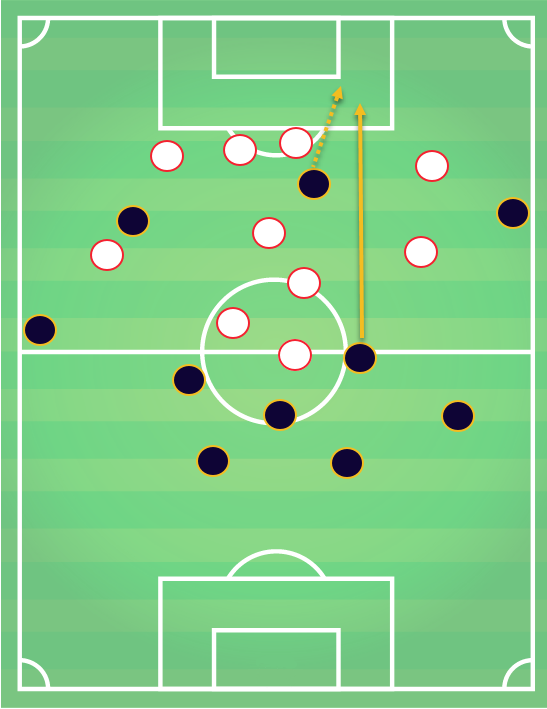 Throughout the first half Benedetto was intelligent in his positioning always looking to identify the blind side of the defensive player and read where the gaps in the defensive line will form. When either fullback was forced to move out to cover the threat of the wide midfielder who had moved to a higher line then Benedetto would make an angled run into the space between that fullback and central defender.

Using these runs and movements the forward was able to create goalscoring chances for this side as the River central defenders struggled to deal with his constant movement. Indeed, the goal that Boca scored came at the end of the first half when a vertical pass was played through for Benedetto to run on to. Neither central defender was able to make a challenge and the forward finished well.

After 120 minutes of football, the match finished 3-1 to River as they won 5-3 on aggregate. In truth, however, the match swung on two key moments. The first was the red card issued to the Colombian enforcer Wilmar Barrios for Boca Juniors and the second was the introduction of his fellow Colombian Juan Fernando Quintero.

Barrios is a combative midfielder so when he collected his second yellow card of the game in the early stages of extra time with the game still on the edge it altered the gameplan for Boca as they became more intent on sitting deep to see out extra time and wait for penalties. This effectively allowed River to enjoy more sustained possession and to attack in a more compact manner, unlike their disjointed method discussed above, with more space in and around the final third for their creative players to take hold of the match.

This is where the introduction of Quintero was key. The attacking midfielder is perhaps best described as mercurial and at just 25 years of age, there is a feeling that he may return to European football again. He previously played for Pescara, Porto and Rennes and although there were moments of quality he never fully settled. Indeed, at one stage the Colombian was ready to give up football completely to pursue a music career.

Here, though, he made the difference with his ability to find space and use the ball intelligently to pick apart the Boca defence, he also scored the goal of the game to give River the lead in extra time. 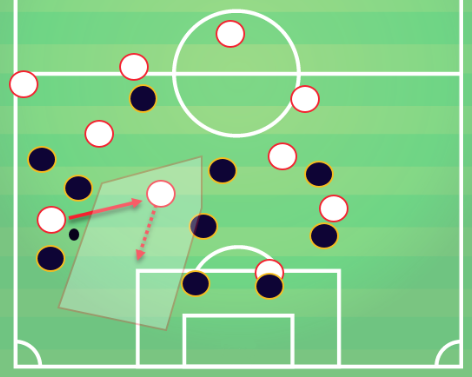 Throughout his time on the pitch we saw Quintero drift into pockets of space throughout the pitch as he received the ball in space and then was able to either dribble, to provoke the press or play through quick combinations to access the penalty area.

There was not much between the two sides over the course of the two legs of this final. In the second leg, the tie swung on a red card which allowed the most creative player on the pitch space and time to weave his magic in the final third.

The quality of play may have been lacking for much of the match but the passion and energy displayed on and off the pitch shows that South American football still retains a level of importance in the global game.