The last time New York Red Bulls and New England Revolution faced off in the MLS, the later managed to sneak a 1-0 home win over their Red Bull rivals. After a 1-1 draw on Saturday, the two teams remain just three points apart in the MLS Eastern Conference.

Despite dominating for most of the first half, New York Red Bulls could only head into half time with a 1-0 lead. As the match went on, New England started to find their feet in the game and equalised in the 65th minute through Gustavo Bou. Find out how game’s tactics developed in this MLS tactical analysis.

Chris Armas showed his attacking intent by lining up his New York Red Bulls in a 4-2-3-1 formation. The three advanced midfielders played narrower, relying on the fullbacks to provide width in the attack.

Bruce Arena picked a more defence-minded setup by starting in a 5-3-2. Defender Andrew Farrell didn’t make the trip to New York as he was out with a suspension. New England Revolution’s line up suggested they were looking to sit back and knick a goal on the counter, but after conceding early, this formation changed. We will discuss this further in the analysis. 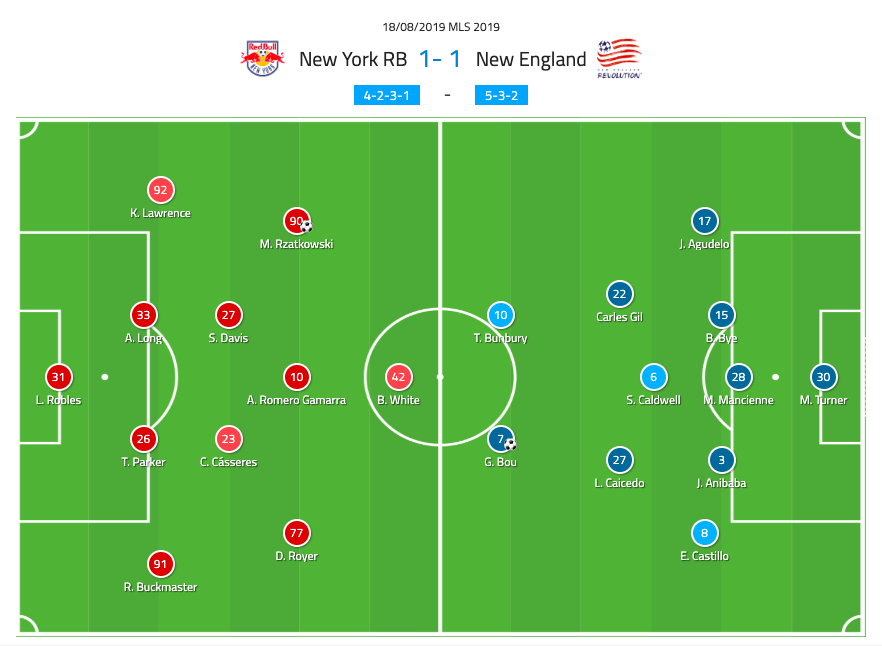 Before conceding, New England Revolution looked quite happy to sit back and defend with five at the back. Despite their lineup suggesting that they played in a 5-3-2, New England had a defensive block of five, with two midfielders sitting in front of them. Carles Gil would push further up the field with attackers Teal Bunbury and Gustavo Bou. We can see the defensive setup in the image below.

Scott Caldwell and Luis Caicedo were tasked with preventing balls into central areas in front of New England’s 18-yard box, encouraging New York Red Bulls to attack down the lines. When crosses were played into the box, New England did a good job of clearing it before it passed the front post. Five men at the back, with two holding midfielders, allowed New England to maintain central solidity.

In the example below, Royer plays the ball into the space for Cristian Cásseres to receive a pass. Caldwell steps into the space to make the tackle, preventing Cásseres from having any time on the ball.

It was clear that, in the earlier stages of the match, New England were more concerned with preventing goals than scoring them. That’s why they played direct after winning possession. They attempted to play counter-attacking football, however, with limited men in the midfield they struggled to hold onto possession on the transition. While the setup helped prevent New England from playing penetrating passes through the middle of the park, weaknesses could be observed when they defended out wide.

Unsurprisingly, New York Red Bulls dominated possession when New England set up with five at the back. Able to commit men forward, the Red Bulls were happy to be shown out wide. This allowed them to overload the right side, drawing out New England players from their central locations, creating passing lanes in the middle of the field. The depth in New England’s backline was sacrificed to create width. That meant, whenever a player stepped out of position, they were left exposed.

On many occasions, New York Red Bulls were able to manipulate New England’s defenders by having three attackers target left wingback Edgar Castillo. In the image below we can see three Red Bulls players playing in close proximity to each other on the right side of the field. With Castillo already occupying this space, midfielder Luis Caicedo shifts over to help defend, leaving Scott Caldwell as the lone defensive midfielder.

The second picture shows how the lack of depth in New England’s defensive setup left them vulnerable. A pass from Alejandro Romero Gamarra easily finds the run of Daniel Royer.

The Red Bulls also resorted to direct play during their attack. The five at the back formation utilised by New England required their wingbacks to venture forward on the attack, this left three defenders back to protect the goal. New York capitalised on this by playing balls over the top to their pacey forwards, as we can see in the images below.

New York’s eventual goal came after a direct ball over the top, capitalising on New England’s disorganisation on the transition. New York could have had scored a winner in the second half after Michael Murillo came on for an injured Kemar Lawrence. The fullback, on multiple occasions, troubled the New England defence with his blistering pace down the wing. He operated both on the touchline and in the halfspace, attacking the space behind New England’s defenders who were at this point playing in a back four.

We can see an example of Murillo attacking the empty half-space by playing a one-two with Alejandro Romero Gamarra. After breaking the backline, Murillo was able to cut the ball back into the space. Murillo provided New York with an opportunity to break New England’s defensive lines on the dribble as well as with penetrative passes.

Shortly after conceding a goal, Bruce Arena recognised how unsustainable his current setup was. Without making any substitutions, Arena abandoned his five at the back formation, pushing Agudelo into the midfield. This allowed Gil to remain forward while providing support for Caldwell and Caicedo. New England started to gain a bit more momentum in the game but were still unable to produce any meaningful spells going forward.

At halftime, Arena substituted Caldwell for Wilfried Zahibo. While both defensively minded, Zahibo strengthened New England’s ability to play out of the back in the second half. Despite having a worse passing accuracy during the game, 76% compared to Caldwell’s 86.3%, Zahibo was vital in the build-up leading to New England’s equalising goal.

Zahibo managed to find pockets of pace to receive the pass and play out in another direction. Had Caldwell played for longer with an additional midfielder, perhaps he could have been successful in this role as well. We can see Zahibo both attacking free space and creating free space for his teammates in the images below.

It is clear that New England’s decision to play in a conservative was quickly abandoned after conceding early in the game. The addition of another man in the midfield, regardless of who it was, strengthened their ability to build out from the back.

We can see the shift in possession in the graph below. New England moved Agudelo into the midfield around the 23rd minute, just before they started to control the possession. After they scored they began to drop off again.

New York Red Bulls had a couple of great chances to win the match in the later stages of the game but were denied by New England goalkeeper Matt Turner. New England’s shift in possessional dominance was achieved after some clever readjustments by Bruce Arena and resulted in an equalising goal. Neither team could push for a winner and the game ended 1-1.

Both teams are fighting to maintain their playoff spot with New York Red Bulls facing both DC United and NYCFC in the next week. New England, however, have an ‘easier’ match against Chicago Fire, but will still need to be on their best form going into the game.