The Portland Timbers started the season with 14 games on the road, as Providence Park was undergoing an upgrade. As a result, they are amid 10 games at home, with only one of their remaining matches away from the Rose City. The Timbers came into this match in the final play-off spot but were only five points behind Minnesota United in second place. After a poor start to the season, Portland have slowly climbed up the MLS Western standings largely through the effort of Designated Player Brian Fernandez, who is leading the team with 10 goals in the league.

Atlanta United have struggled this season on the road, only picking up nine points from 11 away matches in the league. Atlanta’s problems on the road come in stark contrast to their home form, which is the best in the league. Their strong home form has put them in second place in the MLS Eastern Conference, only three points behind Philadelphia Union for first place. A key component has been Josef Martínez, who came into this match having scored in an MLS-record ten consecutive appearances.

This game is a rematch of the 2018 MLS Cup Final, which Atlanta United won 2-0 at the Mercedes-Benz Stadium. Since 2000, the winner of the MLS Cup has only won two of 18 rematches the following season, but Atlanta United were able to beat the odds in this match. The visitors started this match strongly and were able to take the lead in the 14th minute from a sloppy goalmouth scramble.

After Atlanta took the lead, Portland made a couple of adjustments to get back in the match. They still struggled defensively but looked more dangerous on the attack. Unfortunately for the Timbers, Josef Martinez scored 45 seconds into the second half to double Atlanta’s advantage. An impressive save by Brad Guzan in the 65th minute kept the Five Stripes clean sheet, and they were able to prevent any more clear chances to close out the match.

This tactical analysis will look at Atlanta United’s advantage in the wide areas. We’ll also look at the lethality of Atlanta’s attacking trio. Finally, we’ll examine the changes that Portland made to try and get more support for Brian Fernandez in the attack.

Giovanni Savarese made four changes to his Portland side after their 3-2 home victory against the Chicago Fire on Wednesday. Zarek Valentine, Cristhian Paredes and Marvin Loria dropped to the bench, while Larrys Mabiala missed the match with a hamstring injury. Bill Tuiloma, Jorge Villafaña, Renzo Zambrano and Jeremy Ebobisse got the starts.

Frank de Boer made four changes over the side that beat Club America 3-2 at home on Wednesday to win the Campeones Cup. Alec Kann, Emerson Hyndman, and Dion Pereira started the match on the bench while Franco Escobar was out of the squad entirely. Brad Guzan, Miles Robinson, Ezequiel Barco, and Justin Meram returned to the starting line-up after being on the bench against the Liga MX champions. 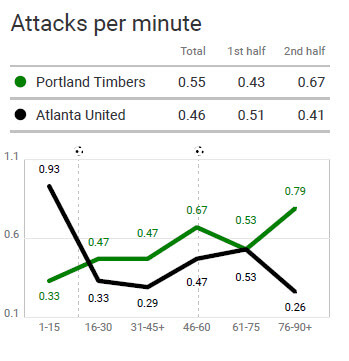 The Five Stripes started this match strongly, and a key component of this was their ability to attack with width. Portland struggled to deal with the threat presented by Julian Gressel and Justin Meram, as they both played very high up the pitch. With both wingbacks playing high up the pitch, Portland’s back four was confronted by five attackers across the width of the pitch.

Ezequiel Barco and Gonzalo ‘Pity’ Martinez are experts at working in the half-space, and they did an excellent job at linking up with Josef Martínez through the middle. They also drifted into wide areas to combine with the wingbacks, causing overloads that the Timbers struggled to deal with.

As we can in the image below, Barco and Martinez moved centrally to support Josef Martinez. This drew the fullbacks in tight with the centre-backs. This created space for Justin Meram to drive forward. This opportunity came within the first 100 seconds of the match.

Eventually, Portland were forced to bring their wide players deeper to help defend against the wingbacks. Both Jeremy Ebobisse and Sebastián Blanco played in deeper positions to help their fullbacks deal with the rampaging forward runs of Atlanta’s wingbacks. Even with this change, the majority of Atlanta United’s attacks came from the wide areas, and this was obvious from the passes in Portland’s penalty area.

Meram and Gressel weren’t just important through crosses and cut-backs. Gressel has an impressive passing range, and this was on display for Atlanta United’s second goal. He was able to play a lethal through-ball that cut out five Portland defenders and allowed Josef Martinez to get behind the Portland backline. Martinez took his shot well and extended his scoring streak to an MLS-record 11 matches, but the opportunity was created by the quality of Gressel’s pass.

Atlanta’s front three are firing on all cylinders.

Atlanta United’s attack struggled early in the season, with Pity Martinez and Barco seeming to have problems getting incorporated into Frank de Boer’s attack. The Dutchman’s slow possession-based system didn’t play to the Argentinian’s strength, but in the past few months, we have seen the former Ajax manager adjust his system to take advantage of the tools at his disposal.

This Atlanta United side is much less focused on controlling possession, and building out of the back. They are willing to transition quickly and use the combination play of Barco, Pity, and Josef Martinez to shred defences who are disorganised. We saw this come into play against Portland as both Barco and Pity Martinez would work in the half-space and play combination passes with the Venezuelan striker.

In the images above, we can see that Ezequiel Barco receives the ball in his half near the touchline. He dribbles away from the defender towards the middle of the pitch. He’s able to see that Pity is starting a run into the channel between Portland’s centre-back and right-back. Barco can thread a through-ball in behind the defenders and give Pity Martinez a one-on-one situation against Steve Clark.

Barco and Pity Martinez have become the primary avenue of attack for the Five Stripes in transition. Their dribbling ability and passing range have made them dangerous on the counter-attack. They haven’t had the same success during slower build-ups, but the play of the wingbacks has lessened the burden on these two attacking midfielders than they had at the beginning of the season.

Portland Timbers tried to attack Atlanta United’s outside centre-backs, and they seemed to decide early on that Florentin Pogba. The first chance came within two minutes when Sebastian Blanco got the ball on the left side. He crossed the ball where Diego Valeri was able to get into the space vacated by Pogba. As Portland tried to attack these wide areas, they left themselves vulnerable to a counter-attack.

After a series of Atlanta United counter-attacks, Portland were forced to move their wide players deeper to help defend against the Five Stripes rampant wingbacks. However, this limited their ability to get forward and attack Atlanta’s backline.

After Atlanta United scored in the 14th minute, Portland Timbers switched tactics. The Timbers still defended in a 4-2-3-1, but they switched to attacking in a 4-2-2-2. Jeremy Ebobisse moved up front to play closer to Brian Fernandez. This allowed Brian Fernandez to have more support and also meant that the Atlanta backline had another striker to deal with. Without the ball, Ebobisse worked hard and returned to the right wing to defend.

As we can see in the image above, Ebobisse and Fernandez are now leading the attack from a central position. Sebastian Blanco operates behind the strikers, looking to link the midfield and the attack. Diego Valeri, who struggled to get on the ball in central areas, has moved into the wide area on the right. He is able to find space behind Justin Meram, and this gives him room to operate.

The analysis of this replay of last seasons MLS Cup Final shows this match had much the same result. Atlanta United started strong, but Portland were able to adjust to get back into the match before the quality of the Five Stripes was shown in the end. The Timbers are fighting for a playoff spot in the Western Conference, while Atlanta United are looking to win the Eastern Conference and get a first-round bye. The threat presented by Atlanta United on the counter-attack continues to make them one of the most dangerous sides in MLS, but they need to continue to show that they can win on the road before they can be considered a serious contender for back-to-back MLS Cups.