Pep in possession: A look at how and why City dominated the ball vs Everton

Manchester City are no strangers to setting new records, but that doesn’t make their current historic winning run of 17 consecutive matches any less impressive. The latest win saw them take on Everton, who had just come away from a humbling 2-0 defeat to a relegation-battling Fulham. The lead at the top of the Premier League table now for City is at ten points, with Manchester United and Leicester City both on 46 points. This tactical analysis will look at how Pep Guardiola’s tactics allowed City to control large portions of the game, and ultimately get the win. 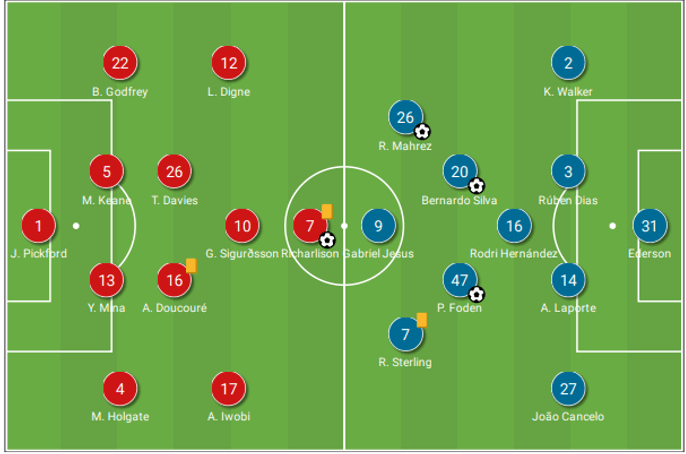 Hosts Everton went with a 4-4-1-1, looking to combat Manchester City’s midfield dominance while also leaving them with enough personnel up-top to cause some damage. As the match progressed, they switched to a 4-2-3-1 for a larger presence in midfield. Jordan Pickford returned to the starting 11 for the Toffees, with a back four of Ben Godfrey, Mason Holgate, Michael Keane, and Yerry Mina. Tom Davies lined up next to Abdoulaye Doucouré in the middle of the park, with Lucas Digne and Alex Iwobi occupying the wide areas. Gylfi Sigurdsson played the number 10 role, with Richarlison leading the line.

4-3-3 was the chosen shape for Guardiola. Gabriel Jesus was supported up front by Riyad Mahrez and Raheem Sterling. The midfield three for City consisted of Phil Foden, who was given a licence to attack and show his creativity; Bernardo Silva and Rodri accompanied him. The defensive performances of late have been brilliant, with Ruben Dias playing a huge part in that. His central defensive partner for this fixture was Aymeric Laporte, with Kyle Walker and Joao Cancelo operating as the full-backs.

It is no surprise to see City dominate possession in games, controlling and dictating the tempo for large portions of a match. Predicting this is one thing, but combatting it is proving to be nearly impossible. In this game, the away side registered 71% possession, making 755 total passes – over double Everton’s total. What makes this more impressive is that they maintained a pass accuracy of 90%.

We get an early glimpse of Manchester City’s football IQ in the image above. After a small combination of passes in the same area, Rodri (located behind the three highlighted Everton players) plays a pass into the feet of Kyle Walker. The initial passing combination caused Everton’s midfield to engage and try to apply a press, but it only left a huge space in midfield for City to exploit. Jesus had dropped in deeper to occupy this space, which Kyle Walker noticed instantly. While it sounds so simple, City’s ability to draw teams out with their possession and create spaces where they want is a dangerous part of their game. On this occasion, despite a poor Jesus touch, City were able to maintain possession, progressing it to the edge of the Everton box before a turnover occurred. The players who are usually involved in City’s possession strategy are what make it so successful – it could be argued that somebody like Bernardo Silva or Phil Foden would be much more effective in the yellow-highlighted space, able to receive the ball on the half-turn and drive City forward.

One clever element that Guardiola has managed to embed into his philosophy is having a wider presence in the opposition half. To achieve this, we often see City convert to a 3-man-defence in possession, with one of the full-backs joining the midfielders and attackers, creating an overload.

Above is a classic example of that. Not only do we see Cancelo acting as a central midfielder to occupy Everton players, City’s attacking formation ultimately becomes 3-2-5, with Sterling and Silva on either flank; Jesus, Foden, and Mahrez inside. This forces Everton into a more defensive state, as we can see above – two deep and compact units to try and limit the space for City’s attacking five. It also gives Pep’s side a number of avenues to consider attacking – they have the option to try and penetrate the midfield unit of Everton and go directly into Foden, Cancelo, or Jesus if they were to attempt this from the opposite side. They could also build an attack out wide with Bernardo, who likes to play right on the touchline in situations like this, and due to Everton’s need to cover the central spaces, Silva is left in enough space to be more then comfortable. For this to be effective, a side will need the in-possession capabilities of this Manchester City outfit, as it has become a staple of their playing identity.

We have just discussed two of Man City’s most effective strategies for possession – in the second half of this fixture, they cleverly combined the two methods to produce a brilliant goal from Riyad Mahrez.

This phase of play comes after some possession in a more central area, before reaching the point that City are at in the image above. The prior passing combination allowed for Bernardo Silva to be open in plenty of space, not far from the penalty area. Upon receiving the ball from Walker, Silva drives towards the area, with Mahrez circling back to make an underlapping run behind the Portuguese playmaker. A smart pass back to Mahrez gave the winger a good angle to strike at, and he struck it with venom to put City back in front. The combination of quick movement off-the-ball and a wide presence in attack meant that City were always effectively one step ahead of their opponents.

Despite trailing to the in-form team in the country, Carlo Ancelotti’s men didn’t shy away from the fight. An important part of Everton’s success this season is their ability to work effectively out of possession – knowing when to press and how to apply it to good effect. Their energetic reaction to going behind caught City out and allowed the Toffees to pull back level only minutes after Foden opened the scoring.

Above, we see City looking to play out from the back, with Cancelo looking to play the ball into Foden on the half-way line. The Everton trio involved – Iwobi, Sigurdsson, and Doucouré reacted to this very quickly, and were able to surround the City star, forcing him to give the ball away to Doucouré.  The positioning of all three Everton men here is vital. Iwobi is able to press Foden while blocking off the return pass back to Cancelo, while Sigurdsson and Doucouré apply pressure and block Foden from moving forward. From here, Everton acted quickly to launch an attack – the attack that resulted in them netting an equaliser.

The two-part analysis below is a breakdown of how Everton finished the attack that came as a result of the defending discussed above. It gives us another example of Everton using triangle combinations, this time putting into effect to work the ball into a dangerous crossing area.

In part one of this breakdown, we see Coleman play a first-time pass on the move into Sigurdsson – the Icelandic midfielder takes a touch before playing the next pass into Iwobi. The fact that Everton were able to overload this small area and outnumber City is a major factor of them breaking through to score.

This attack concluded with Coleman making a run into space immediately after his initial pass into Sigurdsson. From there, he used clever movement to position himself behind the City defenders close-by, but where Iwobi could still pick him out with a pass – which is exactly what he did. Receiving the ball on the half-turn and driving towards the byline, the Irishman floated a cross towards the far stick, and the ball was eventually put home by Richarlison. This was a classic move from Everton: winning the ball back in midfield after some impressive counterpressing, moving the ball upfield quickly and getting bodies in the box, and some admirable passing combination in a tight area to get past City’s defence.

Later in the game, after the Toffees found themselves 3-1 down, they adopted a more defensive approach to keep the score down, but also to preserve energy. Man City were happy to have most of the possession for the final stages of the game after their third goal, and Everton demonstrated that they can apply a disciplined defensive style when required – we didn’t see much in the way of an attack for Everton past this point, aside from the occasional counter attack and short spells of possession.

City’s Success Out of Possession

We are all very quick to applaud the brilliance of Manchester City’s work when they have the ball, but their off-the-ball efforts sometimes go under the radar despite how important it is to their gameplan. Dependant on where the opposition has possession, and how comfortable that possession is, we see City either regroup and set up to defend patiently in units, or we see a lively press from the league leaders.

Even with a comfortable 3-1 lead with around 10 minutes left on the clock, City’s effort remained at the highest level, which speaks volumes about their discipline and the belief they have in Pep’s system. This press was applied after Everton opted to play a short goal kick, trying to play out of defence. City had other ideas – they believe the best way to see the game out is not to shut up shop and simply sit back and defend in your own half, but to control and dominate possession. To do this, they must win the ball back, which is done by energetic pressing in high areas of the pitch to force a mistake from an Everton defender. In this scenario it comes in the form of Keane being pressed relentlessly by Mahrez, forcing the England international to play a long ball upfield, which is cut out by City eventually. This strategy not only limits the physical possibilities for Everton on the ball, but it can also be mentally draining for the Toffees as they know they will have very little time to find and execute the right pass.

Of course, City had to manage their energy levels numerous times in the game, which meant they lowered their pressing intensity when Everton had possession, allowing the Toffees to approach the City half.

We can see in the example above, City are happy to sit a little deeper than usual, while still applying a good level of pressure to limit Everton’s chances of getting to their area. Everton opt not to commit too many players forward at this point, meaning City don’t have to drop too deep or set up too narrow. Their width in the back four allows for an effective midfield set up with just the two midfielders. In front of this, we still see Foden, Silva and Jesus applying just enough pressure to cause a struggle for Everton going forward. City’s presence is heavier on their left-hand side as that is where Everton look to exploit – their presence in central midfield is non-existent.

Another dominant and impressive win for Pep Guardiola’s Manchester City to tighten their grip on the Premier League title. Their ability on the ball will be difficult for even their closest rivals to deal with, as their movement from supporting players is very impressive. Creating and exploiting space in the opposition is a speciality of City’s, and we saw this on numerous occasions in this tie. Going from strength to strength, and with Kevin De Bruyne and Sergio Aguero coming back into the picture, it’s hard to imagine City slowing down any time soon.