The end of the current season is still a few months away but that doesn’t stop the rumour mill from churning out player transfers based on a team’s current situation or contract stipulations. One move that is likely to take place and has come out in recent weeks is that of Dzsenifer Marozsan and Sarah Bouhaddi moving from Olympique Lyonnais Feminin to OL Reign in the NWSL. The German playmaker has been a crucial player for the French champions for years and will need to be replaced appropriately so Lyon do not feel her absence.

Through this data analysis, I plan to investigate potential replacements for Marozsán by looking at her best attributes and comparing them to players in different leagues.

To complete this analysis, we will set a few parameters to create a realistic sample size of players to choose from. Firstly, we’ve looked at Lyon’s transfer history across the last three seasons and most of their first team players have arrived from four leagues: NWSL, FAWSL, Division 1 Feminine, and Frauen-Bundesliga. Players including Sara Björk Gunnarsdóttir, Nikita Parris, Ellie Carpenter, and Damaris Egurrola are players that arrived from these top leagues.

Marozsán is a creative attacking midfielder, so we’ll be looking at a certain set of statistics as a base for finding the replacement. If we look at the dashboard, we can see a number of strong attributes and what makes her such a vital player for Lyon. This sets the benchmark of the type of player we need to find.

This will be broken down into three metrics: ball progression, creativity, and final third contribution. These three metrics cover Marozsán’s main strengths and what she adds to this Lyon team. We will look at players between the ages of 21 to 30 able to play in central and attacking midfield positions with a minimum of 400 minutes to give us enough data to work with and compare in the four aforementioned leagues. Lyon’s likely replacement will likely be someone in this bracket given their recent transfer history. The aim will be to shortlist three of the best players and understand why they might be the best replacement.

Looking at the NWSL, Lyon haven’t bought extensively in recent years but have picked up some important players from the United States in recent years. In January 2021, they signed the highly-rated Catarina Macario from Stanford University whilst the likes of Alex Morgan, Megan Rapinoe, and Morgan Brian have all made the move over. They also loaned in Jessica Fishlock and Jodie Taylor so the NWSL has been a regular spot for taking talent, especially on loan. The links with OL Reign means business between the league and club won’t end anytime soon, so it makes sense to take a closer look at players in the league. 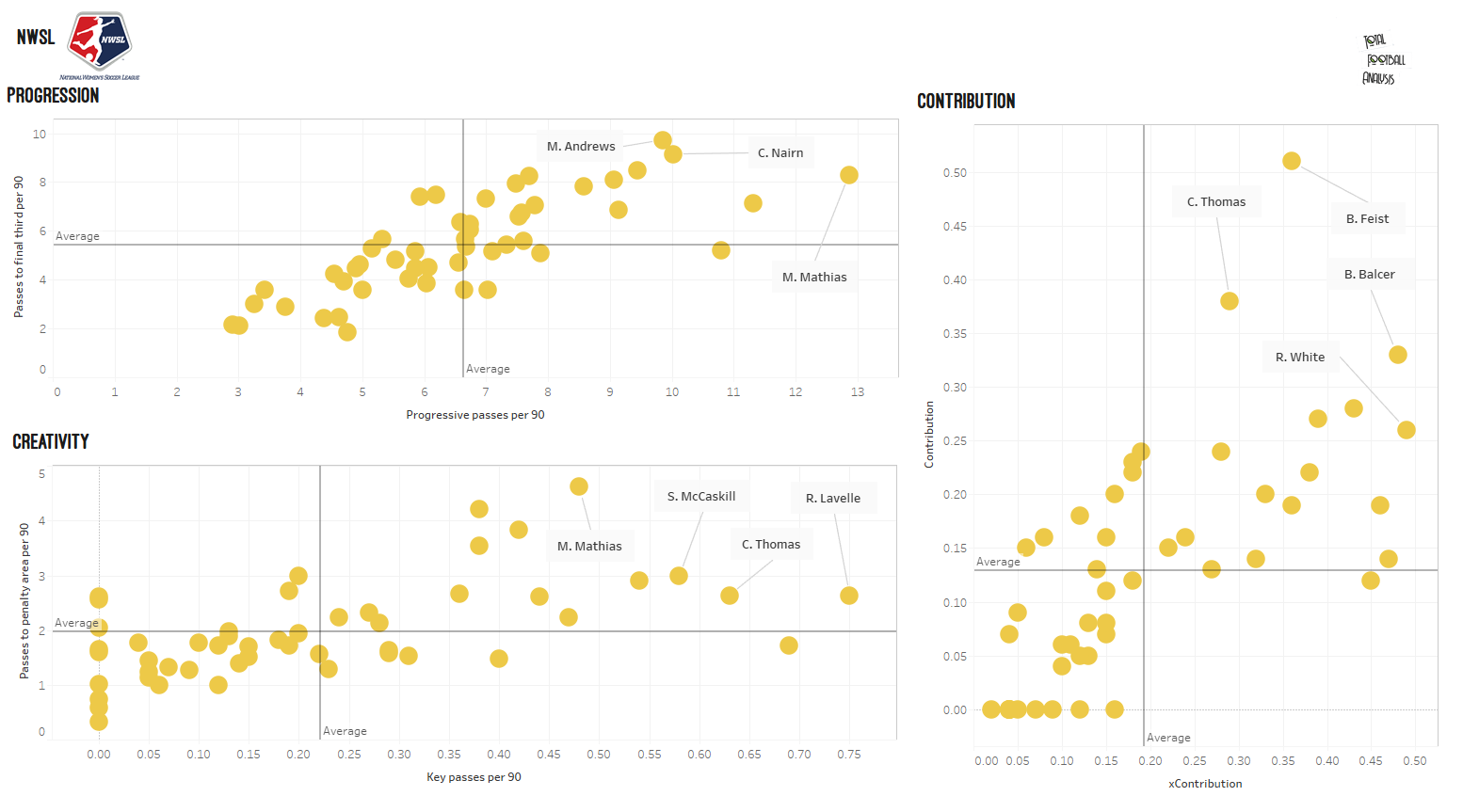 As mentioned earlier, we’re looking at three major categories in ball progression, creativity, and contribution. Analysing the graphic above we can see who the best players are in each category.

Next, we’ll be looking at Division 1 Feminine which is where Lyon make a lot of their transfers by picking the best talent from other teams in the division. Sakina Karchaoui and Melvine Malard are recent purchases. 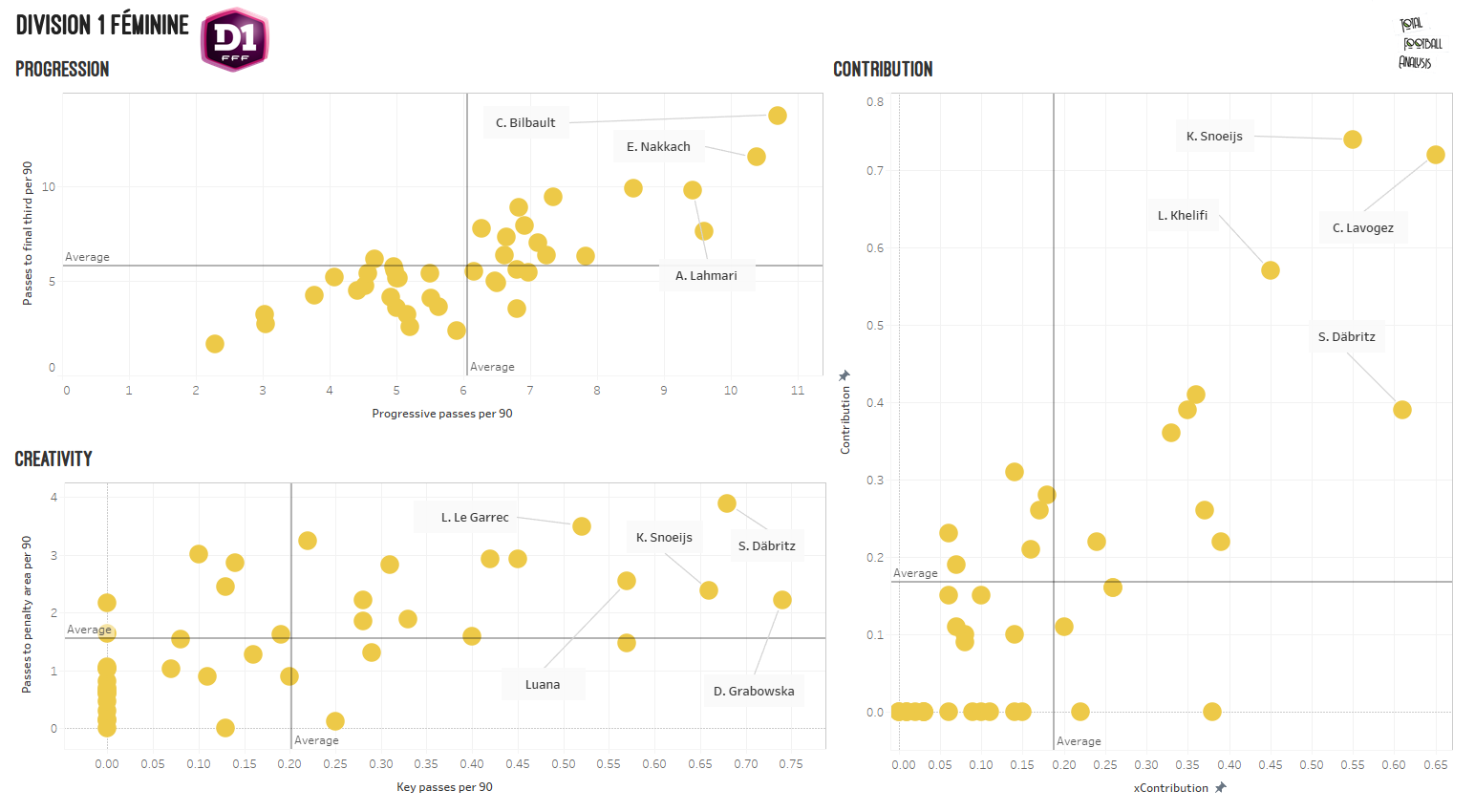 For creativity, there were a few more players that ranked highly including Paris Saint-Germain’s Luana and Sara Däbritz. Lea Le Garrec, Dominika Grabowska, and Katja Snoeijs are the other three. We will not consider Luana and Däbritz due to their allegiance to PSG and the lack of movement between the two clubs.

Finally, we look at the best contributors in France’s first division and a couple of names pop up again in Snoeijs and Däbritz. Lea Khelifi and Claire Lavogez are the other two players. As mentioned earlier, we will not be considering players from PSG because of the likelihood of these moves so both Däbritz and Khelifi are out.

Now, we turn our attention to the Frauen-Bundesliga where they acquired a recent high profile signing in Sara Björk. The league has some undeniably talented prospects which makes it worth looking into. 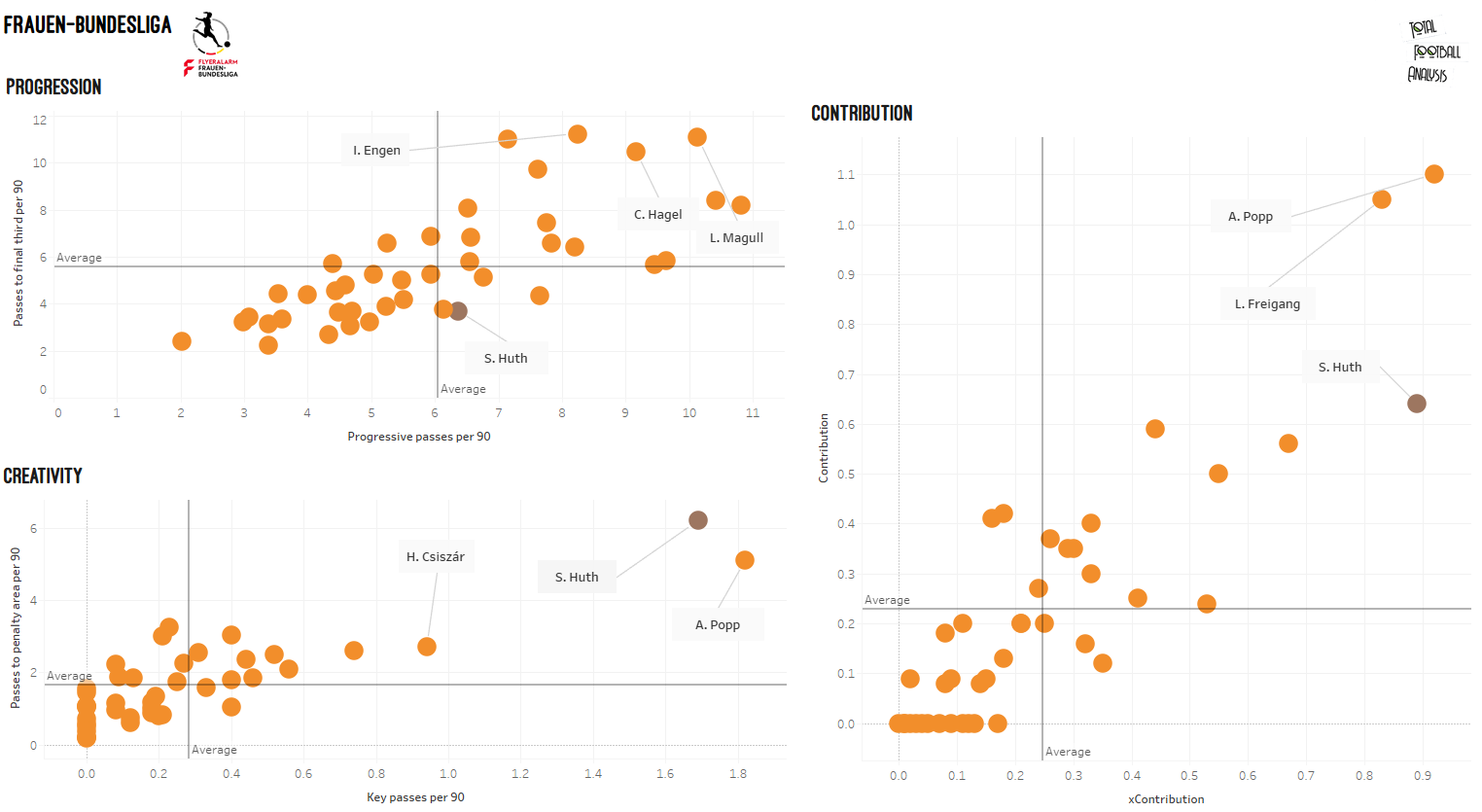 Next, we look at the leagues most creative players. Over here there is a vast distance between the top two and the rest with Alexandra Popp and Svenja Huth coming out on top. Henrietta Csiszár of Bayer Leverkusen comes in at a distant third. To increase our sample size for comparison we are including Csiszár.

Finally, we’re going to look at the WSL and identify players using the same metrics as we have been doing above. The WSL is home to some of the world’s best players and could be a realistic target when it comes to finding a top-quality replacement. 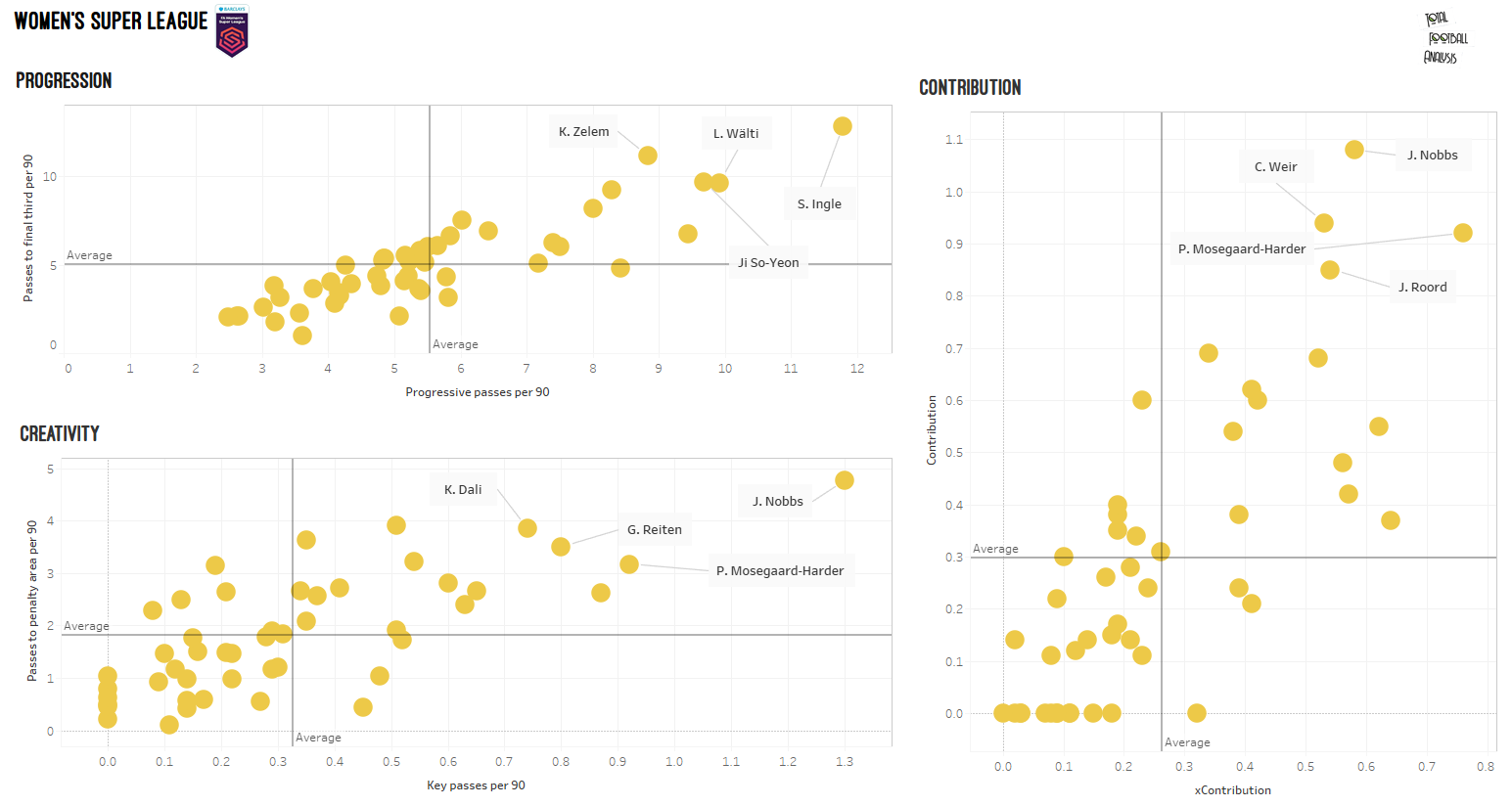 Having analysed the data, we now come to the final shortlist of players we think will be ideal candidates for recruitment. The results of this shortlist were derived using two main factors including the probability of the transfer and play style. If these two factors matched then it made the player a viable option for this analysis. We have narrowed it down to three players and we will now explain the reasoning behind each of these choices. 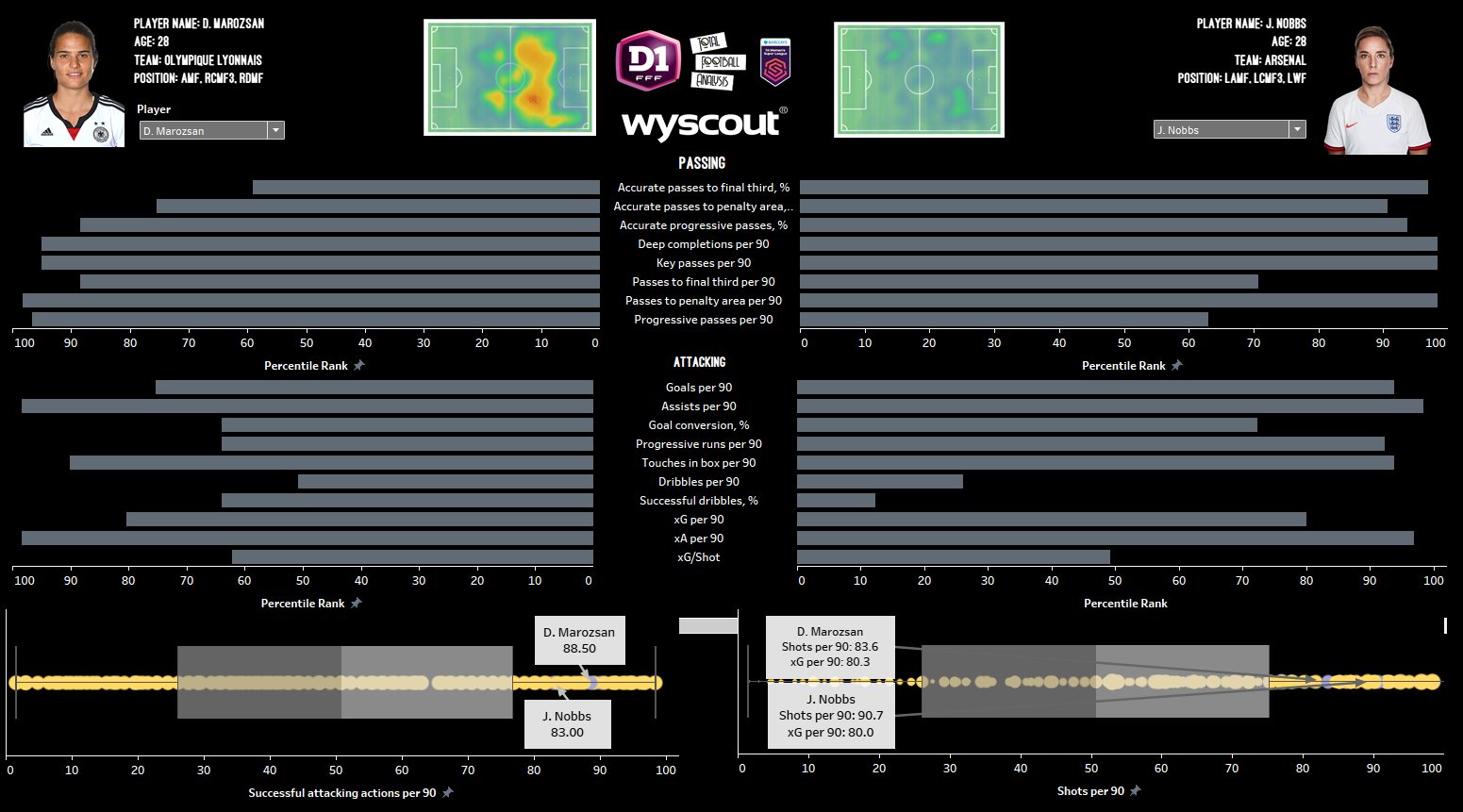 Our first pick is Jordan Nobbs of Arsenal. The dynamic playmaker has been an excellent attacking midfielder for the Gunners over the years who has an innate ability to control the tempo and dictate play. Naturally, a number ‘10’, Nobbs’ play style is that of a roaming attacking midfielder who’s strengths and game revolves around positional awareness, range of passing, and interchangeability. Being an excellent ball carrier, she is able to create space in the forward areas and effectively engages in quick passing moves with her teammates.

Nobbs is able to navigate her way out of high pressing sides which is a common trait between Arsenal’s midfielders and forwards, which makes her a viable option to run play through, especially in such a pivotal position in the middle. Lyon require their attacking midfielder to be press resistant in the attacking midfield area because of the opposing teams wanting to sit deep and press closer to their box.

Nobbs is a great player in transition with her positional and passing intelligence. With a wide range of passing, she can play simple short passes and more extravagant and riskier through balls. In the final third, she acts as both a link player and off-the-ball runner finding spaces in the box which makes a goal-scoring threat.

Arsenal are not having a very productive season and there is a feeling that the team needs a restart. A move away for some players might be what’s needed at Arsenal and Nobbs could want a new challenge and add to silverware to her CV. Positionally and play style wise she could adapt and fit in at Lyon and given the circumstances at Arsenal, this could be a move that makes sense for all parties. 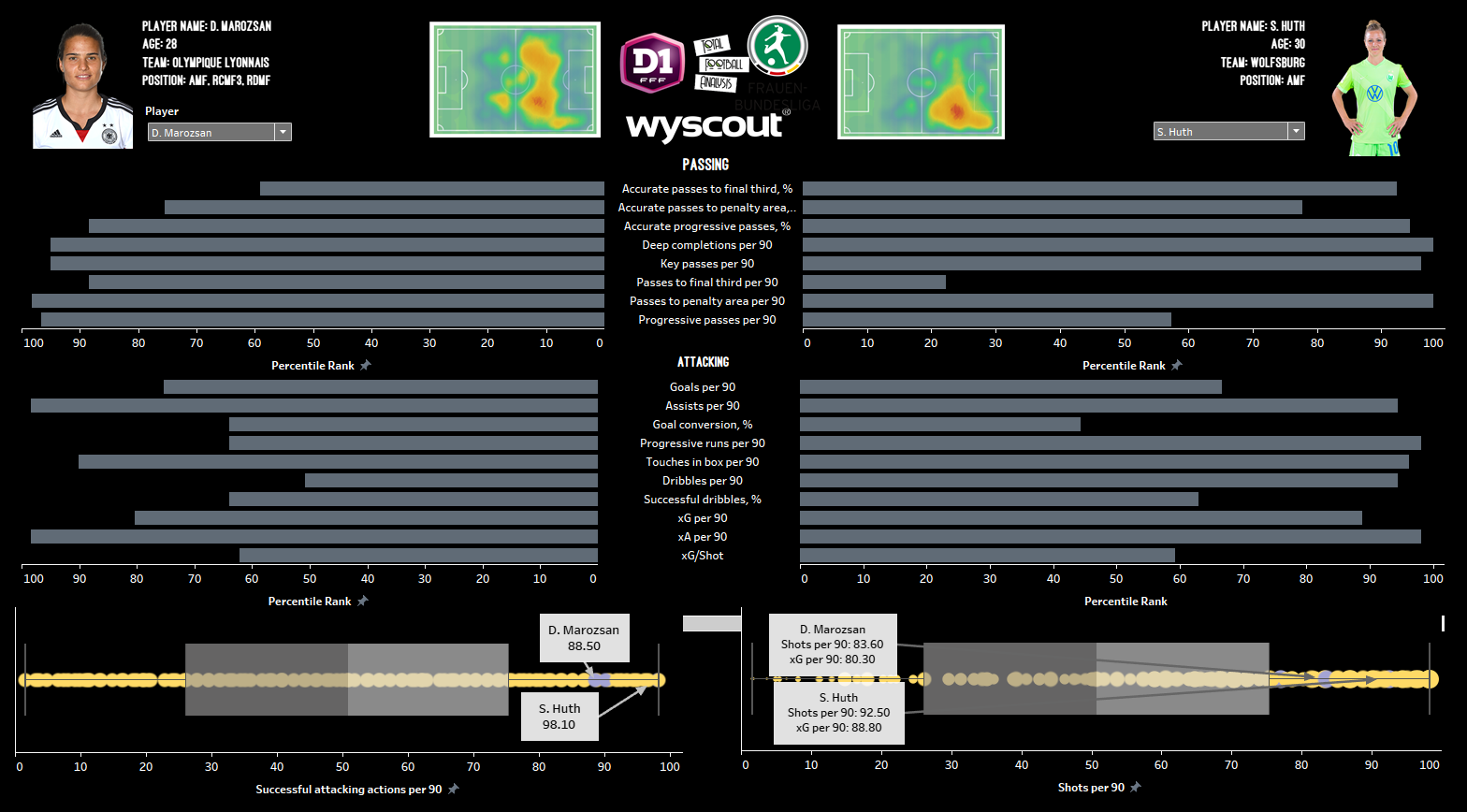 Our second pick comes from Germany in the form of Svenja Huth of Wolfsburg. She has been a strong presence in the centre for the German champions combining her dribbling and creativity to good effect. Huth is an attacking midfielder capable of playing off the wide areas too. Another excellent ball carrier, Huth is a player who excels in her passing ability being able to progress play for her side.

Her ability to play between the lines and ghost past attackers is a major threat and one that acts as a base for her progressive abilities which is a role similar to the one Marozsán adopts for Lyon. Though Marozsán is slightly better from a creative standpoint, Huth isn’t that far behind. If you look at her heat map, a lot of her movement comes off the half spaces which shows that Huth operates in similar areas to Marozsán. Being able to play off the wide areas shows a versatility and gives Lyon a different angle of attack. Her mobility is a big factor in the way she plays which is something that Marozsán lacks slightly.

Huth can be considered a bit more of an attacking threat than Marozsán with her progressive runs, touches in the box, and dribbles which is in the high 90s as can be seen in the dashboard. She is the player that provides the final ball for a more clinical forward to put away and in Ada Hegerberg, Huth would have the perfect target.

At 30 years of age, Huth isn’t the youngest player but if Lyon are looking for a short term solution to the position then the experience she brings is second to none. Wolfsburg aren’t the force they were last season and are currently trailing to league leaders Bayern Munich. 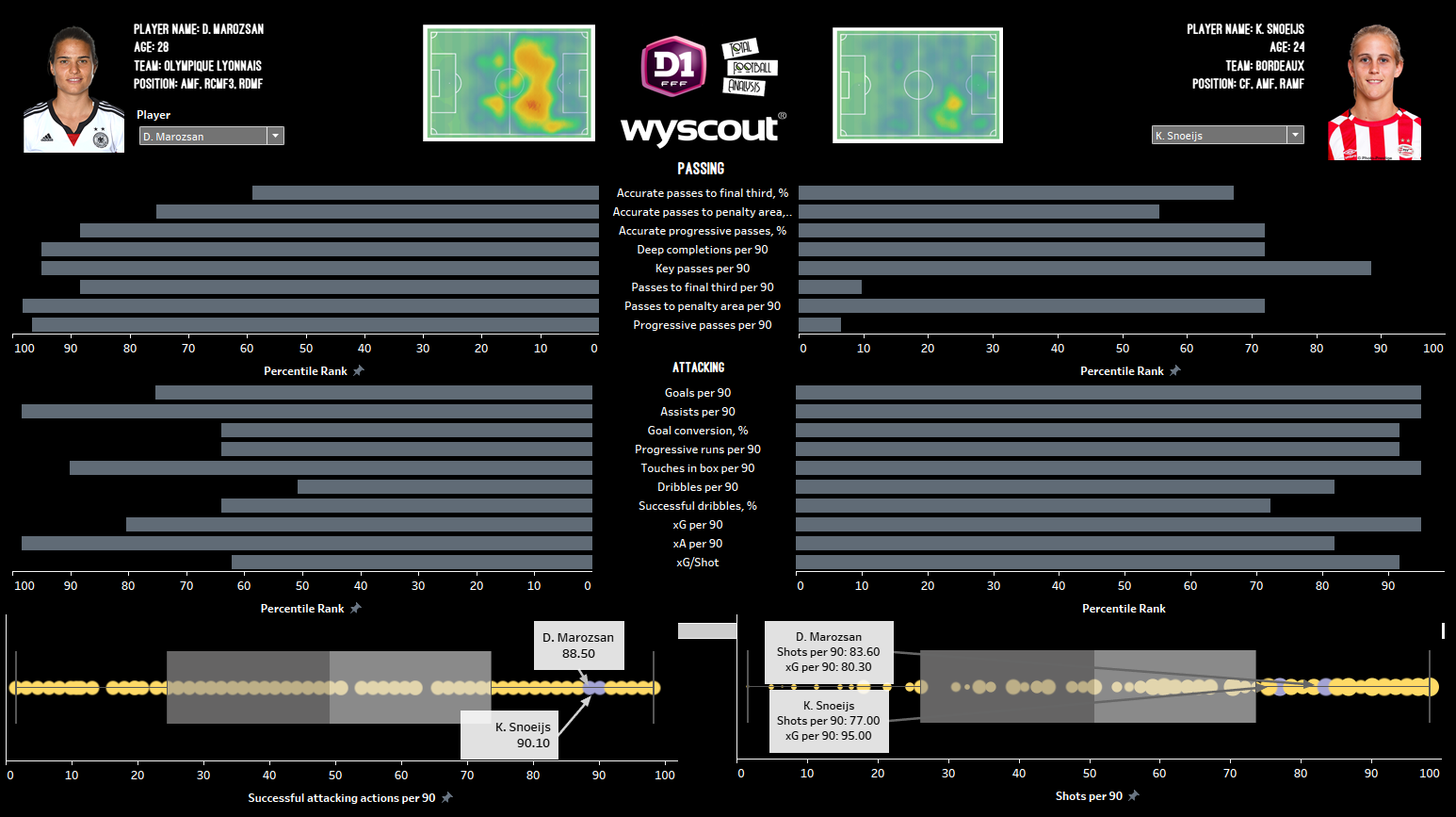 Lastly, we have chosen Katya Snoeijs who plies her trade for Bordeaux. The Dutch international is an attacking midfielder and might just be the most realistic transfer option for Lyon.

A central attacking midfielder, Snoeijs is a naturally talented player whos main contributions come in the final third with her excellent dribbling and off the ball running abilities. Her main attributes revolve around her positional awareness, energy, and goal-scoring abilities. With a keen eye for goal, Snoeijs is a player that probably the most attacking of the three suggested players and could see a change in tactics if she were to be played as a central attacking midfielder.

Not as creative or progressive through her passing as Marozsán, the young midfielder prefers to focus her game around having the ball at her feet and making progressive runs and bring the team closer to goal. Watching her play, you’ll notice that she thrives on space and can draw fouls with her dribbling which remains her strongest asset. Once she draws in players, she’s able to accelerate and pull awy from players and isn’t afraid to take a shot. Though she takes a significantly lower frequency of shots to Marozsán, her xG per shot is much higher, which means her quality of shot is much more effective. This can also be due to having a very clinical striker in Khadija Shaw who profits from the space created by Snoejis. This is a major benefit for the likes of Hegerberg, Parris, and Le Sommer.

At 24 years of age, she presents a younger option and can grow at Lyon with more experienced players around her. Being in France means there is very little adapting that needs to take place and the transfer fee shouldn’t be very high.

Overall, any of these three transfers could happen given specific circumstances but given the way Lyon have been operating in the transfer window as of late, a move for a known quantity might be in the offing. Young, eccentric, and exciting players seem to be the way they are moving forward but experience might be needed in the forward areas given Eugenie Le Sommer’s contract situation isn’t resolved yet.

The summer window will be competitive given the need for change at several clubs so Lyon will need to be smart and quick in their recruitment. The way they’ve navigated through the window in recent seasons has left them short in certain areas and while signing young, exciting talent is a forward-thinking move, however, they are still in transition and bringing a mix of youth and experience will be of utmost importance. 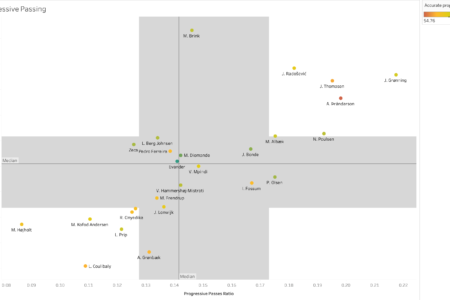 In this data analysis piece, we will be looking out for the best central midfielders currently playing in Superliga using […] 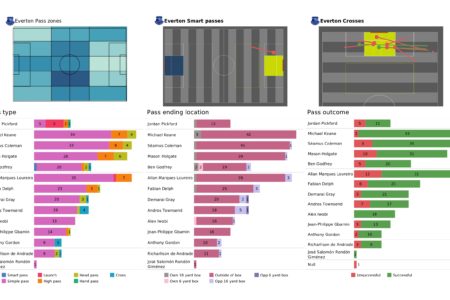 Monday night saw Everton‘s poor form continue, Wolves beating them 2-1 in the Premier League. We’ve broken down all the key […]