The start of the 2020/21 English Premier League season has been nothing short of entertaining. In the 12 game weeks that we have had, there have been a whopping 315 goals scored at an average of 2.65 goals per game. You do need to score goals to win games and while defenders would not be too pleased by the above statistics, the attackers cannot seem to get enough. They are crucial to their side’s chances and the onus is on them to put the ball in the back of the net to seal the maximum points possible. Hence, it is important to have better frontmen in your side and it is also evident as to why the bigger clubs with better attackers are able to consistently finish higher up the league.  In this data analysis, however, we will look at the data and statistics of wingers outside the “Big Six” in the Premier League and identify the standout performers so far this season. The “Big Six” would consist of Liverpool, Manchester City, Manchester United, Chelsea, Tottenham and Arsenal and despite their varying degrees of performances so far this season, any winger from these sides would be omitted from our analysis.

As mentioned above, no player among the “Big Six” clubs would be considered in this analysis. Furthermore, only players that have played a minimum of 500 minutes for their respective clubs have been taken into account and these players should have played down the wing for the majority of their games as their statistics would not be comparable otherwise. For this reason, players who have operated at other positions primarily and only played as wingers in certain matches or phases have been omitted from our analysis as well. Our analysis will look at various data such as the goal involvements, passing and dribbling statistics of the eligible wingers in order to identify the key performers. 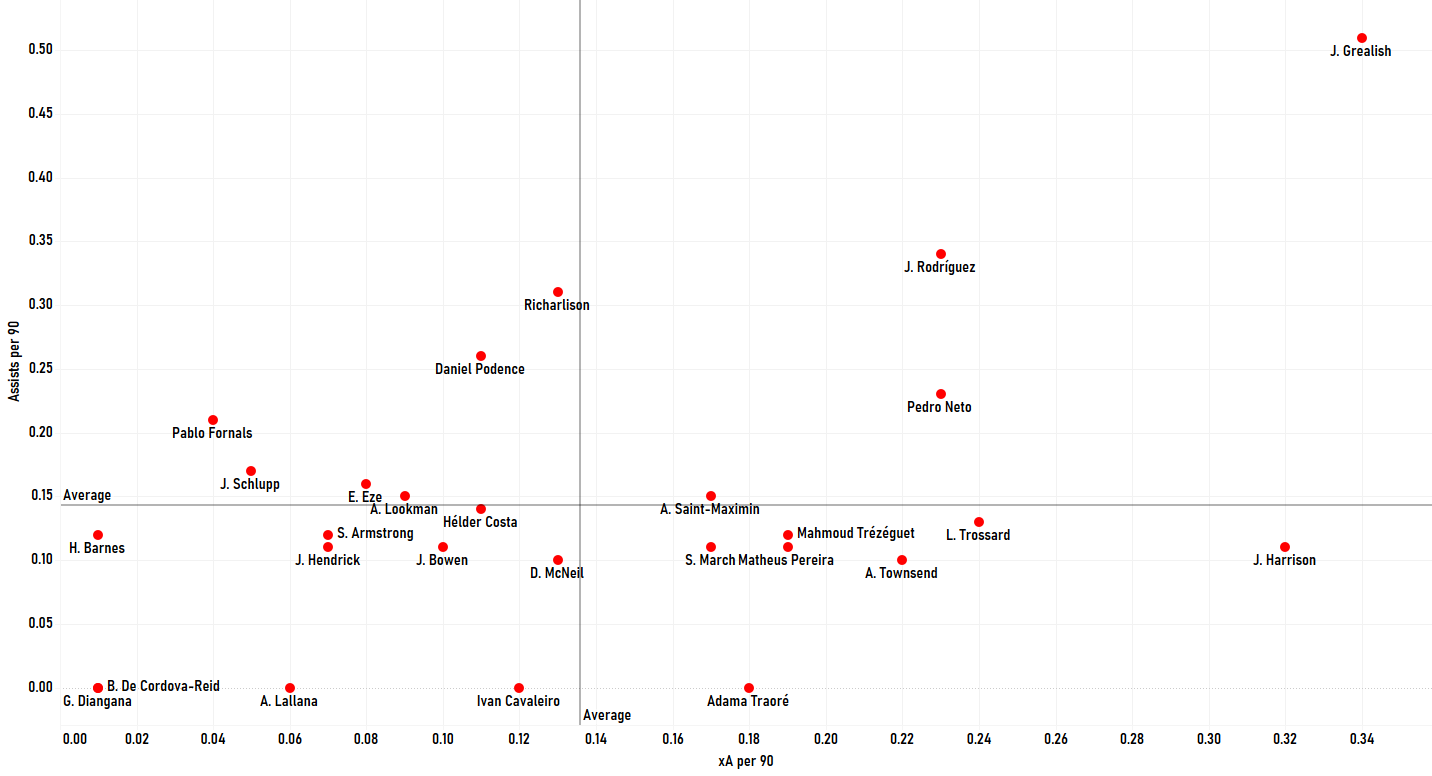 In the modern age of football, a winger’s role is no longer limited to picking out the centre-forward in the box. Wingers, with all their skill and agility, are now tasked with creating chances for themselves and their teammates almost out of nowhere and it is the best wingers that carry out this task consistently. In the above graph, we compare the assist statistics of the wingers to their expected assist data to identify the standout providers.

Aston Villa’s Jack Grealish is the outstanding performer in this metric, with the Englishman recording 0.51 assists per 90 or rather an assist nearly every two games. He also outperforms his expected assist statistic of 0.34 and is well ahead of James Rodríguez in second. The Columbian has had a good start to the season himself, recording 0.34 assists per 90 which is well ahead of his xA of 0.23. His teammate Richarlison has the third-highest assists with 0.31 per 90 and massively outperforming his xA per 90 of just 0.13. The Wolves duo of Daniel Podence (0.26 assists/90 and 0.11 xA/90) and Pedro Neto (0.23 assists/90 and 0.23 xA/90) follow, with the former having performed well above his expected statistic.

West Ham’s Pablo Fornals has also performed well in this initial phase, recording 0.21 assists per 90 despite an xA of just 0.04 per 90. Crystal Palace’s Jeffrey Schlupp (0.17 assists/90 and 0.05 xA/90) and Eberechi Eze (0.16 assists/90 and 0.08 xA/90) have also performed above average with Fulham’s Ademola Lookman and Newcastle United’s Allan Saint-Maximin completing the list of players above average with their 0.15 assists/90 though the former has outperformed his xA per 90 of 0.09 while the latter has fallen below his xA/90 of 0.17. 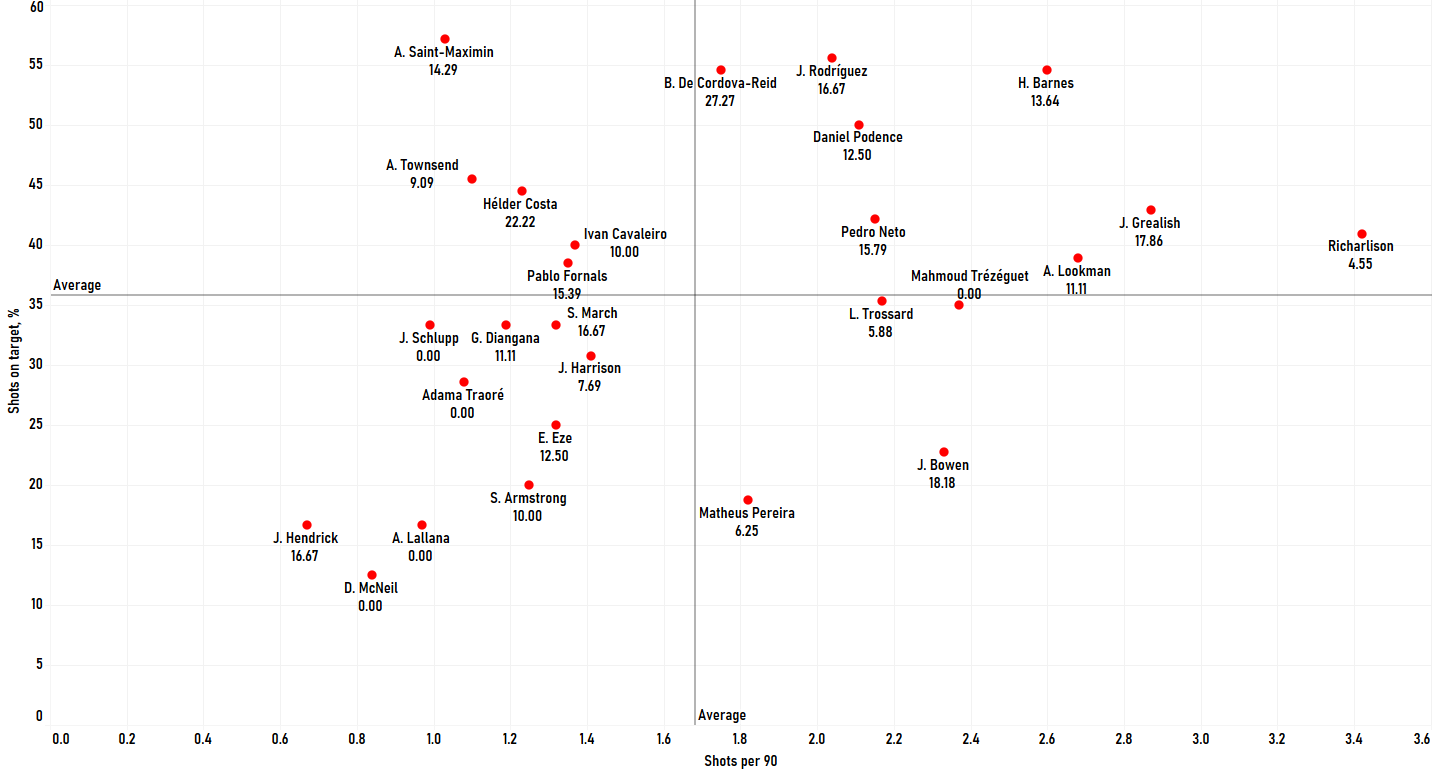 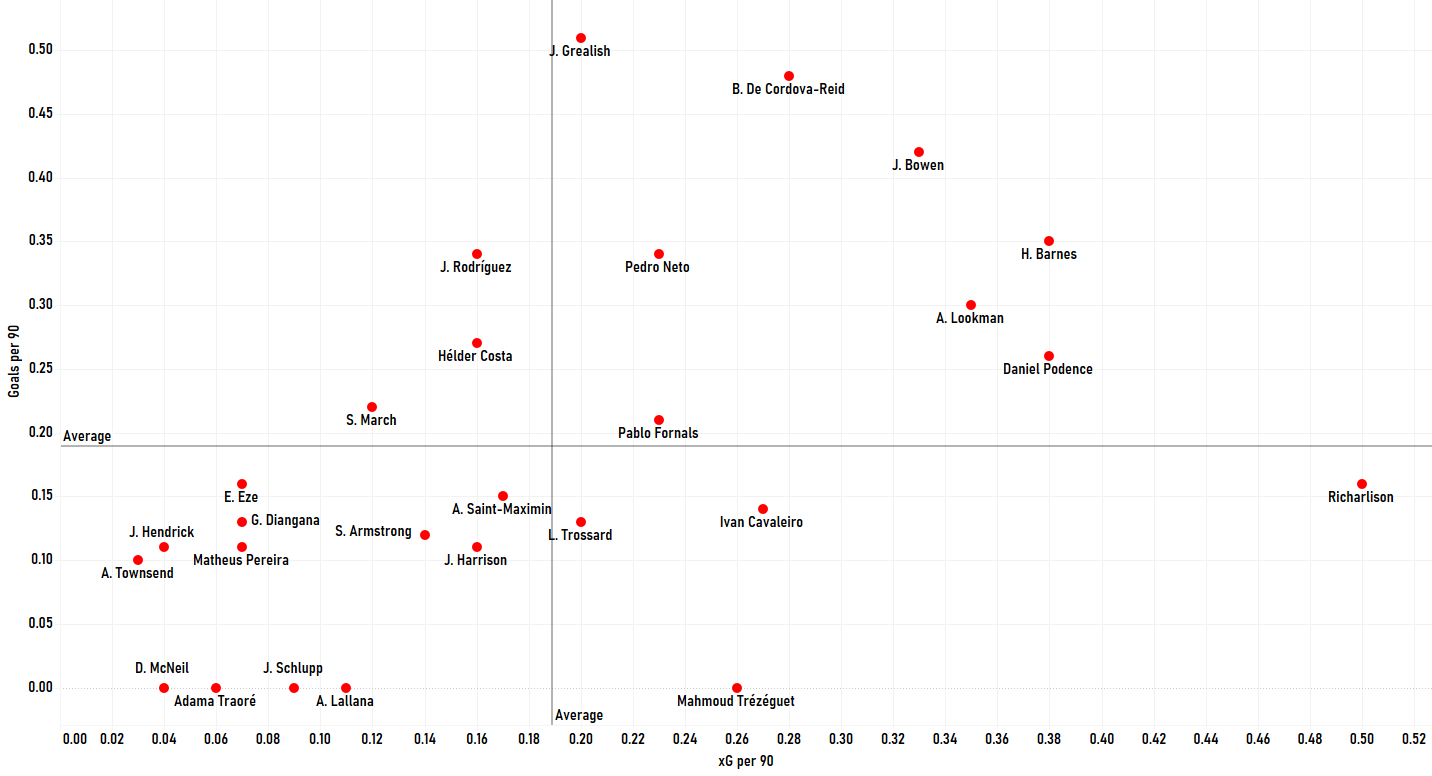 As always, scoring goals is an important benchmark by which any attacker is rated and in the above graph, we compare the expected goals per 90 metrics with that of the actual goals scored by the wingers. Grealish impresses once again, massively outperforming his xG per 90 of 0.20 with his 0.51 goals per 90. This along with his impressive assists statistic shows just how influential the Englishman has been for his side in the early stages of this campaign. Decordova-Reid has performed well as well, with his 0.48 goals per 90 well above his 0.28 xG per 90. Neto (0.23 xG per 90 and 0.34 goals per 90) and Bowen (0.33 xG per 90 and 0.42 goals per 90) are the remaining two players with above-average xG and goals per 90 to outperform their expected metric. 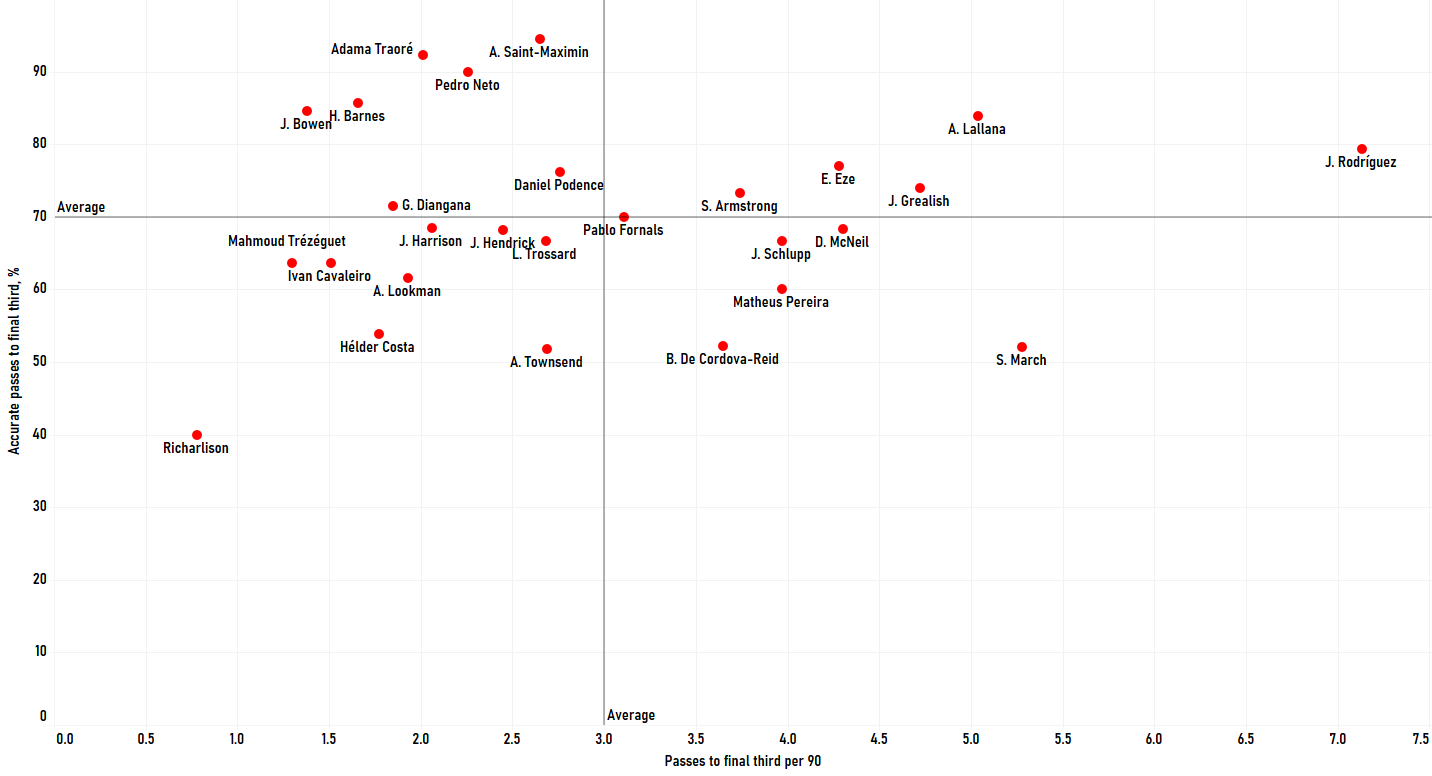 For the passing statistics, we will look to cover mainly the attacking nature of passes. To begin, we will look at the passes to the final third of the wingers. Rodríguez shines in terms of volume, making 7.13 passes to the final third per 90 with an accuracy of 79.37%. The Columbian is well ahead of March in second with 5.28 passes per 90 albeit with much lower accuracy of 52.08%. His teammate Adam Lallana is close behind though, having made 5.04 passes to the penalty area per 90 with much better accuracy of 83.87%. Grealish (4.72 passes per 90 and 73.91% accuracy) features well once again and we also see Burnley’s Dwight McNeil (4.3 passes per 90 and 68.2% accuracy) perform well as well. 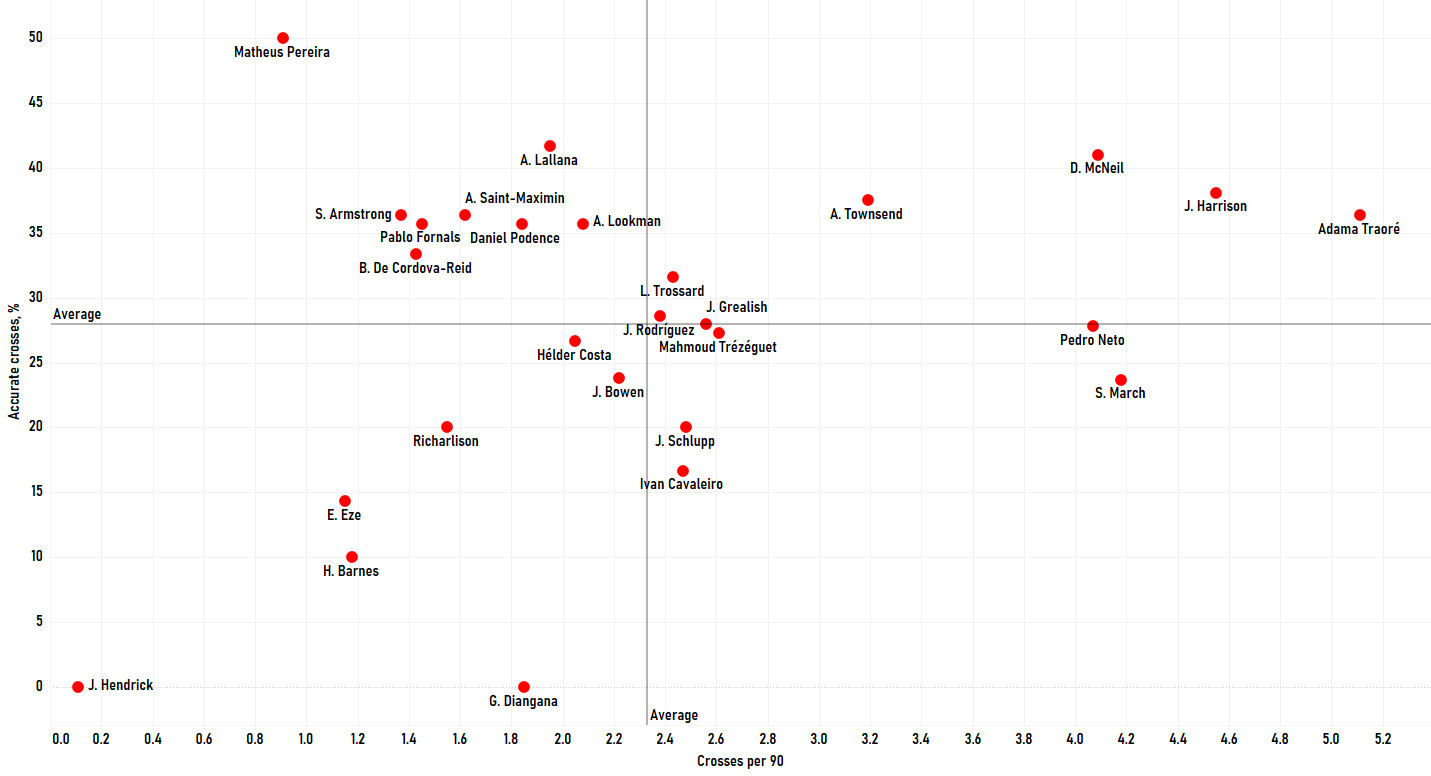 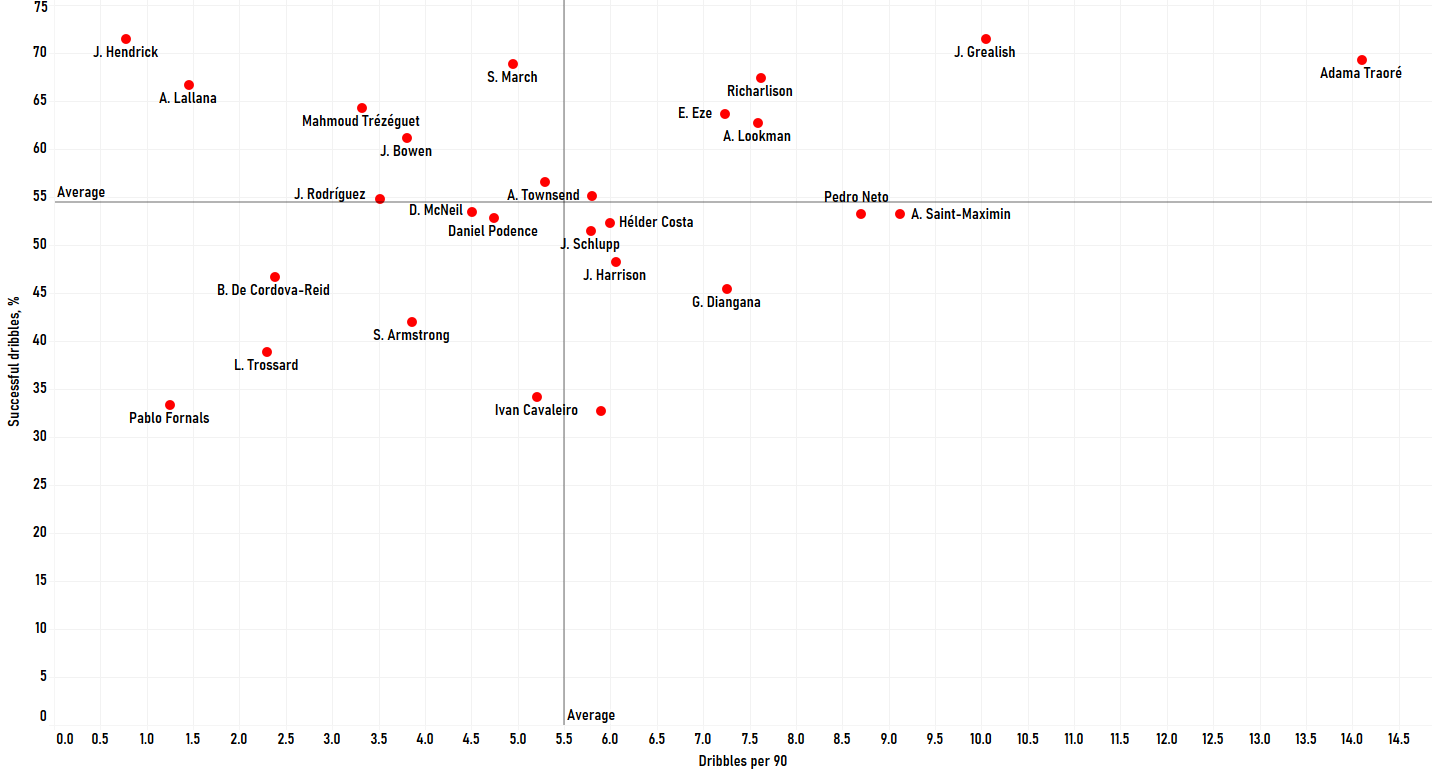 Eze and West Brom’s Grady Diangana have a similar number of dribbles per 90 as well although the former has a much higher success rate of 63.64%. Apart from them, Pereira has the lowest success rate among those with an above-average number having only succeeded in 32.69% of his 5.9 dribbles per 90. Harrison, Schlupp, Costa and Barnes have a similar number of dribbles as Pereira but fare much better in terms of accuracy with Barnes the only one above-average out of the four. 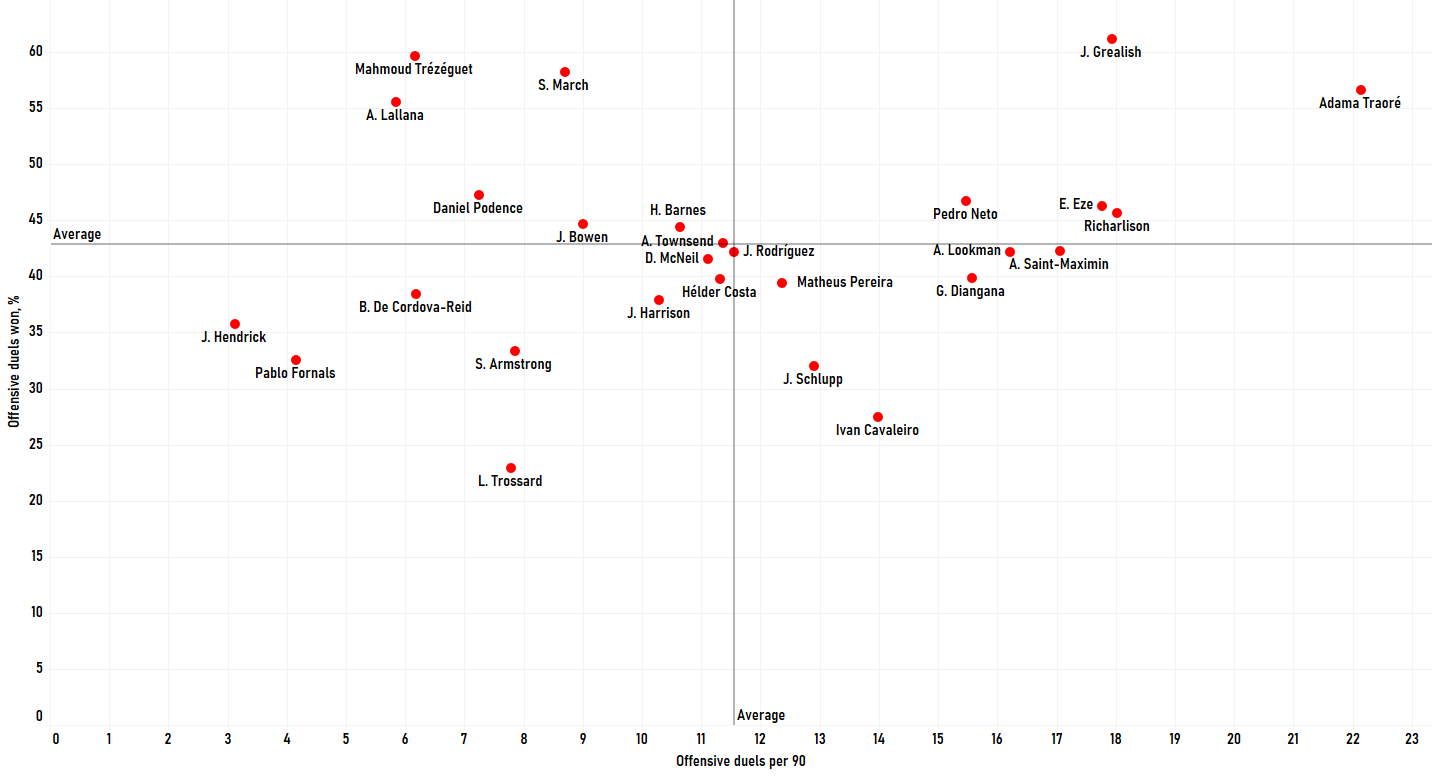 Having compared the wingers with the different data and statistics, we will now proceed to identify the standout performer among the wingers outside the “Big Six”.

While the top clubs have the financial backing and pull to lure the bigger names to their clubs, the clubs outside of the “Big Six” are no short on talent themselves. Through our data analysis, we have seen a range of players that have performed exceptionally in the opening stages of the 2020/21 Premier League season and interestingly, many of these players would cost a fraction of that of the players in the bigger sides. However, the clear standout performer is one that Aston Villa have recently slapped a 100 million pound price tag on and that is their captain Jack Grealish.

Despite being tipped to move away from Villa Park at the end of last season, Grealish helped his side stay in the top flight and signed a new contract heading into the current season as well. The Englishman has only gone on to fully establish himself as one of the best wingers in the league, having scored four and assisted a further four goals in the opening 10 games. Grealish was crucial to Villa’s stunning start to the campaign that saw them thrash the likes of Liverpool and Arsenal and if the 80 million pound valuation at the end of last season seemed too high for the bigger clubs, it has only gone up and yet with the winger just turning 25, it could still turn out to be a bargain. Aston Villa still have 28 games left in the season and with the start they have, they would be looking to battle for a top-half finish if not for a Europa League spot and with Grealish at the fore and in his current form, it could very well be termed possible.