How Liverpool overcame the 4-5-1 pressing of Chelsea

After a successful first leg in the Champions League quarter-final, Liverpool had the next big challenge at home. In the race for the Premier League, Jürgen Klopp’s team faced Chelsea. Maurizio Sarri’s team are slowly getting used to the playing style of the Italian coach and have put in good performances in recent weeks.

In particular, players like Ruben Loftus-Cheek and Callum Hudson-Odoi have been useful additions to the starting XI. They make Chelsea a more dangerous yet better-balanced team than before. Both players were also part of the starting lineup which Sarri used in his usual 4-3-3 against Liverpool.

Along with the two English national team players, Chelsea started with Kepa in goal. The back four included César Aziplicueta, Antonio Rüdiger, David Luiz and Emerson. As always, the position of the defensive midfielder was occupied by Jorginho, as the key player in Sarri’s system. He also seems to benefit from the addition of Loftus-Cheek. Along with N’Golo Kanté they have two dynamic players who play alongside the slow yet gifted Italian midfielder.

Against the strong Liverpool attack and the fact that Chelsea were playing at Anfield, Sarri decided to go for a lineup with fast players. They were tasked with attacking the spaces behind Liverpool’s backline. As a consequence, Willian on the right, Hudson-Odoi on the left and Eden Hazard in the centre seemed to be a reasonable choice. 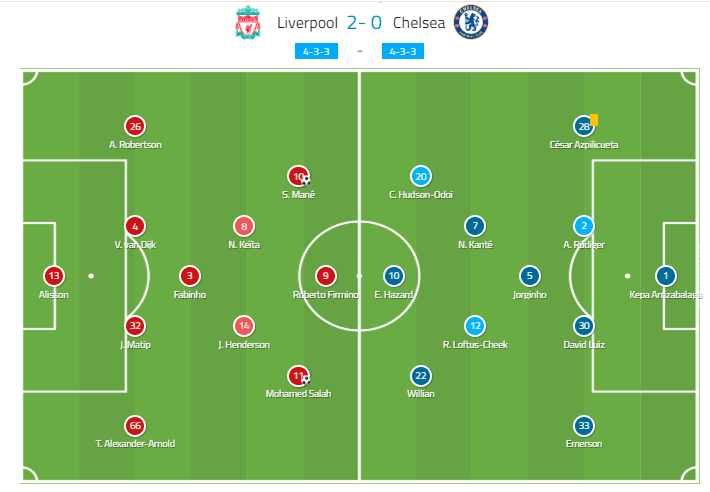 On the other side, Jürgen Klopp had to find the balance in terms of rotation. The game on Wednesday in the Champions League is as important as the game against Chelsea. However, he had to rest certain players after the game against Porto. As always, Alisson was the man in goal while Virgil van Dijk and Joël Matip were the centre-back partnership.

Both were supported by Trent Alexander-Arnold and Andrew Robertson on the flanks while Fabinho was the defensive midfielder supporting the build-up. Naby Keïta and captain Jordan Henderson were positioned in the half-spaces. While Henderson improved the deeper circulation, Keita acted much more vertically trying to break the lines or as an additional passing option between the lines.

Klopp didn’t rest his best players and picked Sadio Mané, Roberto Firmino and Mo Salah up front. The Egyptian winger was the crucial player in Liverpool’s 2-0 win. In the end, he not only scored one dream goal but was also involved in the first goal of the game.

Most of the time, Liverpool were in control of the game. They tried to build up from the back by moving the ball quickly and finding their best players between Chelsea’s midfield and defensive lines.

Fabinho and the centre-backs were responsible for the build-up while both full-backs could either stay higher or move deeper in order to function as additional passing options. Henderson and Keïta could join occasionally.

Chelsea tried to counter that by using a 4-5-1 against the ball which Sarri used during his time as Napoli coach. However, this time the shape was extremely compact, and Chelsea showed great discipline and communication. Liverpool struggled to find a way through the shape. Either they played long balls, or their passing just pushed Chelsea back in their own half.

In Chelsea’s 4-5-1, Jorginho was the central part of the five-man line in midfield. The Italian midfielder covered the open space when one of the central midfielders moved out of the line or he followed one of Keïta or Henderson. Consequently, Jorginho didn’t have to cover that much ground, which helps the Italian to survive in the Premier League.

One reason could be the defensive quality of Loftus-Cheek. The English midfielder is great at pressing and using his body shape to close passing lanes while Kanté can cover more ground and intelligently adjust his position. The other reason, and probably the more important, was due to the line-up of Liverpool.

While Keïta is an extremely dynamic player who possesses great attacking talent, Henderson is more of the pass-first player who structures his team. Therefore, Chelsea could risk leaving him open or letting him get occupied by Jorginho while Kanté was constantly deeper to have an eye on Keïta.

Kanté could press Fabinho when Jorginho was positioned deeper and Loftus-Cheek pressed the centre-back. Normally, Hazard’s task was to close the passing lanes to Fabinho. The Belgian midfielder usually just covered the six space, but was not really involved in defensive work.

In the second half, Chelsea tried to press higher, and therefore changed the shape into a 4-1-4-1 with Jorginho clearly positioned deeper. Although Chelsea could apply more pressure on the build-up of Liverpool, they also offered spaces next to Jorginho which the Italian midfielder couldn’t cover on his own. Consequently, Liverpool found more space between the lines in the half-spaces.

The problems of being positioned too deep

As I already mentioned, Chelsea often got pushed back into their own half. There, they defended in their 4-5-1 relatively close to the edge of the box, giving Liverpool a lot of space behind and around Hazard. Due to that deep shape, they were compact around the box giving Liverpool a hard time to break the lines.

The yellow marked space which was uncovered by Chelsea helped Liverpool to move the ball easily and attack the open spaces on the far side. It was harder for Chelsea to take the ball away from Liverpool’s midfield and counter-attack with multiple players.

As a consequence, Chelsea usually used long balls to access their fast wingers and Hazard behind the Liverpool backline. However, over the course of the game, Chelsea got pushed further back and weren’t able to apply pressure on Liverpool’s attack. Along with the central midfielders, the striker and winger occupied the space between the lines. Consequently, Chelsea had to open the wings in order to stay compact enough in the centre.

Both goals originated on the wing with Salah getting diagonally between the lines. Chelsea couldn’t defend against that properly anymore. In the example above, Mané and Firmino were able to occupy the whole back four.

This meant that none of the defenders could step up to press Salah, Keïta and Henderson once they got the ball without risking leaving themselves exposed. However, Chelsea were compact in the centre to close the passing lanes, but the flip-side was the open wing which Liverpool used to get behind the lines and into the box.

Liverpool and their counter-pressing

We could already see that Chelsea’s main goal was to counter-attack quickly by using long balls behind the last defensive line of Liverpool. This was only possible due to the players lined up by Maurizio Sarri and the fact that the counter-pressing of Liverpool wasn’t on point.

Due to the high position of both central midfielders, Liverpool couldn’t always close the available space quickly enough to stop Chelsea. Especially next to Fabinho, Chelsea found space which they could exploit.

The advantages of Sarri’s playing style are the close connection between the midfielders and the fact that the Italian coach improves his players under pressure. Therefore, Chelsea was capable of playing out under pressure.

Due to the fact that Liverpool switched sides often, Chelsea regained a lot of possession on the wings. Consequently, they could exploit the centre diagonally by switching from the wing to the near-side central midfielder who moved forward into the open space next to Fabinho.

However, Chelsea struggled to actively create chances out of the long balls. Because of the deep positioning of the midfield block, they often attacked with fewer players, and Hazard, Hudson-Odoi and Willian weren’t able to create real chances against Liverpool’s defenders.

Overall, Liverpool were the dominant side. Their ball circulation wasn’t perfect, but they stayed calm, moved the ball and tried to exploit the holes in Chelsea’s defence. In the end, the diagonal attacks of Salah and the ability of Klopp’s players to control the ball even under pressure made the difference. The way the game evolved with two goals in two minutes was beneficial for the Reds.

Chelsea, on the other hand, can be satisfied with their performance. In a rough first season under Sarri with a lot of ups and downs, they seem to be understanding the philosophy of the Italian coach better. With Sarri finally including the talented youngsters Loftus-Cheek and Hudson-Odoi, it is going to be interesting to see how Chelsea develop next season.