Were there weaknesses to be found in Manchester City’s controlled demolition of Crystal Palace?

City almost had a training session for the first half on how to break down a deep block, and Guardiola will have been pleased with what he saw. In this tactical analysis, I will show how they were able to exploit Palace’s deep block and how a key trend in Manchester City’s build-up could potentially be used against them in the future.

City lined up with a 4-2-3-1, which is of course very flexible depending on situations on the pitch. This flexibility allowed for them to easily create overloads and get behind the lines, which is a key area of their play I will touch on. Crystal Palace opted to play a 4-1-4-1, with a clear focus on compactness and trying to limit this space between the lines. 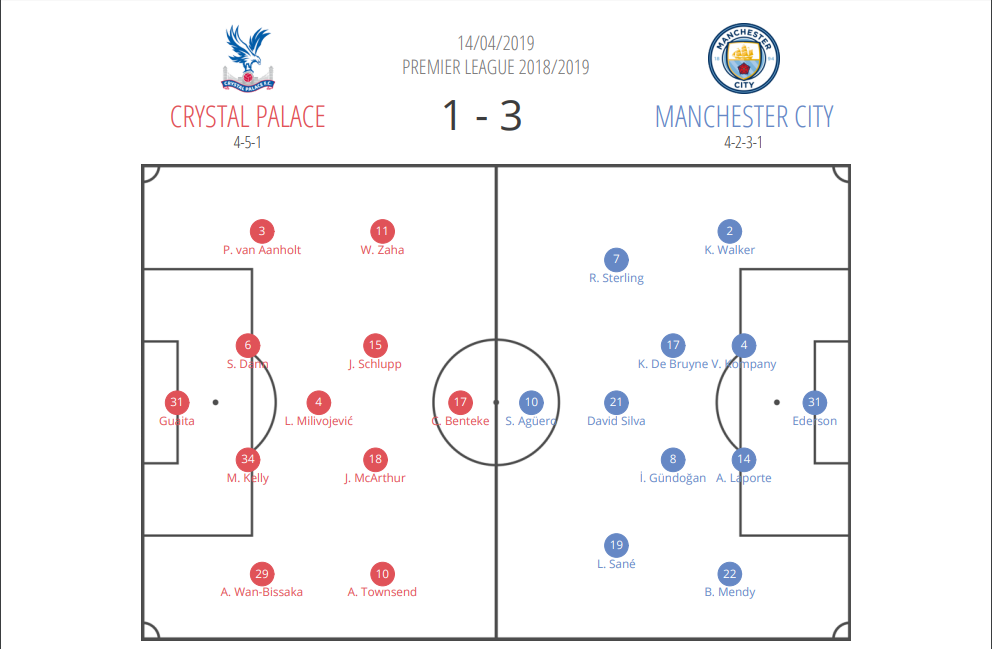 Pep Guardiola and Man City are famed for being able to create and play in pockets between the lines of the opposition, and so it was naturally disappointing to see Crystal Palace’s ‘compact’ shape in the game. As mentioned, Palace opted not to press City and were instead focused on maintaining their rigid 4-5-1 shape. However, if City are given the time and space in the opposition’s half with their desired players, they are capable of breaking any side down, no matter how ‘compact’ they are.

Below we can see an example of City being given time inside the home side’s half. Here, they have three players in the central pocket between the defence and midfield, with Sterling out wide in lots of space due to the central overload. Because of the timing of the run from David Silva to not be waiting in the pocket to receive, but instead arriving to receive, and because of the weight and quality of the pass from Laporte, the away side are able to play a straight ball through Palace’s midfield block.

The lack of any form of press also doesn’t help Palace in these kinds of situations. Since they are so flat, it is difficult to cut any angles and force City to play around them rather than through them as they do here.

Again, below we can see David Silva and Sergio Agüero dropping into this space again to receive the ball and turn, but this time Benteke’s press prevents the ball from penetrating the block as angles are eliminated.

The positioning of Man City’s full-backs was vital in creating space for their midfield and allowing them to exploit spaces within Palace’s block. Guardiola employed a system that saw his full-backs playing differently depending on the characteristics of the players with them.

On the left side, where most of Man City’s play originated from, Mendy positioned himself very wide, as did Leroy Sané, meaning space could be opened up for Agüero and Silva to drop into. Here we can see Mendy very wide, while Agüero and Silva stay central. Mendy’s width and one-on-one ability force McArthur to shuffle across, again creating more space centrally.

Because most of City’s play was focused on the left side of the pitch, Kyle Walker remained narrow, drawing Zaha closer to him and away from the wide areas, while Sterling remained wide and looked for switches in play. Walker’s narrow position helped to both create space for Sterling out wide, but also gave him a good starting position to counter-press from and win the ball back if lost.

Another example of Walker’s positioning can be seen below. If Walker pushes higher and wider, Zaha would naturally just drop, as would Van Aanholt, which would decrease the space available to Sterling. Notice how Man City’s left side take up similar positions to each other as said.

A potential weakness in City’s build up

Although this was not a weakness in this game and was, in fact, a strength, in the future teams may be able to identify and exploit this trend in Man City’s build-up play. As stated throughout this piece, the simple trend is that Laporte builds the majority of Manchester City’s attacks. If Kompany receives the ball, more often than not he distributes it across to Laporte, as he is much more potent in attack.

If teams were able to eliminate City’s option of their clearly favoured way of building attacks, then teams would have more success in recovering the ball. This could be done by blocking the passing lane to Laporte and opening passing lanes to Kompany before pressing him, or by aggressively pressing Laporte and not allowing him the same time as Palace did in this game.

This, of course, would require a high, whole-team press which Crystal Palace didn’t choose to utilise. But if teams like Liverpool and Tottenham can remove Laporte from City’s build-up, an increase in turnovers in City’s half could occur. Below we can see that if Benteke cuts that passing lane and Palace as a whole move higher and press, City would be forced to adjust themselves and play through Kompany, who can struggle in possession.

At times the game resembled an almost fixed practice for Manchester City, where they simply recycled possession to Laporte and started again. With no pressure, the Frenchman was able to pick out players in pockets of space easily.

Palace’s negative approach meant that few chances were going to be generated for them, and when Man City made one mistake, they were punished. After that, City dominated the game and quickly got a goal on the counter-attack to ease the nerves of their fans and make Liverpool fans switch off their televisions.

It would be encouraging to see more teams actually get at and try to press Man City, particularly those with little left to play for. When they are pressed, City can become vulnerable quickly. Nevertheless, with the kind of quality they demonstrated on the ball, teams may be afraid of committing too many players forward.